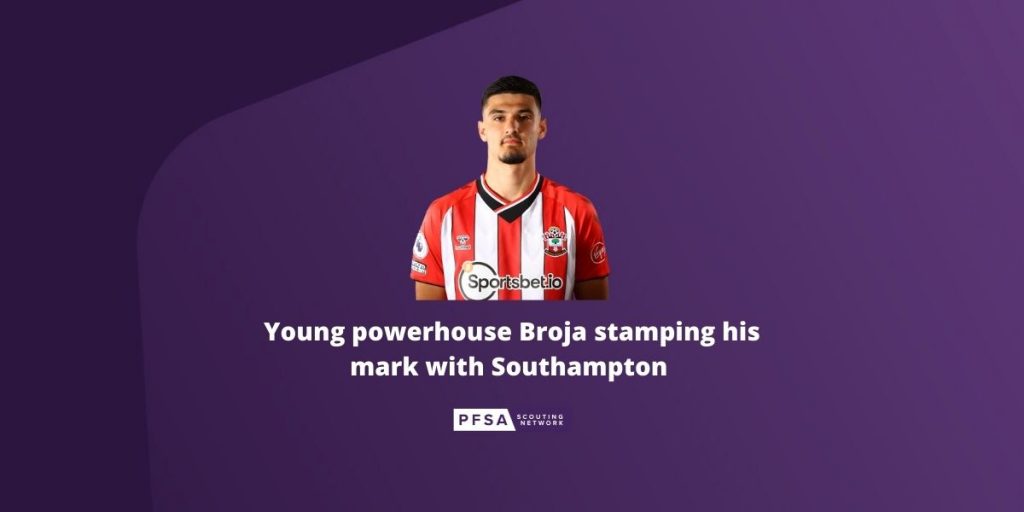 Making waves in the Premier League for Southampton, the way Armando Broja’s adjusted to the highly demanding division has been nothing short of remarkable.

Knowing he’d be struggling for action if he remained at Chelsea due to the heavy competition for places, he relished the chance to join Southampton on loan. Having already bagged seven goals in 20 appearances for the Saints, the highly rated Chelsea academy product has thrived working under the tactically astute Ralph Hasenhuttl, who’s got an exemplary record developing young players.

Proving a nightmare for defenders to handle across the country, Broja’s power, physicality, athleticism and finishing have ensured he’s a real handful.

Following on brilliantly from his loan in the Dutch top flight last campaign with Vitesse, where he scored 11 goals in 34 appearances, the Albanian international’s finishing has continued to serve him well.

Showing how clinical and instinctive he is, Broja’s certainly not afraid to unleash his shots when in range. By often shooting on sight, this keeps defenders and keepers guessing and can often lead to panic, which can result in errors and promising rebounds.

Broja’s found joy with some crisply struck placed finishes, powerful efforts and when placed in 1v1s with the keeper too. Moreover, the towering 191 cm marksman’s heading prowess has been a weapon, for he rises nicely to meet the ball with bravery and balance. Exhibiting composure and confidence despite his tender years, such traits bode well that he can progress into an elite finisher in the years to come. 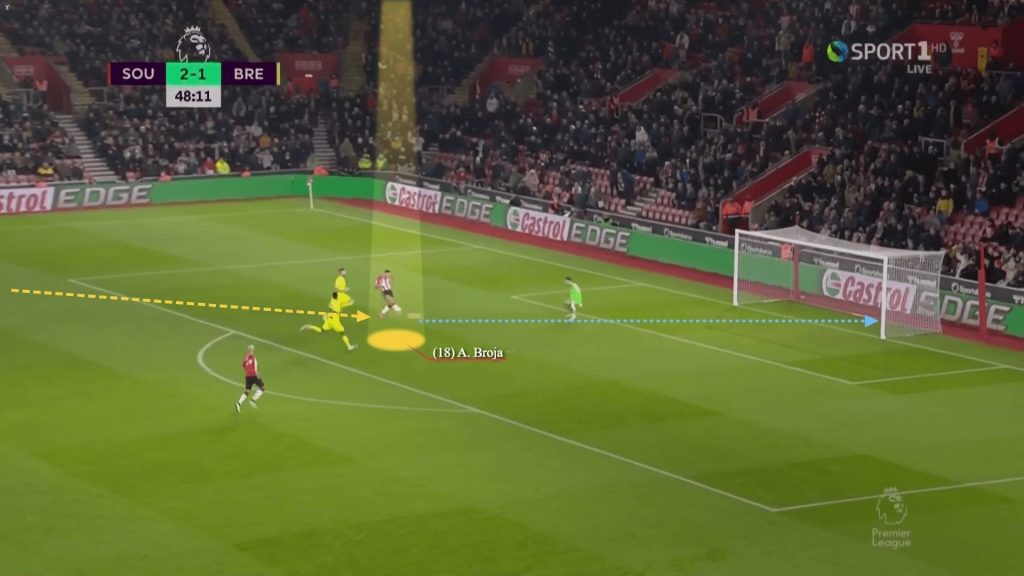 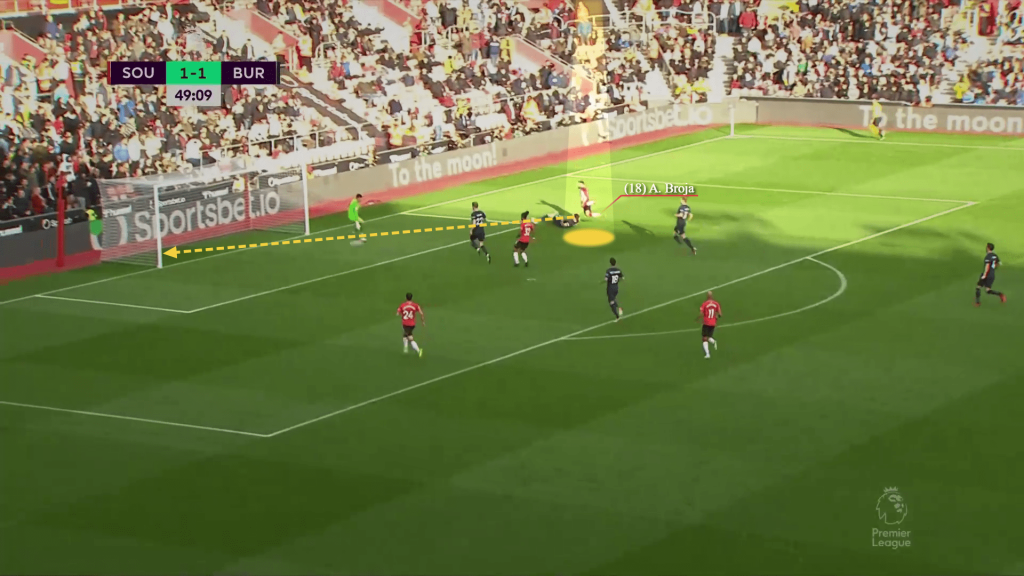 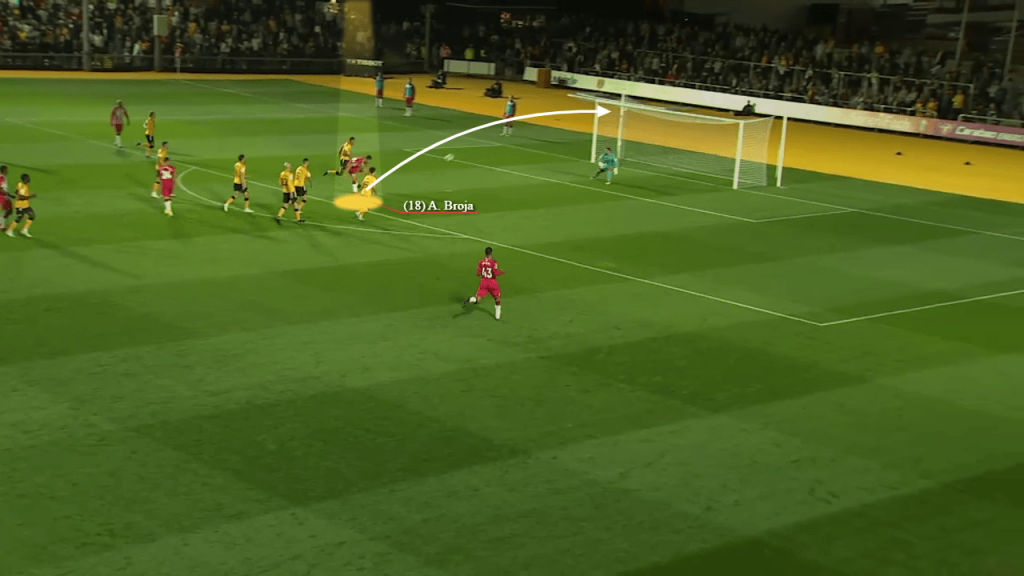 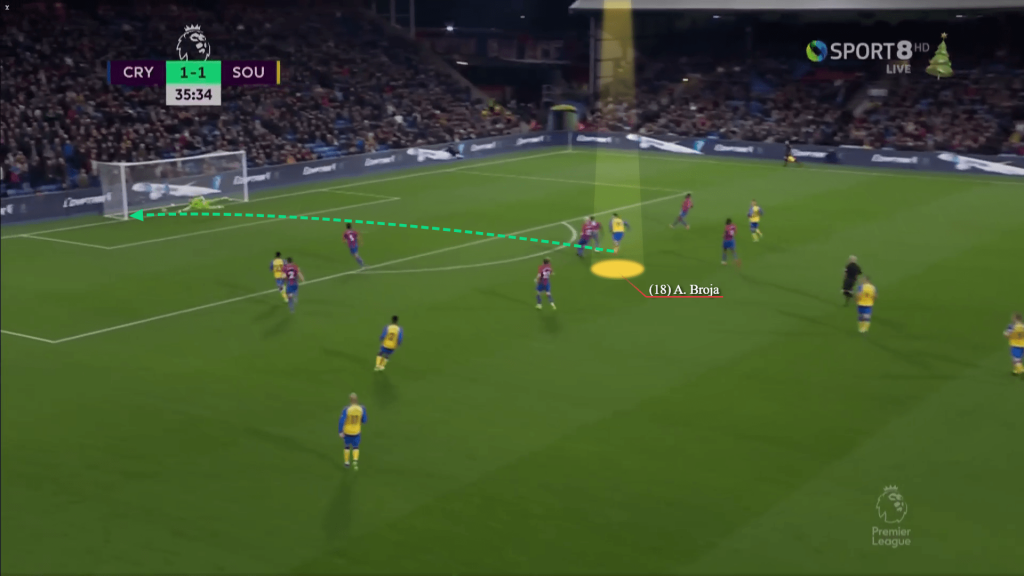 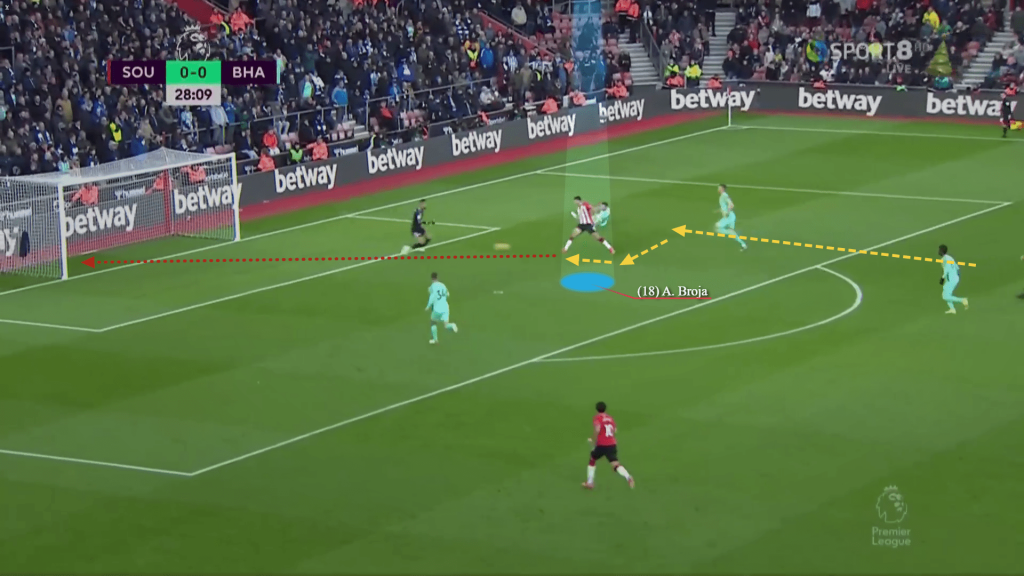 Even though he knows there’s room for improvement here, considering he’s still just 20, all the signs are very positive indeed for the man who can score with both feet and via headers.

Supplementing the aforementioned with his movement, and this is definitely a key string to his bow, for he offers his team directness and a fine threat in behind both in slower methodical build up or transition. Explosive off the mark and sharp at changing direction, this, in combination with his clever run angling and timing, helps him gain crucial separation.

Alert to gaps between defenders, plus alert to when the channel opens up behind a fullback, if he can peel off the shoulder of the last man, exploiting the blindside and using dismarking moves (like pushing off his man and zig zag movements to unbalance foes), this adds to his worth. Attacking vacant spaces with clarity and intent, he offers teammates like pass master James Ward-Prowse a fantastic option to utilise. 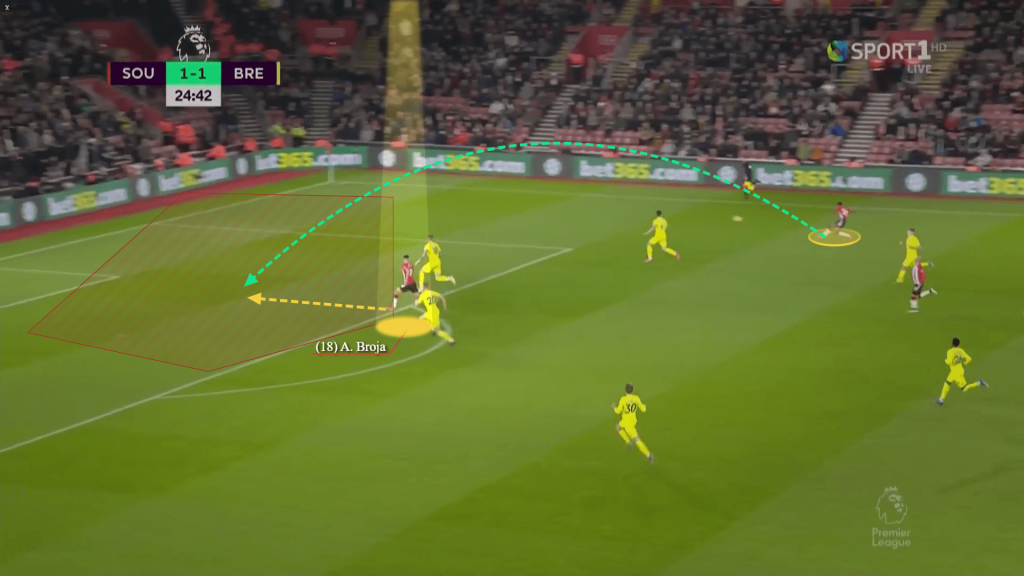 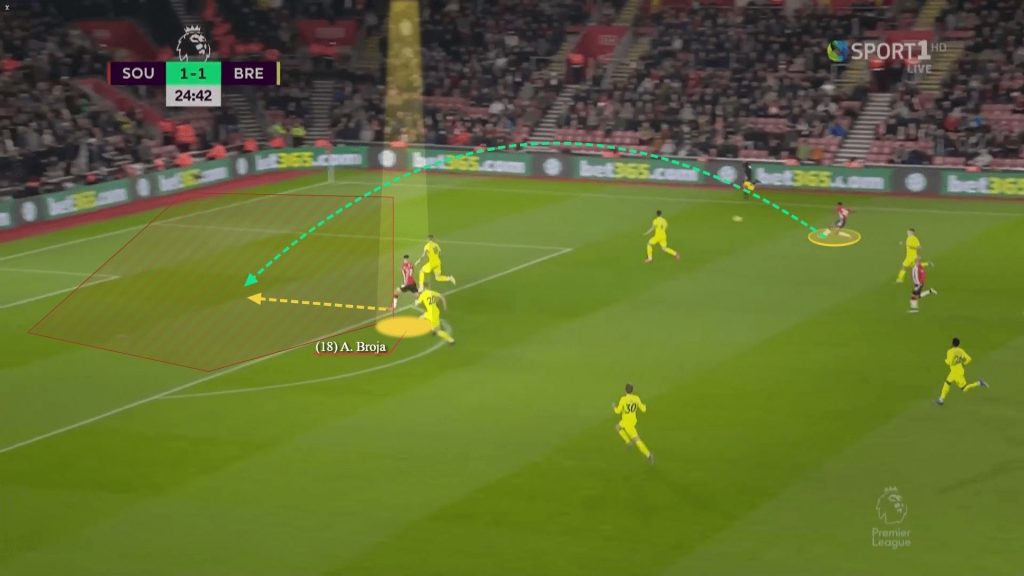 Although he can refine his craft when he drops deep with his back to goal, he’s still decent at holding up the play using the strength in his arms and legs and picking when to come short into unoccupied spaces between the lines.

A key byproduct associated with the above is how it facilitates opposite movements, where a teammate will surge in behind upon seeing him drop deep, which draws his man with him, thus enabling them the freedom to charge ahead. 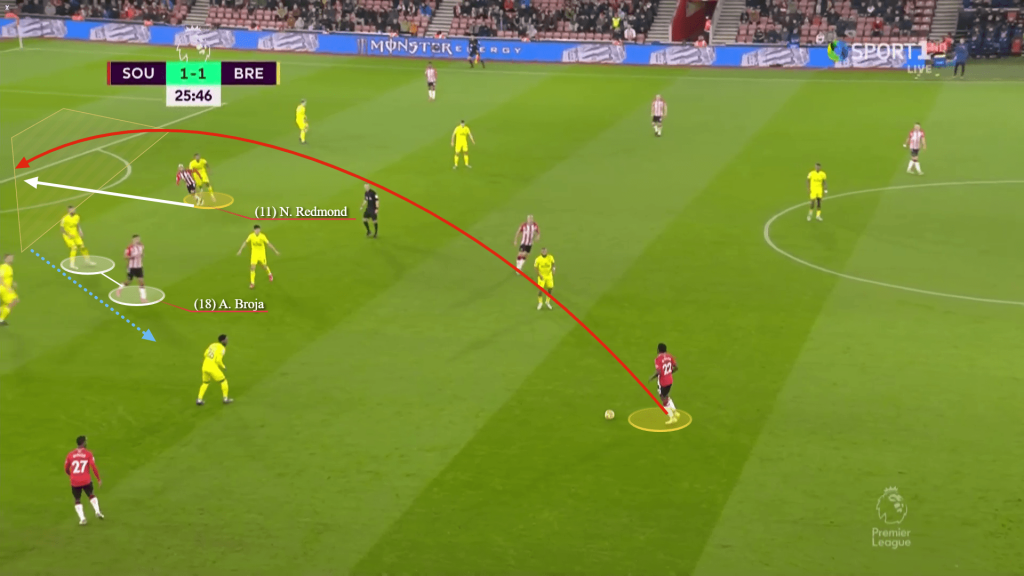 Moreover, if Southampton need to go long, his presence has been vital due to him offering a great target for goal kicks or long balls upfield. Able to either win headed knock downs or flick ons to help his team cause danger from second balls, plus posing a threat from set pieces on either end, Broja’s been a quality reference point. 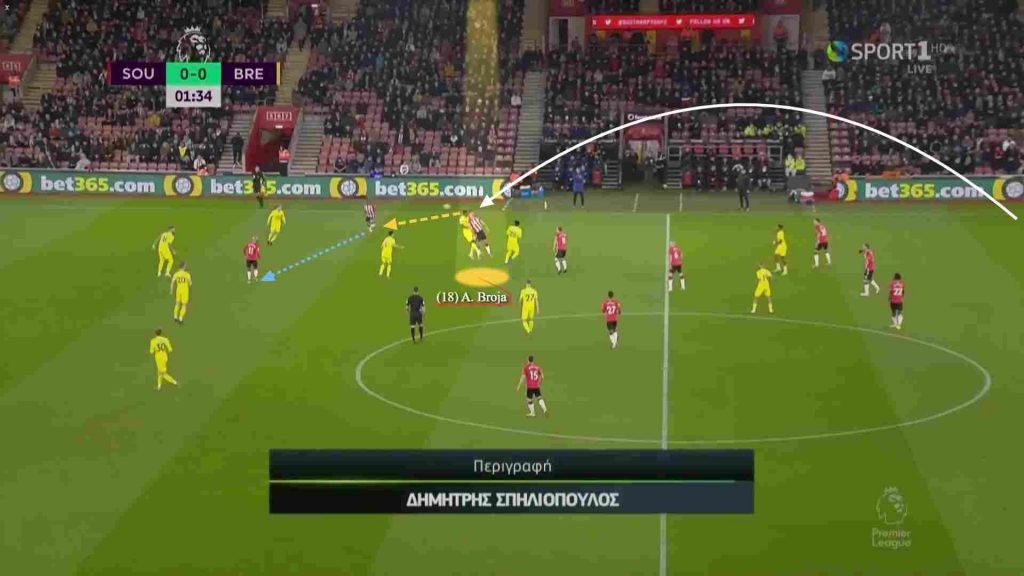 Smart and showing good awareness when rotating wide or with his fellow forward, plus when finding openings inside the area to apply finishes or make room for colleagues, these attributes add to his worth.

Technically competent and comfortable with the ball at his feet, his touch, power and control help him to embark on tidy dribbles, maintain possession under duress and hold the ball up 1v1 while waiting for a viable option. Effective at gaining space to shoot or outfoxing opponents with subtle shimmies and changes of pace and direction, defenders are given something else to think about with his ball carrying.

Handy at finding teammates with his passing, Broja’s shown his prowess here on many occasions, with him finding colleagues with neat lay offs, cutbacks into the box, enticing crosses and measured through balls. Considering he only averages 12.62 passes per 90 and typically receives in populated zones, it’s admirable how he still creates and helps Saints retain possession. 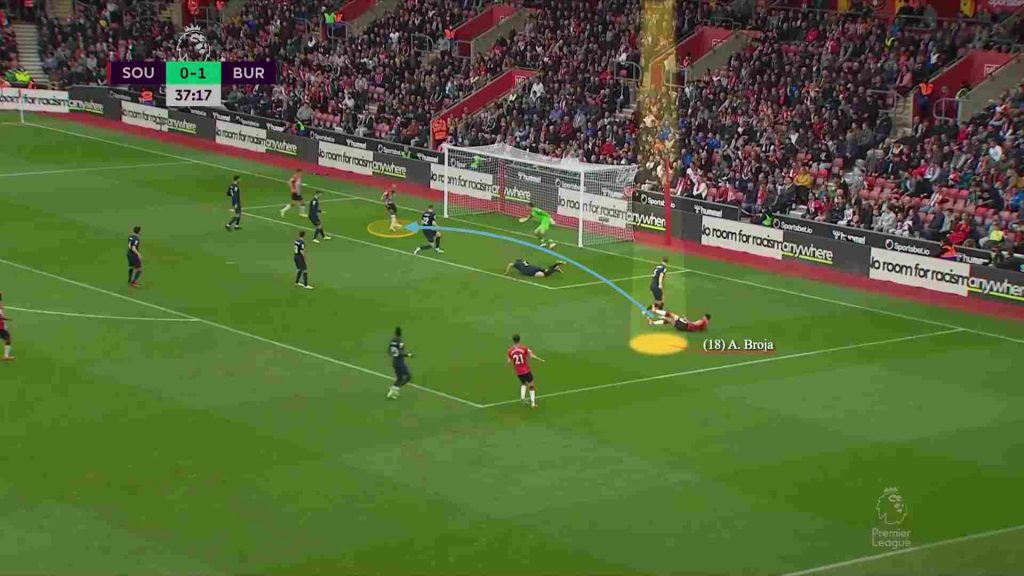 Contributing immensely and able to hurt adversaries in many ways, it’s understandable why Southampton are extremely keen to sign him on a permanent basis.

His teammates clearly rate him highly too, with Ward-Prowse recently praising the gifted Broja after the Crystal Palace clash. “I think he had a bit of a slow start but week by week he’s gradually grown I think as a person. He’s very confident around the place which is great. He’s a young guy. We’ve got a few really young lads playing together tonight which is great to see and he led the line well.

“He’s a good physical presence, he can run in behind, hold the ball up, he’s got great technical ability and took his goal really well.”

Chelsea manager, Thomas Tuchel, is a fan as well, which could complicate Saints’ chances of securing his services. “Armando’s getting better and better, he’s a very unique player with unique strengths in his game – he has speed, he’s robust and he’s a goalscorer,” Tuchel stated.

With reports suggesting Newcastle United have just put in a £40 million bid for him, it looks like a decision will have to be made soon regarding his future. A man in demand and with the world at his feet, joining Southampton on loan has certainly been a master stroke for him.

Choosing the next step in his career looms as an even more important decision for the multidimensional striker, though.