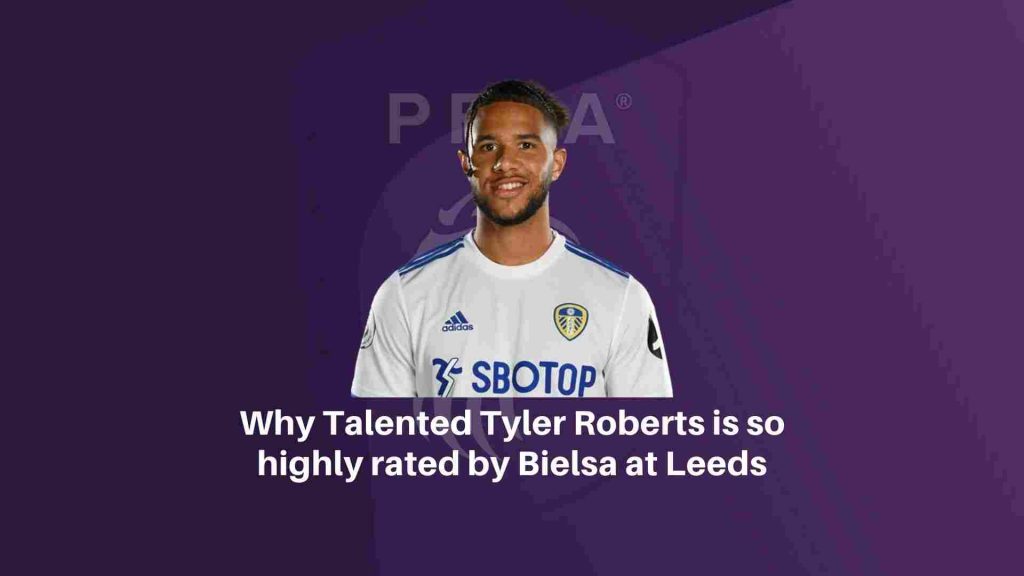 The future of Tyler Roberts has been a topic of hot discussion recently, with reports suggesting the Leeds United attacker has turned down the new contract offered to him.

With Steve Bruce’s Newcastle United rumoured to be interested in the man who’s got a year remaining on his contract, Roberts certainly has a tough decision to make.

Seeing as coach Marcelo Bielsa is a big fan of the Welsh international and wants to keep him, it’ll be intriguing to see how the saga unfolds. The Athletic’s Phil Hay offered his insight into the situation, stating: “I’ve always felt that he’s a player with talent, and I think Leeds have thought that as well.

“Bielsa obviously likes him and obviously rates him. But it’s a big period for him now, because he’s going to have 12 months left when they get to the summer. If Bielsa’s staying, he’s surely going to be one of them he’s keeping hold of.”

While he’s struggled with inconsistency and many have questioned his lack of output over his 27 Premier League appearances, as he’s only got two assists and one goal this term, there’s no doubting his quality when on top of his game.

Considering there’s plenty of options for Bielsa to choose from at Leeds, this hasn’t helped him gain vital continuity, for 13 of his 27 outings have come from the bench.

It also isn’t entirely fair to judge him purely based on his production, as he’s actually been playing pretty well of late, producing many solid showings and underlining the quality he has.

Offering his Argentine manager so much tactical flexibility due to his ability to play all across the attacking midfield line and even as a striker or a false nine, he’s certainly a great asset to have in the squad.

Skillful and very good on the ball, Roberts’ technical gifts serve him with a fine platform from which to undertake his work. So comfortable on the ball, his first touch and nifty control allow him to inherit possession cleanly to deal with high pressure situations. From here, he can then weave out of danger or beat his foes using wicked changes of pace and direction, smart shimmies and deceptive shoulder drops.

Remaining aware of his surroundings courtesy of his head scanning, this ensures he has a good mental imagery of his surroundings so he can assess his options and decide what best to do. This means he knows if he can turn and dribble upfield, needs to protect the ball or when a teammate can be found in a better position.

Possessing a good range of passing and plenty of creativity, his passing is another great weapon in his armoury. Adept at combining intricately in close quarters with smart one touch lay offs and flicks, his link play is certainly a highlight. In addition, his ability to slide in teammates with neat through balls, pinpoint them with cutbacks and hit penetrative line breaking passes has added to his worth. 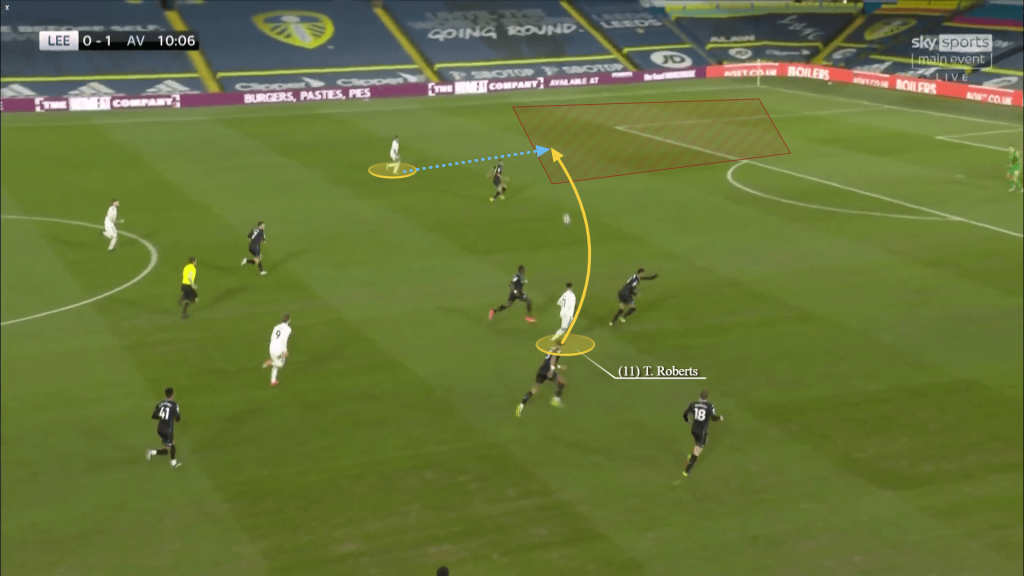 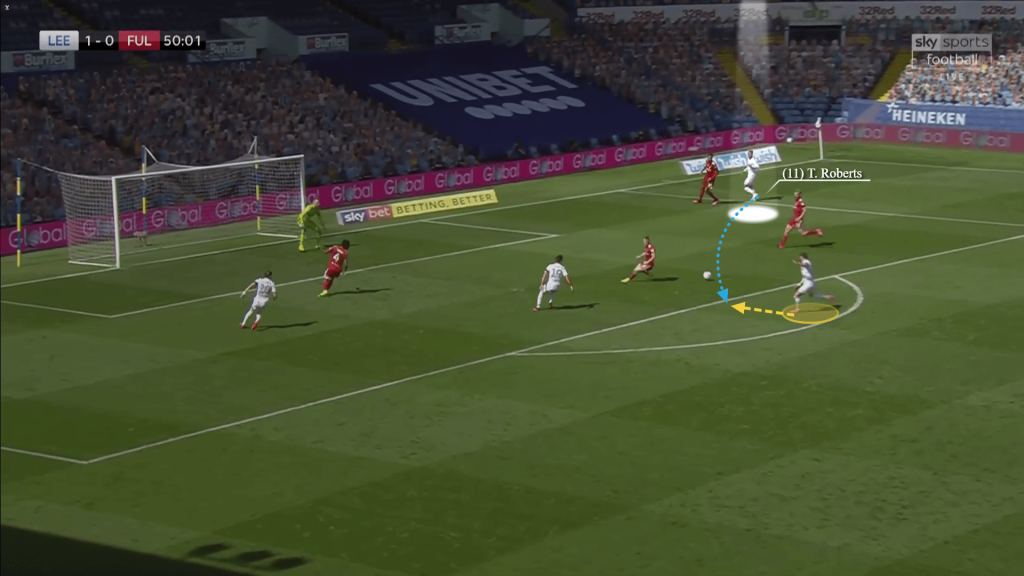 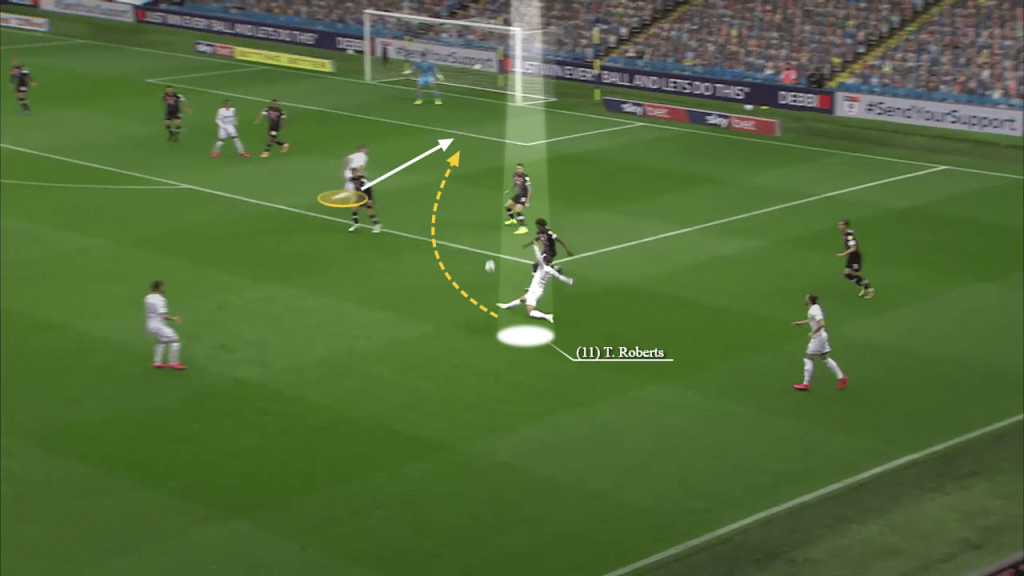 Supplementing the above with his clever movement, he’s astute at identifying and exploiting gaps in opposition structures to receive. Timing when to make his move, he’s a tough man to keep tabs on, with him especially impressive when dropping deep to connect play. Always eager to target spaces between the lines and in the half spaces, he evades markers expertly to be a top outlet for his teammates. 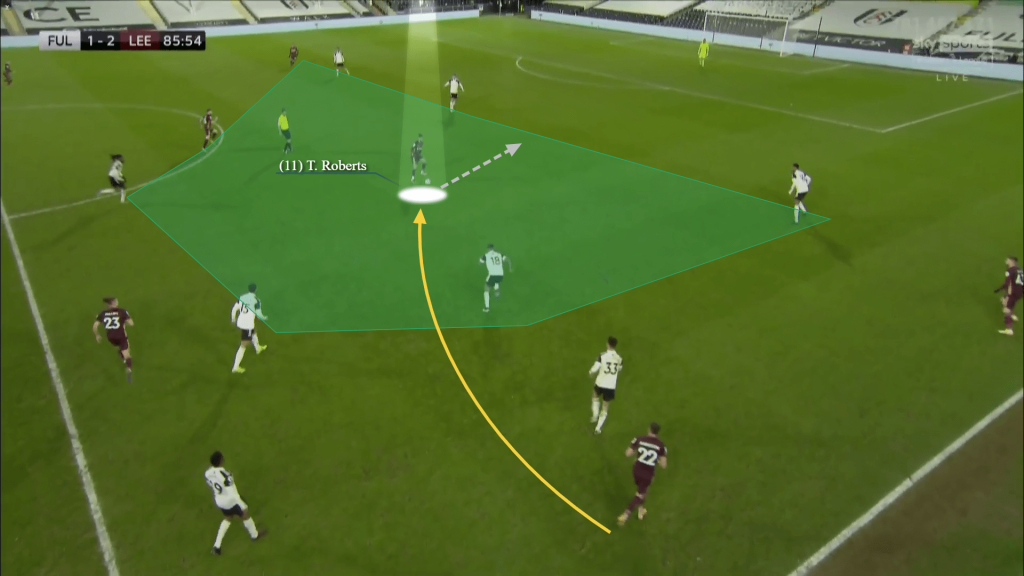 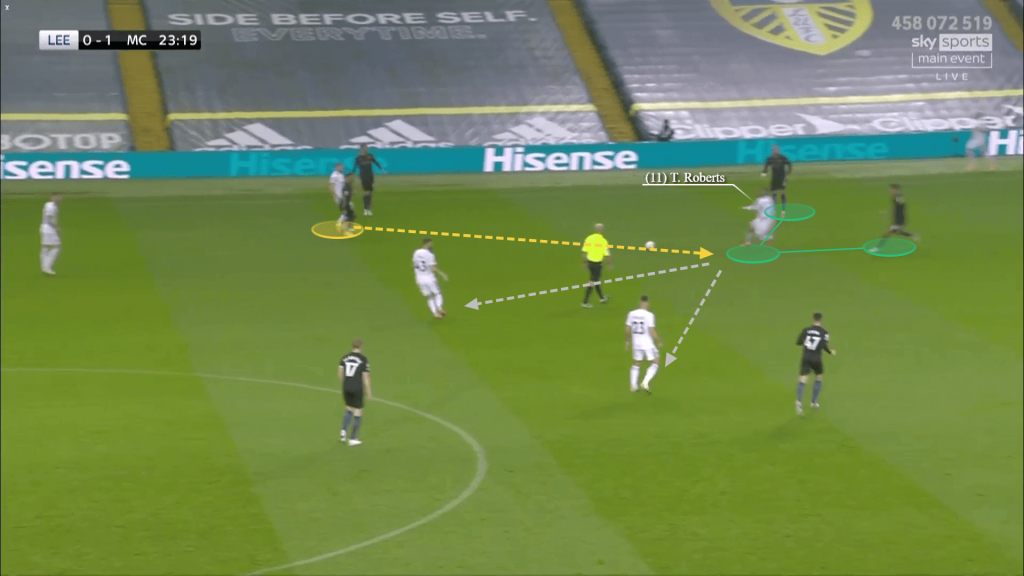 It’s been good to see his knowledge of when to go has helped his team create overloads to ensure progress up the field can be smooth while destabilising defensive units. Compounding issues for his adversaries by executing coherent rotations with his teammates, a key tenet of Bielsa’s philosophy, this is another avenue Leeds and Roberts use to unlock backlines. 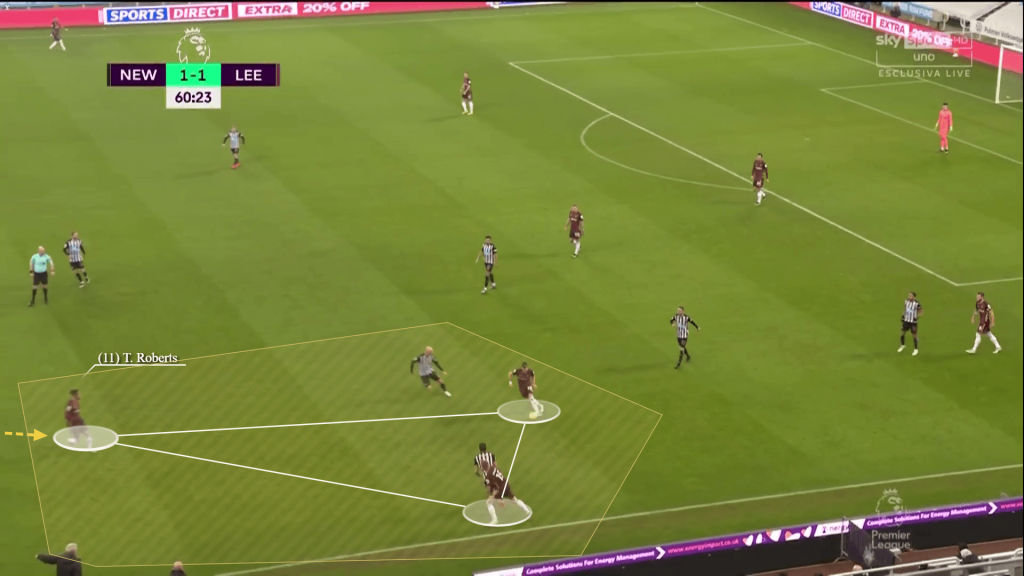 Whether pushing out wide, switching with his forwards or alternating roles with his midfielders, his versatility ensures he’s comfortable switching positions regularly throughout matches.

It’s also been important to note how he can make crafty runs in behind and down the channels to amplify his menace. Being awake of spaces and a top timer of his runs, this, in combination with his turn of speed and reading of the play, sees him embark on some damaging depth runs. 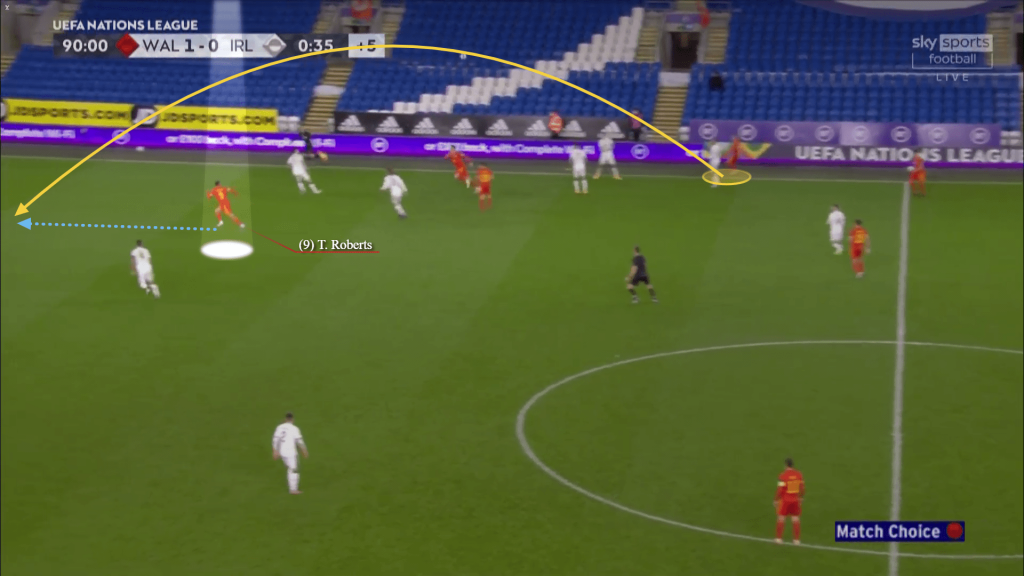 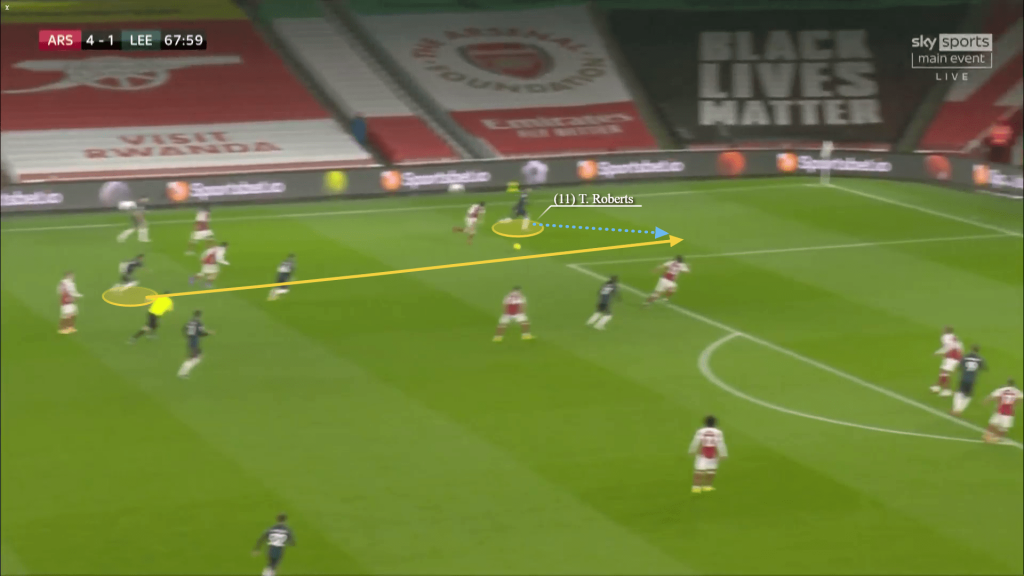 When the ball is out wide, he transfers his nous in the final third by bursting into the box to be an option. Either attacking the near post, far post, centre of the box or holding his run as the defence collapses deeper, Roberts has shown good instincts in the final third.

Having just scored his first goal of the season, this was a huge milestone for him, with him finally rewarding himself for all his hard work. “I’ve been striving towards scoring and been frustrated it hadn’t come before,” said Roberts.

“It’s a big weight off my shoulders and the emotions came out. I’ve been practicing my finishing, so when I got the chance, I was ready for it.”

After another season working under the managerial mastermind Bielsa, which has mixed good times and struggles, it’s been promising to see him end the season in style.

Receiving the backing of his manager despite the criticism and still just 22, it’ll be fascinating where he ends up playing next year. On the surface, though, Leeds certainly appear the best place for him to continue his development under a coach who fully trusts and appreciates his qualities.