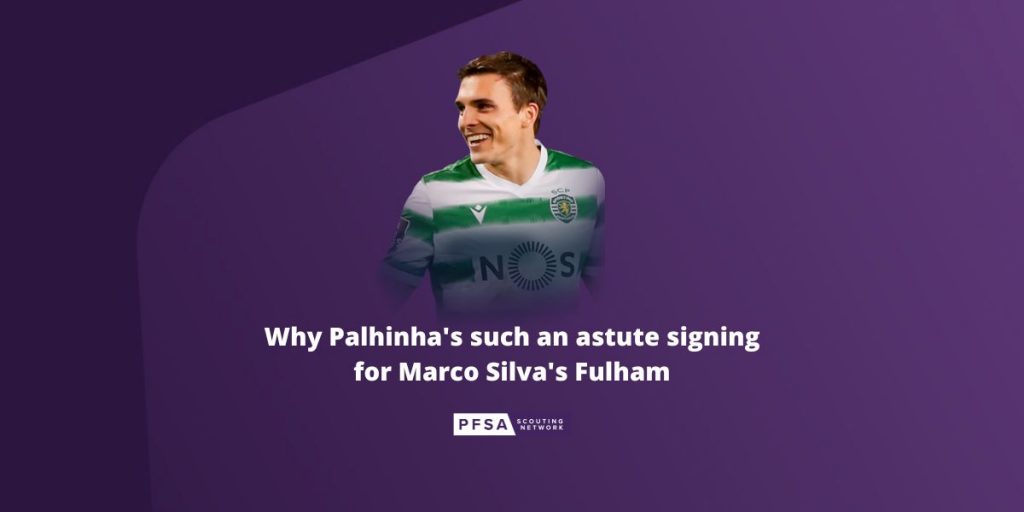 Wanting to reinforce their squad ahead of the new season, Fulham’s signing of Joao Palhinha is unquestionably a great way to kick off their summer transfer business.

Joining from Sporting CP for a reasonable £20 million following two especially excellent seasons under the tutelage of Ruben Amorim, which saw him win a league title, two cups and make the Primeira Liga team of the year in 2020/2021, the 26-year-old is primed to make the step up to the Premier League.

Having earned 14 caps for Portugal and enjoyed six Champions League appearances in that time too, this should hold the defensive midfielder in good stead to cope with the transition to English football.

“Playing in the Premier League is a dream that I will fulfil. Now I’m looking for success in the best league in the world and I want to prove my worth. I can only promise that I will do my best,” he recently asserted.

“I’m very glad to be here. It’s a big opportunity for me, for my career, to play in what is – in my opinion – the best league in the world.”

“I’ve signed with a great club. The club wanted me, and I chose the club, so I promise the fans that I will do my best, and I hope we can win so many things in this season.”

He then added what an integral component of the deal Fulham coach and fellow countryman, Marco Silva, was in swaying him to link up with the Cottagers. “I was convinced by the project and the persistence. Marco Silva loved me a lot and it was fundamental because he spoke to me more than once,” he explained.

“I spoke to several people who passed through the club and they all gave me good information. I’m sure it will be good for me.”

Experienced, reliable and consistent, Palhinha’s set to contribute immensely in all phases of the game for the newly promoted Fulham, who will be doing everything they can to avoid relegation.

Considering Fulham will have plenty of defending to do against the many world class teams and players plying their trade in the Premier League, Palhinha’s presence should be vital in helping them break up attacks and add some resolve in the centre of the pitch.

Positionally aware and awake to his surroundings, this is a crucial component of his success, for he frequently gets an updated mental imagery of what’s happening around him. As a result, he knows if he needs to adjust his positioning to shift across, drop deeper, block a vertical passing lane, support a teammate or take on a marking assignment.

Rarely out of position, making sound decisions and reading the play intelligently, opponents find him a tough man to get the better of when the play is in his designated area of operation. 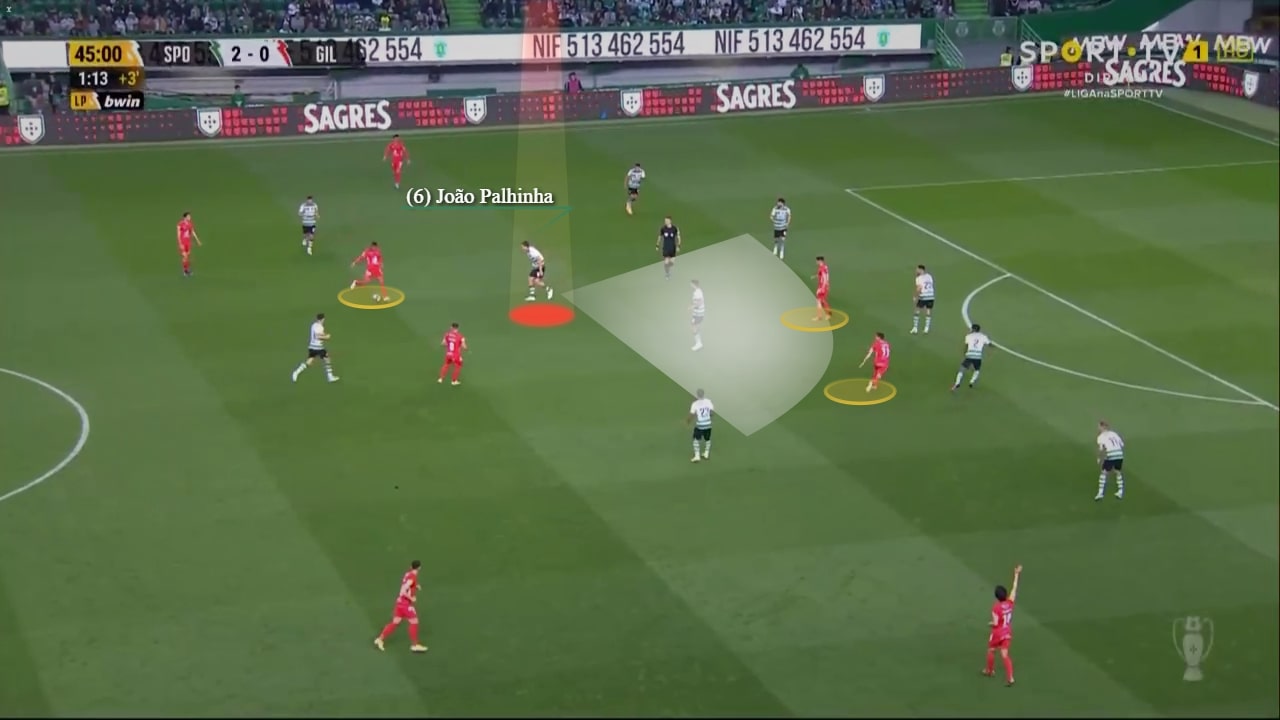 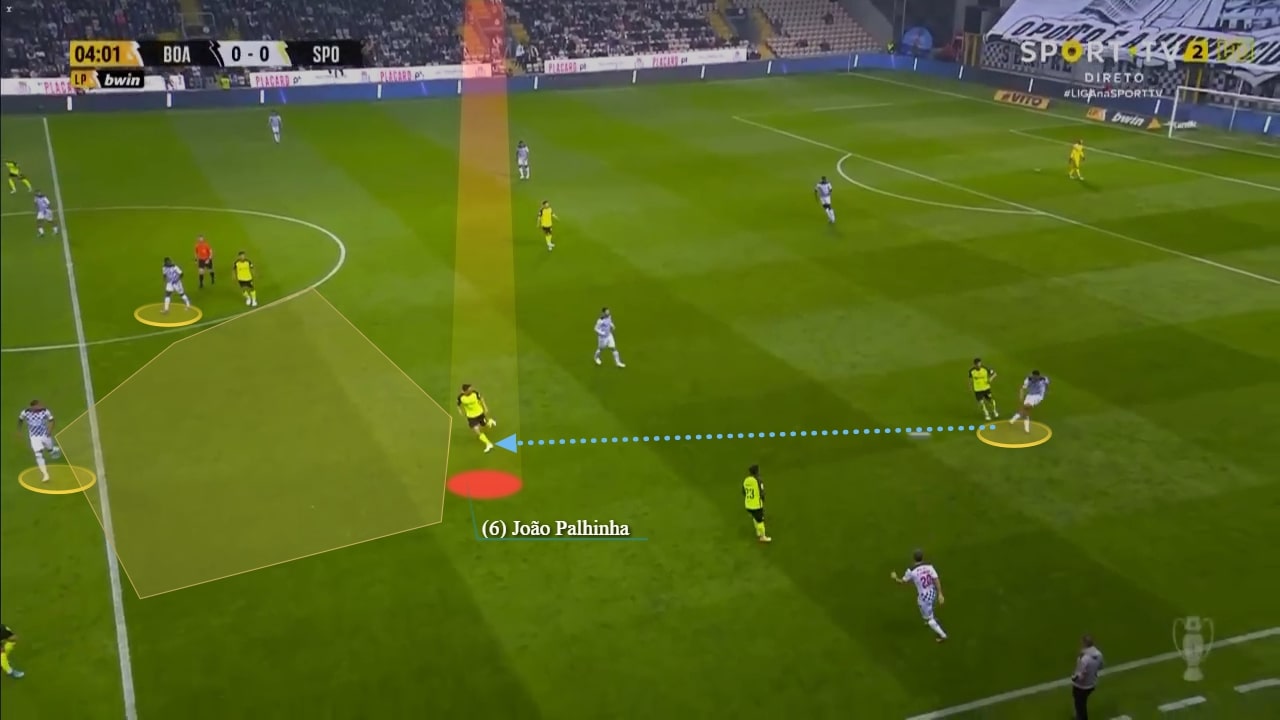 Exhibiting sound judgement when it comes to applying interventions and quick to react to triggers, this, in combination with how he uses his long legs to stretch out to recover possession, rangy arms to unbalance foes and sizeable frame to pose a formidable force in 1v1s, sees him combine brains and brawn to be successful in his duels.

Anticipating coherently what’s about to unfold next ensures he helps his team deal with counter attacks, for he knows if the opportunity to spring forward to counterpress is on, if he needs to hold his post to support his backline, take on a runner or jet across to slow down the transition to give his team a chance to get back. 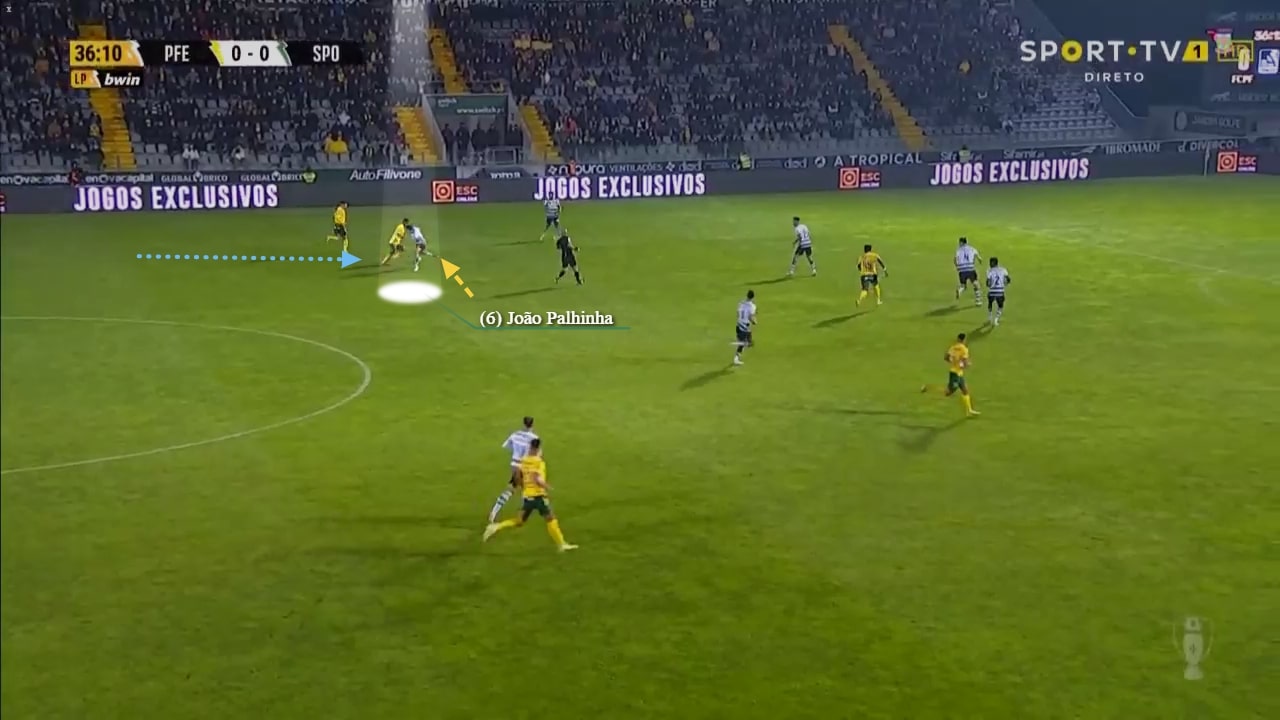 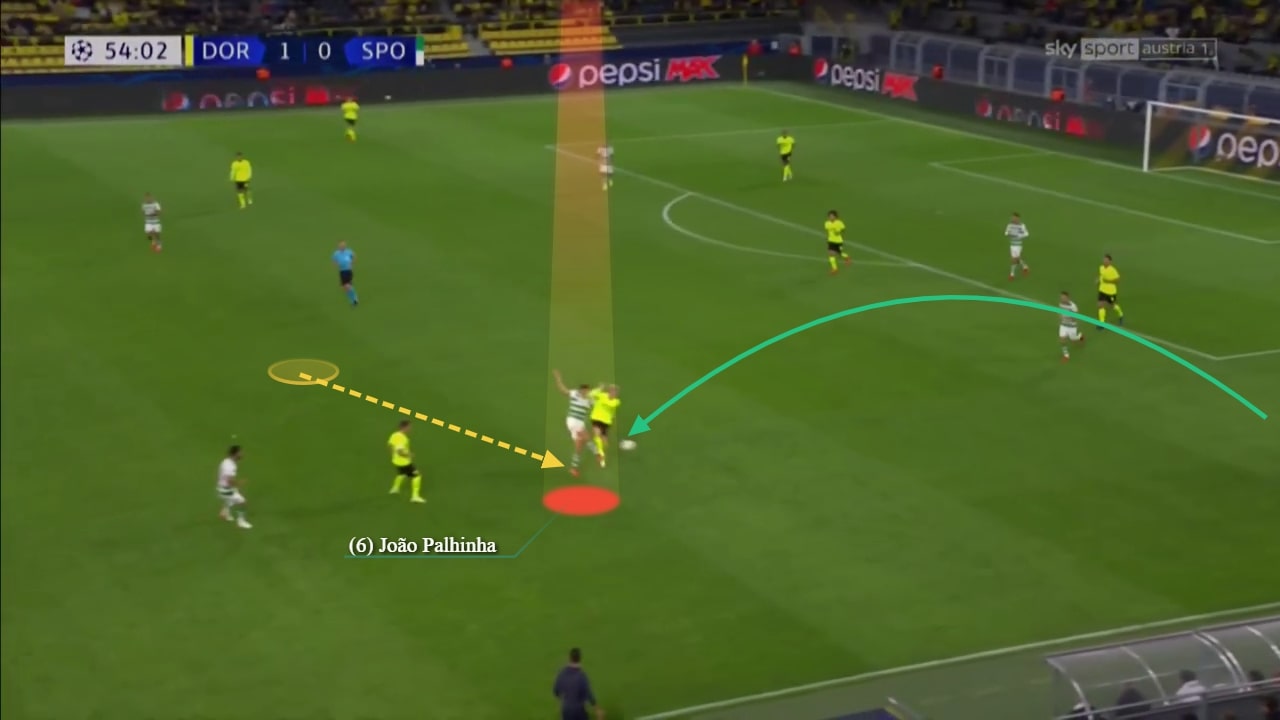 An absolute weapon in aerial duels, the 190cm powerhouse competes brilliantly here, using his size, ability to pick up the ball sharply and composure to win a large chunk of his battles. Be it assisting his team win second balls in midfield, deal with set pieces on both ends or clear danger from open play crosses and long balls into the box, his aptitude here shines brightly. 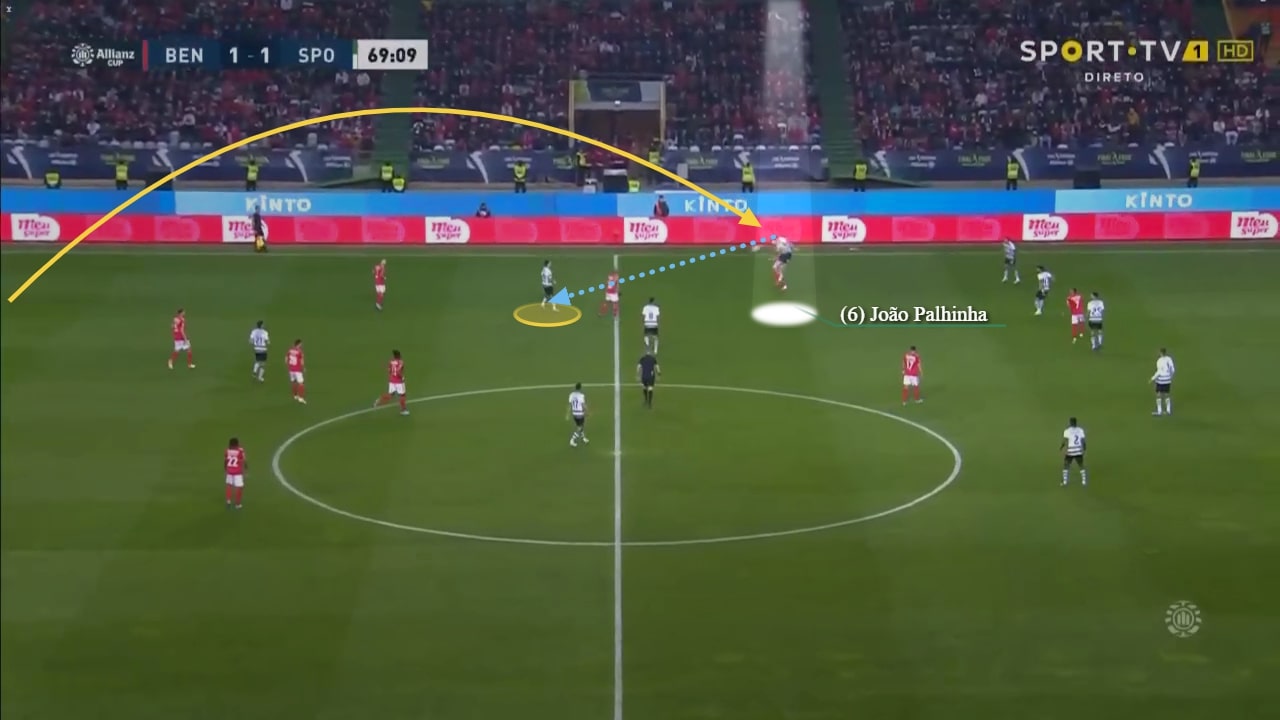 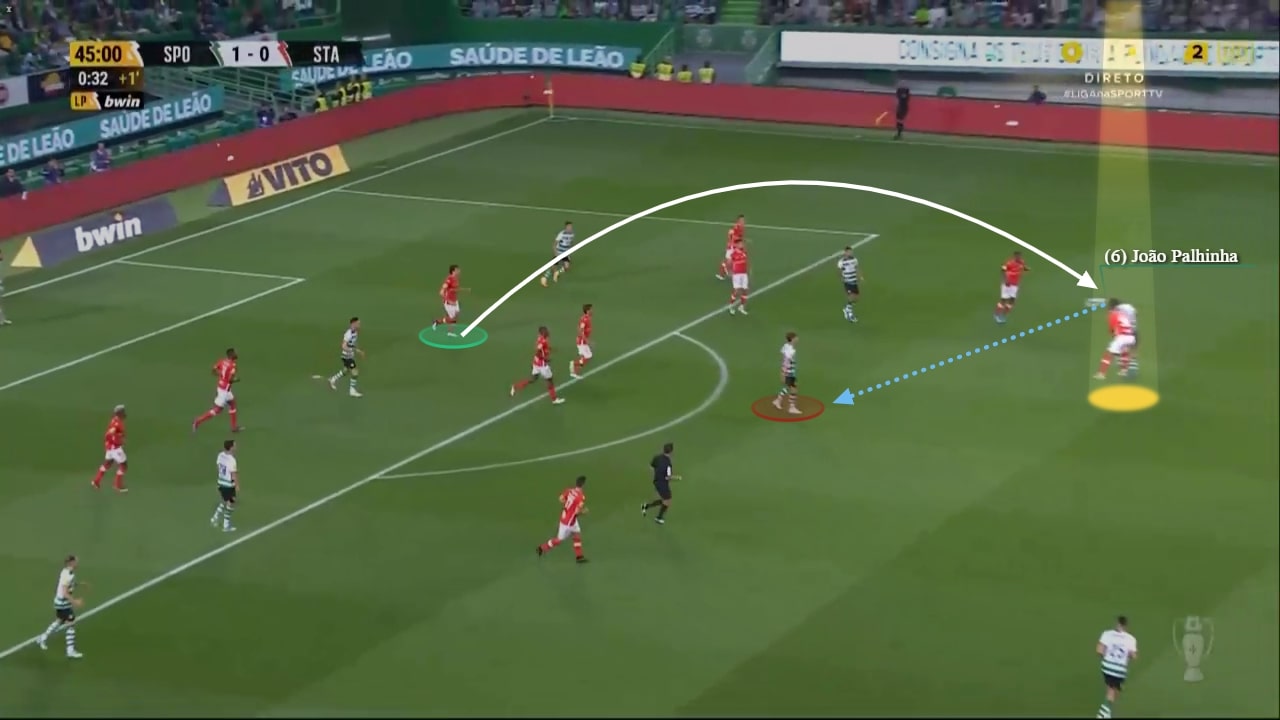 Although he’s not the quickest and can sometimes be exposed for pace, his nous, positioning and excellent execution of his actions typically negate any deficiencies he has here.

Meanwhile, on the offensive end, Palhinha plays his role superbly, for his movement and considered output with the ball at his feet amplify his worth.

Knowing where to be in order to help his team build out from the back, he occupies good areas to form overloads, create passing angles or draw opponents to open passing lanes. Supporting play nicely with his discipline and knowledge of where to move, this promotes smooth progression beyond the first line of pressure.

It’s also worth noting when his team moves further up the pitch how he helps provide options to recirculate possession, gets free by venturing into the less populated deeper half spaces so he can have time on the ball and adds structural stability in the event of a transition.

While he predominantly keeps his passes simple to help his team advance through the thirds with measured short passes, he can still strike the more expansive deliveries. Clean in his first touch and composed on the ball, if he sees an opportunity, he can duly launch a raking switch of play or thread a through ball in behind centrally or down the channels. 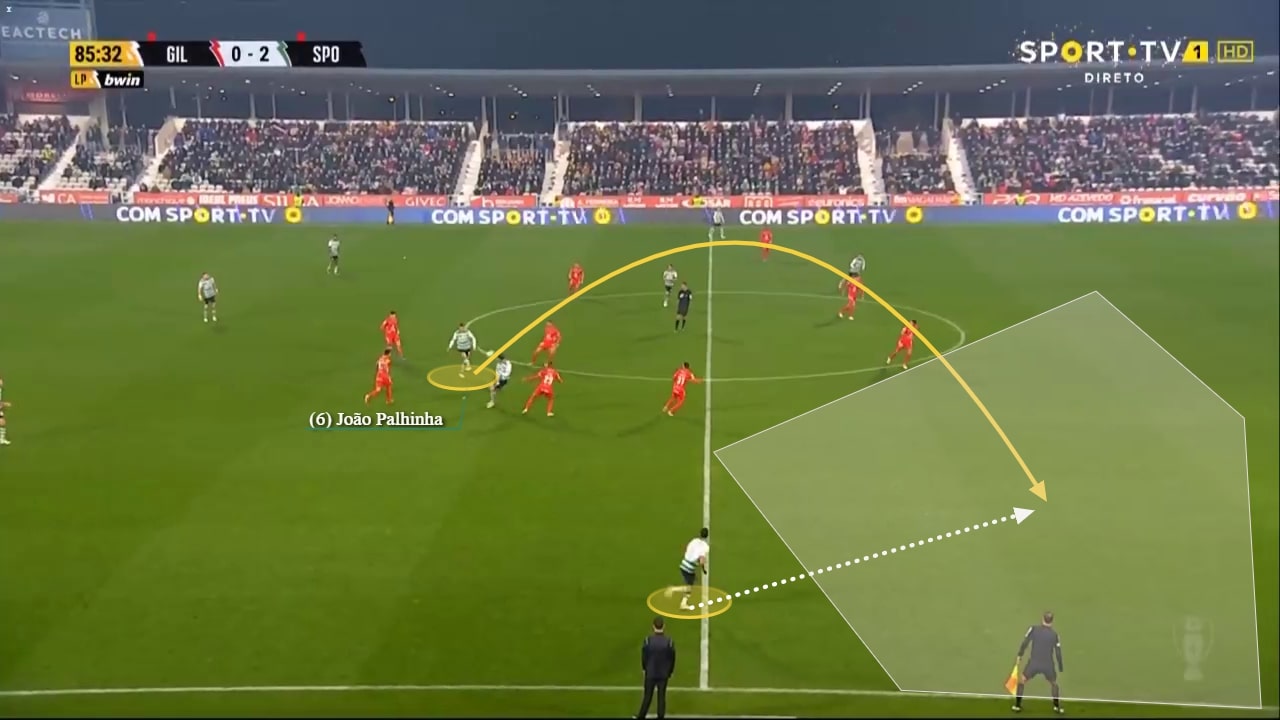 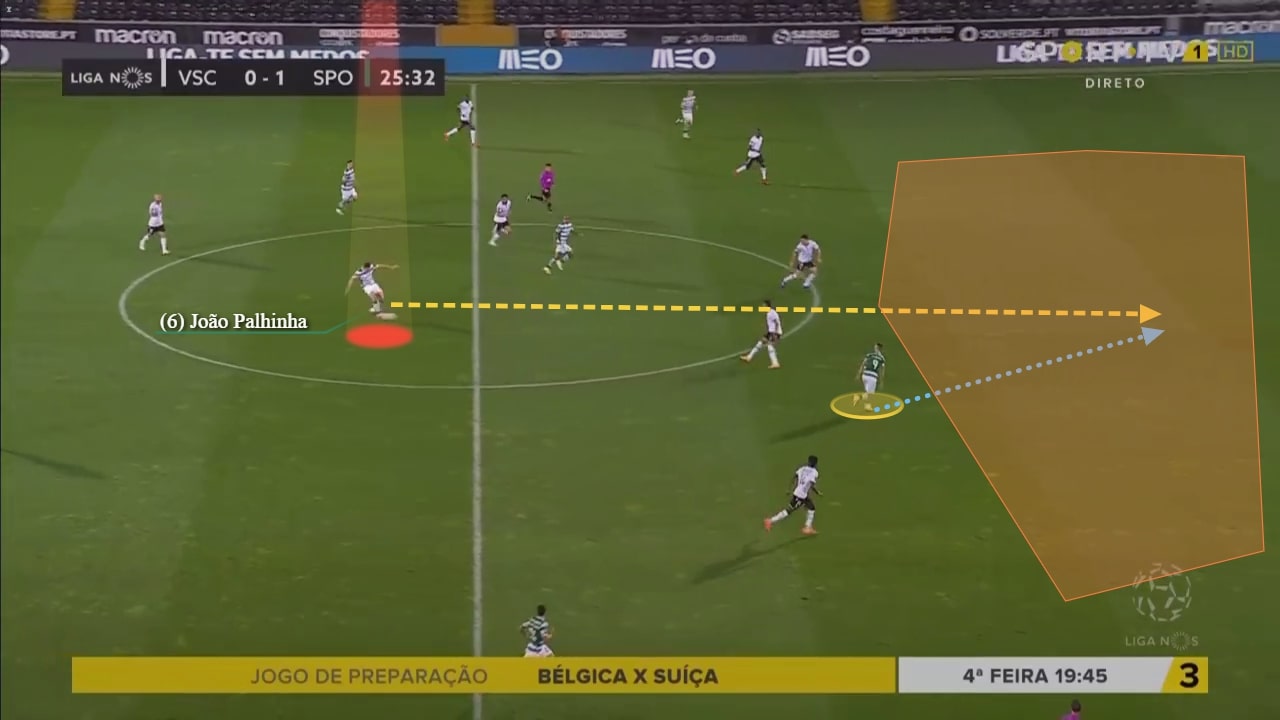 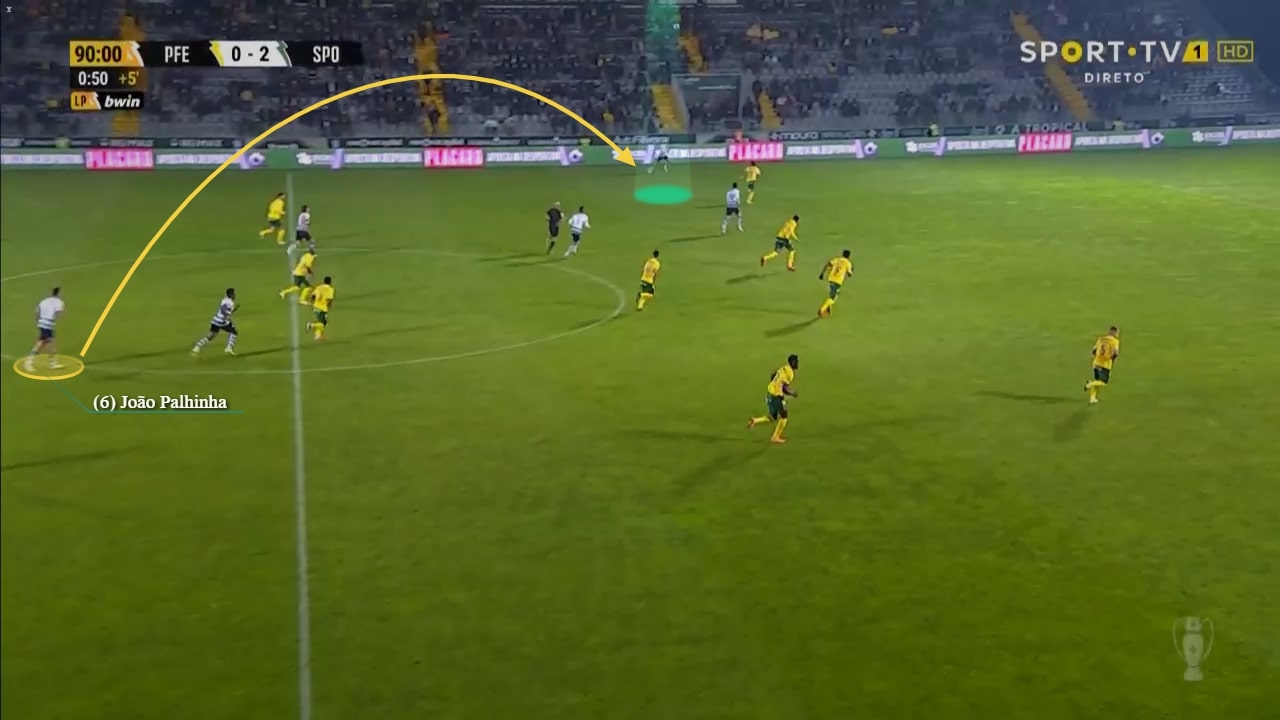 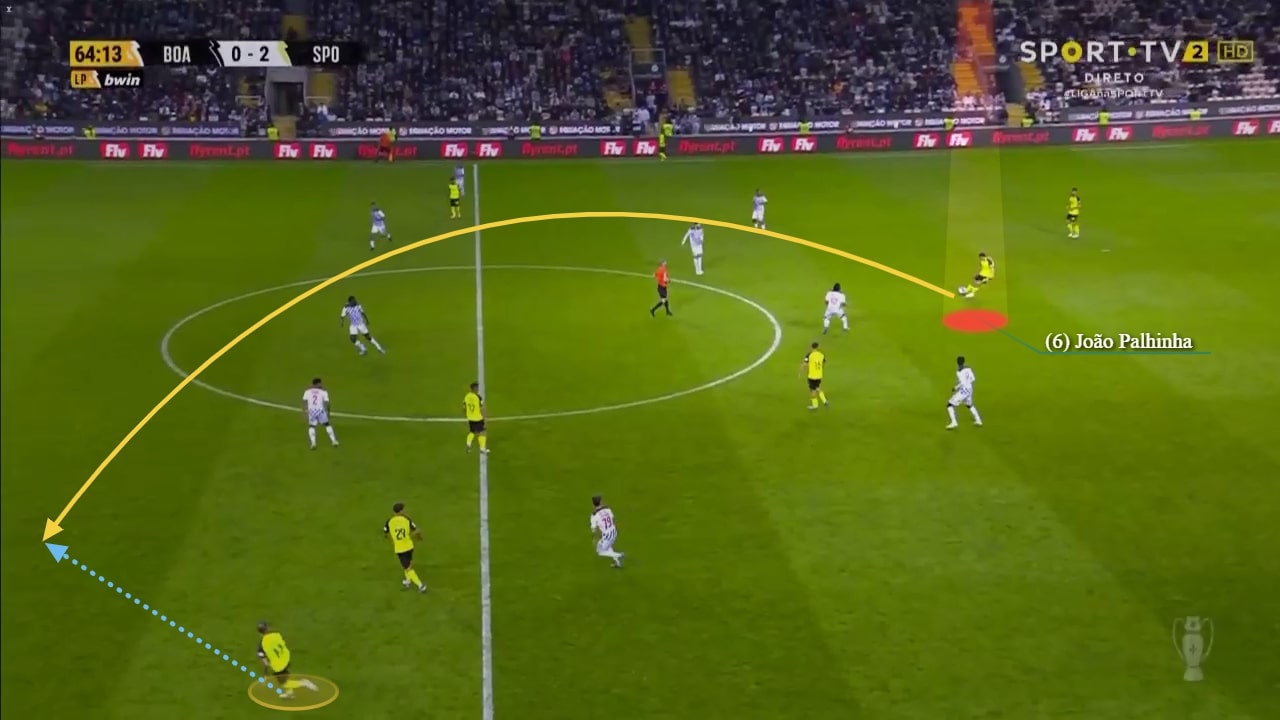 Considered with his ground passing too, he can also hit penetrative vertical and diagonal line breaking passes to the feet of attackers that take out multiple opponents. Moreover, how he can lay the ball off crisply to add tempo to passages or get out of a tight situation are extra strings to his bow.

Incisive, bright in his decisions to bypass or shift pressing opposition pressing units and so aware of his responsibilities, the deep lying, fundamentally sound midfielder certainly performs his duties with assuredness and clarity.

Entering the peak of his career and already experienced at club and international level, the capture of Palhinha, who’s often compared to Nemanja Matic, is littered with upside for the Cottagers. Recognising they needed to bolster their ranks in a thoughtful way after having previously splashed the cash with minimal success, signing Palhinha is a sensible piece of business.

Ready to stamp his mark in all compartments of the game under the guidance of Silva, whose presence should massively aid his adaptation process, bringing in Palhinha is a terrific step towards enhancing Fulham’s chances of survival and success.