Why Grosicki is such an important asset for Hull City 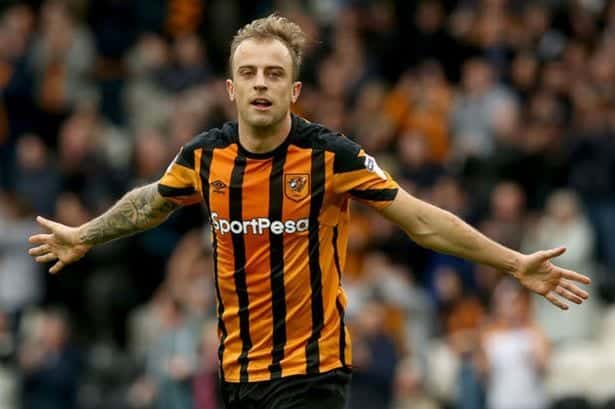 With Kamil Grosicki’s contract expiring next summer and interest coming in from many teams such as Turkish club Trabzonspor, the Hull City star certainly has some tough decisions to make on his future.

Unquestionably one of the best attackers in the Championship, the Tigers have reportedly offered him a new contract to try and ensure he remains at the KCOM, but it’ll be a case of wait and see while the Polish international decides on his future.

For a further indication of just how important he is to Hull, his manager’s comments on him aptly demonstrate this, with Grant McCann recently stating: “He’s been outstanding since I’ve been here. All I can speak about is what I’ve seen and for me, he’s one of the best wide players in the league, if not the best on his day.

“He’s so quick, dynamic, he can hurt anyone in the blink of an eye. He’s a great character. The boys love him around the building. He’s always smiling and chirpy. That’s just the way Kamil lives his life. I’ve got a good relationship with him and I think that’s really important with Kamil. His performances have been second to none.

“Kamil is loved here by the fans and he’s a huge part of what we do. He’s been in outstanding form for us – both him and Jarrod in the wide roles – and long may that continue.”

Typically deployed on the left-wing but often afforded licence to roam infield and interchange positions with his fellow frontmen, Grosicki’s coveted ability to both score and create goals makes him such a fearsome threat.

Technically superb and boasting a wand of a right foot, Grosicki, who’s impressively scored six goals this term, has blasted home some beautiful finishes to help his team. Capable of striking some magnificent free kicks, placing his finishes, hitting neat tap ins and good when 1v1 with the keeper, there’s been much to admire about his efforts in front of goal.

Although he’s only notched three assists, his creative passing has added so much offensive impetus to Hull’s work in the final third, for he’s able to unlock backlines in a variety of ways. Full of imagination and incision, the 30-year-old’s ability to set up teammates with some lovely through balls in behind, vertical line breaking passes, crisp channel deliveries and neat combination play in tight spaces has been very notable. 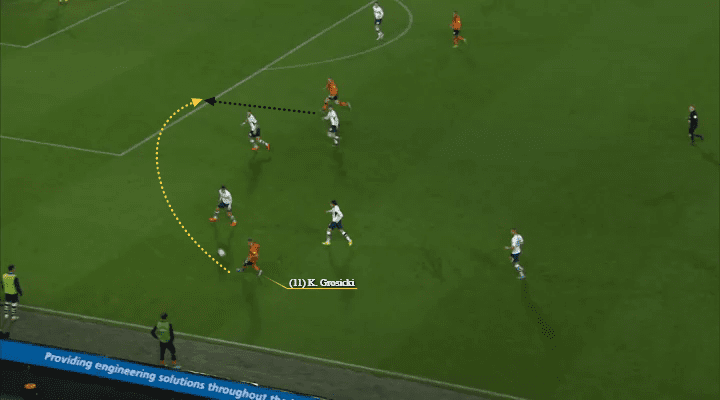 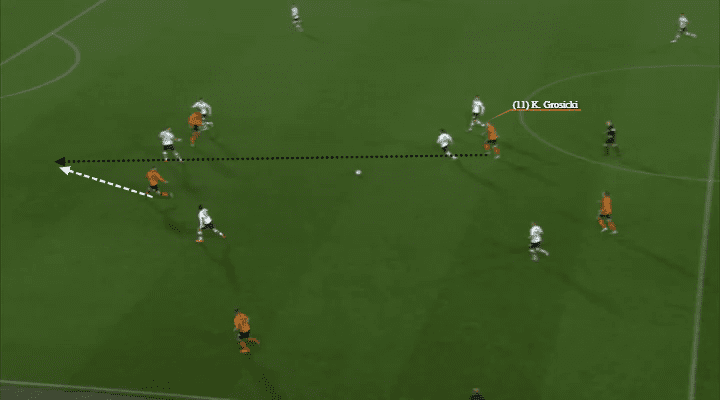 Moreover, Grosicki’s crosses and cutbacks have been another highlight, where he’s read his mates’ runs well to supply promising balls into the box. Also using some crafty flicks, outside of the boot passes and neat layoffs, he’s illustrated how precisely he can execute these higher risk passes to unhinge backlines.

Amplifying issues for his adversaries with his movement, this enables him to serve as a terrific outlet for teammates to progress upfield through. To start with, his runs into the box are of a very high standard, for he’s very adept at evading the attention of trackers while exploiting the space available inside the area as the defence collapses deep or misses his run at the edge of the box. 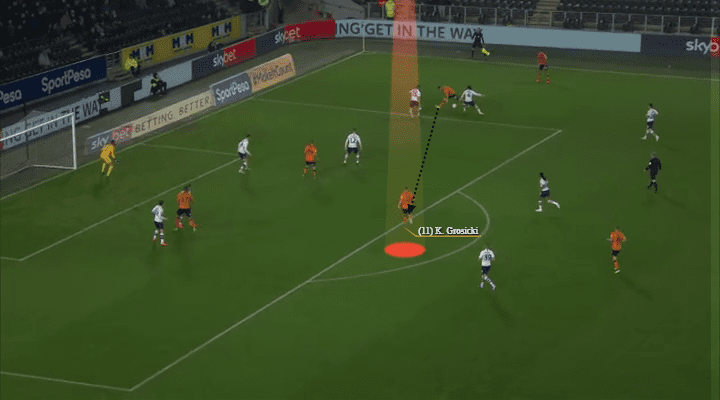 A master at ghosting into the area and maximising the openings available to him, he unsurprisingly gets into so many promising locations. In addition, his runs in behind the defence from both central and wide locations have been a highlight, where he’s quick to spot gaps between defenders and when the wide channels are open. Exploiting the blindside superbly and placing doubt in defenders’ minds means he often draws multiple markers to free up colleagues in the offensive third too. 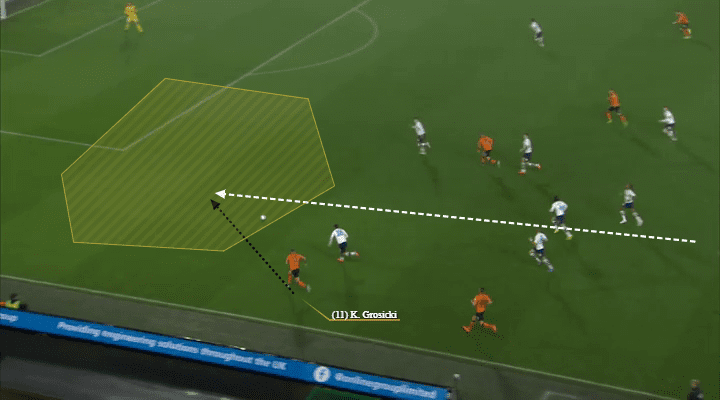 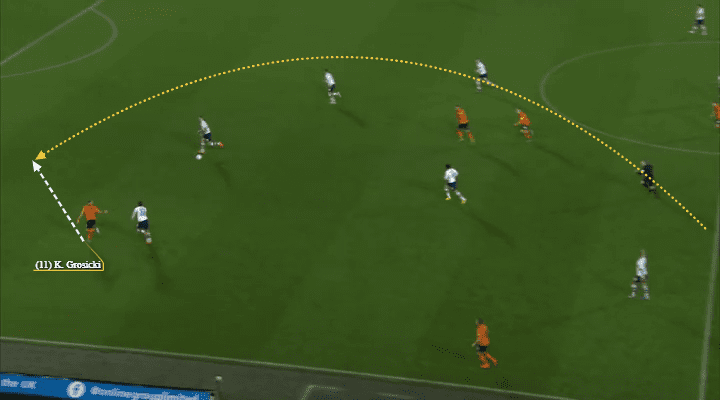 It’s important to mention his prowess at tucking infield to find spaces in between the lines both centrally and in the half-spaces. All of the aforementioned causes dilemmas for his markers, for his shrewd variations, make sure his markers can’t settle into a rhythm of how best to stop him, plus pin opponents to free up opponents. 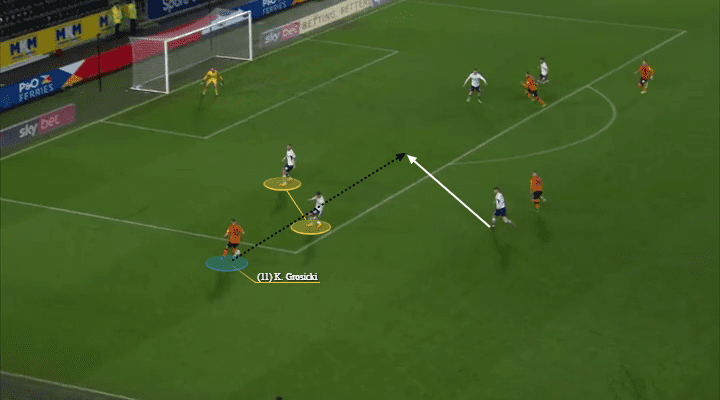 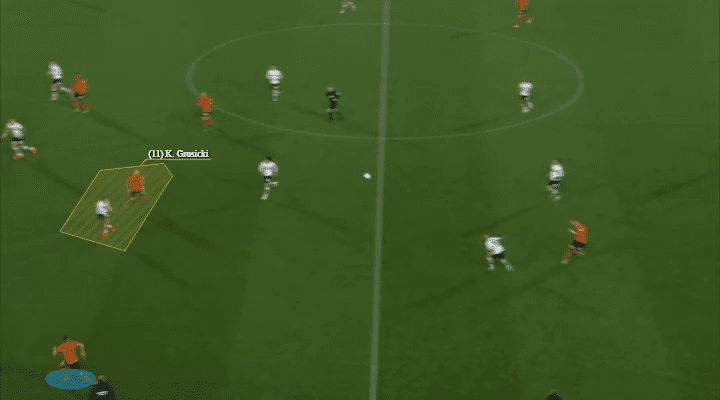 Such a menace and capable of hurting opponents in a variety of ways, it’s absolutely imperative for Hull to keep hold of their prized asset, for his multidimensional skill set will be nigh on impossible to replace.

With the January transfer window fast approaching, watching what happens in terms of Grosicki’s future will be something to keep an eye on, for Hull will need to do everything in their power to keep their Polish star.