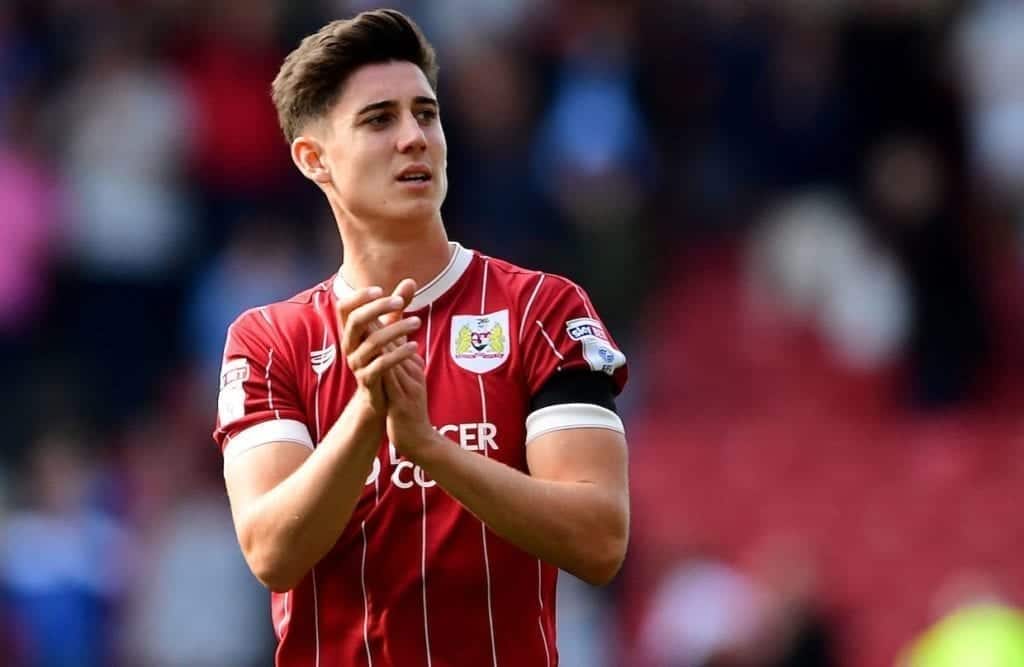 Callum O’Dowda’s form has been a great source of positivity for Bristol City of late, with the Irishman producing some excellent performances.

After a mixed start to the campaign, that wasn’t helped by him missing some games through illness, the talented attacker’s enjoyed a great December and start to January, where he’s bagged two goals and an assist on his way to playing at a level resembling his best.

Going from strength to strength, it’s been terrific to see him shine against some quality outfits like Norwich City, where he was arguably man of the match, and Frank Lampard’s Derby County.

“I’ve been quite unlucky with my illnesses, and I still probably haven’t got over it 100%. So it’s nice to get back in,” he recently explained.

While his defensive commitment, intensity and aggression has seen him press and tuck into his defensive work admirably, his impact has been most keenly felt going forward.

A wicked dribbler who relishes taking on his man in 1v1 battles and charging upfield on the counter, he’s been an extremely challenging man to face off with. Possessing a wide array of tricks and maneuvers to outfox his opponents, he can get by them with stepovers, feints, shimmies, shoulder drops and more. In addition, the speedy 23-year-old’s also shown his solid first touch, good ball control (which importantly remains tight at high speed), a razor sharp turning circle and the ability to rapidly change pace or direction to unbalance his marker. 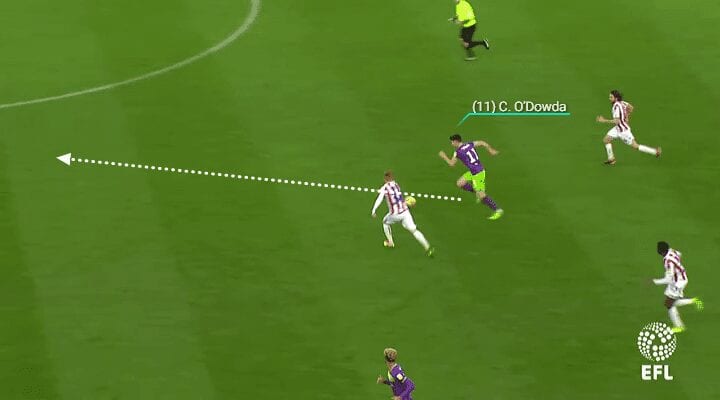 Scanning his surroundings often to refresh his imagery of his environment, he’s notably always on the lookout to use his passing to find teammates in better positions. Ambitious, creative and never afraid to play progressive vertical passes to unlock his adversaries, he hits his passes with conviction. Indeed, his neat combination play in close quarters, capacity to hit raking through balls, crisp crossing and slick diagonal deliveries, that move blocks vertically and horizontally, only enhance his worth. 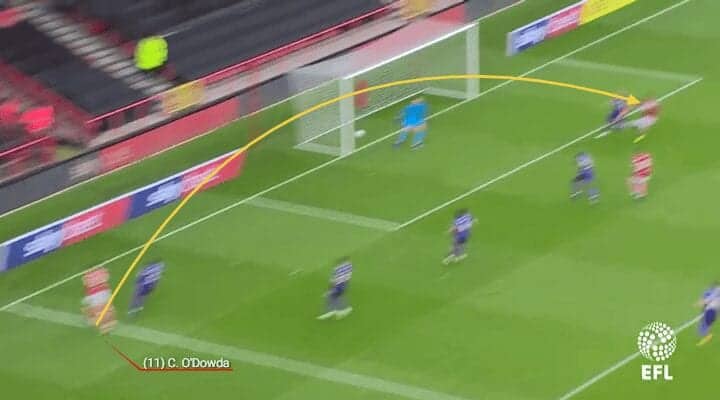 Although the odd turnover inherently occurs due to the risk attached to his bold approach, the positives far outweigh the negatives. Another key byproduct from his assuredness in possession comes from the press resistant Irishman’s ability to hold on to the ball for as long as possible before releasing it. Not only does this provoke a press to free up a teammate further upfield, but it can also free up passing lanes or destabilise their opponents further by drawing two men out of shape. 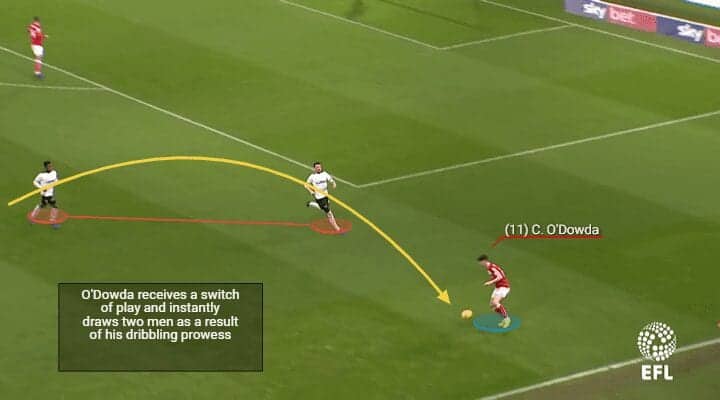 With all of the aforementioned in mind, O’Dowda’s unsurprisingly been a tough and unpredictable customer to contain when on top of his game with the ball at his feet.

Accompanying the afore with his crafty movement, the former Oxford United star wreaks havoc in this area too. Whether smartly identifying pockets of space in Bristol’s more methodical build up passages or by embarking on dangerous runs in behind, the timing and directing of his runs have been on point. By often starting his runs on the blindside of his tracker, this ensures he has a heightened chance of getting onto deliveries with separation from his man, plus in a much better body orientation than his more awkwardly positioned adversaries. 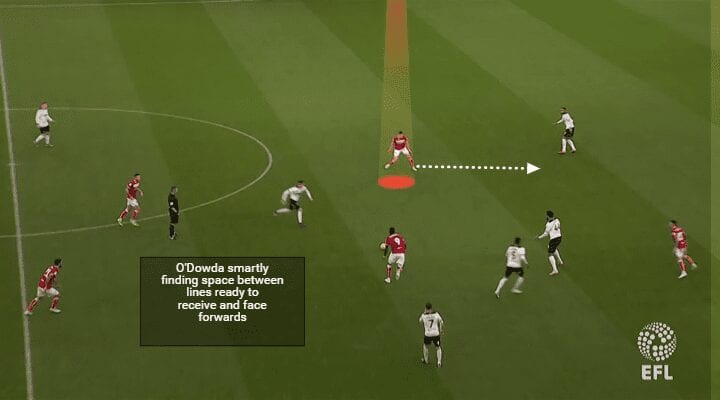 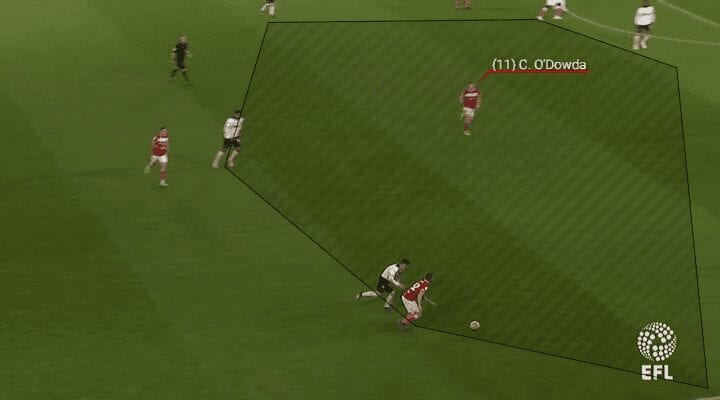 Additional upside arises from how he slickly rotates across Bristol’s frontline, with these neatly undertaken interchanges extremely unsettling for backlines, as they don’t allow defenders to settle into a rhythm of how best to nullify their man.

A player so gifted, it’s hardly surprising he’s attracting plenty of attention from other clubs. But his manager, Lee Johnson, has insisted he’d love to keep his influential attacking weapon. “In my eyes, he’s a player that I really want to continue to work with. The potential is still untapped for various reasons such as the stop start nature of football and sometimes injuries and the concussions that happen,” he commented.

“It’ll bear fruit for all of us if he stays here for the next three or four years of his career. My recommendation is for the club to keep Callum and everyone knows that.”

Looking ahead, the challenge will now be keeping up his high level in the new year, as he’ll be a vital component towards Bristol’s aspirations to continue surging up the Championship table.