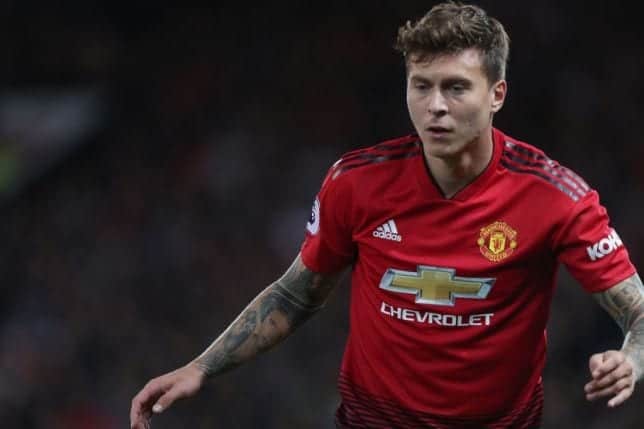 Following a difficult first season at Manchester United, where he largely failed to live up to his £30 million price tag, it’s been encouraging to see Victor Lindelof begin to impress this campaign.

With United underwhelming in terms of their results and performances under the now departed Jose Mourinho, having only won two one of his last eight matches in charge, the former Benfica star has been a shining light of late. In his best run of form since joining the Red Devils, which was only interrupted by a three week injury lay-off, the Swedish international’s clearly feeling much more comfortable this season, something he told Inside United.

“Yeah, I feel good,” he said. “I’m always happy when I play. I always want to help the team and contribute in any way I can. It’s always good for me to play so I’m very happy at the moment. Not with the results, obviously, but I want to keep on going to try to help the team in the way that I can.

“All my teammates are very, very good and I feel very comfortable with everything around it. I think this season is hopefully going to be better than last season – for the team and also for myself.”

With particularly eye-catching outings vs. Chelsea, Juventus, Liverpool and Cardiff City (Ole Gunnar Solskjaer’s first game at the helm), where he did a splendid job keeping the likes of Eden Hazard, Cristiano Ronaldo and Mohamed Salah in check, his efforts were justifiably recognised with praise from pundits and fans.

Blessed with blistering speed and acceleration, this aspect of his game has served as a wonderful foundation towards his success. Be it tracking runs in behind, dealing with counter attacks, covering a teammate or mopping up any midfield runners from deep, his pace has been crucial in helping his team handle these situations. 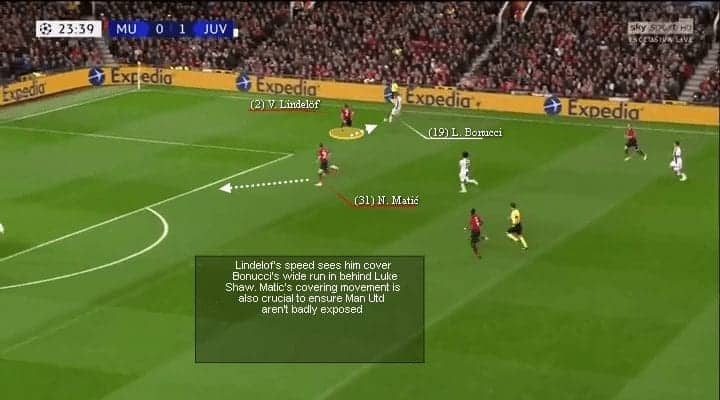 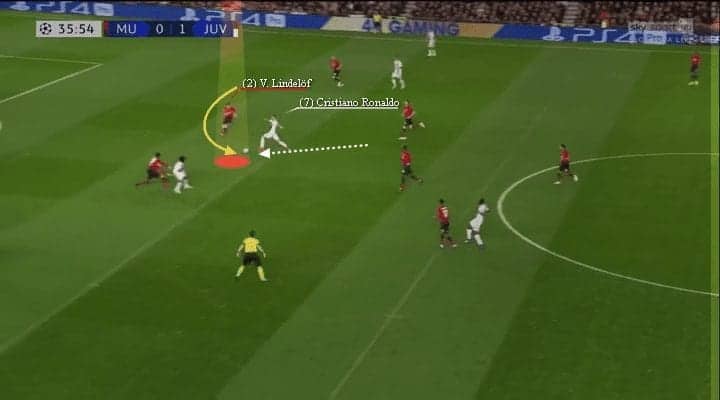 Combine the aforementioned with his sound ability to read the play, concentration and his smart use of head scans, and this only enhances his worth in breaking up attacks. Holding his own physically too, his strength and powerful leap have held him in good stead to combat bigger forwards through his aerial prowess, where he’s used all of his 187 cm frame to win 2.5 aerial duels per game.

On point with his positioning for the most part, he’s improving all the time with his spacing between his defensive partners, lateral shifting and how he cohesively adjusts in unison with his backline. On an individual level, the 24-year-old’s timing of when to step out and press his opponent in his designated area of operation, plus when to leave his post to support a colleague, have also been major positives. 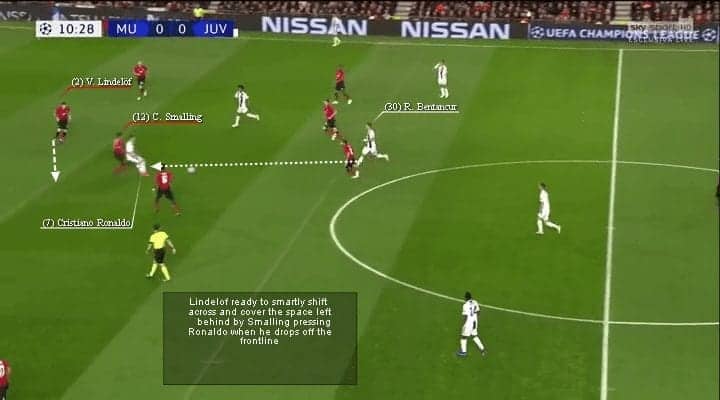 Rapid to react to pressing triggers like when an opponent receives with their back to goal, receives in an open body posture, has a poor first touch or if the incoming pass is underhit, he’s been quick to pounce and make life as difficult as possible for his man.

This area of his game has been very effective when he’s dealing with crosses and cutbacks too, for he’s typically situated himself in ideal locations to intercept, clear or prevent his foe from outfoxing him to nip in ahead of them. Picking up the ball’s flight path and speed while crucially keeping tabs on his man, the graphic below offers a nice example of how well he deals with such instances. 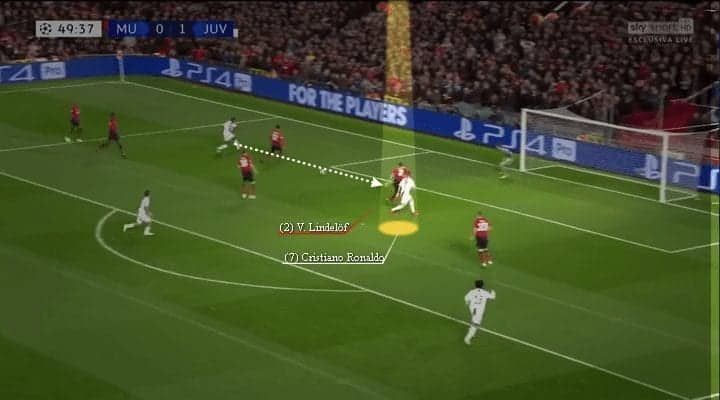 Physical, athletic and getting the finer details spot on, Lindelof’s proven how successfully he can play against a wide array of strikers with varying skill sets.

The man who’s probably the Red Devils’ best ball playing defender has contributed admirably in his team’s offensive animations. Passing the ball coherently and with purpose, he’s connected, recirculated and constructed United’s play in possession. Also proficient at hitting more adventurous deliveries when the chance presents itself, the two footed stopper’s shown his ability to break the lines, release teammates in behind or put his wingers in preferred 1v1 battles. 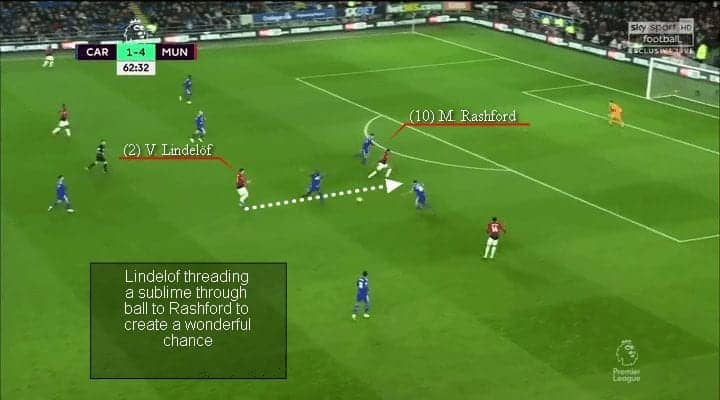 Handy on the dribble to boot, Lindelof notably carries the ball upfield smoothly, where he then looks to instigate a pressing action from an adversary to free up a teammate upfield. It must be said, however, that he could be more aggressive with this, as he frequently passes the ball too early instead of holding onto the ball longer to manipulate the opposition structurally. Judging by Solskjaer’s first game on the weekend, where he was clearly given more of a licence to push up, expect Lindelof to excel in this area from now on. 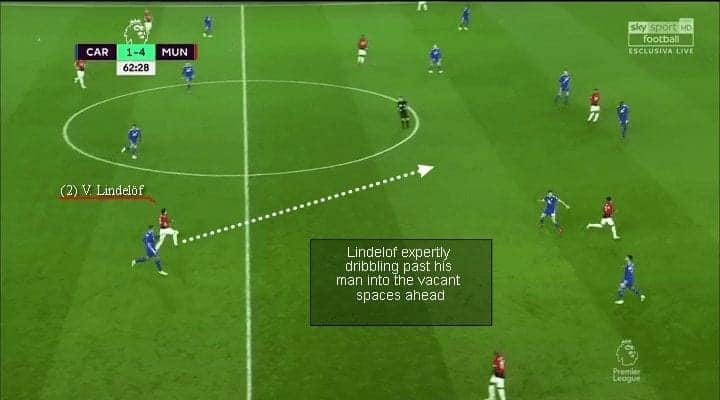 Upon reading into his statistics, and there’s much upside to be drawn, with him completing 43 passes pg at an 89% rate, seven interceptions pg, 1.8 tackles pg, nine ball recoveries and 0.75 progressive runs pg.

Recently citing his heavily derided, now sacked coach, Mourinho, as an instrumental figure towards his excellent form, it’s clear he was a player who relished working under his tutelage. “Ever since I came, he’s been very important to me,” he explained. “He talks to me, tries to help me, he gives me – how do you say it in English… to improve my game and stuff like that. He’s been very important. I think he’s been fantastic and I’m very happy to have him as a coach.”

“It feels good. I’ve been playing a lot of games since the start of the season, I’m just trying to keep on going and doing the best for the team. At the moment I feel good – my body is fresh.”

With many of United’s central defenders struggling, the man nicknamed “The Iceman” is quickly developing into United’s most valuable defender. Full of confidence following his exceptional form and recently being crowned Swedish footballer of the year, there’s no reason to suggest Lindelof’s upward trajectory won’t continue as he looks like he’s put his past missteps behind him.