Ultra talented Livramento lighting it up with Southampton 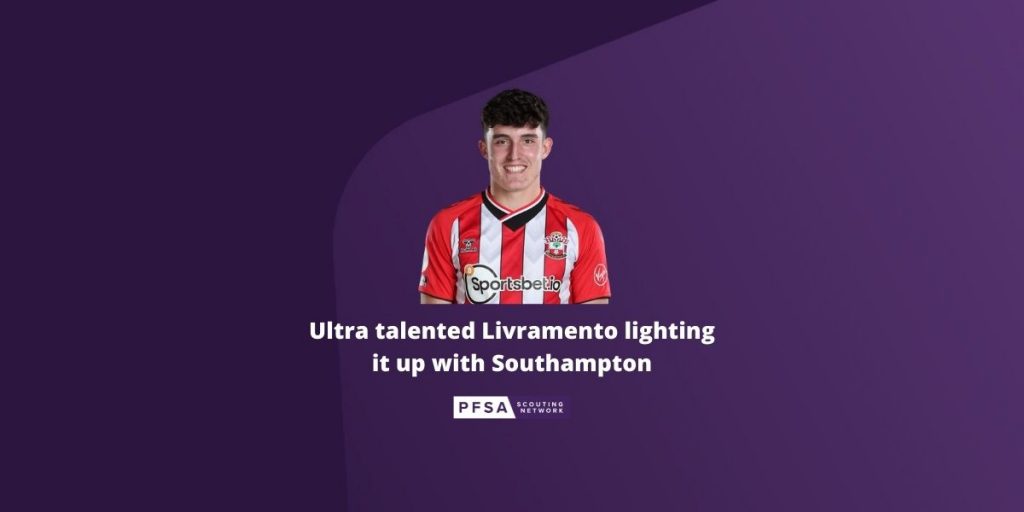 Going from strength to strength with every passing week, Tino Livramento’s been one of the revelations of the Premier League this season.

Joining Southampton for just £5 million in the summer, Chelsea’s academy player of the year last term has adapted superbly to the professional game. Despite Chelsea wanting to keep him, his desire for regular first team minutes saw him make the tough decision to leave. “I thought I was ready to take that step up as an individual and had to look at where was the best pathway for me to maybe get given the opportunity to show now I’m ready to take that next step,” he explained.

“When Southampton showed interest it was hard for me to turn down a club that has proven to be a great place for young players to grow and get given the opportunity to show a bigger audience that they are ready.”

There’s no doubt he made the right call, for he’s found the perfect place to receive regular action playing within Ralph Hasenhuttl’s Southampton. Looking the goods and settling in beautifully to the Austrian’s plans at right back, the 18-year-old’s even surprised himself with his amazing progress. “I didn’t really expect to play straight away,” he told the Daily Mail.

“Maybe play in the cup competitions, come on as a sub a few times in the Premier League. Towards Christmas maybe get the opportunity to start a few games.”

Having already amassed 986 minutes across his 11 league appearances, it’s been impressive to see him hit the ground running. Moreover, obtaining vital experience and already playing against the likes of Everton, Manchester United, West Ham, Manchester City, Wolverhampton Wanderers, Chelsea and Leeds United has given him crucial knowledge of what it takes to compete at the elite level.

Proving what an asset he is going forward on his way to bagging a goal and an assist, Livramento’s attacking instincts and skills have been a joy to watch.

Relishing every chance he gets to drive upfield with the ball at his feet, this aspect of his armoury ensures he’s a massive threat. Languid, effective, skillful and boasting great pace, once in full flight defenders find him a challenging man to contain. Whether outfoxing foes with his sweet shimmies, shoulder drops, changes of speed and his long strides that make it hard for defenders to gauge if they should step out or stay put, opponents are in for a battle against him.

Good at protecting the ball with his strength and ability to adjust his receiving angle, plus keep opponents at distance by using his long arms and legs, this adds to his nuisance.

Very powerful and having the ability to unbalance opponents in a variety of ways, it’s been important to note how he also wins freekicks in promising areas, which allows Southampton’s set piece master James Ward-Prowse to create danger.

Being so press resistant and calm on the ball helps his passing game too, for this means he still executes his actions coherently. A proficient crosser from wide areas and alert at spotting runners into the box, teammates’ movement is regularly obliged.

Able to tailor his deliveries depending on the situation, where he can either hit his crosses with whip, dip, swerve, power or loft, this has been a highlight. It must be said, some of his low cutbacks have really drawn the eye, with him hitting these with accuracy and precision to give his target a good chance of getting shots off. 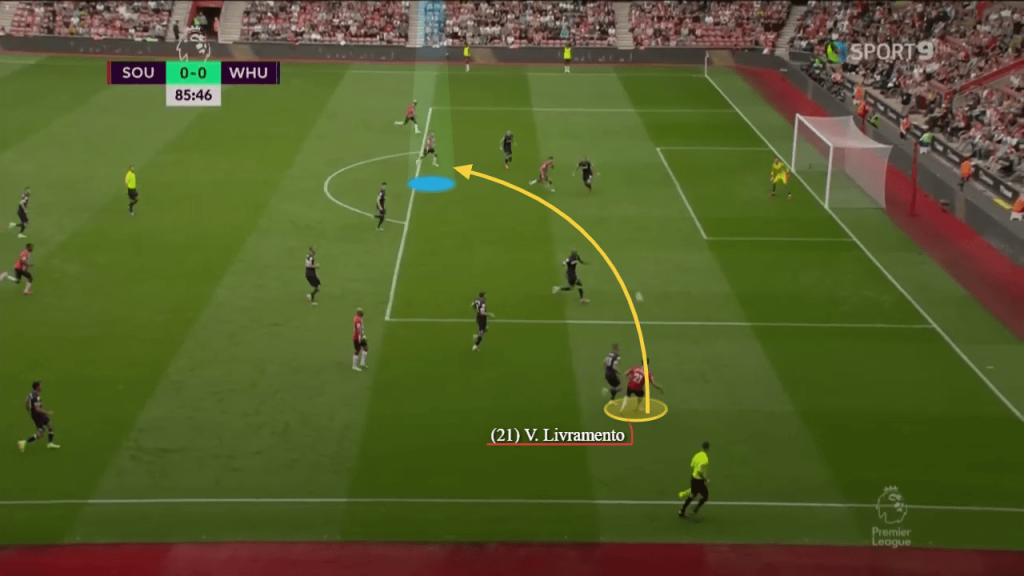 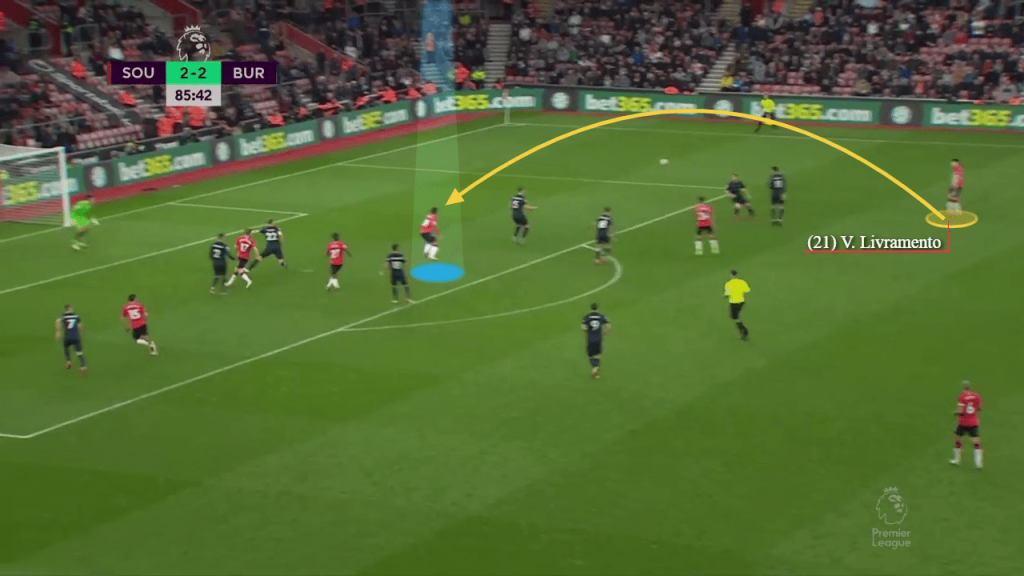 Further upside can be found from his excellent through balls in behind and down the channels. Showing tidy vision and awareness, these expansive passes have been useful to not only generate chances but also to destabilise stopping structures. 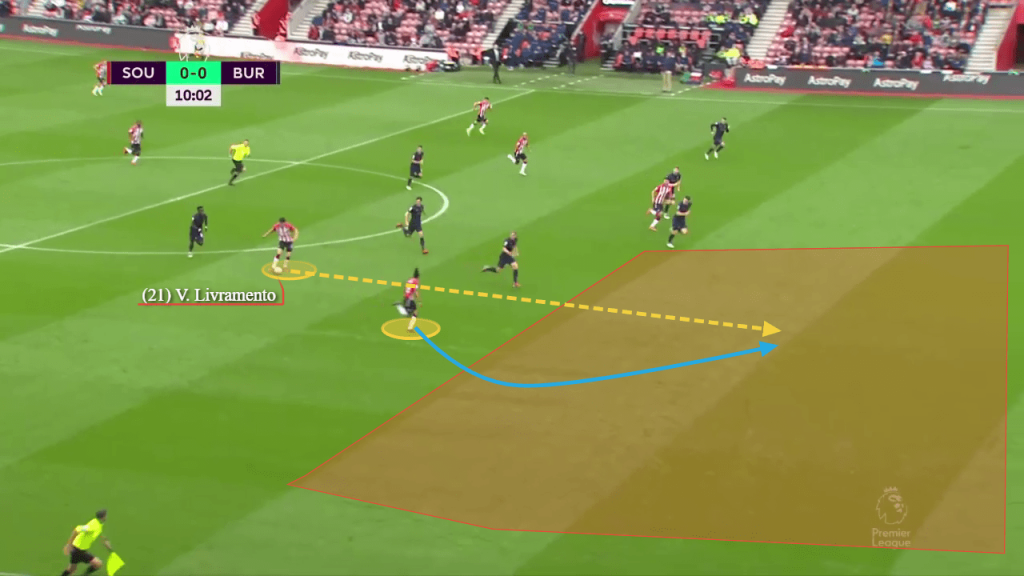 Ultra fit and capable of motoring up the touchline relentlessly all game long, this, in combination with his smart run timing, has seen him be a big weapon. Picking his moments when to maraud forward, surge ahead on overlapping bursts, form overloads wide or make blindside runs into the box when the ball is on the opposite flank, Livramento’s exhibited brilliant judgement. 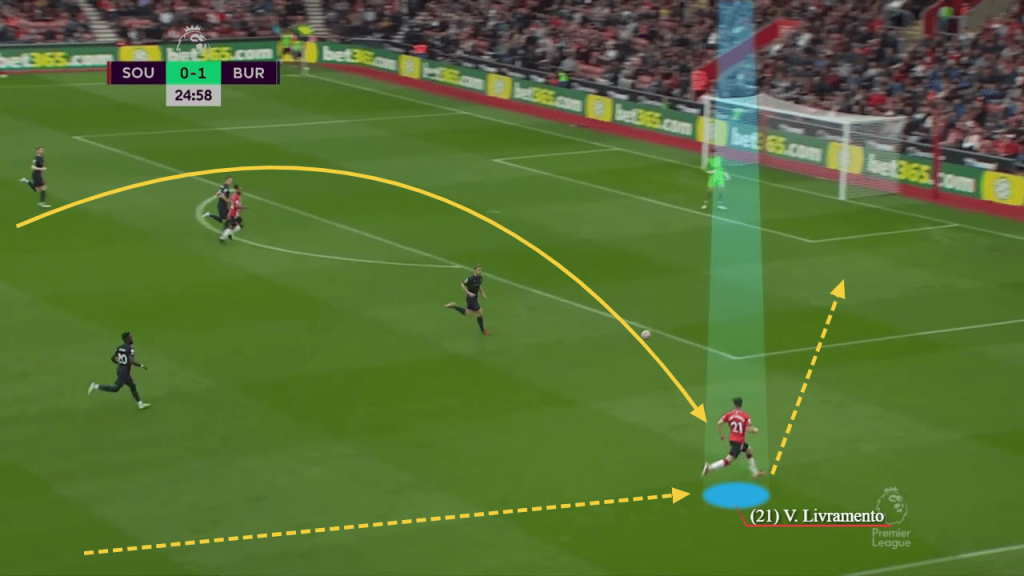 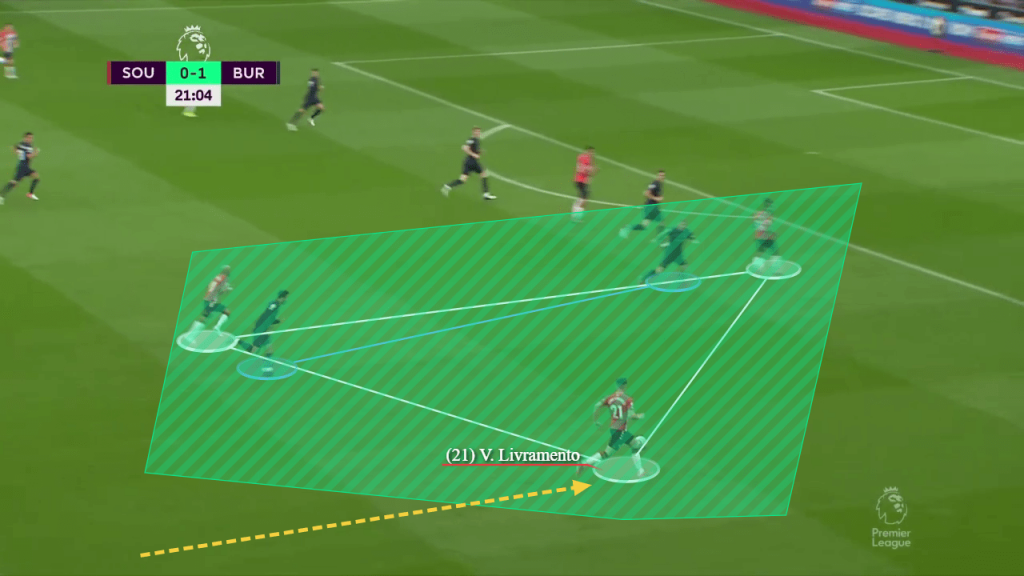 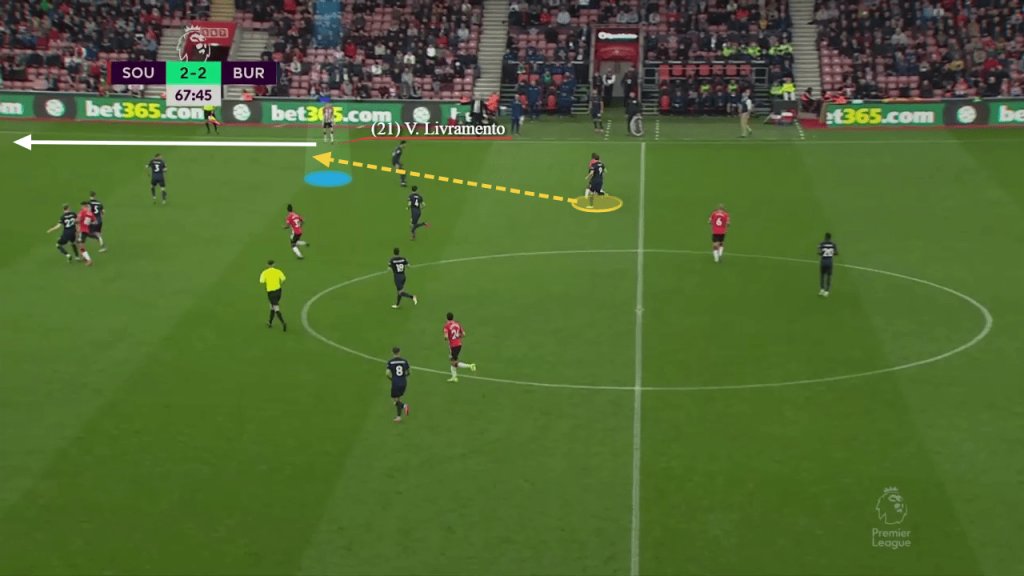 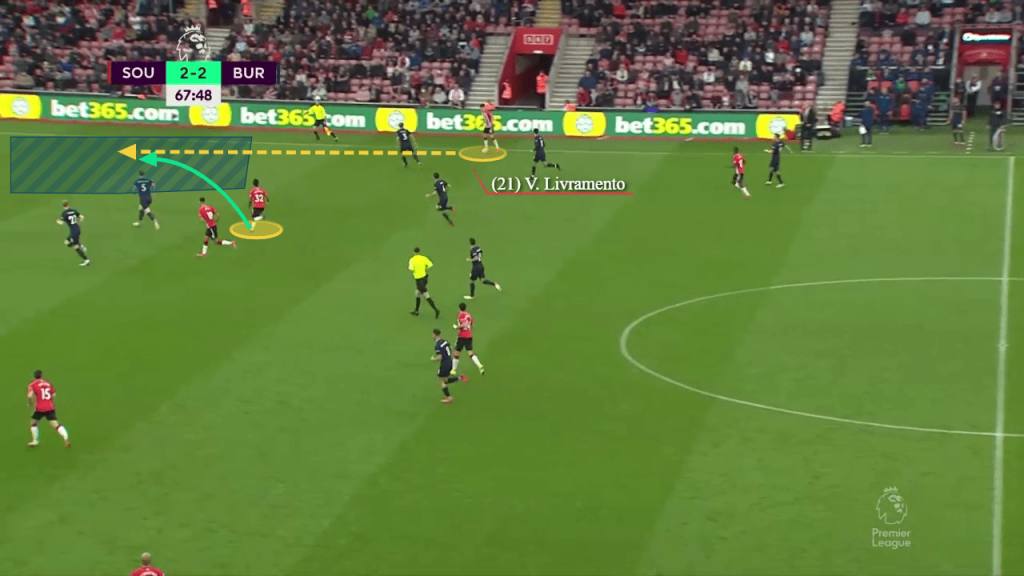 Always available for switches of play so he can stretch the defence horizontally or so he can use his dribbling prowess in 1v1 situations, hugging the touchline has given him a sound platform to shine. 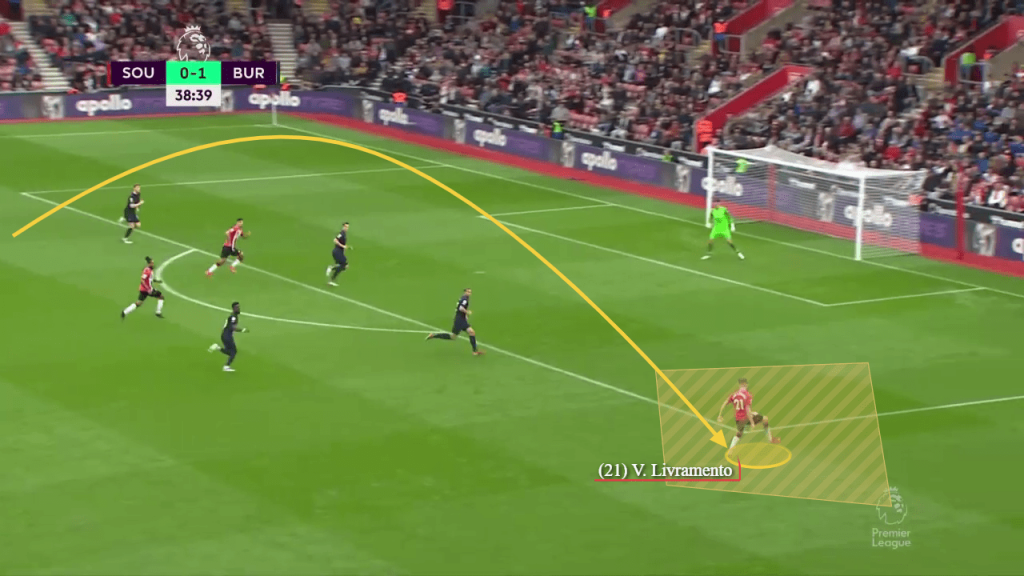 Upon focusing on his defensive efforts, and while he’s not as good in this phase as he is in the attacking one, there’s still many positives attached to his work here.

His aforementioned speed holds him good stead here too, enabling him to track runners in behind and in front of the backline, recover his position if he gets caught out or beaten, get back to support teammates or shut down counter-attacks. 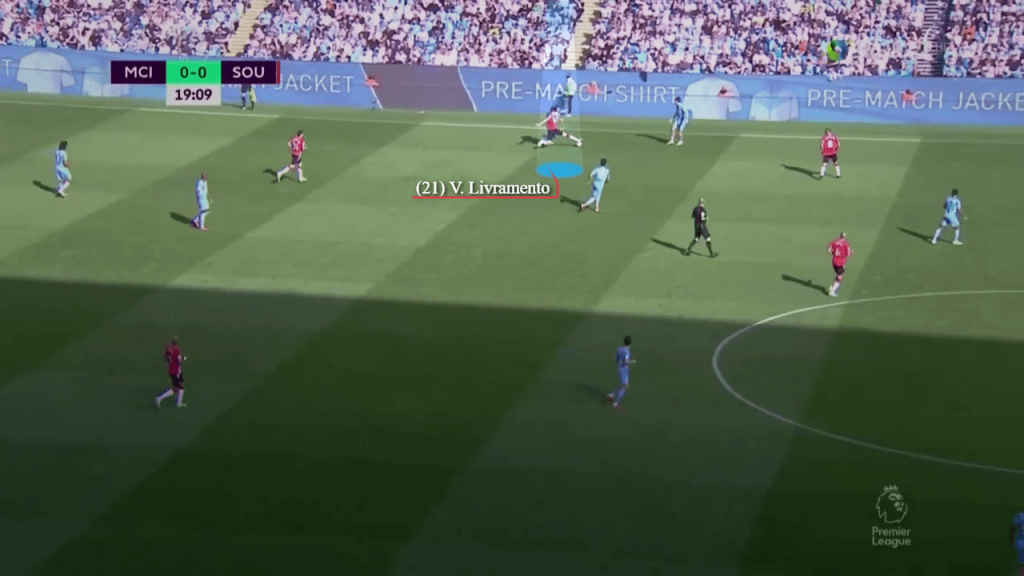 Feisty and committed in his duels, very agile to move in all directions and quick to react, this means he’s usually competent in 1v1 battles. Those long legs of his assist him here as well, allowing him to reach out or make himself as wide as possible.

Although he understands the need for improvement in this area, where he’s sometimes lost markers, got beaten aerially despite his rangy frame and been caught out of position, working under the meticulous Hasenhuttl, who has vast experience in imparting valuable defensive concepts to improve young players especially, should see him progress smartly in this area.

Seeing as a host of clubs were interested in snapping him up, including Brighton and Hove Albion, Arsenal, Manchester City, RB Leipzig, AC Milan and AS Monaco, they’d all be feeling a tad frustrated watching him strut his stuff for Saints.

Having clearly made the right step for his development, there’s every reason to suggest Livramento will continue on his remarkable upward trajectory as he keeps learning and assimilating to life in the Premier League.

Recently becoming the youngest defender to play 500 EPL minutes this season and already cementing himself at Southampton, it’ll be captivating to keep tracking his progress in what looks destined to be an outstanding debut campaign in the top flight.