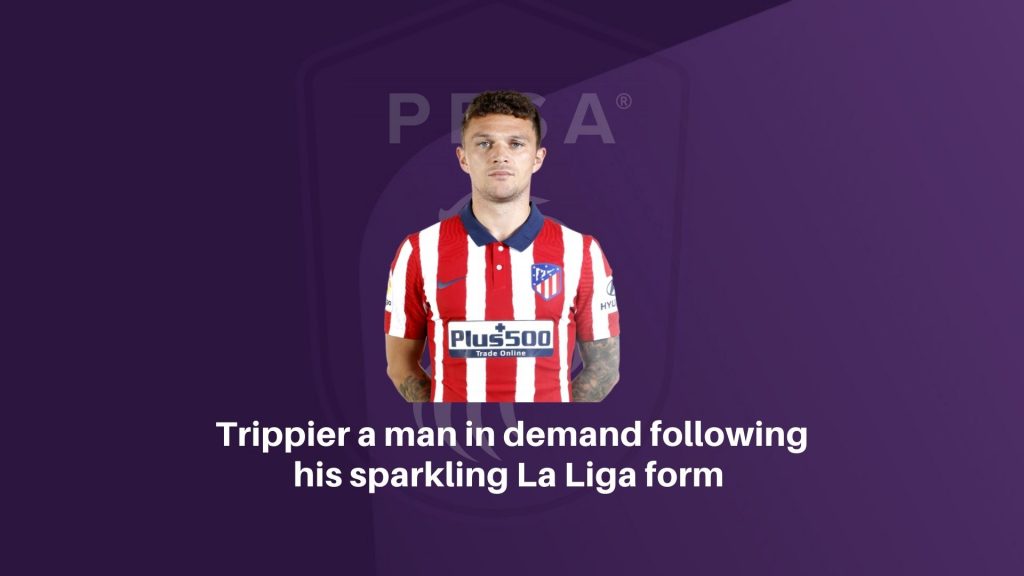 Kieran Trippier’s enjoyed a season to remember due to him winning La Liga with Atletico Madrid, which was then capped off by him being named in Gareth Southgate’s England squad for the Euros.

Although his campaign was interrupted following a 10 match ban for betting breaches, when he was available the 30-year-old was indispensable for Diego Simeone’s men.

Whether playing as a right back or right wing back, he was the Argentine manager’s first choice, as Simeone loves his commitment, energy, work rate and intensity.

As a result of his scintillating form, interest has reportedly emerged from Manchester United for his signature. Wanting to bring him in as competition for Aaron Wan-Bissaka, he’d certainly be a handy pickup. But considering he seems happy at Atleti and is loving his football in Spain, it’ll be a tough move to seal for the Red Devils.

Possessing so many of the desired traits necessary in a modern day full back, it’s understandable why they’re keen on the dependable wide defender.

Offering so much going forward, his barnstorming runs provide width and depth to his team’s attacks that importantly stretch backlines horizontally and vertically. Timing his runs to arrive at speed so he can continue his forward momentum once on the ball, this gives him a dynamic advantage over his foes to gain territory before executing his actions. Given plenty of licence to surge upfield, his presence has been valuable and enabled Atletico to get the likes of Luis Suarez, Marcos Llorente, Thomas Lemar, Angel Correa and Joao Felix to populate dangerous central areas. 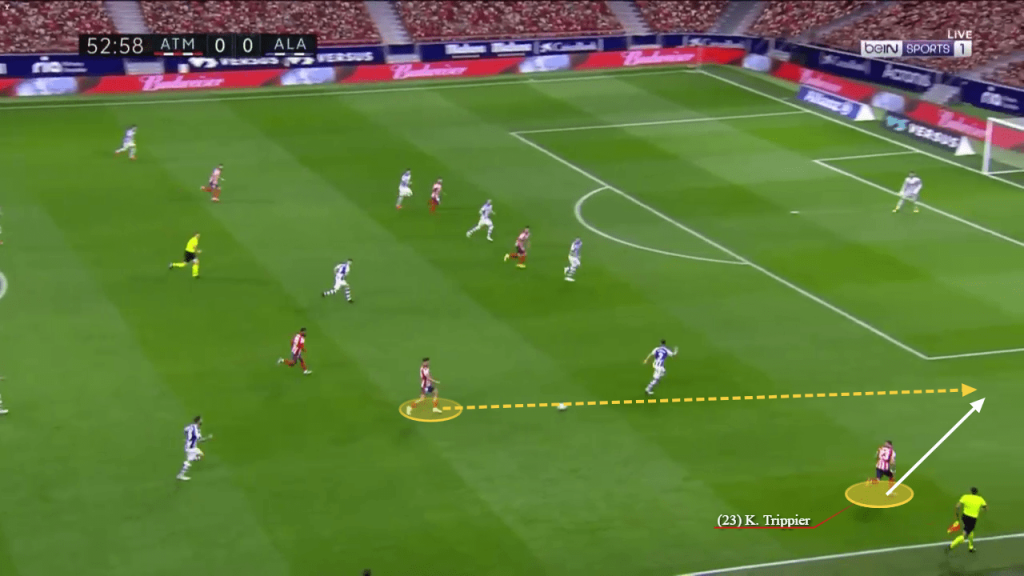 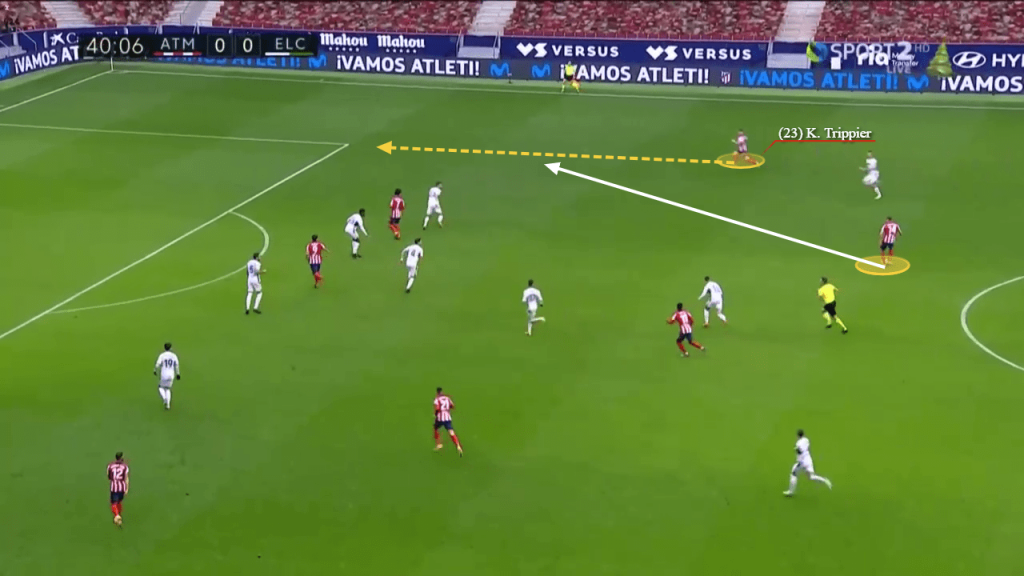 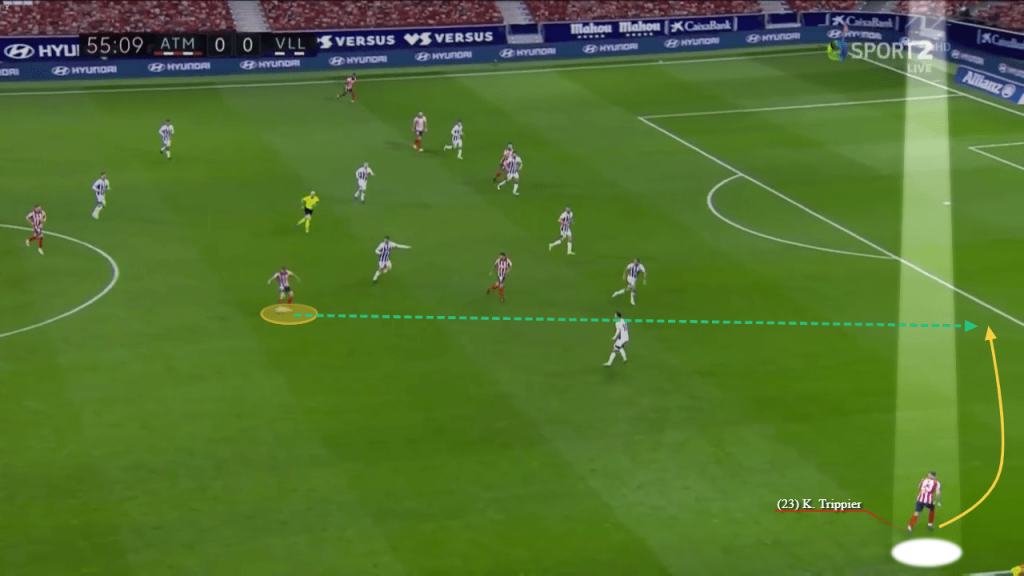 Due to his scorching runs that draw defenders out of position, this benefits the aforementioned attackers, who can take advantage of any gaps between defenders.

Although he’s had the most impact in advanced areas that gives him the platform to use his progressive passing in dangerous zones, he’s notably helped in build up too, where he varies his positioning depending on the opposition. Sometimes he’ll be higher, sometimes deeper and he also mixes up if he’s wider or more central. All this ensures defenders are faced with dilemmas whether to press him or stay put.

Another way he adds variety comes from how he supplements his pacy overlapping runs with some infield underlapping movements after rotating with a teammate. In doing so, this allows him to use his exceptional passing and ball carrying to find teammates, beat opponents or draw fouls in key central areas.

His movement frequently allows him to be in ideal zones to put his quality distribution to good use. Proving himself to be one of the premier crossers and ball users in La Liga, his silver service has meant he’s created a plethora of chances and laid on six assists.

To start with his crossing and through balls, Trippier tailors his deliveries brilliantly to generate quality scoring chances for teammates. Typically taking a tidy first touch and getting his head up to assess options, his vision and awareness of teammates’ runs sees him strike precise balls into the box and in behind.

Wrapping his foot around the ball sweetly and making fine contact due to his technique, he can hit a range of crosses into the box. Be it driven, curling, dipping, lofted deliveries or cutbacks along the floor to either the front, back post or centrally, he has a ball for any scenario. 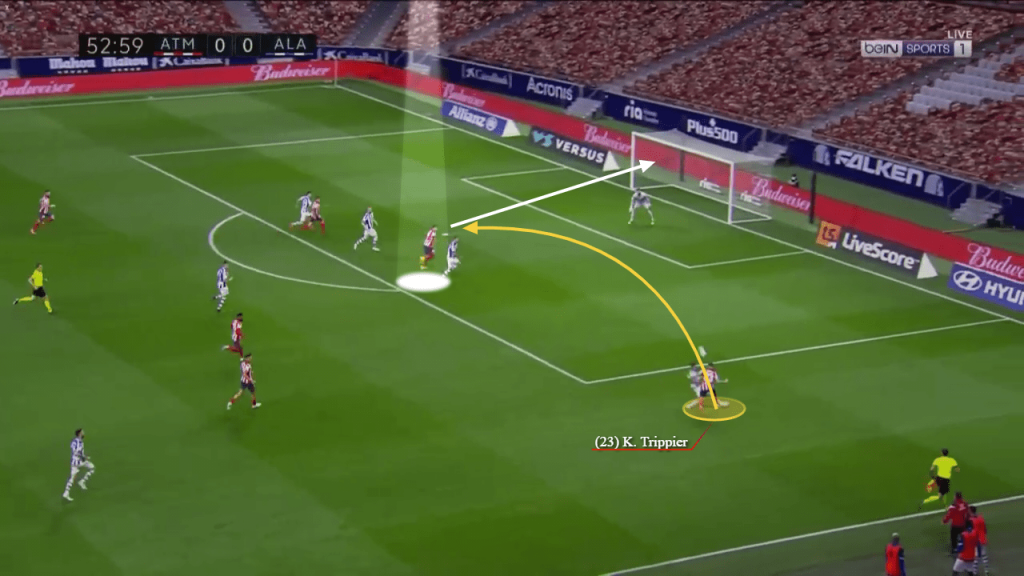 Able to remain balanced and composed ensures he can hit good crosses and passes in behind when under pressure and from a wide array of areas from wide or more centrally in the half spaces. 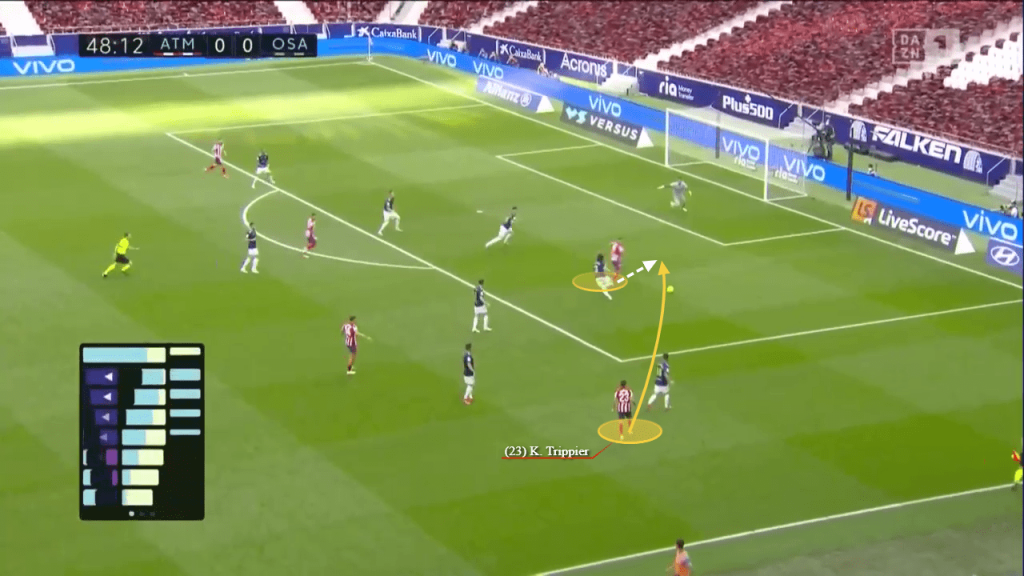 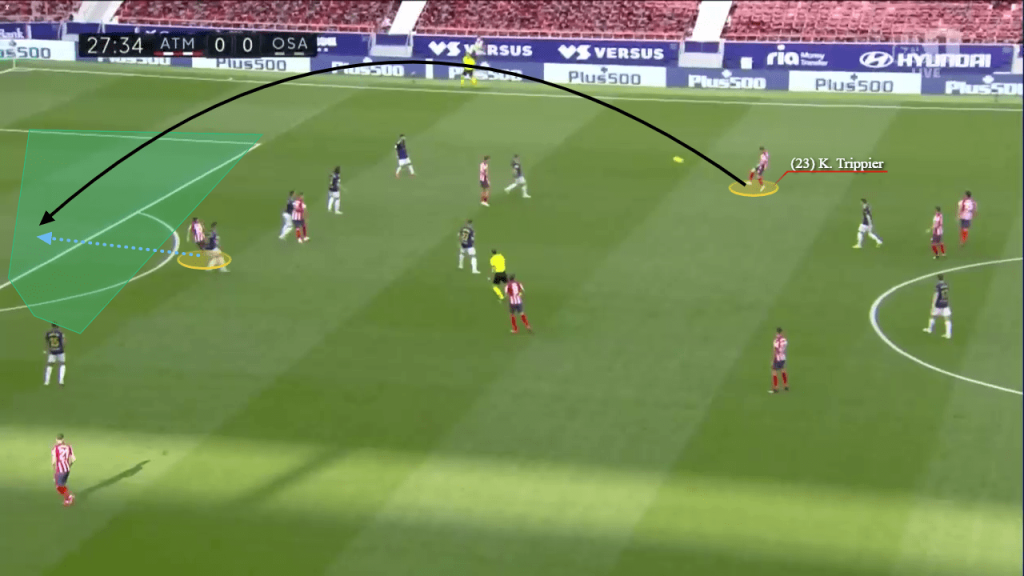 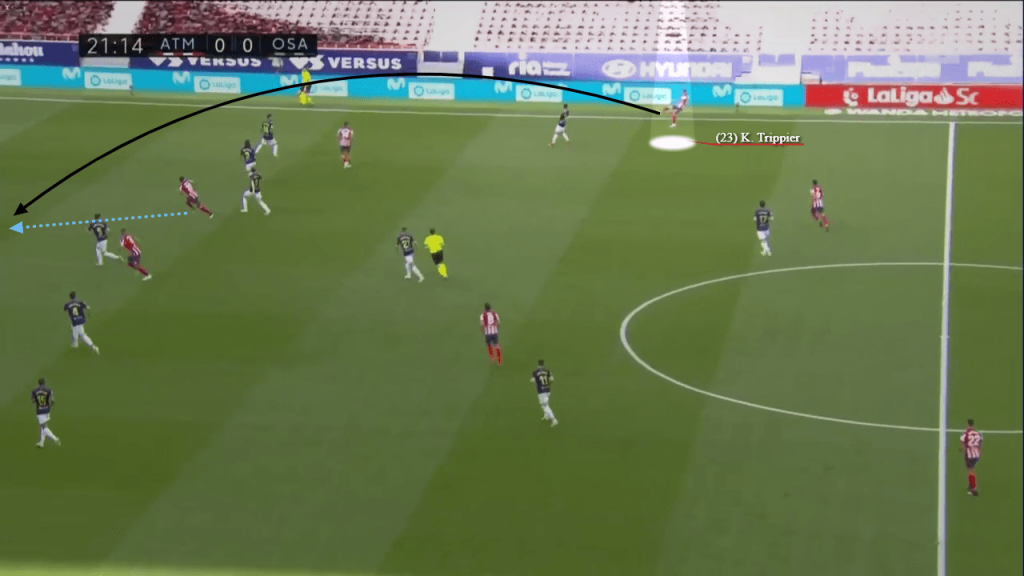 Trippier’s ability to hit one-touch passes at full tilt and set-piece prowess adds to his worth, thus further increasing his threat.

Seeing as he’s often afforded acres of room to run into, his ball carrying is served well in Simeone’s system as well, where he can use his pace, feints and shoulder drops to gain territory or unbalance opponents.

Meanwhile, when it comes to his defensive output, he’s been an instrumental component of the best defence in La Liga, which only conceded 25 goals in 38 matches.

Full of tenacity and fight, he relishes duels and confrontations with opponents by applying vigorous pressure when cues arise to make life as difficult as possible for his foes.

Handling 1v1 duels admirably, he gets into a powerful posture and is quick at reading the intentions of his marker to react sharply to give him a chance of stopping them. Hard to outmuscle, the man with a low centre of gravity rarely loses a strength battle, thus enhancing his ability in isolation battles. 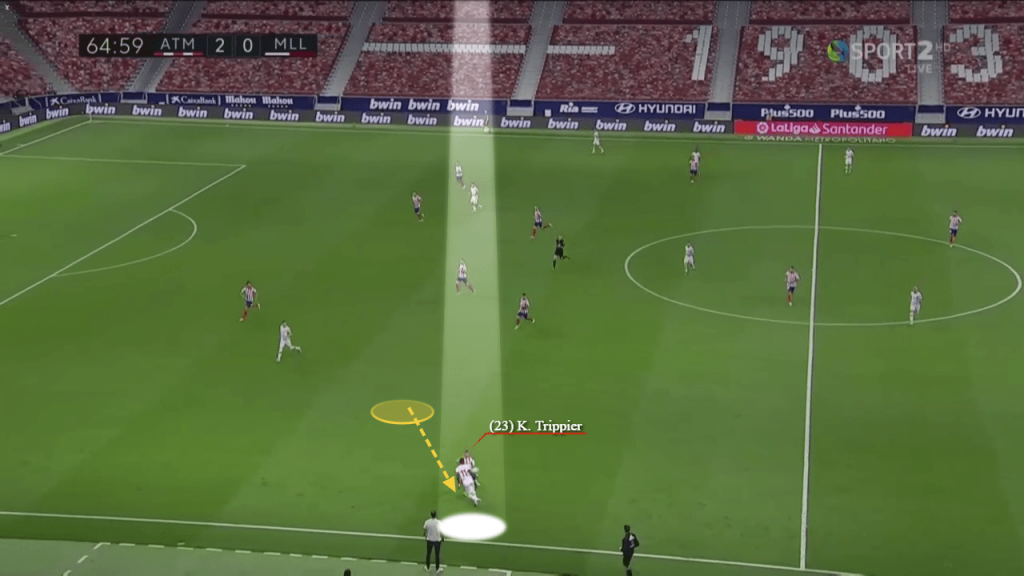 Adapting to Simeone’s demands, he’s shown excellent discipline and organisation to keep his shape and know when to drop back, shift across, step out, support a colleague or take on a marking assignment.

Alert to blindside runners, picking up when his man drops deep and competent in aerial duels are all important strings to his bow that serve as a testament to his concentration and reading of the play. 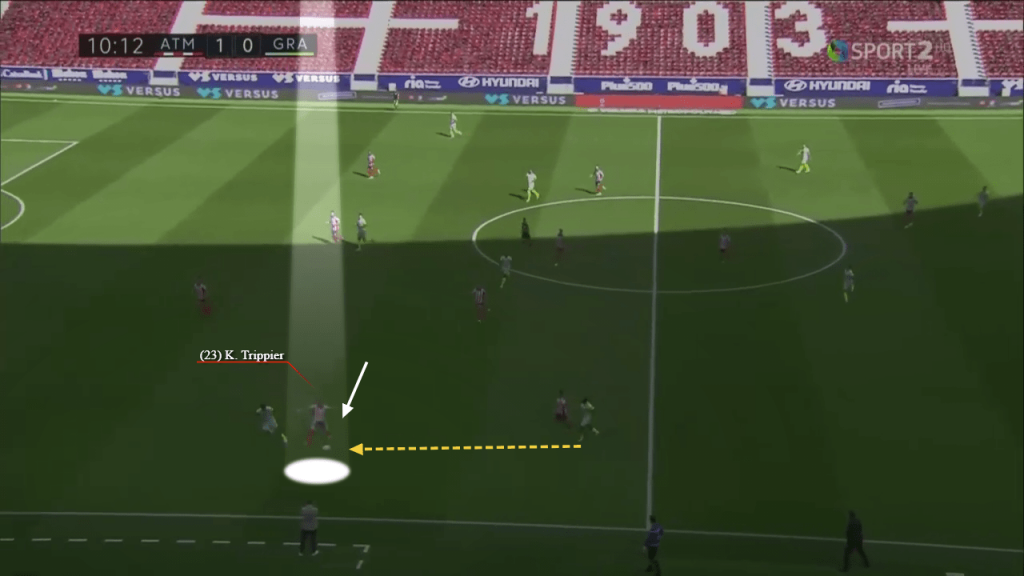 Knowing his role inside out and what’s expected of him collectively and individually, Trippier’s durability and reliability has been key towards him nullifying adversaries on his side of the pitch. “As a team we are so strong defensively, we keep our shape and we run ourselves into the ground for each other,” he aptly stated.

It was interesting to see his comments on his England manager, Southgate, and Simeone, with him noting the pair share similar characteristics, explaining: “The style of play, tactically Gareth’s brilliant, so is Simeone.

“They’ve got similarities, the way they set the teams up and the way they are as characters. A little bit different character-wise because Simeone is just absolutely crazy, as you can see on the touchline, sprinting down the tunnel when we won the other day, but both fantastic managers.”

Confident and on top of his game, it would seem unlikely he’ll be leaving Atletico Madrid in the summer, for he appears settled and happy in Madrid working under a manager who fully appreciates him.

All the transfer talk will have to wait for now though, as Trippier’s sole focus will be on helping England win the Euros, which would be the perfect end to what’s been a magical season.