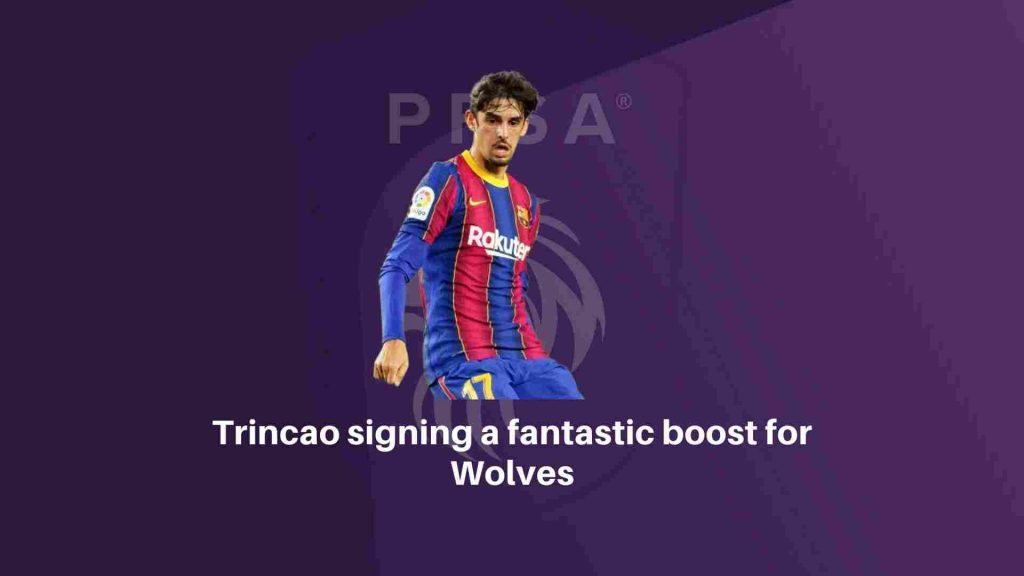 Wolverhampton Wanderers’ signing of Francisco Trincao on a season long loan from Barcelona has been one of the standout pieces of business in the transfer window so far.

Proving what a tremendously gifted talent he is during his time with Braga, at Barcelona and with the Portuguese national team (across a range of age groups), he brings some valuable quality to Wolves’ offensive ranks.

Although he did impress in parts over the course of his 28 La Liga appearances last term, which only consisted of three starts, Ronald Koeman’s switch in formation to a 3-5-2 saw him battling for minutes due to him not being a natural fit in this shape. Finishing the season with 683 minutes of league action that included a decent return of three goals and two assists, he certainly showed many glimpses of his class.

Clearly wanting more playing time for the 2021/2022 campaign, Wolves is an ideal destination for him to obtain this and test himself in the hugely demanding Premier League. The fact he’ll be working under newly installed Portuguese manager, Bruno Lage, and will have six of his countrymen as teammates should ensure he settles in nicely too. “We have a large Portuguese contingent, and they look after each other well, but are also integrated in the whole group. They’re really hard-working, with a good mentality, so I’m sure he’ll integrate well and settle in quickly,” explained Wolves technical director Scott Sellars.

“With the manager’s Portuguese background, he knows him and speaks very highly of him, so he’s a player we’re very excited to be bringing to the club.”

With Lage expected to play a 4-3-3, this should suit Trincao beautifully, for the classy left footer, who prefers playing on the right before cutting in but can also play in a central role or on the right, will be given an ideal platform to shine.

Technically elite, unpredictable and full of class with the ball at his feet, his razor sharp ball control and repertoire of moves to beat opponents ensure he’s a nightmare for defenders to handle. Quick thinking and fleet footed, he regularly outfoxes adversaries with stepovers, feints, shoulder drops, faked passes and shots and slick turns away from danger. 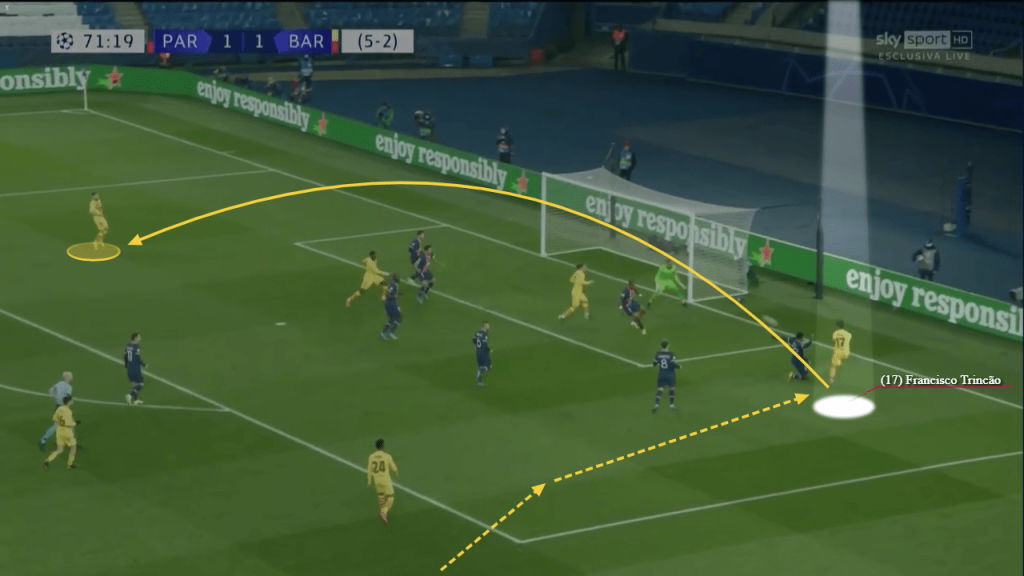 Whether receiving with his back to goal, forward facing or in an open posture, it’s been impressive how he can beat opponents in most situations due to his nifty skills. In addition, it’s been good to see him adjust his body shape prior to receiving so he can spin away from danger, protect the ball or immediately use his first touch to bypass a marker.

Oozing confidence and ambition in his ball carrying, a key byproduct of his dribbling arises from how he can win fouls in advanced areas and commit multi markers to free up space upfield for teammates. “He’s a player who drifts past people and he has a great change of direction when he’s moving with the ball. He has great speed over two or three yards, to change direction and get away from people, can score and create, and is an exciting player,” Sellars mused.

“He’s a really exciting player. It’s an area we’d like more competition, in terms of wide players. I think the fans are going to enjoy watching him play, he drives with the ball well and has good creativity.”

Shifting the focus to his distribution, and the Portuguese international’s creativity and vision enhance his danger in the final third. Be it via angled through balls in behind, measured balls over the top and crafty crosses and cutbacks into the box, he’s a solid chance producer. 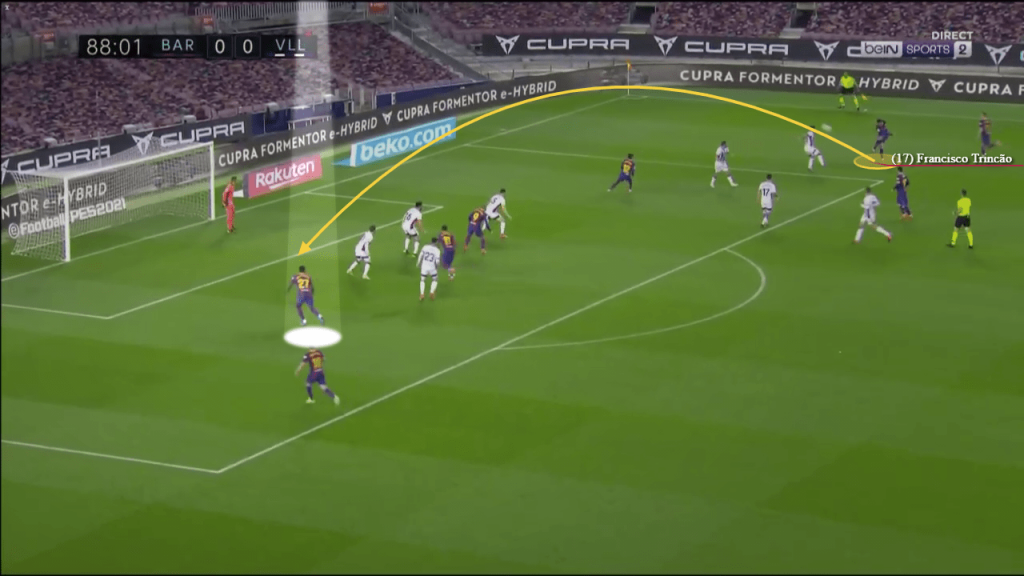 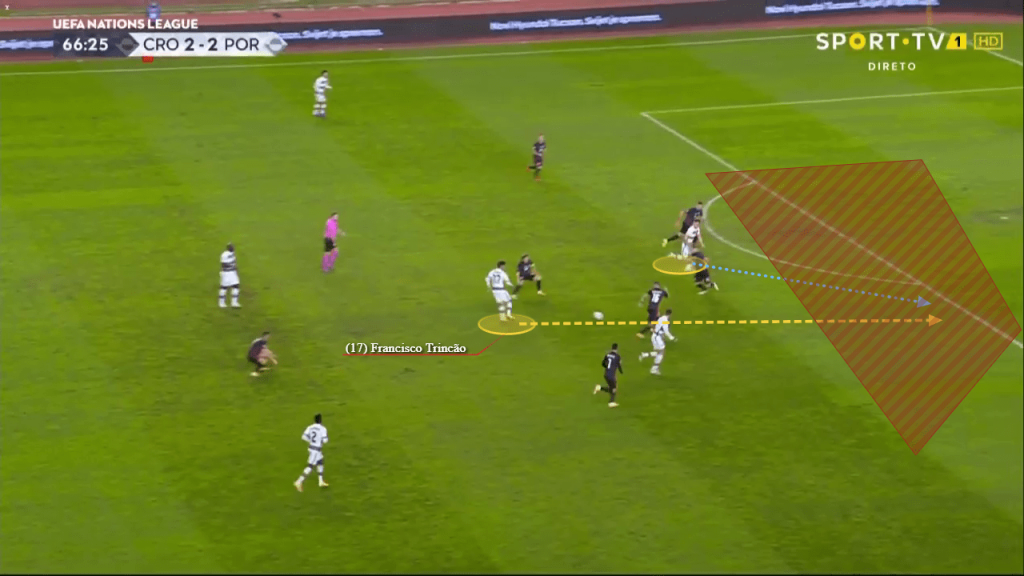 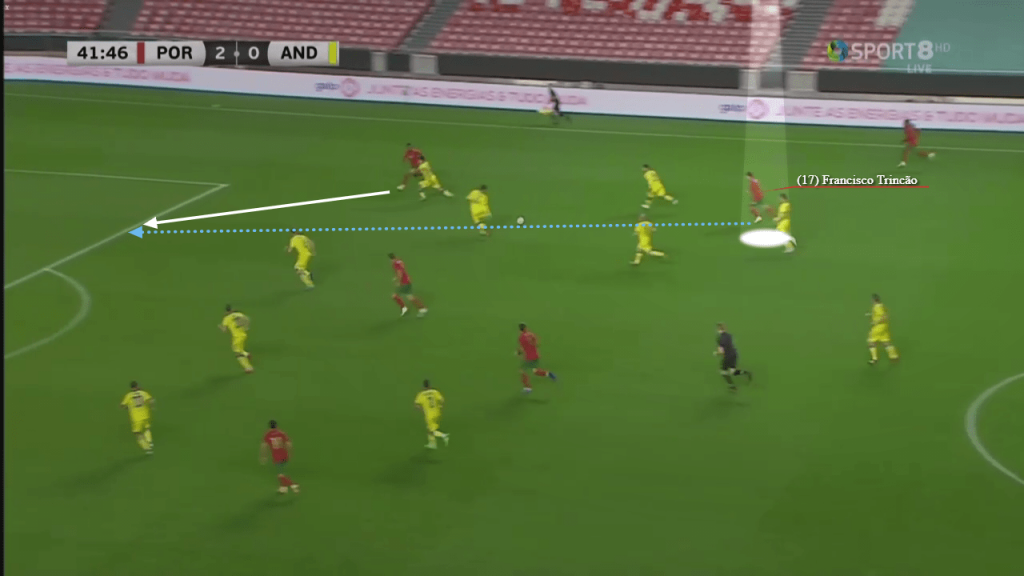 Able to hit his deliveries with power, whip and dip this adds to his menace, for he can pinpoint targets in good offensive areas, which is especially evident after gaining separation from his marker in wide areas.

Able to use all parts of his foot, Trincao’s link play using flicks, backheels and one touch passes comes in handy when breaking down deep defences too.

Possessing a keen eye for goal and usually taking considered shots, this is an important aspect of his armoury. While cutting inside onto his left foot is where he produces the most threat, he can also strike long range efforts, composed 1v1 finishes vs. the keeper and take up good positions in the box to fire off close range shots. 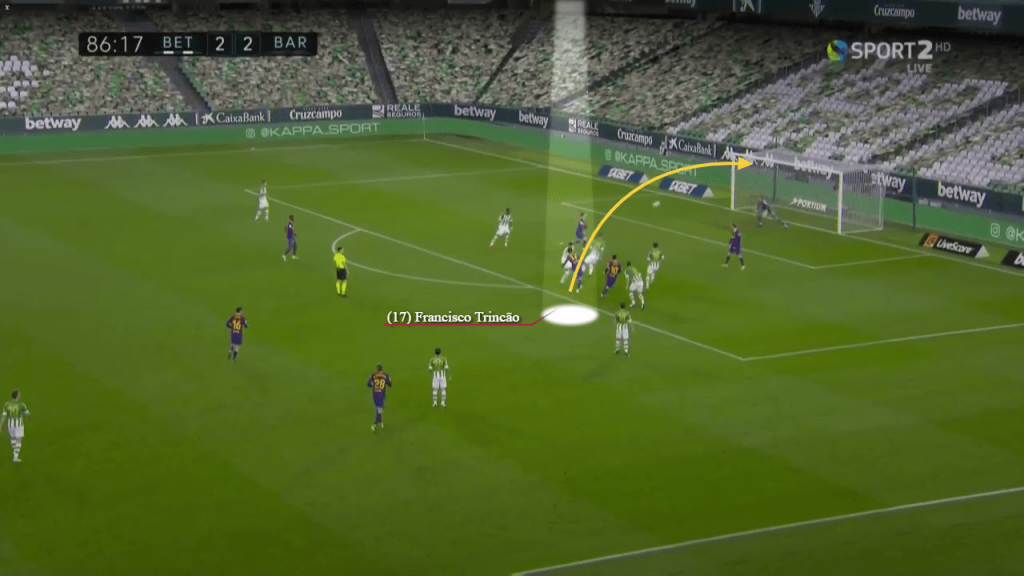 The former Braga star’s movement ties everything together nicely. Good at bursting in behind and making out-to-in blindside runs into depth, these stretching movements have seen him get into some excellent positions to wreak havoc in the final third. Indeed, the fact he’s blessed with good pace, this, in combination with his timing, means he’s a weapon both in transition sequences or in methodical build up. 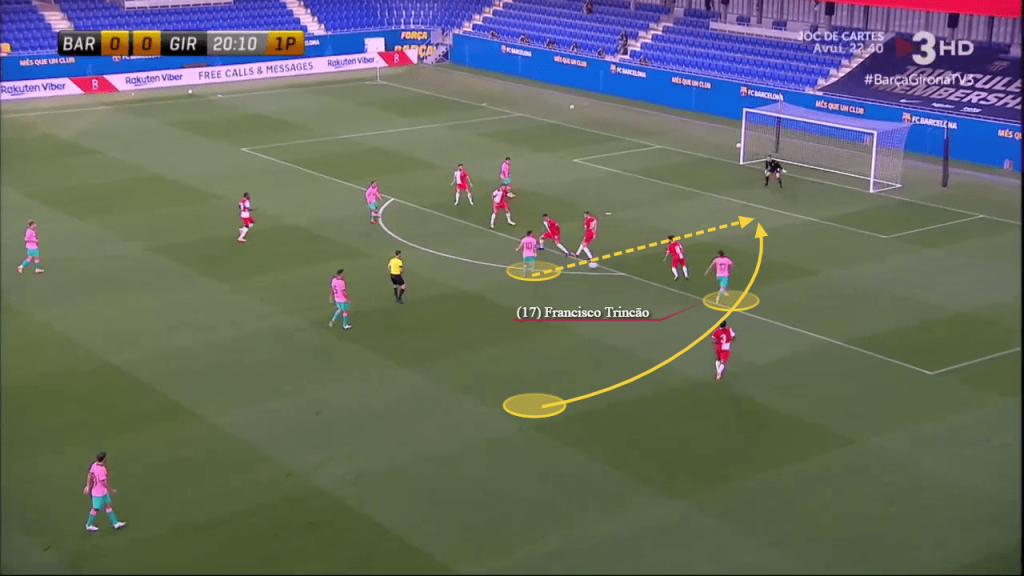 Supplementing the aforementioned with his ability to venture infield to find room in between the lines, this allows him to not only connect play, from overloads and get on the ball with more time, but also manipulate defenders who are unsure if they should follow him or not. 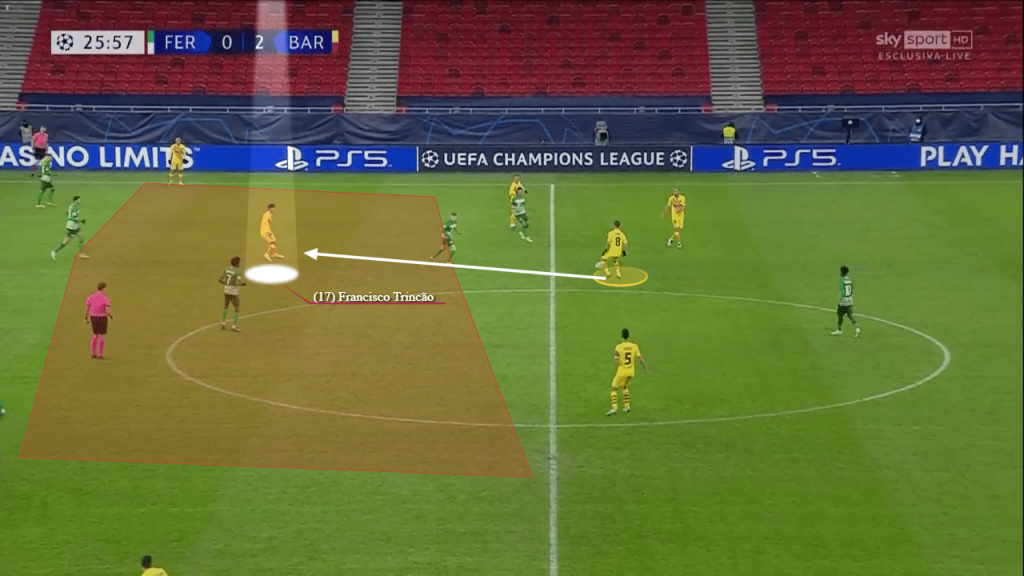 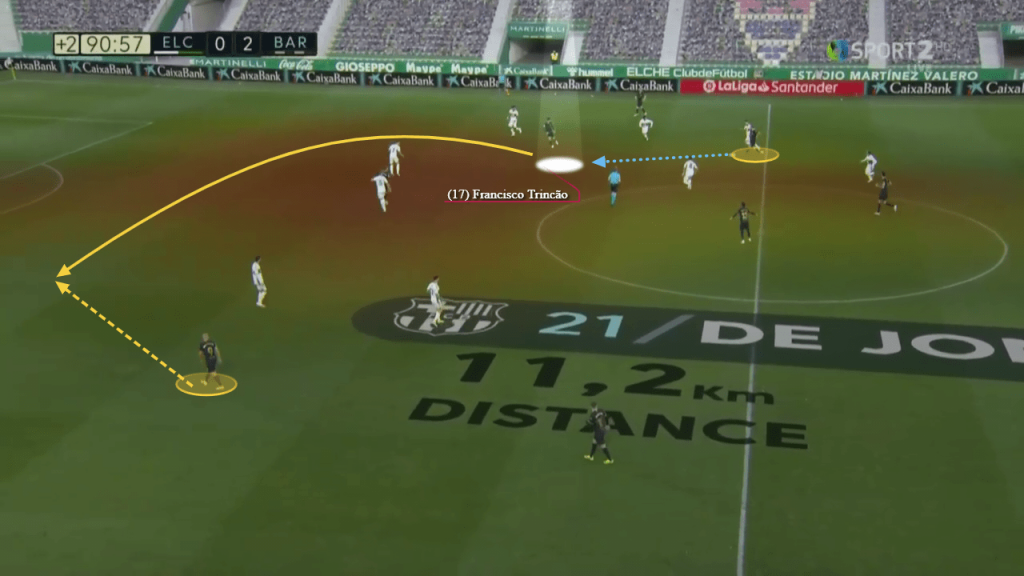 A player who’s already at a high level and who crucially still has plenty of scope for improvement, the capture of Trincao should give Wolves huge offensive impetus due to his capacity to hurt opponents in a variety of ways.

Wanting some crucial playing time following his Barcelona stint and eager to hit the ground running, seeing how he settles into life in the Premier League will be intriguing, which will surely be made easier due to the strong Portuguese contingent around him.

Once up to speed, Wolves’ fans will be in for a treat watching him, for he’s unquestionably one of the most exciting young players in European football who’s got all the raw ingredients to become a bonafide star in the future.