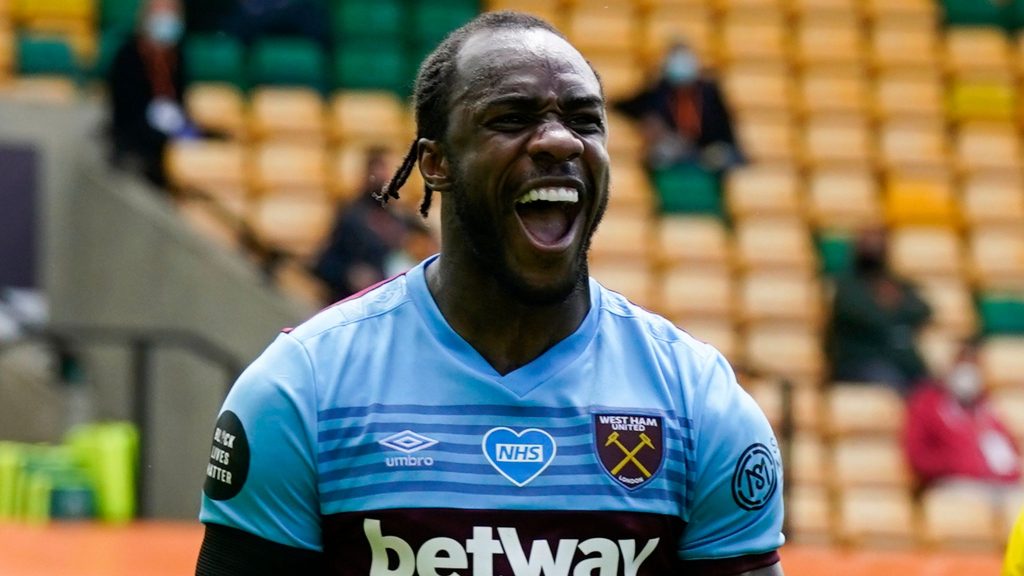 West Ham are currently flying high. Unbeaten in their last 5 league matches (7 if we include their FA Cup wins v Stockport & Doncaster) and lying a healthy 7th place in the league.  Quite rightly the likes of Soucek, Rice and Bowen have all taken plaudits this season. However, it’s one player who’s been a hammer since 2015 that we are going to analyse in more detail. That player is Michail Antonio. We’ve always know the qualities Antonio possesses; pace, power and physicality but his Achilles heel has always been his ability to stay fit. If Moyes can keep him healthy, there’s no reason why West Ham’s selfless striker can’t help continue their good run.

In July 2019, West Ham broke their transfer record to bring Sebastien Haller from Eintracht Frankfurt for £45million. The Ivory Coast forward had bagged 33 goals and 19 assists in 77 matches for Frankfurt. However, after a string on un uninspiring performances and just 10 goals in 48 PL matches he was shipped to Ajax for a significant loss. Although Haller had a physical presence at the top of the pitch, he lacked the lethal combination of pace and power to occupy PL defenders which Antonio possesses in abundance. He also lacked the selfless work rate of Antonio.

We only have to look 2 minutes into West Ham’s recent victory over West Brom to see Antonio doing what Antonio does best – holding up play and allowing West Ham up the pitch. It’s clear how much West Ham players’ trust Antonio’s ability to hold the play; with 4/5 players moving into more advanced positions. Clearly their defence has performed admirably this season, but Antonio’s ability to allow West Ham to secure possession (thus reducing opposition transition threat) has played a part in that; they have currently conceded the same amount at Champions Liverpool. 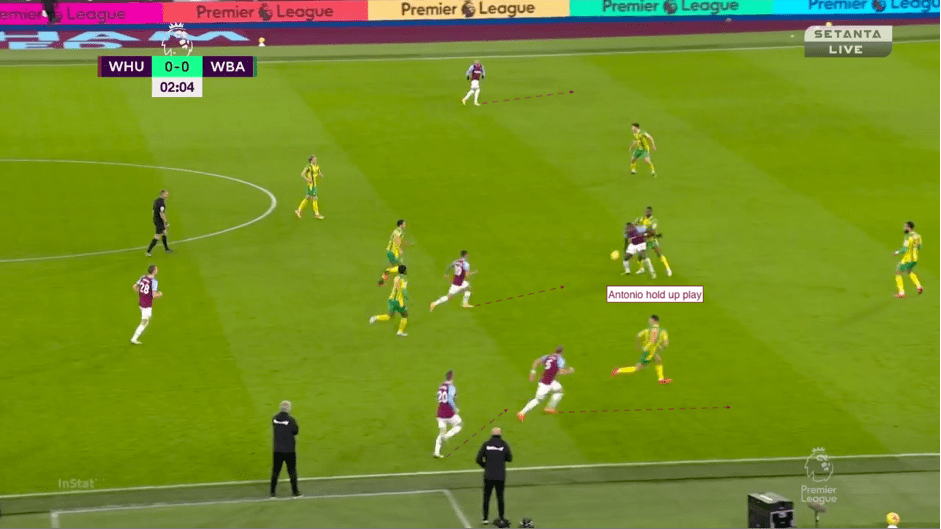 Opposition defenders know they need to get tight to Antonio as his pace and power (if allowed to turn) is a real threat. This opens up space for the like of Bowen, Benrahma and Lanzini to attack the space behind whilst Cresswell and Coufal can support from deeper where they see fit. Antonio is never going to be a 30 goal a season striker for the very top PL clubs. However, his overall skill set offers West Ham a real platform in which they can build their play as well as offering variety in terms of passing options and movements. 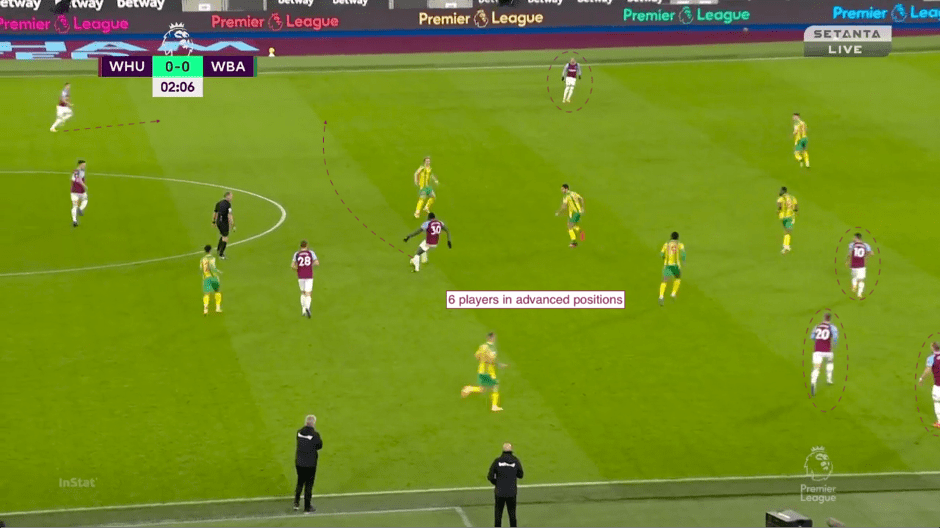 Just five minutes into the match and who is making a defensive header on his own penalty spot from a West Brom deep free kick? Antonio of course! His next action takes him to the final 1/3 where he occupies two West Brom defenders before playing a perfectly weighted pass behind for the overlapping Cresswell to cross…. corner to West Ham where Dawson arguably should score. We have to wait until 14 minutes to see his first run into the space behind. With Bowen in a more central position offering to feet, Antonio gets his chance to run into the channel and duly obliges. It’s probably in this moment where his abilities really outshine those of Haller. His pace and power allow him to win the foot race to the ball (holding off Bartley and also attracting the recovering Gibbs) before getting his cross away. West Ham’s other forwards are not quite able to make up the ground into the box but another dangerous moment created through our man Antonio. 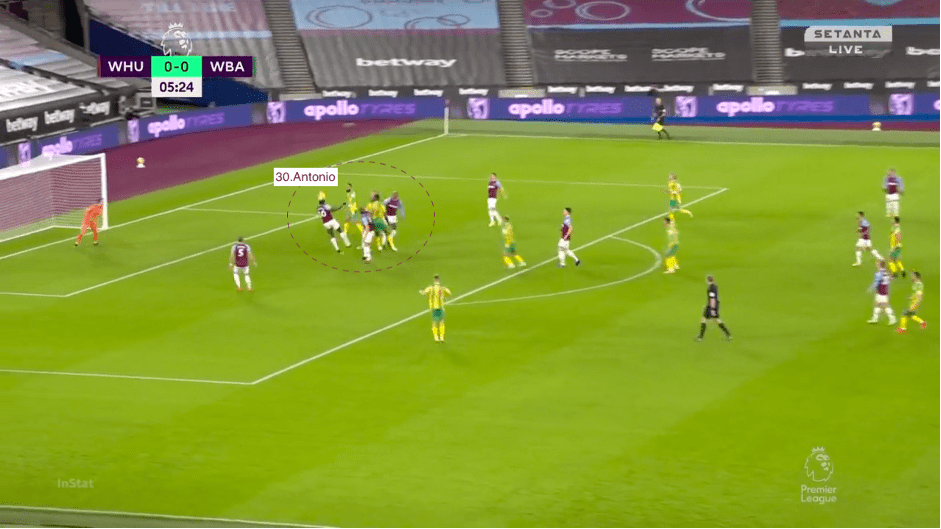 At various points during the first half, Antonio is not only able to hold off West Brom’s 1.93m, 83kg centre back Sheyi Ajayi but actually physically dominate him! That’s some feat by the West Ham forward and who is likely to be in a select group of 1-2 current PL strikers who could repeat that trick. That physical presence (coupled with his work rate), allows him to strike fear into opposition defenders and force simple mistakes. A prime example of this was on the brink of half time when again, Antonio has set off into the channel. He was never going to win the race with Ajayi on this occasion, but those previous battles had certainly left scars on the West Brom centre back. With Antonio in close proximity, Ajayi under hits his pass to team mate Bartley who is forced to slide the ball out for a West ham throw in. Out of absolutely nothing, Antonio wins his team a final 1/3 throw in and gains them 40-50 meters in the process. 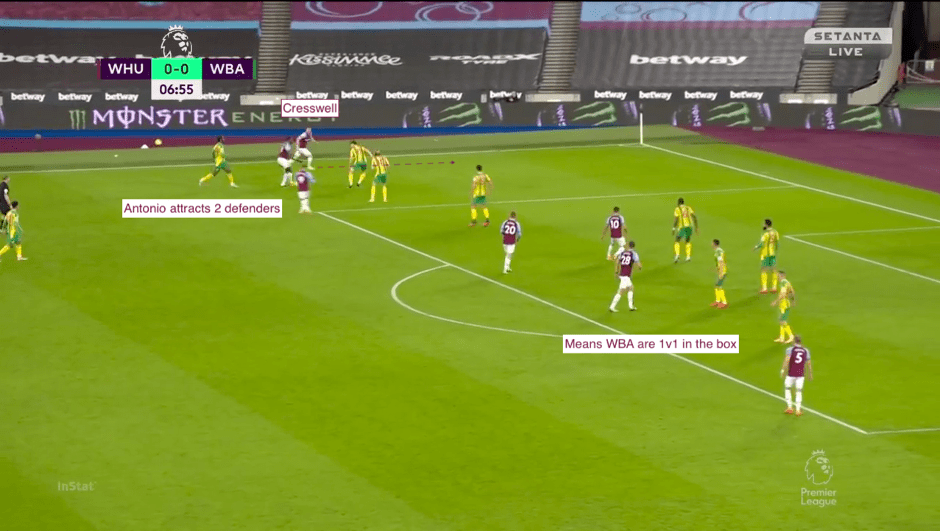 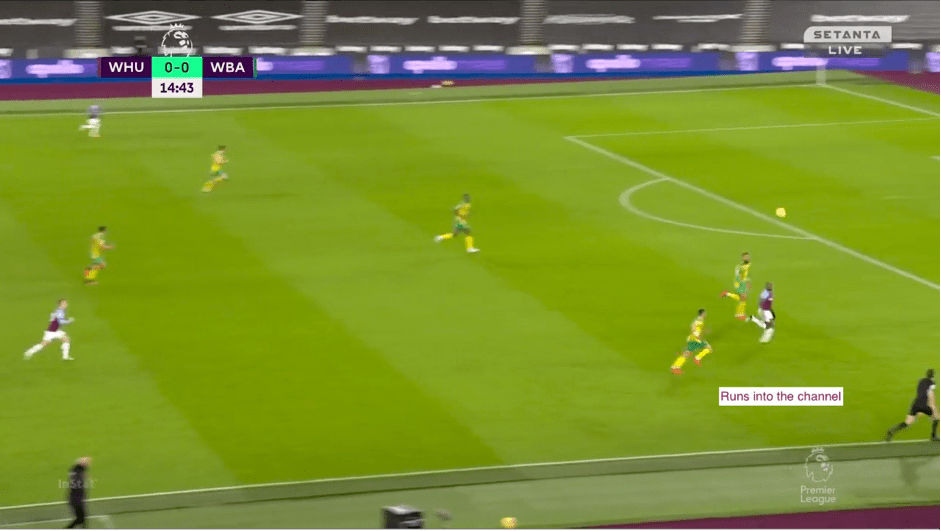 The second half begins and West Brom wipe out West Ham’s 1-0 lead through Pereira’s 51 minute rocket. With all his positive play in the first half, West Ham now need their #9 to do what he’s employed to do….score goals. Before we get to his 66’ minute winner, we get a glimpse of Antonio’s threat in the box; this time in the shape of selfless set up play. He receives a fine pass from Bowen with his back to goal at the edge of the 6 yard box (a position where most #9’s are going to try to manufacture a shot for themselves). Antonio shows great feet to quickly control with his right and pass with his left to the on rushing Lanzini who blazes over and really should score.

The match winner’s positioning in the box allows him to grab West Ham’s 65th minute winner. For the umpteenth time, West ham commit good numbers forward for the cross of Cresswell. Sub Yarmolenko un selfishly head backs across to the middle of the goal where Antonio cleverly swivels and volleys West Ham to a 2-1 victory. Once the initial cross goes over his head, he continues to move and get himself into a position where the ball might fall – not bad work for a plyer who’s spent most of his career on the wing.

Antonio has been available for 11/18 PL matches so far, if he can stay fit for the majority of the rest, then there’s no reason West ham’s charge for Europe can’t continue. 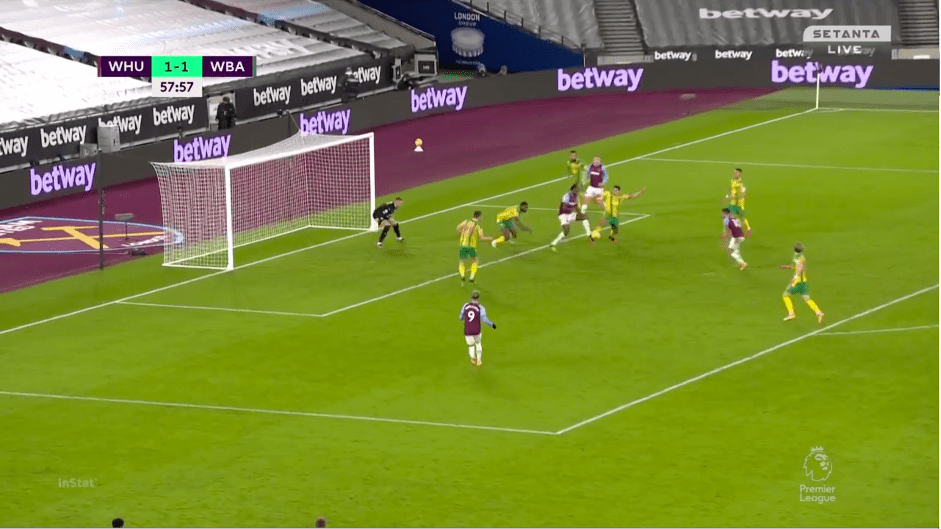