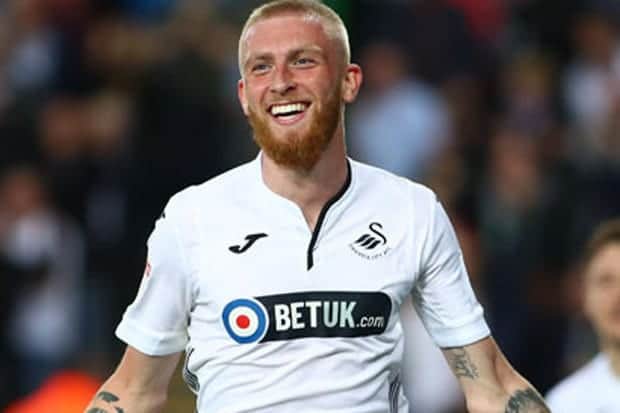 After scoring five league goals in January, more than any other player in the Championship for the month, Oli McBurnie will be keen to get back to his solid form as he gradually recovers from illness, in order to help propel Swansea City into a coveted playoff spot.

Although it’ll be a stern test to get there, Swansea, who currently sit nine points behind sixth placed Bristol City, will be relying on their crafty big man to continue banging in the goals needed to propel them up the table.

Despite the club departing with some key players in January, McBurnie always backs himself to score, for he plays with confidence and swagger, so he’ll relish the task at hand. Mcburnie’s the first to recognise he could be more deadly in front of goal, but the man who’s registered 14 league goals is nonetheless a sound finisher, capable of scoring in a variety of ways. Whether it be headers, crafty dinks, tap ins or cool finishes when 1v1 with the goalkeeper, his execution and capacity to use different surfaces of his foot and head has been notable.

The cornerstone behind his aptitude in the aforementioned comes in the form of his positioninal sense, for he knows where to move in order to maximise his chances of finding the back of the net. Timing and angling his runs in behind effectively, he does a great job of getting free of his marker so he can embark upfield unimpeded. 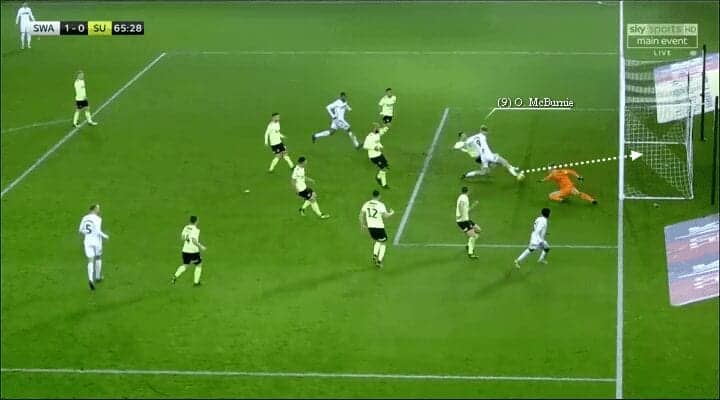 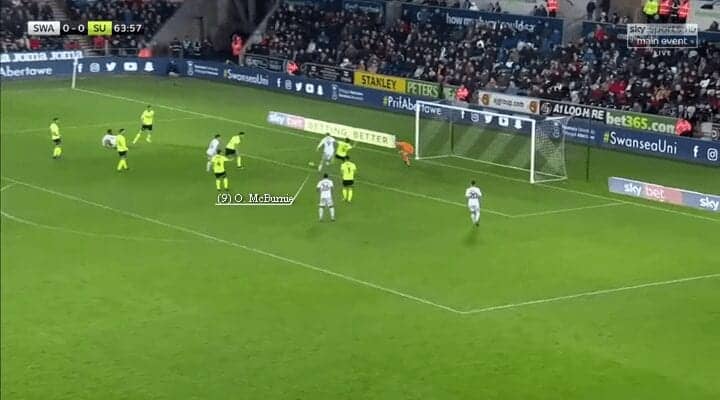 Adept at using cunning changes of pace, unbalancing decoy maneuvers, knowing when a defender’s attention is drawn away and targeting his runs between defenders or in the vacant channel behind the fullbacks, McBurnie undertakes his runs with conviction. 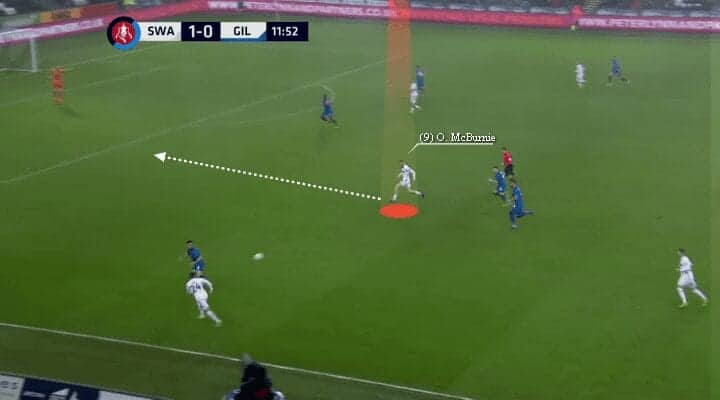 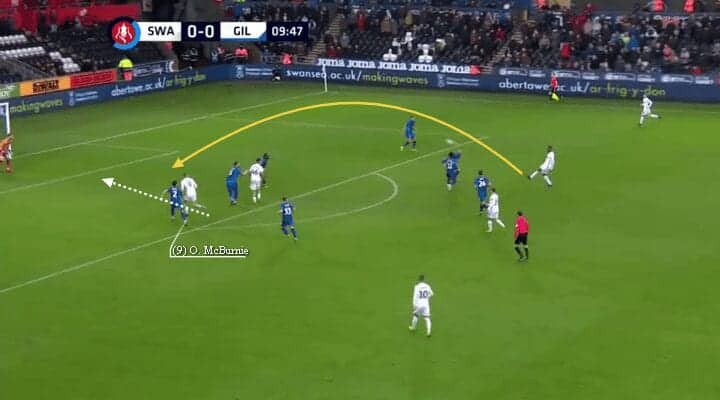 Moreover, if not providing depth to the attacks, he capably checks towards the ball to link play. Using his strength, clean first touch, neat ball control and eye-catching skills, the technical forward acquits himself well under pressure. Remaining composed and unfazed by the harrying, he can either roll his man, protect the ball, play a neat first time ball or twist and turn away to wriggle free of their clutches. 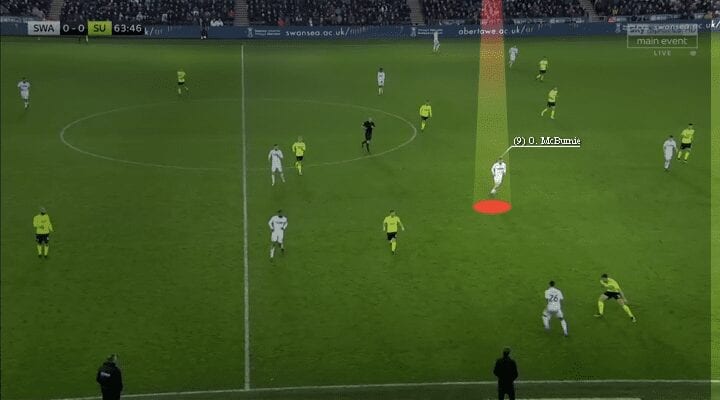 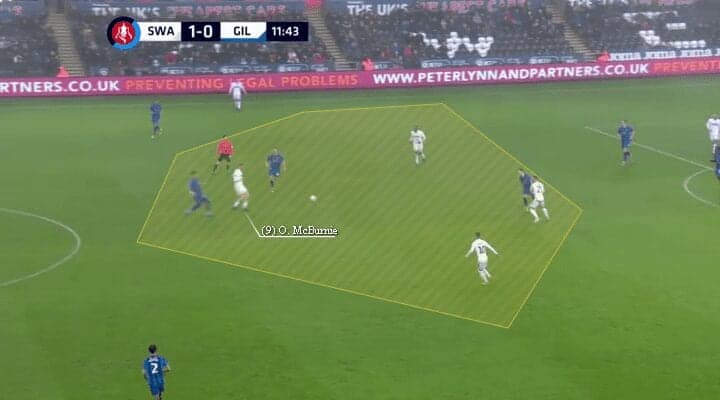 Aided by his long legs and the way he receives in ideal postures, this only compounds issues for defenders trying to stop him.

The languid striker accompanies the afore with a tidy range of passing, which enables him to partake in crisp combination play, shift the angle of attacks, be the catalyst for counter attacks and play in his colleagues with nifty through balls. Intent on progressing whenever possible, he’s always on the lookout for ambitious passes in order to unlock or destabilise his adversaries, something his four assists underline.

Moreover, possessing a solid leap and able to pick up the ball’s flight quickly, the Scottish international’s aerial prowess is a big asset to the Welsh outfit too. Standing a towering 188 cm tall, he’s a very challenging man to outfox and outmuscle in headed duels, as he uses his frame and body positioning to give him every chance of coming out on top.

This aspect of his armoury duly serves him nicely in many scenarios, including goal kicks, set pieces and throw ins, thus enabling him to set up teammates with flick ons or knock downs, plus to power or place his efforts on goal.

A multifaceted presence upfront, who continually causes dilemmas for his opposition, McBurnie’s showing what a vital component of Graham Potter’s well coached team he is. And his tactically astute manager is clearly relishing working with the talented 22-year-old, saying: “Oli is an unselfish guy. He isn’t bothered whether he scores goals as long as the team do well, although he likes to tell everyone if he has got an assist. He’s got a knack of popping up and scoring.

“He has had a period where he has learned a lot I think. He will be a better player and better person for it.”

McBurnie’s himself is definitely enjoying working under the former Ostersund boss, for he’s been full of praise for the positive impact he’s had since arriving in the summer. “You can see the difference from the last couple of seasons just within the team spirit,” McBurnie said.

“I could see the boys smiling while we were playing and that’s something I’ve not seen for a long time. It’s just a good place to come in to work every day. And it’s such a good dressing room now, in terms of players wanting to learn, wanting to fight for each other, and for the manager. I can’t speak highly enough of him.”

With still so much scope for improvement, the former Barnsley hitman’s challenge will now be to maintain his output as the final third of the campaign will be pivotal in deciding who makes the playoff spots.

If he can remain focused on the task at hand and listen to his meticulous manager, there’s no reason McBurnie can’t drive his side forward in what will be a captivating run home.