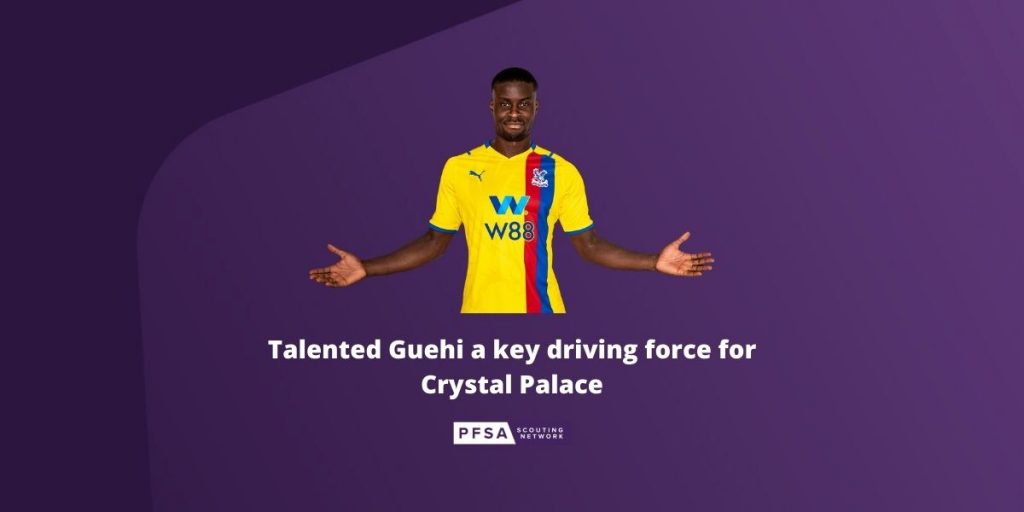 Marc Guehi’s exemplary form for Crystal Palace this season has not only seen him emerge as one of the finest stoppers in the Premier League, but also earned him a deserved call up to the England squad.

Having joined the Eagles last summer for £18 million from Chelsea, where he rarely got a look in and instead developed his craft at the senior level during a fruitful loan spell with Swansea City under Steve Cooper, he’s adapted amazingly to the demands of the elite division.

Thriving working with Patrick Vieira and quickly gaining the trust of his manager, Guehi’s become a mainstay for Palace. Having started and played all 90 minutes in 29 of his team’s 30 league matches, this offers a testament to his value to the side, with only Tyrick Mitchell obtaining more minutes than him in the squad.

“He really wants to fulfil his potential and his work ethic and concentration is really good,” Vieira said. “This is why I believe he has the attributes to one day be an international player.

“He’s really calm and composed and his competitiveness is unbelievable. It’s a pleasure for myself and my staff to work with him.”

Looking right at home at the highest level, the man who spent 14 years with Chelsea has operated with impressive composure and assuredness, on his way to contributing heavily on both sides of the ball.

To begin with his defensive output, and he typically positions himself adequately to deal with nearby threats, which gives him a solid base to work with. Very attentive and constantly checking his nearby surroundings, this ensures he knows where to be situated in relation to opponents and his teammates.

Moreover, after processing all the information at hand, Guehi’s showed great decision making by knowing whether he needs to shift across, tuck in closer to his defensive partner, push up, drop back, track a runner or support a teammate. 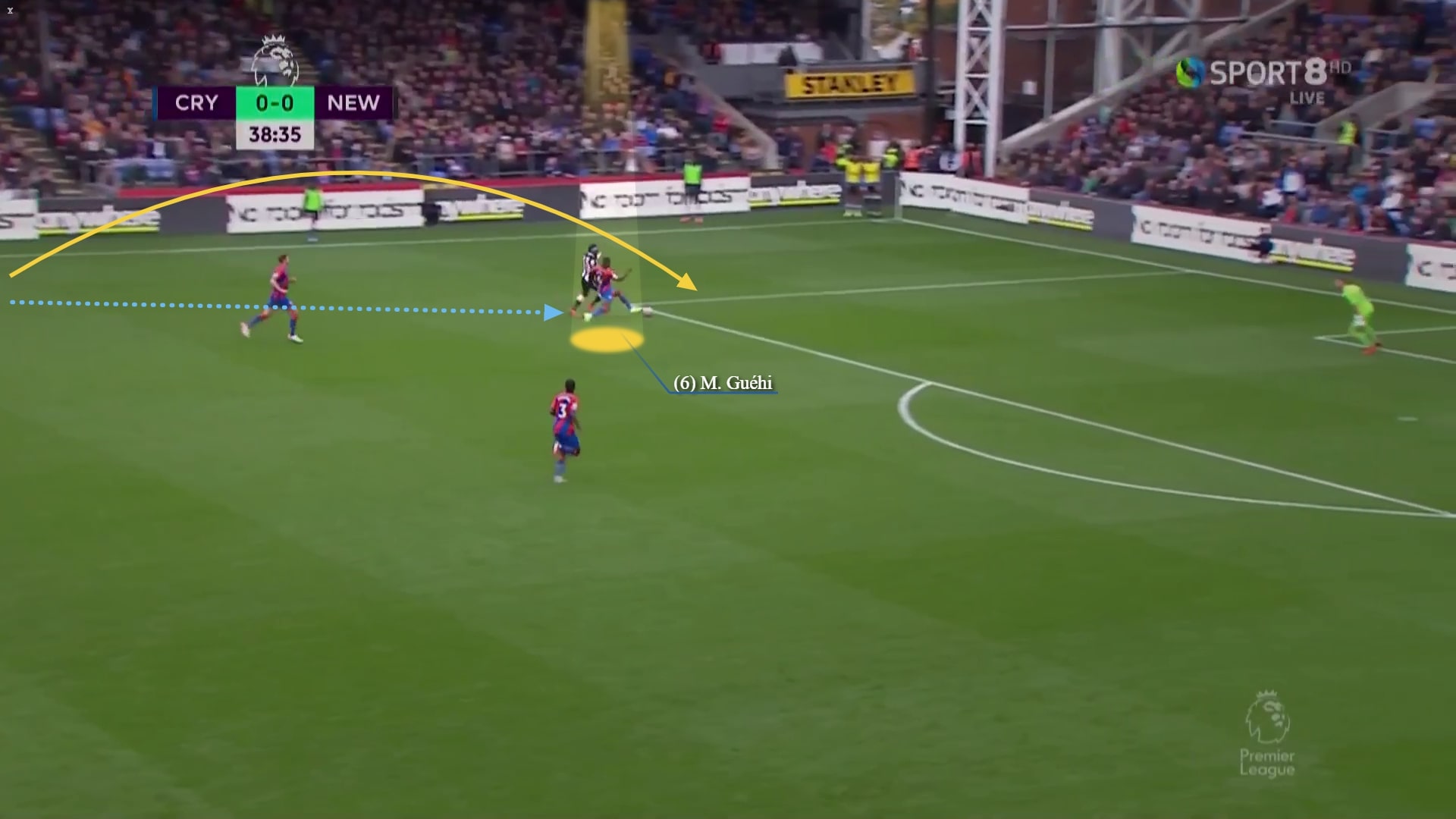 Regularly making adjustments to his stance from his crouched, side on base, this allows him to powerfully move vertically, laterally or diagonally to deal with the movement of his opponents. As a result, he quickly gets on his bike if an adversary drops deep or runs in behind.

It’s also worth pointing out how he typically likes to get touchtight so he can unsettle opponents, ensure they can’t turn freely and to not allow them any separation to cleanly execute their actions. In doing so, this impedes their ability to gather momentum and keeps the pressure on. Be it getting his arms across an opponent to stifle their run or following them aggressively when they drop deep with their back to goal, he does this effectively. 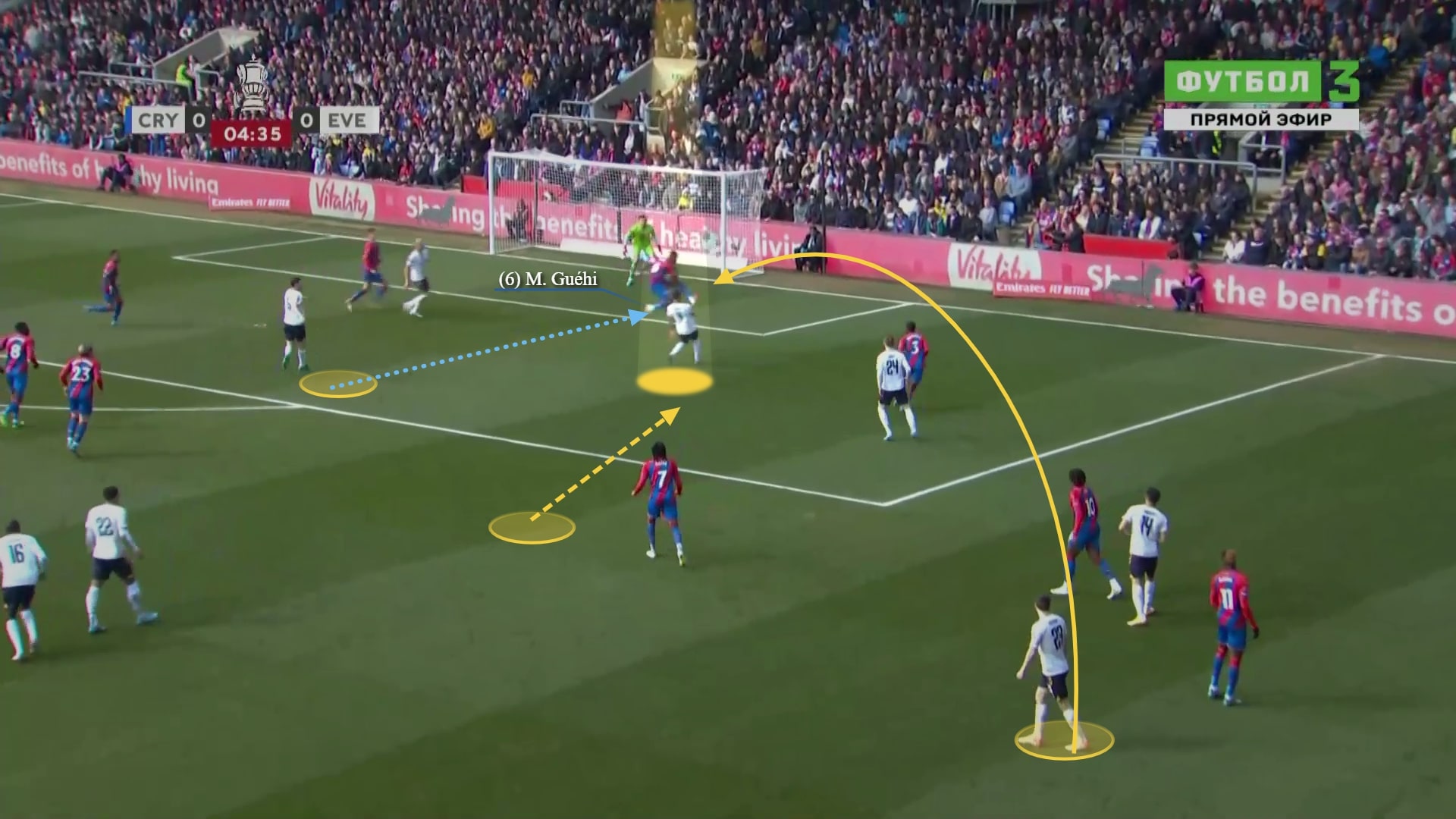 Strong, quick to react and speedy, Guehi unsurprisingly holds his own in individual battles both on the ground and in the air. Able to outmuscle his targets by jostling them off the ball and forcing them into errors, this supplements his proficiency in the air, where he picks up the ball sharply and times his leap well to come out on top consistently.

To focus on the latter, and his heading is an asset not only in terms of seeing him excel at defending and attacking set pieces, but also to clear the danger from crosses into the area and when helping his team win second balls from goal kicks. Although the man who stands 183 cm isn’t always perfect at winning his aerial battles due to his size and the quality of opponents he faces in the Premier League, the positives attached to his work here outweigh any negatives. His recent goal vs. Everton in the FA Cup illustrates this aptly. 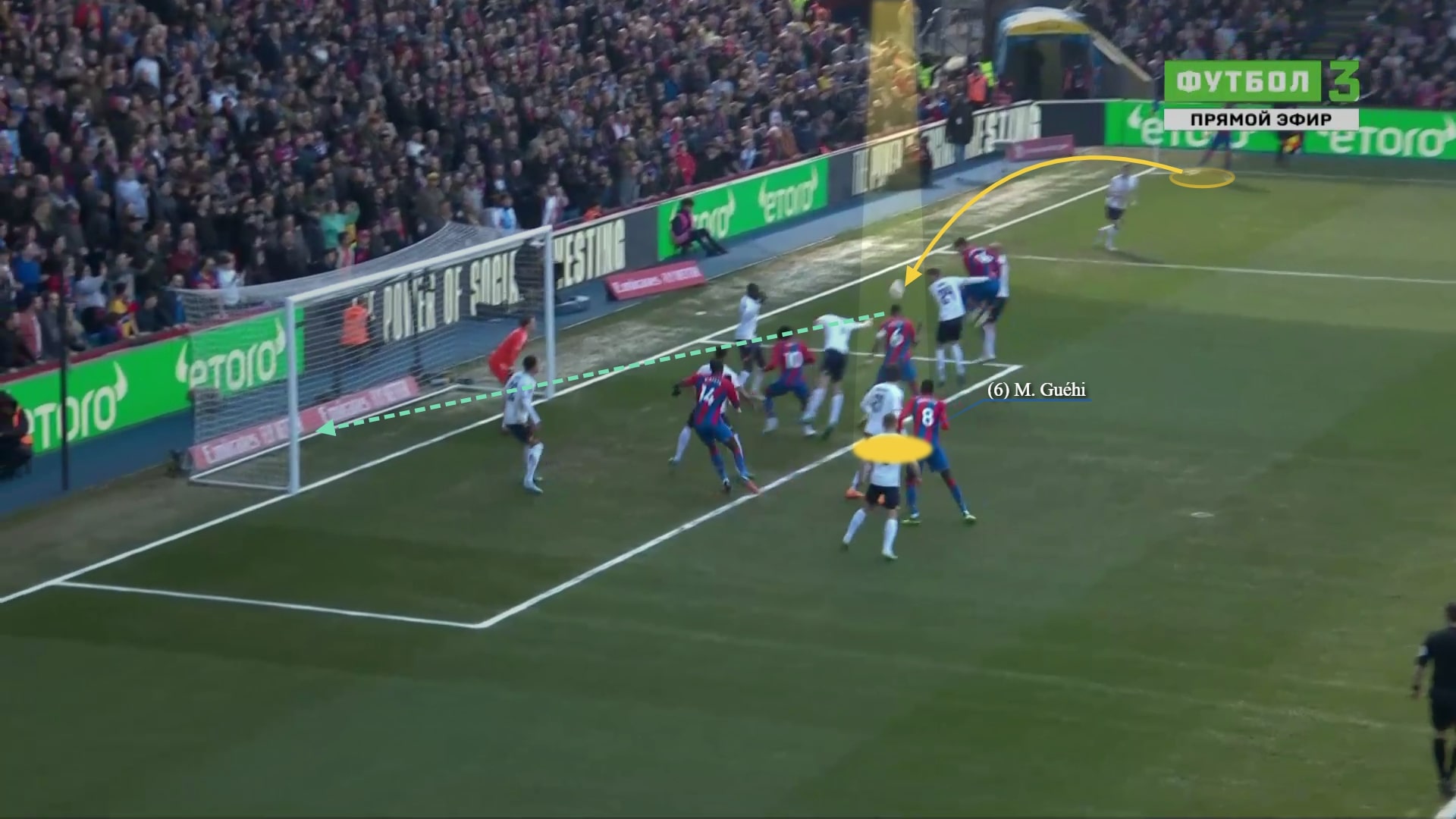 Not afraid to put his body on the line to block shots or assertively tuck into challenges, these are a couple of extra things that have further endeared himself to the Eagles fans.

Forming a formidable partnership with the more travelled and experienced Joachim Andersen, the duo have been integral towards Palace’s encouraging first season under Vieira. “It is going well, we’re getting used to each other’s games and understanding how we both want to play and what roles we have in that partnership,” Guehi explained.

“I am really enjoying it. Hopefully with many more games to come we can solidify that, get more clean sheets and hopefully more wins.”

Just as effective going forward, Guehi’s drawn plentiful praise for his expertise in driving forward with the ball at his feet. Once inheriting the ball cleanly with his tidy first touch and ball control, the 21-year-old relishes every opportunity to surge upfield, eager to gain territory, beat opponents or lure them out so a teammate can subsequently be found.

Handling being pressured well, it’s important how composed he remains and doesn’t panic under duress to still coherently use the ball. Backing himself to beat opponents with feints, sharp turns, alterations in pace and direction and using his strength to withstand pressure, the two-footed Guehi boasts an array of possibilities to outfox foes and unbalance their defensive structures. 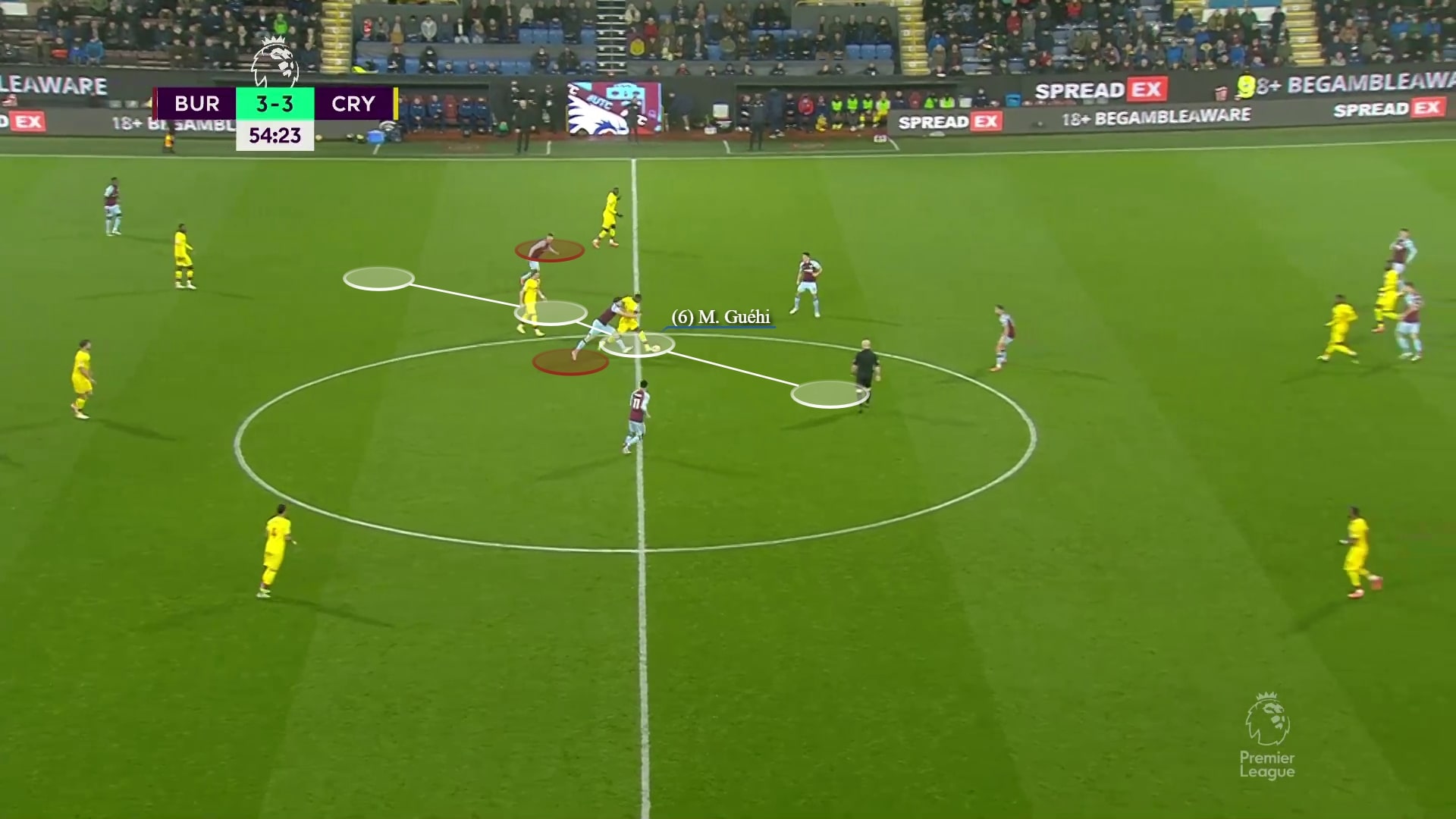 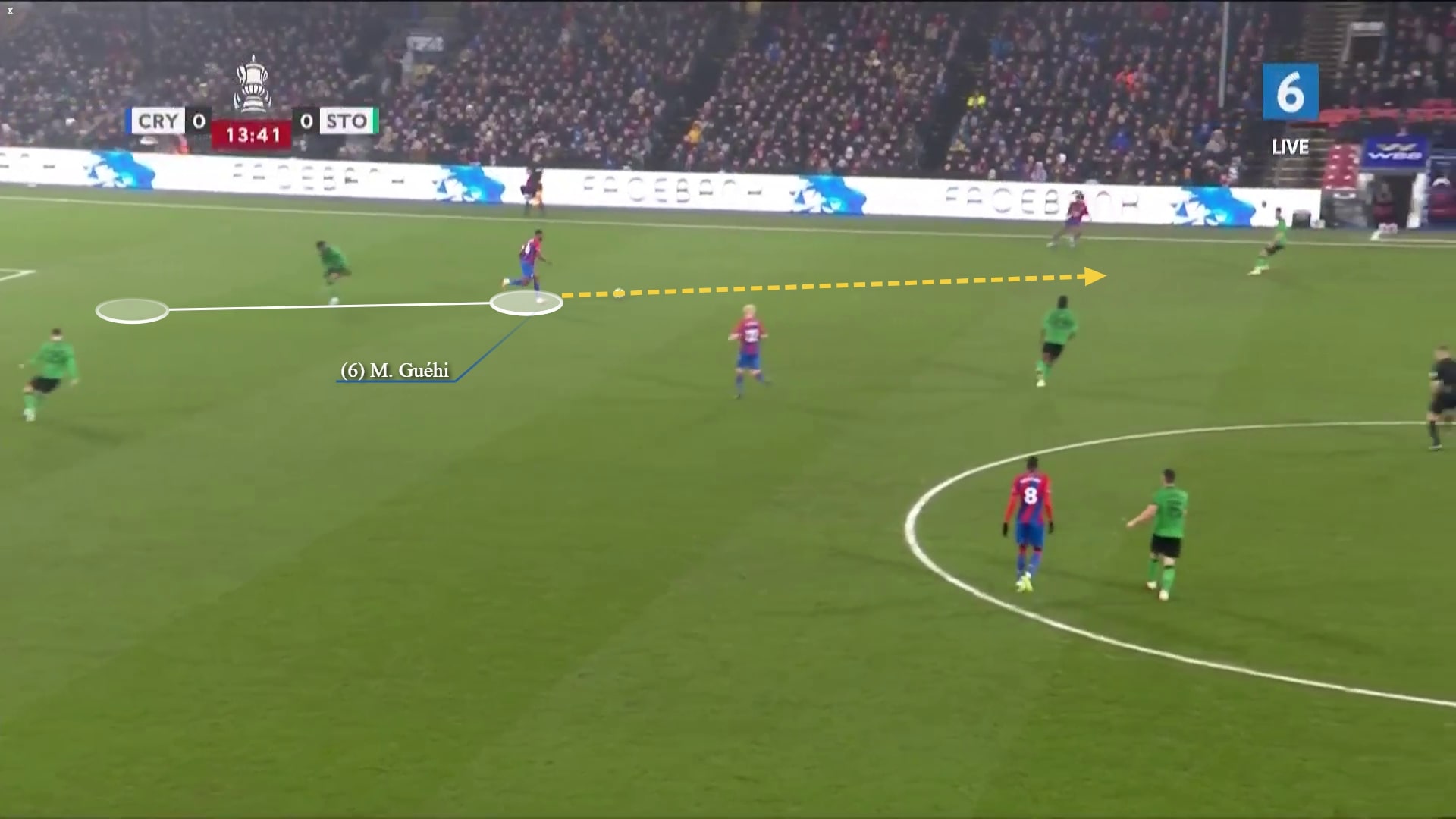 Commiting players and taking them out of the equation courtesy of his ball carrying, this, in combination with Andersen’s passing mastery, has certainly been crucial for Palace when attempting to beat the press.

Ranking in the top 20% among players in his position across Europe’s top five leagues for dribbles completed (0.36 p90) and top 30% for progressive carries (3.14 p90) demonstrates his aptitude in this regard. It also warrants mention how he gets fouled 0.86 times p90, thus accentuating his dribbling prowess.

Meanwhile, in terms of his passing, Guehi moves the ball smoothly and accurately on both feet; keen to not overcomplicate things for the most part. A neat and tidy passer who operates with an element of caution so to not recklessly turn the ball over, he recirculates possession and gets the ball into the feet of Palace’s more damaging offensive weapons well.

If the expansive option is viable, it’s important to note how he can play these passes too, with him able to break the lines to find the feet of attackers, launch through balls in behind or strike wicked switches of play. Indeed, his passing competency is highlighted by the stats that state he’s in the top 26% for passes attempted (61.04 p90), top 43% for accuracy (87%) and top 35% for progressive passes (2.96 p90). 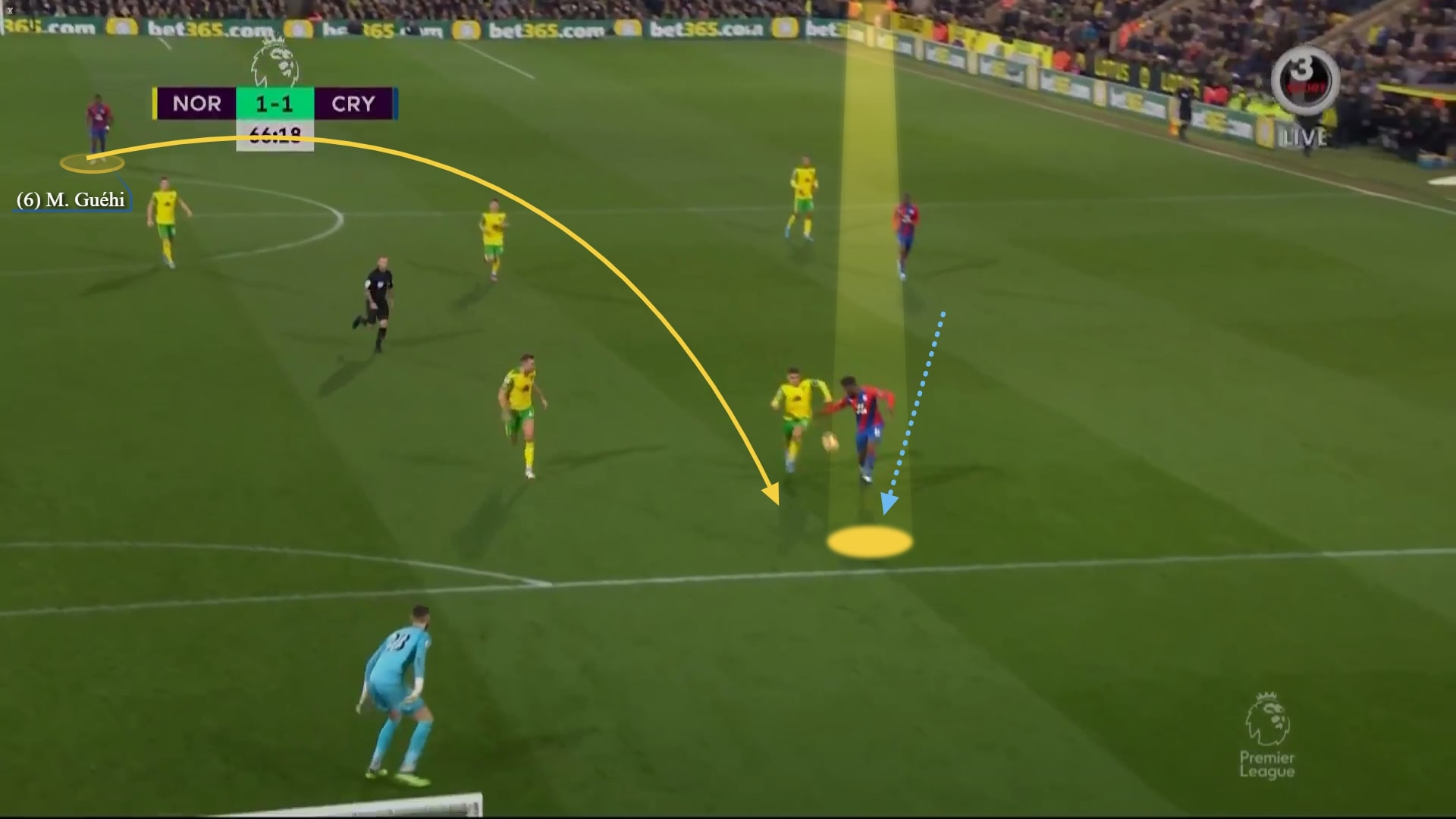 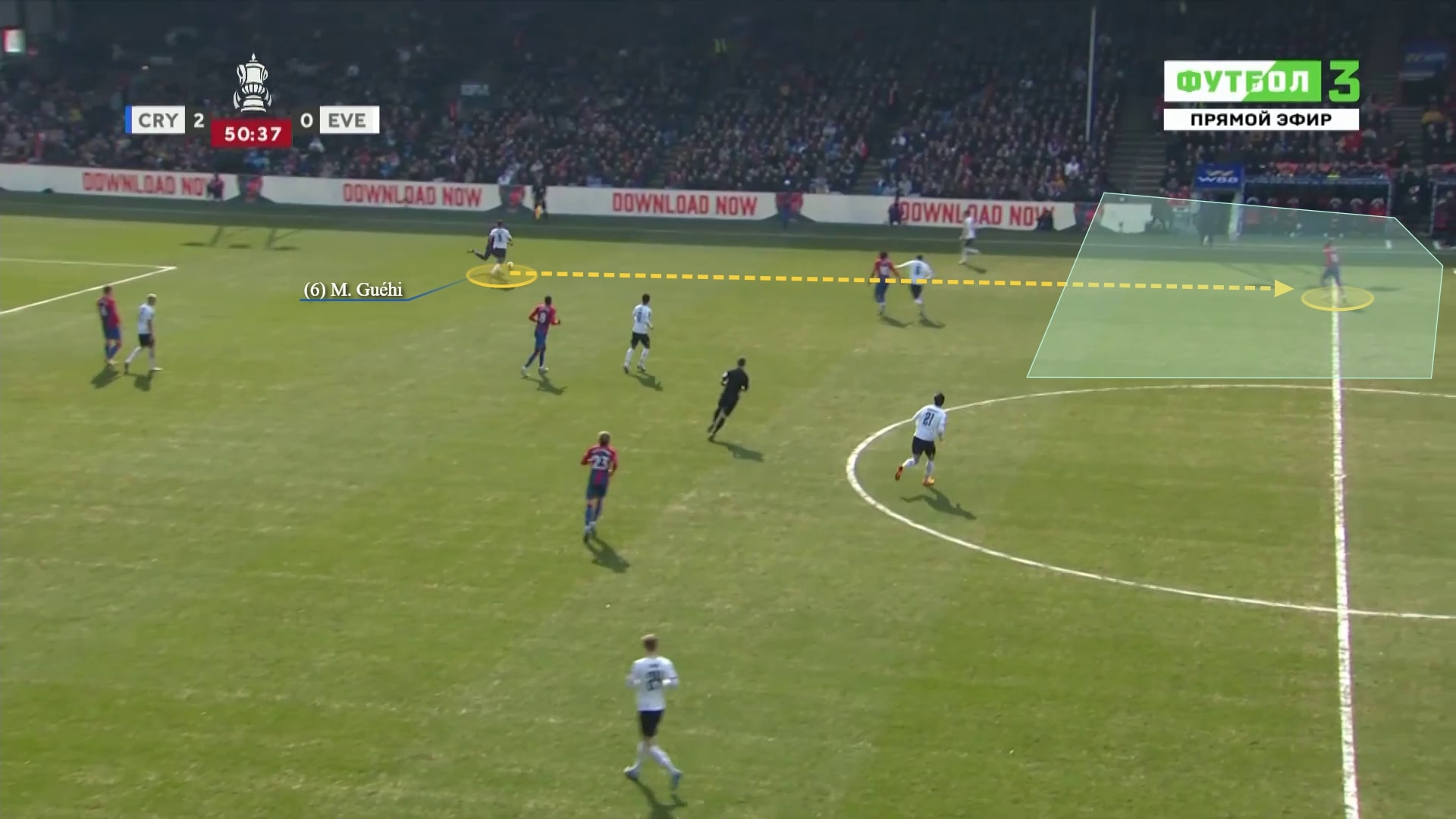 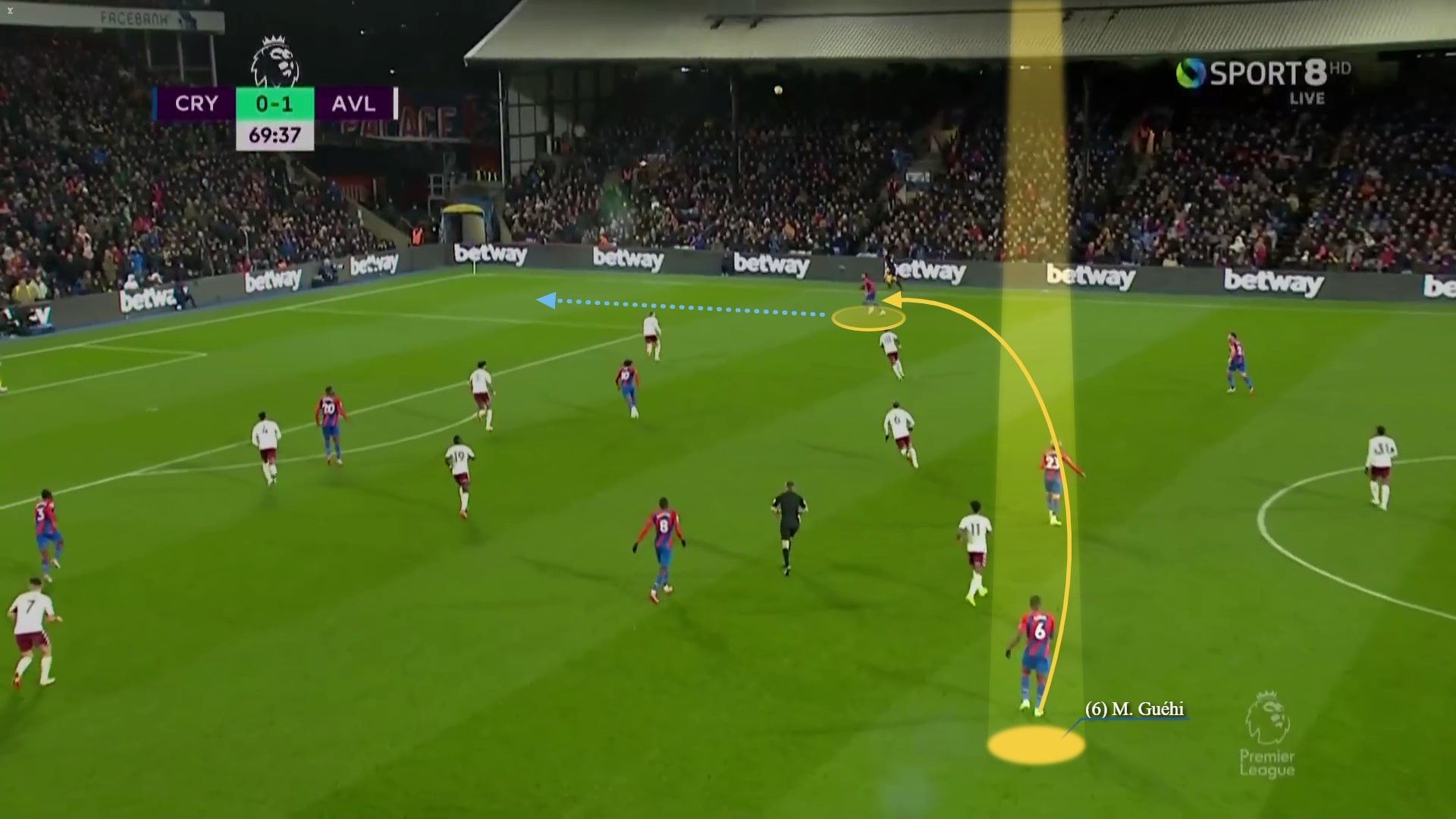 Understanding where he needs to be positioned in build up, Guehi accordingly helps form overloads, positional superiority and offers himself as an option to bypass the initial press. 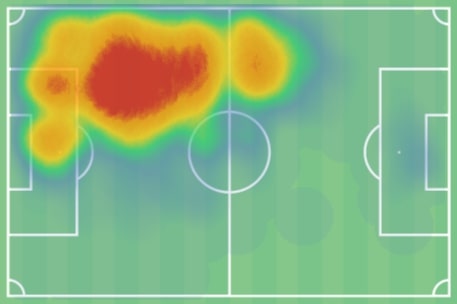 A real leader on the pitch as well, Palace’s commanding presence in the heart of their defence has unquestionably been one of the signings of the season. Going from strength to strength since making the tough call to leave Chelsea in the summer, there’s no doubting he made the right decision for his career.

“It was always a tough decision, leaving your boyhood club where you’ve played for so long. To leave was difficult, but for me, I thought it was the right decision to come to a club like Palace, where the direction they’re going in is to give players like myself the opportunity to live out their dream and express themselves,” he told Sky Sports.

“I’m really glad I’m here and as I said, I think it was the right decision. It was the appeal of playing Premier League football regularly that attracted me, the appeal of the manager and the fact that this club is a really stable club.

Fresh from debuting for England, the future of Guehi is certainly one that looks to be going in a distinctly upwards direction.

Right at home, obtaining regular minutes and learning every day under the tutelage of Vieira at Palace, the sky appears to be the limit for what he can achieve.