Superb Spinazzola propelling Italy to great heights at the Euros 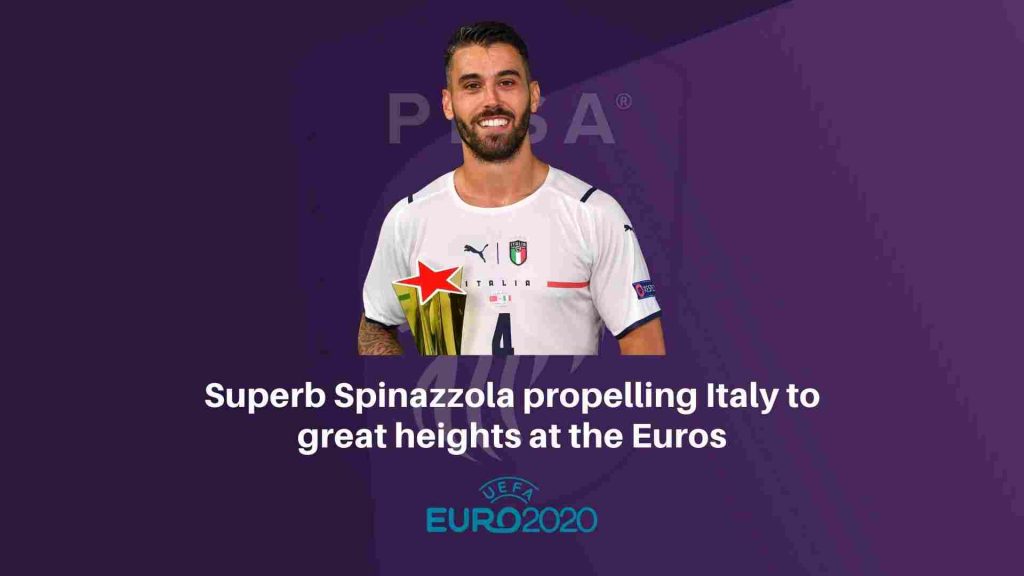 Coming off an excellent season with AS Roma in Serie A, Leonardo Spinazzola has eye-catchingly transferred his form into the Euros with Italy.

Having been one of the elite performers at the Euros so far with his relentless attacking energy and dynamism, the jet heeled fullback’s given Italy so much drive from his post on the left.

After starring against Turkey and Switzerland, before being rested for Italy’s last group match, Spinazzola crucially carried his high level in Italy’s Round of 16 victory over Austria with another man of the match display.

Oozing confidence and relishing every opportunity to join in attacks, his advanced positioning and clever movement was the catalyst for so many of the Azzurri’s most promising passages.

Providing essential width and depth to Italy’s offensive mechanics, his runs were a constant source of menace for Austria to handle. Timing his overlaps effectively, he offered a quality outlet throughout to stretch the pitch, as nearby winger Lorenzo Insigne, would draw his man infield to create some extra room for him. Whether receiving switches of play so he could be isolated against his opponent, embarking on hard to mark blindside runs into the box or luring out a foe to manufacture openings for Insigne, this aspect of his game was a highlight. 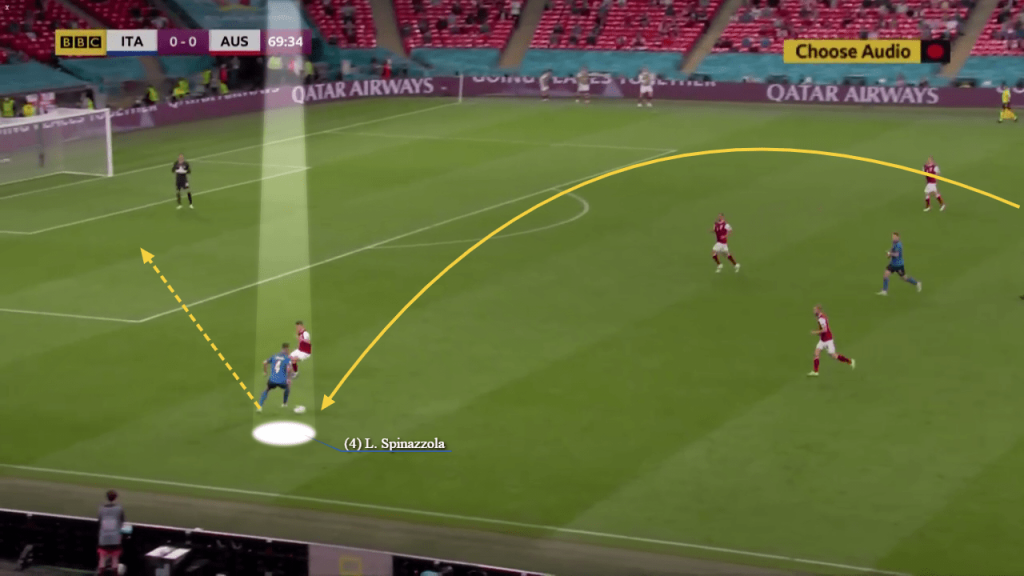 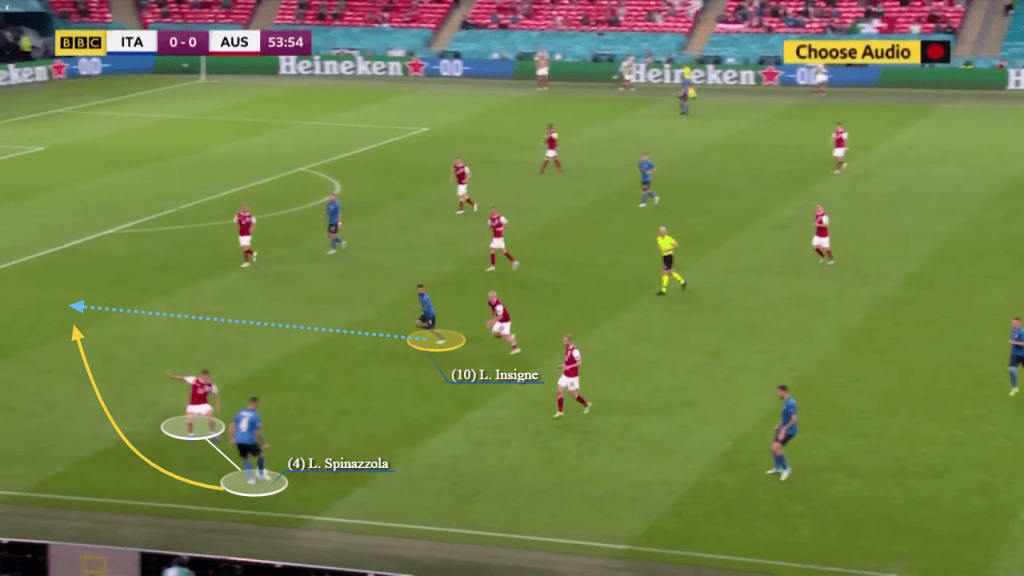 Further evidence of his super understanding with Insigne could be found when they rotated positions, which added some variety to Italy’s upfield journeys. As a result, the speedy Spinazzola often found spaces infield to take advantage of, where he could cut inside onto his right foot to either dribble or shoot from dangerous central areas. 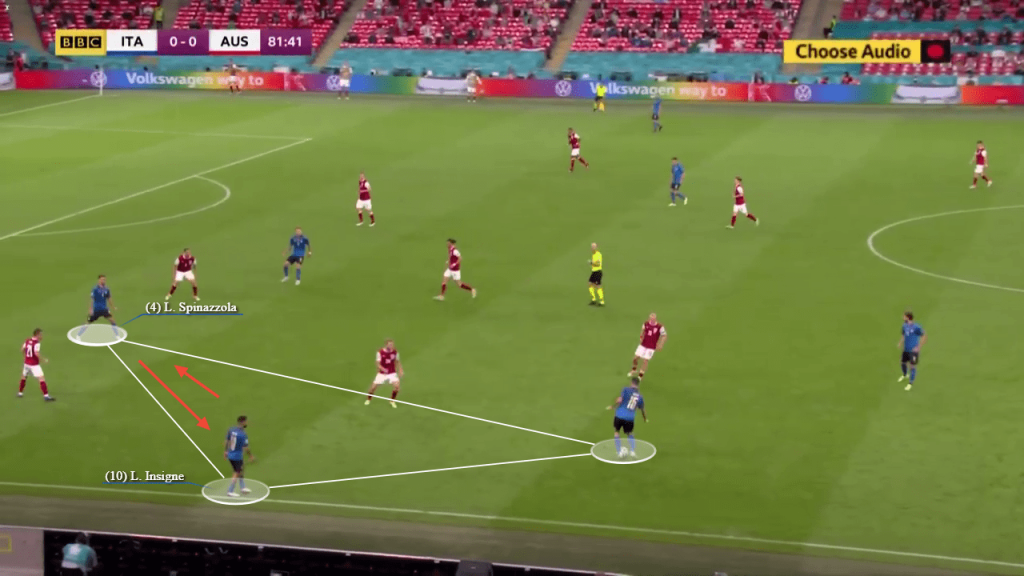 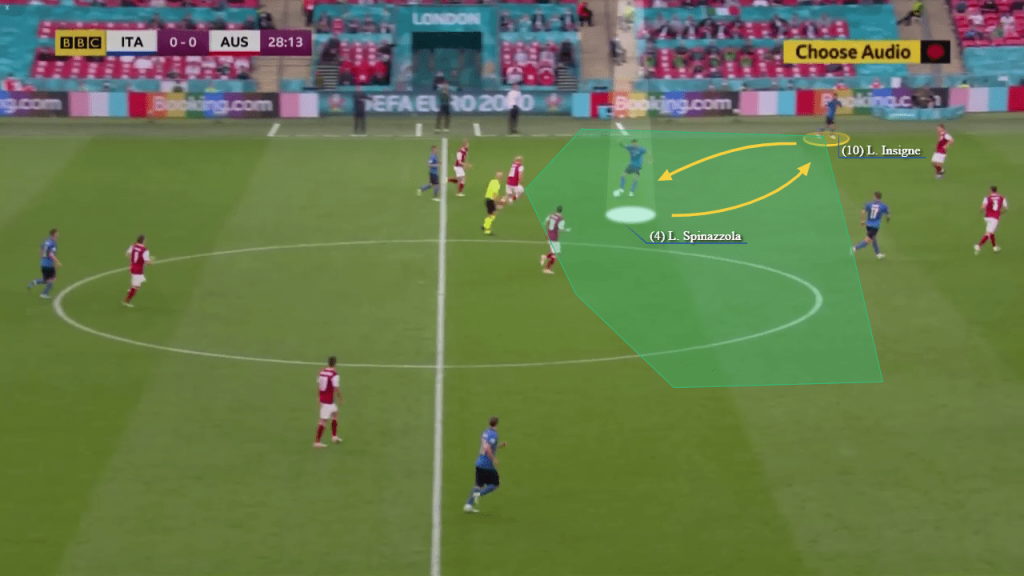 Disrupting the rhythm of their respective markers and placing doubt in the minds of defenders on who to mark, he frequently found space to threaten. Indeed, a testament to the success of the tactic arose in the lead up to Italy’s opener. Here, he expertly found room to receive between defenders and between the lines before taking a moment to assess his options. Upon spotting Federico Chiesa’s storming run into the box, he duly obliged it, as the winger then did magnificently to score from the angle. 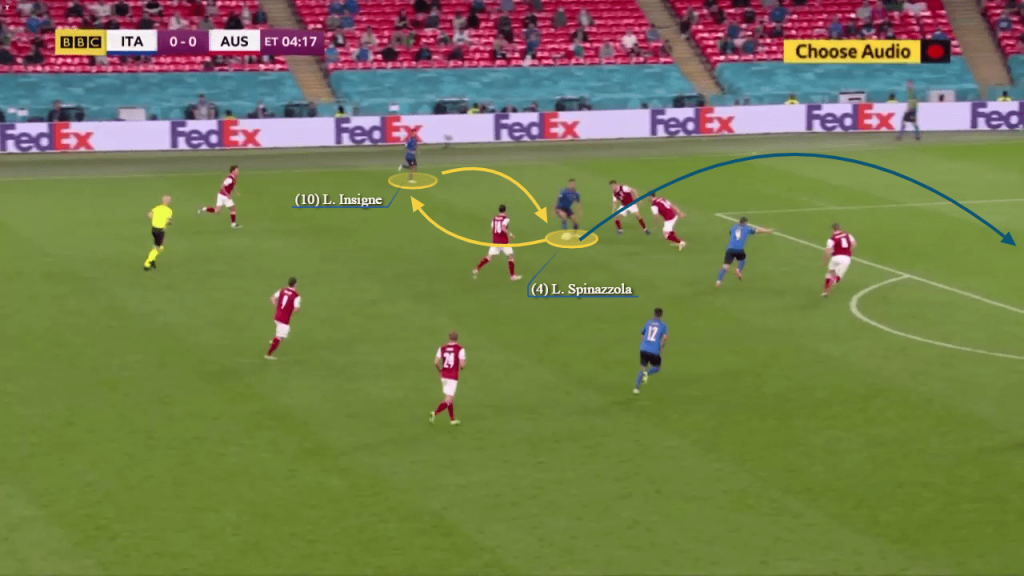 Picking his moments when to overlap or underlap, this, in combination, with how he’d help form overloads in wide areas to engage in smart passing triangles and diamonds, compounded issues for Austria. 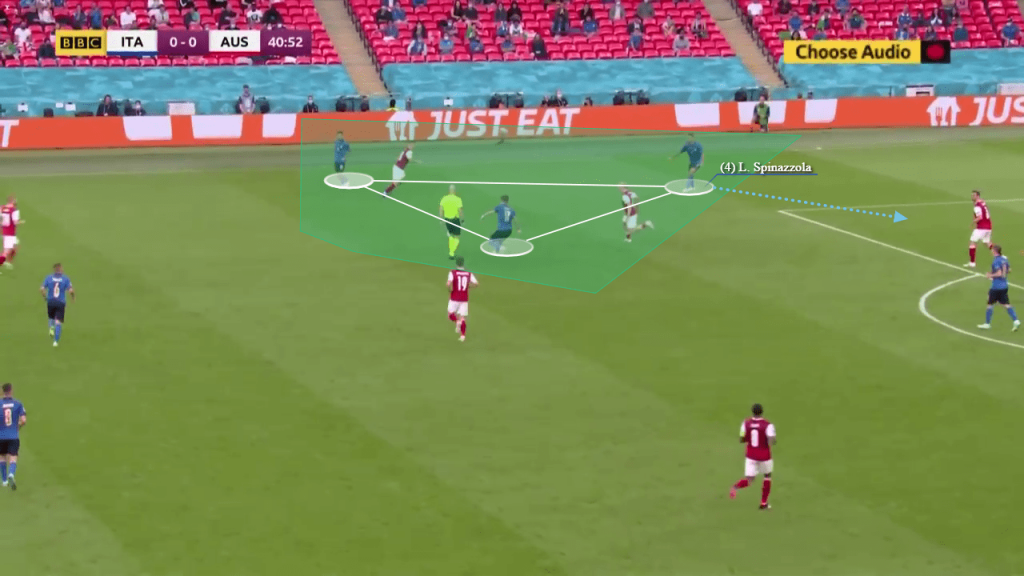 Two footed and loving every chance to dribble upfield with gusto, this part of his game was another huge positive. Using his classy catalogues of skills, including shoulder drops, stepovers, shimmies, faked passes, hesitation steps and razor sharp changes of pace and direction, opponents found him a nightmare to contain. 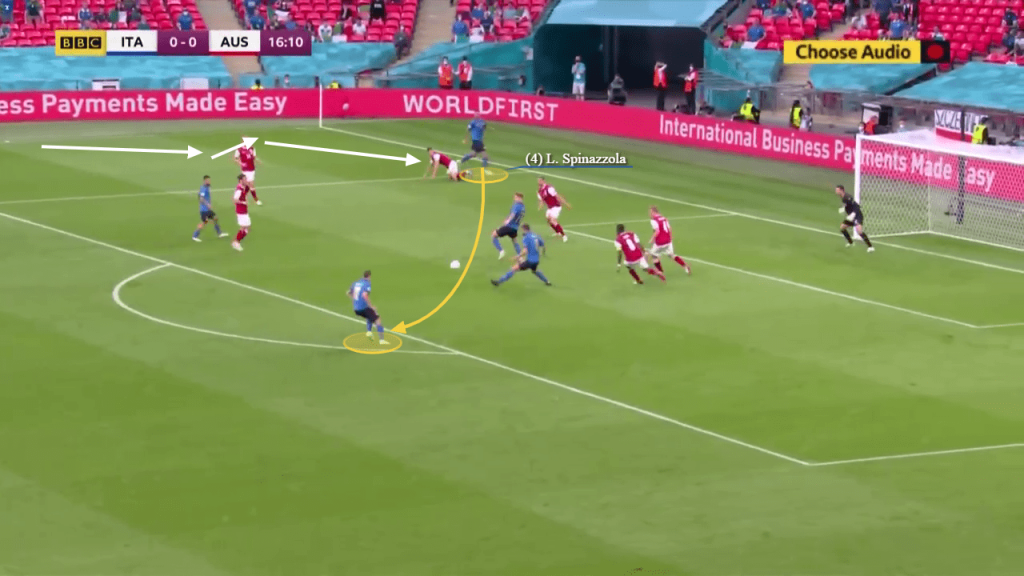 The fact he’s competent using both feet meant he could  beat markers around the outside or on the inside, which certainly added to his worth. So comfortable on the ball and always looking to make things happen, not only did he unbalance and beat opponents, but he also provoked multiple opponents to free up teammates and draw fouls in advanced areas.

Producing a plethora of danger, his ball carrying ensured he could motor into the final third before either cutting in to shoot or firing a cross or cutback towards his colleagues in the area.

Shifting the focus to his passing, and his output here was crucial towards both of the Azzurri’s goals. Aside from pinpointing Chiesa as mentioned earlier, his wicked switch of play prior to the second out to Insigne, who was double teaming Stefan Lainer with Manuel Locatelli, served as the catalyst for Matteo Pessina’s sealer. 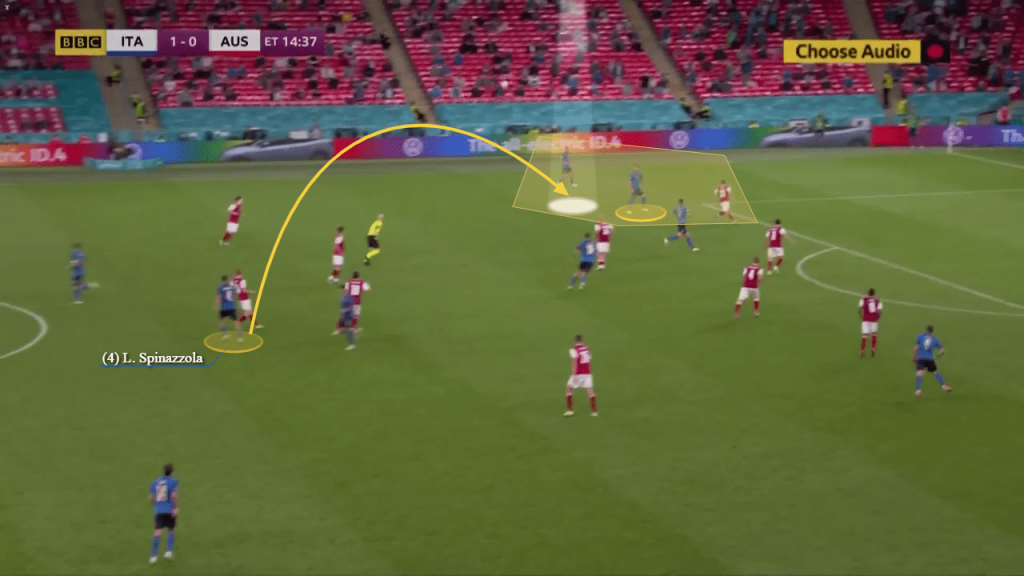 A constant source of attacking impetus, Roberto Mancini’s men’s triumph owed much to Spinazzola, for he gave them vital unpredictability, thrust and energy. 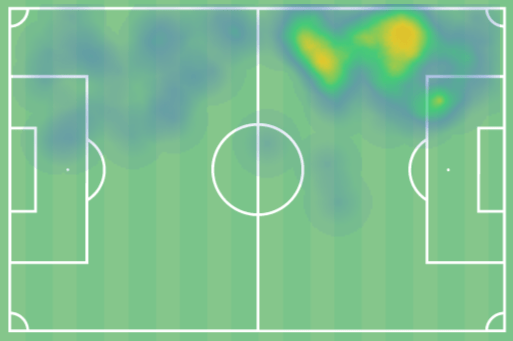 By the numbers, his nine successful dribbles, five progressive runs, three touches inside the box, three key passes, three shots, four accurate long passes at %100 and two accurate crosses demonstrated what a terrific game he had.

On a night where Italy extended their remarkable unbeaten streak to 31 matches and booked their passage into the quarter-finals of the Euros, Spinazzola yet again underlined his importance to the team.

One of the stars of the tournament so far, he’ll be eager to do it all again in the quarters vs. Belgium and show the world what a force he is to be reckoned with.