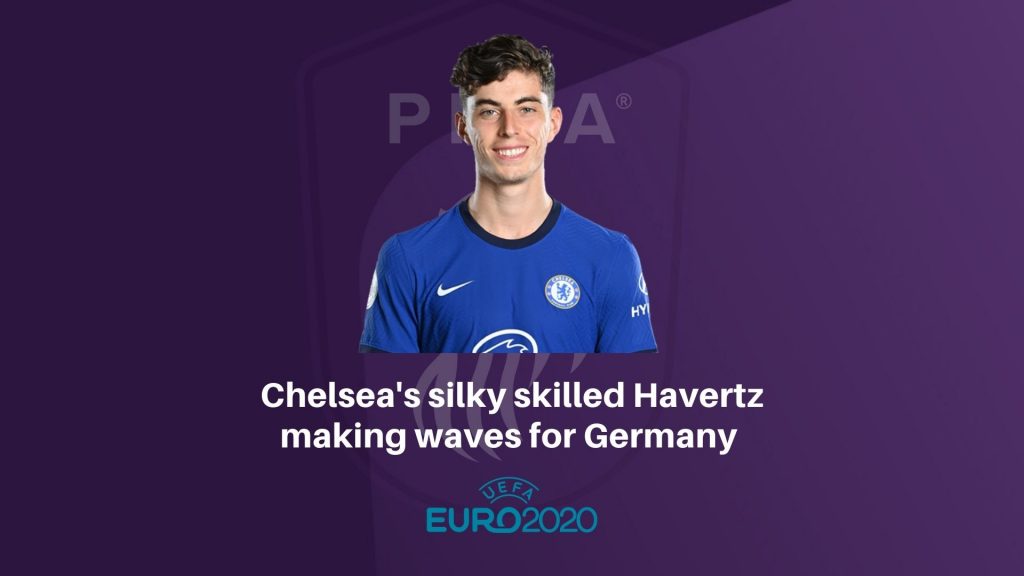 Kai Havertz has certainly been a shining light for Germany at the Euros, giving them a much needed spark in the final third throughout the group stages.

Scoring two goals and supplying two assists in their opening three matches, Havertz’s production has been vital in ensuring Germany progressed into the Round of 16, where they’ll play England.

Rising to the occasion in Die Mannschaft’s exciting 2-2 draw with Hungary, Havertz backed up his sensational showing against Portugal with another quality outing.

Initially beginning on the right side of Germany’s attack in their 3-4-3 shape, the Chelsea whizz merely used this as a platform to start the game, for he rotated positions constantly with his colleagues. Forever altering defenders’ points and disrupting their rhythm so they couldn’t settle into a pattern of how best to combat him, he was a difficult man to keep tabs on.

Looking to unsettle the deep sitting Hungary rearguard with these mechanics, Havertz, Serge Gnabry and Leroy Sane’s frequent interchanges were executed very nicely indeed. For Havertz, this helped him find spaces between the lines and open gaps in behind by dragging foes out of shape, with his opponents often caught in two minds whether to keep their shape or step out and follow him deep. 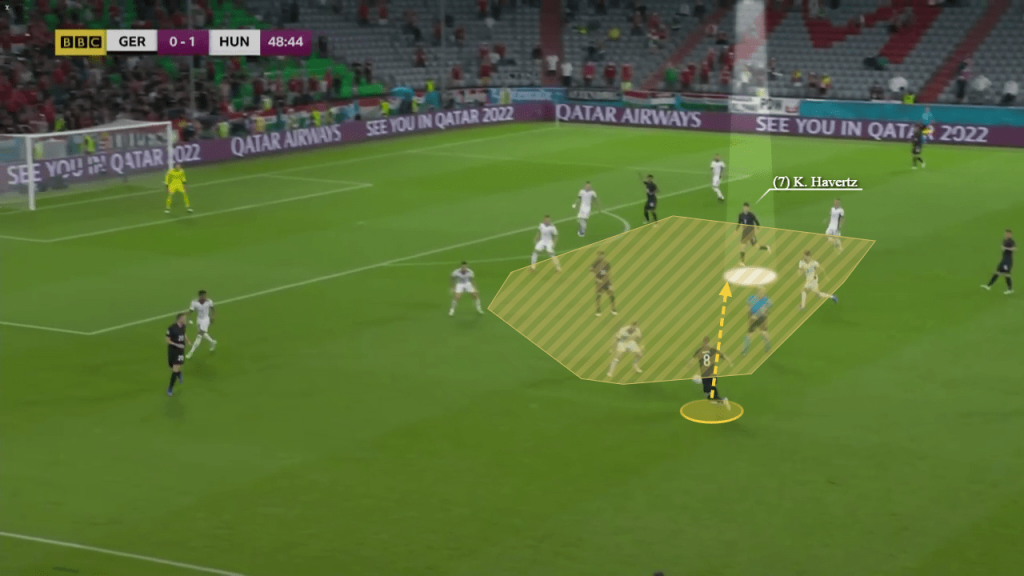 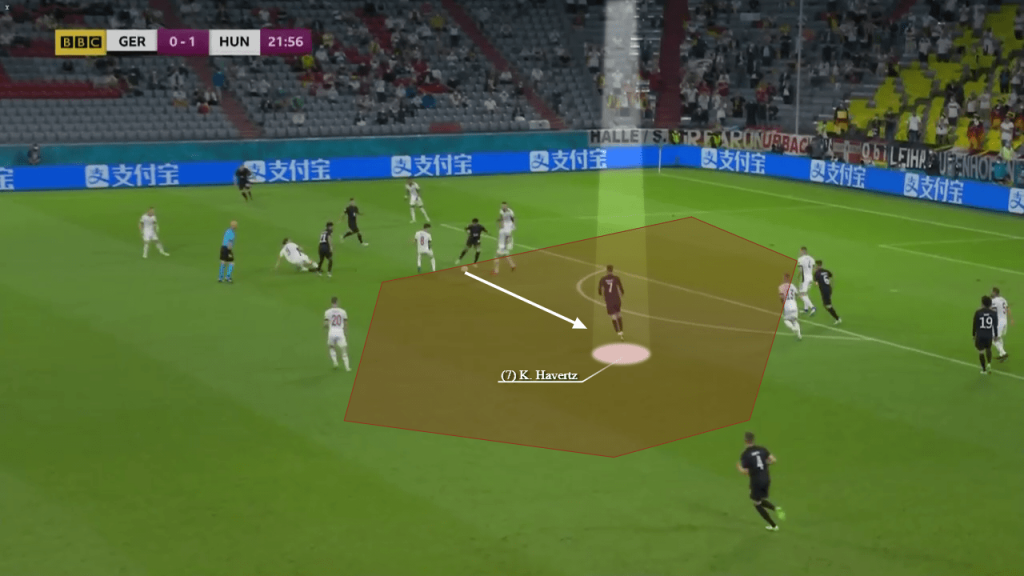 Popping up all over the final third hoping to form overloads and supporting triangles and diamonds, he admirably supported offensive passages with his connecting movement. Be it centrally, in the half-spaces and out wide, Havertz influenced proceedings all over, as he expertly found space and generated openings for teammates with his intelligent movement. 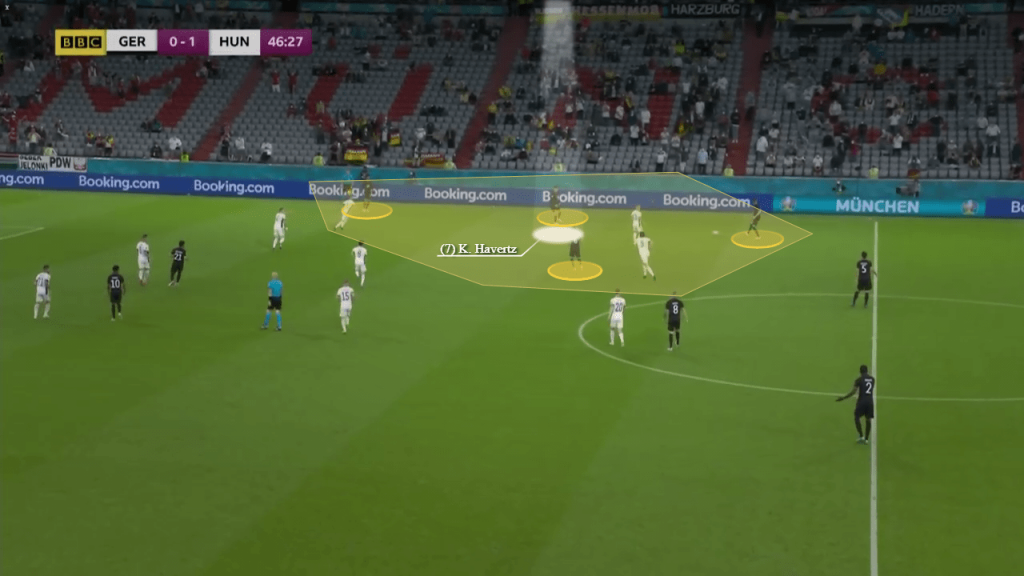 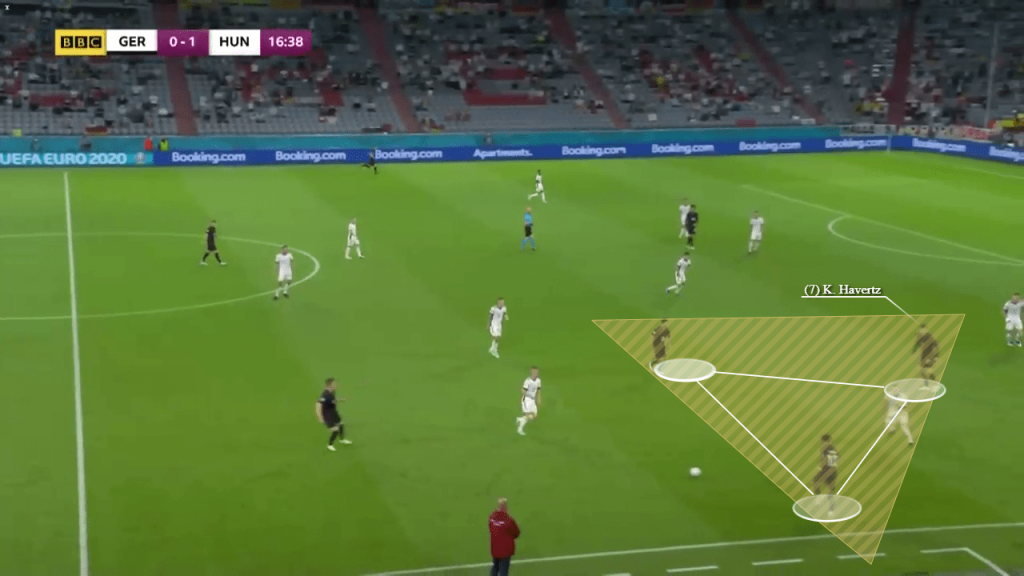 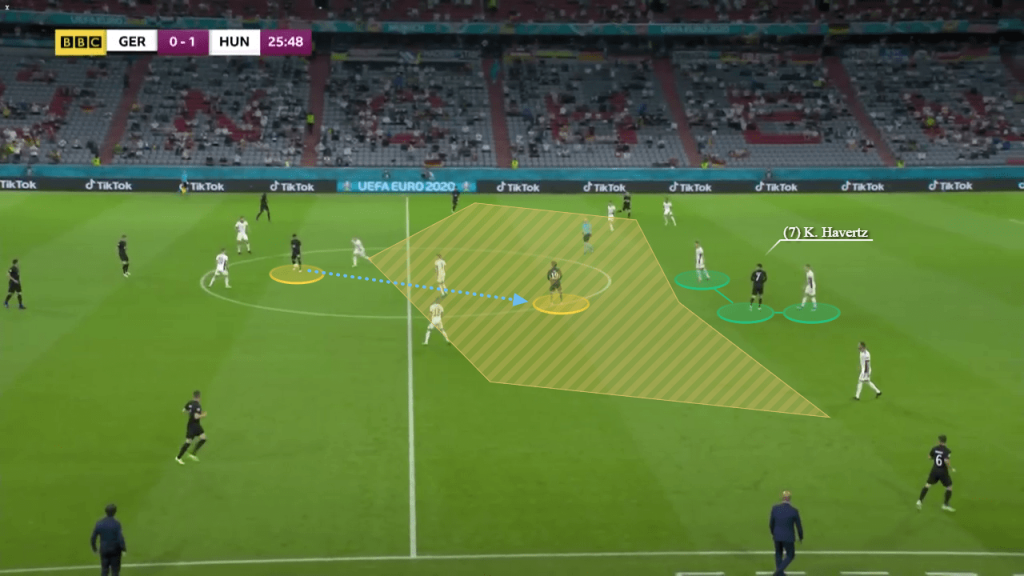 His comrades would repay the favour too by creating space for him to exploit, as he remained awake for pockets to take advantage of in front of and in behind the defence.

His depth runs offered a quality threat too, bringing some verticality to his team’s play to stretch out the Hungary backline. Timing and curling his runs to remain onside, expose the blindside of foes and exploit the gaps between defenders, there were many examples of his aptitude in this regard. 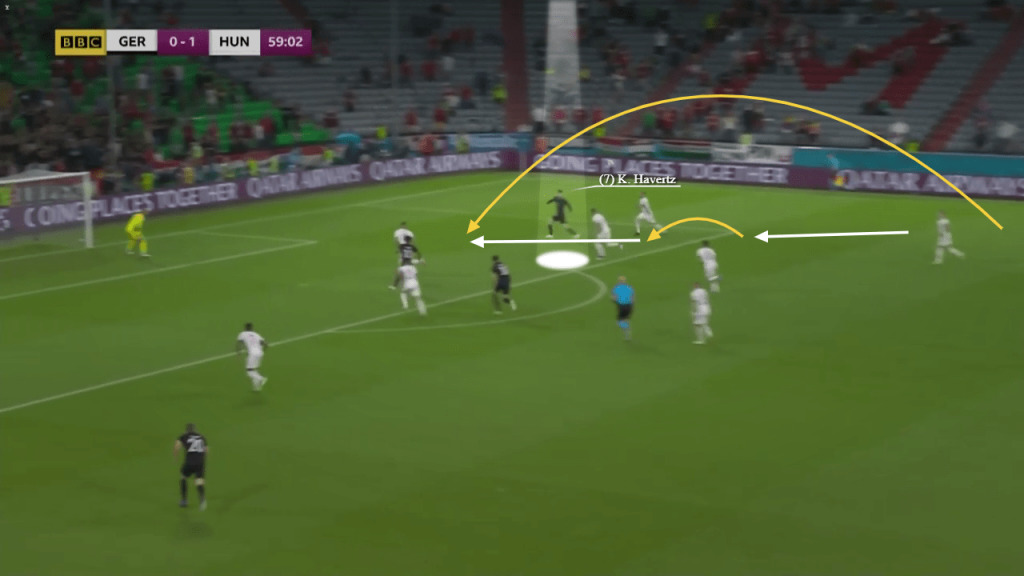 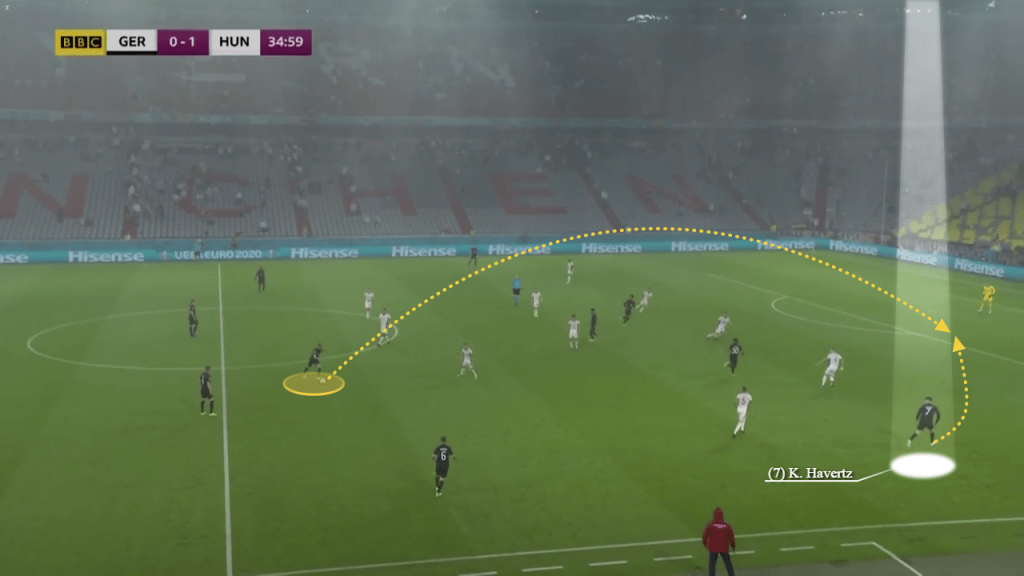 Havertz’s interactions with his wingbacks deserves mention as well, with him pulling wide smartly to receive while Joshua Kimmich or Robin Gosens would drift infield. The benefits of this were evidenced by allowing him to receive in greater time and space to execute his actions, embark on crafty runs in behind using a dynamic advantage and by letting him be isolated in 1v1s to use his skills. 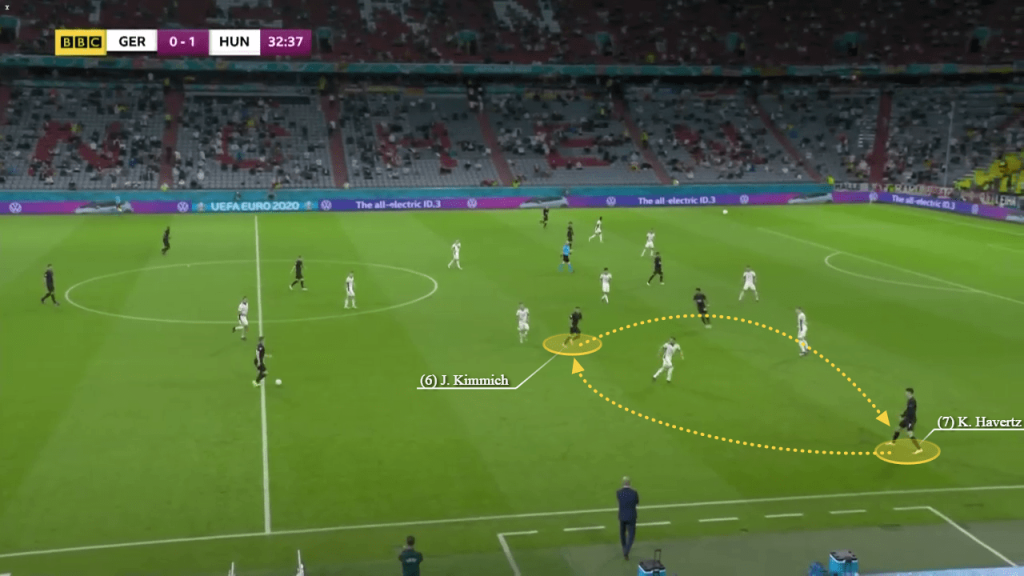 Other points of note came from how he’d generate 2v1s with his nearby wingback to double up on the Hungary wingback and how his movement facilitated third man combinations to break through the dogged Magyars.

Havertz’s nuisance was amplified by his ball handling and ingenuitive passing. So good in tight spaces due to his razor sharp first touch and ball control, the way he maneuvered away from opponents was a joy to watch. Using his catalogue of tidy feints, shimmies, shoulder drops and subtle changes of pace, he was able to evade incoming harriers efficiently.

This aspect of his armoury served him well when holding up the play too, with his control, balance and awkward frame meaning he was a tricky man to dispossess. Getting his receiving angles spot on to shield the ball away from foes enhanced his value, as his scanning gave him a good foundation to be aware of nearby defenders.

Being alert to where opponents, vacant spaces and teammates were helped in his distribution too, giving him an updated mental imagery of his surroundings in order to make considered decisions. Boasting wonderful vision and a super ability to read the play, these were additional keys to him being able to find his targets.

Whether recycling possession, engaging in neat link play using all parts of his foot, spreading the play or striking some dangerous through balls in behind, Havertz’s aptitude here was important. 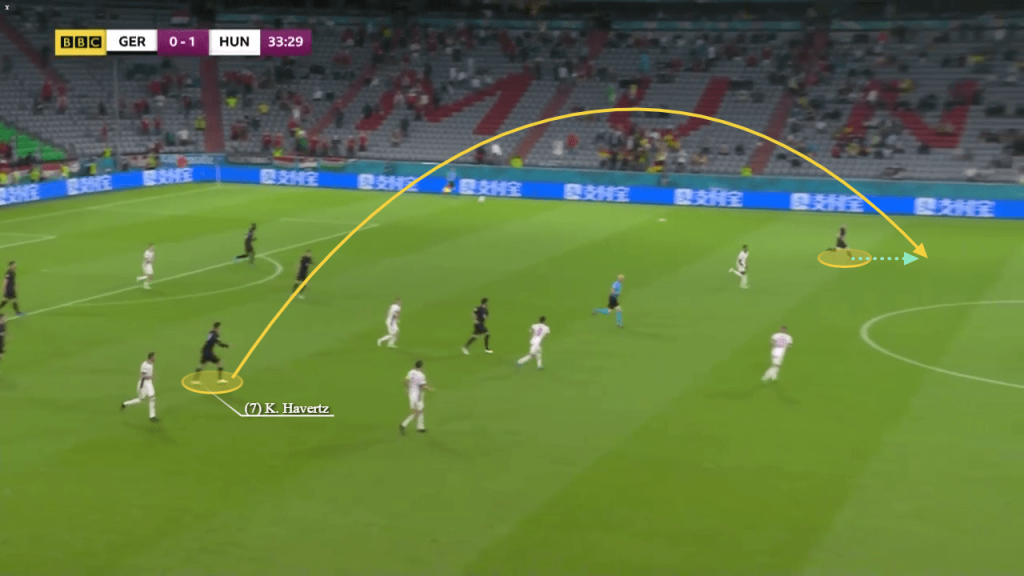 Rewarding himself with a goal was the perfect way to cap off his strong body of work.

By the numbers, his five dribbles, five touches inside the box, four shots, two accurate crosses and 23 completed passes at 85% success aptly depicted his solid output.

Silky skilled and elegant, the gifted 22-year-old emphatically proved what an integral asset for Joachim Low’s team he is with another display full of upside.

Up next for Germany will be a colossal clash against England at Wembley, where the in-form Havertz will be relishing the opportunity to continue his purple patch on the big stage.