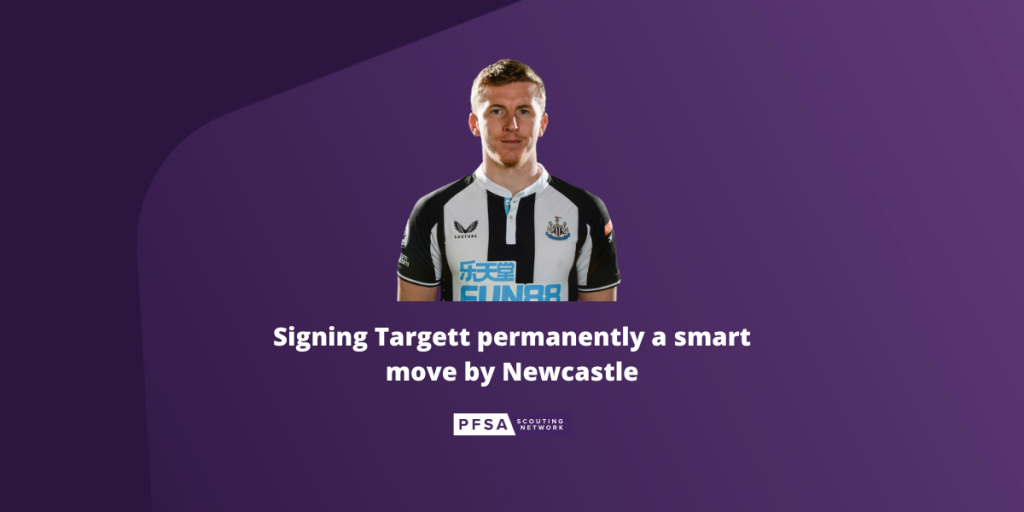 Despite exploring other options, Newcastle United ultimately opted to secure the services of Matt Targett on a permanent basis following his successful loan with the Magpies in the second half of last season.

Having played every minute he was eligible for since debuting for Newcastle in January, Targett’s form at left-back was integral towards helping Eddie Howe’s men keep five clean sheets and win 10 of the 16 matches he featured in.

Although rumours were rife suggesting Newcastle would bring in Atletico Madrid hotshot Renan Lodi, a deal that would’ve been hugely expensive, settling on the reliable Targett is a shrewd option. Only costing £15 million, apparently half of what Lodi would have cost, to acquire him permanently from Aston Villa, which includes the £3 million loan fee paid in January, the move is certainly a sensible one.

“Matt had a fantastic impact after joining on loan in January and made a big contribution to some excellent team performances,” Howe explained.

“He is a great lad and a top professional who undoubtedly makes us stronger so I’m delighted he sees his future here.”

An overjoyed Targett then stated his happiness about the move, insisting: “I’m absolutely delighted to sign a four-year contract with this club For me, it was an easy decision to make the loan permanent after the welcome I had from my fellow players, the staff, the supporters and the owners so I’m really happy to be here.”

“For me, I hope I could be a part of this club playing in Europe. I think we could try and get into Europe in the next few seasons. I think that that’s a massive achievement.”

Providing a solid attacking threat down the left, his considered passing over a range of distances, solid ball carrying and neat movement sees him contribute admirably.

To start with his passing, and his ability to support build up by circulating the ball quickly, fire zippy balls into the feet of his teammates and oblige runners in behind and down the channels are real positives. 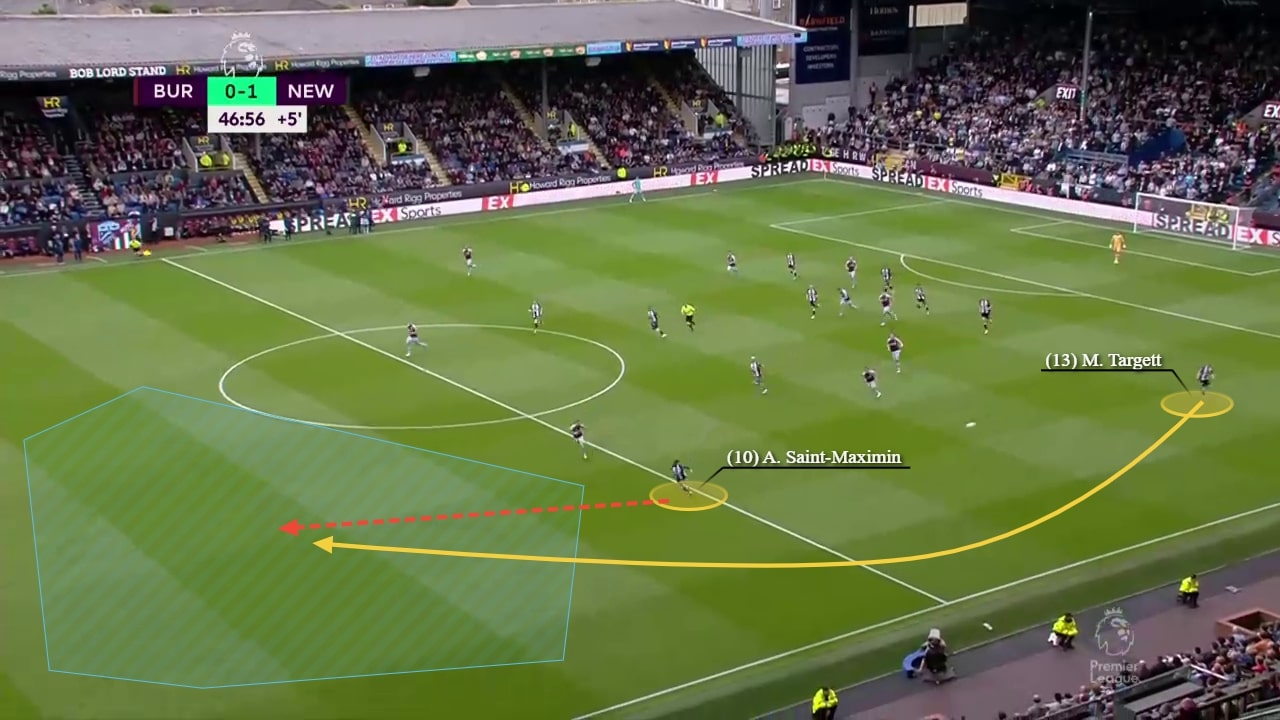 How shredly he notices teammates in good positions and makes typically sound decisions ensures he’s a good crosser and firer of cutbacks into the box. Boasting a handy left foot, his distinctive technique that allows him to wrap his foot around, plus under the ball, and impart plenty of whip and curve sees him beat the first man and regularly hit his targets.

Assessing his options coherently prior to delivering, this means he knows if he needs to aim for the front or back post, the middle, pull a cross back to the edge of the box or blast in a fast cutback centrally. In addition, his aptitude in this regard sees him serve as a quality option for set pieces, with his accuracy and precision making him a prime candidate in such scenarios. 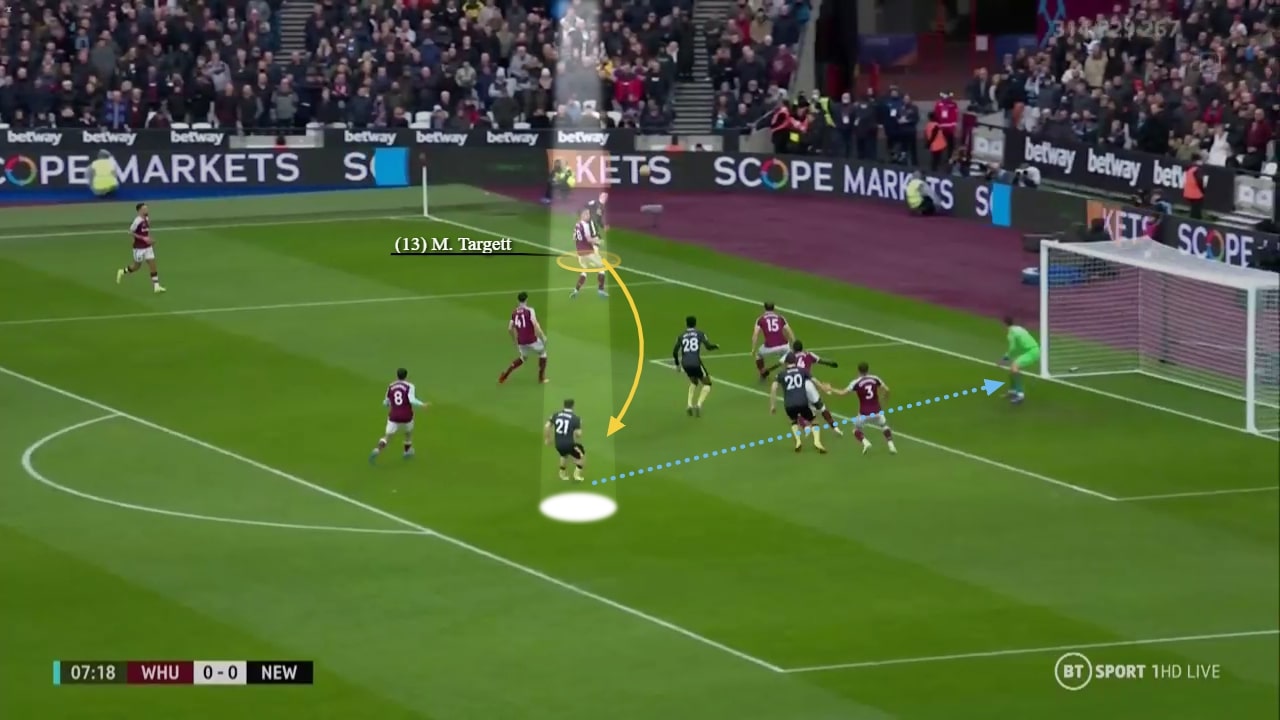 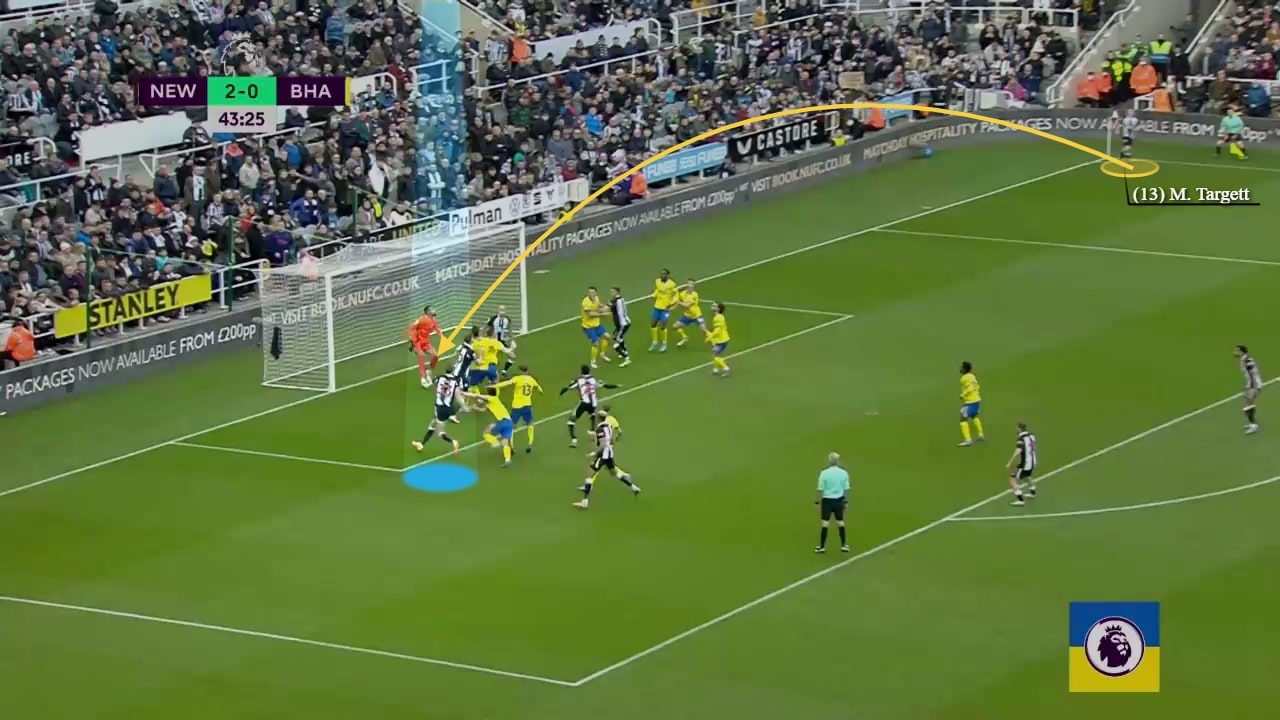 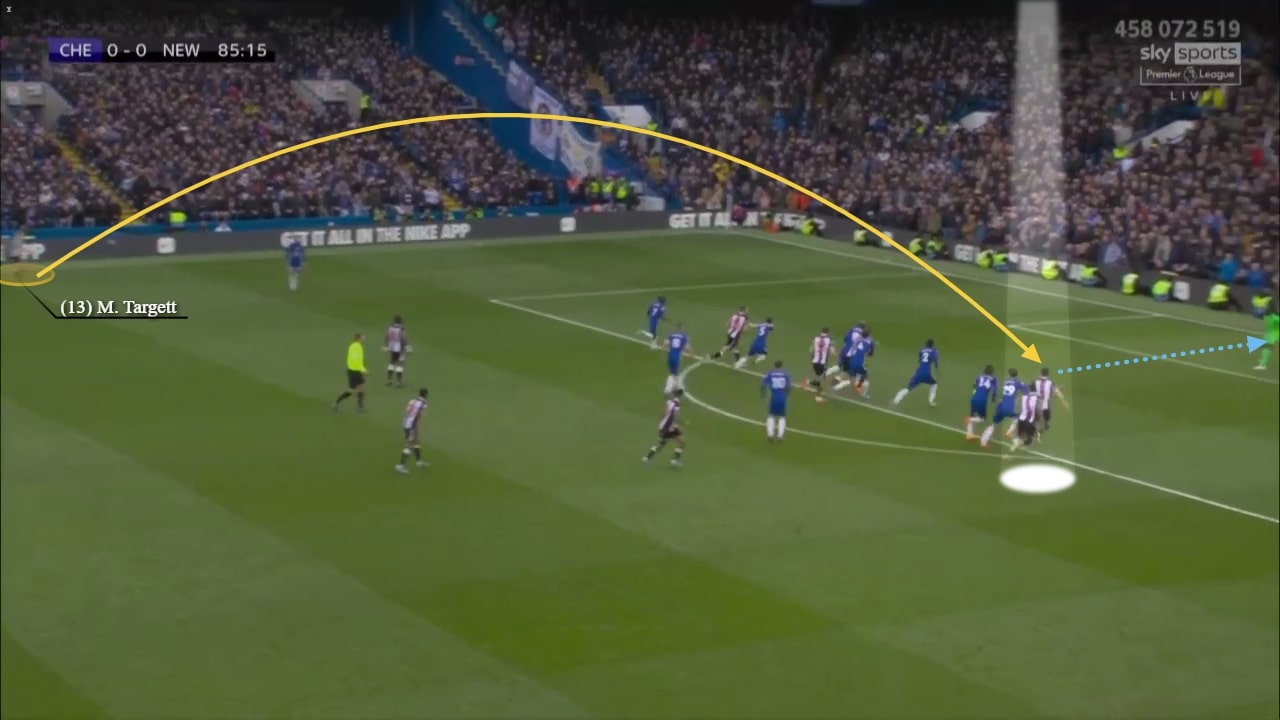 Calm and collected under pressure and displaying excellent judgement most of the time, the fact he ranks in the top 21% for progressive passes (4.58 per 90), top 29% for expected assists (0.12 p90) and the top 38% for shot creating actions (1.91 p90) among players in his position across Europe’s top five leagues illustrates his distribution quality.

His movement to get him into ideal positions to pinpoint teammates deserves mention too, for he wisely picks his moments when to join in attacks. Not always one to maraud upfield relentlessly due to him often staying deeper to provide structural security in case of a turnover, he instead waits for the right conditions to overlap to be an option on the outside once his team is set up to manage a transition.

Dovetailing smartly with wing maestro Allan Saint-Maximin, the way they interchange positions tidily allows Targett to embark on dangerous underlaps to attacks spaces in behind while allowing the dangerous Frenchman to be in 1v1s out wide, where he can wreak havoc on the dribble. The images below offer some fine examples of the above mechanics. 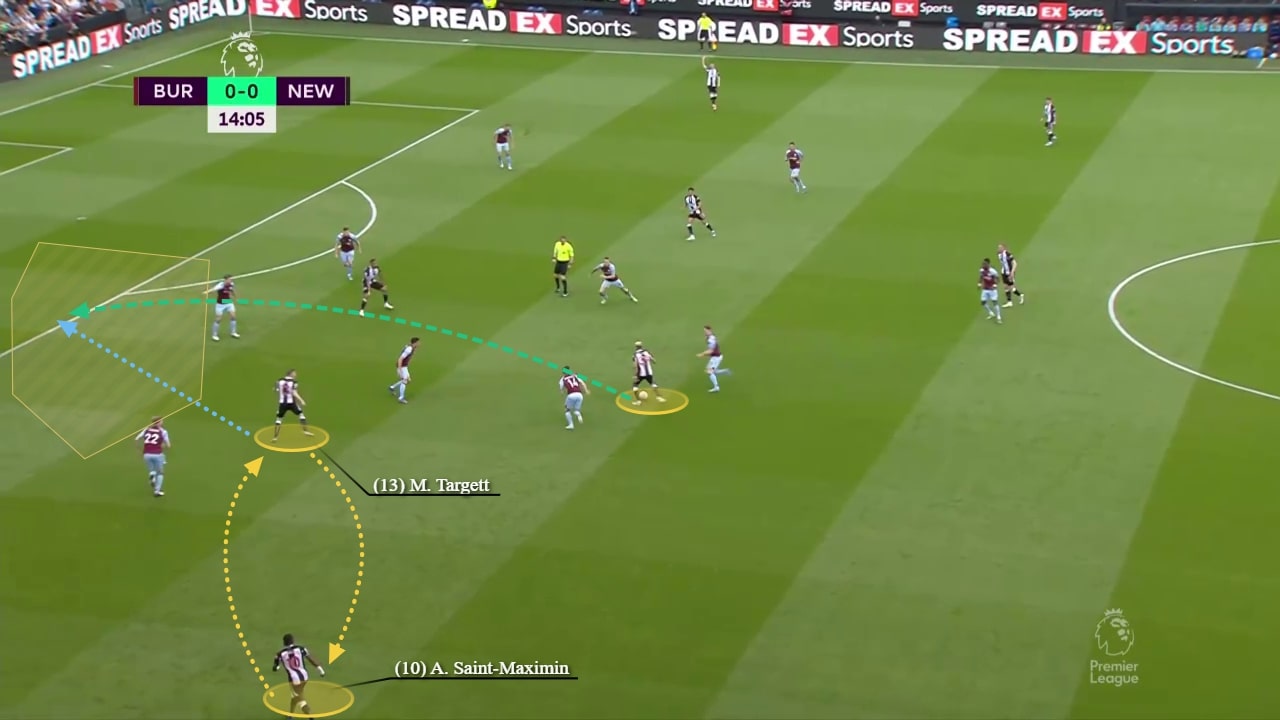 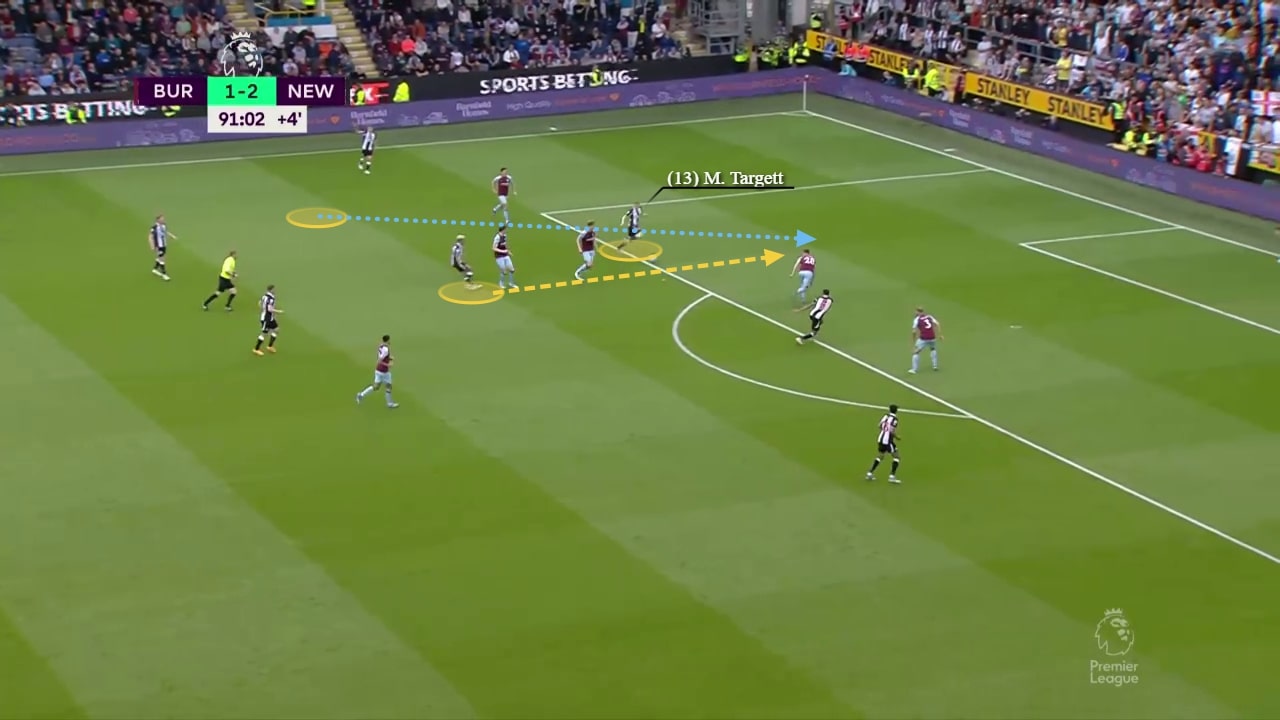 Switching the focus to his defensive duties, and this is an area where his value has been arguably even more evident. Attentive, positionally sound and awake to threats as a result of his constant head checks, Targett’s presence has added calmness and solidity to Newcastle’s backline.

Forging a terrific understanding with fellow January newcomer, Dan Burn, the duo have hit the ground running to instantly make Newcastle a much more formidable rearguard to breach. Covering for one another, getting their spacing spot on and communicating effectively, opponents have rarely found much joy in their area of the pitch.

Determined, diligent and reacting sharply when he needs to step out to apply pressure when his man drops deep and when leaving his post to make a challenge, his judgement and execution of his interventions sees him break up many attacks. 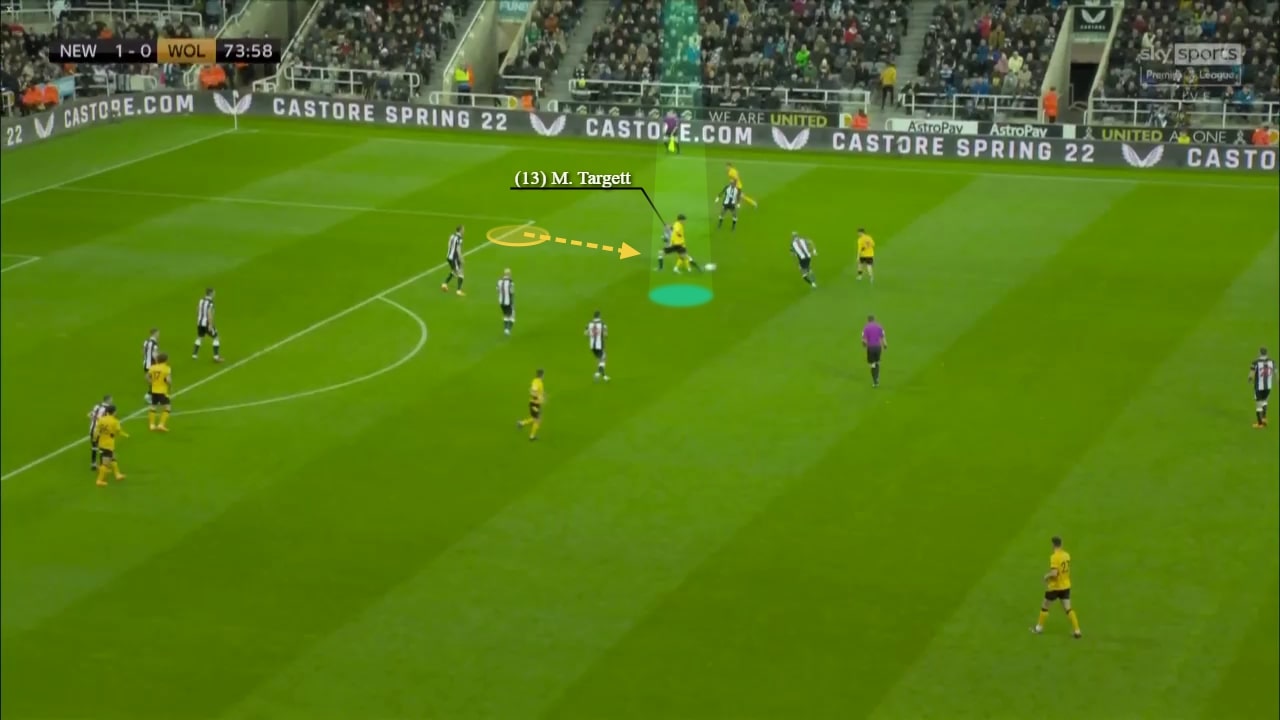 Moreover, how he remains awake to runners in behind and when opponents are looking to exploit his blindside from crosses from the opposite flank have enhanced his value. 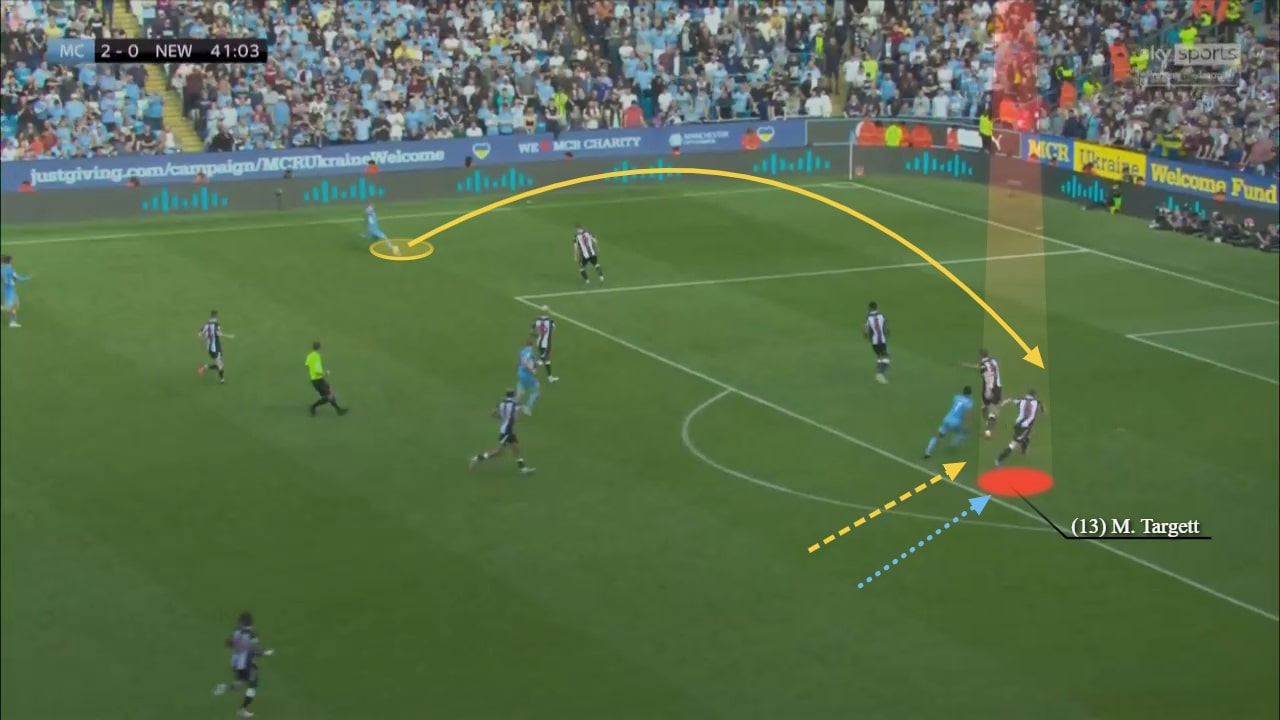 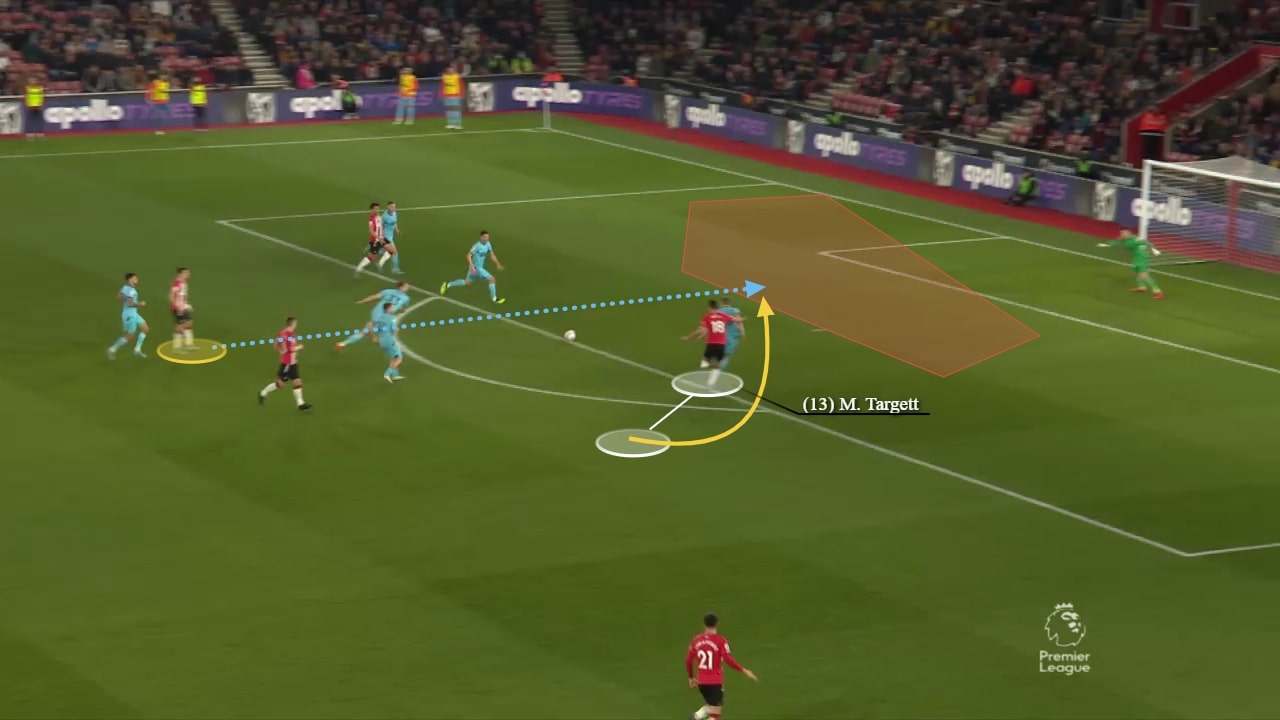 Strong in 1v1 duels due to his anticipation, nifty reaction times, strength, powerful legs and how he likes to get touchtight while not overcommitting compounds issues for his adversaries.

Holding his own in aerial battles as well, the 183cm stopper picks up the ball quickly to set himself prior to his duels. By remaining balanced and withstanding pressure from his direct opponents, who are usually less physical and smaller, this enables him to win a large chunk of his headers. Whether it be helping clear crosses into the area or winning second balls so his team can regain possession, this has been a vital piece of his defensive game. 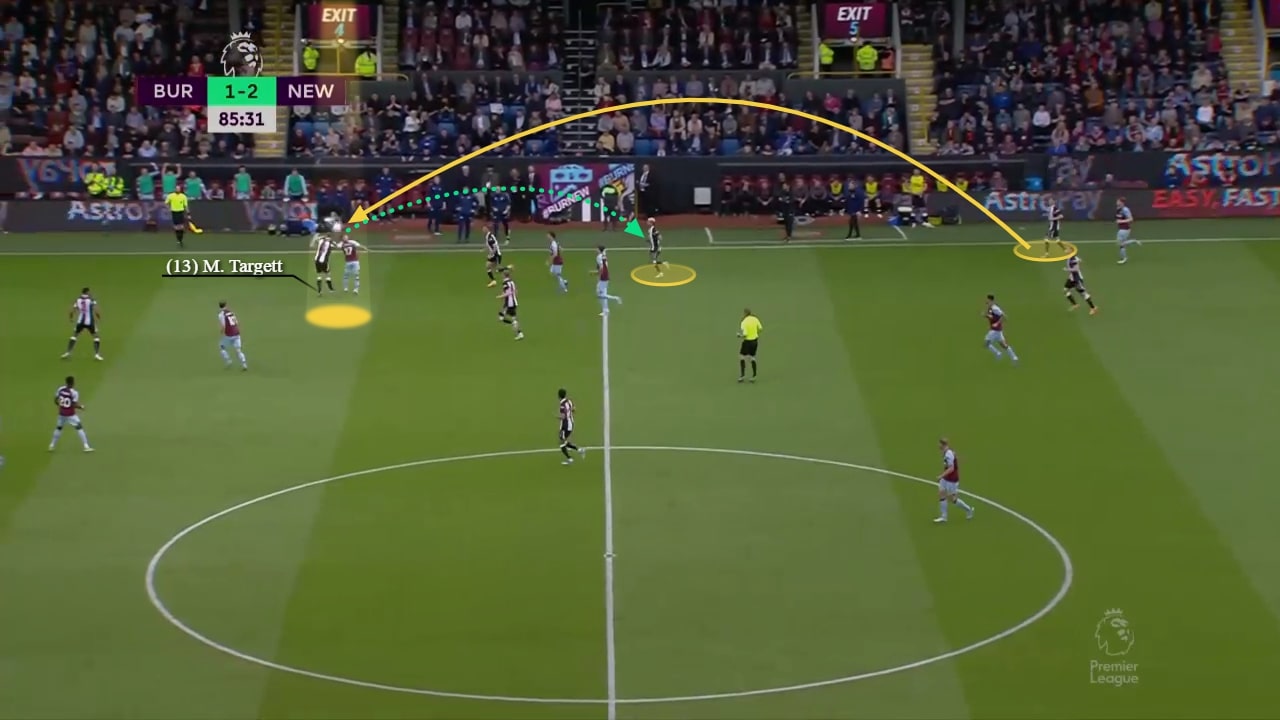 Fundamentally sound and rarely making mistakes, his ability to repel his foes is highlighted by the numbers that state he ranks in the top 19% for aerials won (1.72 p90) and top 26% for interceptions (2.19 p90).

“Defensively, Targett has been superb, providing cover behind wide-man Allan Saint-Maximin, who is reluctant to track back, and consistently making simple but correct decisions. He has also formed an excellent understanding with Burn and, given Newcastle’s long-term problems at left-back, has been a refreshingly reassuring presence down that flank,” aptly explained Chris Waugh in the Athletic.

“Before Targett joined, Matt Ritchie, a converted winger, had sometimes been forced to fill in at left-back and, defensively, it was seen as the weakest area in the team. But Targett has drastically altered that perception.”

Consistent, disciplined, reliable and durable, the news of his permanent signing has certainly been well received by the Newcastle fans, who saw first hand how good he is during his impressive loan spell.

Looking ahead, the challenge will now be building on his wonderful form for next season. If his previous efforts are anything to go by, however, expect the dependable full-back, who’s crucially already assimilated into Howe’s plans, to keep plugging away and delivering the goods.

While he may not be flashy or as eye-catching going forward as many, there’s much to like about having a player like him that fulfils his role to a high level with a minimum of fuss week in, week out.