Signing of excitement machine Hwang proving a masterstroke by Wolves 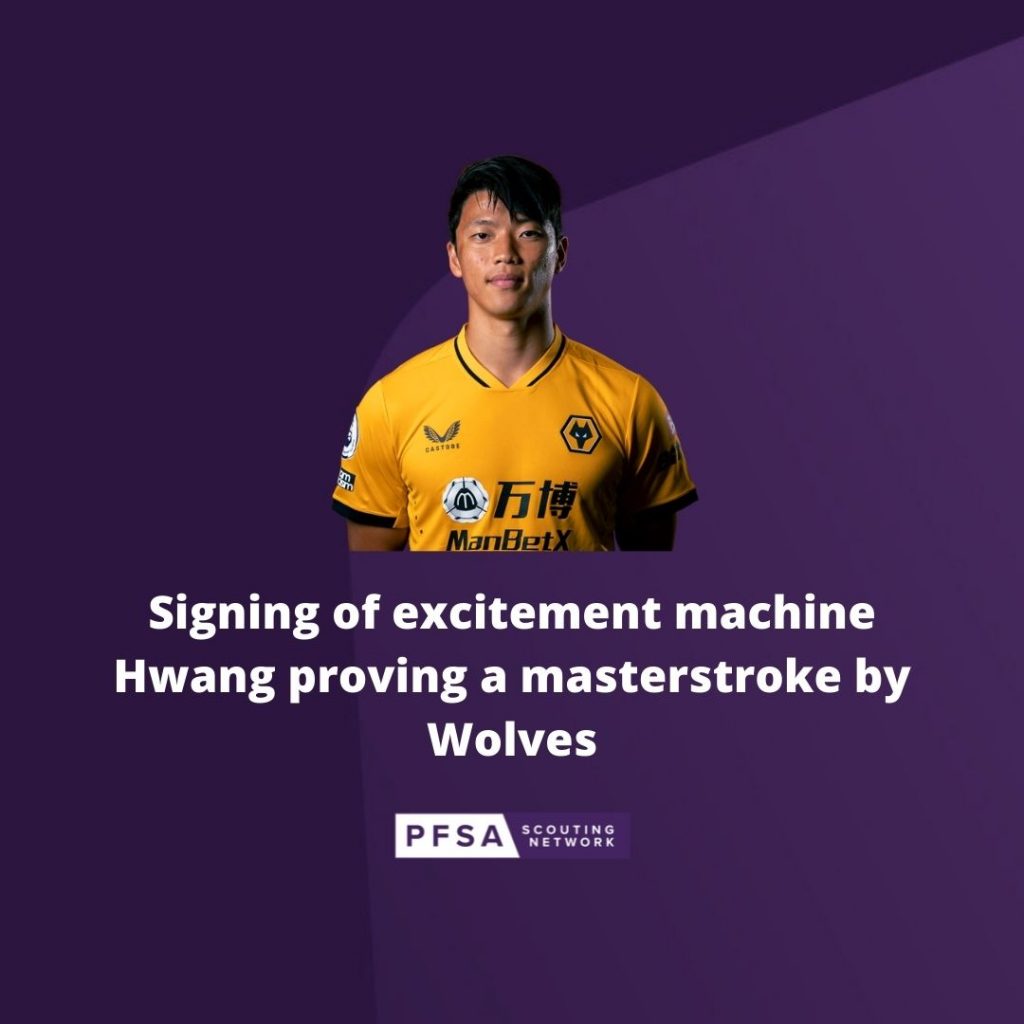 Since joining Wolverhampton Wanderers on loan from RB Leipzig in the summer, Hwang Hee-chan’s wasted little time in proving his worth.

Already scoring four goals in just 428 minutes of action for Bruno Lage’s men, he’s been a real X-Factor. Brimming with enthusiasm, energy and full of running power, the South Korean international’s quickly endeared himself to the supporters, his manager and his new teammates.

Whether coming off the bench or starting matches, he’s stamped his mark, giving defenders nightmares while injecting so much excitement into Wolves’ offensive forays.

Aptly nicknamed “The Bull” due to his all-action, high-intensity style, scoring on his debut was the perfect way to kickstart his career at his new club. “It was an honour for me to score a goal on my debut, especially in the Premier League,” he told Sky Sports.

“It has been my dream to come here since I was little. I was very happy and I really appreciate the people who helped me to move here, including my family.”

Versatile and able to play as a striker or anywhere across the frontline, the 25-year-old affords Lage plenty of tactical flexibility due to him being competent at operating in a range of roles depending on the situation. “I think Bruno Lage mainly wants me to play as a left winger. However, he is trying to give me lots of freedom in terms of position, allowing me to go to centre-forward or the wings, playing in whatever position that I need to be,” he explained.

Getting on the scoresheet against Watford, Newcastle United (twice) and Leeds United has seen him get off to a flying start, with his goals being crucial towards their solid start to the new campaign.

Deadly with his movement and quick to exploit gaps within the opposition backline, Hwang’s ability to cleverly angle, time and direct his movement has been a big weapon. Upon seeing defenders getting dragged out of position, if they’re caught ball watching or preoccupied with a marking assignment, he’ll immediately pounce.

His aptitude in this regard has importantly transferred into his movement into the box, where he exhibits fine awareness and knowledge of what spaces to target to increase his chances of scoring. 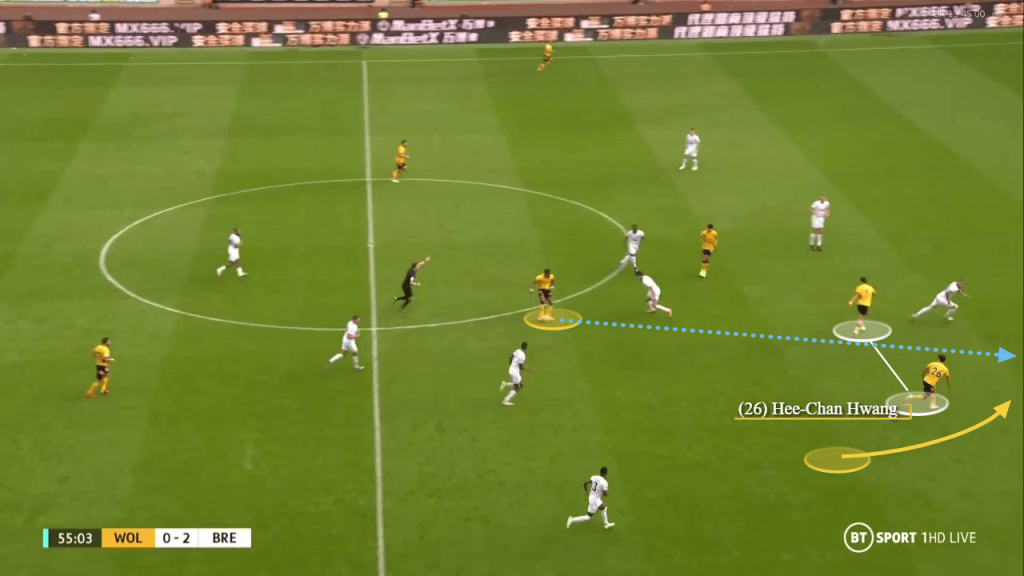 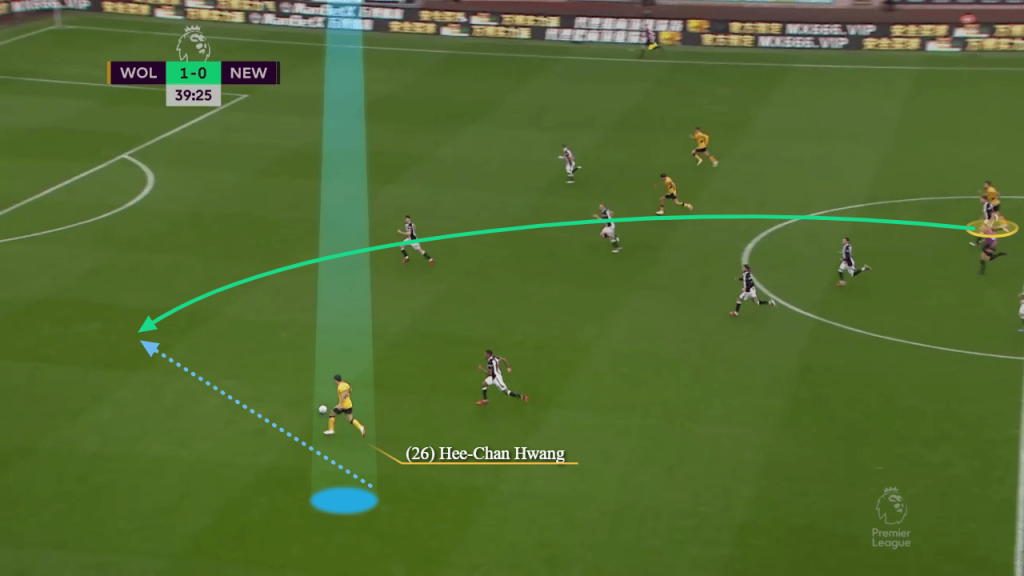 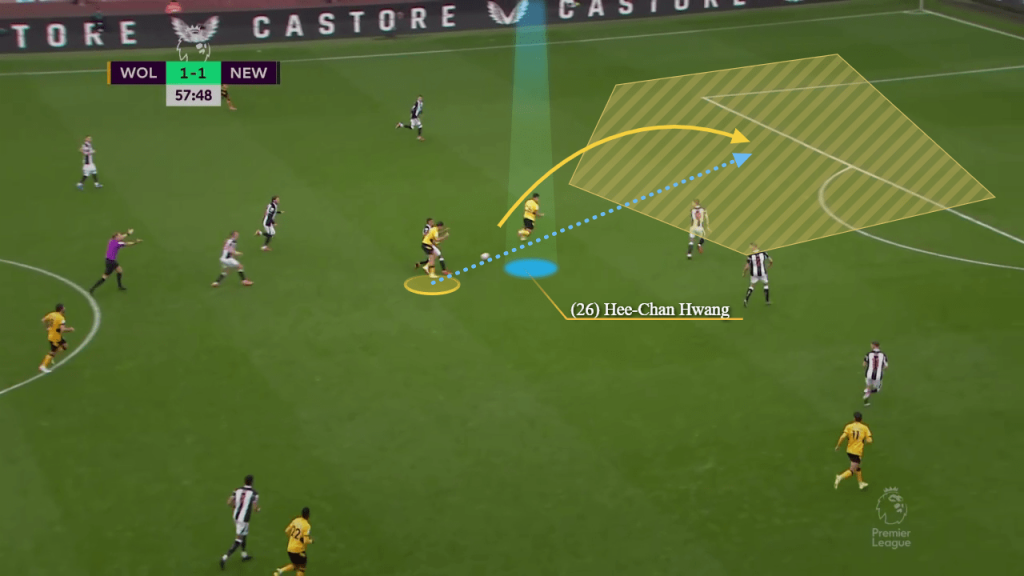 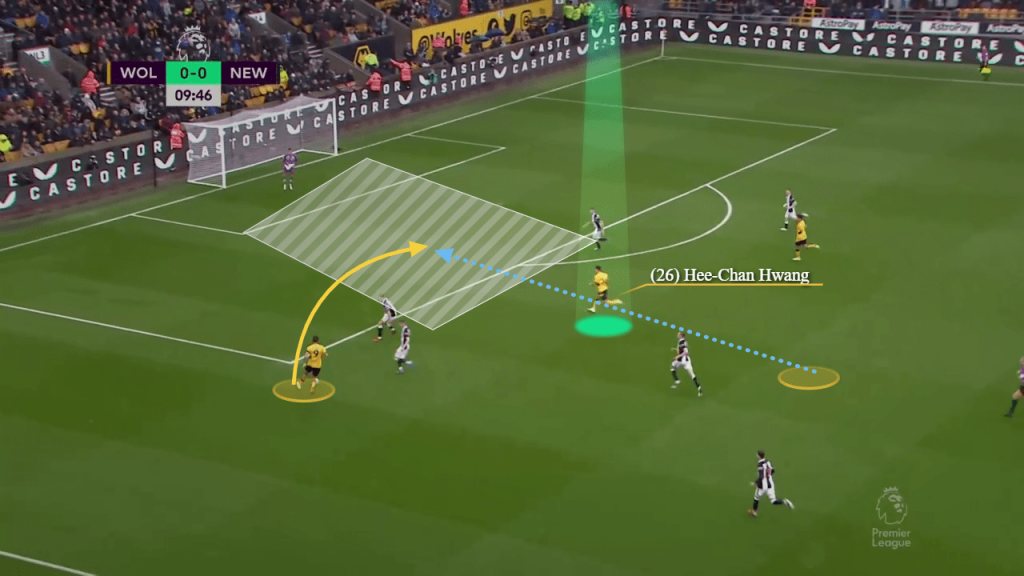 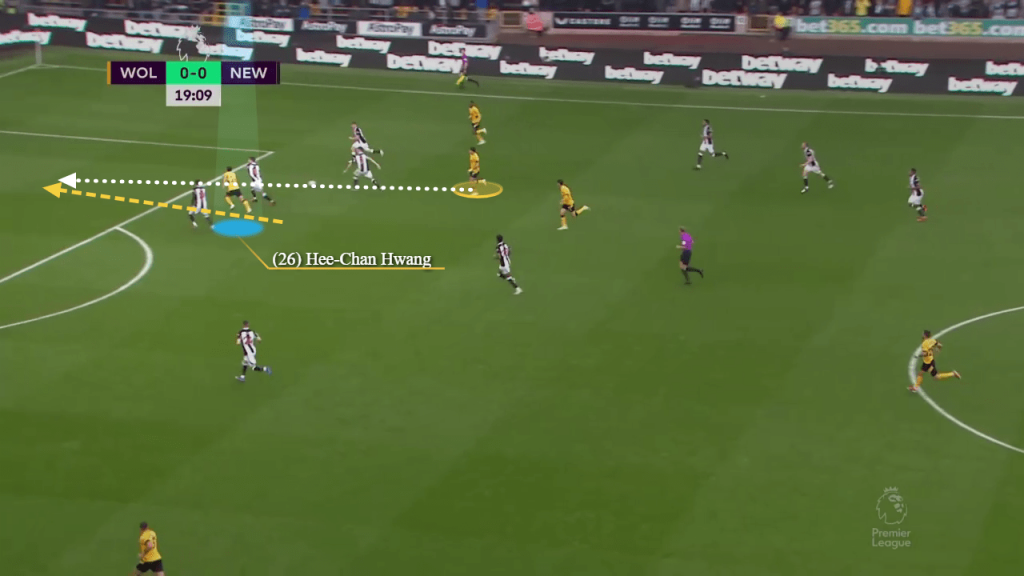 Full of speed and rapid off the mark, this duly helps his cause when embarking on runs in behind, when peeling off the blindside of his tracker and in counter attacking sequences.

Due to his nuisance in this regard, a key byproduct that arises is that he drags defenders out of position, which creates spaces for others to attack while the defence is unbalanced.

Aside from stretching backlines with his depth movement, it’s also been notable how he finds room between the lines centrally and in the half spaces, plus how he rotates smoothly with his fellow attackers. Having worked under many tactically astute managers in the form of Oscar Garcia, Marco Rose, Jesse Marsch and Julian Nagelsmann, his high footballing IQ should see him have little issue completely adapting to Lage’s system.

Developing an exciting relationship with striker Raul Jimenez, much encouragement can already be extracted from their partnership, which bodes well for the future.

Showing his sound finishing qualities at this early stage, plenty of upside can be found in this area of his game. Not afraid to unleash shots once in range, he combines power, finesse and placement. Although he can take some low percentage shots, his instincts usually serve him well, something that’s impressive considering he’s not an out-and-out striker.

Typically accurate and confident too when in position to shoot, Wolves will be hoping he can keep up his super form in front of goal. 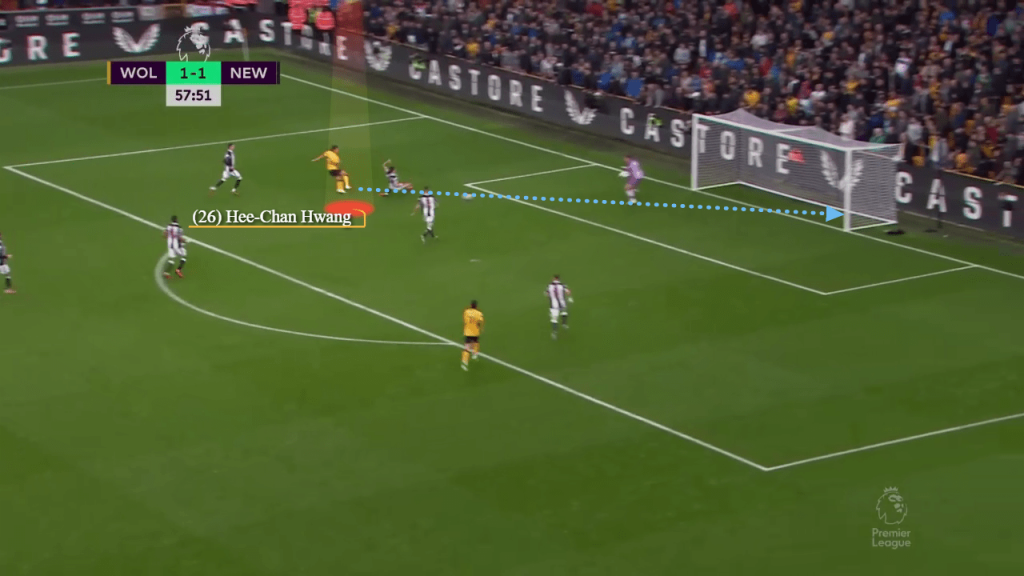 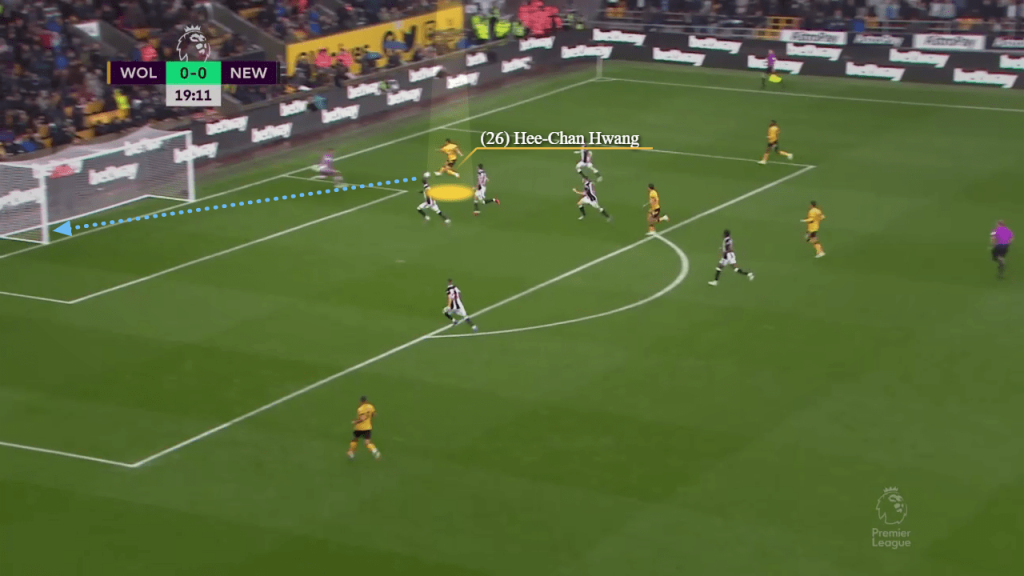 An explosive dribbler who can scorch across the turf rapidly to gain territory, commit defenders or beat them, Hwang’s a menace with his ball carrying. Hard to read, pacey, unpredictable and boasting an array of shimmies and alterations to beat markers, opponents have found him difficult to stop. 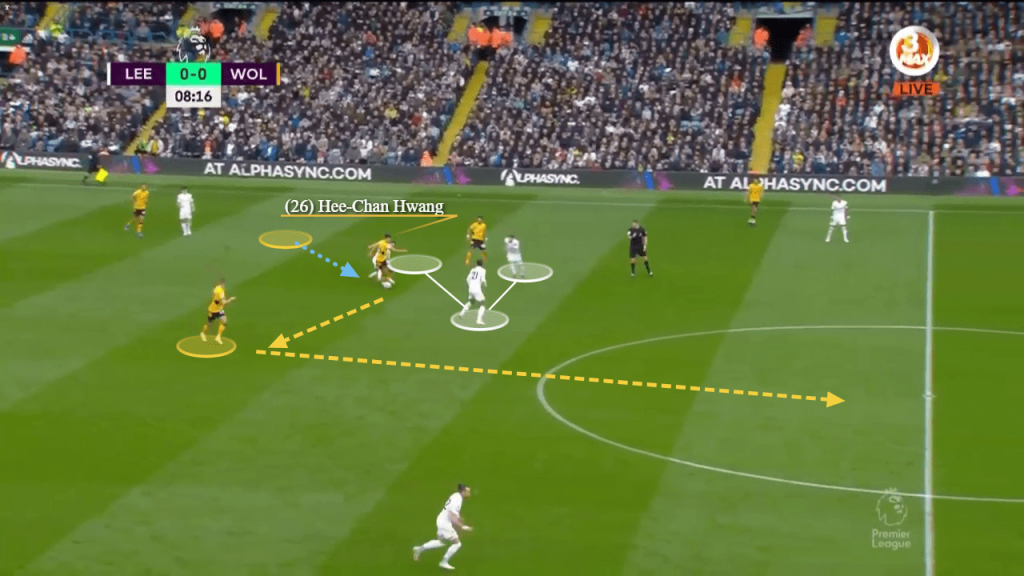 Handy at generating chances for colleagues in the final third, teammates should enjoy getting on the end of some of his neat through balls, cutbacks, crosses, deft flicks and one touch passes. While he can hit the odd sloppy pass or lose concentration, there’s no doubting the positives outweigh the negatives. Indeed, the fact he laid on 22 assists in his final season with Red Bull Salzburg illustrates his aptitude in this compartment. 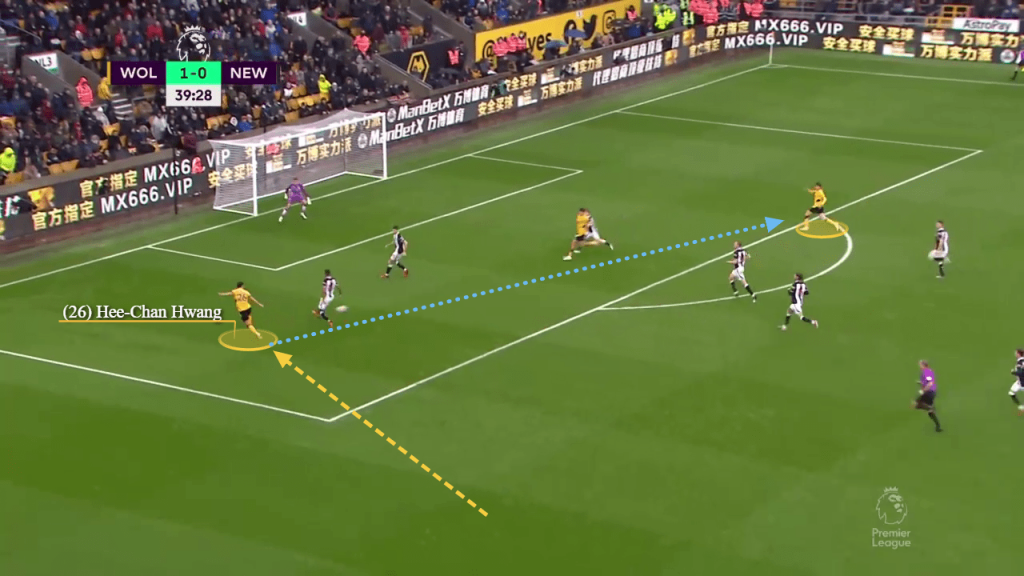 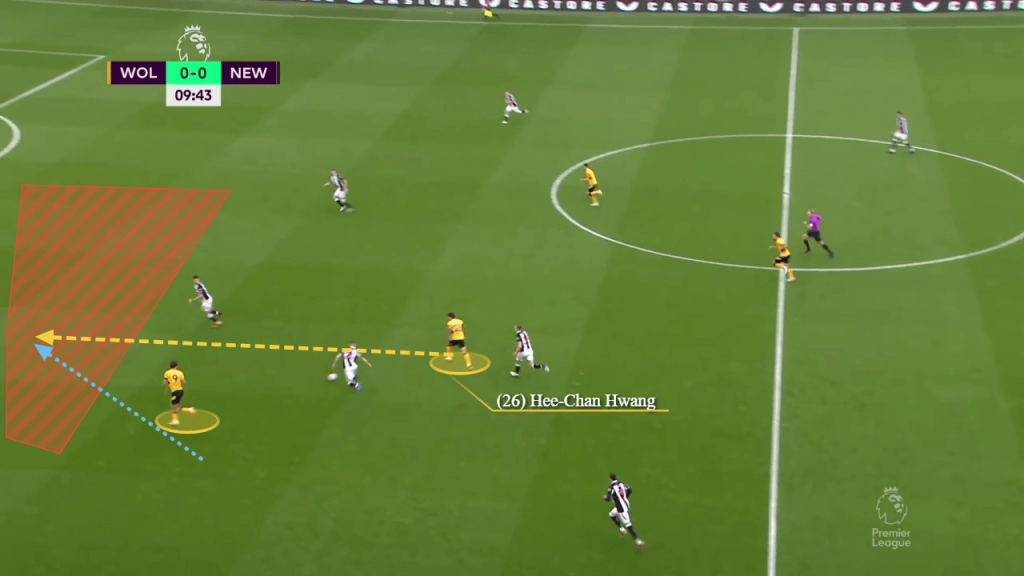 A real workhorse defensively, this, in combination with working under some masterful pressing coaches in the Red Bull framework especially, it’s unsurprising he’s an asset here as well.

Aggressive, tenacious and knowing when to press while blocking passing lanes behind him, expect him to persistently regain possession with his ferocious harrying and counterpressure.

Set to be a fantastic addition to the squad, who can hurt opponents in a variety of ways, it’s little wonder Lage was so keen to bring him in after previously scouting him. “I know the player because I followed his time in Austria and then in Germany. When the name appeared (as an option for a loan deal) it was clear we could put him in our squad because he’s one guy to help us,” Lage told The Athletic.

“For me as a manager, we need this kind of player to manage the game in the way we want to play.”

Hardworking, dedicated to his craft, immensely talented and possessing an exemplary attitude, all the early signs point to his signing being a tremendous success.

Following his struggles to find his feet in Germany with RB Leipzig and seeing how well he’s adjusted to life at the Molineux, turning his loan into a permanent move will be something Wolves should be looking into sooner rather than later.