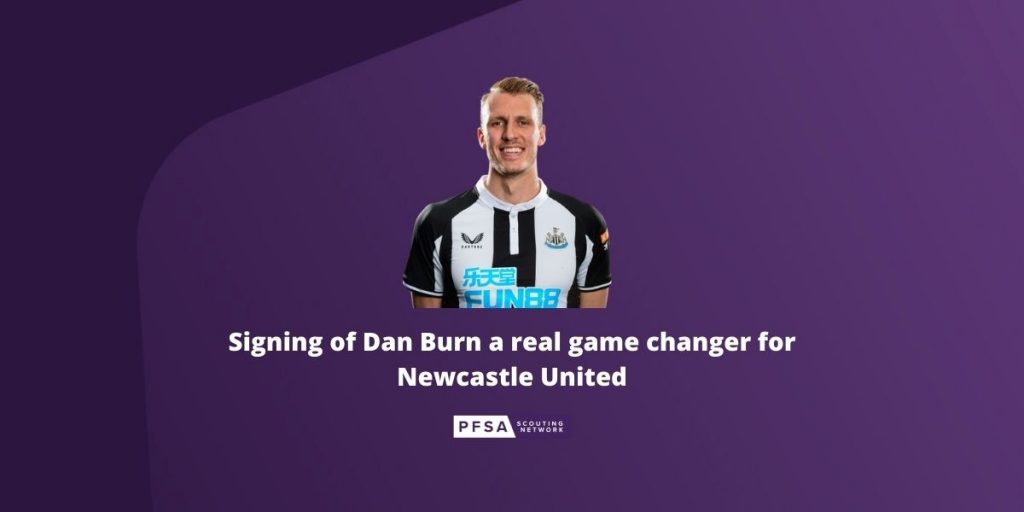 Although the deadline day signing of Dan Burn from Brighton & Hove Albion didn’t excite the Newcastle United fans like those of Kieran Trippier, Bruno Guimaraes and Chris Wood, those inside the club knew what a significant capture this was.

Bringing experience, versatility to play at both centre back or full back and a brilliant tactical understanding, the 29-year-old’s been extremely impressive since joining in January for £13 million. Vindicating the club’s faith in him already, Burn’s put in some quality laden displays against Aston Villa, West Ham United and Brentford.

Transferring his wonderful form from his time at Brighton under Graham Potter, where he grew into a formidable stopper at Premier League level, Burn’s slotted in seamlessly into Eddie Howe’s team.

Fundamentally sound and operating with confidence and assuredness, his stopping work has been littered with upside for his new employers. A dominant physical presence, his strength in duels both on the ground and in the air have seen opponents struggle to enjoy much success against him.

Reading the play proficiently and awake to the movement of his opponents, this sees him get touchtight to foes so they can’t control cleanly or enjoy much time and space. As a result, he often forces turnovers when his man tries to drop deep with their back to goal and if they try to receive in an open body posture, with him rapid to pounce on the chance to regain possession. 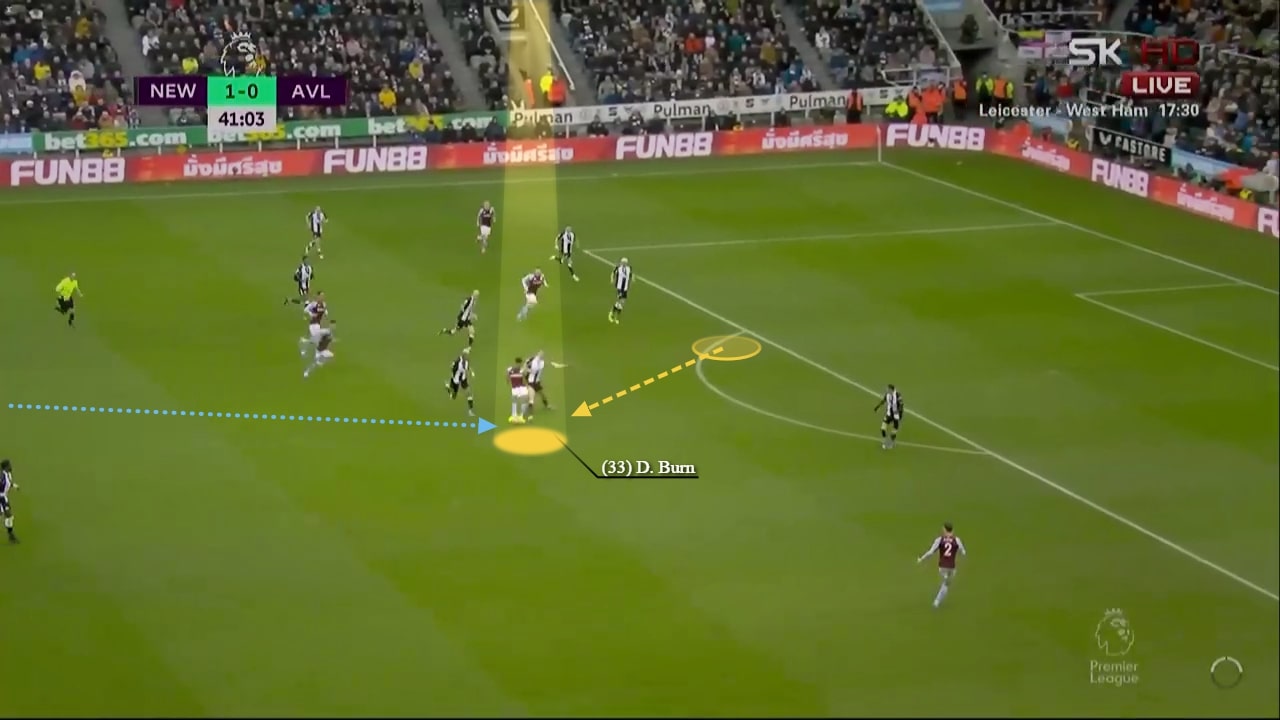 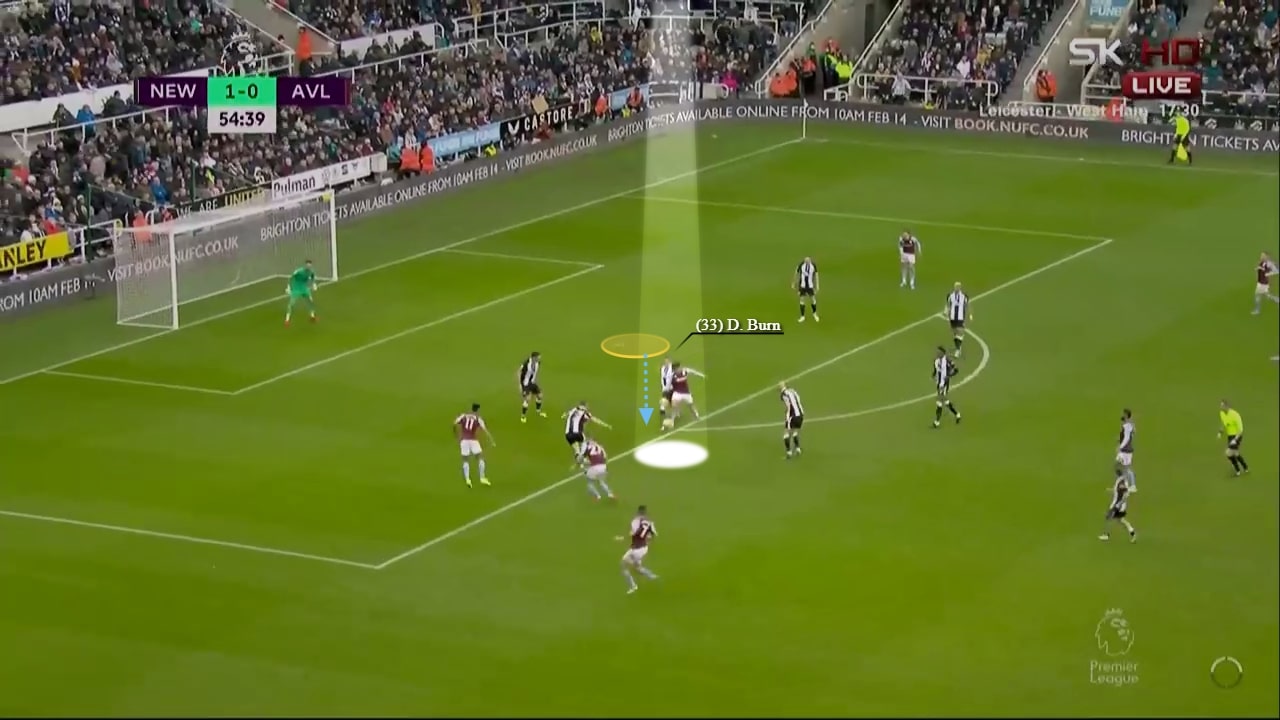 Timing his tackles well and good at 1v1 duels, his hulking frame and long legs ensure he’s a difficult man to beat in isolation battles, for he stretches out to intervene, uses his arms to slow down markers and reacts quickly to their dribbling maneuvers.

In addition, Burn, who stands at a towering 198cm, has unsurprisingly shone in aerial duels, with his size, judgement of the ball’s flight and concentration meaning he’s won a large chunk of headers. Whether posing a threat at both attacking and defensive set pieces, clearing crosses or helping his team win second balls following goal kicks, he’s proven his worth in this compartment. 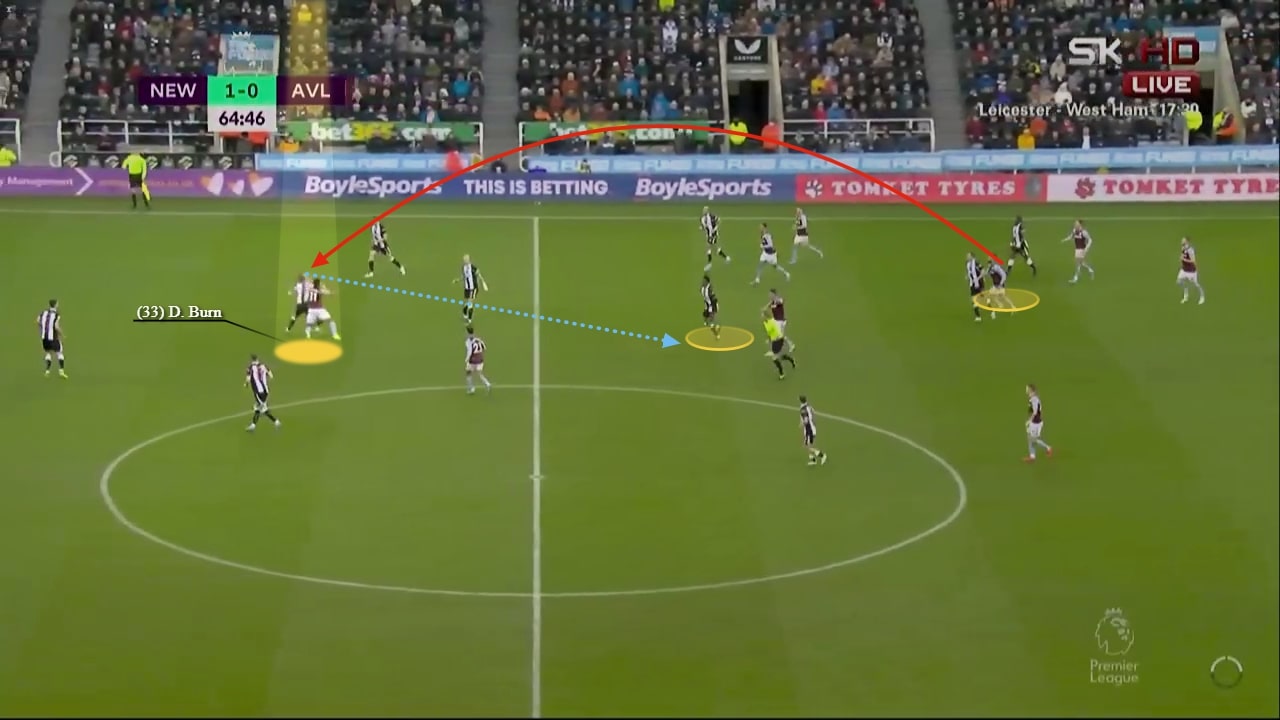 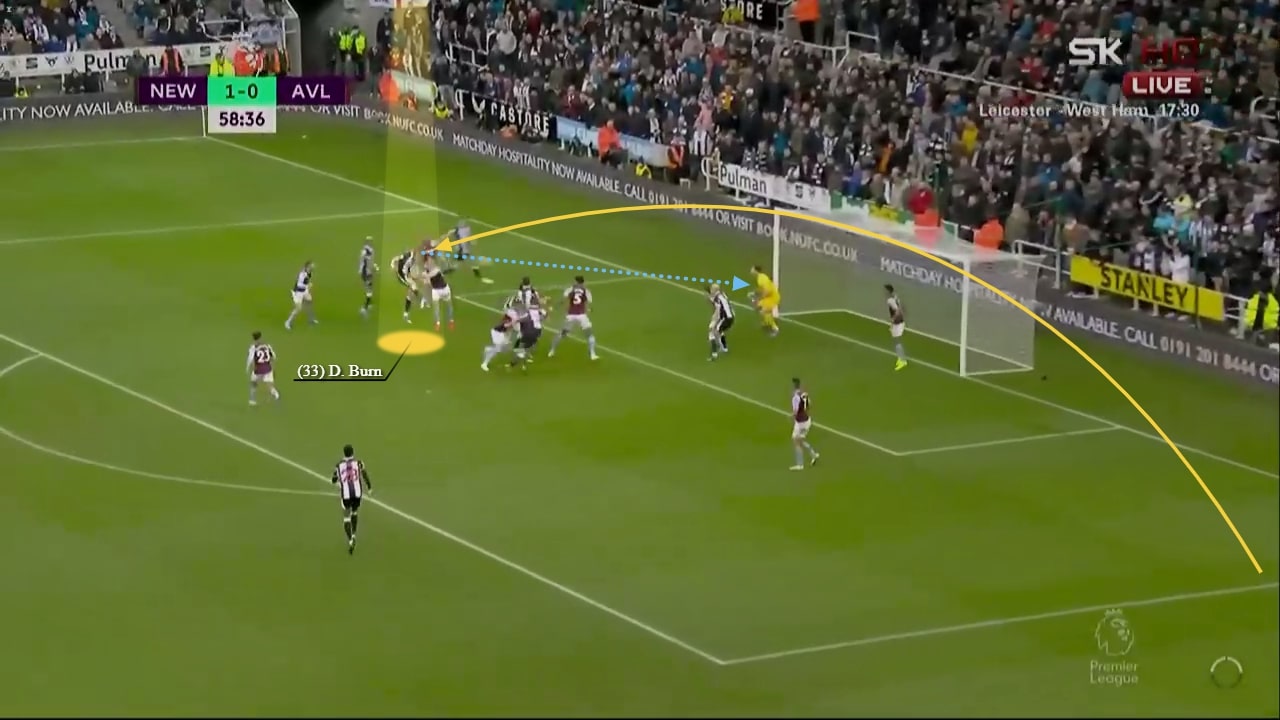 While he’s not blessed with searing speed, his positional awareness, head scanning and powerful, crouched, side-on posture help make up for any deficiencies in pace. Attentive to runners in behind, down the channels and into the box, he typically fulfils his marking assignments. In addition, how he drops back to support teammates, covers for them if they step out and takes on runners from midfield adds to his worth. 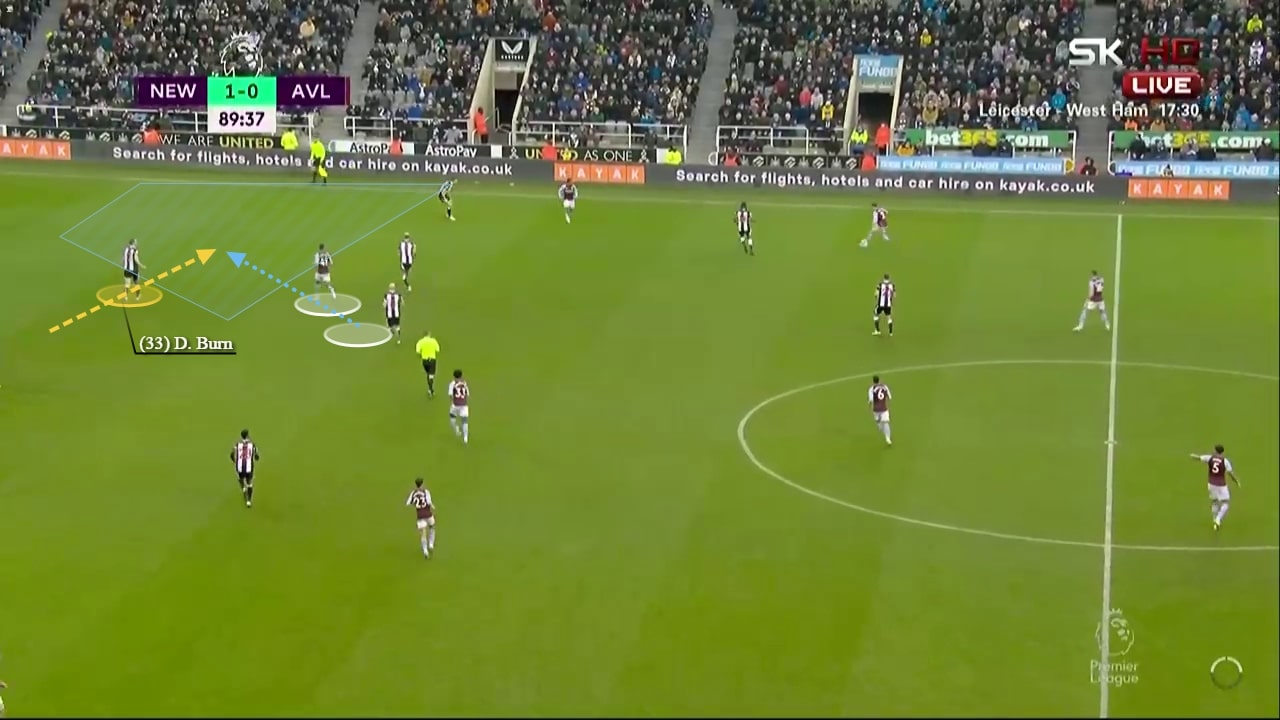 Giving the Magpies some vital leadership, the way he communicates with his defensive comrades to alter their position to remain structurally sound and compact, make them aware of nearby threats or advises them of dropping attackers into midfield have been extra highlights. “Dan has fitted in really well and has used the ball really well. He’s been composed, talked well and has leadership qualities,” explained manager Howe.

Making minimal mistakes and fitting in superbly, his presence has been a huge boost to Newcastle’s improved form, with them only conceding one goal since he debuted while winning two and drawing one of the three matches he’s featured in.

Equally accomplished in possession, there’s already been many signs where his aptitude here has shone for Newcastle. Seeing as Howe is eager to build out from the back, Burn is certainly an ideal man to fill this brief due to his considered passing over a range of distances.

Concise, accurate and weighting his passes ideally to beat the press and so his target can cleany control them, he moves the ball with incision and purpose. Consequently, there’s been countless times when he’s broken the lines, switched play smoothly, altered the angle of attacks while waiting for a weakness in the opposition block and played some crafty through balls over the top. 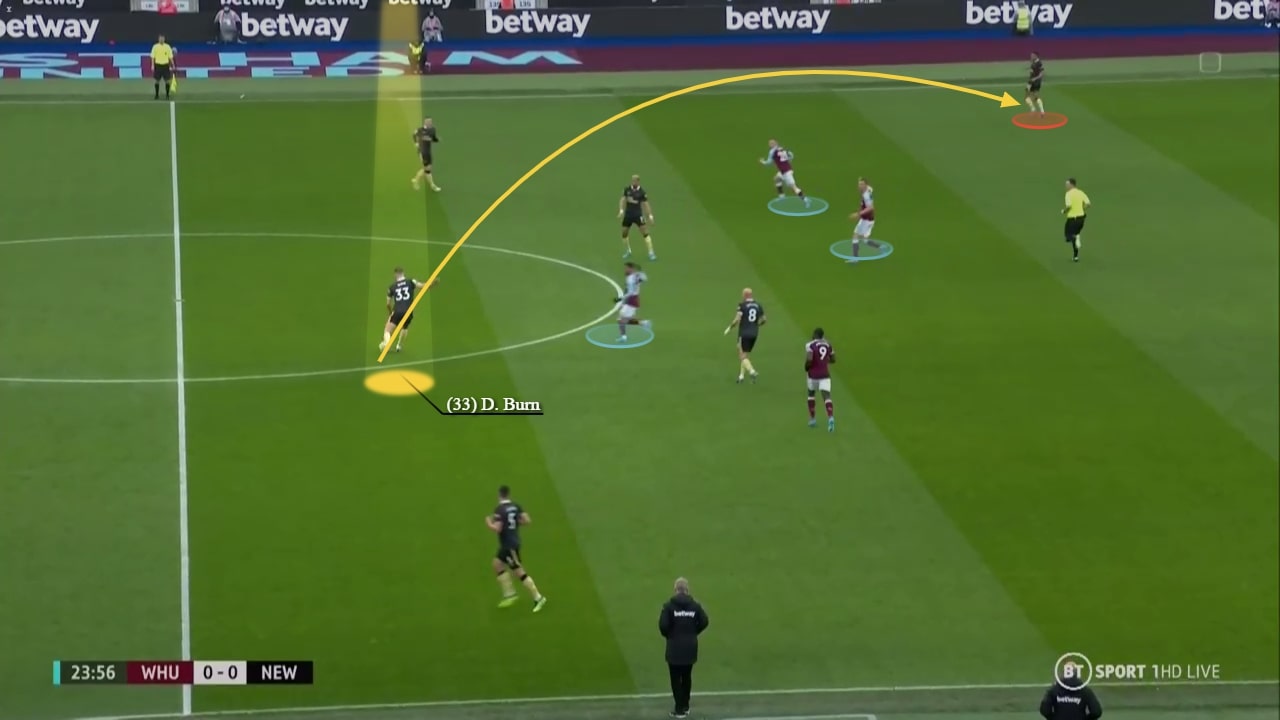 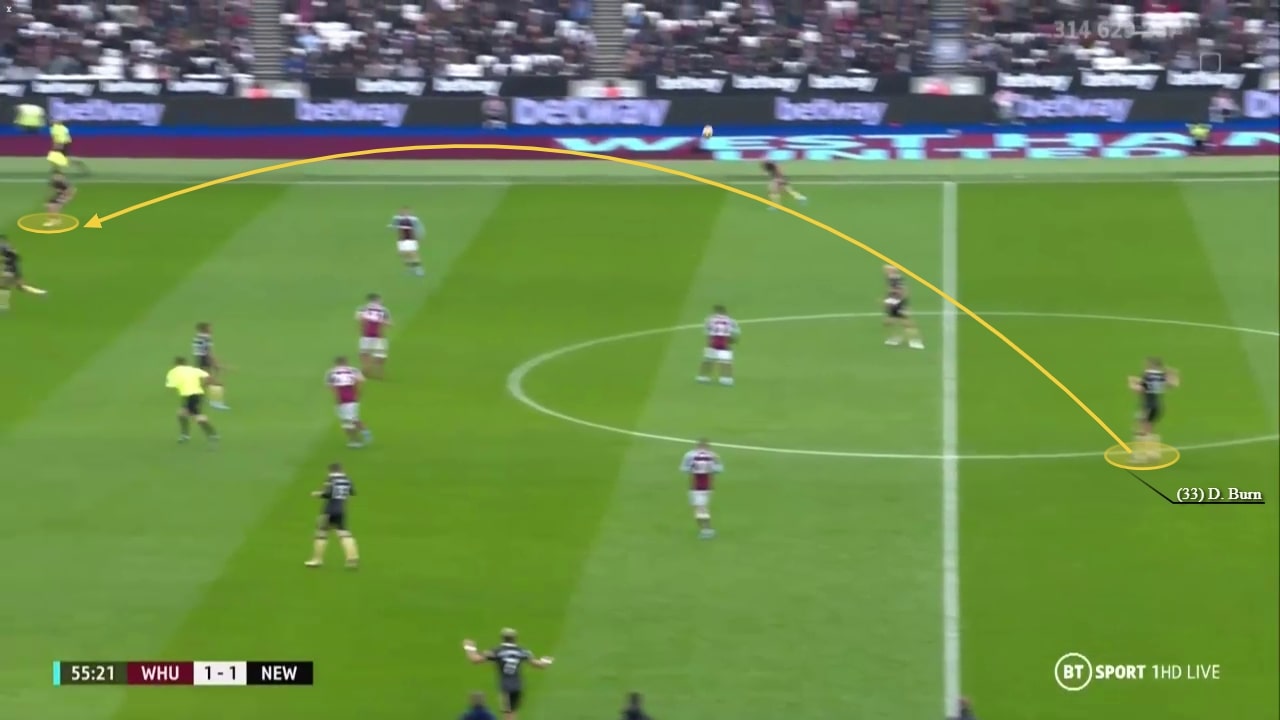 Handling being pressured without fuss and maintaining his composure has meant he expertly draws out pressers before then exploiting the vacant spaces directly or through instigating a third man combination.

If the opposition doesn’t press him or he is the free man, Burn doesn’t hesitate to embark on driving dribbles to lure out opponents and help his team take advantage of potential openings. Although he sometimes loses possession, his judgement, solid first touch and ball control mean he often succeeds when marauding upfield with the ball at his feet.

Coach Howe was full of praise for Burn, and fellow new signing Matt Targett, when asked recently on his latest arrivals. “That’s great to see. I think Dan’s fitted in really well, as has Matt, on that left-hand side of defence. You’ve got two new players there. Both have taken to what we’ve asked them to do excellently,” Howe gleamed.

“They’ve defended very well first and foremost, which is obviously their job. They really have helped our team. I think Dan, especially, has used the ball very well, very composed. Talked well. He’s got leadership qualities. Really pleased with both those players.”

Returning to his boyhood club and looking right at home already, all the signs are there that Burn will be a fantastic acquisition for the relegation-threatened Newcastle, who have now moved four points clear of the drop zone due to their improved form.

Instilling so much more confidence in those around him and serving as an integral figure in bolstering their previously leaky defence, Burn’s impact has been nothing short of remarkable.

With all this in mind, signing a player of his ilk certainly looks like a game changer in their quest to avoid the dreaded drop and stay in the Premier League.