Sidelined Jansson such a big miss for Brentford 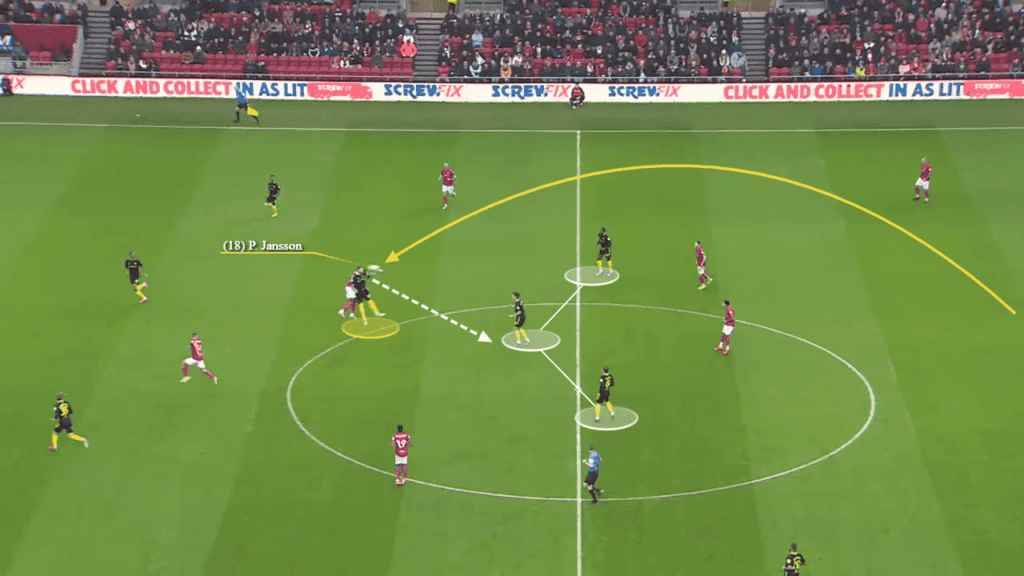 Having not played for Brentford since their smashing 3-1 win over Queens Park Rangers back in January, there’s no doubt Pontus Jansson’s absence has been heavily felt, for they’ve only won three of their subsequent eleven matches.

The fact they’ve conceded in every game during that period except three and used to hold the best defensive record in the Championship prior to his injury offers a further testament to how badly they miss the imposing Swede.

Joining from Leeds United in the summer, the acquisition of Jansson by the Bees has been a brilliant piece of business. Signing after a season of working under the tactical genius of Marcelo Bielsa at Elland Road, Jansson was quick to credit his former manager in a recent interview with the Guardian on how much he improved him. “I grew a lot last season, the things that I learned from him and we learned as a team, they are things I will take with me for the rest of my life,” he explained.

“I learned so much: how to take care of your body; how well-trained you have to be to play in such a good team; how you have to be on the pitch both physically and mentally; how to learn to read the game, so many things that you could learn from.”

Brentford has clearly benefited from Bielsa’s work, for whenever available the experienced leader’s been a huge asset for Thomas Frank’s men.

Undertaking his duties with a nice blend of composure and physicality, he’s certainly one of the finest defenders in the division. Positionally sound and great at organising the backline, the 29-year-old instructs his colleagues when to step out, shift across or drop back collectively.

If required to take on a marking assignment or support a colleague who has stepped out, he’ll swiftly leave his post to deal with the danger or contain the threat while his team recovers their shape. By scanning his surroundings, this enhances his awareness and knowledge of where nearby opponents are located and puts him in good stead to deal with many scenarios.

His reading of the play also ensures he’s well-positioned when crosses or cutbacks come into the box, for he quickly picks up the ball’s path to adjust his body shape to best deal with these deliveries. 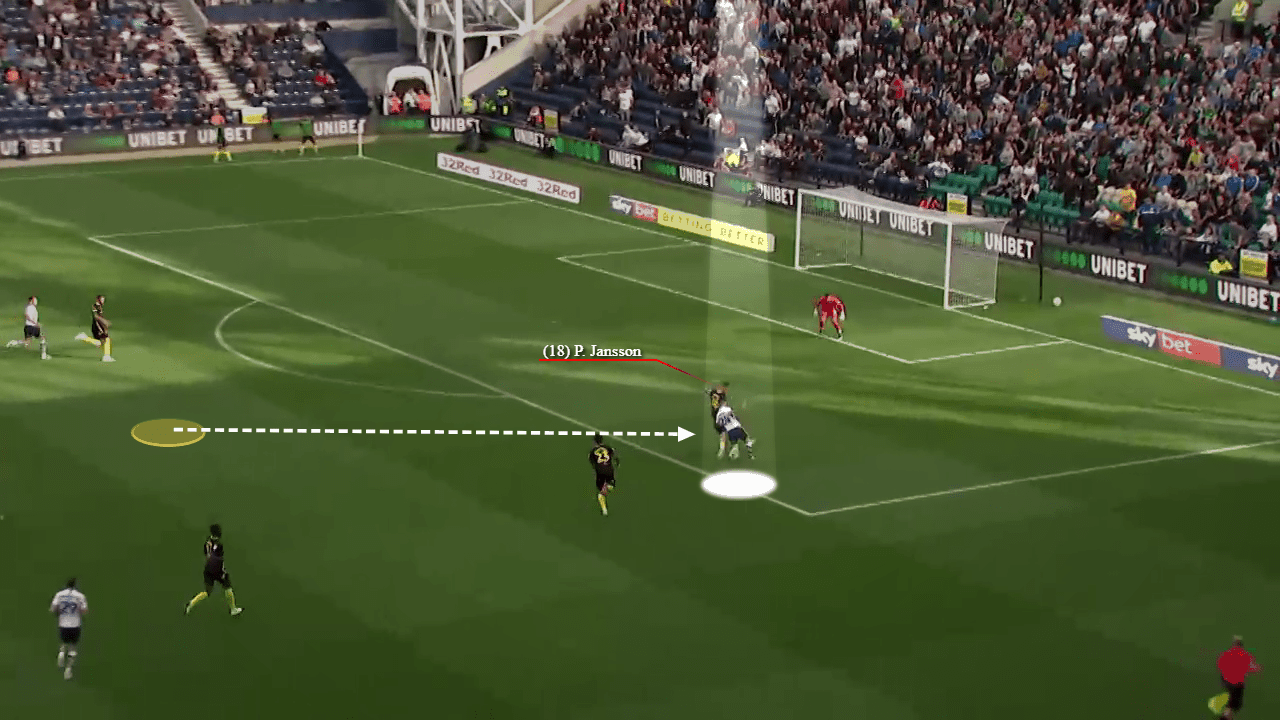 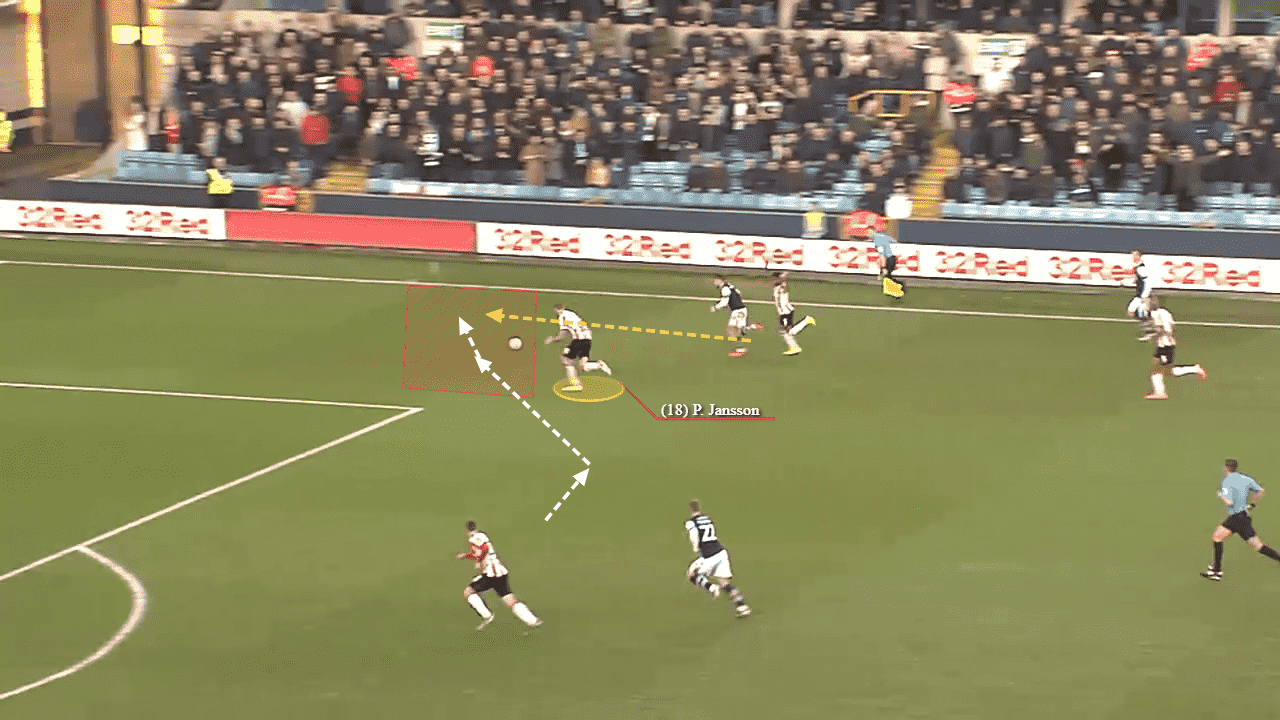 Awake to when his opponent drops deep and receives with their back to goal, in an open body posture or is receiving a poor pass, Jansson presses vigorously to heap pressure on his man. Indeed, by getting touch tight and imposing himself on his marker, this gives them little breathing room to control cleanly or make coherent decisions, thus heightening their chances of losing possession. 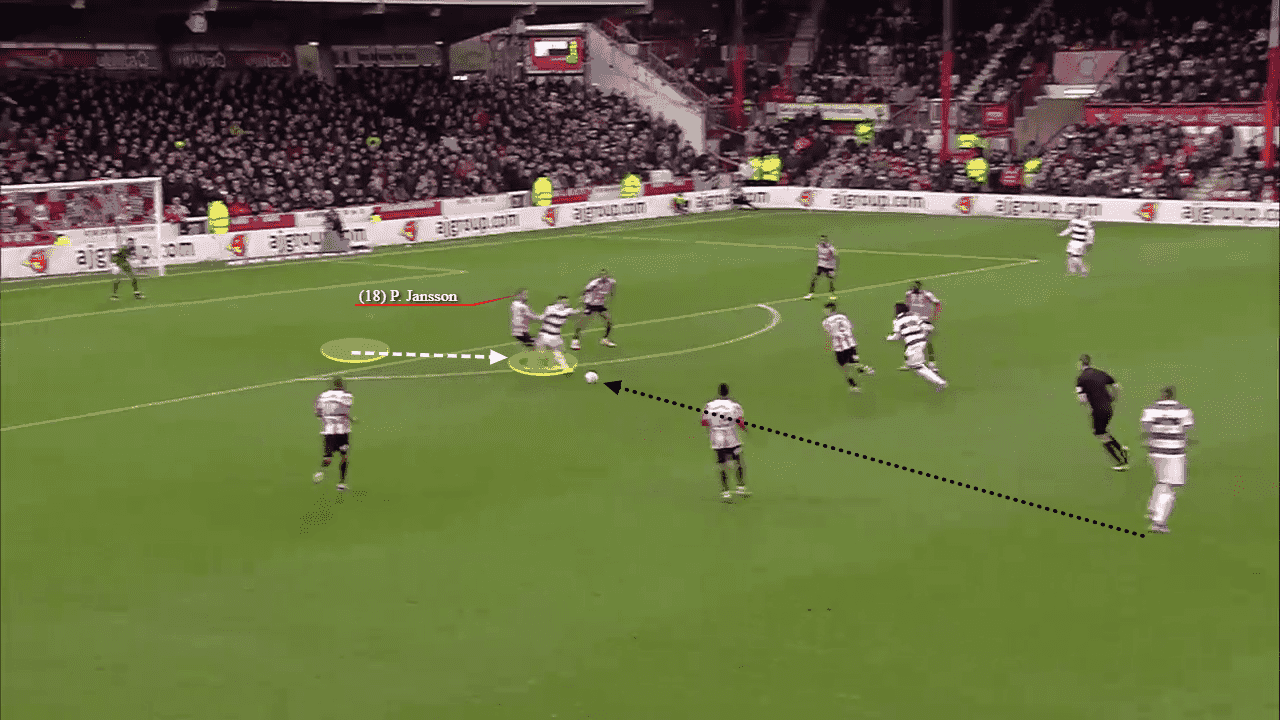 Fierce in duels both on the ground and in the air, opponents haven’t enjoyed an easy time as he applies his interventions with force and usually good timing to break up attacks. To focus on his aerial prowess, and he uses all of his 194cm hulking frame and judgement to outmuscle his foes and pick up the ball’s drop zone to win a large chunk of his headers. 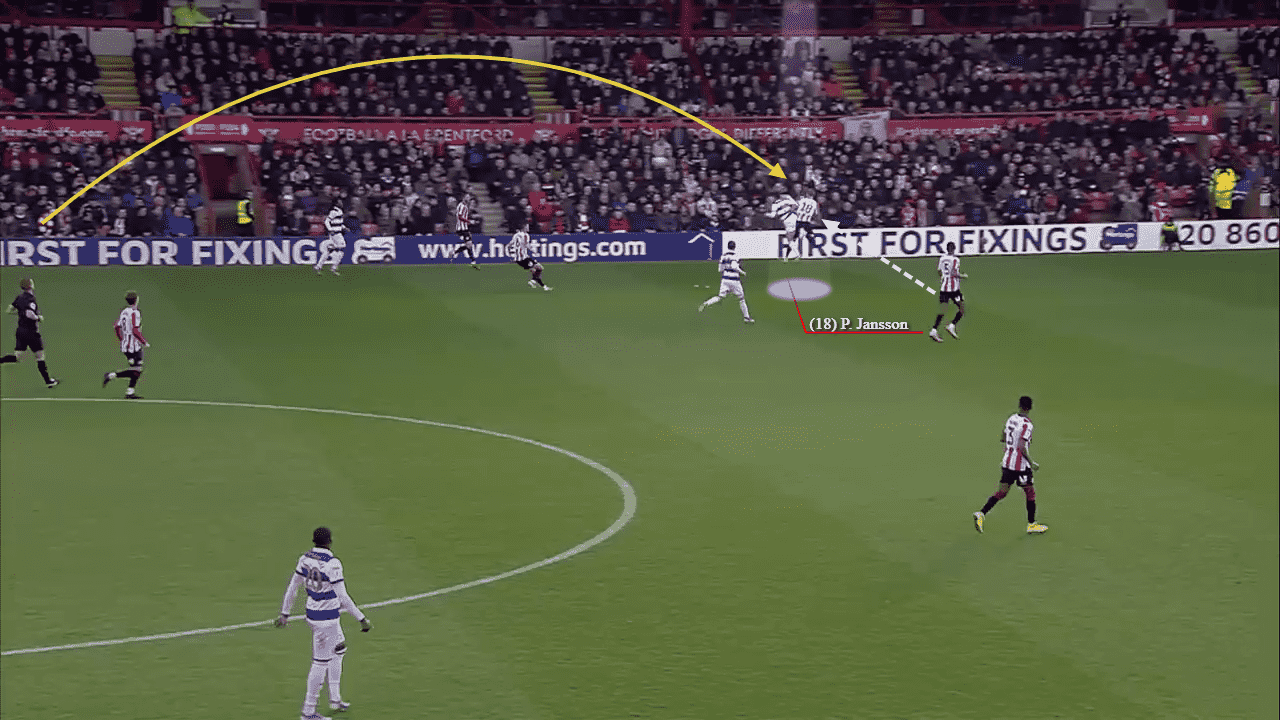 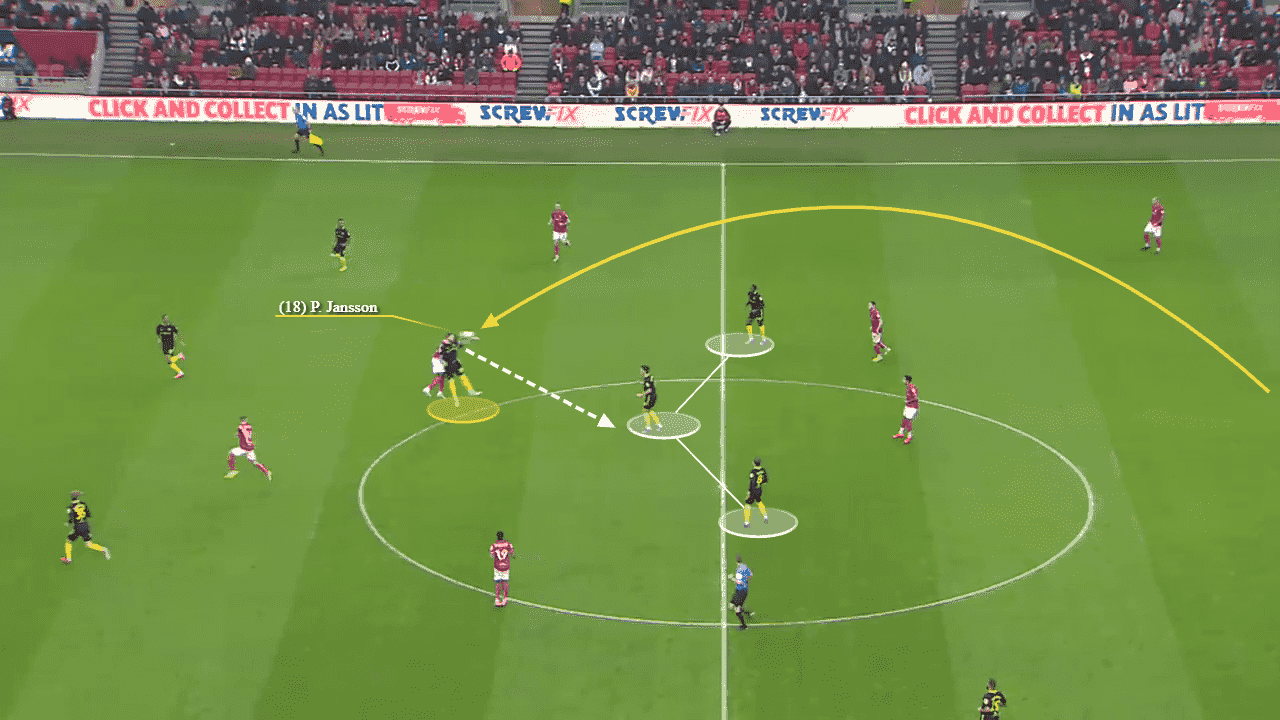 Not only is this vital in set pieces on both ends, but it’s also key in not allowing opposing forwards to win knock downs or flick ons so they can’t capitalise on coordinated second ball setups.

Never one to shy away from contact, he’ll always put his body on the line for his team, as he blocks shots, courageously challenges for headers and commits the odd tactical foul to help his team.

Meanwhile, on the offensive side, his passing and ball carrying have been highlights, just as they were at Leeds, as he’s fantastic at building out from the back and dribbling upfield to draw out opponents. Hitting penetrative passes and possessing a tidy range, Jansson can break the lines, switch the play, hit the odd through ball over the top and recycle possession calmly. 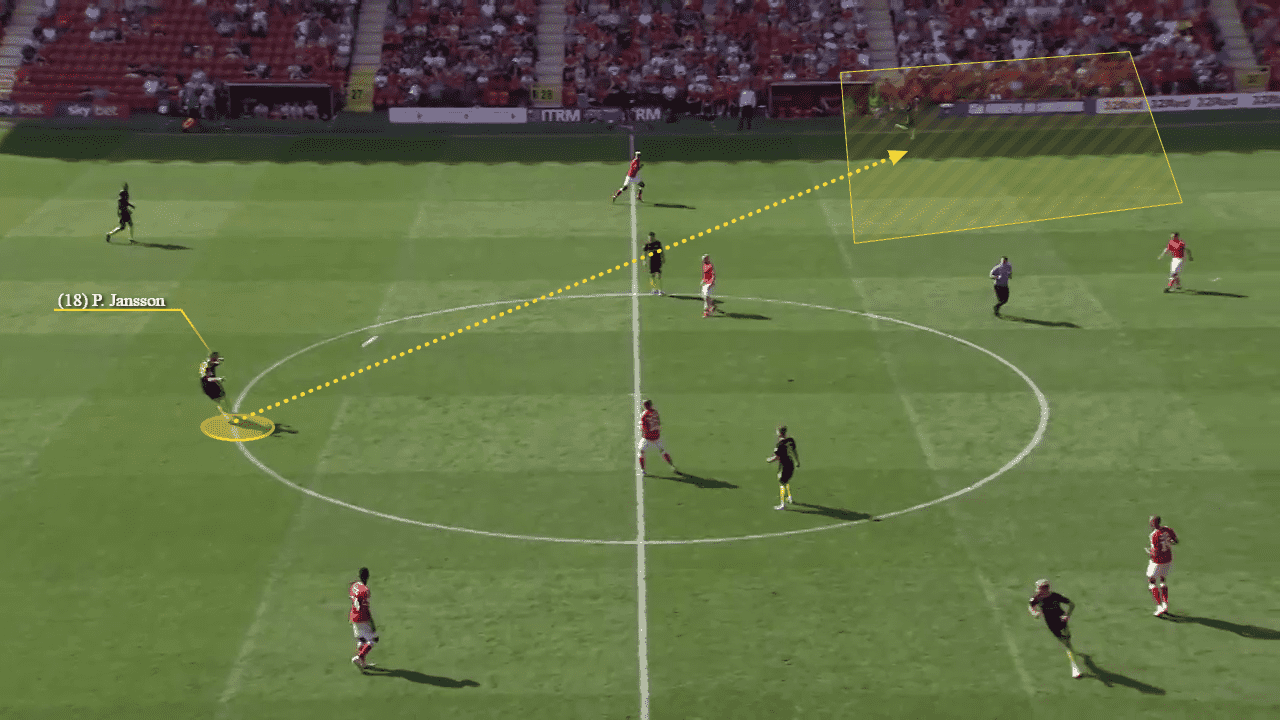 With reports suggesting he’ll be returning soon, his presence will be a huge boost for promotion chasing Brentford, who are undoubtedly a better team with him in it. His long awaited return might just be the catalyst the Bees need to propel themselves towards the Premier League.