Sensational Said Benrahma lighting up the Championship with Brentford 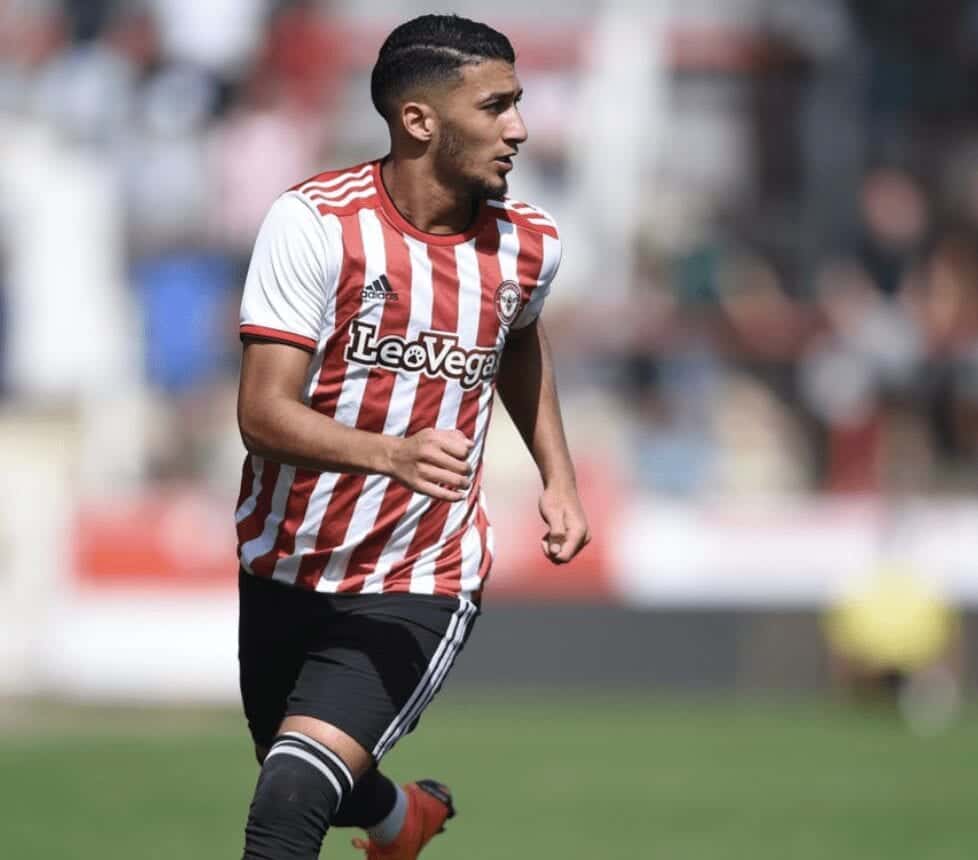 As part of one of the most exciting and entertaining attacking units in the Championship, Said Benrahma’s form in 2019 has been a massive highlight for Brentford.

Alongside Ollie Watkins and Neal Maupay, the Algerian wizard has really stamped his mark, registering five assists and seven goals in his last eight league matches, which has brought the trio’s combined total to 37 goals 24 assists for the season.

Oozing confidence and enthusiasm, the dynamic attacker’s always intent on driving his team forward to unlock defences with his mesmerising technical qualities. A marvelous dribbler, Benrahma’s a real handful for any opposition, with his close control, razor sharp turning circle, vast array of tricks, feints, shimmies and stepovers ensuring he’s an unpredictable and dangerous proposition. 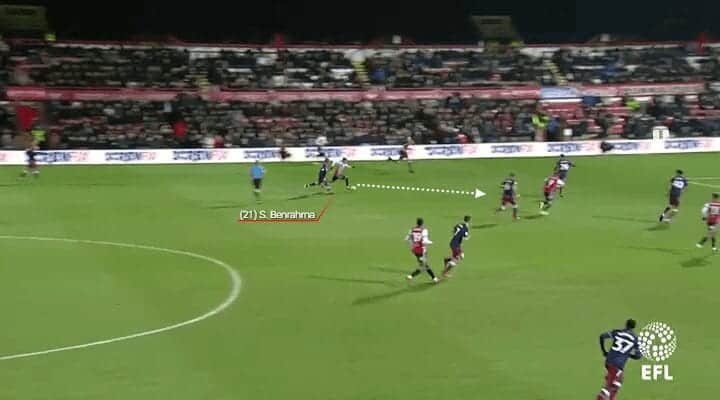 Extremely strong and possessing a low centre of gravity, the 23-year-old holds his own in physical battles, as he rides challenges admirably to remain on his feet to cope with heavy harrying.

Upon parlaying the above with his wicked changes of pace and direction, and the explosive, beautifully balanced Benrahma’s aptitude in this regard is unquestionably a huge asset for the Bees, both in his team’s slower more methodical build up or in transition, where he particularly relishes marauding upfield against retreating, unset defences. 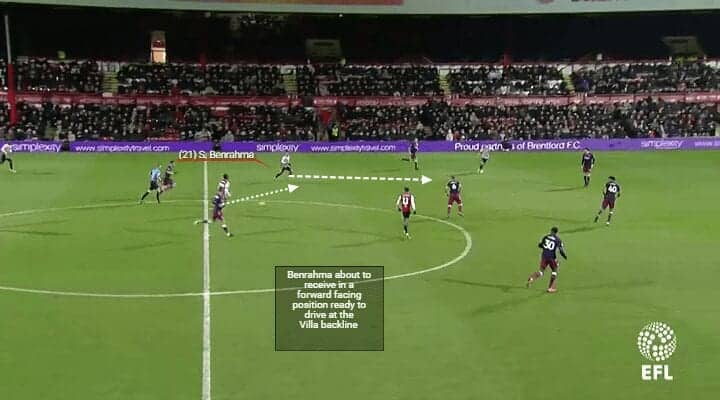 One vital byproduct associated with his ball handling prowess comes from the fact he regularly draws one, two or three trackers towards him, which importantly opens passing lanes and frees up teammates while also disrupting stopping structures.

Although he can get himself into trouble by biting off more than he can chew on occasion, a testament to his effectives comes from the numbers that state he’s completed the second most dribbles in the league (118) despite only starting 21 of the 30 matches he’s featured in.

The words of former Brentford player, Sam Saunders, gave an insight into what a sublime dribbler he is, with Saunders noting: “I trained with him and I know it’s a big shout but he is a little bit like Lionel Messi in the way he can run with the ball with pace,” he told EFL Matters.

“It just doesn’t leave his foot, it’s like it’s velcroed on. He’s been involved in 12 goals this year, which says a lot about his confidence and the way he’s playing.”

Granted a reasonable amount of freedom to exploit unoccupied spaces by manager, Thomas Frank, his smart variations in movement constantly generate headaches for his adversaries, for he’s frequently altering their reference points. Whether performing clean rotations, hugging the touchline, positioning himself in the half spaces or finding openings in between the lines, his spatial understanding serves his team well. Especially prominent when buzzing around centrally in the 10 spaces and out wide, where his expertise working in tight spaces and outstanding 1v1 dribbling see him destabilise backlines. 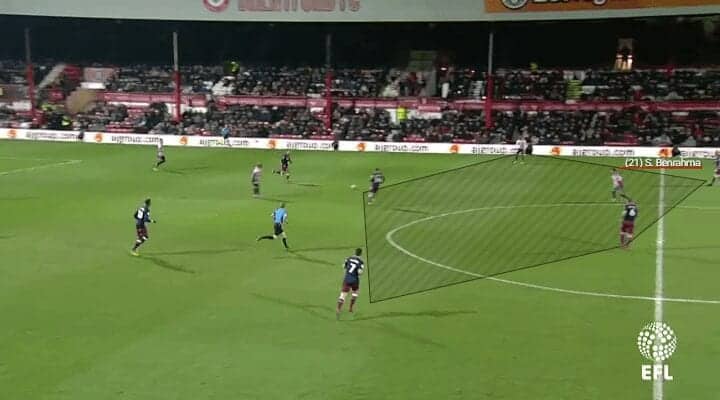 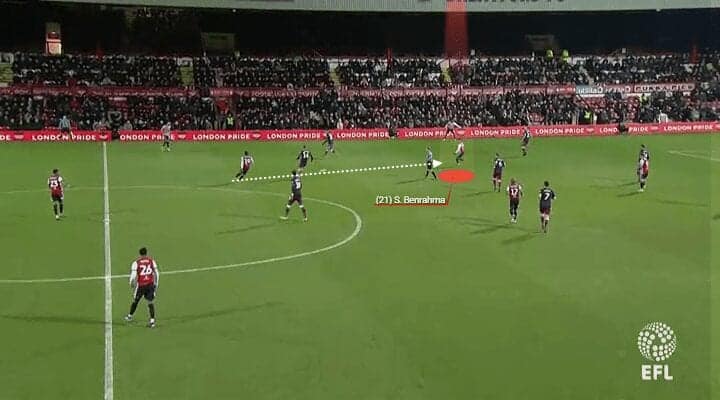 In addition, he’s shown a nice sense of timing and awareness when embarking on runs in behind, into the channels or into the box, where he angles and directs his movement intelligently to get into promising locations. 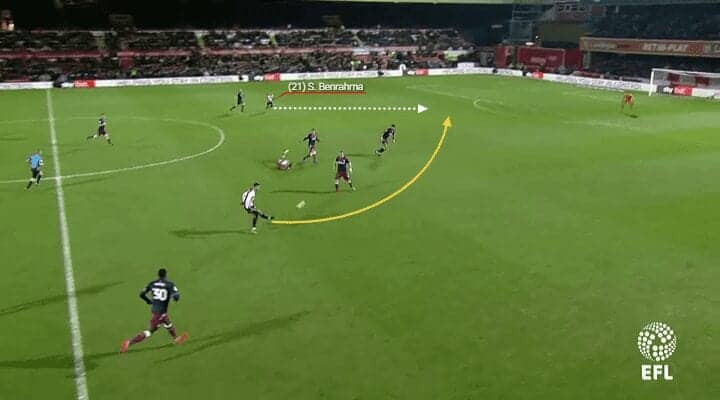 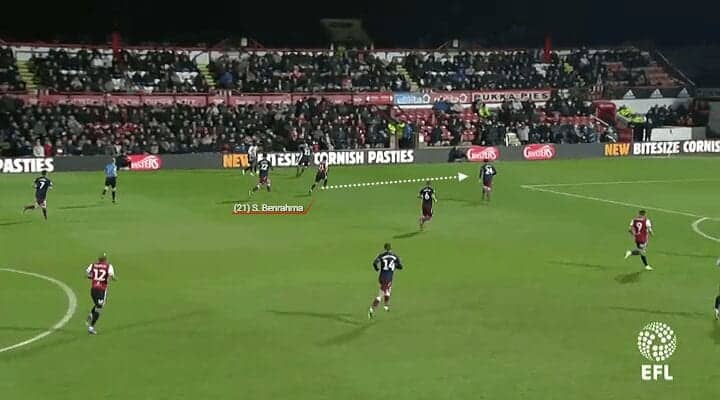 The set piece specialist’s distribution only enhances his worth, for, on top of his wickedly struck dead balls, including fizzing free kicks and corners, he’s forever on the lookout to unlock defences. Ambitious and progressive with his passing, he loves slotting his teammates through on goal or pinpointing them in ideal zones with ground or air passes.

Furthermore, his fast combination play, ability to switch the angle of attacks and play some neat flicks and first time balls duly add to his menace. Currently leading the division for assists alongside Pablo Hernandez with 11, he’s certainly a chance supplying machine.

Having been benched by Frank earlier in the season after a tough start to the campaign, it’s been great to see Benrahma react so admirably to this setback. Indeed, his Danish tactician recently touched on this after the 2-0 win at Millwall, saying: “He was a handful. They doubled up, tripled up and they still couldn’t handle him. We kept him out on purpose to create this stronger character. But we all know his talent and he is a brilliant player.”

Despite his mixed start to life with the Bees, he recently commented on what a positive time he’s having and how vital the French speaking contingent have been for his adaptation in a recent interview with La Gazette du Fennec. He also added how enjoyable it’s been to play for a team who give him the conditions to let his best attributes shine and who play such offensively geared football.

Now fully firing, well adjusted to the environment and finding his best form, the gifted former OGC Nice speedster will be keen to keep up his tremendous form to propel Brentford as high up the table as possible.

A player with plenty of scope for development and who has a keen desire to improve, tracking the wildly talented Benrahma’s progress will be intriguing, as he’s quite possibly the form player in the Championship right now.

To follow in the footsteps of Said Benrahma attend one of our 2020 Pro and Semi Pro Football Club Trials.