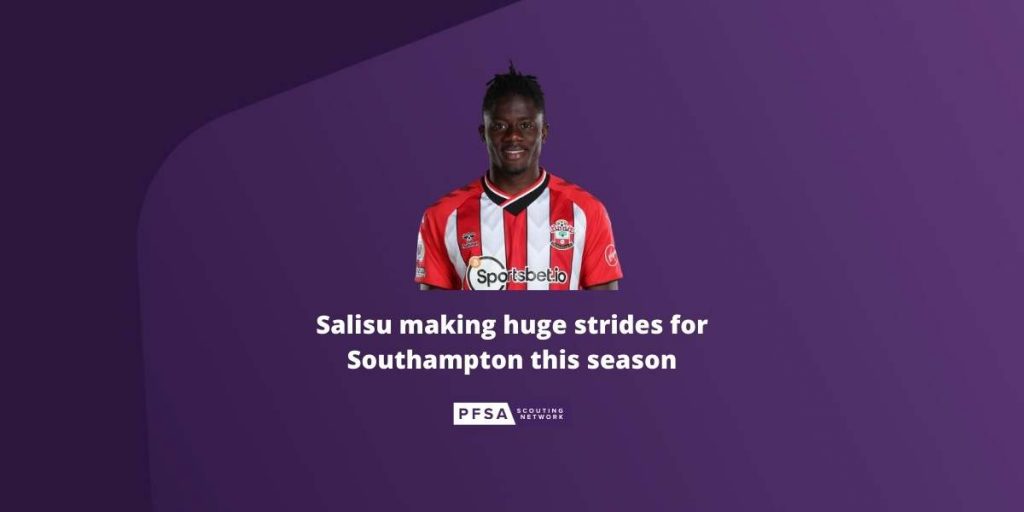 Physical, athletic and improving all the time in possession, the form of Southampton central defender Mohammed Salisu has been a huge boost for Ralph Hasenhuttl’s men.

Having joined in the summer of 2020 from Real Valladolid, injuries didn’t allow him to hit the ground running last season, which meant he had to wait until February 2021 to make his Saints debut. Now fit and fully firing, the Ghanaian’s making up for lost time this campaign, however, as he’s been one of the elite defenders in the Premier League.

Playing the most minutes (1712) of any Southampton player in the league, there’s no doubting what an integral component he’s grown into throughout his 20 appearances.

Proving a formidable proposition for attackers, he’s strong in the challenge, quick across the turf and attentive to nearby threats. Aggressive to respond to cues like when his man drops deep with their back to goal, plus when they’re about to receive an underhit pass or if they’re about to inherit possession in an open body posture, he pounces smartly. 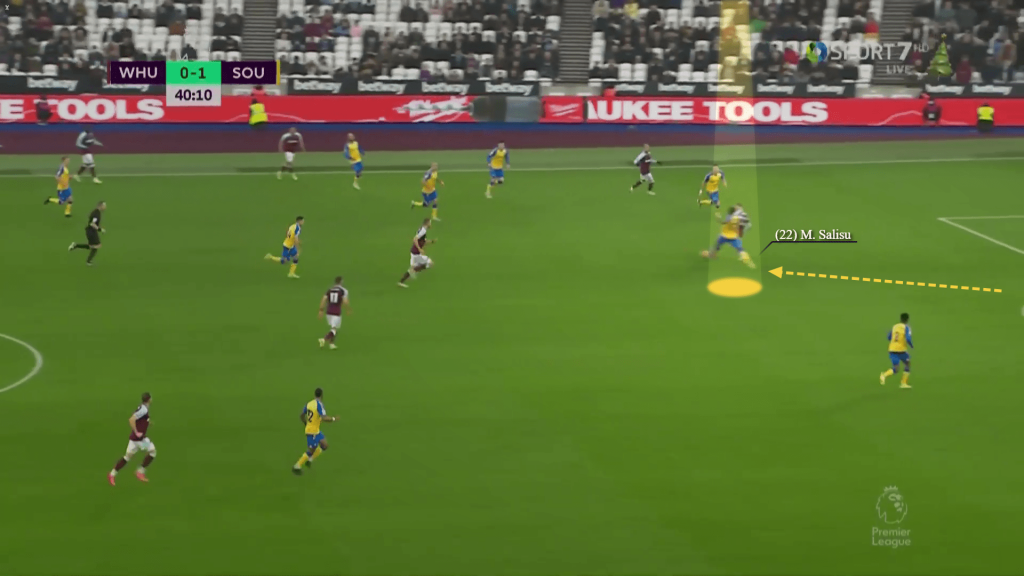 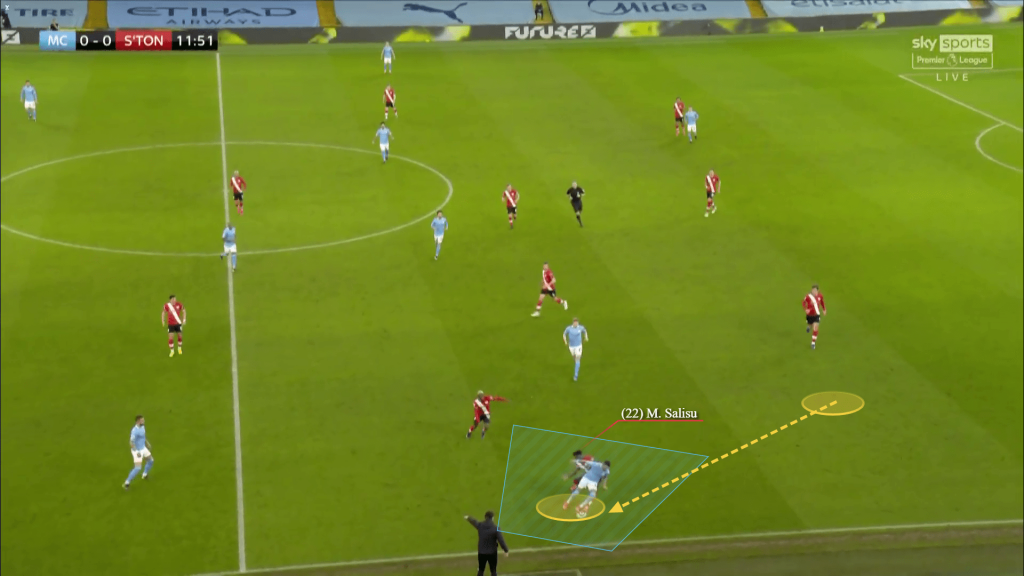 By getting touchtight so his markers can’t turn him or control cleanly, Salisu imposes himself on his adversaries impressively. In addition, his long legs and hulking frame allow him to reach in to apply interceptions and unbalance foes so they can’t execute their actions coherently. 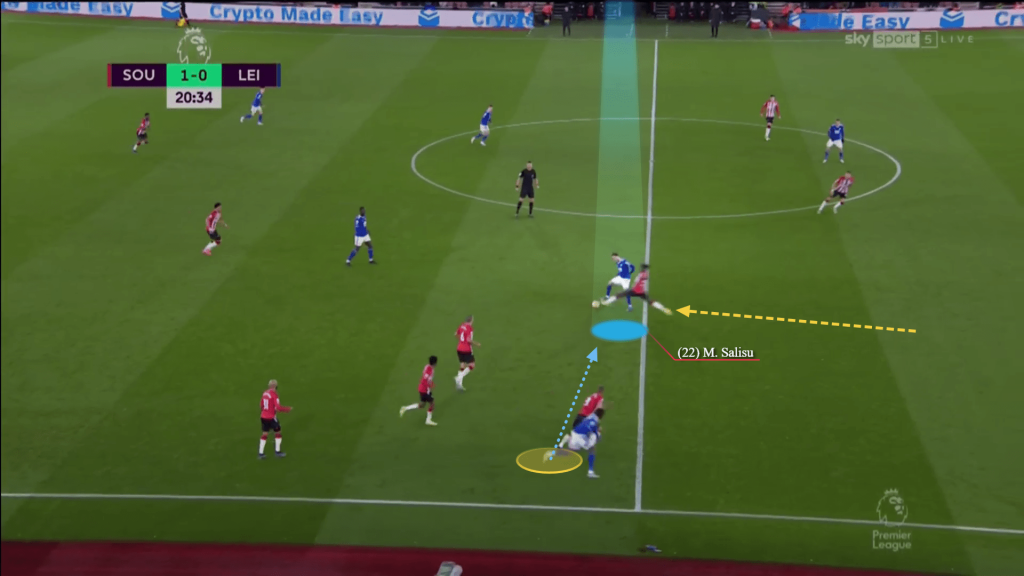 His aptitude in his duels also shines in his tackling, where he’s been very effective at timing his interventions to recover possession. Furthermore, his powerful leap, balance and reading of the ball flight ensure he handles himself manfully in aerial confrontations. 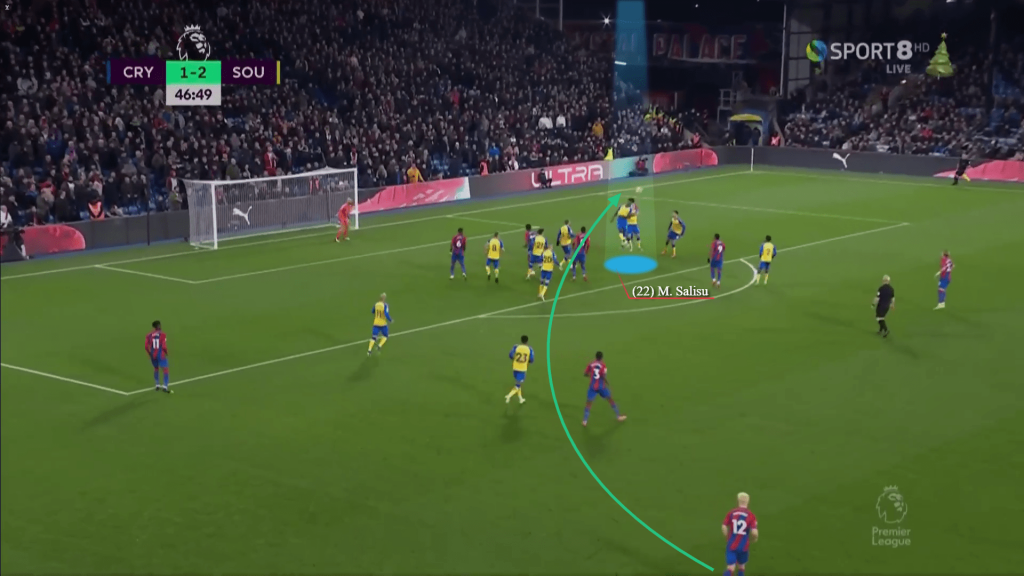 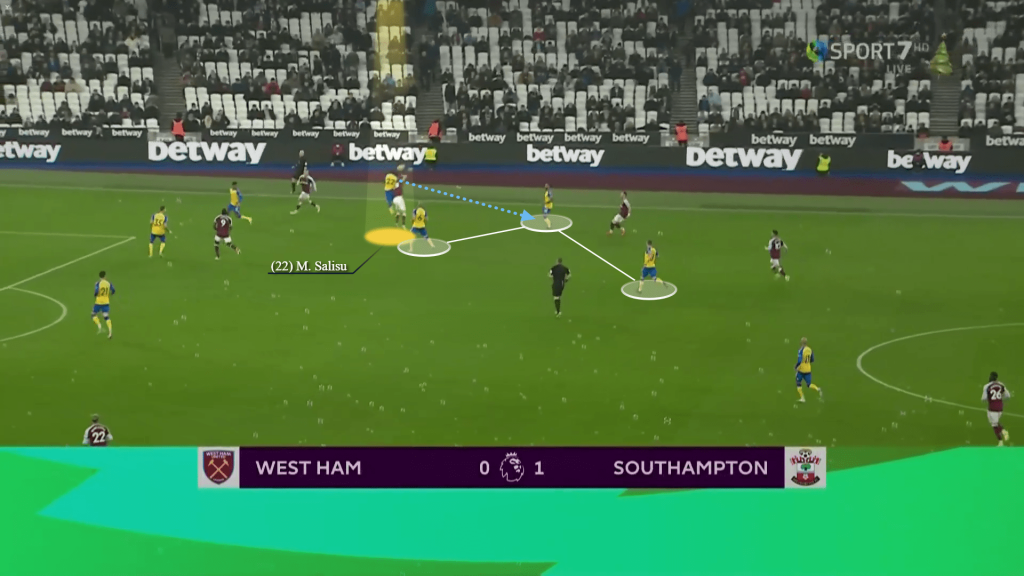 Such a tough man to get the better of in 1v1 duels due to his speed, quick reactions, powerful stance and size, the 22-year-old’s disruptive presence has been crucial in nullifying danger.

Salisu’s speed also comes in handy when he tracks runners in behind, when he needs to get back to stop counters or if a teammate needs support. Recognising threats proficiently and keen to not let his man get separation, he undertakes his assignments diligently. 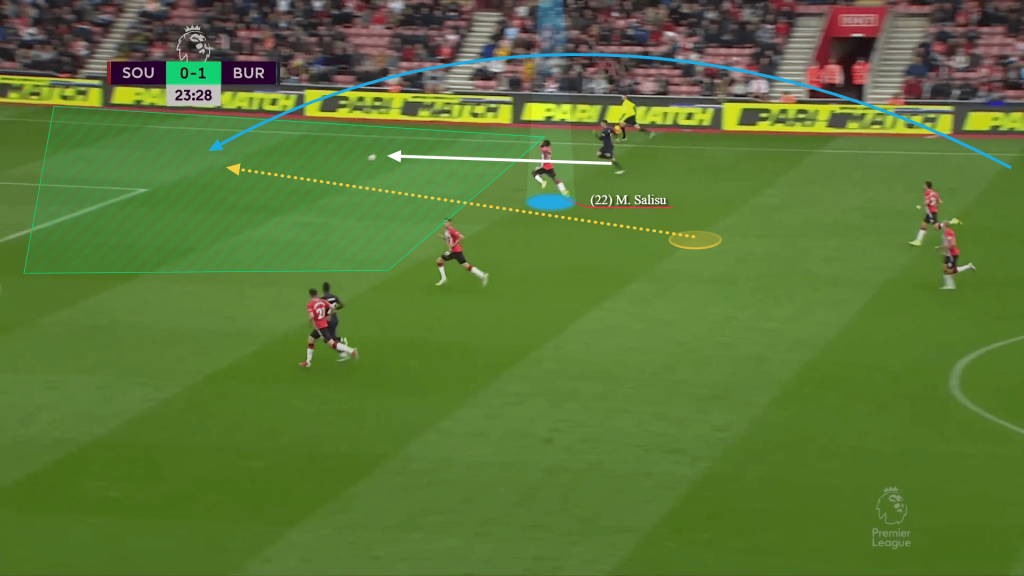 Successful in battles both on the ground and in the air, his decision making deserves mention as well, with him assessing situations clearly before choosing what course of action to take.

Leading Southampton’s defenders in terms of successful defensive actions (11.39 per 90) and defensive duels p90 (8.05), this illustrates his willingness to engage and effectiveness when doing so. Moreover, the fact he’s near the top in terms of defensive duels winning percentage (63.18%) and possession adjusted interceptions (8.21 p90) are further upsides.

A key piece of Hasenhuttl’s puzzle in possession as well, the powerful defender’s a competent passer and keen ball carrier, thus making him a solid ball progressor.

Helping pass the ball out from the back, Salisu’s calmness and confidence ensures he handles being harried pretty well. Although he commits the odd error when he goes for more expansive passes, the fact he attempts and regularly completes these riskier passes is a huge bonus.

Adept at striking raking switches of play, launching excellent through balls over the top and down the channels and hitting line breaking passes to feet, Salisu can breathe life into offensive passages brilliantly.

Furthermore, the way he recycles possession if a viable upfield option isn’t on and alters the angle of attacks has been important to manipulate defensive shapes while waiting for a weakness to arise. 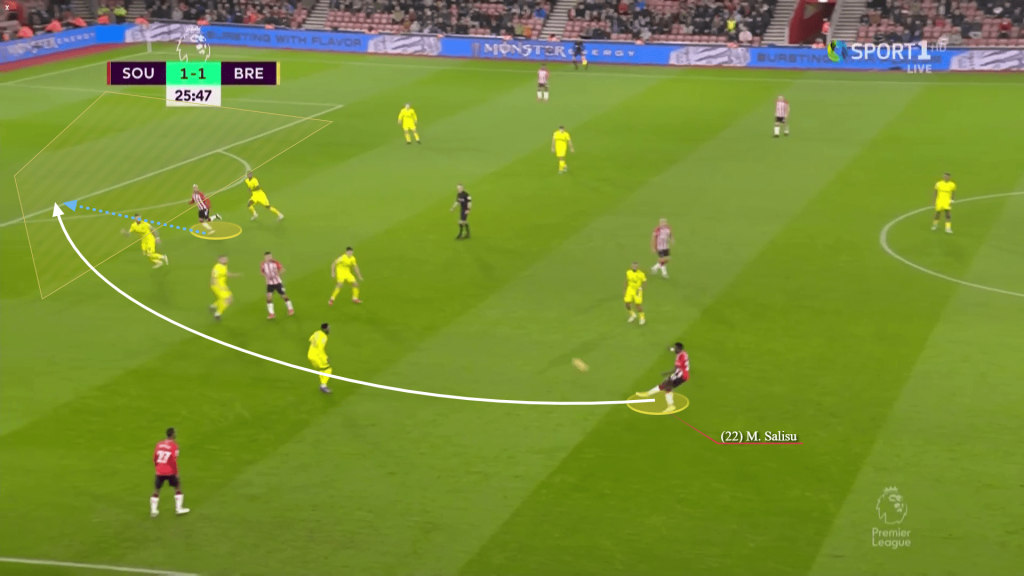 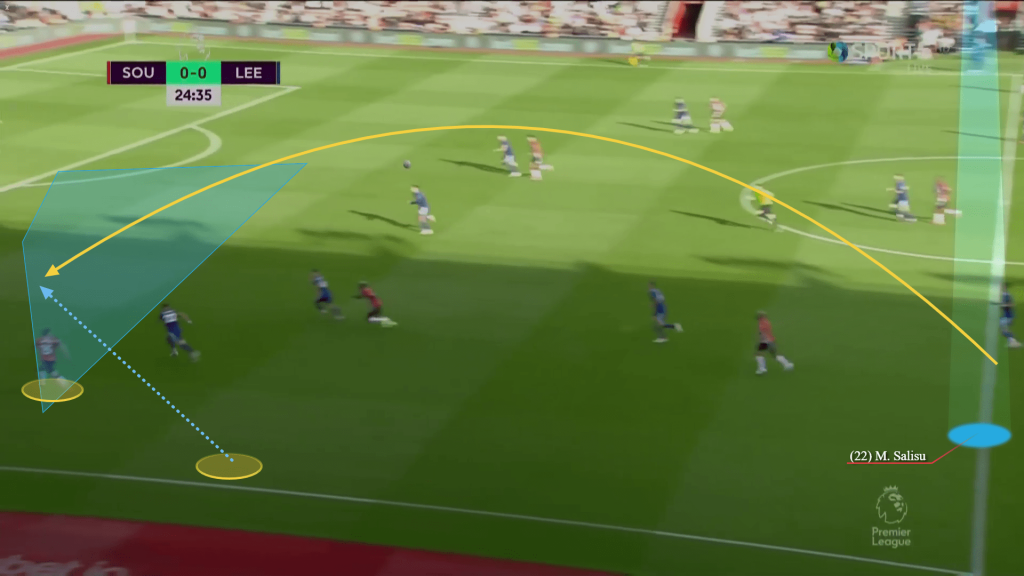 Honing his craft in this regard with every passing week, teammates have and will continue to benefit from his incision in terms of his distribution.

If the chance opens up to drive forward with the ball at his feet comes up, Salisu’s eager to take advantage of it with his slick dribbles. Gaining territory swiftly before drawing out markers or opening passing lanes, these carries definitely help create promising scenarios for the Saints. Strong on the ball, able to withstand pressure and full of pace, this has added another dimension to Saints’ ability to beat the first line of pressure and manipulate opposing structures.

Such an important figure on both sides of the ball, the way he’s grown into a dependable, well-rounded defender has been one of the highlights of Southampton’s term so far. “On the man he’s very strong. In the duels he’s very nasty because he’s on them and this is his game,” Hasenhuttl said earlier in the crusade.

“He still has to improve his game with the ball, that can be much better but we are going slowly this way. It’s not something we learn from one day to the other.”

Coming on in leaps and bounds under Hasenhuttl’s expert, tactically meticulous guidance, there’s every reason to suggest he can continue his remarkable upward trajectory as the season goes on. And in the process, become one of the premier stoppers in the division.