Romain Saiss: Why the Moroccan Maldini is such an integral member of Lage’s Wolves 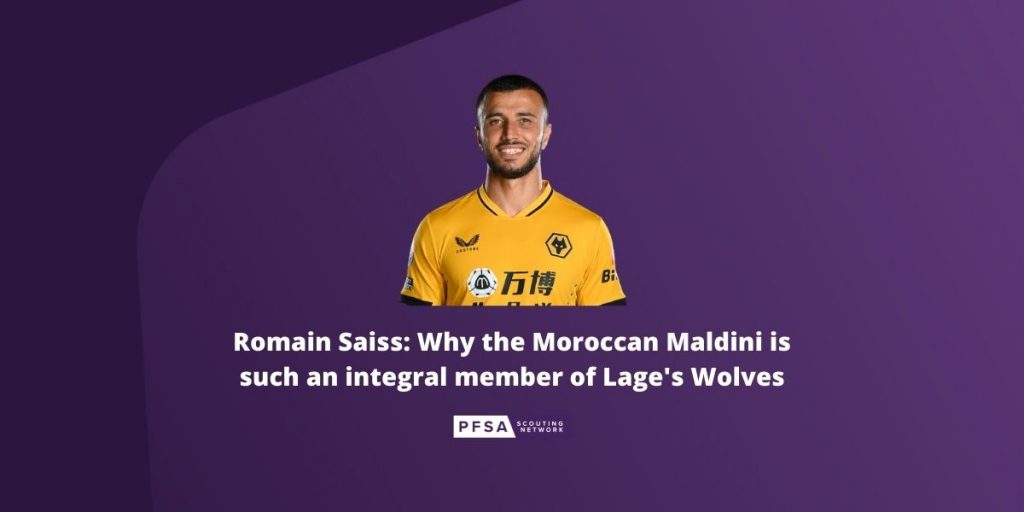 Having started 23 of 25 games for Wolverhampton Wanderers this season, Romain Saiss’ quality displays have been an integral component towards their excellent season so far.

Consistent, reliable and durable, the Moroccan international’s been a force to be reckoned with in central defence for Bruno Lage’s Champions League chasing men, who hold the equal third best defensive record in the division and sit seventh in the table.

Conceding just 20 league goals so far, this shows how successful Wolves have been at nullifying opponents, with the organisation and structure instilled by Lage paramount. Saiss, who recently returned from AFCON, which was the reason he missed two matches, believes it’s not just the defenders individually that have excelled but the group as a whole. “Hard and collective work. Not just for the defenders, but for everyone,” he explained.

“We got a good result today because we’re a united team. We work together. We attack together, and we also defend together. We’re not scoring many goals at the moment, but we must keep up with the hard work, to remain strong in defence and also try to score more goals.

“We’re ambitious and want to go up the rankings and win many more games. Now, it’s going to be a complicated week, with two away games. We must now rest and prepare for the next match.”

A fantastic leader out on the pitch, the experienced stopper sets the tone for his teammates to follow by undertaking his role with intensity and aggression. Although he can be rash in the challenge and pick up yellows at a steady rate (four so far), the positives far outweigh the negatives.

Always looking to physically impose himself on his adversaries and make life as difficult as possible for them, he never gives an inch. Pressing with gusto and full of conviction once he decides to step out, he’s proven what an effective ball winner he is.

Wanting to get touchtight when opponents drop deep or run in behind so they can’t easily gain separation or execute their actions coherently if they inherit possession, his awareness, reaction times and scanning have helped him be awake to nearby threats. Moreover, if a teammate needs support, a counter needs addressing or a runner has broken free from midfield, he’ll selflessly come to the rescue due to a combination of his decent speed and sound reading of the play. 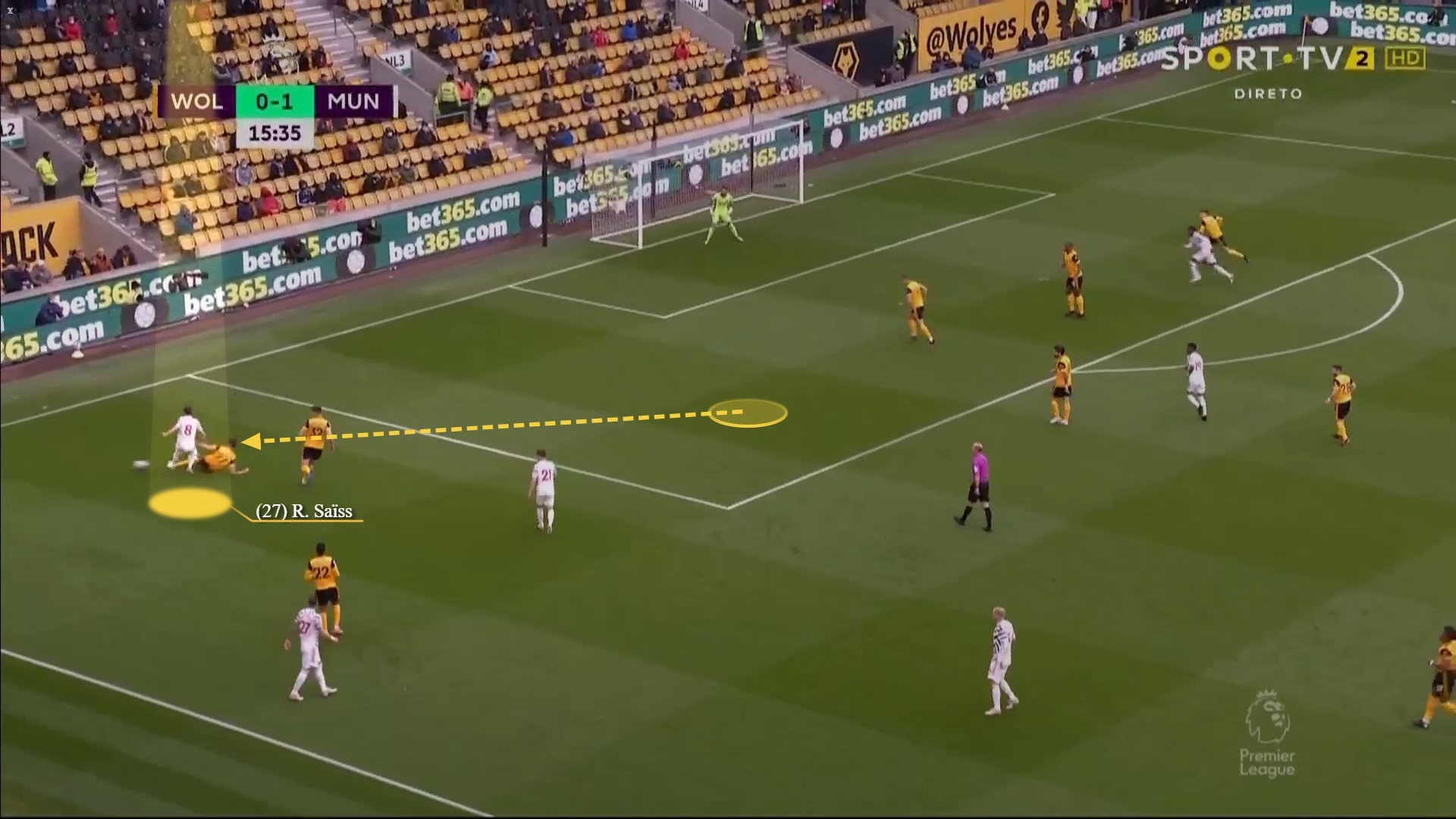 Typically positioning himself in a side-on, slightly crouched stance on the balls of his feet, this means he can quickly get on his bike to deal with danger, which is far more ideal than being flat-footed and facing forwards directly.

How he keeps his spacing and has a wonderful understanding with his defensive partners, usually Conor Coady and Max Kilman, has been crucial in terms of remaining compact to limit openings for adversaries. Stepping out, dropping back and shifting across in unison while responding swiftly to triggers when to press or track markers, it’s impressive what a cohesive unit Wolves are at the back.

Fearless and successful when it comes to aerial duels, this is another important asset of his. Picking up the ball flight quickly so he knows to adjust his position and when to time his leap, Saiss is a tough customer to beat in such instances. Strong and efficient at unbalancing foes while maintaining his balance and concentrating fiercely, he clears danger and helps his team regain second balls smartly. 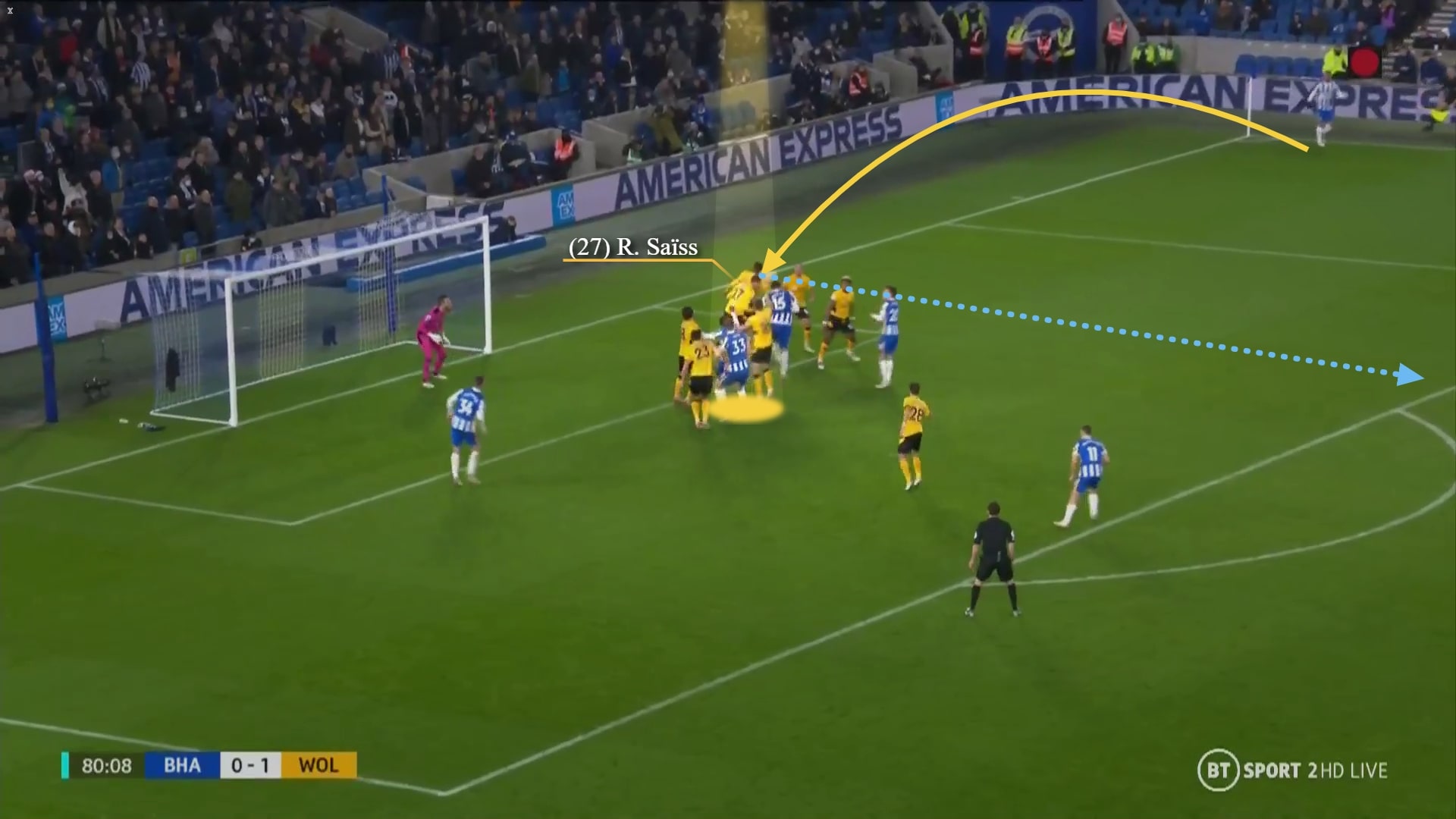 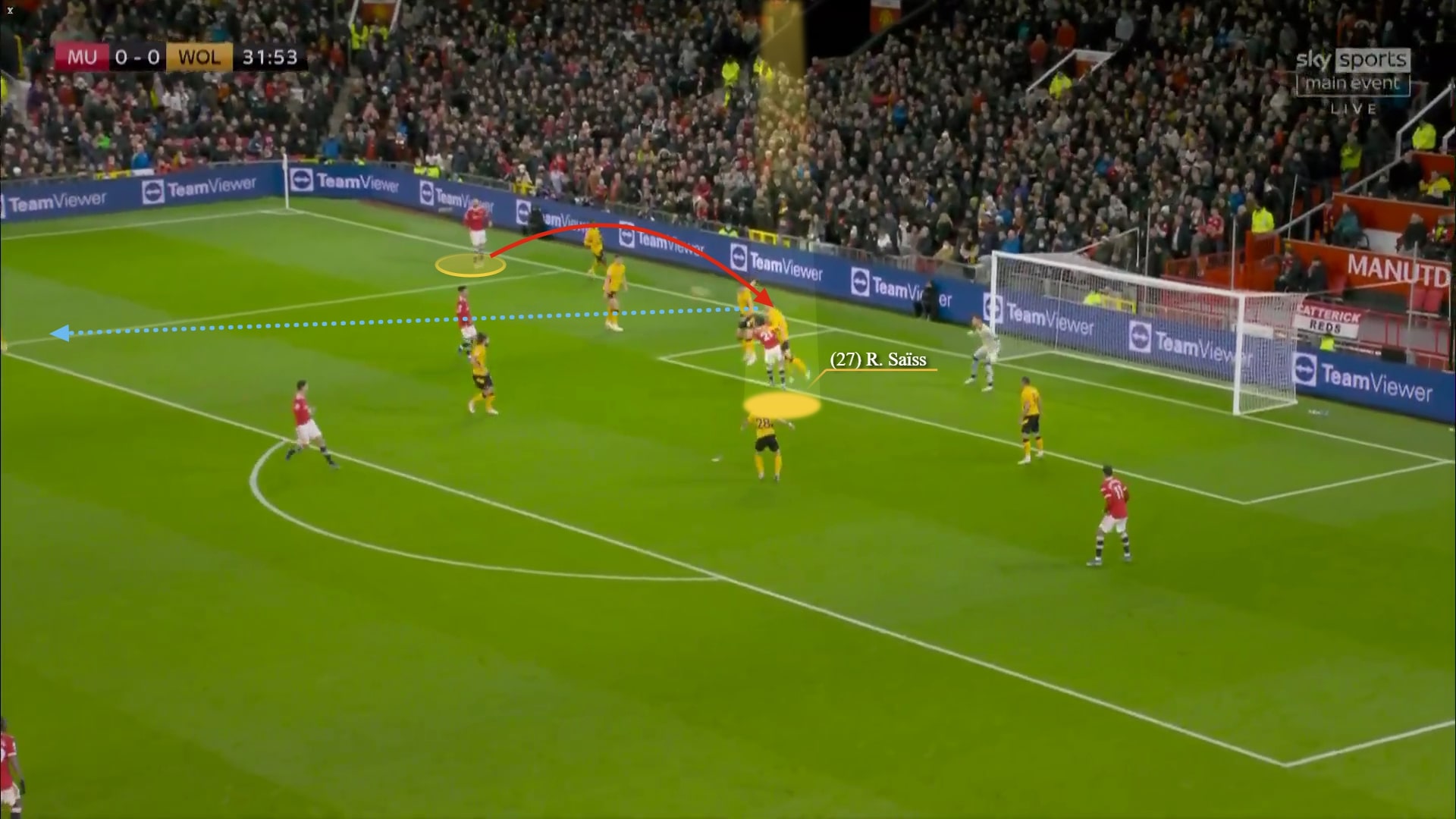 A very handy contributor when Wolves are in possession, there’s been much to admire about the former Angers man’s work in this phase. A competent passer who assesses his options smoothly, he does a good job of assisting Wolves when they’re building out from the back.

Handling being pressed well so he can remain composed to complete his passes under duress, this benefits Wolves attempts to beat the press. Boasting an incisive left foot and a top range, Saiss can strike wicked switches of play to isolate the wide men, break the lines to find dropping attackers, hit measured through balls in behind or recycle possession if the progressive option isn’t on. 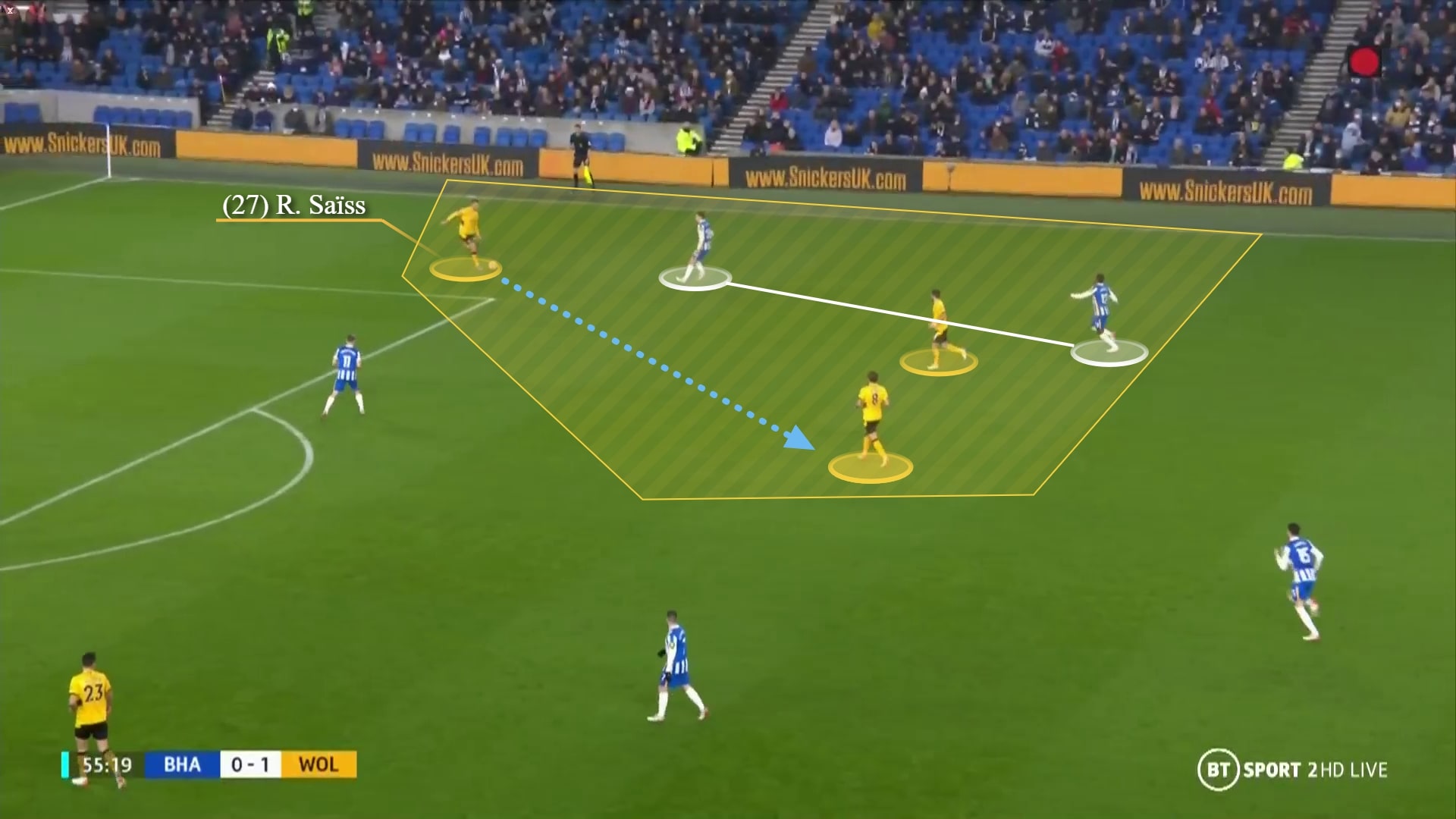 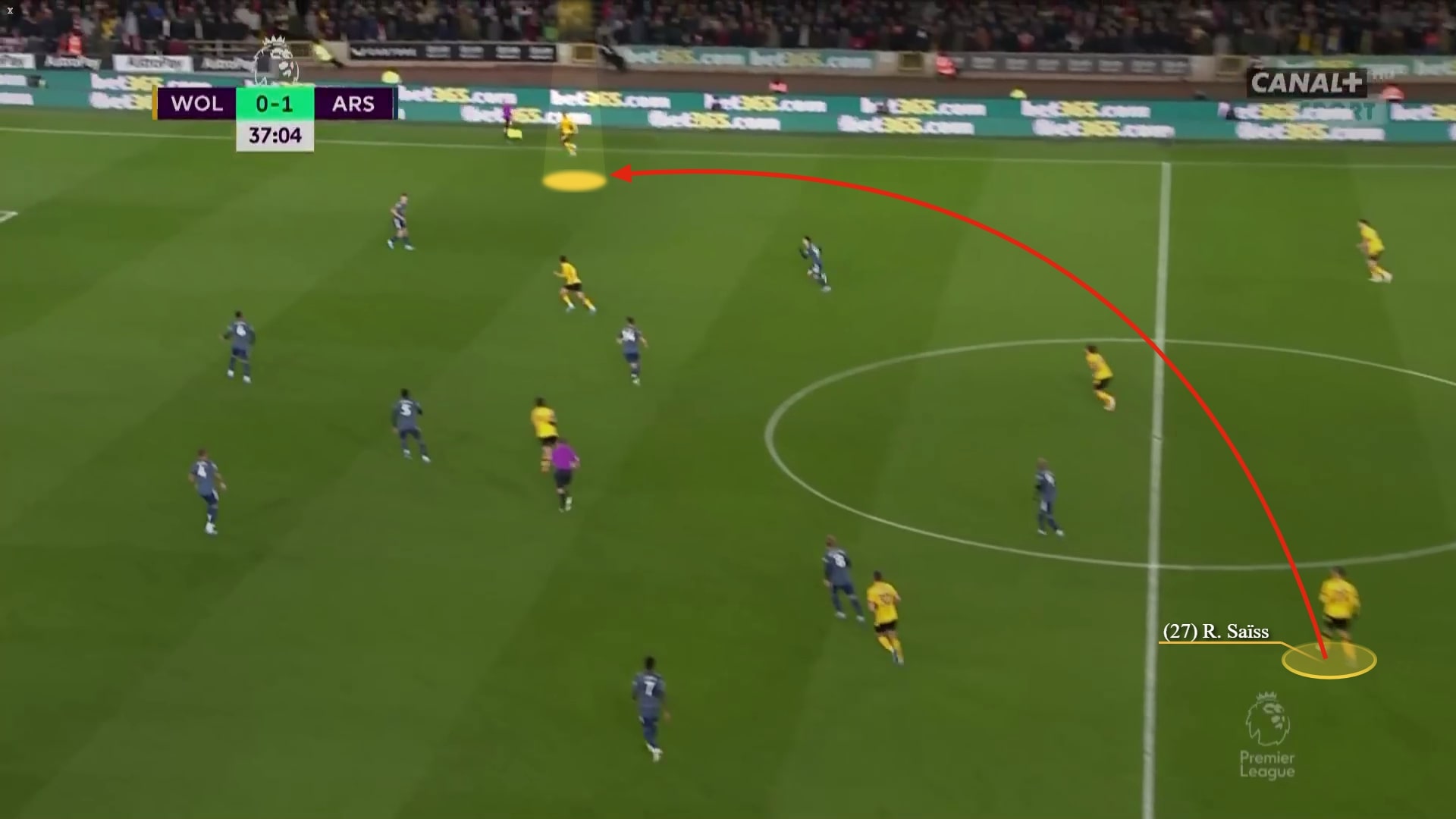 If the opportunity arises to carry the ball upfield, he’ll take it, taking advantage of the chance to not only gain territory but also to provoke an opponent towards him, which opens up the possibility of creating a free man or shifting the block so a third man combination can be fulfilled. 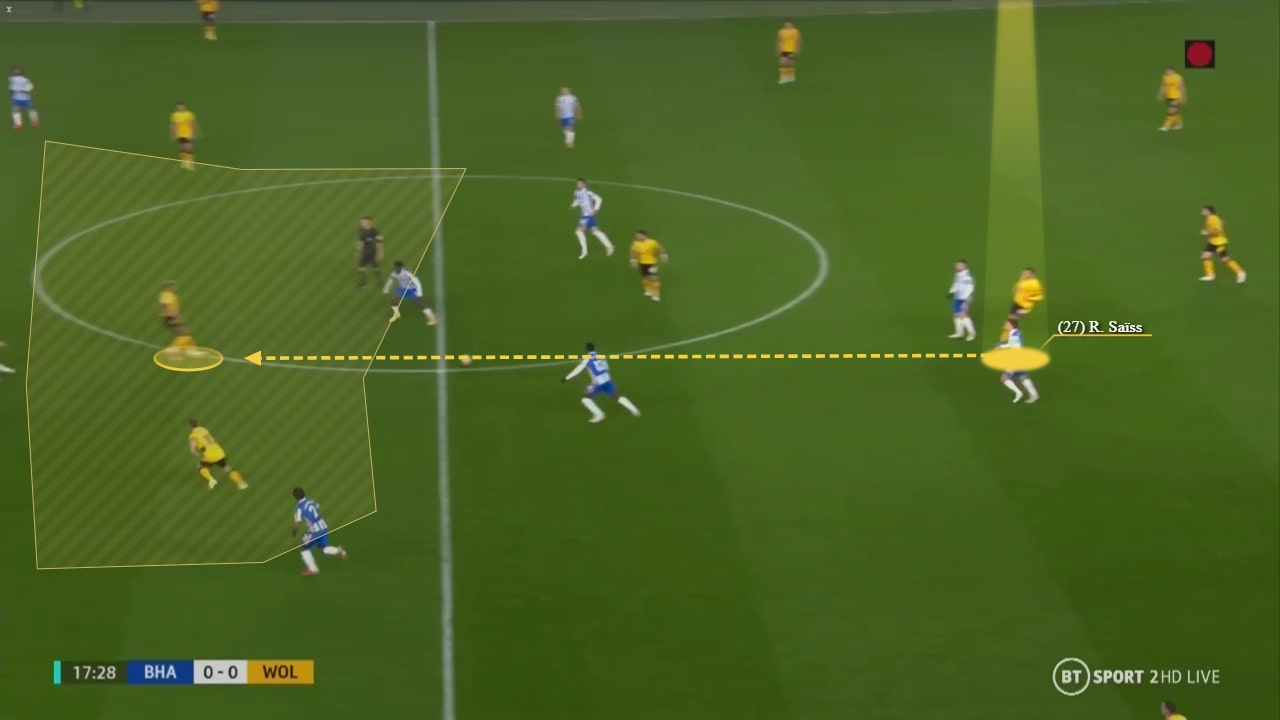 One of the most dangerous central defenders from attacking set pieces, his tremendous goal threat deserves mention. Timing his runs cleverly and so instinctive inside the box, there’s no doubting what a menacing presence he is for the likes of Joao Moutinho or Ruben Neves to aim for. Indeed, having scored 15 goals in his Wolves career to date serves as a testament to his prowess here. 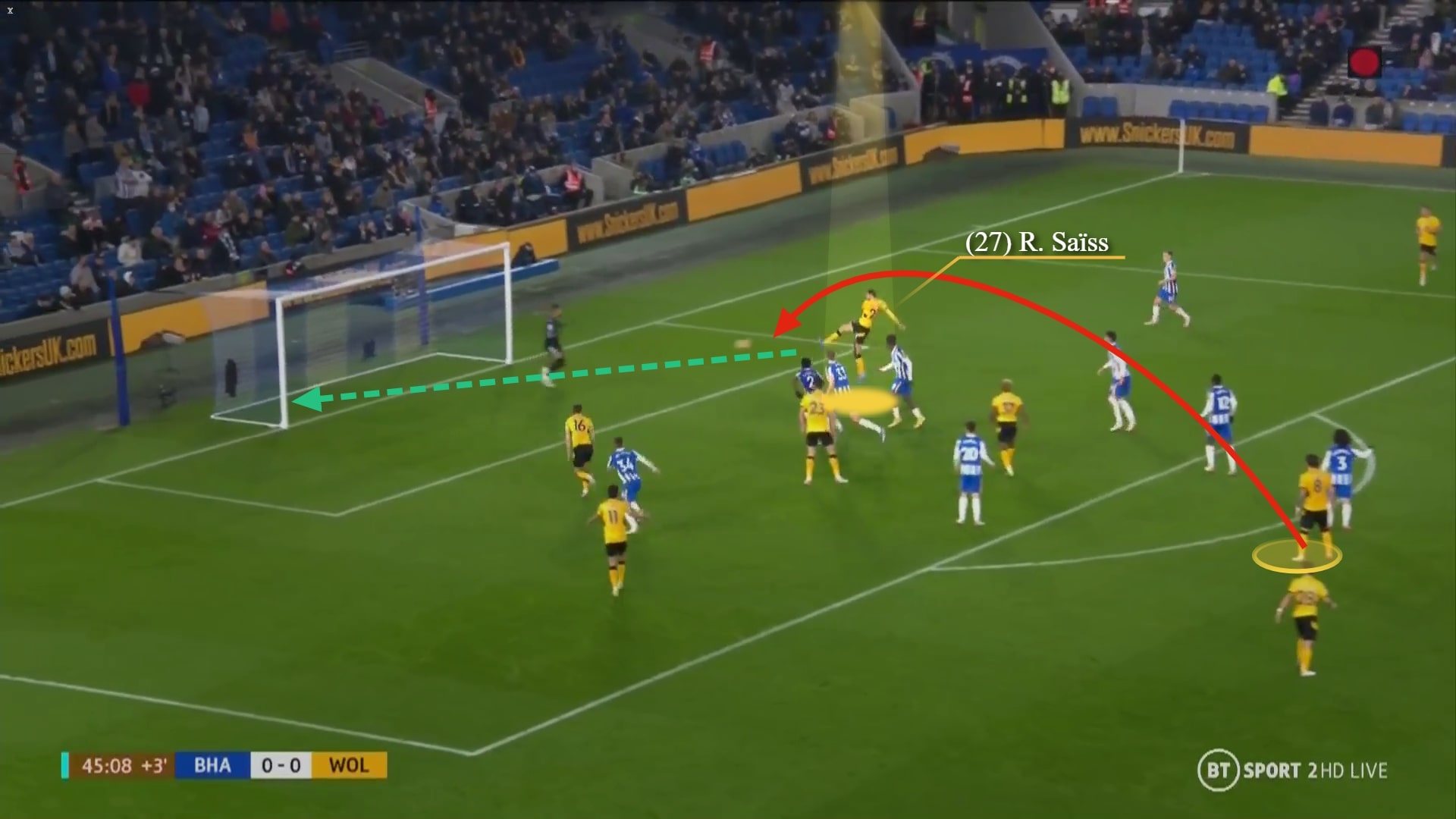 “The system really suits him, playing in a three when you’re a good ball playing defender. It gives him the space and time. He’s been a tower of strength for them,” explained Danny Murphy on Match of the Day.

Hailed as the Moroccan Maldini by coach Lage recently, the Portuguese tactician’s comments on his left sided centre back show how highly he rates him. “Saiss has a big impact,” Lage stated.

“What I know is that we’re going to miss a very important player for us, not just for me, Saiss has been an important player for the last four or five years for the club, he’s doing very well, he’s a leader and he’s scored three goals. So, you can see the importance of Saiss for me and for my team.”

In the best form of his career, clearly happy with life at Wolves and undertaking his responsibilities on both sides of the ball with clarity, the outstanding, somewhat underrated Saiss deserves all the praise that comes his way.

While he may not be the most glamorous or elegant defender around, he’s certainly one of the most effective in the Premier League. And one of the main factors why Wolves are one of the finest defensive units not just in England but all of Europe.