Revitalised Joelinton a huge plus for Newcastle 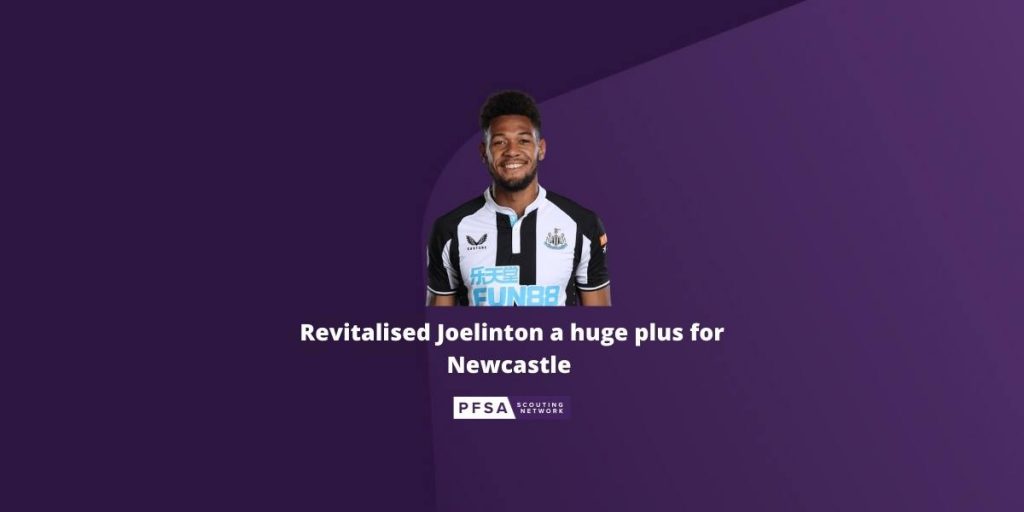 Having struggled to stamp his mark with Newcastle United since arriving for a whopping £40 million from Hoffenheim in 2019, Joelinton finally looks to have turned a corner.

With Eddie Howe arriving to replace Steve Bruce as manager, Howe clearly sees the Brazilian as a key part of his plans. Looking rejuvenated and full of confidence, Joelinton’s repaid the faith of his manager. Getting off to a perfect start by scoring on the former Bournemouth boss’ first game at the helm, he’s importantly kept up his high level thereafter too.

“He can play in different areas. He’s got a very high technical level, great work ethic, great physicality and can score goals. Put that mix together and you’ve got an outstanding individual that will only get better,” Howe gleamed.

“His very high level of technical ability suits us coming deeper into the pitch. He has adaptable qualities and a high level of tactical understanding. That’s going to serve us very well because he can do it in different positions.”

“Joelinton can be whatever he wants to be. He’s an extremely intelligent player and so adaptable. Given specific jobs and specific roles, he can carry them out. That is why managers love him.”

Whether playing as an attacking midfielder, a striker or out wide, it’s been great to see the multifaceted 25-year-old back enjoying his football and playing at a solid level. Able to hurt opponents in so many ways, his unique skill set has certainly been put to good use by Howe.

Given the platform to shine in a more offensively minded system, his movement has been one of the keys towards his recent success. Picking his moments when to drop deep or run into depth depending on the situation and position he’s operating in, he’s done a fine job of exploiting space in front of and in behind opposition defensive lines.

Boasting notable pace and alert if gaps can be charged into on the blindside of defenders, between defenders or if they’re preoccupied or ball watching, he’ll do so with direct or angled runs. His effectiveness has transferred when he ventures into the box, as he’s picked up promising areas to be a threat after reading the play soundly. 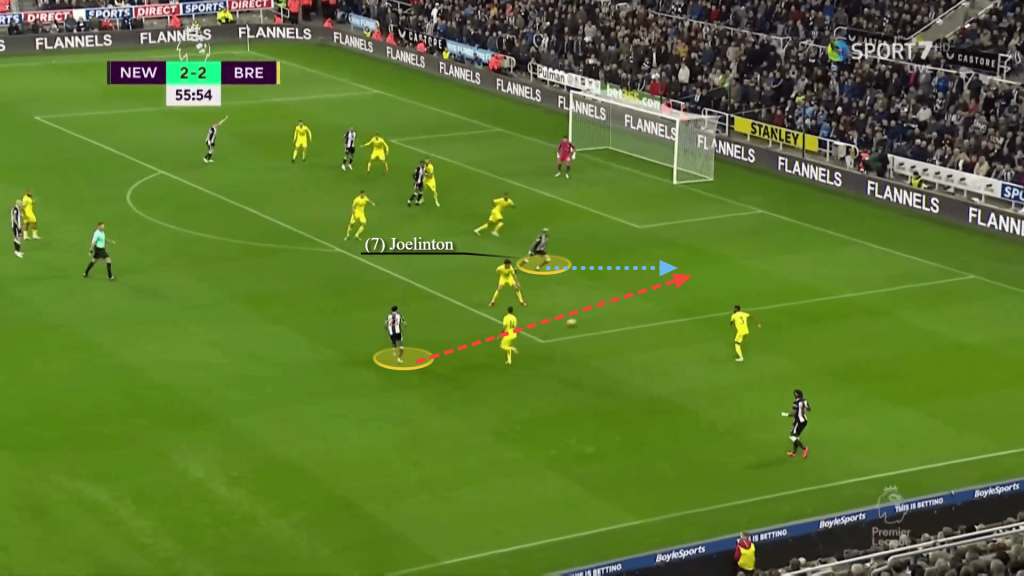 Meanwhile, Joelinton’s strength, aerial prowess and handy control see him offer an excellent outlet when dropping deep or if his team opt to go long. Useful with his back to goal and able to hold off markers while he waits for an option, he uses his frame well to withstand pressure and occupy markers before dribbling or bringing others into play. 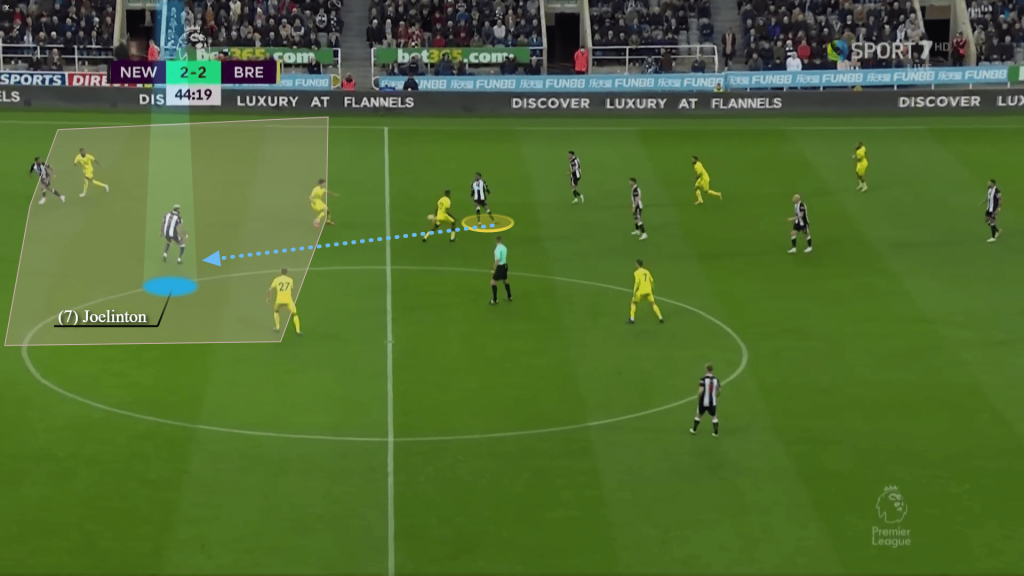 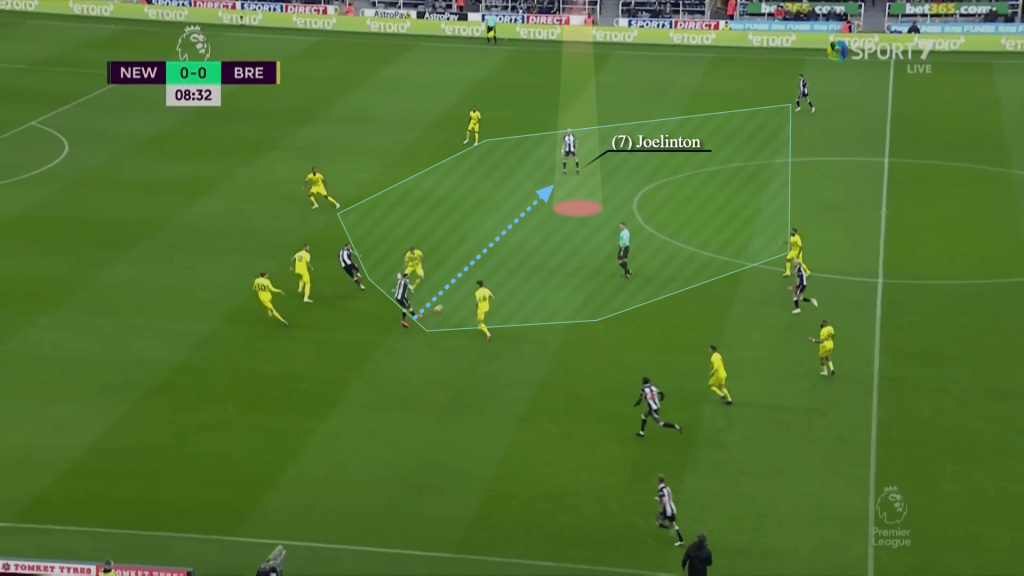 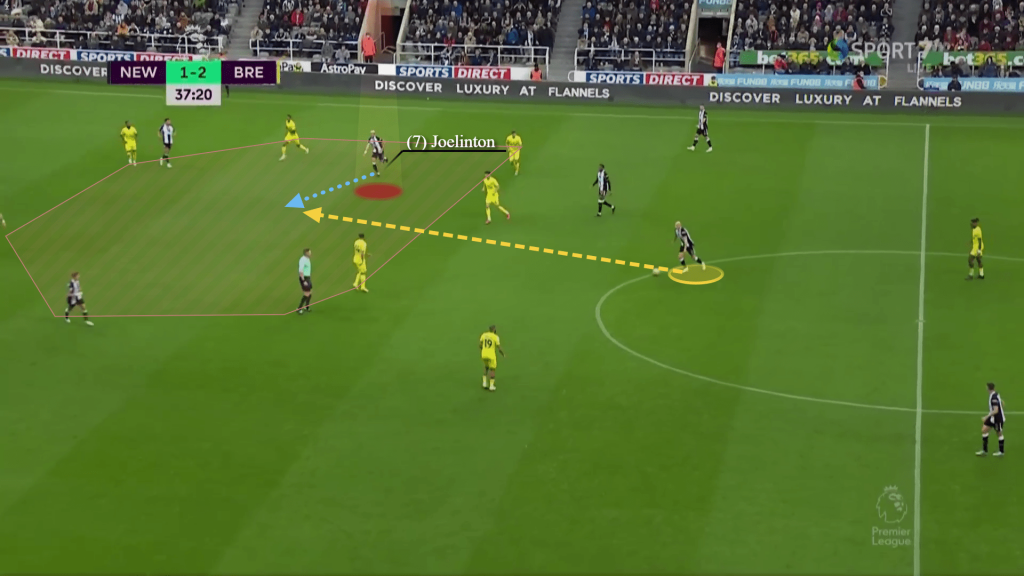 Standing a towering 186cm and possessing a top leap, this gives his team a terrific target either in the box or from long balls, where he poses a goal threat and excels at helping his team regain valuable second balls with headed knock downs or flick ons. 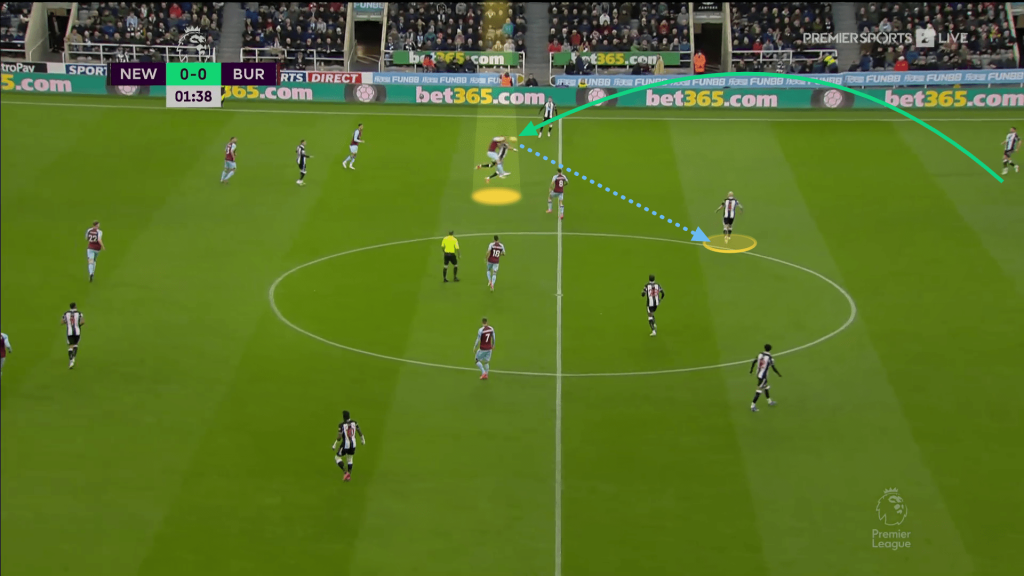 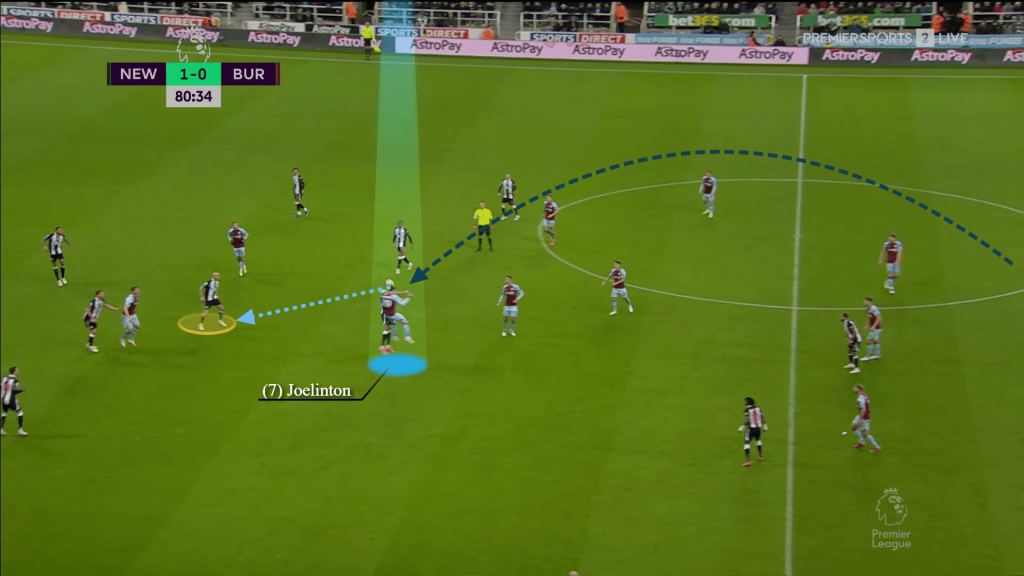 The former Hoffenheim starlet has compounded issues for opponents by rotating positions with his fellow attackers, which he did especially fruitfully against Brentford by swapping roles to pop up all over the final third. In doing so, defenders were constantly left in two minds in regards to who they should be marking, with them struggling to settle into a rhythm on how to combat this.

Switching the focus to his work in possession, and his driving dribbles, ability to beat opponents and keep the ball under pressure has been important. Able to weave away from danger and altering his receiving postures to protect possession or spin away, the man with a good first touch and control can be a tough customer to win back the ball from.

A huge danger when running into space in transition and in 1v1s, his skills and speed make him a handful for adversaries.

An adept passer who can create, progress the ball and recycle it coherently, Joelinton can breathe life into attacks and connect play proficiently. Be it hitting through balls, engaging in smart combination play, breaking the lines or firing crosses into the area, he’s got plenty to offer in this regard. 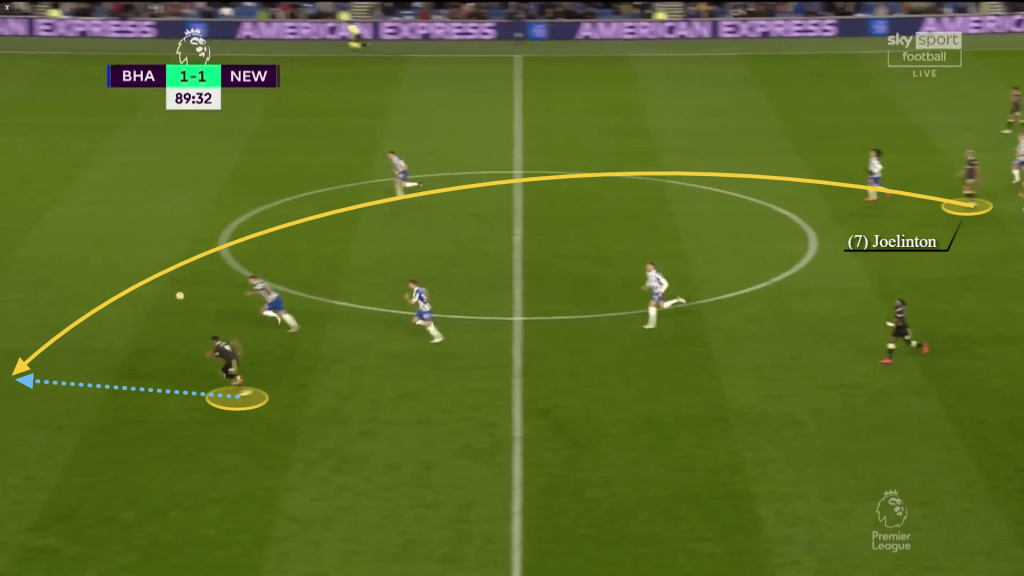 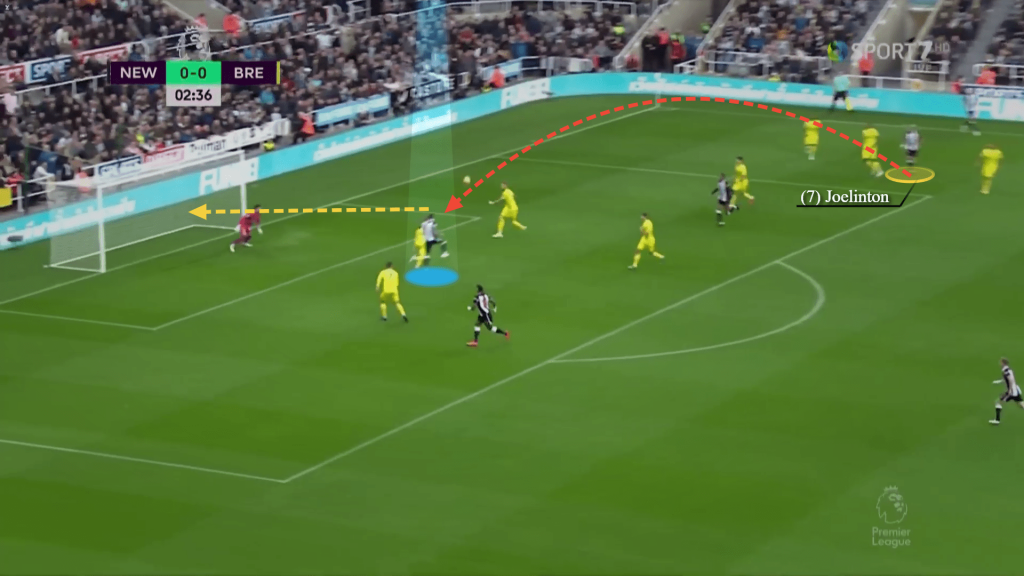 There’s no doubting the burly Brazilian suits Howe’s pressing game too, for he excels at applying pressure in an aggressive and strategic manner. Hunting the ball down while using his cover shadow to block passing lanes behind, he’s led their harrying efforts brilliantly. 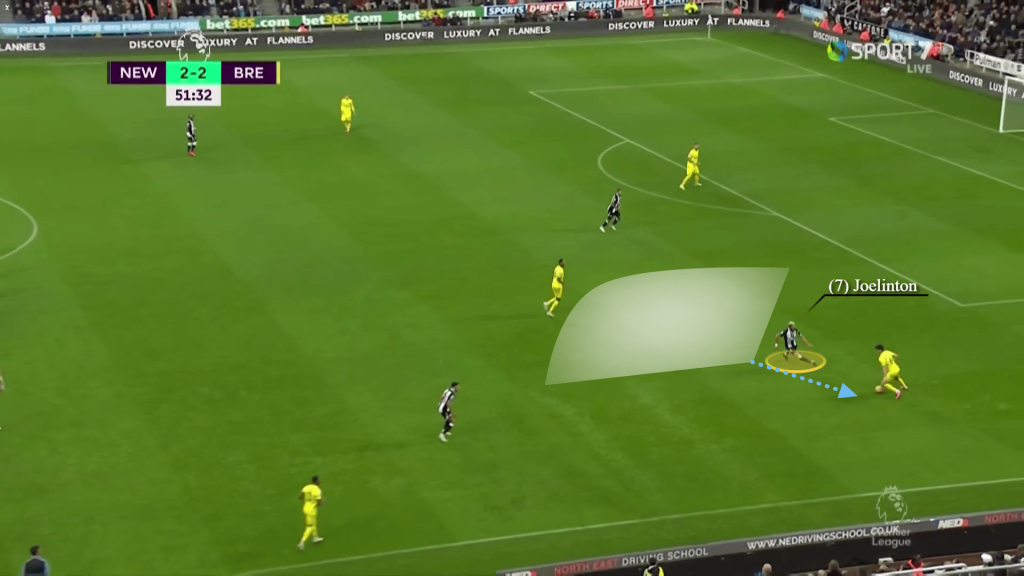 Setting the tone for his teammates to follow while ushering the ball away from dangerous central areas, Howe’s been quick to realise what a key man he is on the defensive end too.

Looking revitalized, contributing on both sides of the ball and happier operating within Howe’s offensively minded system, the early signs have been very positive indeed.

Considering how difficult things had been for him prior to Howe’s arrival, where he failed to live up to the expectations of his hefty price tag, it’s been encouraging to see him returning to a level resembling his best.

Happy and with a strong foundation to keep producing the goods, Newcastle’s hopes of survival will be given a huge boost if the tremendously talented Joelinton continues to go from strength to strength under Howe’s tutelage.