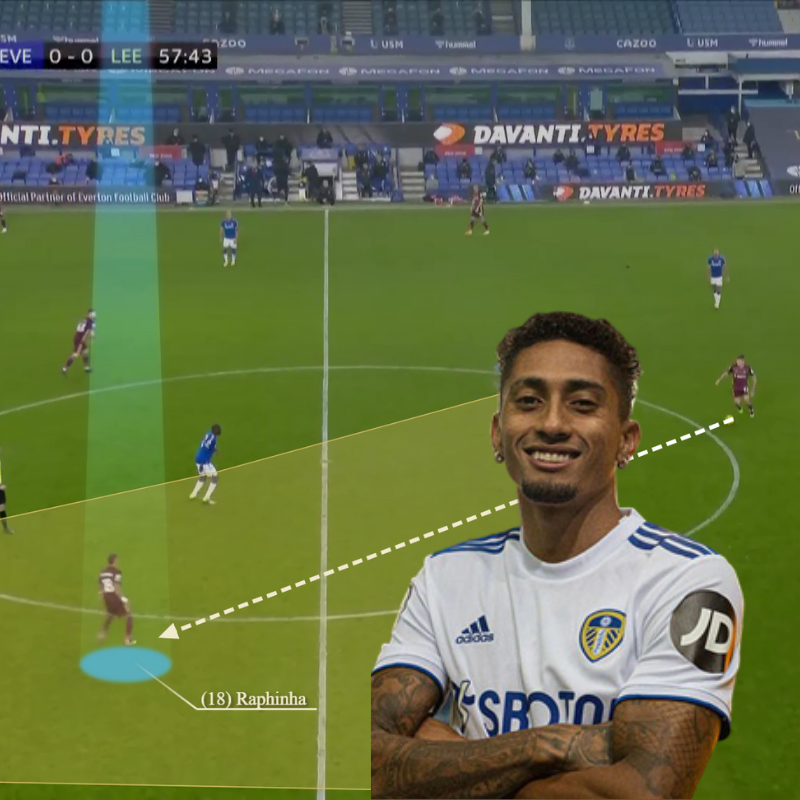 Despite making just four starts and three substitute appearances for Leeds United, Raphinha’s shown precisely why the Whites were so keen on bringing him in for £17 million from Rennes in the summer.

While 414 minutes of action is a small sample size, the signs have all been positive from the mercurial Brazilian. Especially catching the eye in his starts against Arsenal and Everton, he’s added another dimension to Leeds’ attacking plans.

Having signed in October, it was understandable he was given some time to adapt to life in England and Marcelo Bielsa’s tactically sophisticated framework. Watching him strut his stuff, there’s no doubting he’s taken on board the teachings of the legendary Argentine coach brilliantly. “He’s very good, he’s got everything,” stated teammate Kalvin Phillips.

“To come into the side shortly after being signed, he’s been excellent and I think that is down to us integrating him well into the squad and him working hard.”

Blessed with scintillating technical quality and athleticism, Raphinha has combined speed, power and finesse to outfox his opponents. Full of artistry on the dribble, the man who possesses excellent ball control and a slick first touch relishes every chance to take on markers 1v1.

Driving at his opponent with confidence and speed, trackers endure a torrid time containing him, as he can beat them in a multitude of ways. Be it using wicked feints, body swerves, stepovers, faked shots, turns and clinical alterations in pace, Raphinha’s so hard to stop. As a result, this gives his team the chance to strike free kicks from quality areas due to him winning fouls.

His moves also enable him to cut inside or create room to shoot and draw multi markers to free up teammates who subsequently become free. Unique stylistically and so unpredictable, he’s been so good at unbalancing opponents and defences in the final third, which Bielsa would be delighted with.

His technical prowess also serves him well in his passing, where he progresses the ball with directness, imagination and incision. In true Bielsa style, he loves playing quick, vertical passes to break the lines or to set off runners in behind. Showing lovely range and variations, his wand of a left foot serves him well when switching the play diagonally, hitting measured crosses and cutbacks and when combining in close quarters. 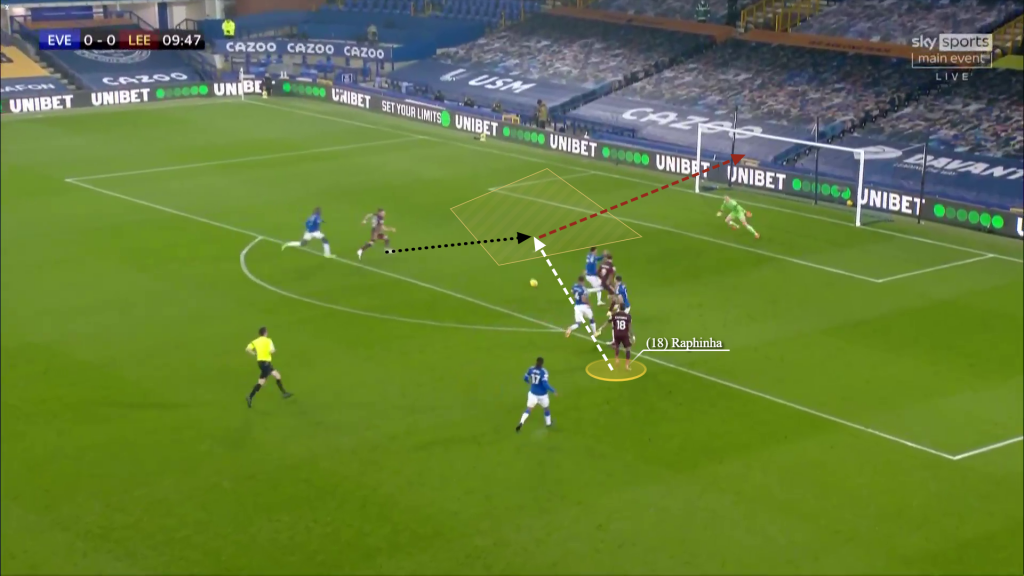 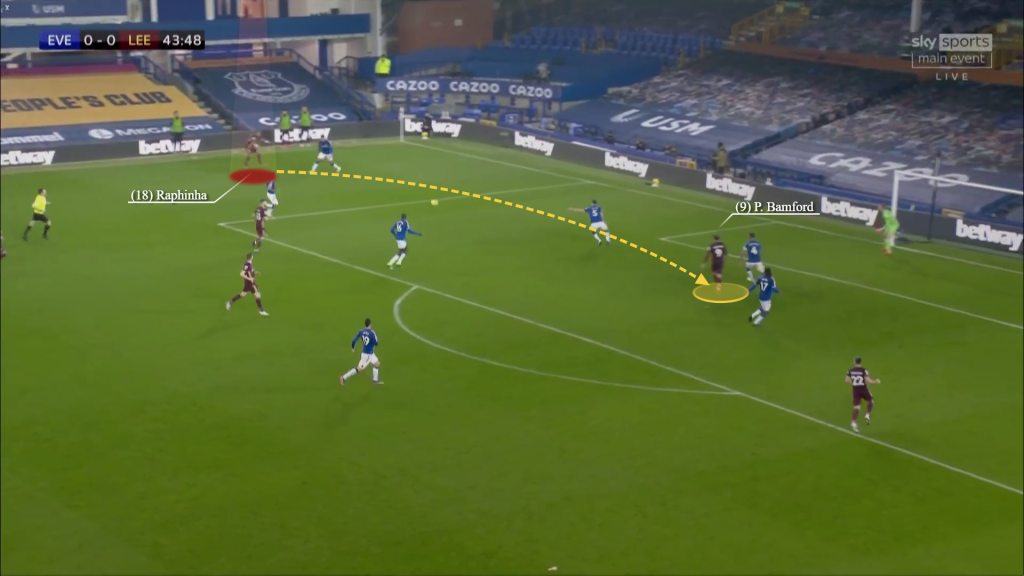 Such a clean ball striker, not only can he tailor his passes so they’re struck with power, dip, curve or loft, this also transfers into his shooting. Not afraid to back himself and launch ambitious shots, just like his goal against Everton and his time in France evidenced, this is another string to his bow. 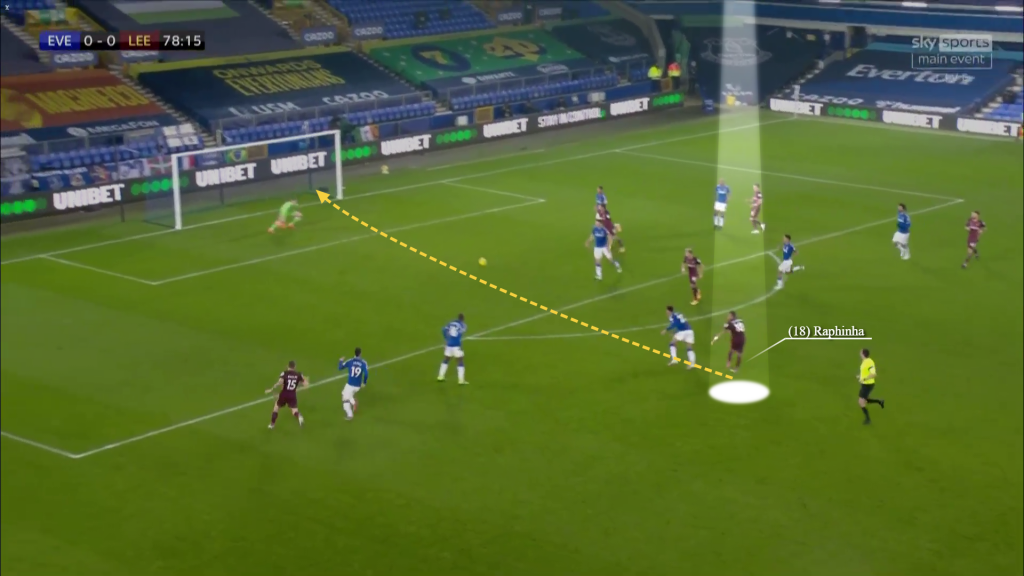 Raphinha can vitally help open defences and breathe life into moves with his movement. Parlaying power running and intelligence, he’s already fitted in nicely to Leeds’ tactical framework, which is very demanding and requires immense concentration.

Executing the desired rotations with clarity so far, it’s been admirable to see him dovetailing coherently with his colleagues. While nominally starting on the flank, it’s been common to see him switch to the opposite flank, plus into central midfield, to fullback or upfront.

The speed and timing of these interchanges has been brilliant too, which has helped disorient backlines while giving teammates quality options on the ball to exploit the manufactured spaces. 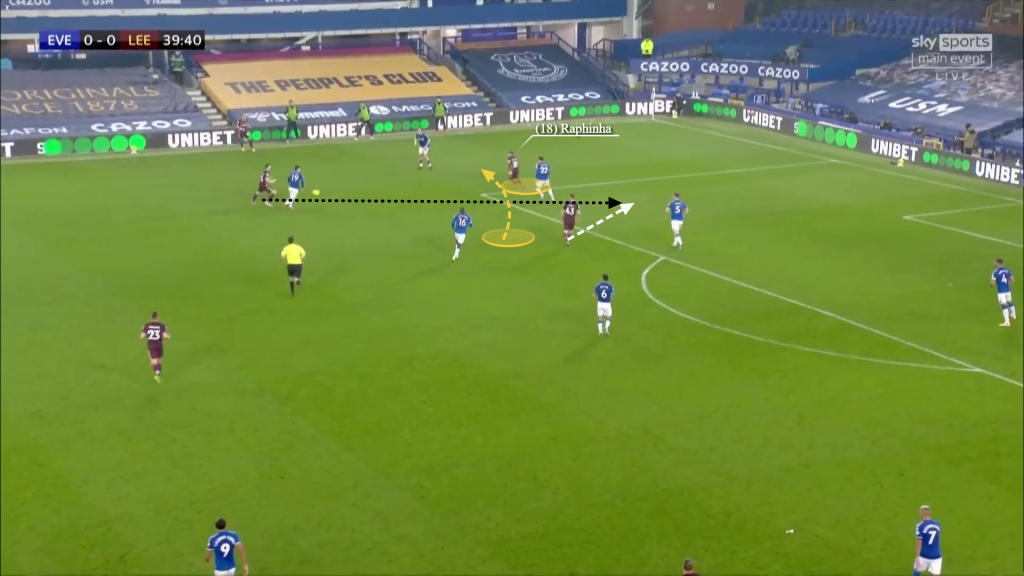 Angling and directing his runs cleverly, Raphinha’s not only shown his expertise to avoid opponents when dropping deep centrally, in the half spaces or when generating overloads, but also when running in behind. 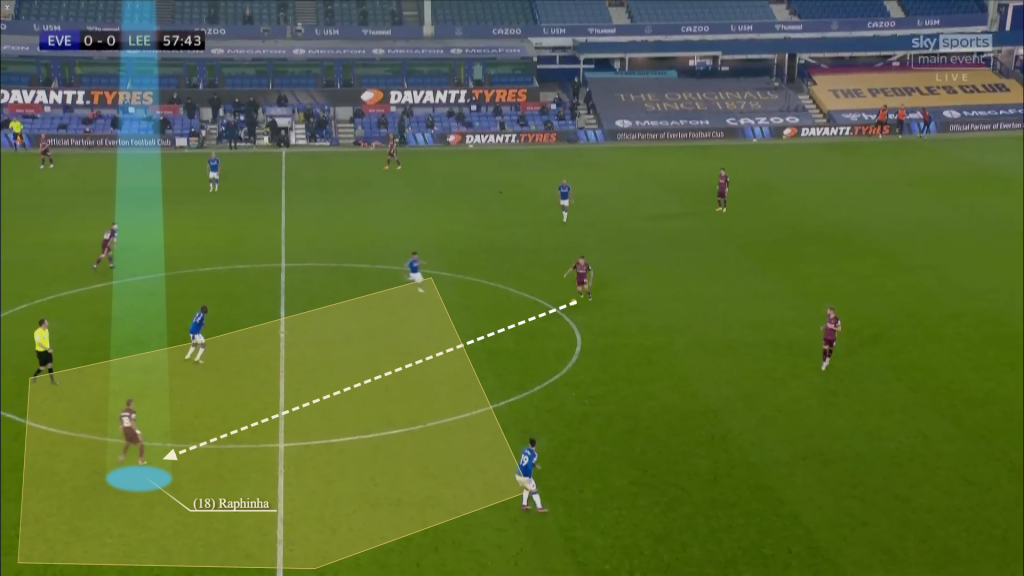 Quickly picking up openings such as gaps between defenders, when they’re ball watching or if a defender comes out to press, he’ll shrewdly make his move. This has served him ideally when embarking on runs into the box, down the channels or when starting from deeper positions. Key towards his success has been his use of blindside runs at the back post, where he uses his dynamic advantage to attack deliveries against his awkwardly positioned opponents. 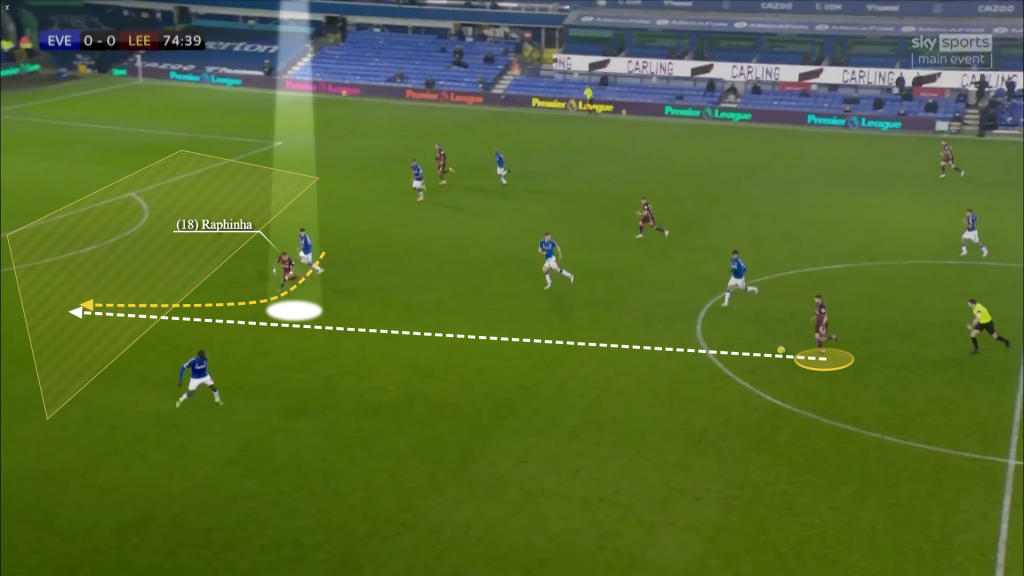 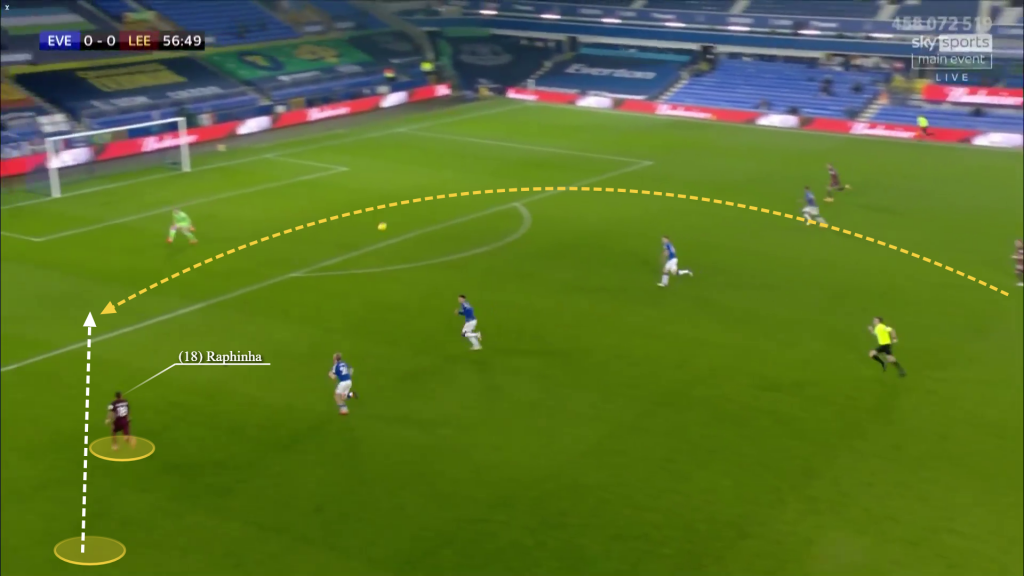 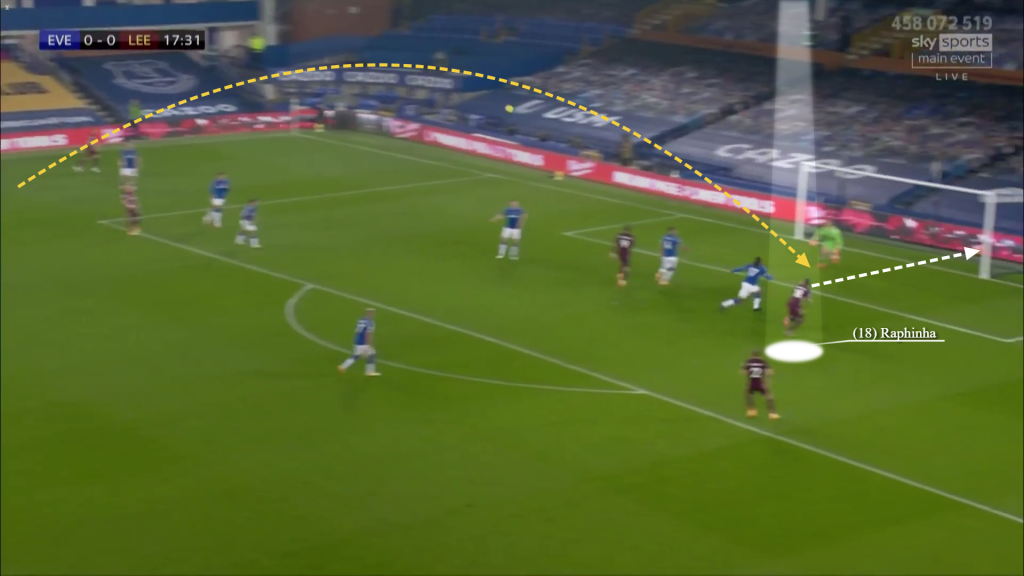 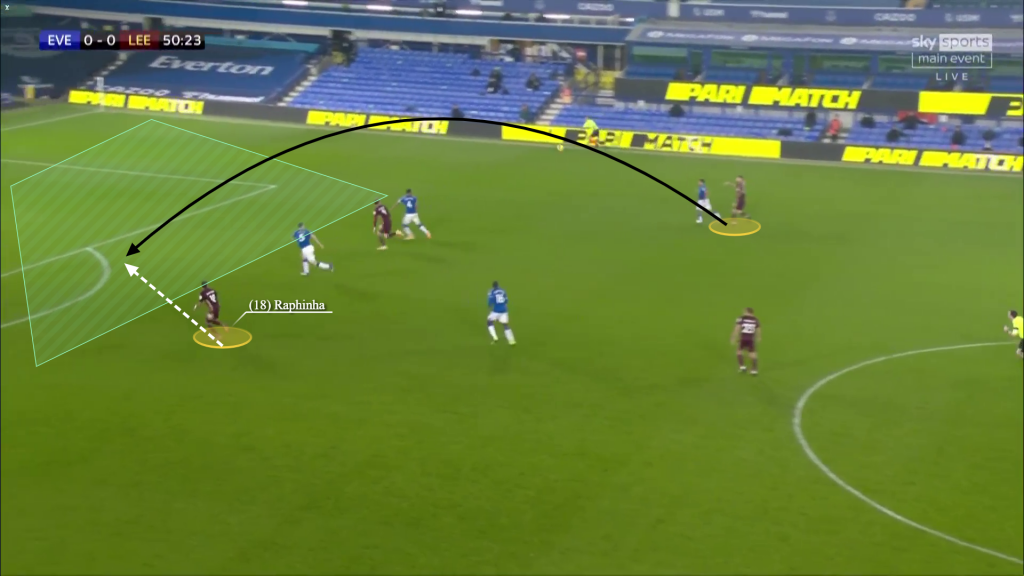 It’s also been encouraging how Leeds have found him with quick switches of play, thus allowing him to use his magical 1v1 qualities against his direct opponent.

Grasping what Bielsa demands of him rapidly, there’s every reason to suggest the multifaceted attacker will get even better as he continues to hone his knowledge of his manager’s system and integrate completely into life at his new team.

Considering how impressive he’s already been, that will be a frightening proposition for defenders all over, as Raphinha’s another testament to Leeds’ astute recruitment strategy.