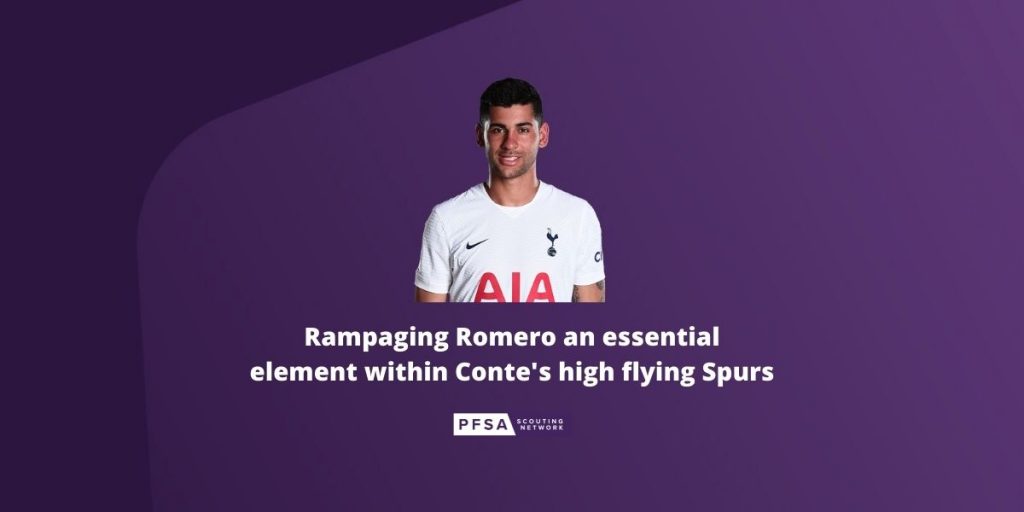 Since joining Tottenham Hotspur in a deal worth a whopping £43 million in the summer from Atalanta, which made him their second most expensive signing ever behind Tanguy Ndombele, Cristian Romero’s quickly gone about repaying the club’s faith in him.

Although he took some time settling into life with the Lilywhites, the dogged Argentine international has really come into his own of late, with him putting his injury issues behind him to establish himself as an integral component of Antonio Conte’s team. “I love life here. Right at the start, it wasn’t easy. I think when change happens in our life you always need a certain amount of time to be able to adapt and settle in,” he told The Athletic.

“First and foremost, the language is quite a basic thing and you need that to get by. But gradually I feel I’ve settled in. I’ve always had that spirit and desire and aggression. And I think if I ever lost that, I’d have a problem.”

Looking at home now on the right hand side of Conte’s back three, the man who shone brightly for Atalanta at the heart of La Dea’s backline in a similar system under Gian Piero Gasperini has undertaken his defensive duties with customary tenacity and aggression.

A huge physical presence, Romero never gives opponents an inch, always eager to get touchtight so they can’t gain separation to execute their actions or turn and face. Quick to respond to triggers like when his man drops deep with their back to goal, when a slow pass is coming towards them or if they’re in an open body posture, he pounces with gusto. Backing himself to step out to apply pressure with conviction, he’s been brilliant at breaking up attacks. 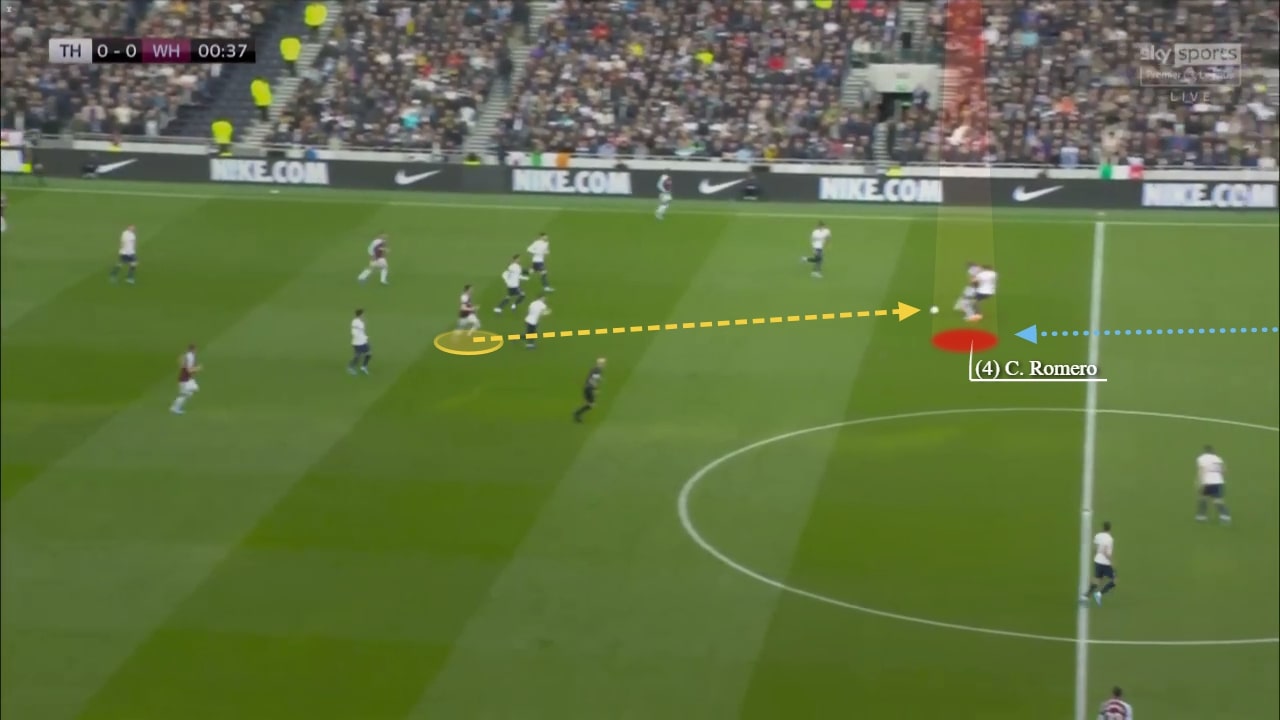 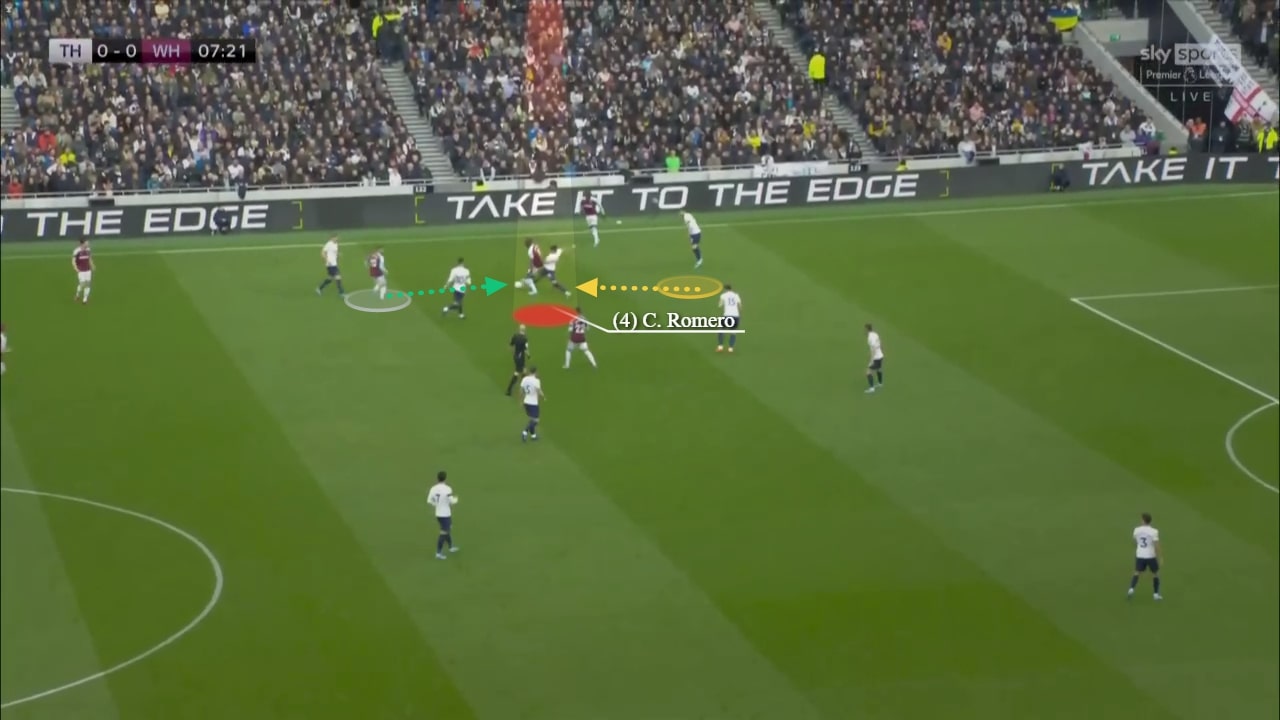 Although he has a tendency to fly in overzealously on occasion and give away fouls and earn needless yellow cards, the positives outweigh the negatives with his approach. Intimidating and imposing himself physically on his adversaries at every opportunity, he relishes duels both on the ground and in the air.

Alert to threats surrounding him due to his head scanning, this ensures he tracks runners in behind, down the channels and into the box smartly. Possessing good speed and often impeding opponents’ movement by getting an arm across them, he handles these situations well for the most part. 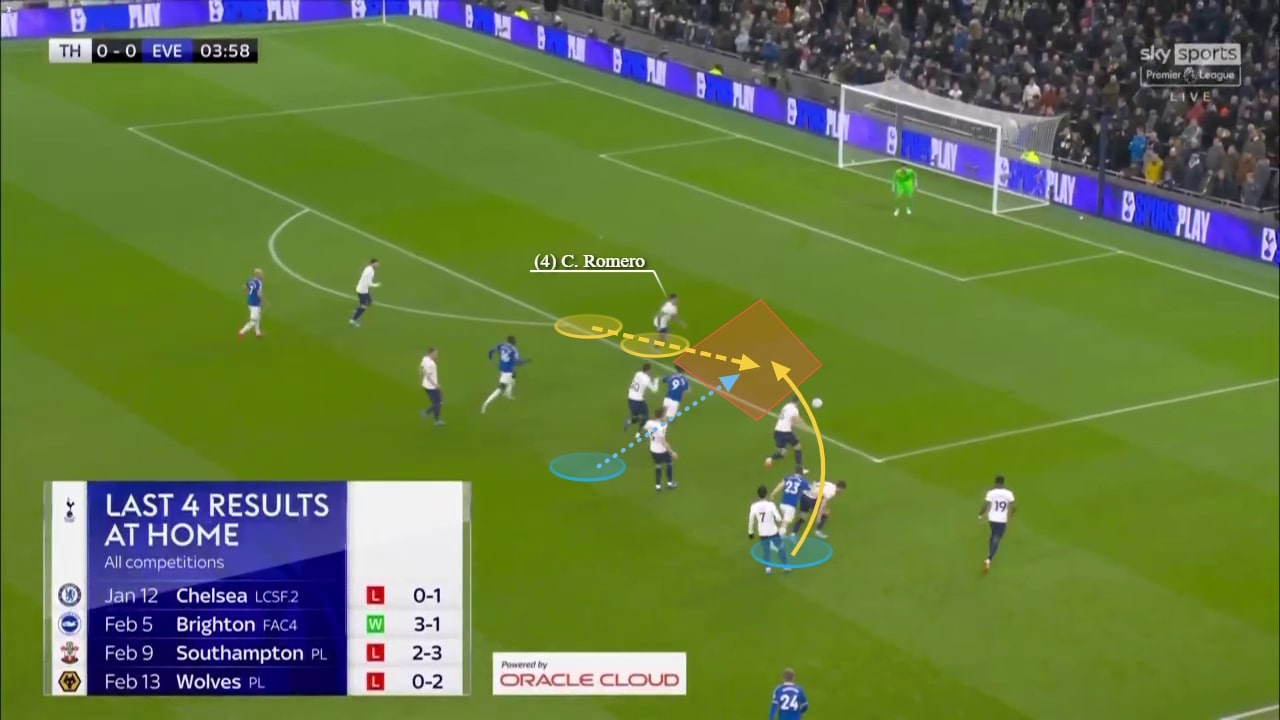 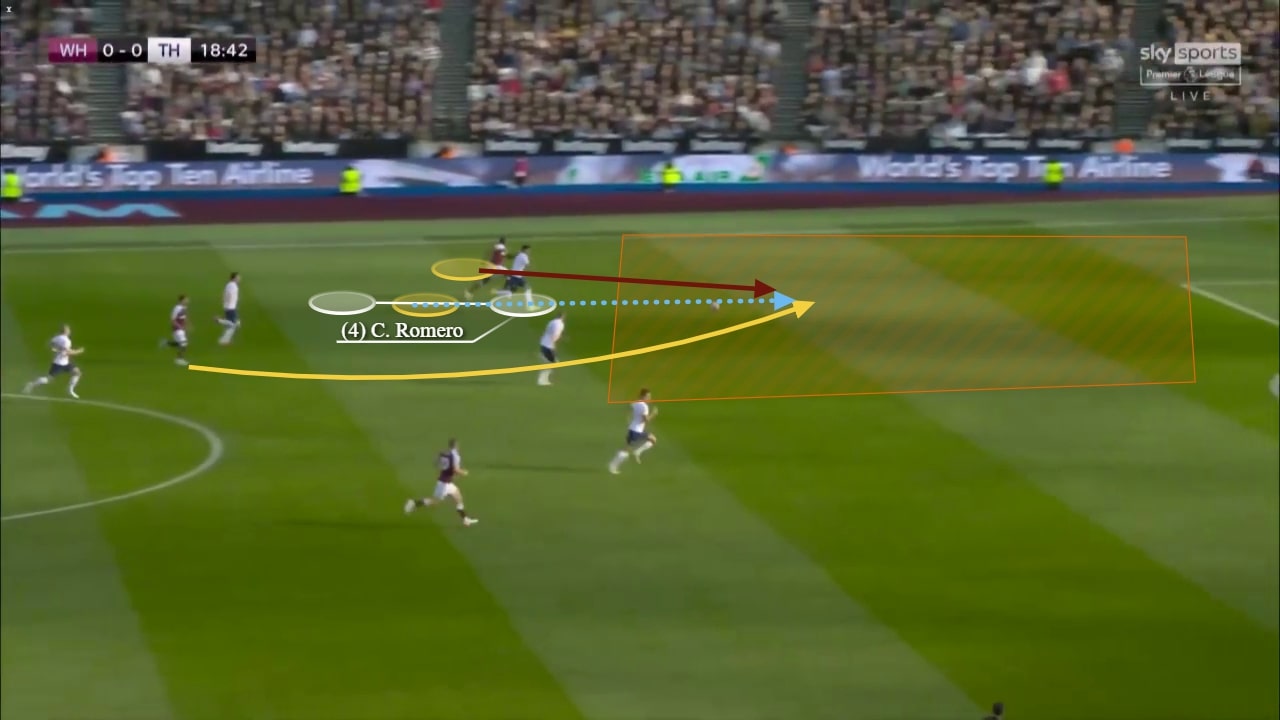 Romero’s pace and awareness ensures he’s able to jet back and support his backline, take on runners from midfield, cover if a teammate loses a marker and deal with counters admirably.

By reading the play soundly, Romero’s been awake to know if he needs to step out, drop back or shift laterally in line with his fellow defenders to ensure compactness and balance.

A force to be reckoned with in aerial battles too, he holds his own due to his ability to pick up the ball’s flight, strength, bravery and desire to win his duels. Competing manfully and never afraid to put his body on the line, there’s been much to admire about his work here in terms of clearing crosses, winning goal kicks or clearances and being an asset at both defensive and attacking set pieces. 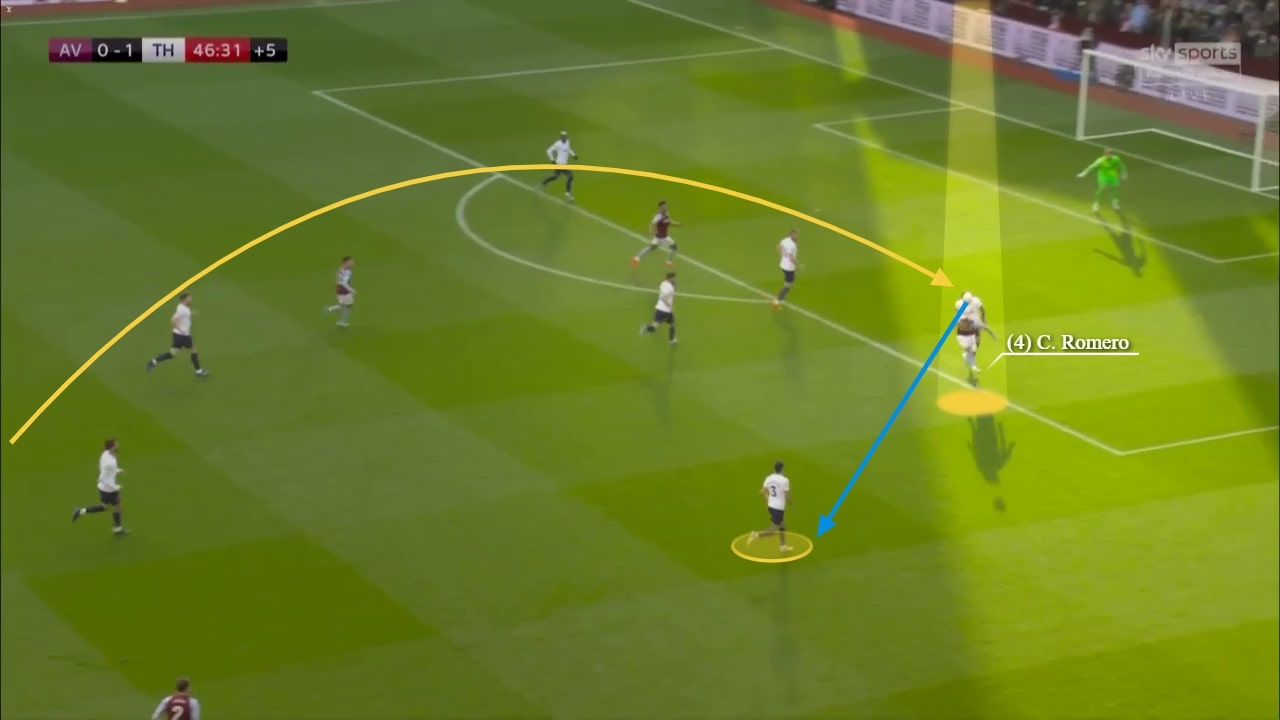 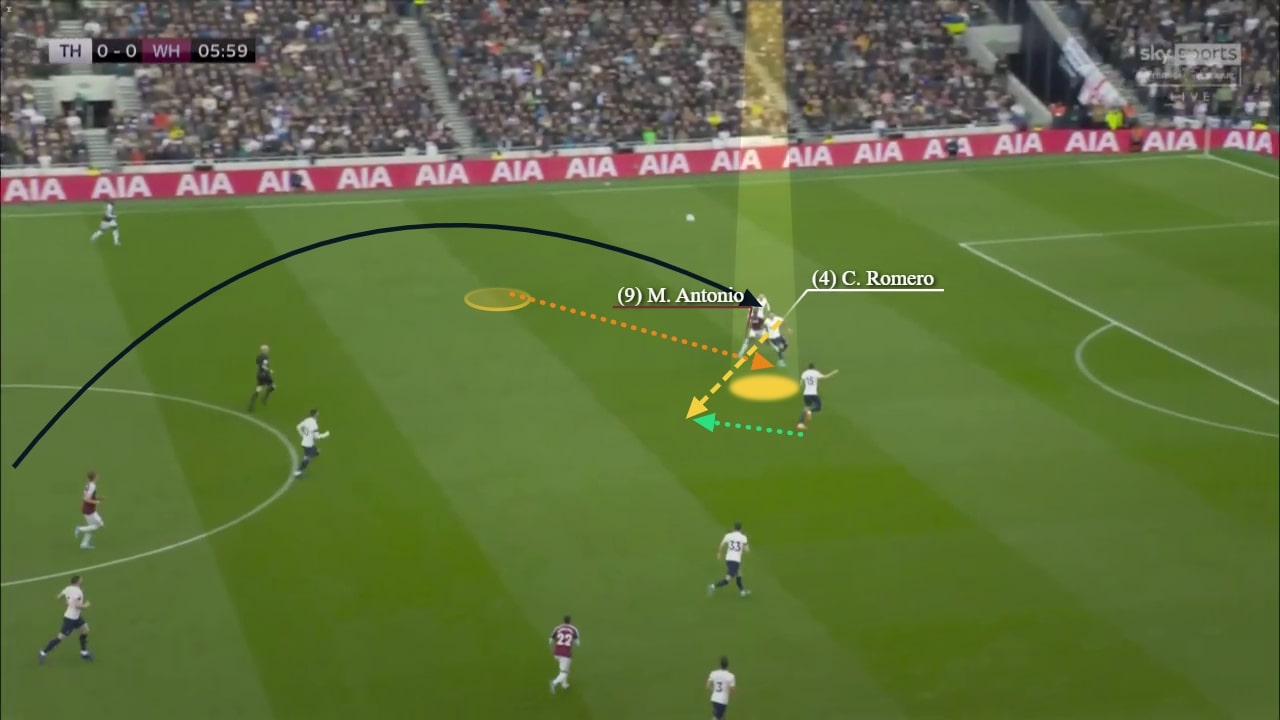 Leading by example and comfortable dealing with a wide range of opponents 1v1, including tall, small, strong and fast foes, it’s little wonder why Conte rates the powerful defender so highly.

To focus on his offensive contribution, and his passing and dribbling ensure he excels here too. A competent passer with a quality range, Romero backs himself to strike progressive passes to beat the press and breathe life into attacks. Be it finding attackers between the lines, launching through balls over the top, switching play or playing crisp passes in close quarters, his aptitude here has been on show often. 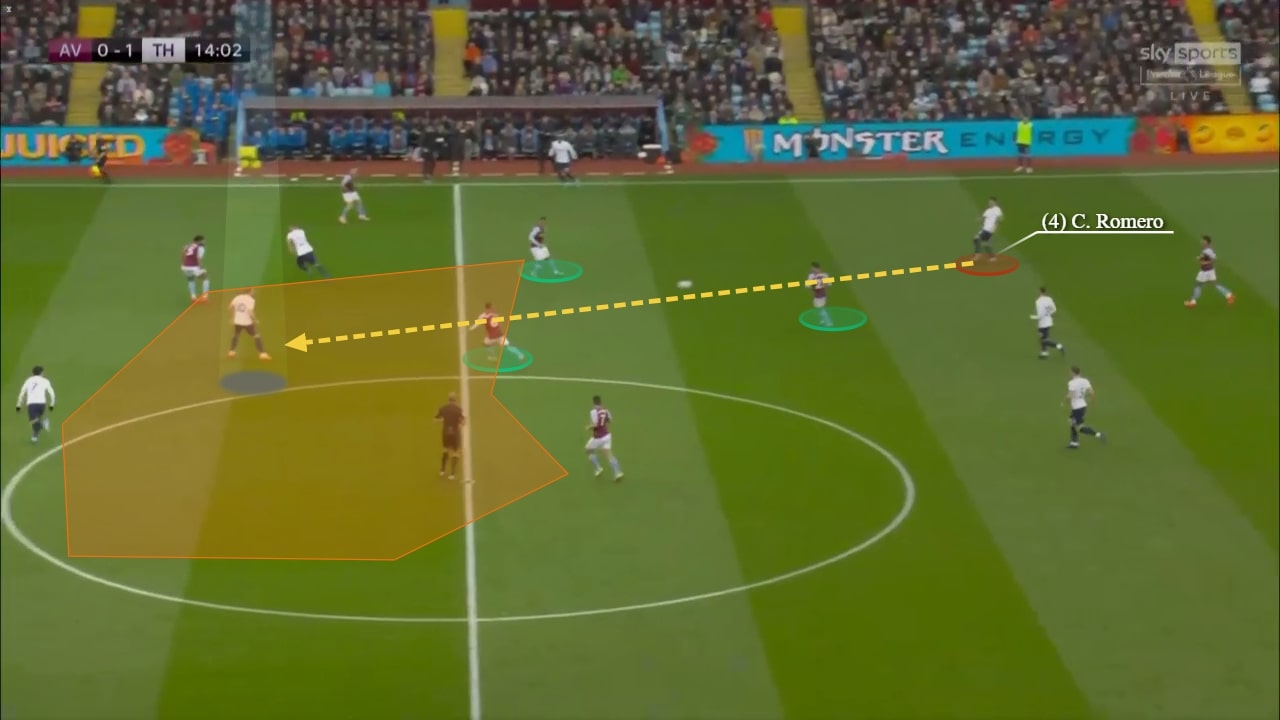 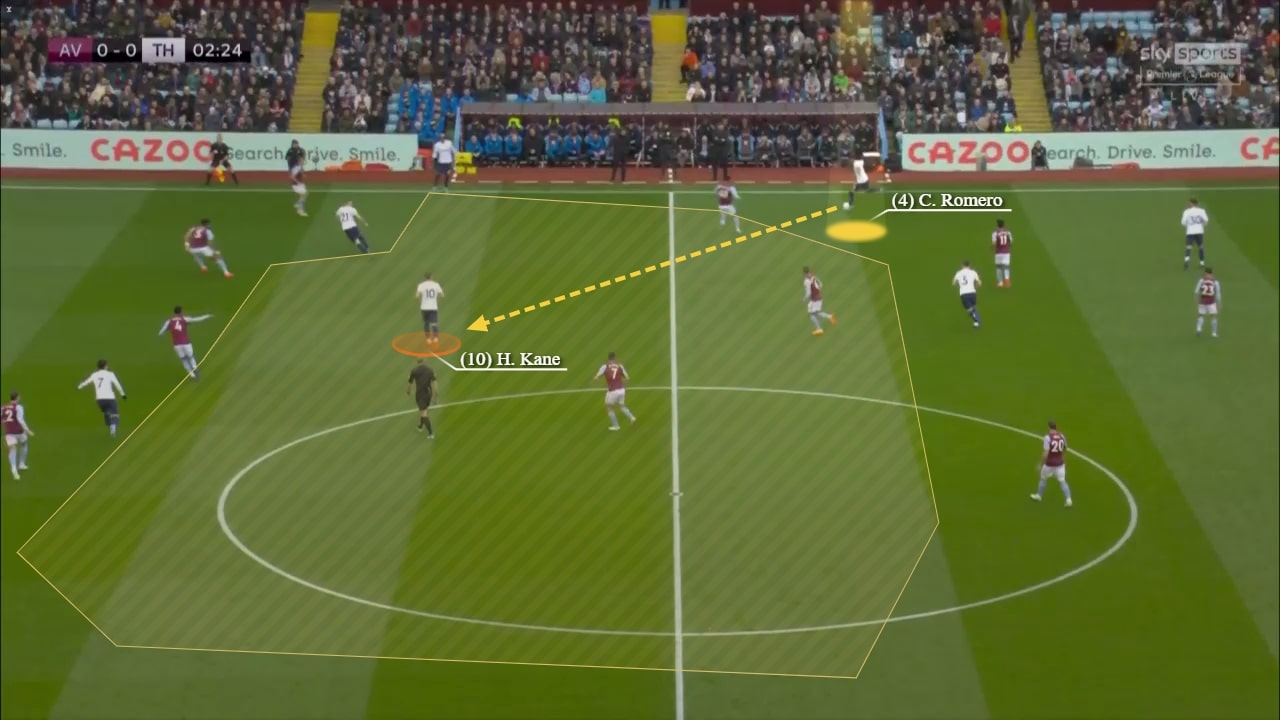 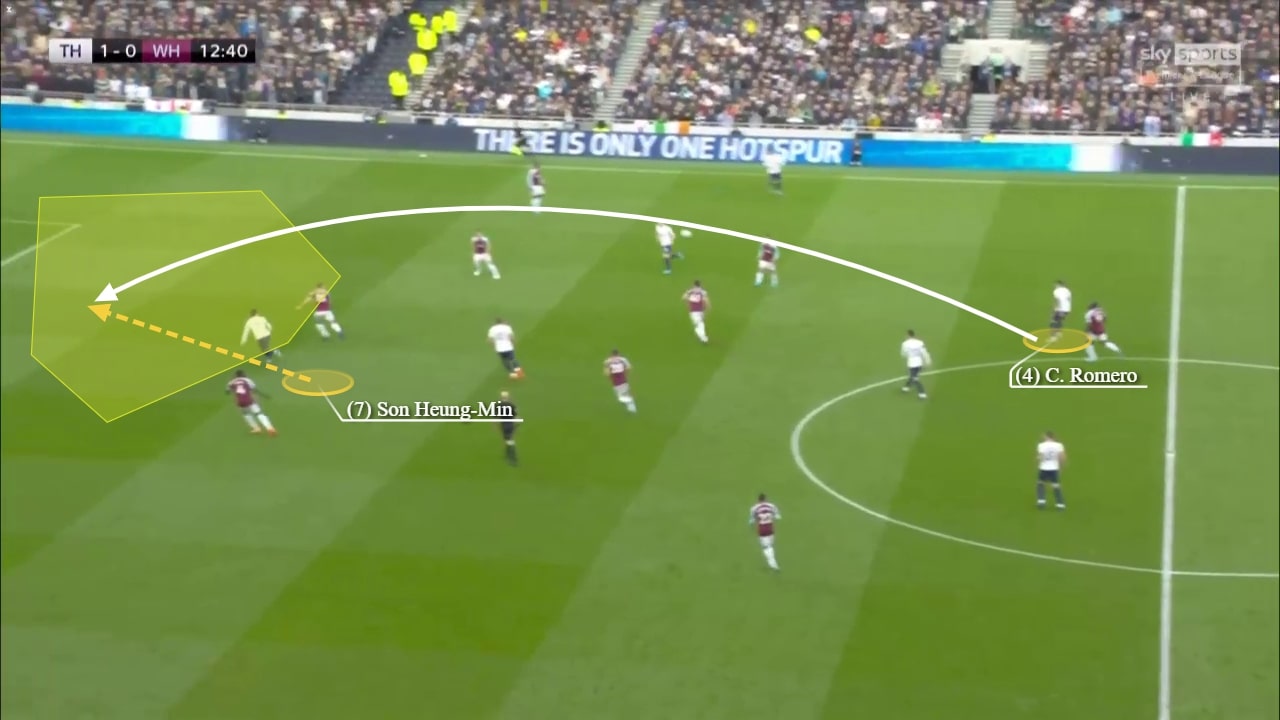 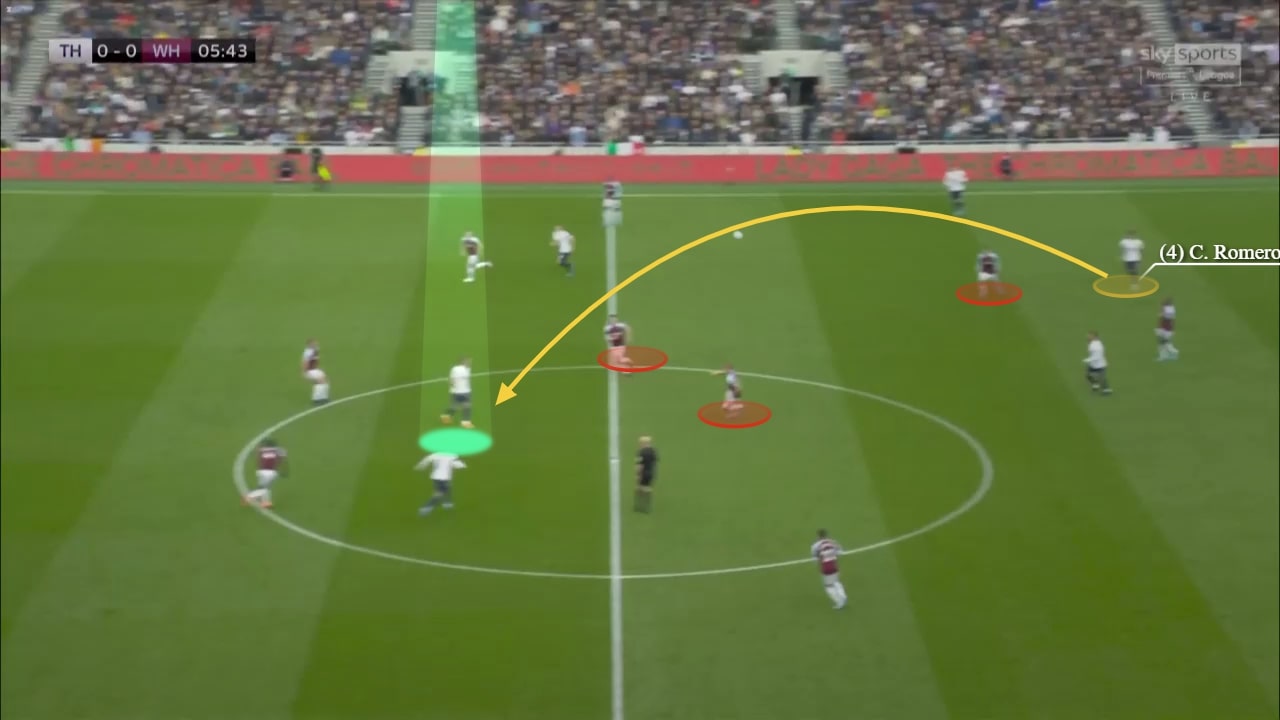 It’s important to note if the expansive option isn’t viable, he’ll instead recirculate possession calmly while waiting for an opening in the opposition block.

Supplementing the above with his ball carrying, Romero loves driving forward with the ball at his feet to add some impetus into Spurs’ attacks. Good at breezing by markers, gaining territory in the half spaces and at luring out opponents, these runs have been a vital string to his bow. 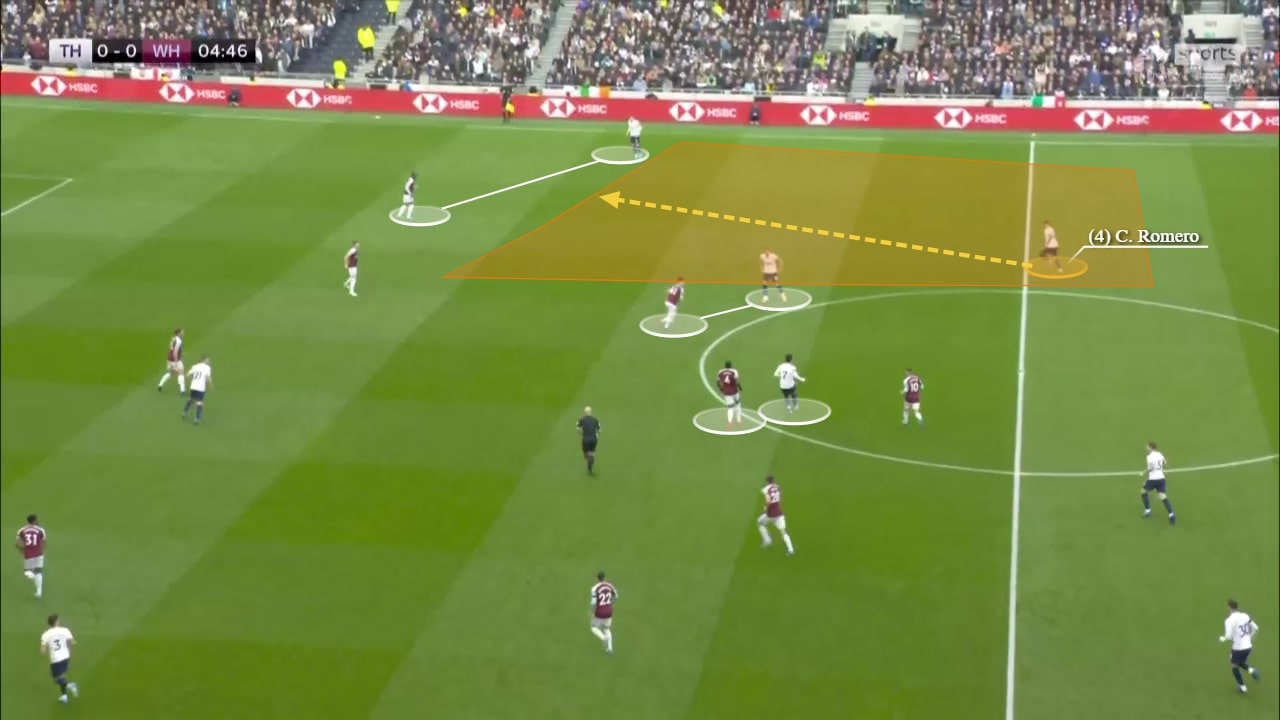 Powerful and explosive off the mark, this, in combination with his strength to withstand pressure to remain balanced, has seen him get the better of foes or win fouls.

Knowing where to be positioned to help form overloads wide and centrally, this has aided Spurs in their quest to bypass the opposition too, with him transferring his aptitude here from his spell in Italy smoothly. 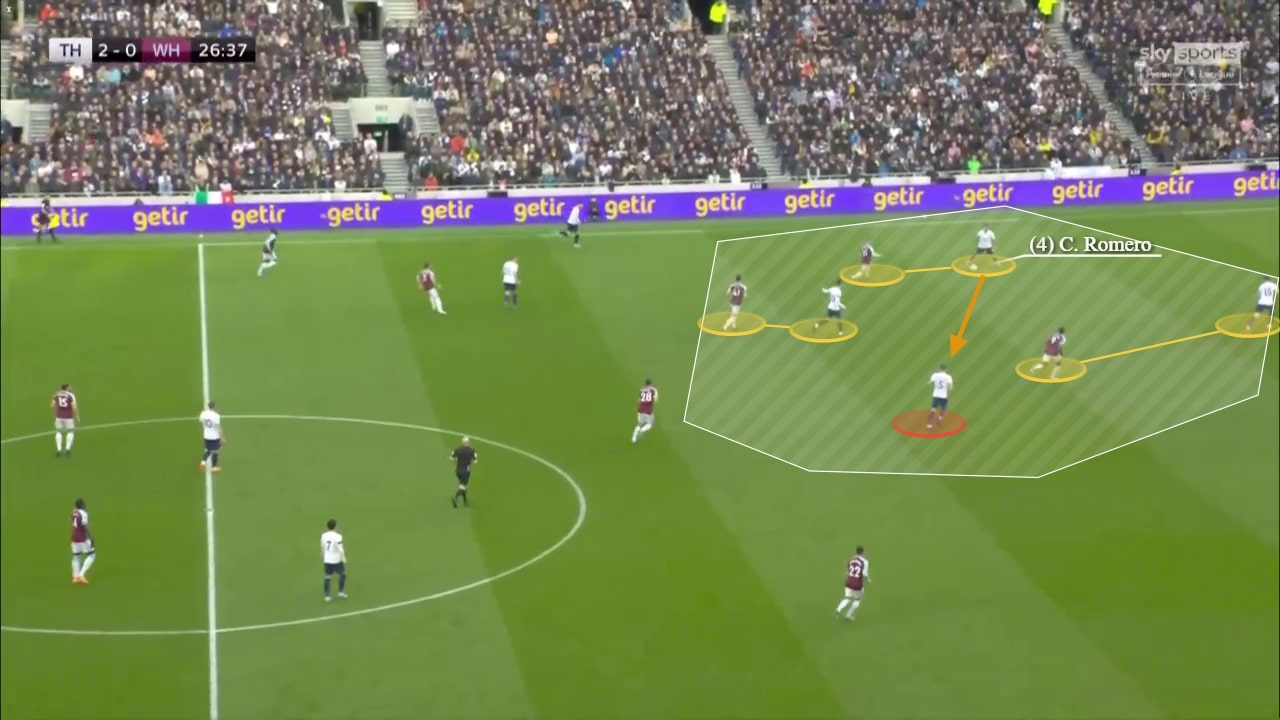 Going from strength to strength in recent weeks and being a key ingredient as to why Spurs have only conceded five goals in their last eight matches, he’s definitely been one of the signings of the season.

Working hard and improving every day under the tactically meticulous and sophisticated Conte, all the signs are that Romero, who won the best defender award in Serie A last campaign, will continue to get better as he matures too. A frightening thought indeed for his foes considering how good he is already and how rapidly he’s adjusted to the rigours of the ultra-demanding Premier League.