Pontus Jansson a key piece of Bielsa’s puzzle at Leeds 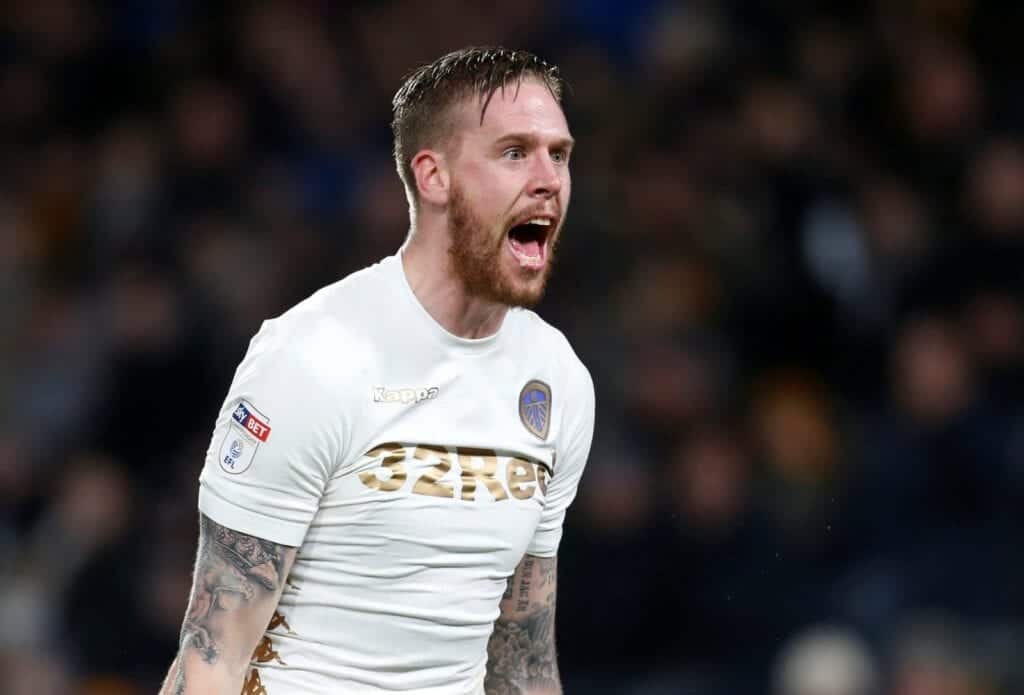 So aggressive and never one to give his opposition an inch, the fan favourite’s certainly been one of the premier defenders in the quality laden Championship. Thriving under Marcelo Bielsa’s demanding and expert tutelage, the Swede’s been an absolutely integral component towards Leeds’ tremendous season so far. Sitting second in the league and on course for promotion, his experience, nous and quality have ensured he’s undertaken his responsibilities with a nice blend of power and intelligence.

Standing 194 cms tall, the physically imposing stopper uses his colossal frame to good effect, as he applies his strength, ability to rapidly pick up the ball’s trajectory and timing of his leaps to be extremely dominant in aerial duels. Never afraid to engage his opponent and put his body on the line, his bravery and dedication to winning every duel notably extends to when he’s blocking shots, flying into win tackles or committing a foul for the benefit of the team.

An alert reader of the play, the 28-year-old’s constantly scanning his environment to refresh his mental imagery of his surroundings, so he can gain an insight into how the play will unfold or what his opponent may do next. This ensures he’s ready for when his man embarks on a run in behind, checks wide or towards the ball carrier or performs an interchange of position. 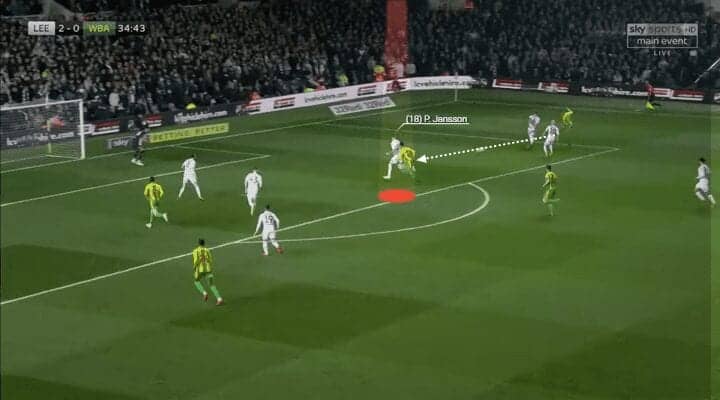 With Bielsa usually instructing his centre-half to be man-oriented to his opponent, it’s not uncommon to see Jansson follow his man to around the halfway line and beyond, in order to stop them from being able to turn or enjoy an easy touch. By getting touchtight and vigorously pressuring his adversaries, this enhances the chances of him forcing a turnover so Leeds can recover possession and attack again. Although it can inherently leave spaces at the back, he’s more often than not successful, and in the event he isn’t, his colleagues are typically positioned to cover the spaces. 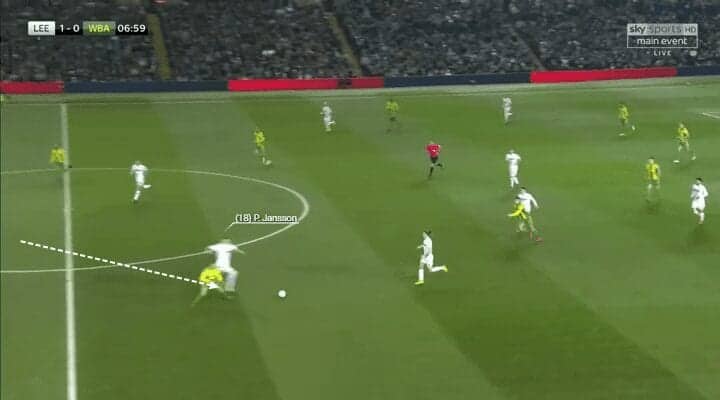 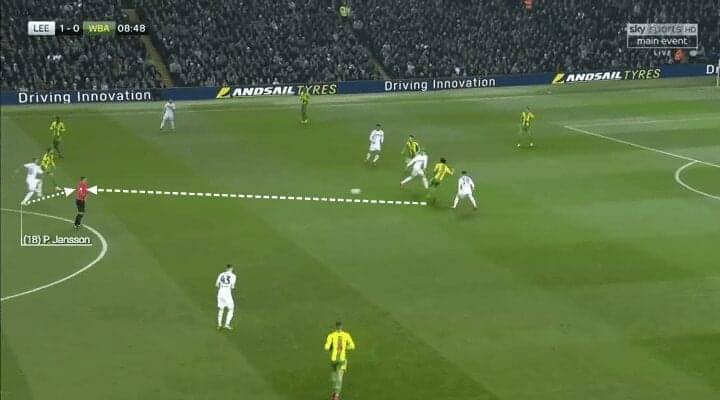 While he’s a very proactive operator, he’s also shown his smarts and positional sense when dropping back into a mid-block, where he keeps his spacing nicely between his defenders and shifts from side to side diligently. Forming a formidable partnership with captain, Liam Cooper, their understanding, leadership and presence have made sure the Whites are usually compact and well organised.

If required to cover for a blown marking assignment or for a fellow defender, Jansson’s anticipation sees him pick up the slack and react quickly to snuff out the danger for his side, as he’ll persistently do what he can for the team. 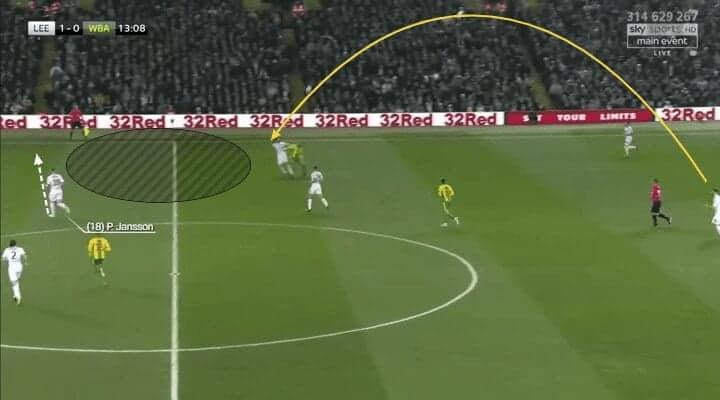 Meanwhile, on the offensive end, he’s been equally instrumental. A key contributor to Bielsa’s demands to build-out from the back, his passing has been vital in them progressing beyond the first line of pressing. Remaining composed and patient while he waits for the right moment to hit a penetrative vertical pass, he’s content circulating possession accurately as Leeds will bide their time as they wait for a weakness in the opponent’s shape. 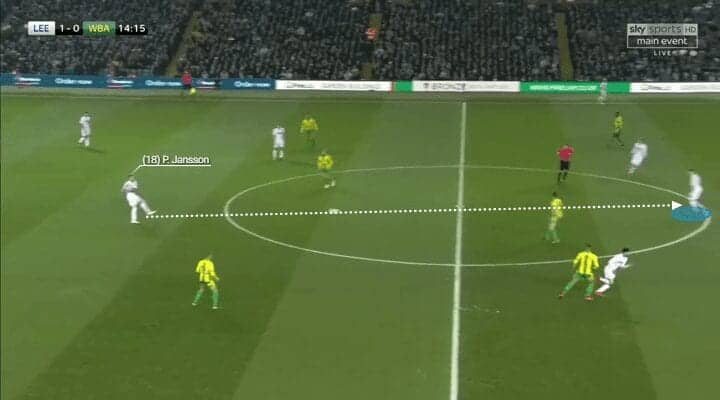 Striking his upfield passes firmly, so his passes break lines but can also be controlled comfortably by his teammates, his weighting and accuracy has been on point. In addition, his raking switches of play to ensure a winger or fullback can be placed in advantageous 1v1 battles have only further underlined his quality.

Factor in his concise ball carrying ability, where he’ll frequently surge upfield if an opening arises, which crucially draws out a pressing action, and it’s been fantastic to observe his intent to push his team forward with his dribbling or passing skills.

Crediting the iconic Bielsa as one of the best managers in the world and noting how much he enjoys learning from and working alongside him, there’s no doubting what a positive impact Bielsa has had on his game.

So important to Leeds in all phases of play, the heroics of Jansson will continue to be vital towards Leeds’ desire to finally return to the Premier League for the first time in 15 years. If he can help them achieve exactly that, then he’ll be forever able to look back with immense satisfaction about the pivotal role he played in this historic campaign under their legendary manager.