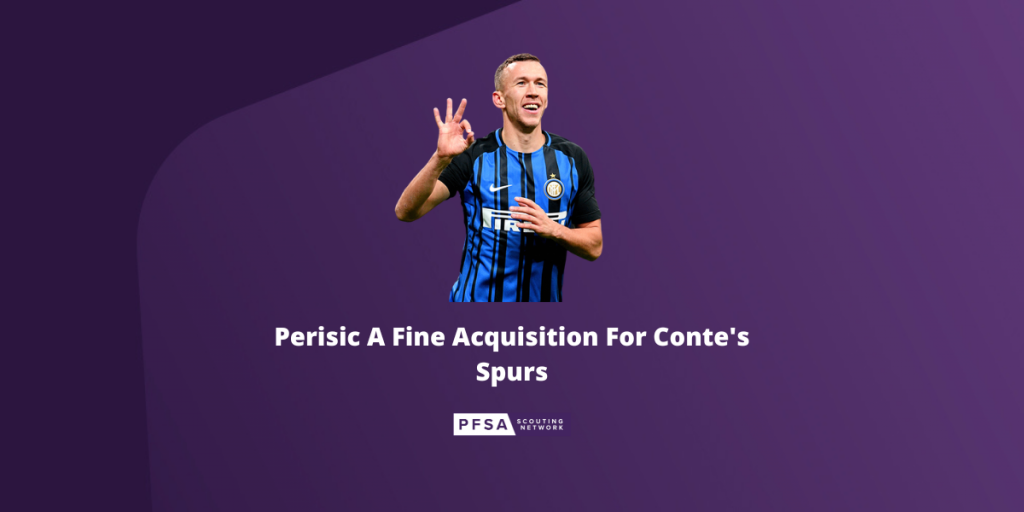 Tottenham Hotspur’s signing of Ivan Perisic is certainly an astute piece of business to kick off their summer transfer window.

Experienced, playing at an extremely high level over the last few seasons and familiar with Antonio Conte’s demands, there’s plenty of upside to acquiring the Croatian star on a free.

Having played an integral role in Conte’s title winning Inter Milan side of 2020/2021, their reunion and quality relationship should ensure he hits the ground running for the new campaign after enjoying a full preseason with his new team. In addition, the fact he’s such a formidable athlete should mean he’ll have little worry adapting to the demands of the Premier League.

Proving himself to be one of the premier wingbacks in Europe over the last two seasons for Inter, the versatile 33-year-old, who can also play as a winger or as an attacking midfielder, will inject plenty of cut and thrust into Tottenham’s squad.

All action, explosive and an absolute powerhouse going forward, expect Perisic to contribute heavily and add another dimension to Spurs’ offensive armoury. The scorer of a combined 15 goals and supplier of 14 assists over the last two campaigns in all competitions, this underlines what a weapon he is. 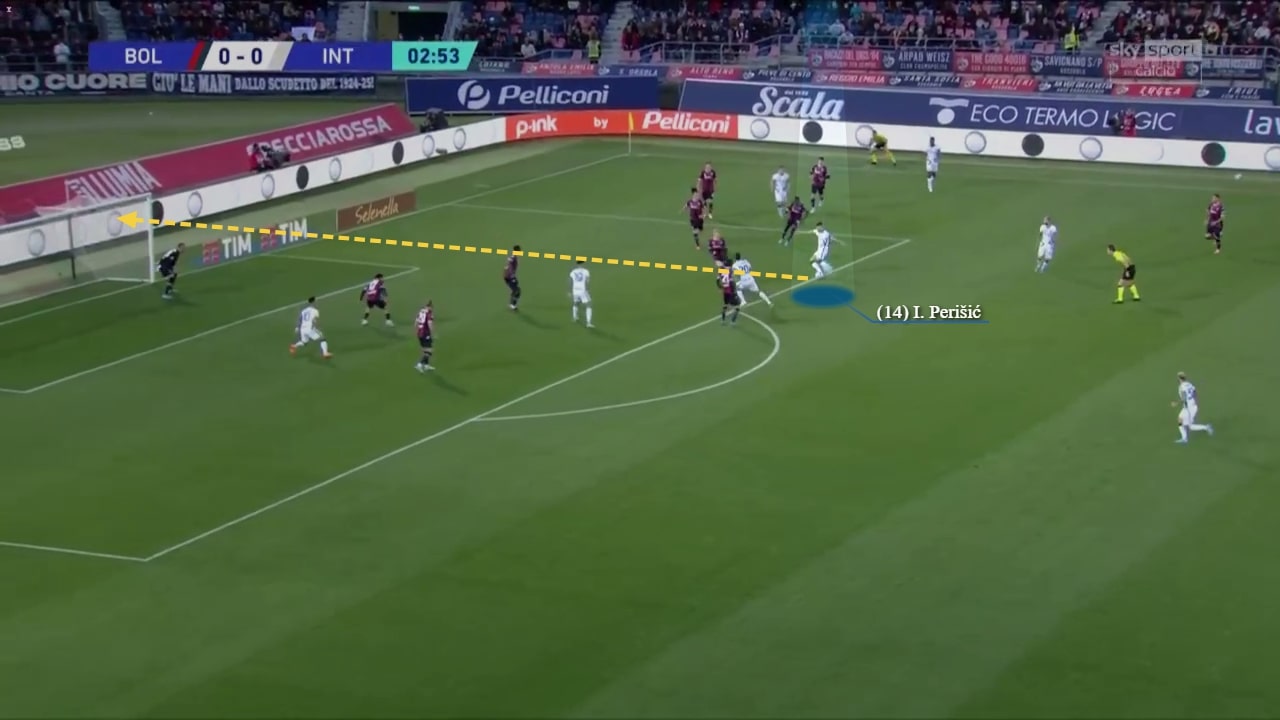 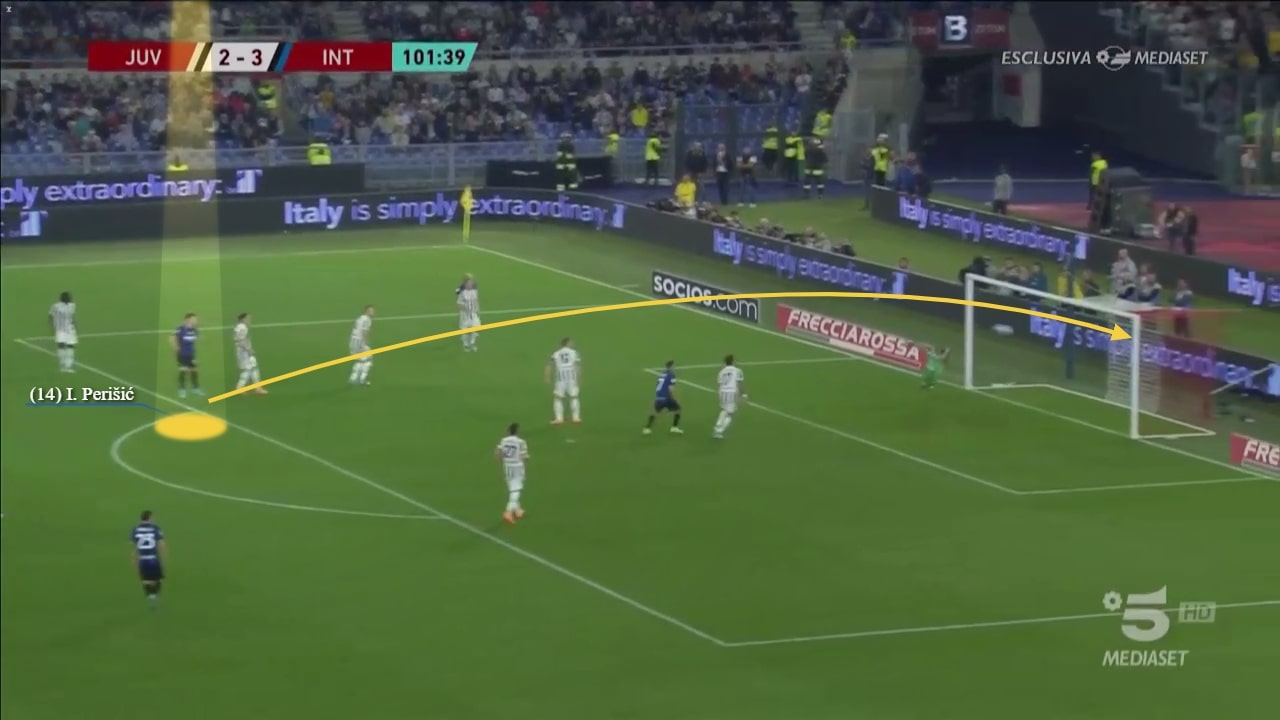 A master at timing his late arriving blindside runs into the box, defenders often can’t deal with his threat. Gaining a dynamic advantage over his more stationary ball facing opponents, thus allowing him to use his momentum and wicked leap to attack crosses and cutbacks, opponents find him a nightmare in such instances. 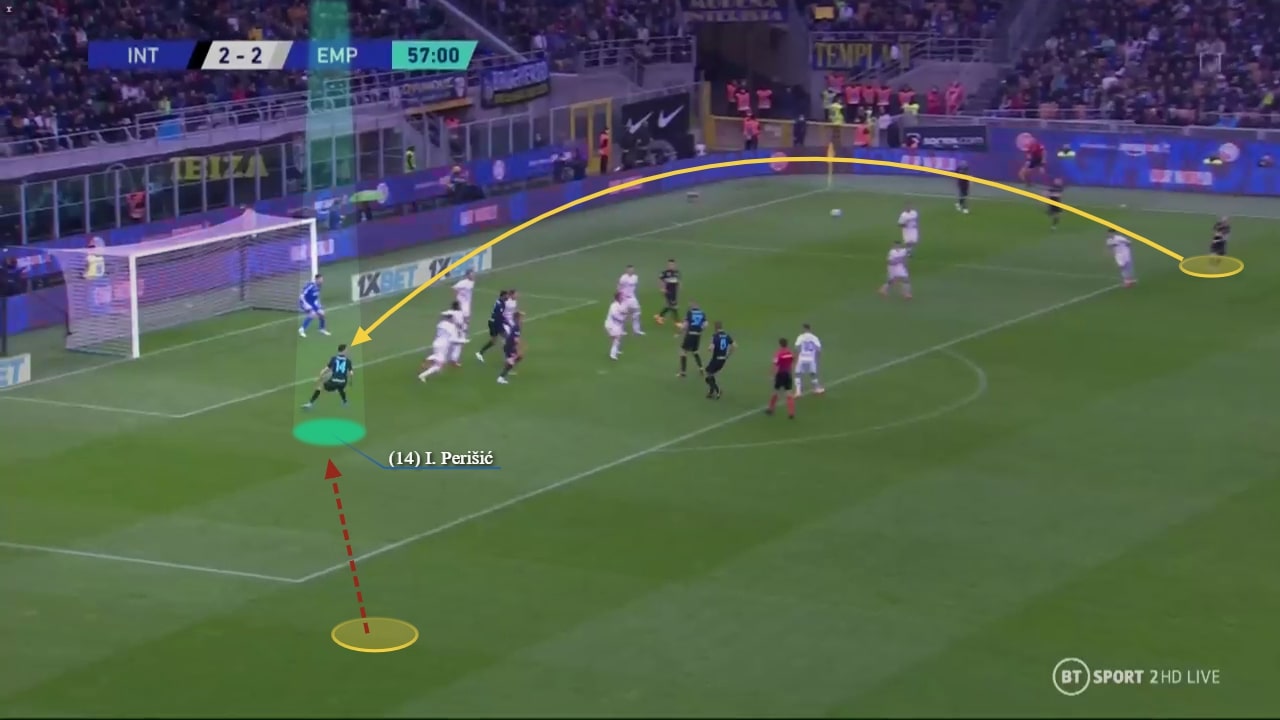 Picking his moments coherently when to pounce once the ball holder can spot him, Perisic then angles his runs smartly to be a valuable option inside the box.

Also elite at timing his surges when the ball is on his side, Perisic, who often plays in an extremely advanced position on the shoulder of the last man, exposes opponents backlines with his overlapping runs and excursions down the channels when defenders step out.

Moreover, his shrewd underlapping runs into the box and out-to-in runs into central areas after rotating with a teammate compounds issues for opponents, causing marking dilemmas that usually allow him to gain valuable separation from his man. 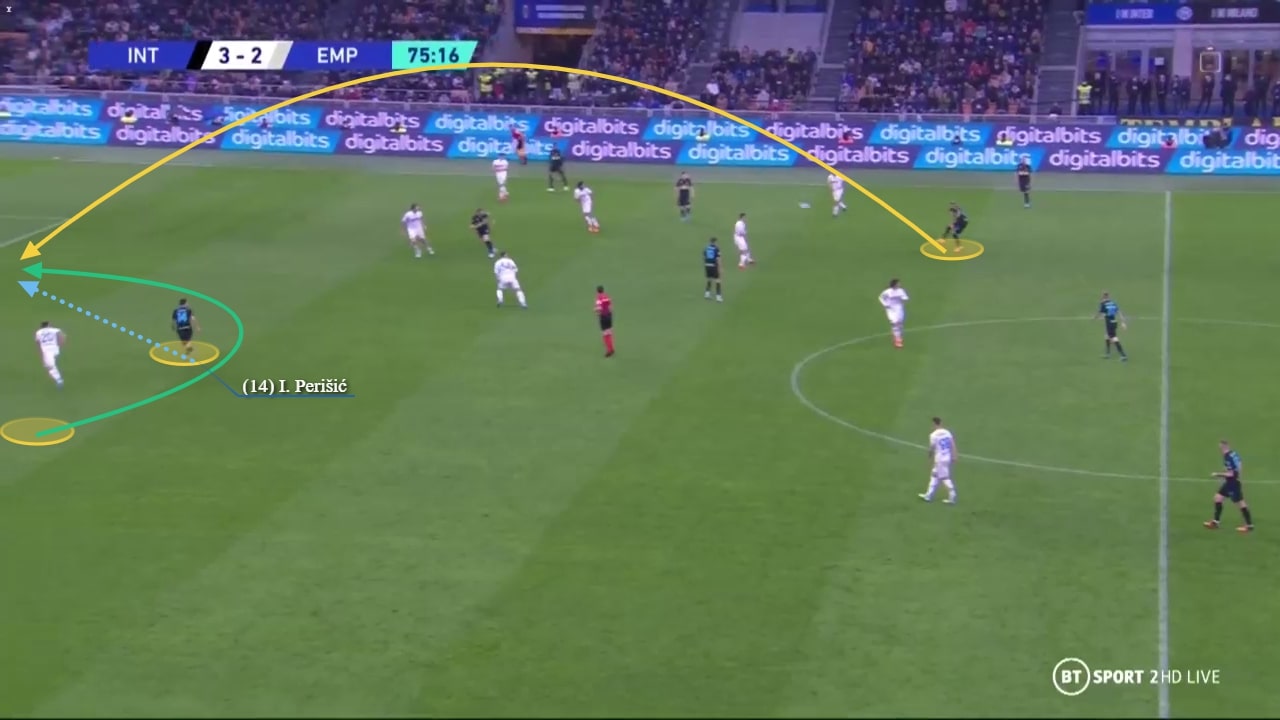 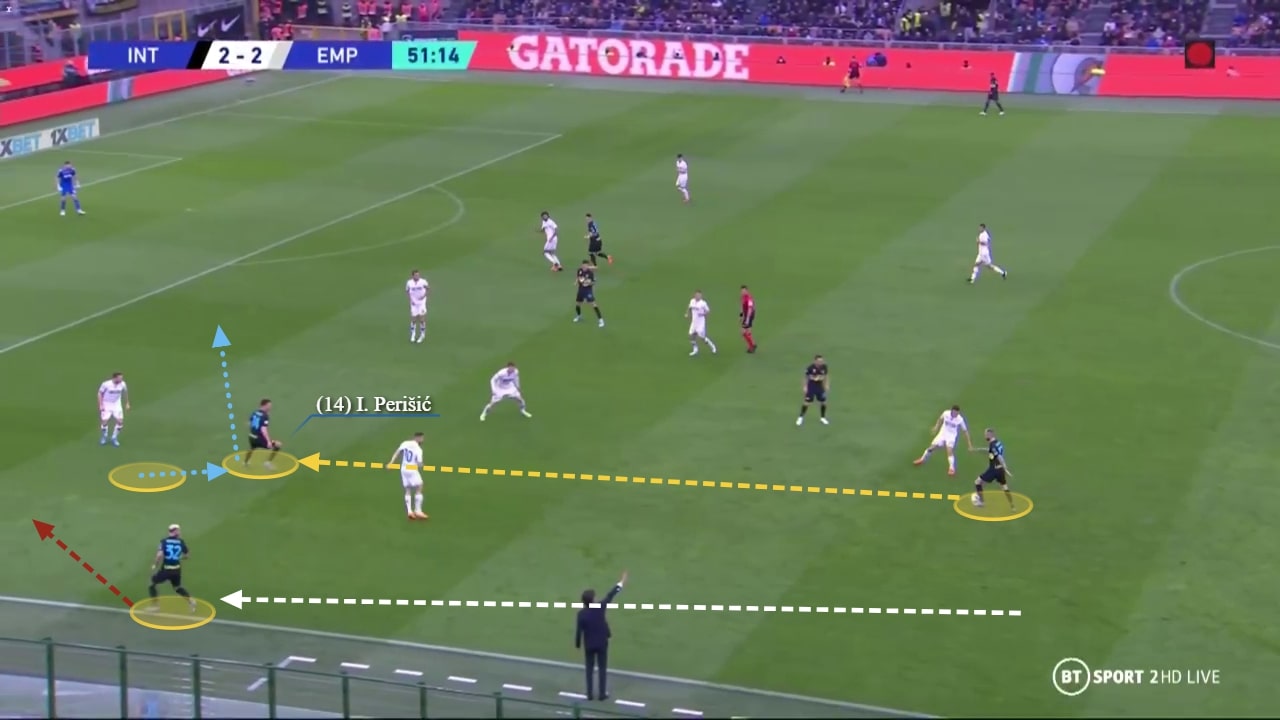 Always on hand to stretch opposition backlines horizontally and vertically, this sees him serve as a great option for switches of play so he can be in advantageous 1v1s or lure out markers to create gaps for a teammate to exploit between defenders. 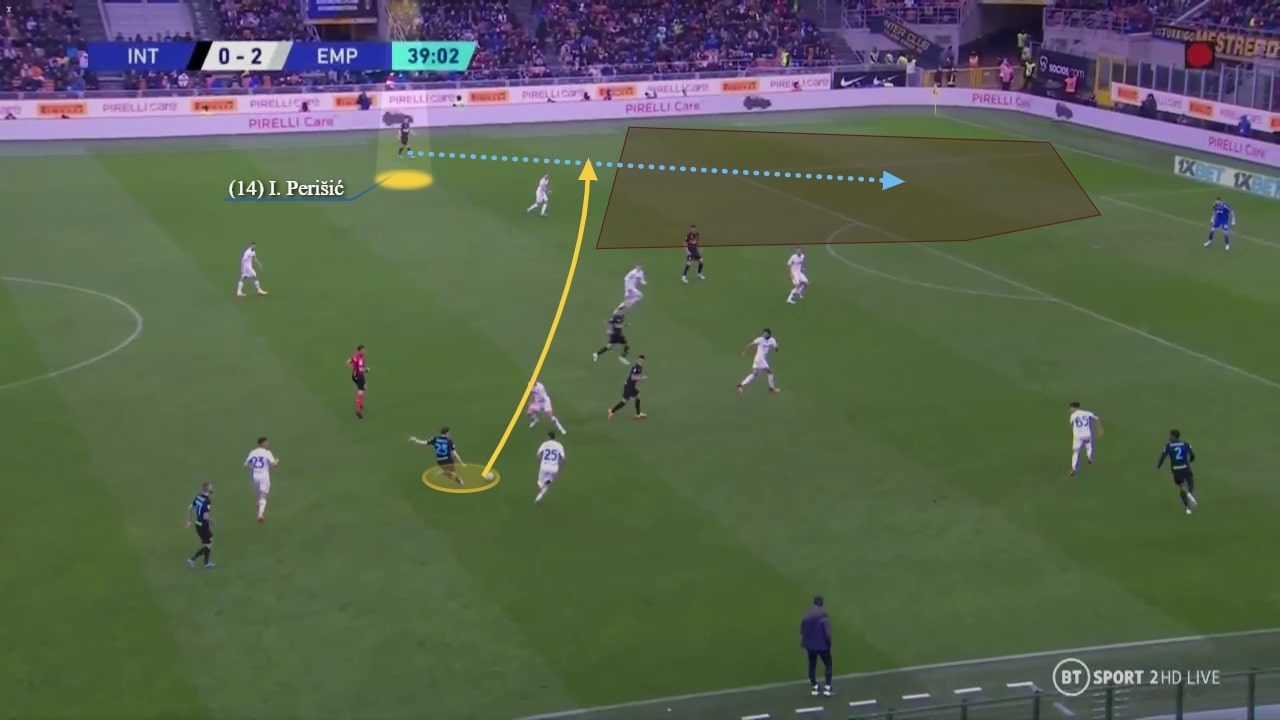 Knowing his role inside-out at Inter working under both Conte and then Simone Inzaghi, in combination with the wonderful relationships he shared with his teammates, meant they were aware of triggers when to rotate, attack certain spaces or alter their position to unbalance adversaries to help one another find room. As a result, he’d pop up in striking areas, in midfield, in the half spaces and inside the area, with all this placing doubt in the minds of defenders who to mark while generating promising scenarios for his team to explore.

Set to continue playing in this style under Conte again, once he gets up to speed with his new colleagues, he’ll no doubt be a massive force to be reckoned with at Spurs too.

Once in possession, the former Champions League winner with Bayern Munich is equally damaging. Two footed, boasting a nice first touch and a menace with the ball at his feet, he’s certainly a man to fear on the dribble.

Capable of outfoxing his foes in a variety of ways, he uses stepovers, sharp changes of pace and direction, shimmies, nutmegs and razor sharp turns to get the better off his markers. Blessed with searing acceleration and top end speed, there’s almost no stopping him once he’s in full flight, for his unpredictability, array of manoeuvres to beat opponents, pace and two footedness ensure he’s difficult to contain.

Consequently, it’s impressive to watch how successfully he generates room for himself so he can shoot, draw fouls in the final third or attract multiple markers to then find a free man.

Progressive and full of ambition in his passing too, Perisic’s proven what a handy chance producer and finder of teammates in quality positions he is. Able to go down the inside or round the outside of opponents, he can fire in crosses and cutbacks on either foot, thus opening the possibilities for he and his team while making life more challenging for his man.

Accurate, precise and reading situations nicely, he does a good job of choosing the best delivery depending on the situation. Be it hitting hard cutbacks across goal or to the edge of the box, or crosses with whip, power, swerve of loft, his decision making and pass selection has been admirable. 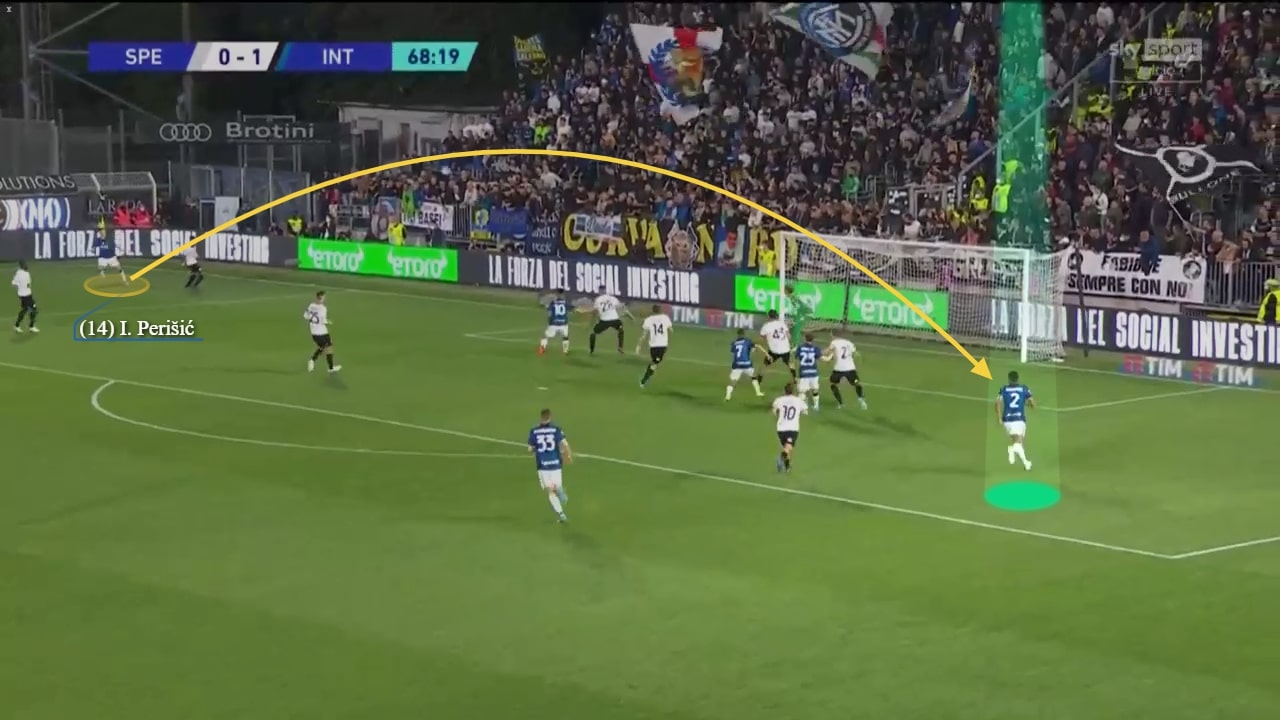 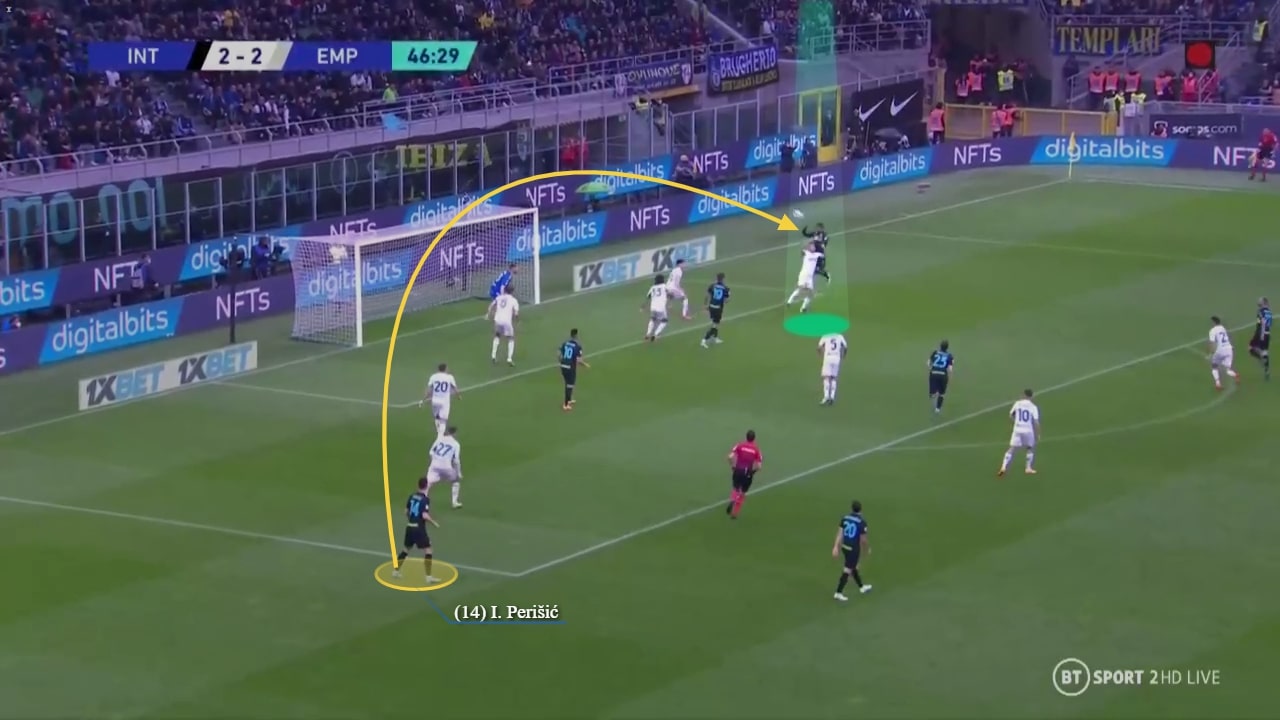 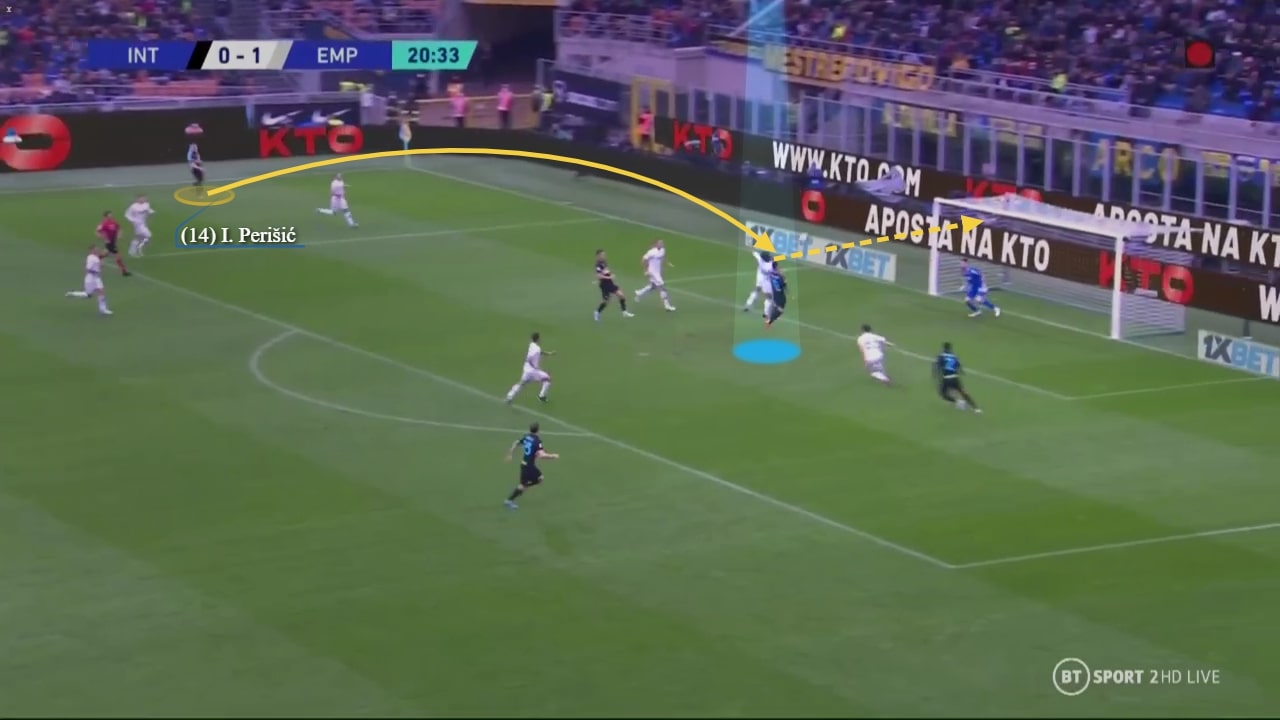 Furthermore, picking when to target the front or back post, central areas or runners arriving late to take advantage of the space made when the defence collapses deeper has enhanced his worth.

Competent at striking through balls in behind and down the channels as well, plus adept at hitting line breaking passes into the feet of the attackers, teammates’ movements are regularly obliged. Weighting his passes ideally and incisive at spotting runners, the examples serve as a testament to his aptitude in this regard. 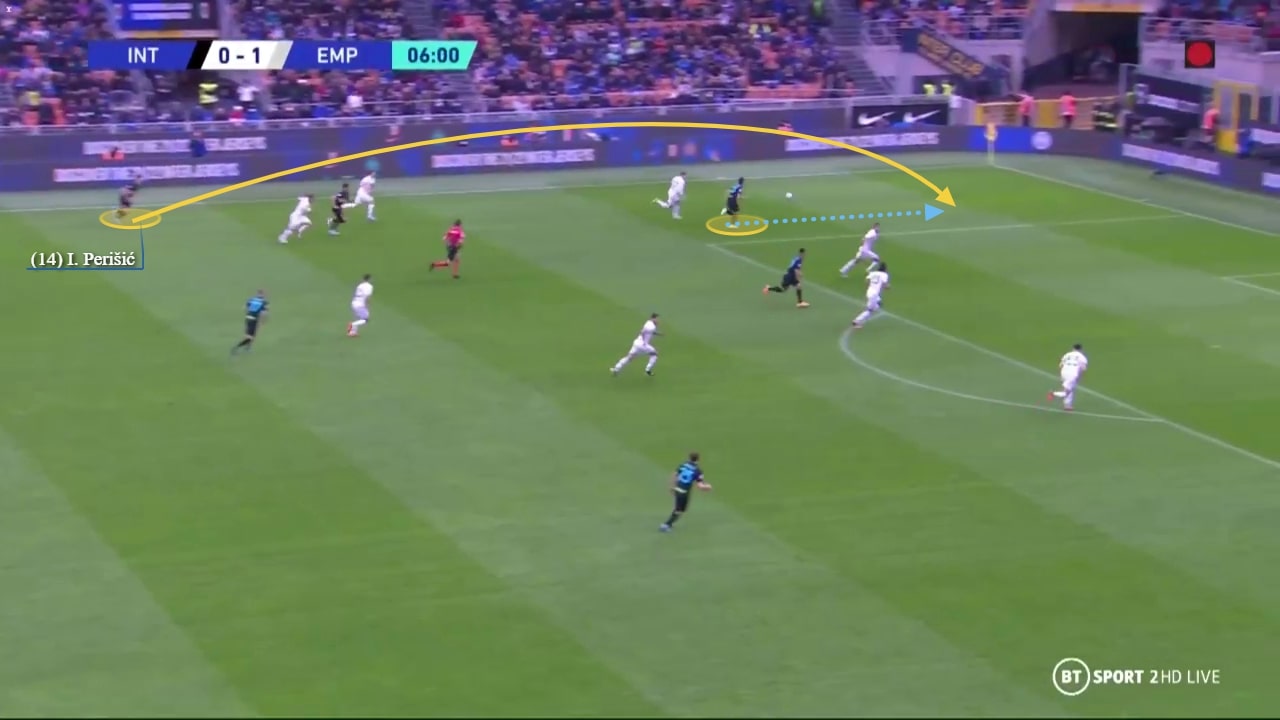 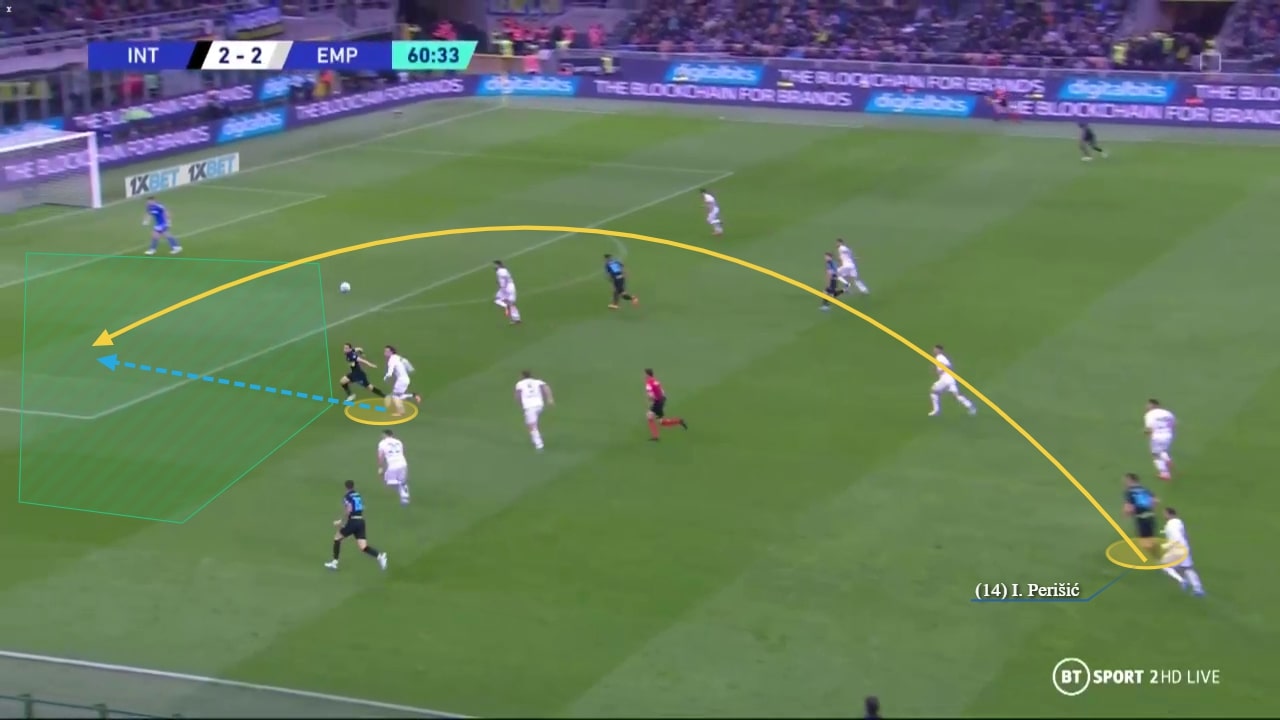 By the numbers, among players in his position across Europe’s top five leagues, the below statistics (as per Fbref) demonstrate what a demon he is offensively.

While he undoubtedly does his best and most eye-catching work on the offensive end, his energy, stamina and intensity ensure he contributes manfully on the defensive end too.

Great at tracking runners, pressing aggressively and at getting back to support teammates who are dealing with counters, his running power and swiftness across the turf are huge assets.

Not afraid to get stuck into his challenges and well versed in his positioning following his previous work under the disciplined Conte, there should be minimal adaptation for him in this phase of the game either.

With Conte wanting to bolster his Spurs squad with some experienced, high level operators, bringing in Perisic is a fantastic addition for a Tottenham team who are looking forward to challenging for honours domestically and in the Champions League.

“I’m really excited to start with my new sports family, it’s going to be my home,” Perisic told the club’s official website.

“When I got the contact from the coach and sporting director [Fabio Paratici] I told them that I really wanted to come here, and to the Premier League since 2009 when I started playing professionally in Belgium. This is the moment and I can’t wait.

“It’s a privilege to work with a coach like this, we did well at Inter – we won the league after ten or 11 years. It was really a perfect year. I’m really happy to see him again, he lives football. Every minute, every hour, every day. Even when he’s sleeping, he’s thinking about football. I like his character and I know we’re going to do a great job here.”

Having won league titles with Borussia Dortmund and Bayern Munich in Germany, won a champions league with Bayern, scored in the 2018 World Cup final and claimed a Serie A crown with Inter, Perisic will now set his sights on achieving great things with Spurs.

A proven winner with a formidable attitude, the signing of Perisic is a perfect fit for Conte’s Spurs and one who’ll crucially be ready to impact from the outset in what looms as a massive 2022/2023 campaign for them.