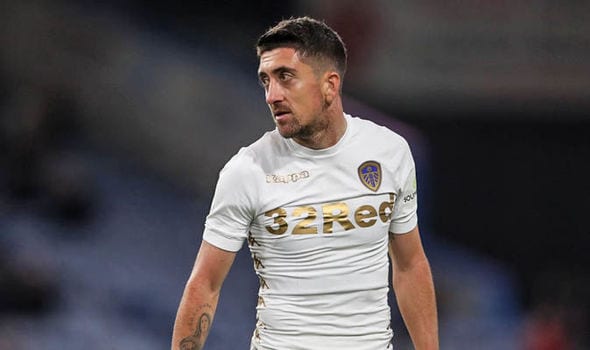 Despite being in the twilight of his career, Pablo Hernandez’s importance to Marcelo Bielsa’s Leeds United is unmistakable.

Indeed, the former Valencia attacker, who’s been awarded with four Spanish international caps, has been a key driving force behind Leeds’ fantastic season so far. Playing some hugely exciting football, they currently sit second on the Championship table and look destined to finally return to the Premier League. And Hernandez’s creativity, nous and technical execution has undoubtedly been key towards this, for the 33-year-old’s scored a wonderful eight goals and supplied 11 assists from 25 starts in the Championship.

So intelligent and with an outstanding positional sense, his movement has been the foundation behind his success. Having relished playing under Bielsa’s methodology, he’s adapted brilliantly to the meticulous and demanding Argentine’s tactically astute philosophy.

Always checking his surroundings and probing to find openings, he picks up swiftly where the vacant spaces are in relation to his teammates, the ball and his opposition. Timing his movements nicely so he can avoid his marker, create positional and numerical superiorities and get into positions for his teammates to pick him out, he presents his colleagues with vital options to progress upfield.

Possessing a strong understanding with his colleagues, the little maestro’s incisive rotations with his midfielders, fullbacks and attackers have been a joy to watch. By constantly performing interchanges of position, using opposite movements and double moves, Hernandez and his mates have been so hard to keep tabs on as they’re always changing defenders’ reference points. This subsequently causes decisional issues on who should mark who, which Leeds have taken full advantage of to unlock their adversaries. 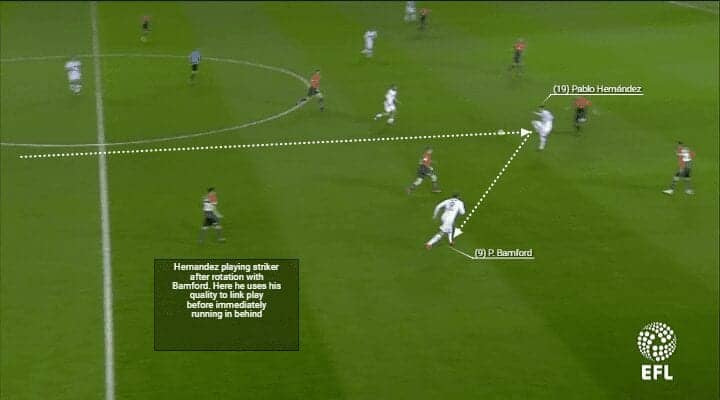 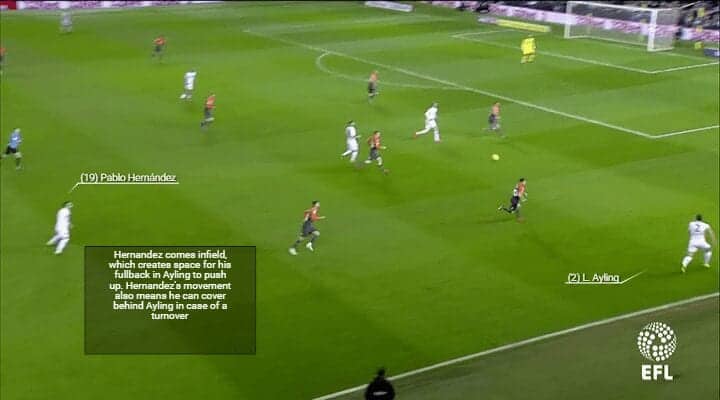 Adept at operating in between the lines, working the channels, running in behind and dropping deep, the Spaniard’s variations have only compounded issues for his markers.

Brimming with creativity and imagination in his passing, the skillful attacking midfielder is full of ambition in his distribution, in order to breach or destabilise his foes’ stopping setup. Confident and assured, if the moment to play a progressive pass arises, he’ll take it. Most of the time he finds his target too, with his accuracy, weighting and vision serving him wonderfully.

Be it combining intricately in close quarters with slick one and two touch play, hitting penetrative through balls (in the air and on the ground), switching the play effortlessly, crossing or finding teammates in between the lines, he’s a real difference maker for the Whites. His crafty dinks over the top and how he disguises his passes with his eyes also warrant mention. 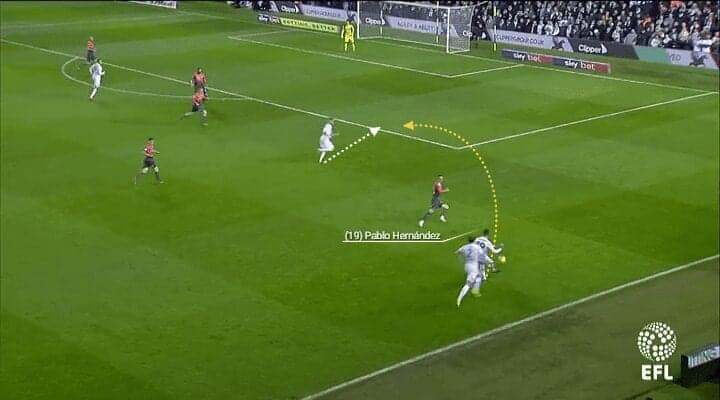 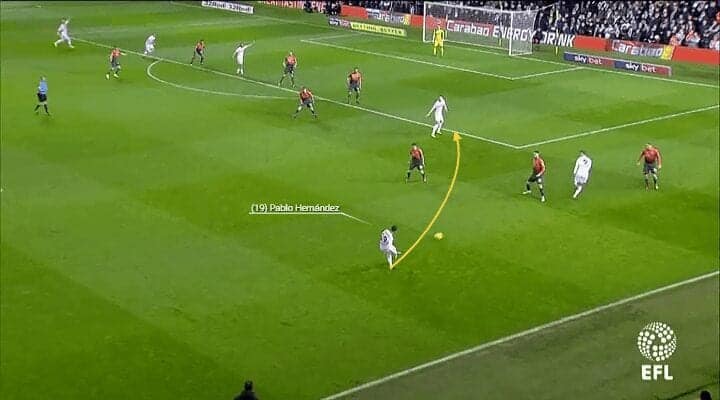 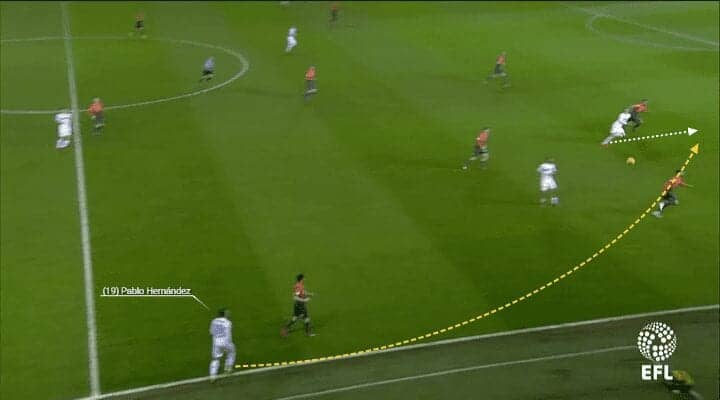 Accompanying the above with his superb dribbling ability, Hernandez enjoys taking on his opponent in 1v1 duels, where his trademark drives at his man, in tandem with his nice array of moves to outfox them, are a fine asset to Leeds. Carrying the ball forward strongly in transition too, his ball handling exploits have been a real feature, as they notably allow him to provoke pressing actions to free up a man or open a passing lane. 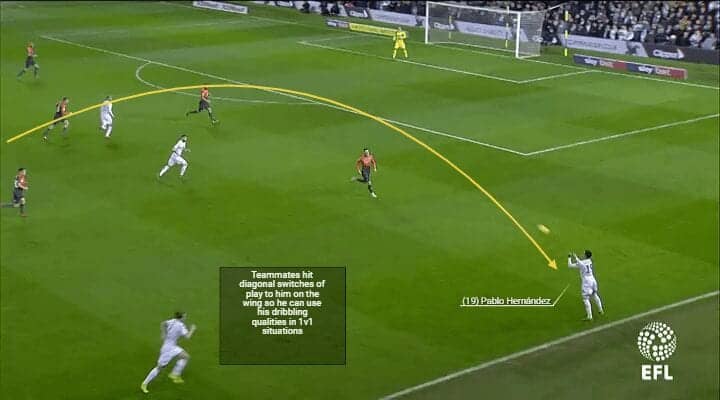 Possessing a lovely first touch and sharp ball control, this helps him evade pressure so he can wriggle free from danger or patiently hold onto the ball while he waits for a viable option to become available. Nimble and agile, he’s certainly been a elusive and press resistant presence for his trackers.

Bielsa’s glowing words of praise for his offensive genius after their recent clash with Middlesbrough sum up how highly he rates the experienced number 19. “Pablo makes the game more fluid. He has the skill to put the ball in the zone where it’s more difficult for the opponent to recover it. He has a very clear reading of the game and when you have games like this one, his calm and serenity help us a lot,” he gleamed.

Setting a brilliant example with his all-round exertions and hard work, both with and without the ball, he’s a fantastic embodiment of Bielsa’s system and a real leader for the many talented youngsters at Elland Road.

Holding up brilliantly to the rigours of the fiercely competitive Championship, Hernandez’s having an excellent season so far and if he can keep going at this rate, Leeds’ aspirations of securing promotion to the Premier League will be well on their way to becoming a reality. And wouldn’t that be the perfect reward for all his consistently excellent displays, dedication and commitment.