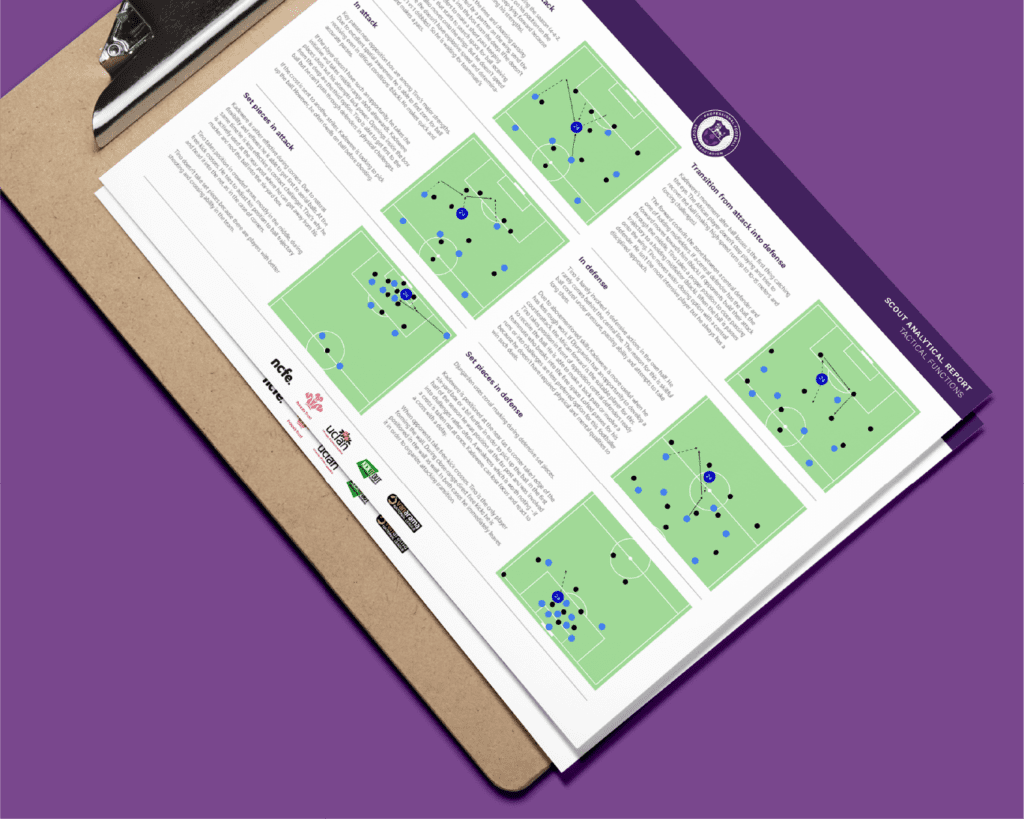 Report writing within opposition scouting is a skill in itself. Once you’ve completed your analysis and identified which pieces of information you want to highlight, getting that information from your own mind into the mind of your consumer is key. You can have the best information in the world however, if presented the wrong way, key messages can be lost; remember, a story is only as good as the person telling it! There are a number of ways we can compress our use of words and make messages stickier, these include: use of pictures, use of video, grading systems and key words. Each consumer will work in a different way; therefore, it’s always recommended to find out their preferred methods of consuming information when compiling your reports and summarising information.

There are various ‘football terms’ that have been used in the game for years. These can vary by individual but can often mean the same thing. If we take the ‘counter attack’, this is a great example of this. Many prefer using the word ‘transition’ these days which seems to have been influenced by the arrival of the various foreign coaches into UK football. Neither word is factually wrong or right but again it’s important to try to work in the language that your main consumer uses.

Key words can help us define specific moments of a team’s attacking or defending strategy (links to attacking and defending articles can be found here for further detail). If we consistently talk in terms of build-up/start of press, middle 1/3 / block defending or final 1/3 / defending the goal, it really helps specify areas on the pitch we are talking about. If we use key words (in conjunction with a structured report that works its way logically through the game phases), all of a sudden, we have a very clear story that’s digestible and simple for the reader. This is a vital part of report writing to ensure we say what we want to say.

Breaking a players’ ability down using the FA’s Four Corner Model is a good place to start in order to structure our analysis. If we talk through players physical, technical/tactical, social (less relevant in this instance) and psychological traits this helps add continuity in our reporting. We can then drill down further into more specific skills that fall under these headings. Not all of the headings will be relevant for every player in every report however, we can clearly start to build pictures on what’s been reported. For example:

Player A is fast, long passing is good, lacks composure and a decent finisher could become:

Just by adding a few terms or indicators, our analysis becomes a lot more detailed but remains concise.