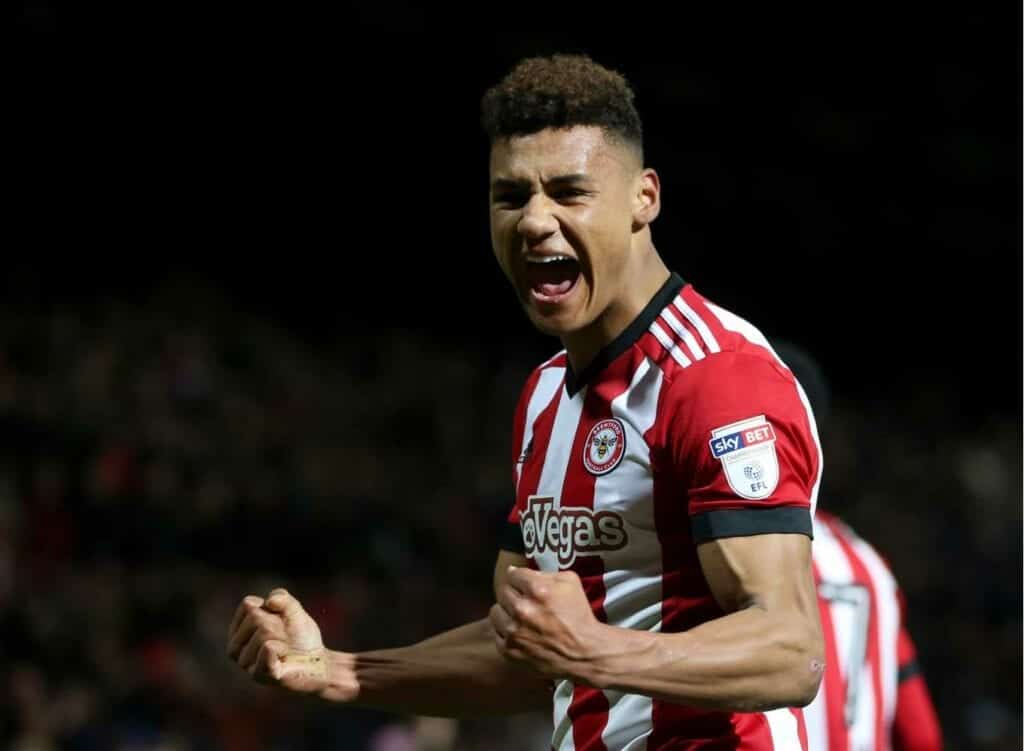 Starting the season in scintillating style for Brentford, it’s been impressive to see Ollie Watkins step into the striking role following Neal Maupay’s departure to Brighton and Hove Albion.

While Watkins, who’s been predominantly used as a winger, was himself planning on a move to the Premier League to join Crystal Palace in the summer, he’s quickly shifted his focus and been one of the stars of the Championship. Currently sitting second on the goalscoring charts on eight just behind Fulham’s Aleksandar Mitrovic, his form has been vital for the Bees, who have only managed a total of 15 goals all season.

Watkins gave an insight into how he’s refocused after his move failed to materialise and how he’s finding playing as a centre-forward when speaking to West London Sport. “I’m really happy here now and I think it really shows with the form I’m in and long may that continue. I’m feeling good,” he insisted. “I want to score as many goals as I can and help the team to win. I’m not setting any specific targets. I’m just trying to get in the box and get on the end of chances.

“I like central striker. As long as I’m not getting long balls down my throat all the time – no one likes that. But you’ve got to do the dirty side of it as well. As long as I’m getting chances I’m happy. Am I more suited to it? Yes and no. I like to be involved in the game a lot. Sometimes I get frustrated coming into feet but I think I’ve adapted quite well. Hopefully I can keep it up for the rest of the season.”

Possessing a dynamic skill set that places so much doubt in the mind of defenders and readily puts them on the back foot, Watkins’s athleticism, technique and clever movement have been key cornerstones behind his success.

To begin with his off the ball movement, and the 23-year-old’s been able to impact proceedings significantly with his aptitude in this regard. Instinctive inside the box and adept at tailoring his runs depending on where the ball holder is, he’s supplied his colleagues with a terrific option inside the area. Using some crafty double movements, zig zags, dummy runs and by exploiting the blindside of markers, he’s been a real handful to contain, for he’s so good at gaining crucial separation from his trackers. 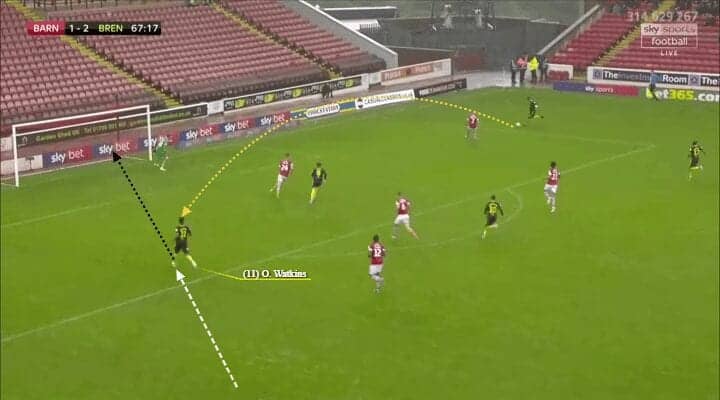 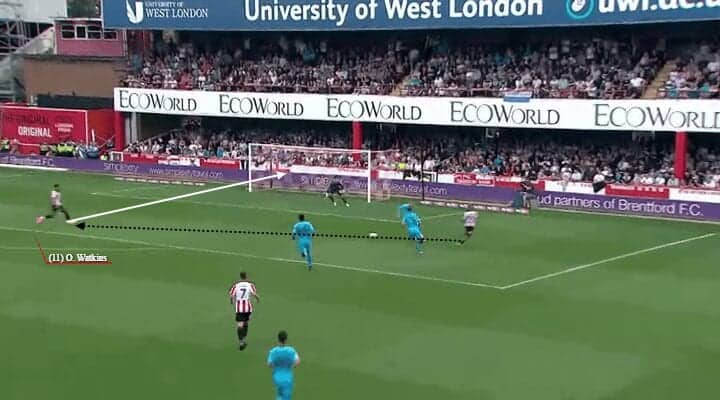 Supplementing the aforementioned with his ability to recalibrate his runs when he quickly picks up the ball’s velocity and trajectory, and it’s not hard to see why he’s been so lethal inside the box.

Watkins’ runs in behind during transition phases, plus in Brentford’s methodical build up, have been equally impactful, as he times and angles his runs astutely to exploit gaps between defenders. Whether it be taking advantage of the space between the central defenders and between central defenders and fullbacks, he’s done a fine job of exposing foes centrally and in the channels. Quick to recognise when an opponent steps out, has their attention drawn towards the ball and when they lose track of him, he’s proven to be quite elusive indeed, especially when peeling off the shoulder of the last defender. 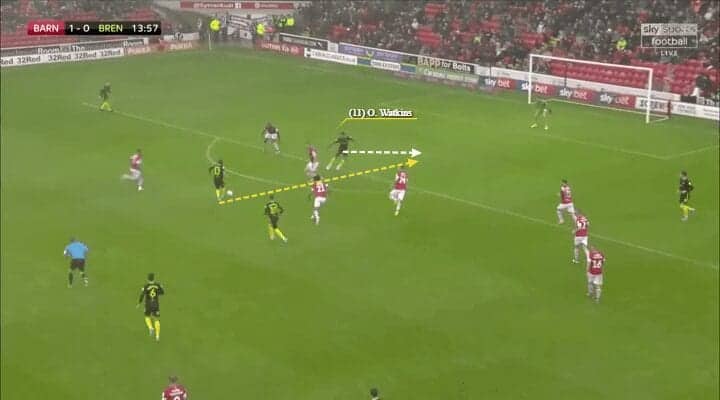 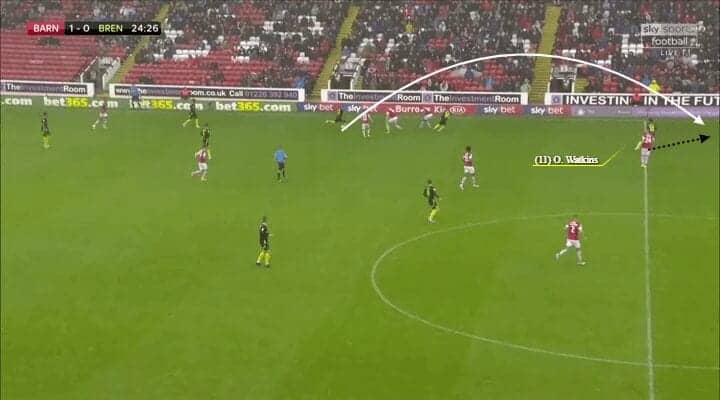 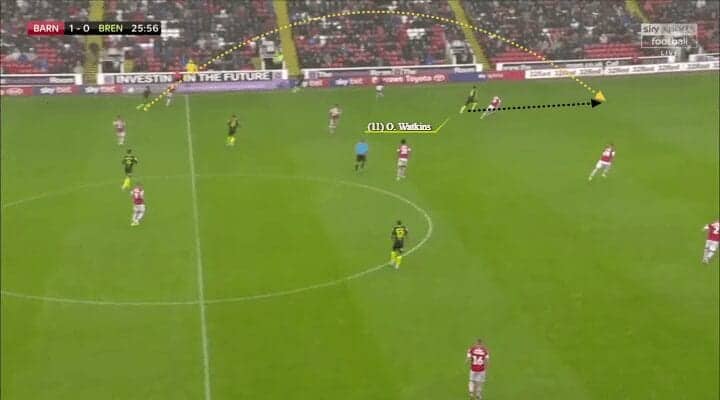 A key byproduct attached to his depth movement comes how it stretches backlines, opens passing lanes and pins and draws markers so they become out of shape, which can generate disconnects for others to use. 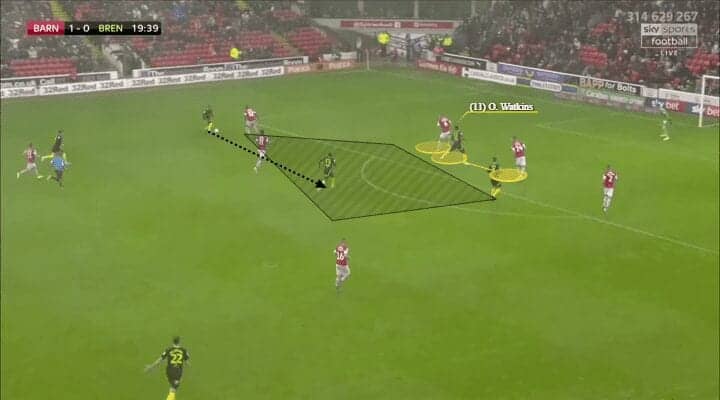 Also handy at dropping deep between the lines to link play with his back to goal, the former Exeter City starlet picks his moments coherently when to check deep. Reasonably strong and capable of holding his own in battles of strength, Watkins has allied the above with his technical qualities to be a proficient operator in such situations. 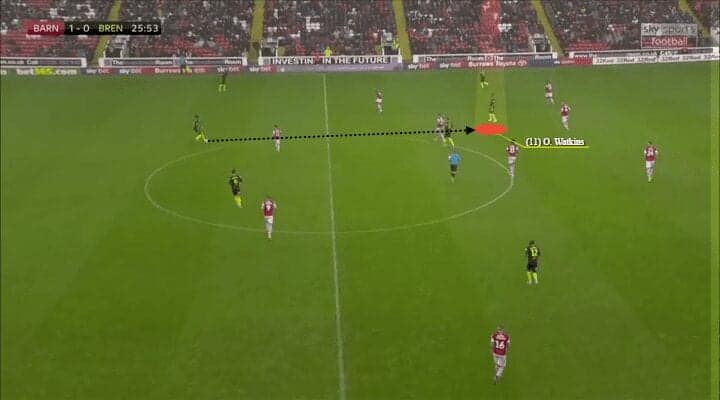 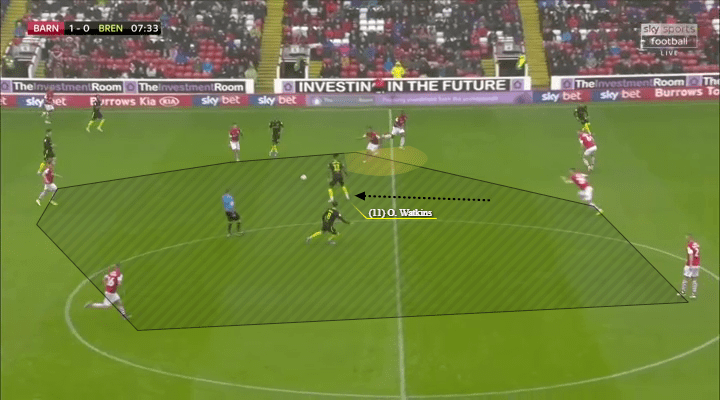 Although he occasionally loses possession, opponents have often been beaten by his tidy dribbling skills, sharp first touch and solid ball control. Twisting and turning out of trouble, plus using his agility and acceleration to outfox his markers, Watkins’ impact with the ball at his feet has been impressive.

Meanwhile, when it comes to his passing, the Englishman has performed admirably here too. Be it via his sublime back heels and flicks, wicked one-touch passing, sound crossing or incisive through balls, Watkins has been a key man in connecting and animating his team’s offensive phases. Moreover, the way he’s passed and moved to support attacks has only accentuated his worth in helping Brentford unlock stubborn backlines. 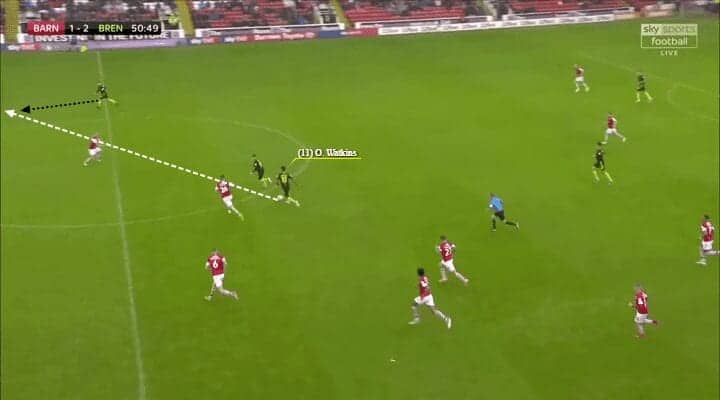 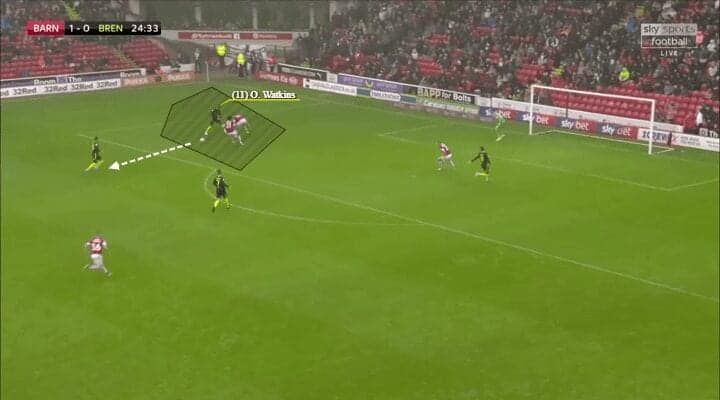 An imposing figure and a good presence up front, the 180 cm attacker’s competed manfully in aerial duels and offered a top target and reference point for his team. Aside from being an option in situations when Brentford can’t beat the press, where he’s been a nice outlet for an out ball, his aerial prowess was unquestionably best demonstrated by his hat trick vs. Barnsley, which saw him score all three goals with his head.

Finishing effectively so far and taking his chances clinically, Watkins is impressively averaging 0.55 goals per game this term from an XG of 0.45.

Being an indispensable driving force behind Brentford’s attacking work along with Said Benrahma, the multidimensional Watkins’ tremendous form has not only seen him attract Premier League interest again but also ensure Maupay’s loss hasn’t been felt too heavily.