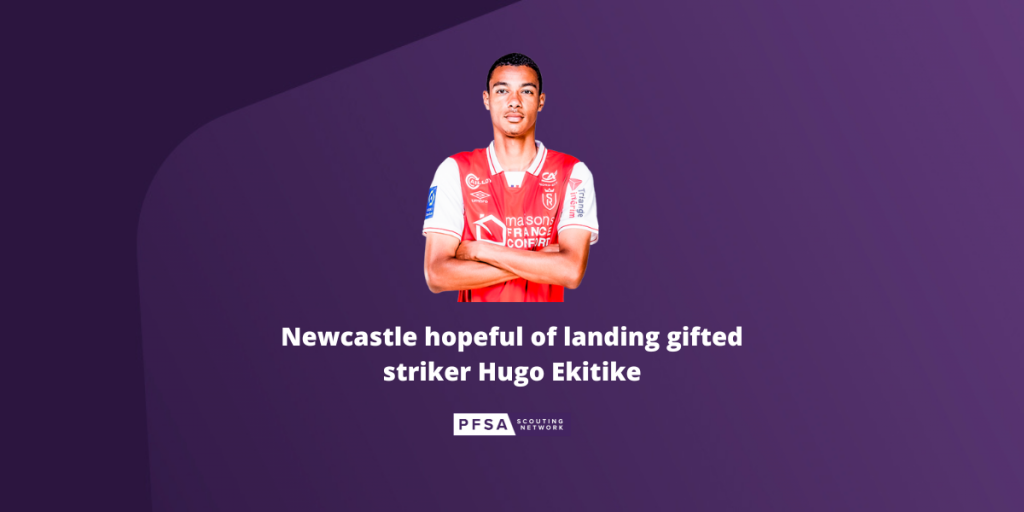 The chase for talented Reims striker, Hugo Ekitike, has intensified of late, with Real Madrid, Bayern Munich and Paris Saint-Germain reportedly joining the likes of Newcastle United, West Ham United and Everton in wanting to secure his services.

Although an initial transfer fee of £25.6 million has been agreed with Newcastle, negotiations haven’t been successful with the 20-year-old, thus leaving the door open for a host of extra clubs to join the hunt.

Fresh from completing his first full season at the professional level, he displayed what a tremendous prospect he is on his way to scoring 10 goals and supplying three assists in his 25 matches for Reims.

Adjusting wonderfully to the demands of Ligue 1, his progress has been nothing short of impressive, with the confident, ambitious starlet looking right at home at the senior level. Considering he missed 10 matches with a hamstring injury, this amplifies what a promising campaign he enjoyed.

Finding the back of the net against many quality teams such as Rennes, Nantes (twice), Strasbourg, Lyon, Marseille and Nice, Ekitike certainly wasn’t intimidated by anyone.

Whether it be opening up his body to place his finishes, lashing his efforts with power, reacting rapidly to rebounds, dinking the keeper, holding his nerve in 1v1s, striking first time efforts or using his legs to stretch out, there’s been much to admire about his finishing. 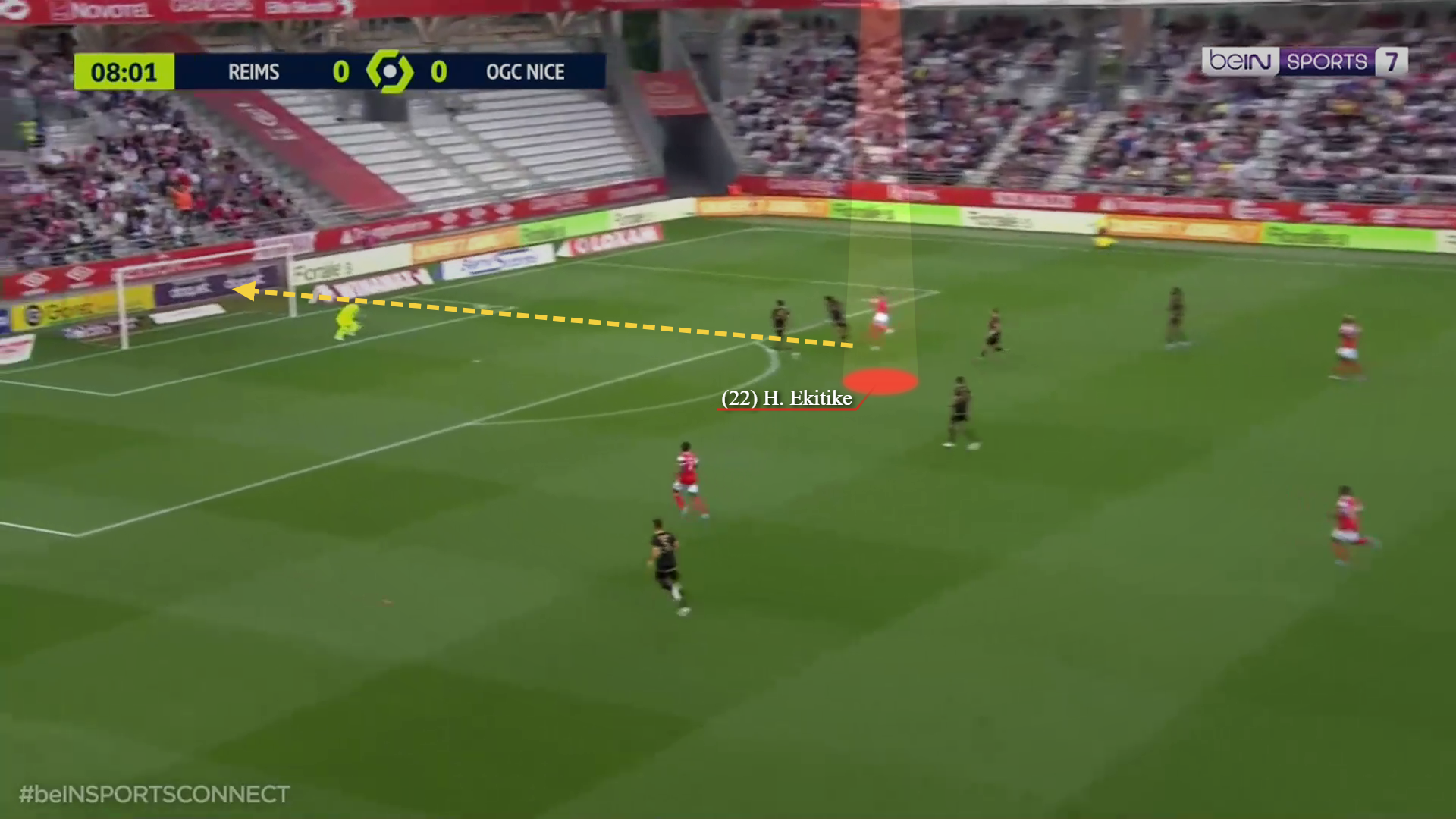 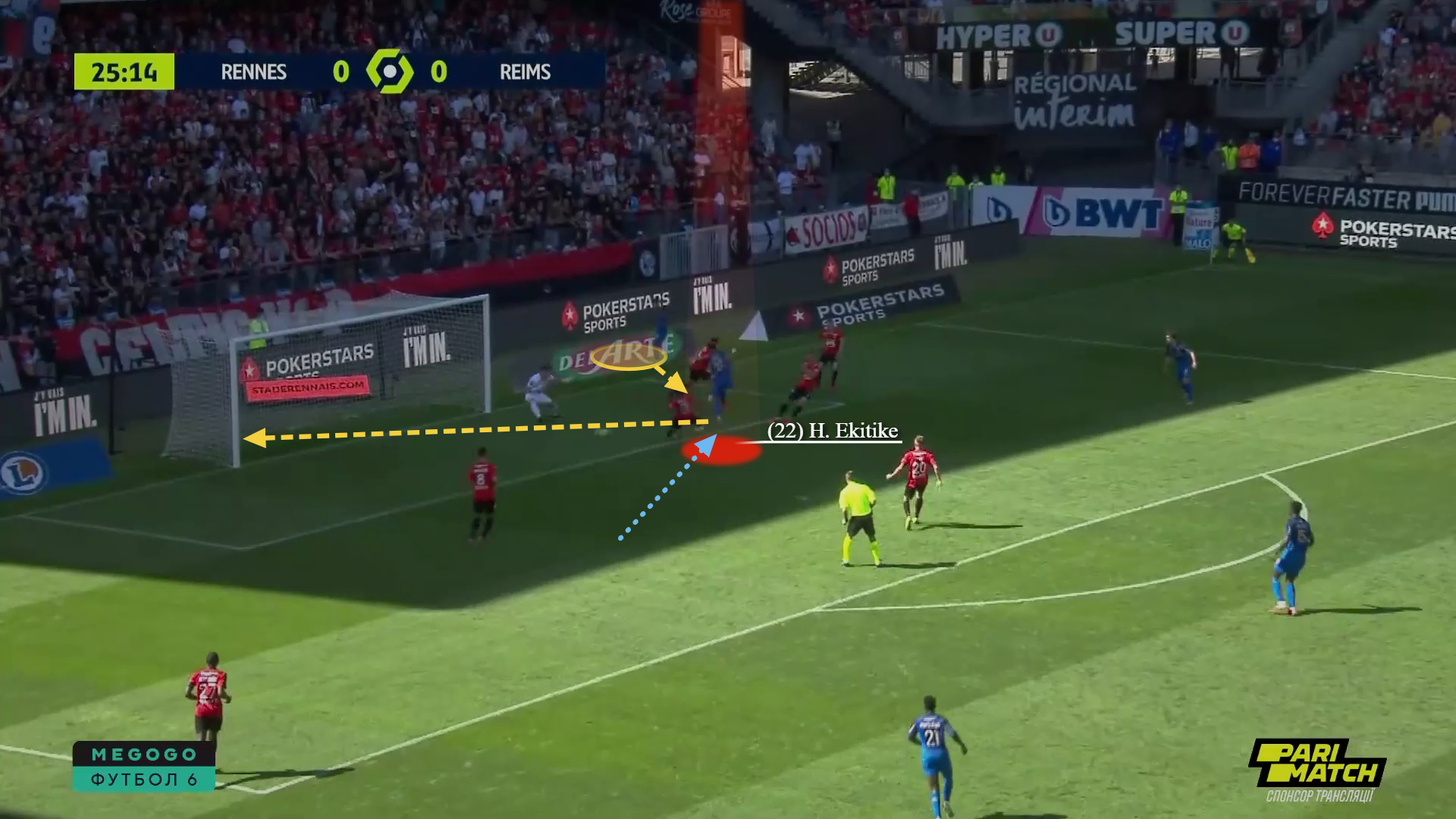 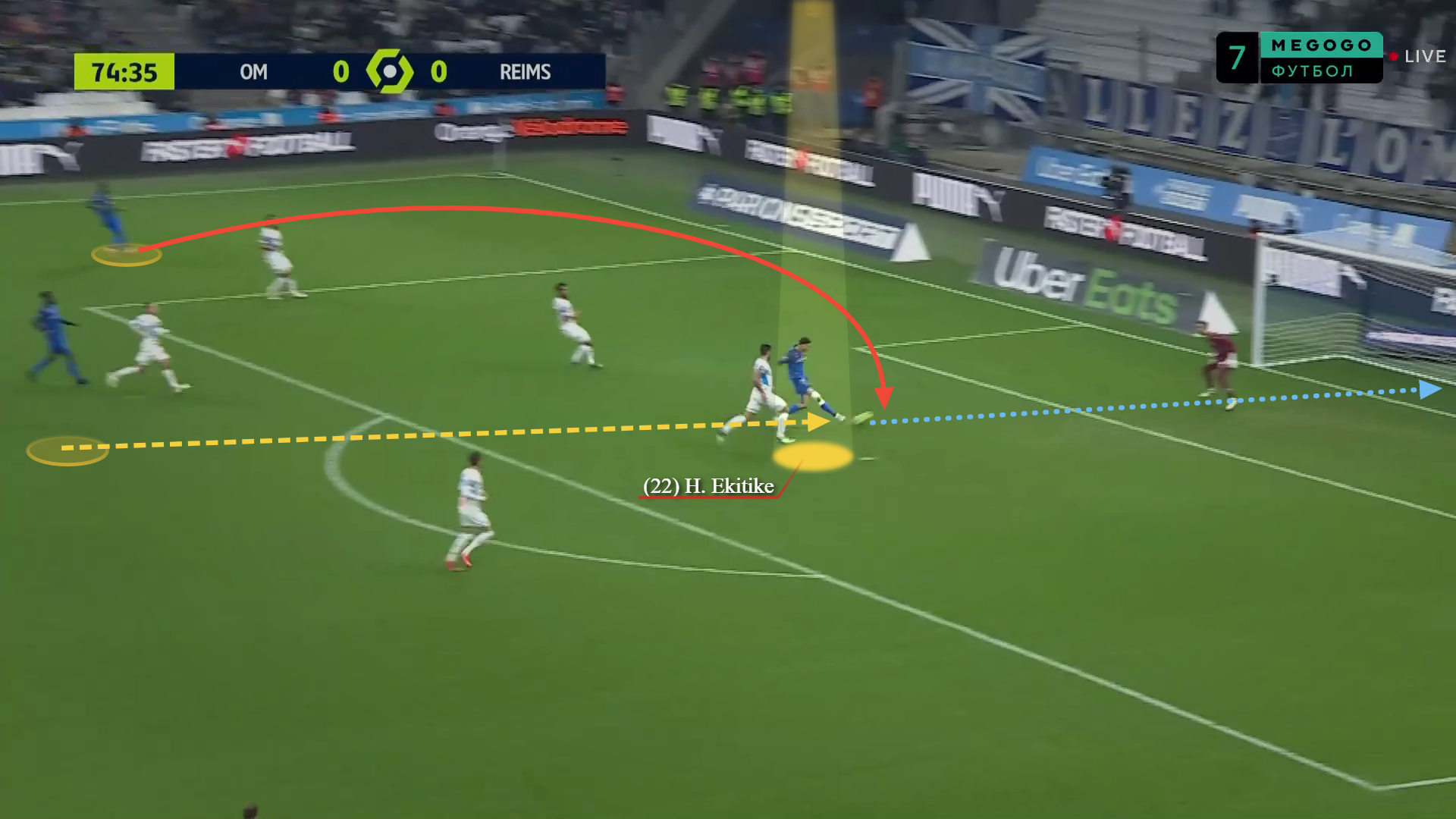 Already composed, instinctive and clinical, his aerial prowess enhances his threat, for he can power and glance headers on net. Sharp at picking up the ball’s trajectory and pace, in combination with his height, leap and how he sets himself, this compounds issues for his markers.

Intelligent with his movement and awake to gaps in the opposition backline, he astutely takes advantage of openings using his scorching pace and run timing. A master at attacking spaces in behind, down the channels and inside the area, Ekitike smartly pounces upon seeing a teammate in position to find him and when he can exploit vacant zones. Alert to gaps between defenders, when defenders are ball watching or preoccupied with an assignment and when a colleague has created room for him, he’ll smartly get on his bike to be an outlet once seeing these triggers. 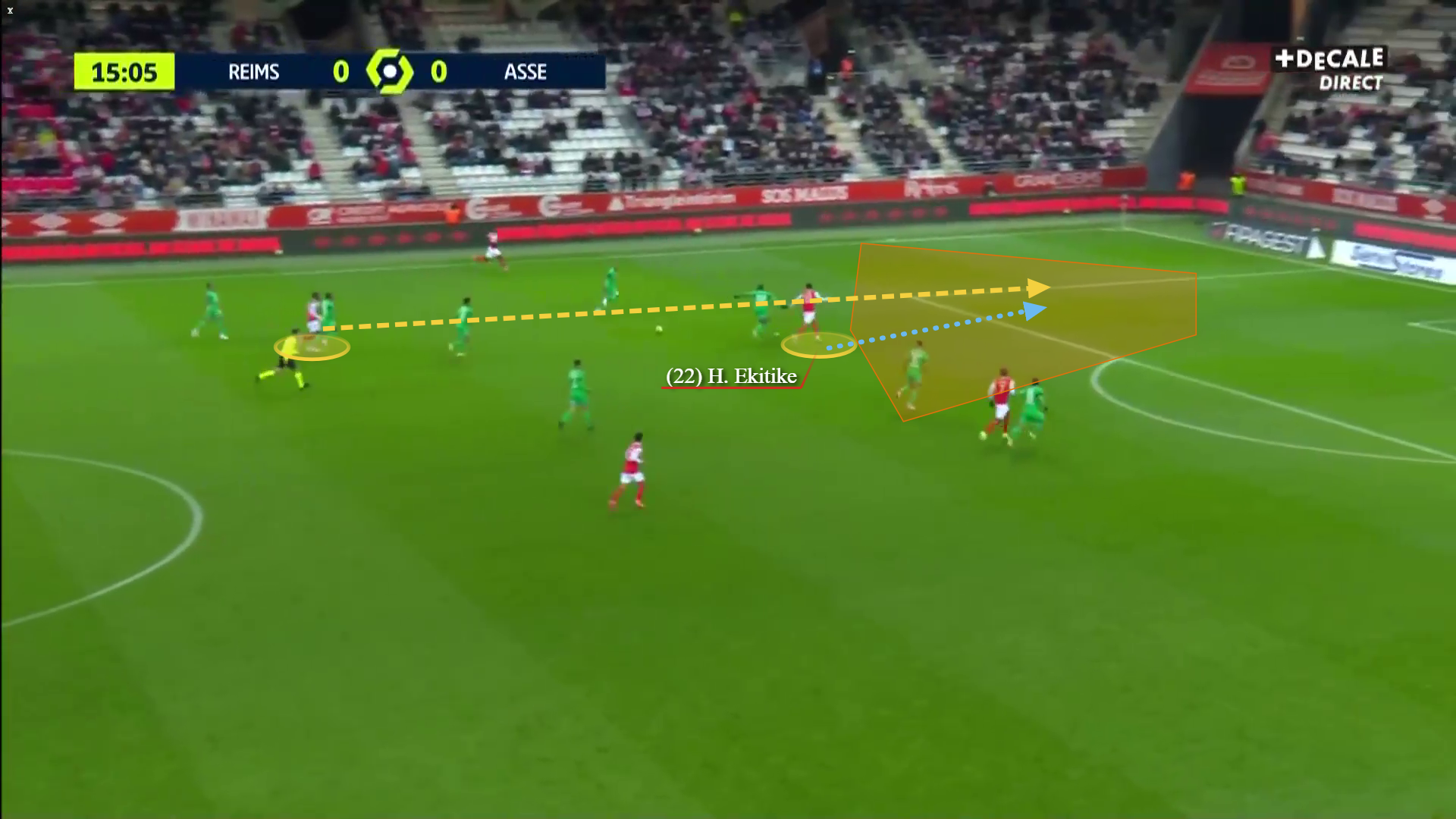 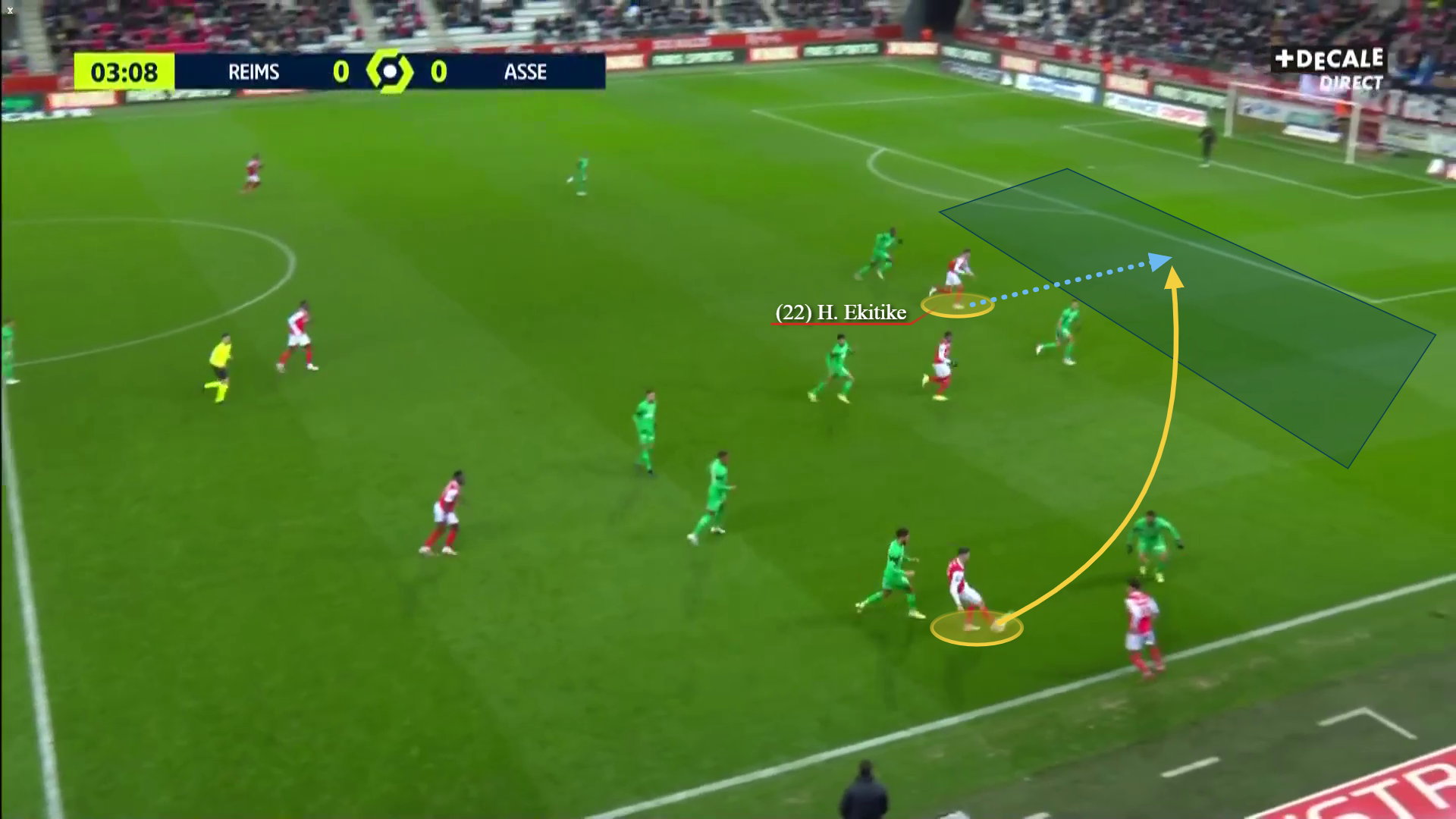 Moreover, his pace enables him to start his runs away from ball facing markers so they can’t impede his momentum, meaning he can use his dynamic advantage to latch onto through balls first.

Being able to peel off the back shoulder of his man and expose them on their blindside, plus use zig zags and double movements, has amplified his menace to break free from his trackers.

By assessing his surroundings coherently and knowing where teammates and opponents are positioned also sees him do a neat job of dropping deep to link play and draw players to make space for colleagues. 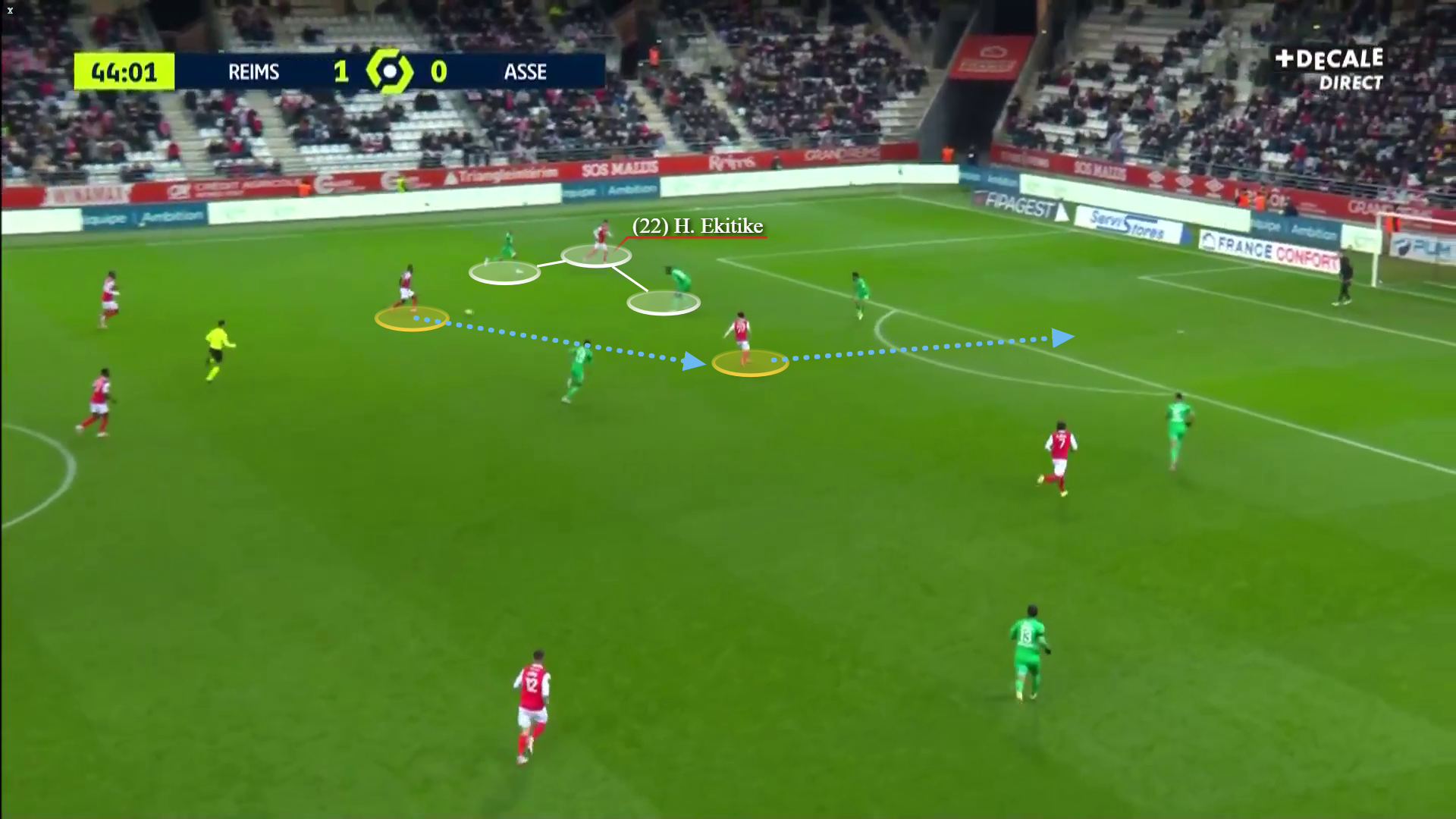 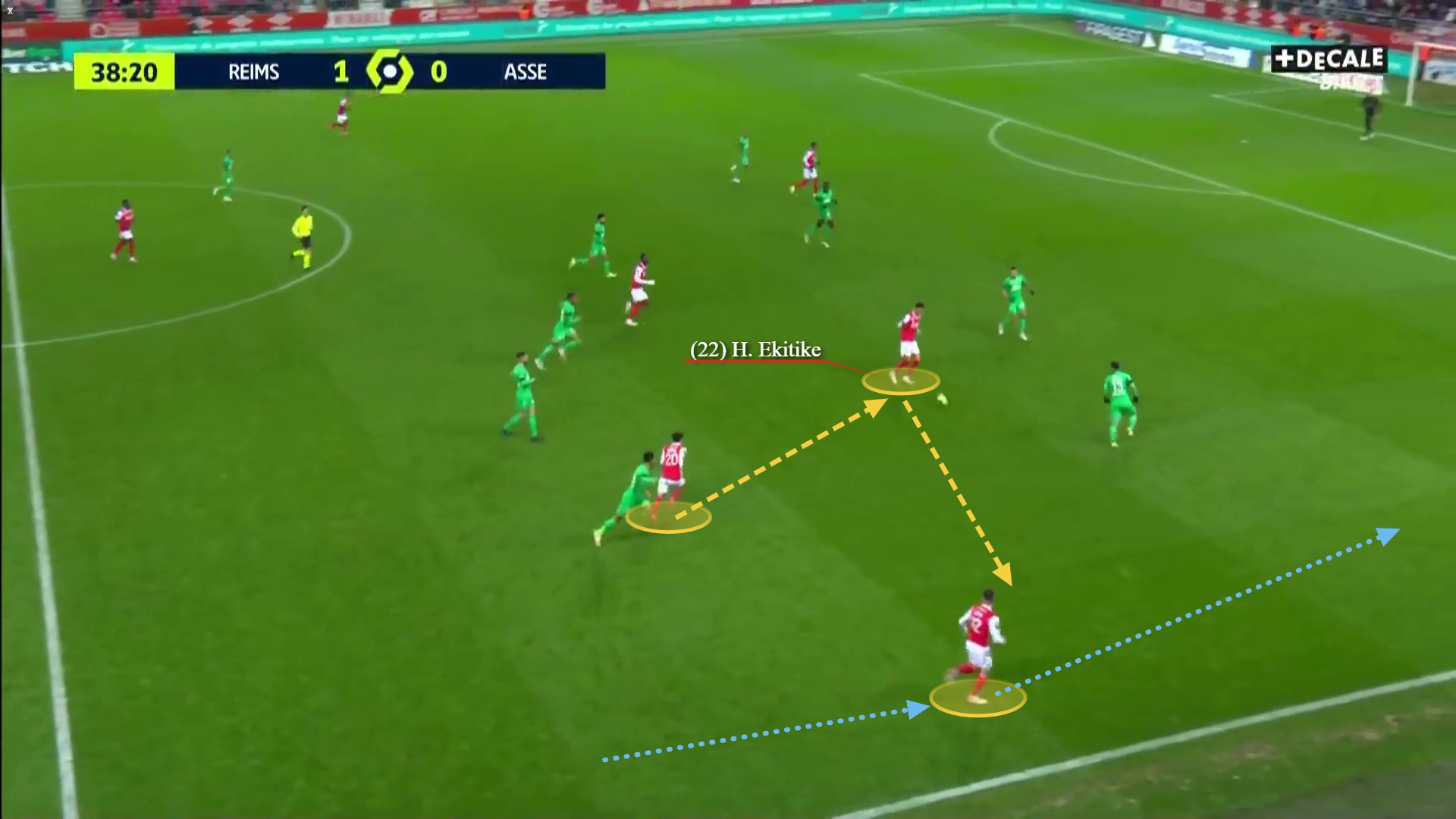 Upon switching the focus to his work with the ball at his feet, and he holds his own here too. A dangerous dribbler and ball carrier, opponents find him tough to contain due to his awkward languid style, aforementioned pace, wicked alterations in speed and direction, sharp cuts infield, slick shimmies and crafty twists and turns. How he holds off defenders with his arms and uses his long legs to keep foes at a distance adds to his effectiveness.

Being so swift across the turf is a huge asset when gaining territory on the counter attack against backpedalling backlines who know they can’t overcommit or risk being punished.

Fast of feet and mind, another important string to his bow is his ability to manufacture chances for teammates with his passing. Always keeping an eye out for runners and comrades in dangerous positions, he duly obliges them with some tidy through balls, crosses, cutbacks and one touch layoffs and flicks. Even though he can turn the ball over at times going for high risk, high reward progressive passes, the positives far outweigh the negatives here. 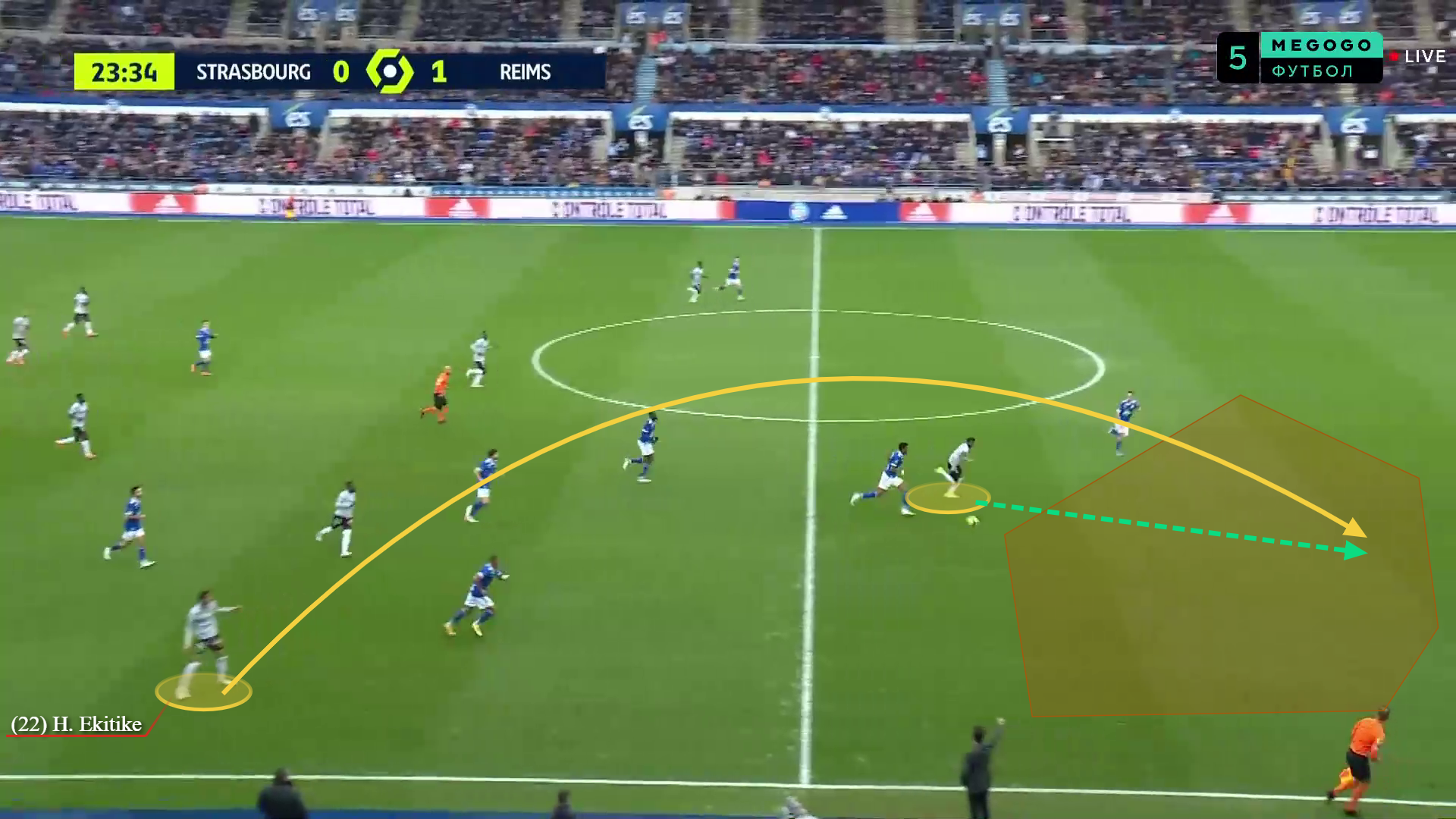 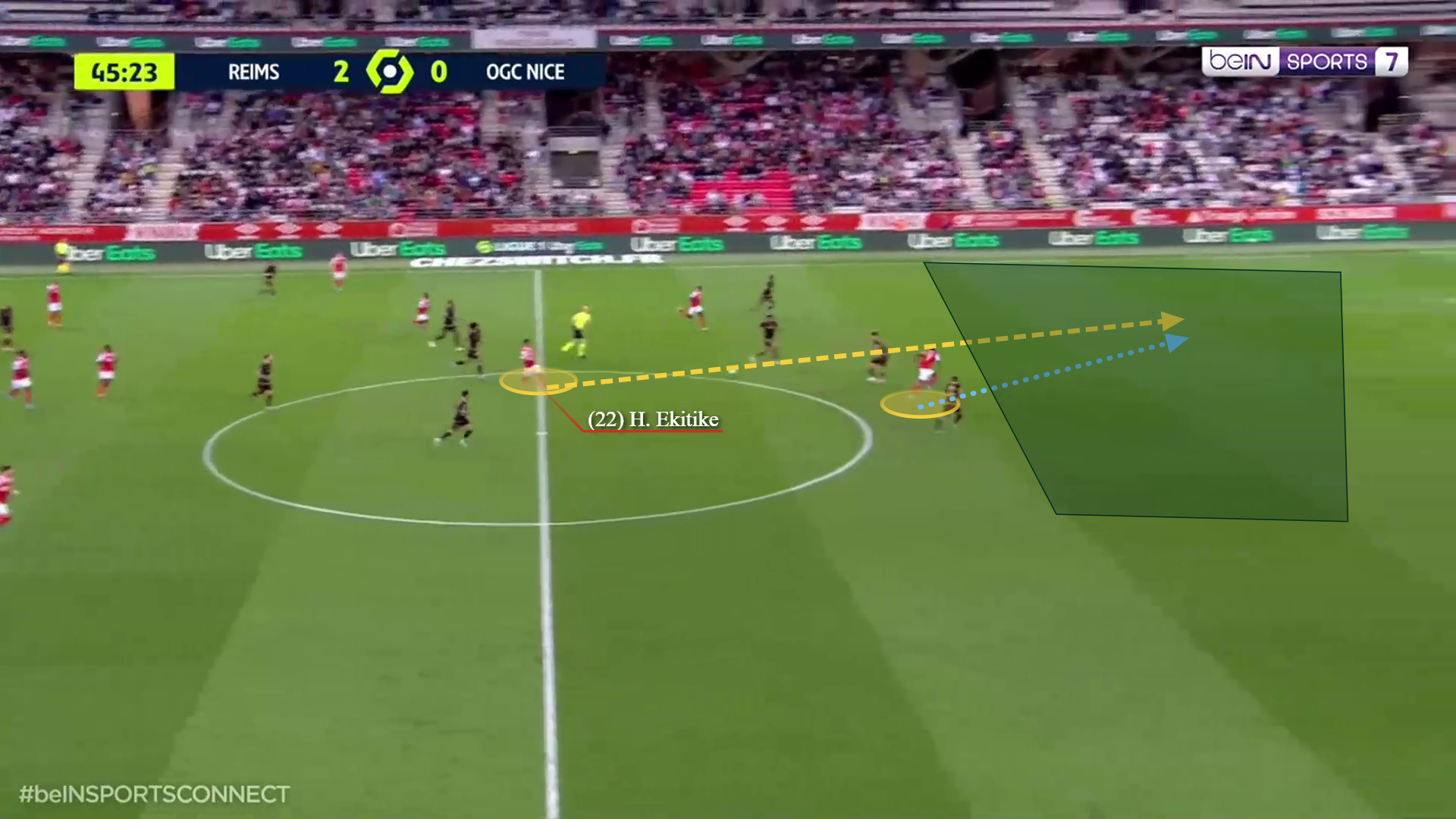 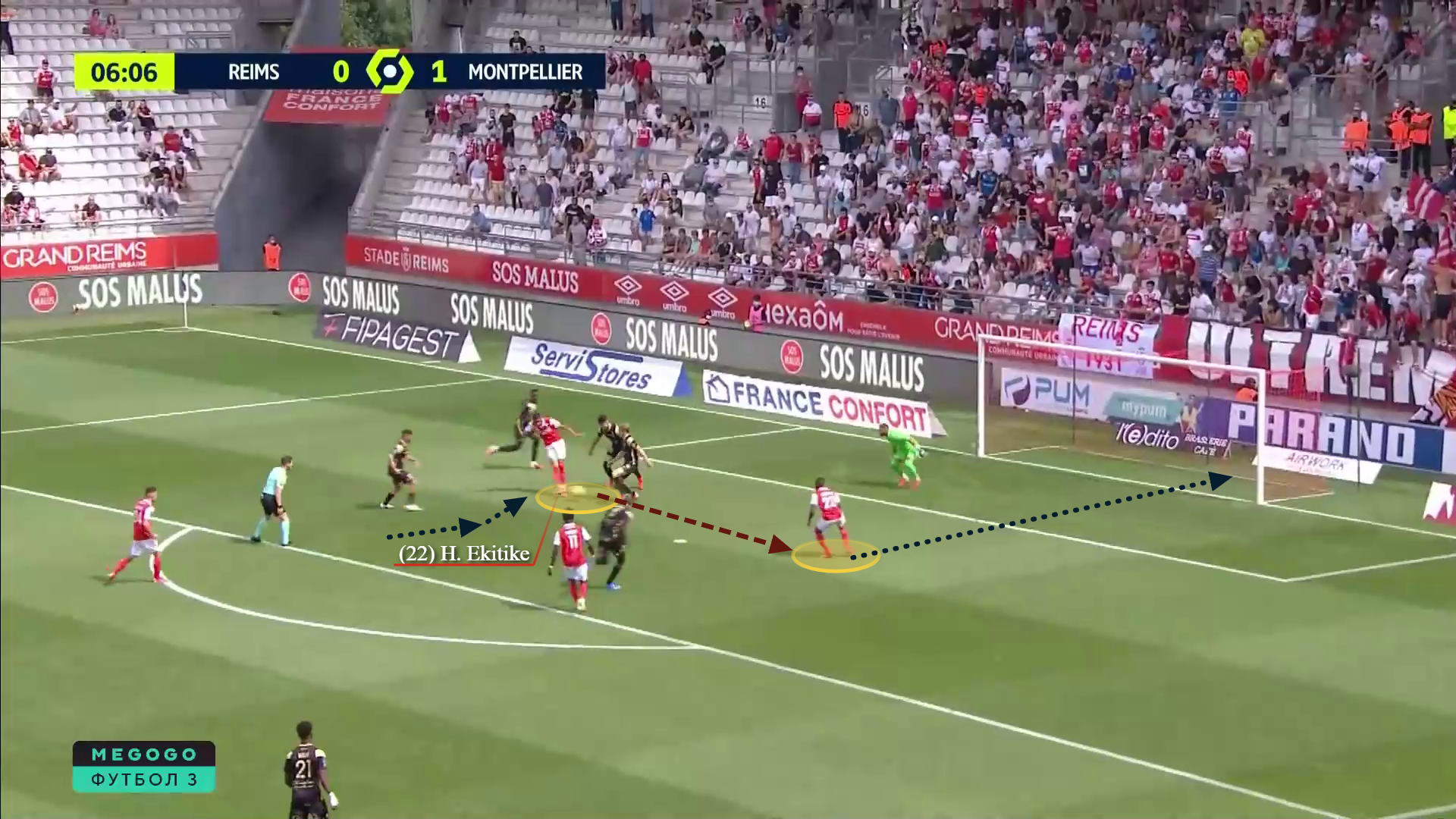 “Players like him don’t run the streets. They are modern player profiles, with an ability to eliminate opponents and use their quickness despite their size. They have a velocity/size ratio that is rare,” explained a Ligue 1 scout to L’Equipe.

“So inevitably, this type of player is very sought after, despite gaps in their game that are still understandable.”

When asked if his slender 191cm frame hinders him in the senior ranks, he responded insightfully, stating that he actually uses it to his favour.  “I wouldn’t change it for anything in the world. It allows me to run fast, to hold my own in duels. I have stamina, I’m technical and I have a very good understanding of the game. I have to improve. But I want to get closer to perfection, to touch it, why not. I’m not afraid of anything,” he insisted.

Set for an exceptional future and with still such huge scope for improvement, it’s little wonder a plethora of quality clubs are vying for his signature.

The challenge will now be weighing up which club is the best fit for him, so he can continue along in his quest to fulfil his tremendous potential in order to become one of the premier strikers in Europe.