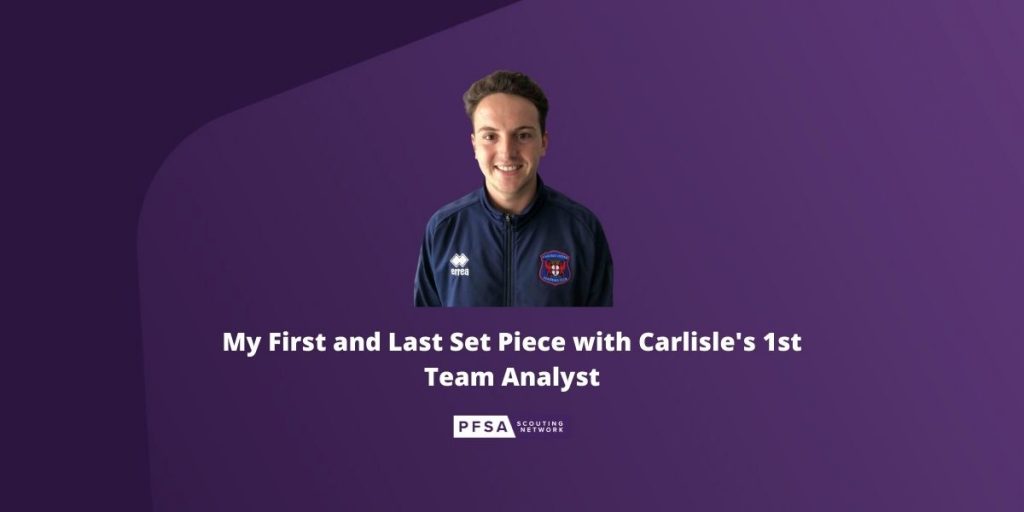 There are many ways to learn. The most popular one being on the job with very little guidance offered.

For Carlisle First-Team Analyst Jacob Blain his first experience of analysing defensive set-ups from free-kicks was not the familiar case of being thrown in at the deep end, though he would have welcomed that opportunity with open arms.

Jacob was in his first paid role as Academy Analyst at Middlesbrough.

An opportunity which he firmly believes shows the value of work experience placements, having done a one-week work shadowing at Blackburn while studying at Northumbria University.

The person he worked under at Blackburn then moved to Middlesbrough, so when Jacob sent his CV to the Riverside… well you connect the dots.

His interest in set-piece analysis was already strong when as a CPD exercise, Jacob was asked to look into which types of defensive set-ups a set-pieces offer up the most goalscoring opportunities.

So his first piece of opposition analysis on how a team defends free-kicks did not zero in on one team. In fact it focused on data and video evidence from two leagues – the Premier Division and Championship.

Jacob explained: “At Middlesbrough, when I was anAcademy analyst, each person in the department had an area where they would deliver a CPD to other members of staff.

“We’d have departmental meetings every month or six weeks.

“Set-pieces are something I have always had an interest in as I think it is something that can give a team an edge.

“I started digging into the deep details of set-pieces. I firstly used to code all of the set-piece goals from the Premier League and Championship.

“I’d code them using my own window, which consisted of short or long, quick or delivered, where was the first point of contact, whether it was near post, centre of the goal, far post or a shot.

“I would dig further into it with types of marking, size of the walls and so on.

“So it started as a project to see if teams conceded more from marking zonally or man marking.

“It did really help as the outcome was the more successful defensive set-up was the hybrid between zonal and man-marking.

“That was my first experience and from looking into the data from Statsbomb from digging into that and I read a lot into Ted Knutson’s work from when he was a Midtjylland and Brentford on his blog.

“The general idea of it was to be more innovative with set-pieces. So we would log any inventive routines we had seen. We were building a best practice library.

“From the point of view of coding, it was to see if there was a trend in where goals were being scored from.

“We looked at it from an attacking point of view to start with before we started to look at how they were defending.

“This was a league-wide thing, it was not as an opposition analysis of a particular opponent, it was more of a study to get an insight.

“Now that I am working at first-team level, we will dig further into the details to exploit any weakness they have got.”

As mentioned earlier, Jacob’s move into analysis began while at the Northumbria University, where he also enjoyed an internship at Newcastle United for the 2016-17 season.

He was at Middlesbrough for just over two years before he joined Carlisle just before Christmas 2019.

Jacob recalled: “When the job at Carlisle came up, I was really keen because it is where I am from.

“I saw it as a good chance to progress because it was with the first-team. I like the idea of havin that extra importance of getting the three points in every game.

“They did not have an analysis previously but they have been really supportive in helping me set up the analysis at the club.

“I do all the opposition stuff, all the match-day analysis as well, filming and coding the game. From that you can do the post-match and pre-match analysis. I help out with all the recruitment as well, so I spend a lot of time doing reports and player profiles from video.”

The early end of the 2019-20 season meant that Jacob’s last piece of analysis on a team defending a free-kick was for Newport County.

He works on a cycle of being a week in advance, so that the day after the previous game to Newport he can start showing the coaches at Carlisle the clips he has picked out and they can decide which they want to focus on in their preparations.

Jacob explained:  “I download both broadcast and wide angle footage. I will code them using Sportscode.

“I code all the key events. Opposition chances for both teams, opposition entries. I code any chances, subs, and incidents, obviously goals, key events, corners and of course free-kicks.

“Once everything is coded I will go through it as a coaching staff and the manager will suggest which clips he likes and I can log that into a library ready to go in the pre-match.

“After that we go into the greater detail of how we are going to exploit certain aspects.”

For most match events Jacob normally reviews the previous five games of each opponent. When it comes to specifically analyse how they set up to defend free-kicks, it means occasionally delving deeper into the archives to get a decent sample size to work from.

He added: “If there are not many examples of a particular free-kick, say a free-kick from a shooting position then that is where Wyscout comes in to play and we can go on there and find the best examples from this season.

“We wouldn’t really look at free-kicks from their own half unless they built up from there to create a goalscoring opportunity. We focus on the ones in and around the box.

“In terms of analysing Newport, when analysing the defensive pieces I look at how they marked, who picked up who. To be fair not many teams in League Two zonal mark, if any.

“I got an idea of who will likely be man-marking depending on how many players the attacking team put in the box against them.

“We get all the heights of the players. So you can start to look at how to stop the taller, more dominant aerial players.

“All the obvious stuff we look at. How many men they put in a wall, does the wall jump or not. Is it a tall wall? Do they put a man behind the wall doing a long barrier? All of that detail we cover.”

Once all the detail and video has been sourced it is a case of packaging it all together for the pre-match presentation to the players. Jacob is keen on keeping clips short and to the point, with a preference for the wide-angle shots which he believes helps maintain the focus of all the players in the room, as it is key to not what the opposition is doing in terms of potential transition dangers as well as any weakness in defending a free-kick around the penalty area.

He said: “When I do the opposition report and do a lot on set-pieces because they are  a key part of play in League Two.

“With the presentation it depends on the manager’s preference. When we go through the clips, I prefer the wide angle as you can see so much more from that.

“So with a really zoomed out clip, the lads who would stay back for example get an idea of the movement of the players the opposition leave up.

“With the more zoomed in footage, the lads not involved in the box might switch off at that point so you want to keep it all inclusive, keep everyone involved.

“To do that I like to keep the clips short so that it is to the point, so the lads have clear ideas in their minds of what they will come up against when they go onto the pitch.”