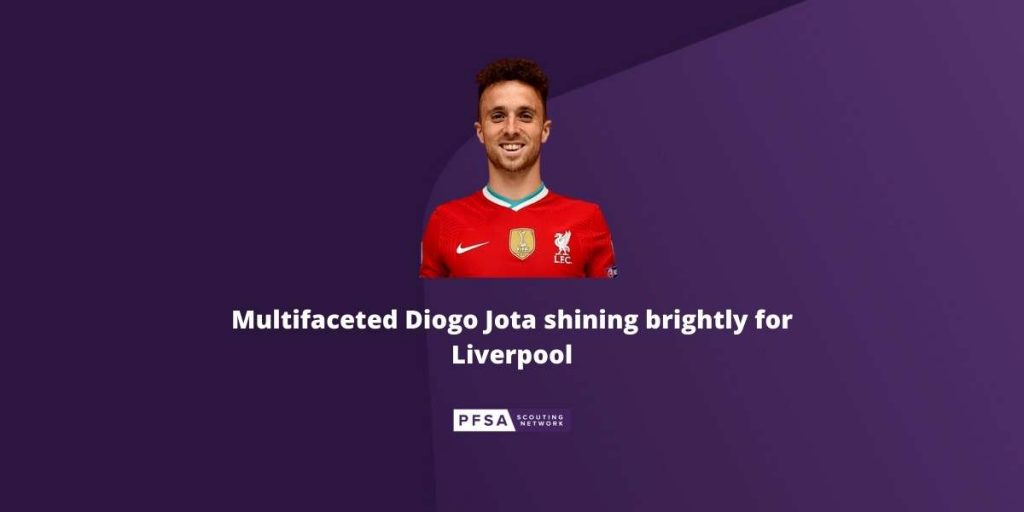 In sparkling form this season for Liverpool, Diogo Jota’s proven precisely why he’s one of the most talented attackers in the Premier League.

Having already scored 12 goals and supplied two assists in all competitions this campaign, the Portuguese maestro has been in sterling form. Currently ranked second in the Premier League Golden Boot race on 10 behind only superstar teammate Mohamed Salah (16), this is a further testament to what a superb start to the season he’s enjoyed.

Providing such a huge threat, it’s been a joy to watch Jota wreaking havoc in a multitude of ways. To begin with his movement, and he’s a wizard at finding space in front of, in behind and between defensive lines to ensure defenders are posed with dilemmas constantly.

Always on the lookout for spaces to exploit in behind, the buzzing forward keeps an eagle eye out for when spaces between markers open up or if a defender is preoccupied or ball watching. Upon noticing if a teammate is in a position to find him, he’ll then cleverly angle or curve his run to not only gain separation to latch onto passes but also to remain onside. 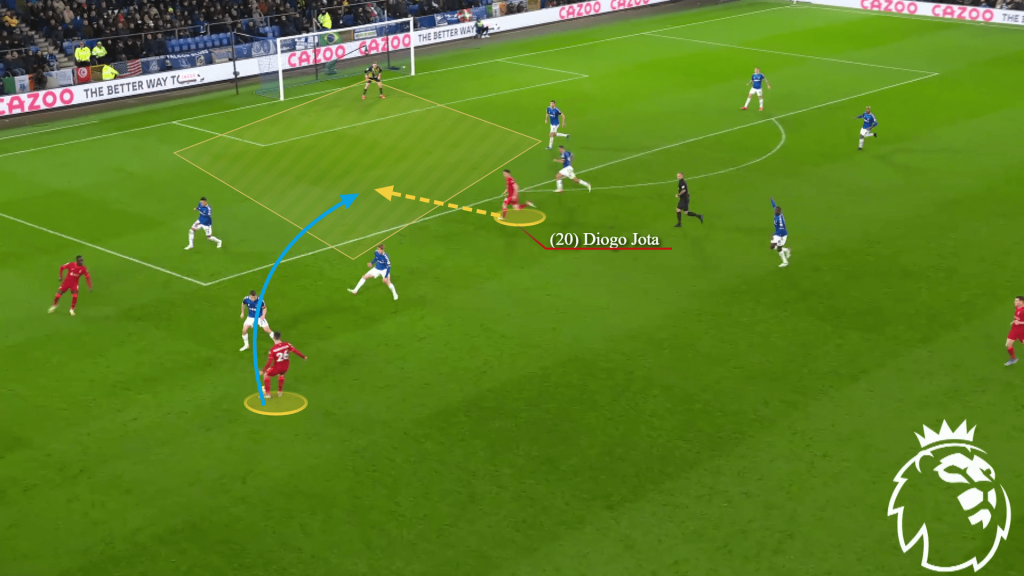 How he assesses his surroundings thoroughly means he’s effective at finding room inside the box too, as he smartly evades markers to get goalside, attack the blindside, peel off markers as the defence drops deep and exploit space that teammates generate by pinning markers. 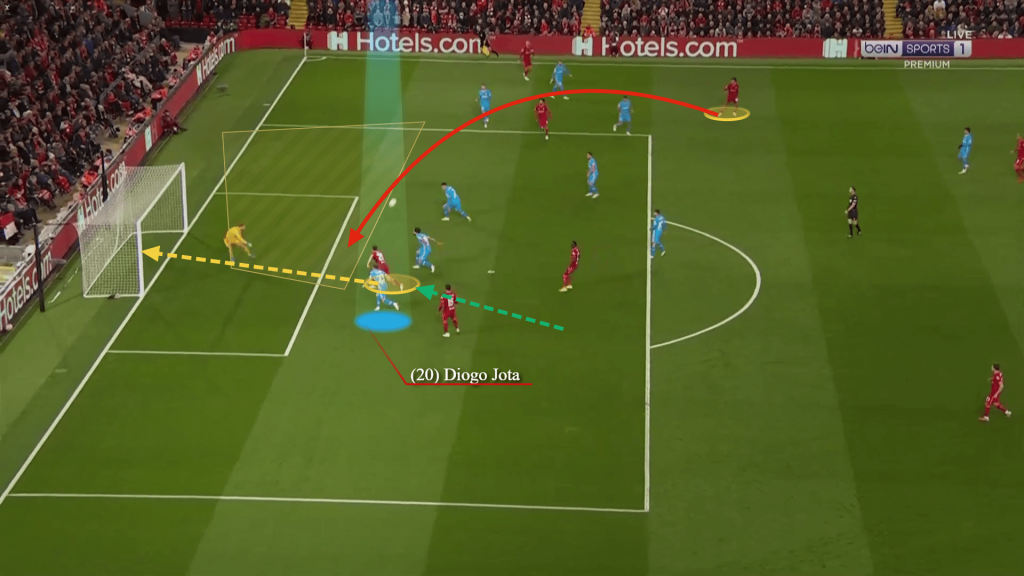 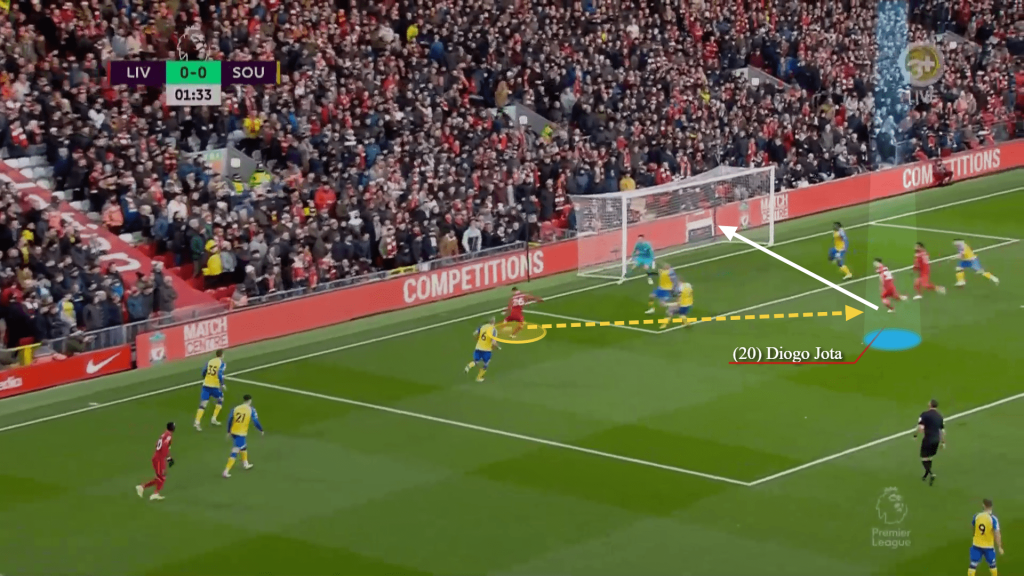 The Portuguese international crucially creates space and opens passing lanes for others too by drawing or occupying adversaries.

The fact he’s so fast and has wicked acceleration compounds issues for his foes, who struggle to make up ground once he gets the jump on them. The way he uses dismarking maneuvers like zig zags and stop gos adds to his menace.

When it comes to dropping deep to get on the ball between the lines or forming overloads in midfield, he’s been very effective at doing so. Picking his moments when to check towards the ball to be an outlet, this poses dilemmas for defenders whether to follow him or hold their shape, which often leaves him free to connect play or turn and dribble.

Often when a tracker follows him deep, Salah or Sadio Mane will immediately attack the space left behind, with these opposite movements bearing fruit on many occasions. 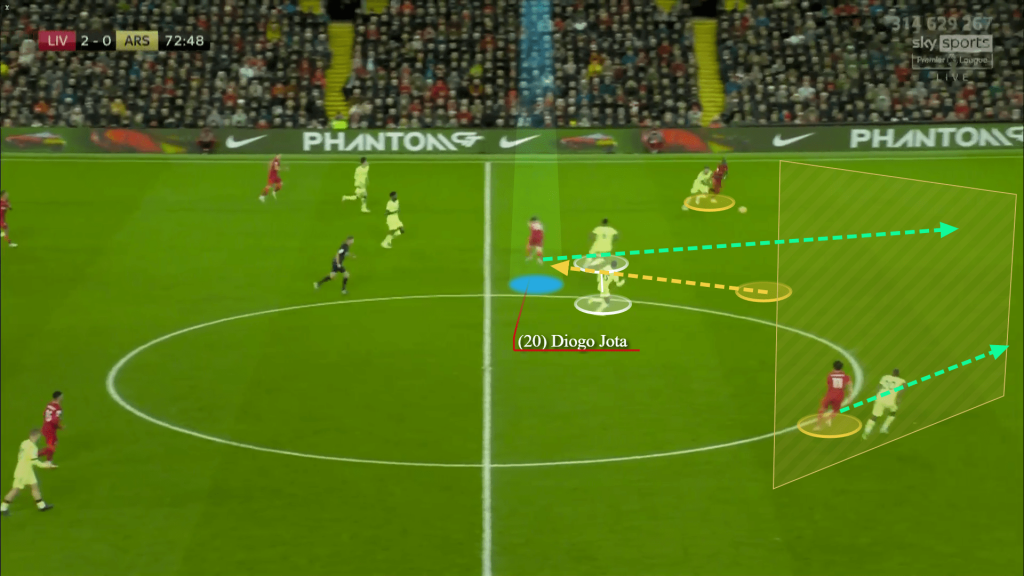 Rotating crisply with his fellow frontmen, central midfielders or fullbacks, this is another valuable string to his bow. Possessing a fine understanding with his colleagues, they frequently interchange roles so as to never let their opponents settle into a rhythm and to disrupt their organisation. Executing these switches so coherently from his usual centre forward role and when out wide, Jota is clearly right in tune with his colleagues and his manager’s demands.

A very adept finisher, his positional awareness and movement are essential towards him consistently getting on the scoresheet. Reading the play and the ball flight smoothly, he’s regularly in the right place to get shots on goal. Indeed, his shot map below highlights how a large portion of his shots are from ideal central locations, which owes much to his capacity to get into advantageous zones inside the box. 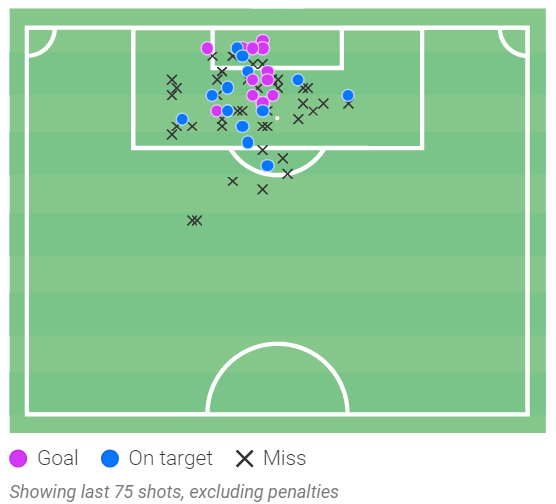 Able to find the net with either foot and from headers despite standing an average 1.78cm, plus with power, fitness or placement, the instinctive Jota is a handful when he gets within range. 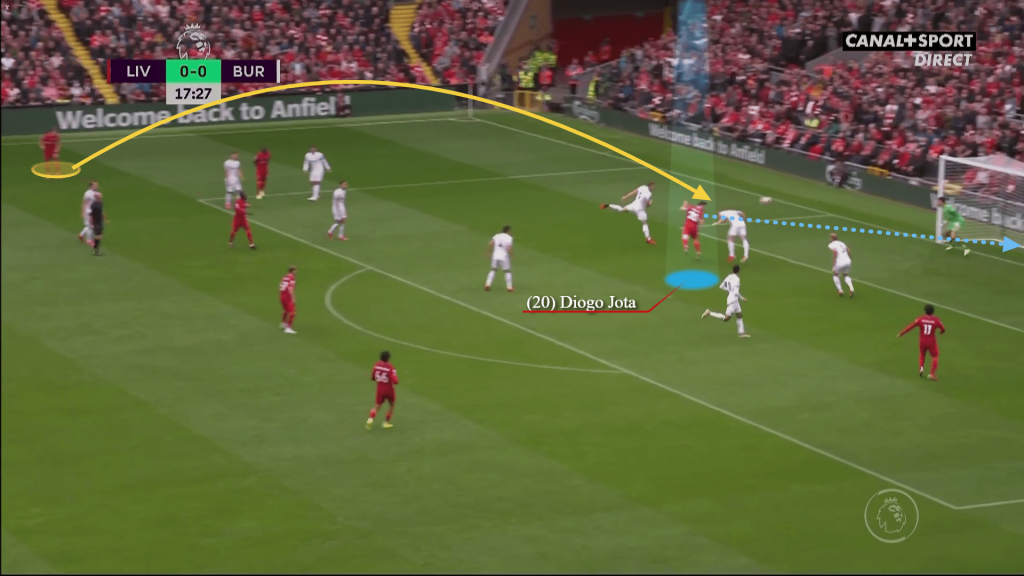 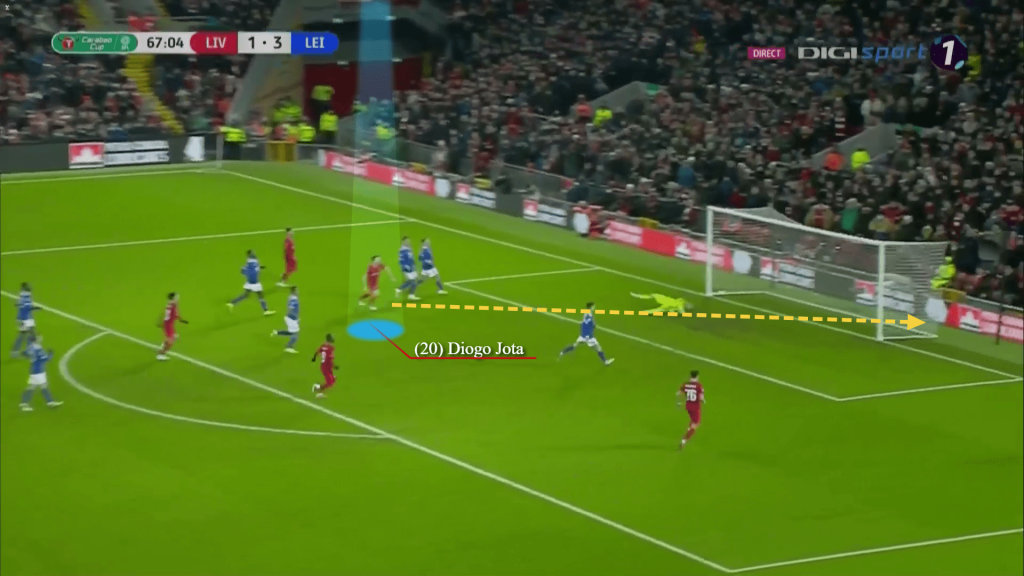 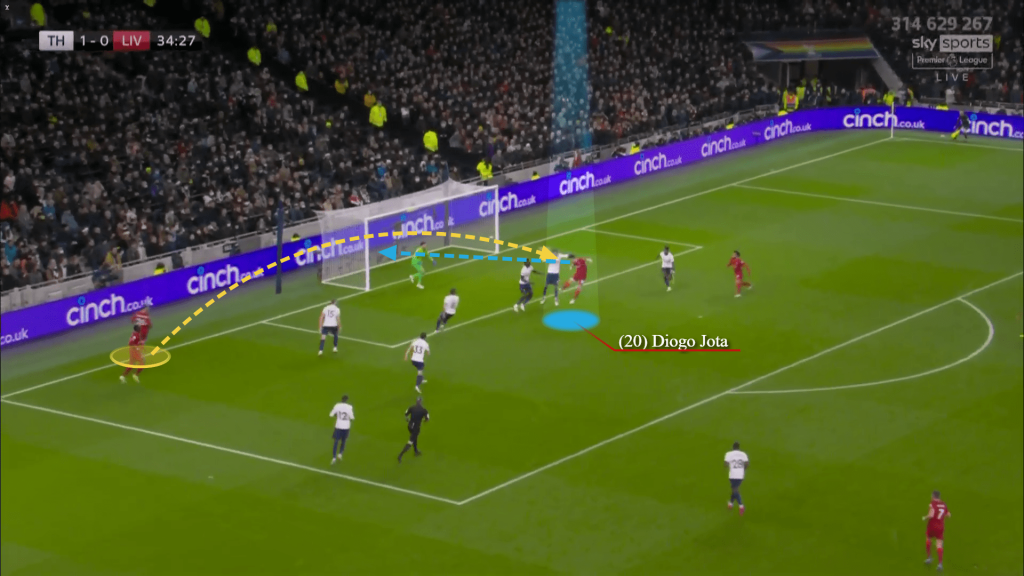 Neat and tidy on the ball, not only can he beat opponents with speed and skill, but he can also hold the ball up expertly while waiting for an option. Using his sound first touch and ball control, in combination with his strength and low centre of gravity, ensures he remains balanced or wins fouls in key areas due to stoppers getting frustrated.

Resistant to pressure, good at drawing multiple markers, capable of breezing by foes and awake to pressure, his ball carrying has certainly been an asset for the Reds.

Meanwhile, when it comes to his passing, the former Wolverhampton Wanderers sensation has contributed admirably here as well. Be it engaging in slick interplay in and around the final third, playing in colleagues with crafty through balls, whipping in mean crosses, breaking the lines or recycling possession, Jota’s been able to animate and help give his team control in possession. 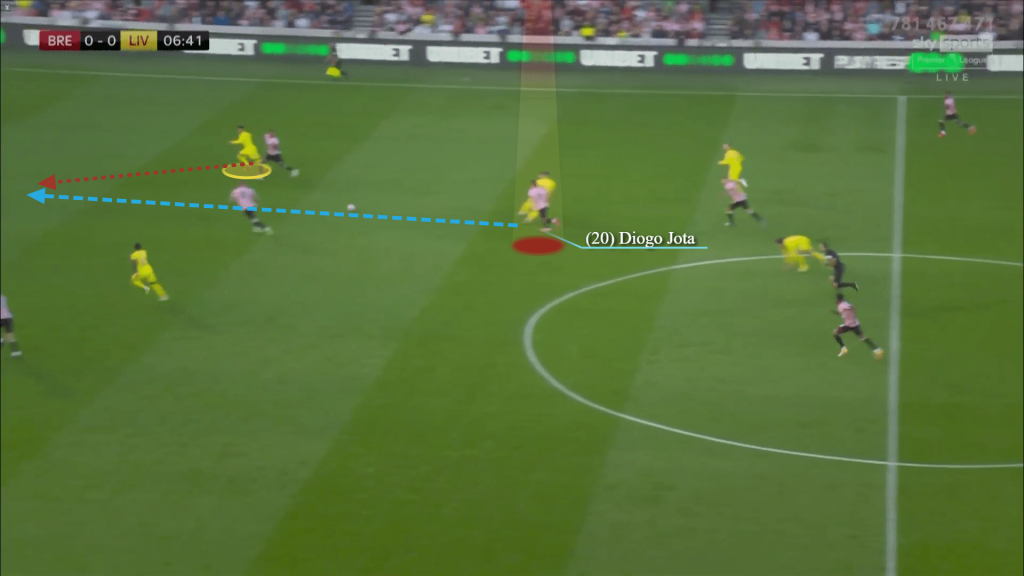 Distributing the ball on either foot competently, boasting the necessary vision to spot runners and the quality to execute his passes, Jota’s prowess here has made him an even more challenging foe to contain.

Full of energy, industry and ferocity in his defensive work, his pressing has unquestionably further endeared him to his teammates and his manager. Adhering to Klopp’s demands to press high and counter-press immediately upon his team losing possession, there’s been much to admire about his stopping output.

Responding to triggers swiftly and harrying with aggression while using his cover shadow to cut off passing lanes, opponents need to be clear in their decision making and technical skills to overcome him. Ranking in the top four percent among players in his position across Europe’s top five leagues in terms of pressing (21.60 pressures p90), top seven percent for tackles (1.33 p90) and top 12 percent for interceptions (0.70 p90) demonstrates his proficiency here.

Really coming into his own this campaign for the Reds, he’s been a key driving force for them on both sides of the ball. “Diogo is an exceptional player, exceptional boy. A perfect signing because he has everything that a Liverpool player in this squad needs,” explained Klopp.

“He has technical skills, he has physical skills and he is very smart and can learn all the tactical stuff pretty quick. On top of that, he can play all three positions up front, and in a 4-2-3-1 as a number 10.”

Firing on all cylinders, playing under a coach and in a system that suits him perfectly and quickly developing into Liverpool’s next attacking star, Jota has the world at his feet in terms of what he can achieve at Liverpool.