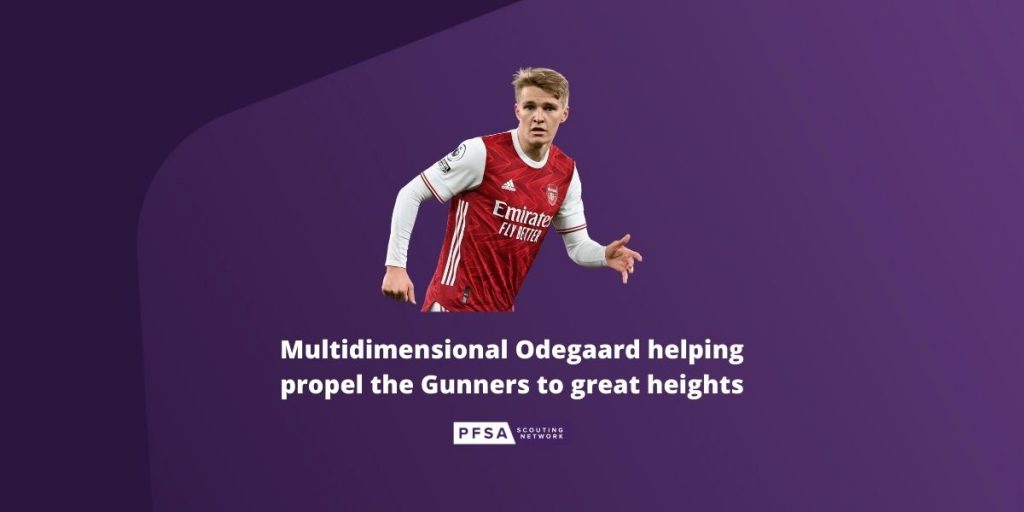 Combining flair, skill, relentless work rate and effectiveness, Martin Odegaard’s been a pleasure to watch within this Arsenal side who are riding the crest of a wave at present.

Having won 10 of their last 13 league matches, Mikel Arteta’s men are firing on all cylinders. And there’s no doubting the gifted Norwegian midfielder’s played an integral role towards their remarkable run of form.

Indeed, the man who joined permanently in the summer for £34 million from Real Madrid after spending a spell on loan at the Gunners last season, is proving his worth in all aspects of the game. And, in the process, completely repaying the club’s faith in him.

Clearly happy, fully in tune with his midfield colleagues in Thomas Partey and Granit Xhaka and oozing confidence, he’s excelling in his right sided central midfield station. “I think I’m in good shape but I think it’s all about the team, and the team is performing so well it makes it easier for us players,” he said after the Leicester City victory.

“You see Thomas and Granit, the job they do, they make it so much easier for me in the middle there. We’re strong as a team and that’s the most important thing there; then it’s easier for everyone to shine.”

Bursting with creativity and imagination with his passing, Odegaard’s been an instrumental figure in instigating so many of Arsenal’s most dangerous passages. Reading the play astutely, possessing outstanding vision and boasting a super range of passing, this gives him a sound foundation to frequently unbalance rearguards.

Excellent at combining intricately in close quarters with his crisp one and two touch layoffs, plus through deft back heels and flicks, it’s been a joy to watch him in such instances to unlock opponents. 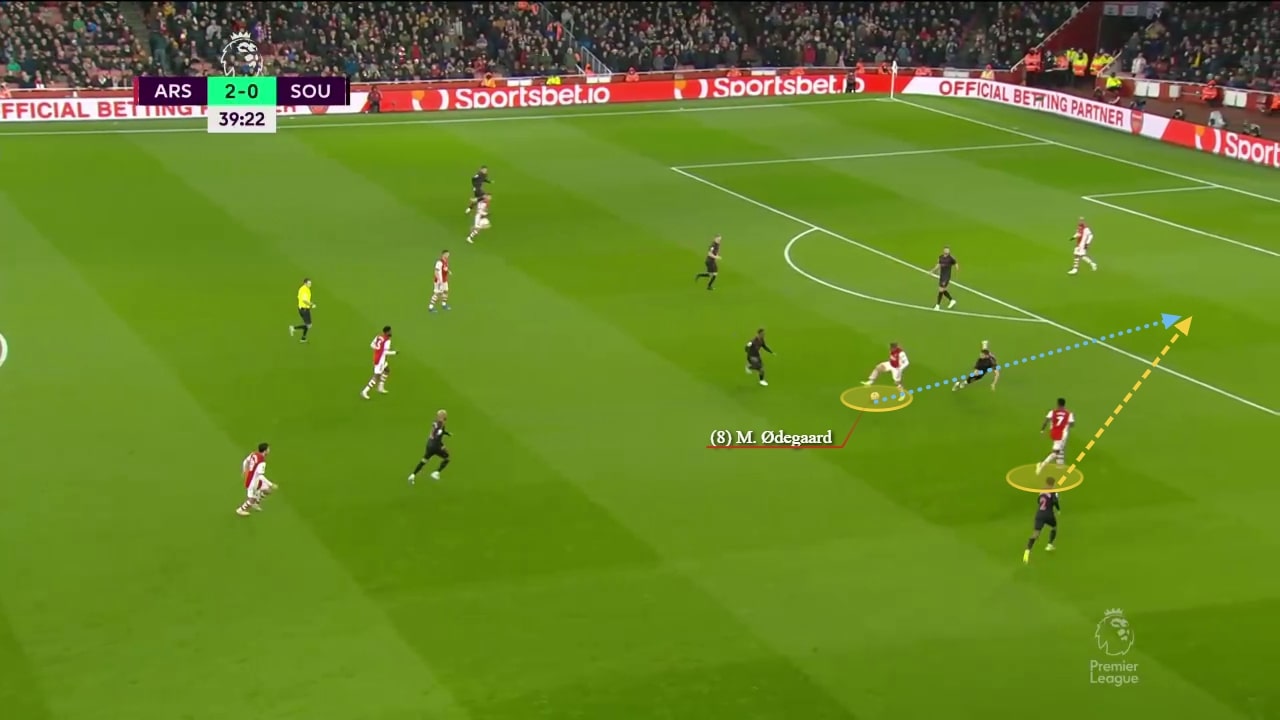 When afforded extra time and space on the ball, the Norwegian’s capacity to strike line breaking passes into attackers, feed runners in behind or down the channels and strike incisive crosses and cutbacks have further enhanced his value. Hitting the ball with his instinctive, effective technique, in alliance with how he knows whether to distribute with power, finesse, curl or loft, ensures he typically hits his targets. 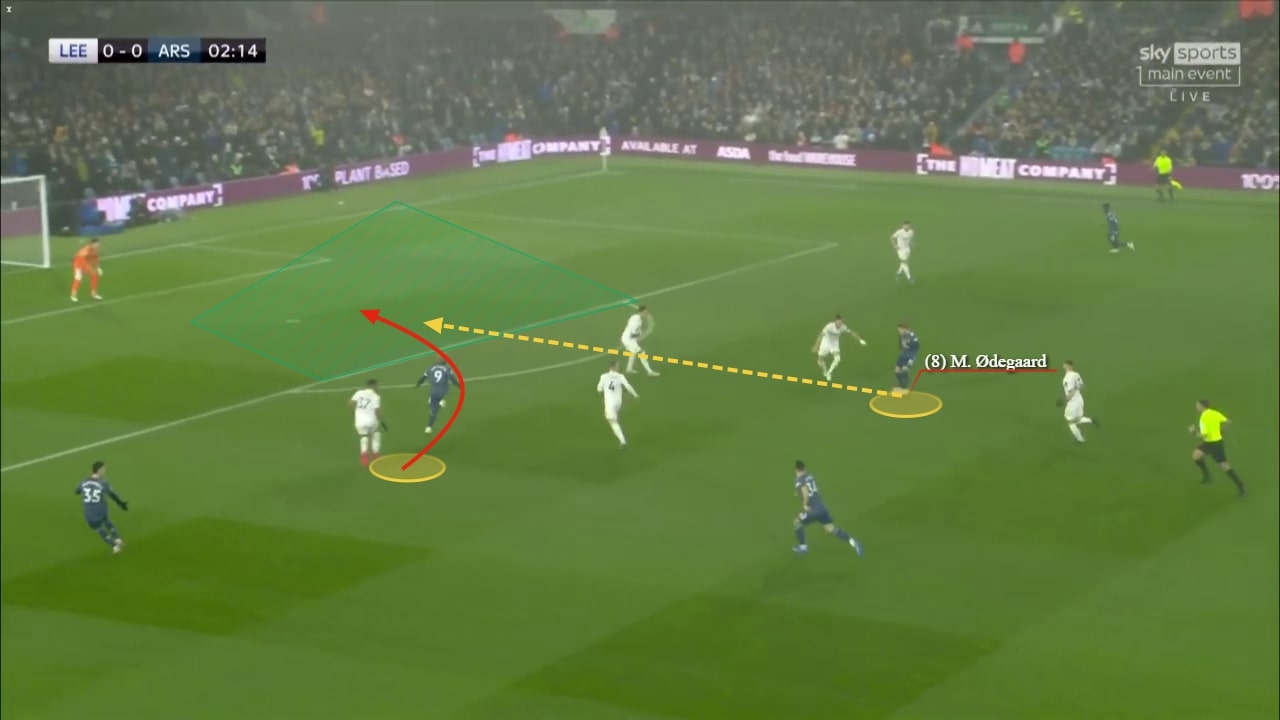 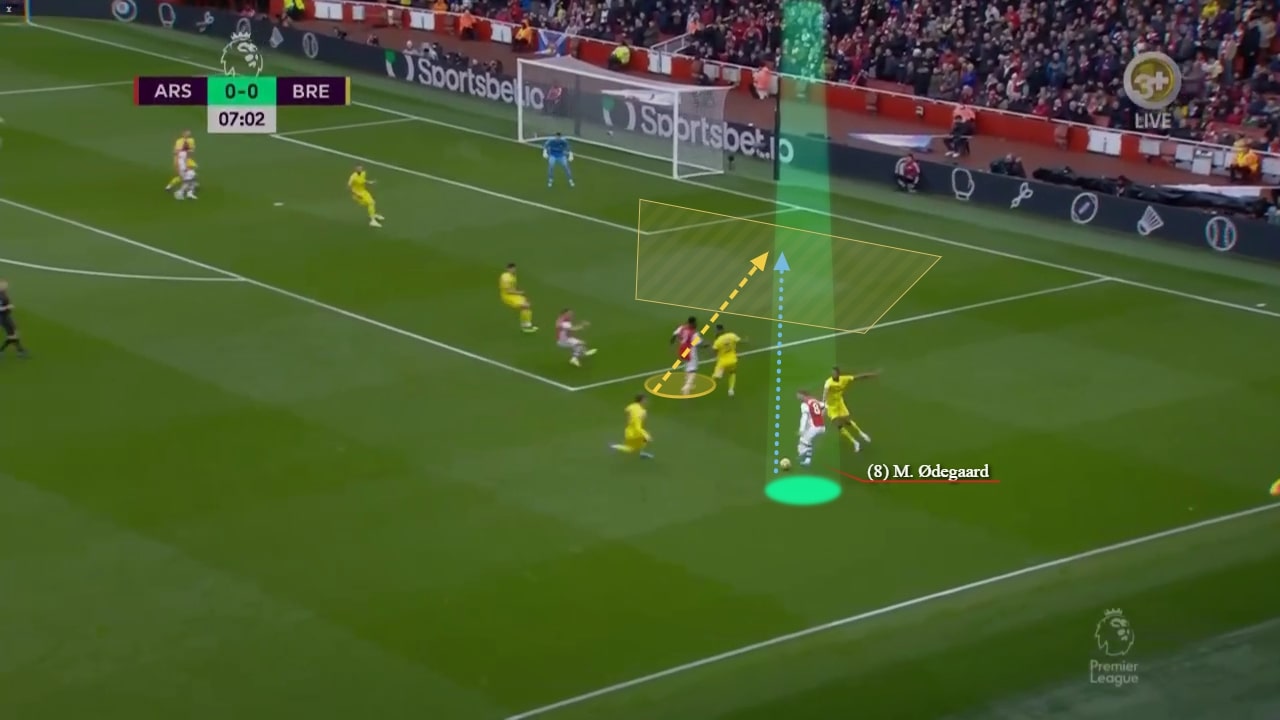 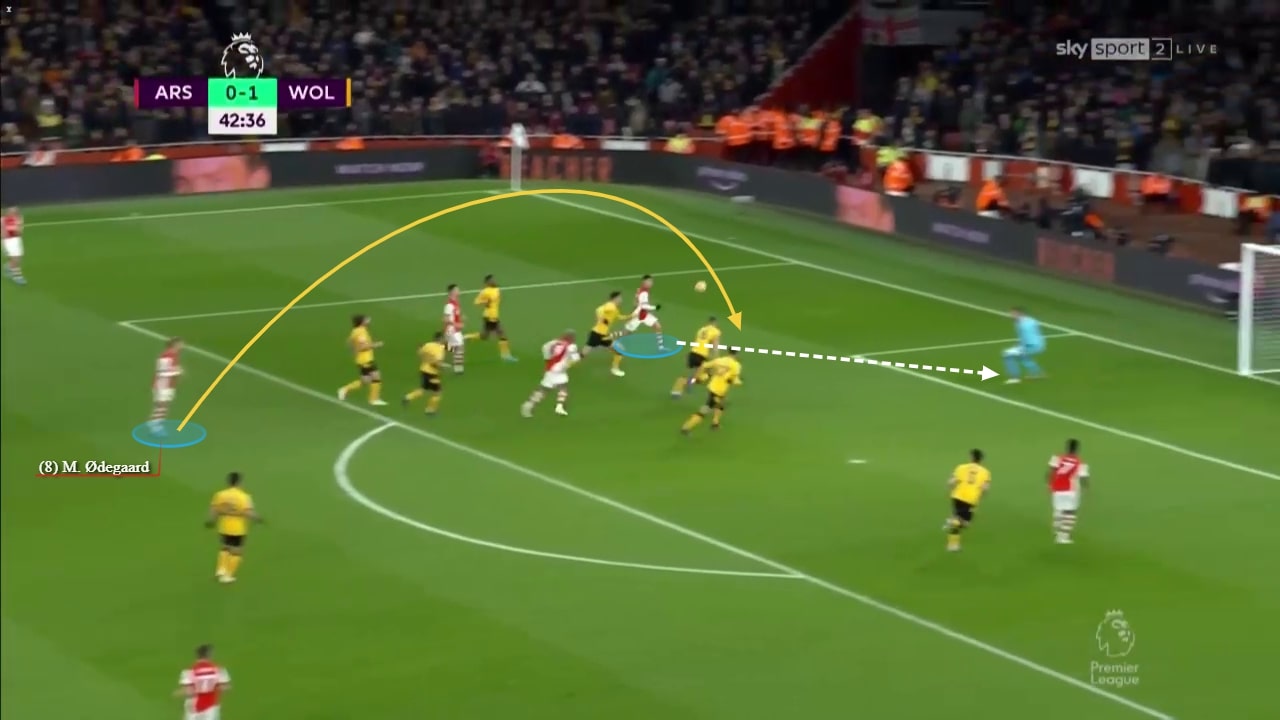 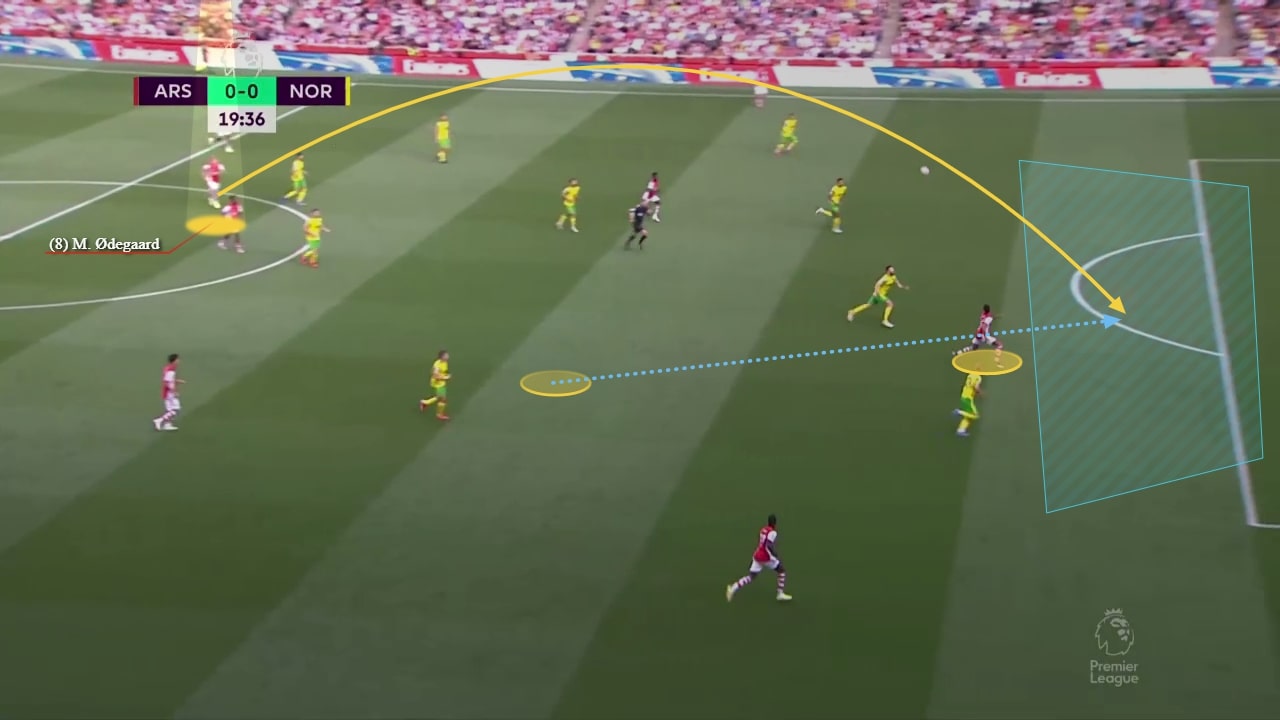 The fact he can use all parts of his foot and is such a brilliant set piece taker enhances his chance creating threat and what a force to be reckoned with he is. Ranking in the top 8% among players in his position across Europe’s top five leagues for progressive passes (5.68 per 90), top 10% for shot creating actions (4.38 p90) and top 16% for expected assists (0.26 p90) demonstrates his cutting edge.

Composed and comfortable on the ball, his dribbling is another asset of his, which he uses to maintain possession while waiting for an option, evade markers and beat or gain separation from foes to execute his actions. Slick in his first touch and ball control, this, in combination with how he scans his surroundings to adapt his receiving posture, enables him to then go about his work successfully.

Balanced, never in a rush and strong on the ball due to his low centre of gravity, foes have a tough time dispossessing him even though he isn’t the quickest. Able to outfox adversaries with his razor sharp control, feints, shimmies, turns away from danger and subtle alterations in pace amplifies his value. His aptitude here is shown by how he ranks in the top 28% for progressive carries (7.04 p90).

Drawing players in to create a free man is an additional way he destabilises opponents, for he’s usually two steps ahead ready to exploit the freshly vacated space to find a teammate.

Bringing it all together with his intelligent movement, and this is an aspect that really elevates his game to the next level. Relishing his current role and the freedom he has within it to strategically connect play, Arteta has found an ideal system and position for him to thrive.

So lethal when receiving between the lines in the right half spaces, he links play superbly with his nearby midfielders, fullback and winger, with his relationship with starlet Bukayo Saka especially fruitful. Timing his movement to form crucial triangles and overloads to help bypass the opposition and so the ball holder has options on different heights to beat the press, there’s no doubting his influence. 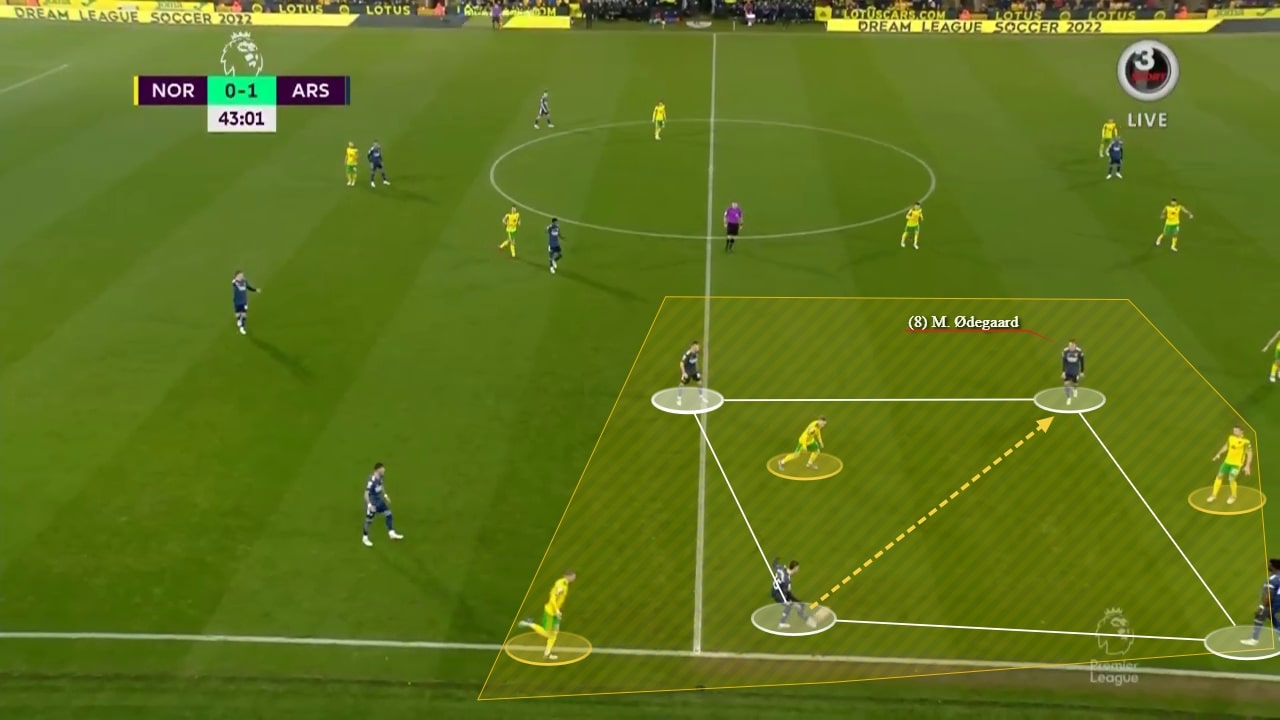 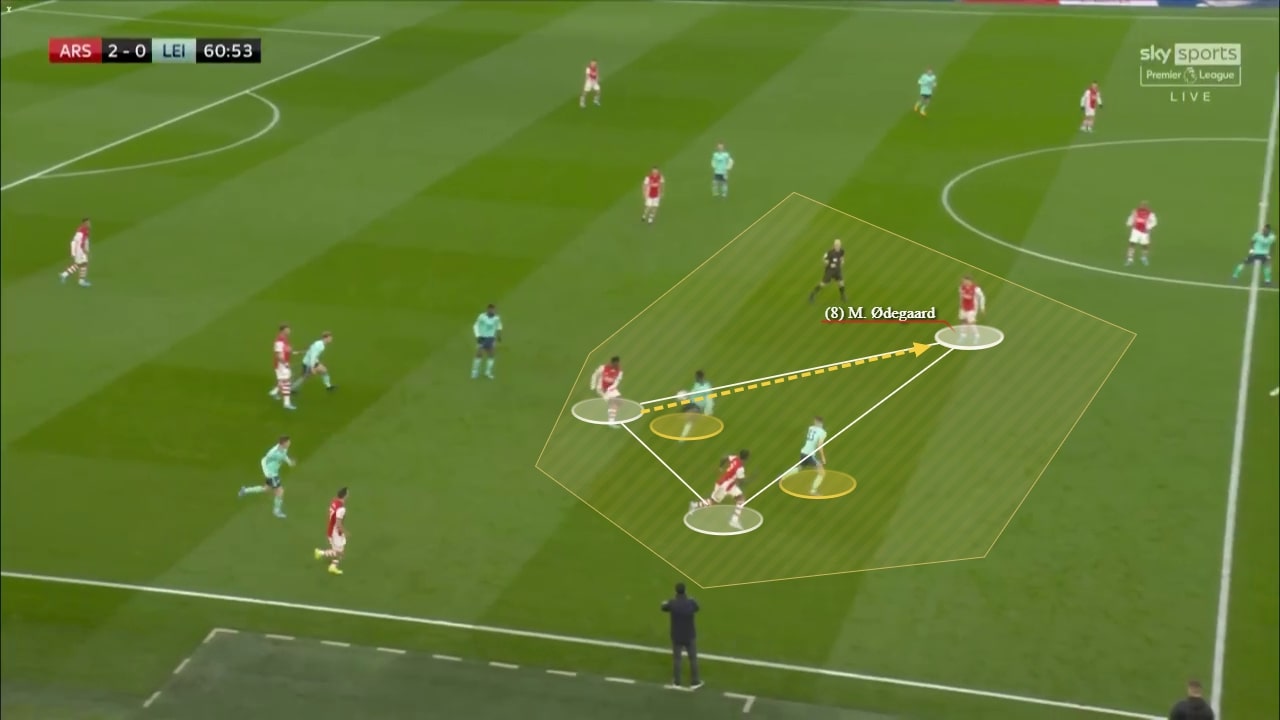 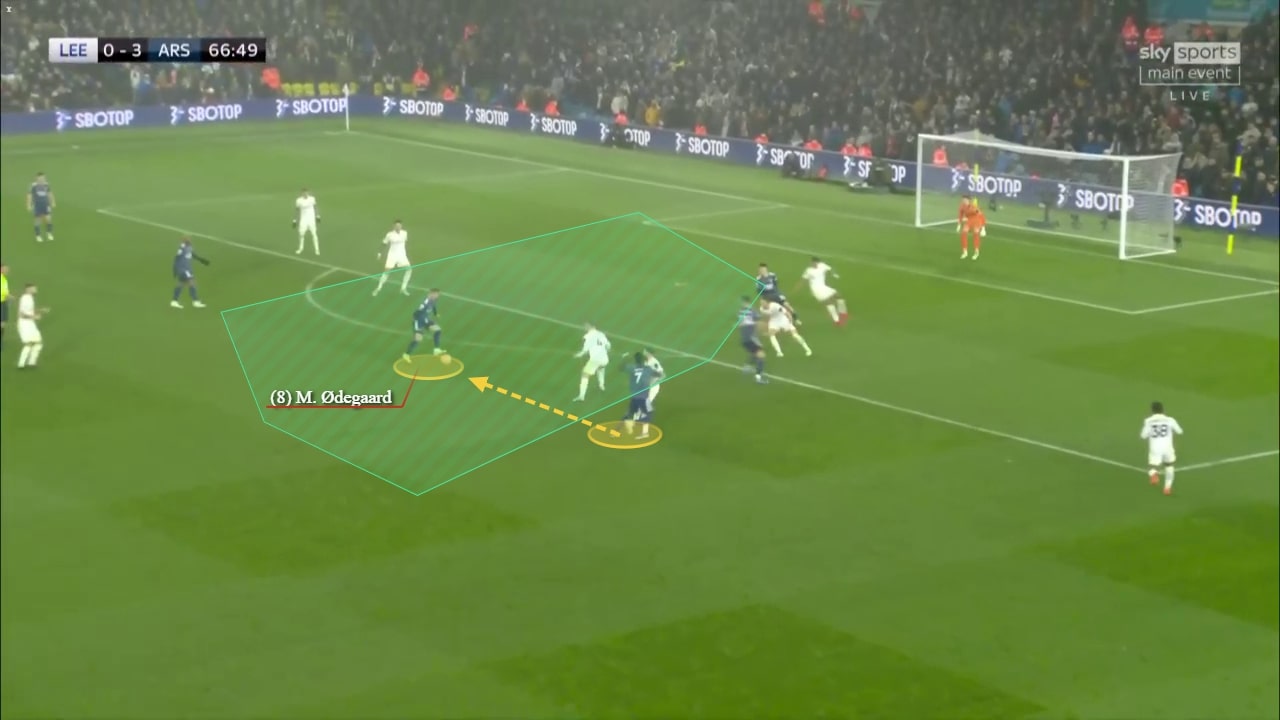 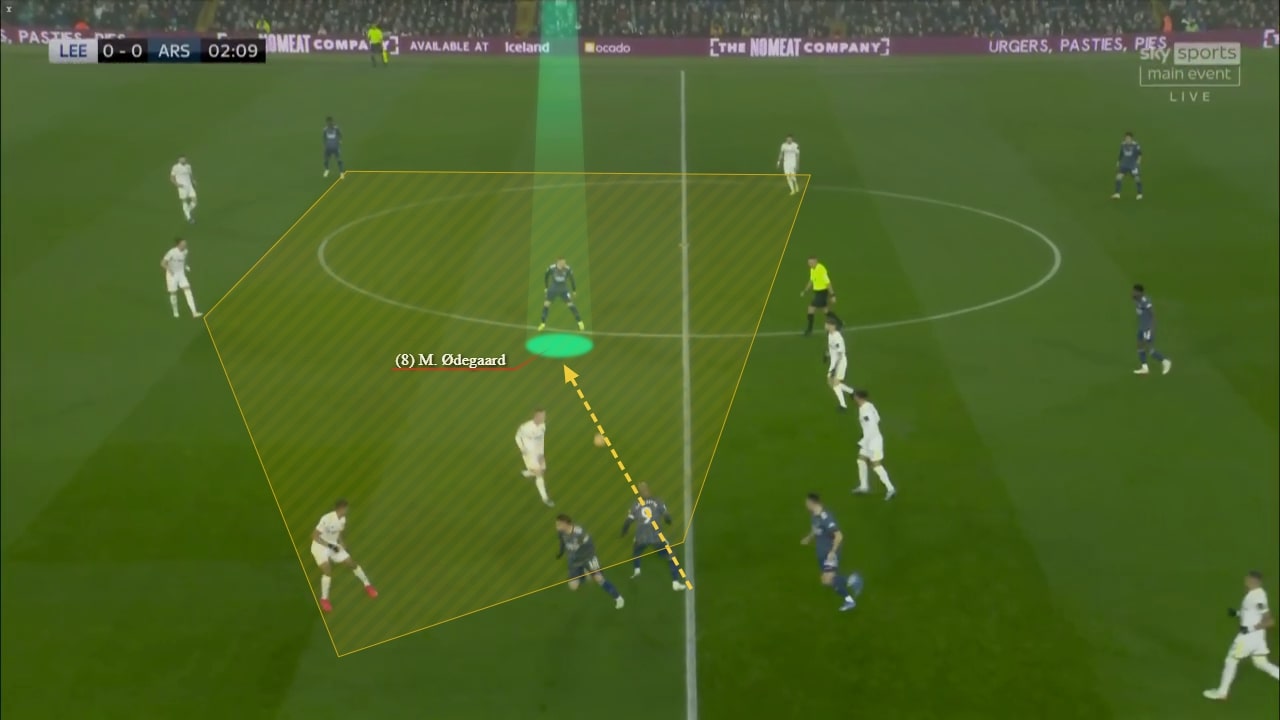 An added bonus from operating in this zone is that he can cut inside onto his preferred foot to open up the field and either switch the play, thread through balls in behind, combine with his attackers or unleash a shot. Moreover, inheriting the ball in this slightly withdrawn and wider slot allows him that little bit more time on the ball away from densely populated true central areas.

Compounding issues for his opponents through his smooth rotations and penetrative runs from deep into the box, thus seeing him provide a vital extra scoring option, Odegaard’s movement ties everything together nicely. “Martin was terrific again in every aspect of the game. When we were high, when we were deep, in the build-up phase, the way he understands and manages, he is coming a long way since his arrival and is showing great maturity and responsibility on the pitch. He makes the other players better,” Arteta explained following the Watford win. 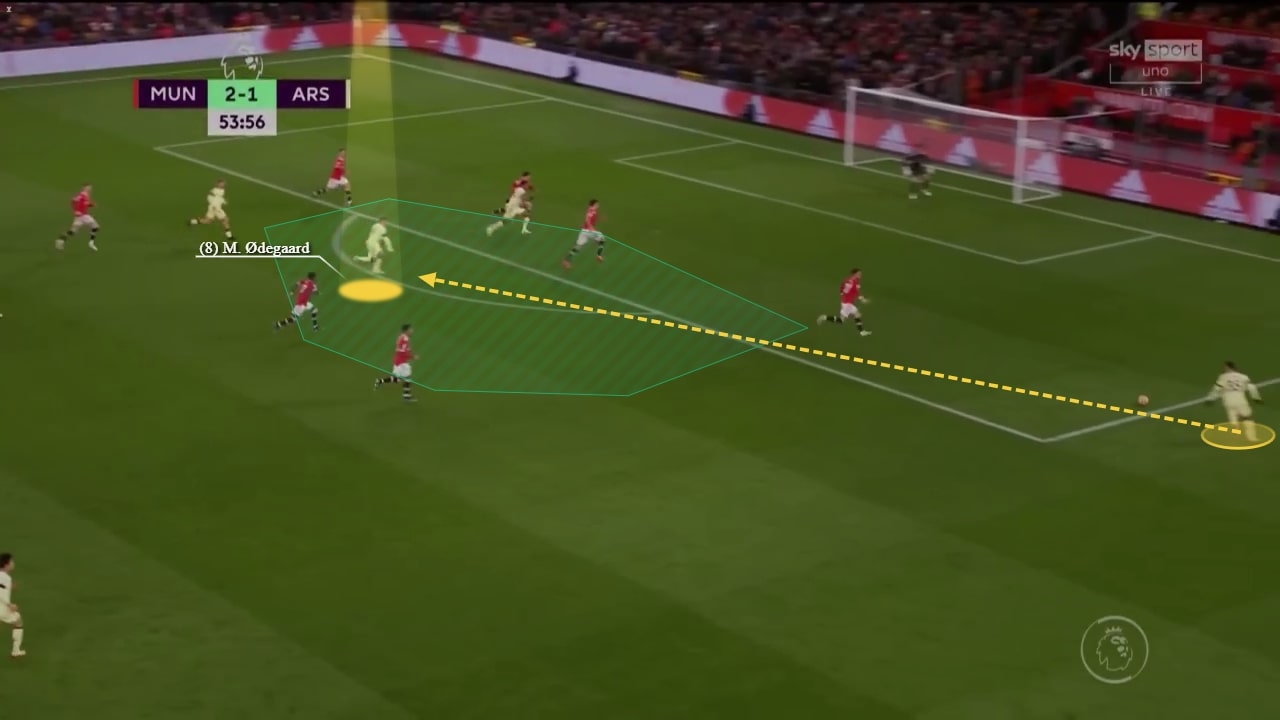 Leading from the front with his defending as well, there’s much to be admired about his work in this compartment too. Often joining the first line of pressure, from here he presses with intensity and aggression to win the ball back and force errors. Wanting to usher opponents away from central areas, it’s been valuable how he curves his pressure to use his cover shadow to eliminate potential passing lanes behind him. Furthermore, his knowledge of when to shift onto the holding midfielder, jump to the centre back or jet wider has helped Arsenal greatly.

Setting the tone for his colleagues to follow, the leadership, hunger and aggression he shows certainly inspires his teammates to match him.

Haring across the pitch to support his comrades by relentlessly tracking back and closing down enemies, the numbers exemplify his tenacious stopping work, for he ranks in the top 27% for pressures p90 (18.24) and chimes in with 5.34 ball recoveries p90.

Contributing in all phases of the game and in the best form of his Arsenal career, it’s been a joy watching the 23-year-old weaving his magic for the Gunners.

Playing with maturity and right on top of his game, the challenge will be maintaining his exceptionally high level for the closing stages of the crusade. If he can, then Arsenal will be well on their way to securing a coveted Champions League qualification place for the first time in nearly five years.