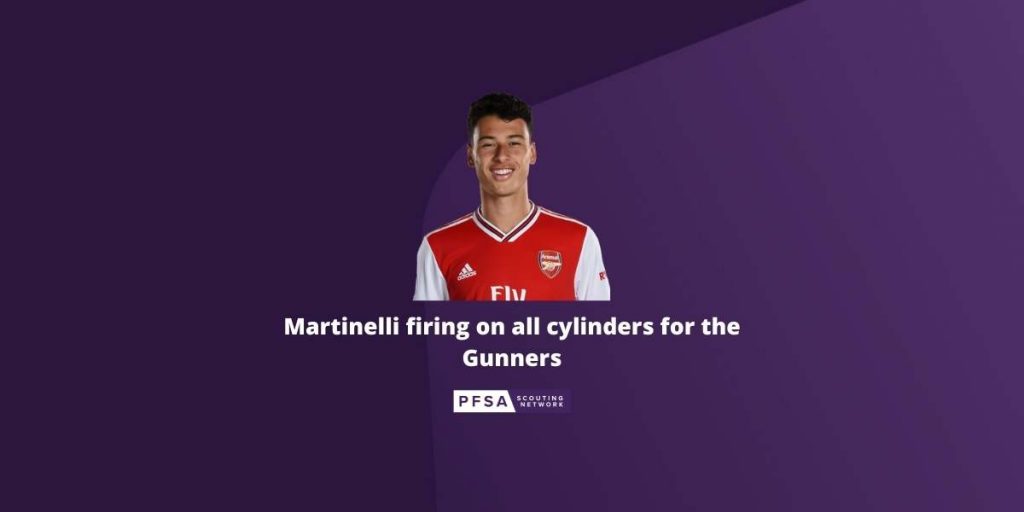 Although starts haven’t always been easy to come by for Gabriel Martinelli due to the heavy competition for places within Arsenal’s attacking ranks and his injury problems, the Brazilian’s stood up and strikingly taken his chances in recent weeks.

Making the most of his opportunities, which have predominantly been as a result of Emile Smith Rowe’s injury, the gifted attacker has put his best foot forward. Grabbing two assists and four goals in his last 449 minutes of action, he’s repaid Mikel Arteta’s faith in him that has at times looked in doubt.

But the Spanish boss recently expressed his view on the youngster’s playing time, saying: “Well, because of the amount of players we have in those positions, he had some games that he didn’t play. We have a lot of trust with Gabi and we need to find space for him to grow within the squad.

“If you look at the number of games he’s played the injuries have been a big setback for him, we sometimes forget his age and we need to try and help him maintain that balance because you can generate frustration that comes out of, in my opinion, a not very realistic diagnosis and we need time.”

Capable of playing as a striker or on either flank, the versatile, explosive attacker certainly brings a lot to the table whether starting or coming off the bench.

Being Brazilian it’s not surprising he’s very comfortable with the ball at his feet. Relishing every occasion to dribble at opponents in 1v1s or with space ahead of him in transition, the man with tight ball control and a lovely first touch is a huge asset for the Gunners in this regard.

So rapid at changing direction and using accelerations and decelerations, this, in combination, with his sharp body swerves and feints, make him a challenging opponent indeed. Courtesy of his aptitude here, many promising situations can be opened up for himself and his teammates. Be it cutting infield to shoot, gaining separation to assess his options, directly beating his man or by manipulating defensive shapes by drawing multiple markers, this adds to his menace.

While he’s at his best receiving in wider areas facing forwards or in an open posture, he’s still been useful down the middle when receiving with his back to goal. Able to turn his man and adjust his receiving angle to beat his man while protecting the ball, this has been notable to supplement his pace and skill when weaving away from danger.

Shifting the focus to his passing, and he continues to improve in this regard. Always eager to engage in quick passing combinations to unbalance backlines so he can be the third man runner or on the end of one-twos, he’s impressed with his crispness here.

Developing his execution in terms of through balls, crosses, cutbacks, set pieces and passes into the feet of teammates, there’s been a lot to like how he spots runners before hitting measured passes into their path. The fact he’s competent with both feet is a bonus too, for it opens up many more possibilities for him and his team. 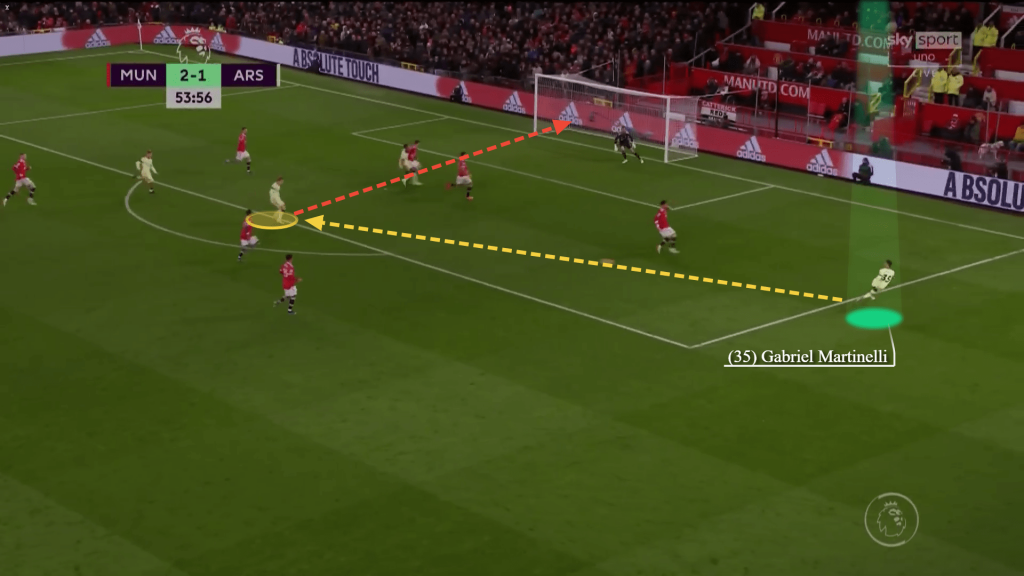 Showing his finishing prowess, Martinelli’s scored some wonderful goals for Arsenal already. Usually a player who takes high quality shots and is pretty accurate, his 0.42 Non penalty Expected Goals reading (as per FBref) from the last year shows his class. The fact this figure puts him in the top 7% among players in his position such as Jarrod Bowen, Angel Correa and Karl Toko Ekambi underlines his effectiveness. 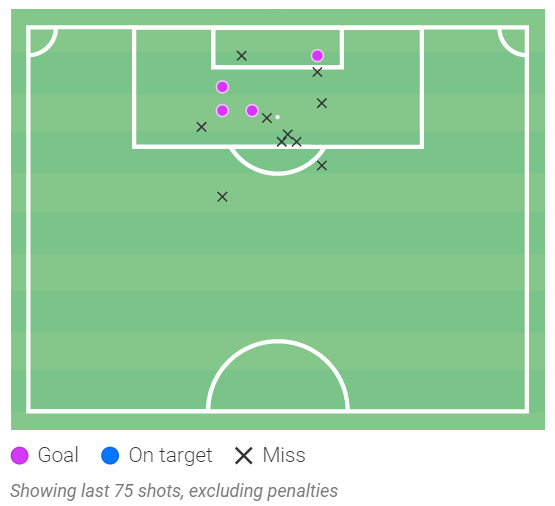 Although he can score magical goals like the one against Newcastle United, the way he can find the back of the net with towering headers, powered efforts, instinctive tap ins, composed 1v1 finishes and following rebounds add to his worth. 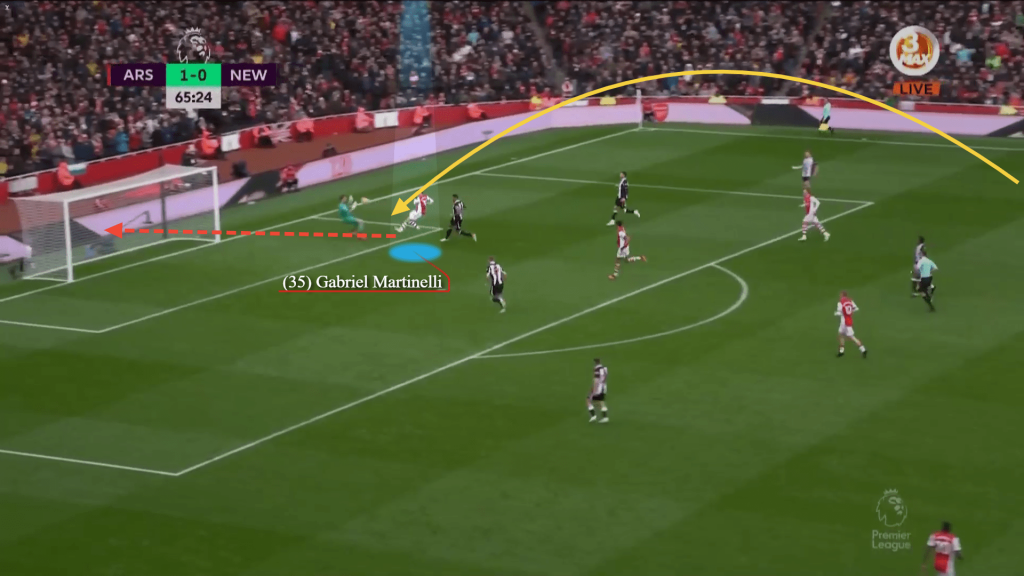 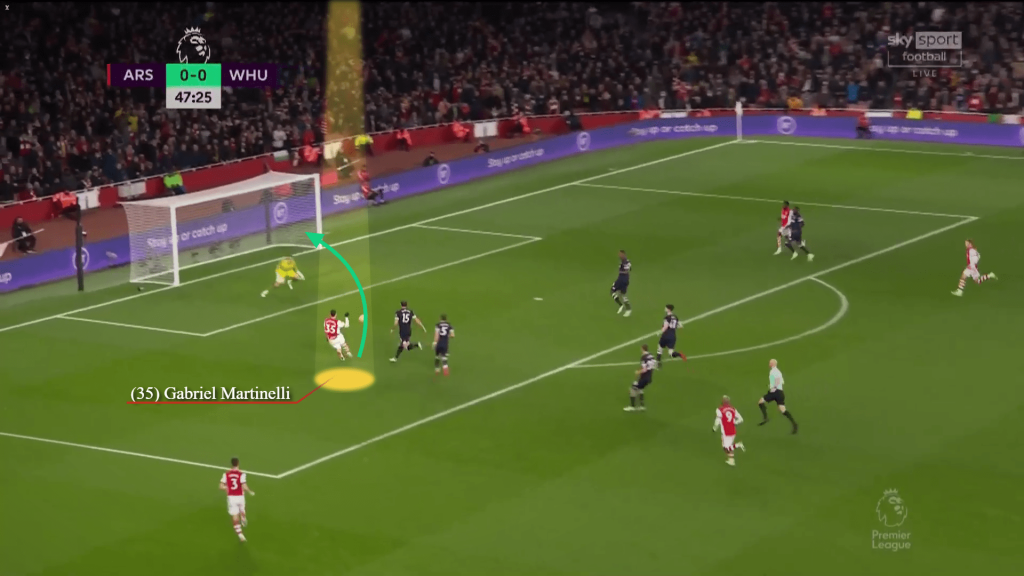 Reading the play smartly and quick to pick up the ball’s flight while remaining alert to his surroundings, he’s definitely shown he knows where to position himself.

This brings us neatly onto his movement, which ensures he occupies excellent areas inside the box to apply his finishes. Swift at recognising where teammates and defenders are, he alters his runs to either attack free space or evade markers.

Crafty at peeling off as the defence drops deep, surging towards the front or back post and exploiting the blindside of markers, he thrives at identifying gaps to utilise.

Such a threat when running in behind and down the channels too, Martinelli times and angles his runs intelligently to get the jump on his markers. Getting on his bike rapidly once he sees the ball holder prepared by looking up and when the ball is on their preferred side, he pounces sharply to serve as an outlet. 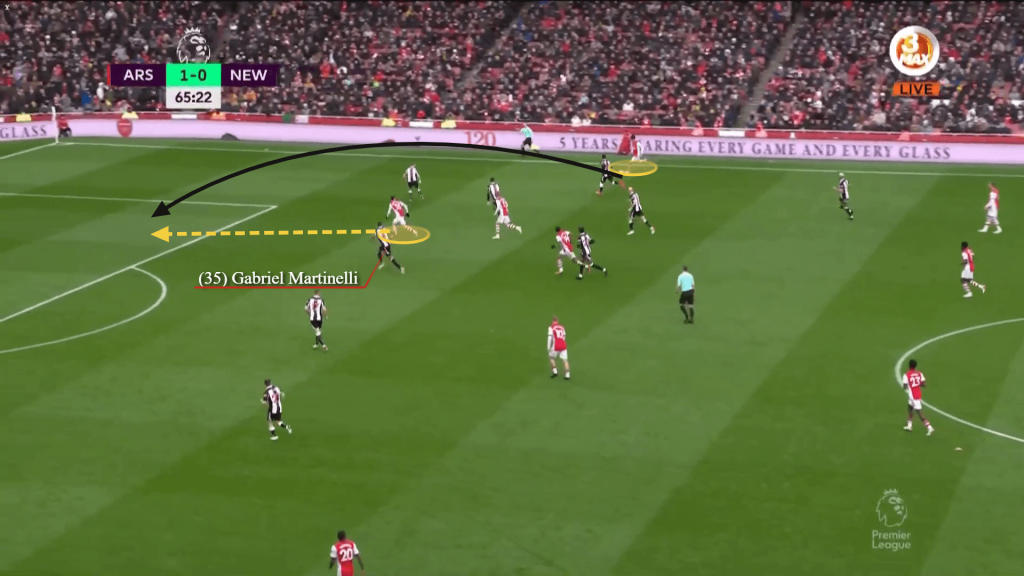 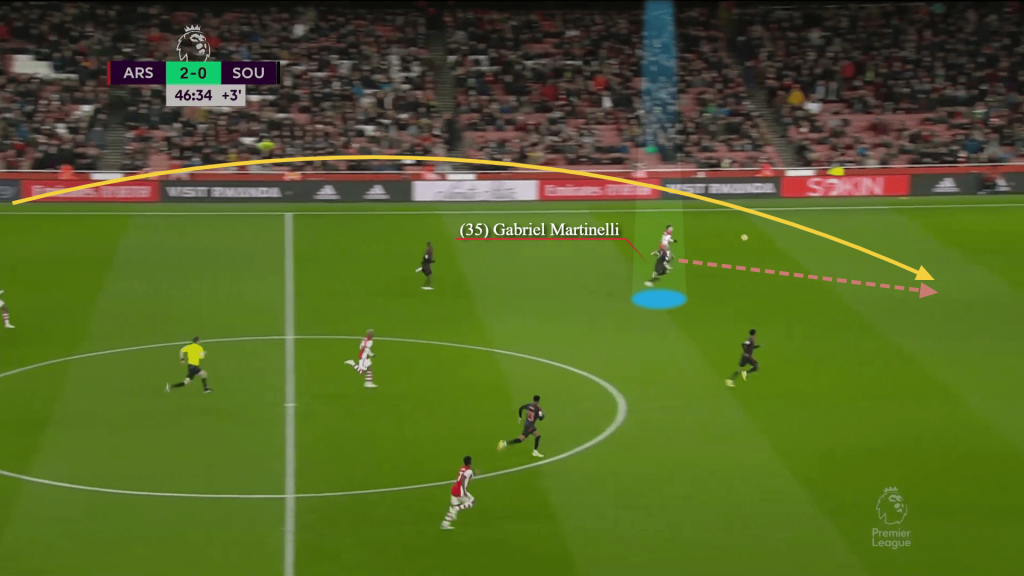 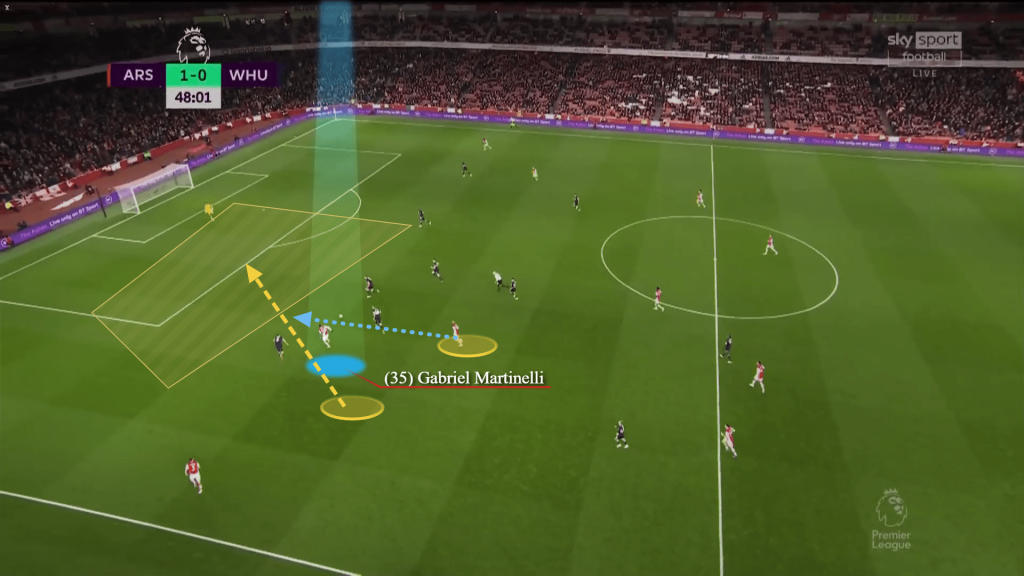 Especially lethal with devastating out-to-in runs originating from the left, where he can exploit the blindside of opponents and gain a dynamic advantage over his more stationary foes, the exceptionally fast forward is a force to be reckoned with. 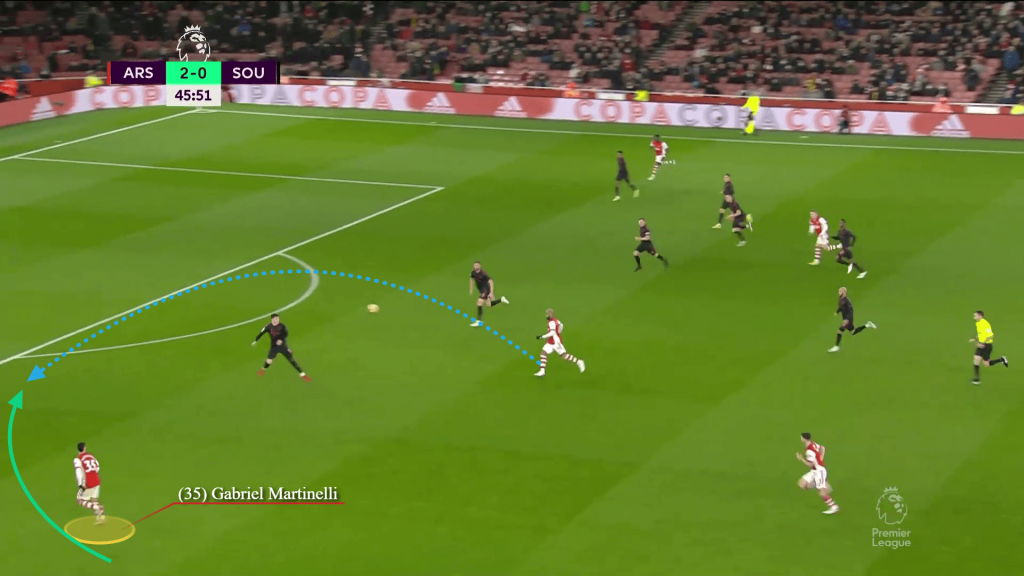 Handy at using stop gos and zig zags to unbalance markers, this helps him gain separation from too by briefly catching them off guard.

Very in tune with Arteta’s tactical demands, the way he smoothly rotates with teammates is another vital string to his bow. In doing so, opponents find him a challenging man to settle into a rhythm against, for he’ll switch flanks, swap with the striker or interchange with his nearby fullback. 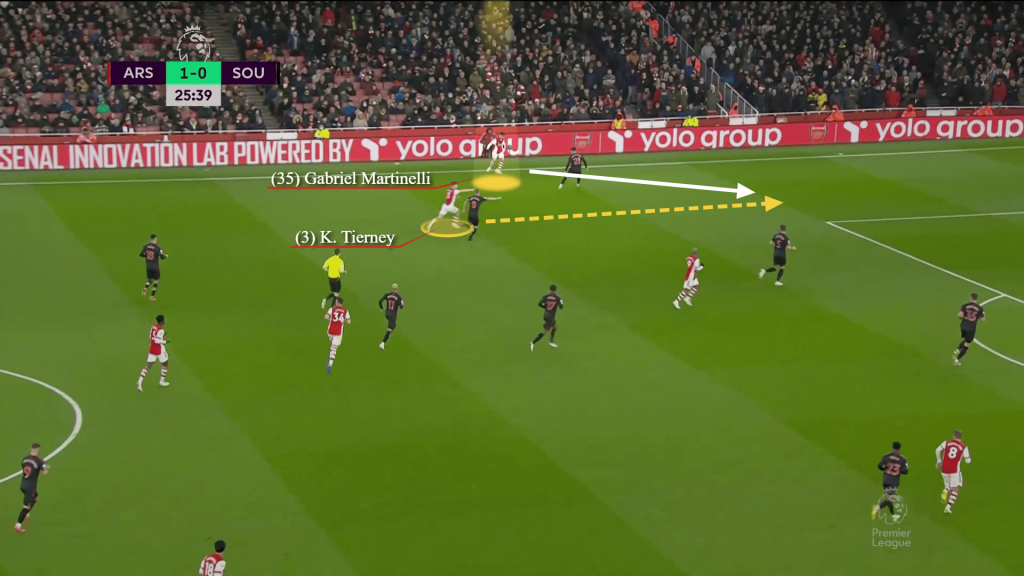 Constantly causing marking dilemmas for defenders and disrupting their organisation, his work here compounds issues for his adversaries.

Meanwhile, in terms of his defensive output, there’s no denying what an asset he is here. Ultra fit, boasting blistering speed and aggressive in his approach to recovering possession through his pressing, he sets the tone brilliantly for his teammates to follow.

Giving opponents minimal time on the ball, curving his harrying to block passing lanes and awake to triggers, Martinelli contributes heavily towards stopping opponents building out from the back coherently.

Moreover, his energetic counter pressing and strong back tracking to recover his position or help a colleague are additional upsides attached to his stopping work.

Proving an absolute game changer for the Gunners in recent weeks, the inordinately talented 20-year-old’s doing everything in his power to become a regular. It’s been encouraging to see Arteta rewarding him too, for he’s now started five consecutive matches for the first time in his Arsenal career.

Fully fit and firing on all cylinders, if he keeps up his purple patch, there’s every chance he’ll cement his spot in the first eleven sooner rather than later especially considering Pierre-Emerick Aubameyang and Nicolas Pepe appear on the outer.

Giving his team a real X Factor going forward and honing his craft all the time working under the tactically astute Arteta, the sky’s the limit for Martinelli if he can stay healthy and keep up his high level.