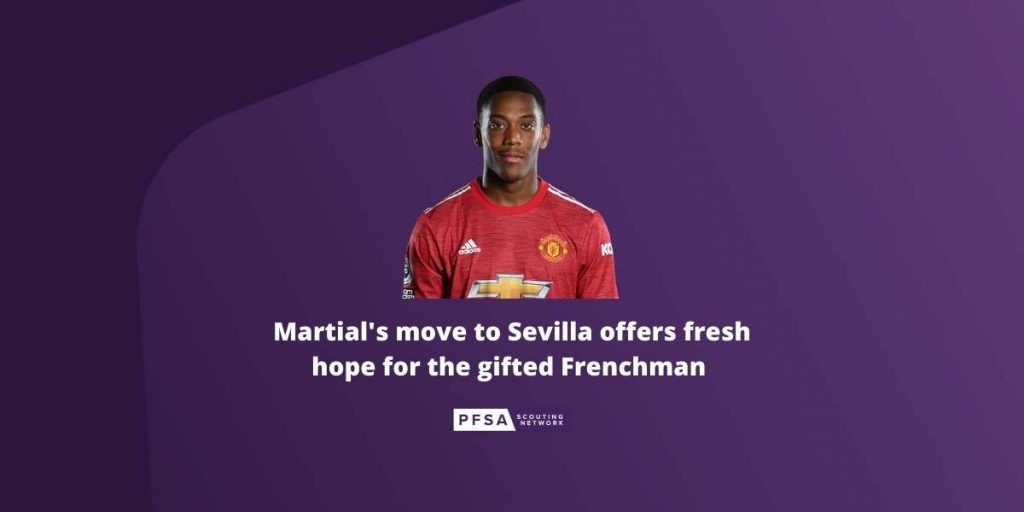 Having only made 11 appearances for Manchester United this season and eager for a new challenge, Anthony Martial’s move to Sevilla is a nice fit for the Frenchman.

Not seen as an integral part of Ralf Rangnick’s plans, coupled with the fact Sevilla were desperate for some attacking reinforcements, Martial’s happiness with the move was evident when speaking upon his arrival.

“I want to play more and show what I can do,” he said. “I believe Sevilla is the perfect place to do that. I want to score goals, provide assists and be crucial for this team in the next five months. There are many good players at Sevilla and I want to bring my experience to the side.”

“The coach [Julen Lopetegui] and the sporting director [Monchi] showed a strong interest in me and that’s what convinced me to come here. They [Sevilla] wanted me in the past and we kept in touch. They contacted me recently and said I could help them.”

“I have trained a lot in the past few months. I want to adapt as soon as possible to the team and connect well with my teammates to help them reach their aims for the season. I’m ready to play. It’s not just about money. It’s to play and to enjoy it. That’s it. That’s why I chose to come here, to play and to enjoy football again.”

Set to add plenty of offensive impetus to the title chasing Los Nervionenses, the 26-year-old attacker, who can play as a striker or out wide, should give them a real boost.

A proven finisher throughout his career, which he’s showcased during his stints with both AS Monaco and Man Utd, this is a vital weapon in his armoury. Capable of scoring a wide array of goals, Martial can find the net with trademark placed finishes where he opens up his body expertly, powerful blasts from range, when confronted with 1v1s with the keeper and when applying instinctive finishes from close range.

It’s also been admirable how effectively he uses dinks and chips to outfox onrushing keepers, plus mixes things up by accurately firing his shots off high, low, wide and anywhere he sees an opening in the goal. 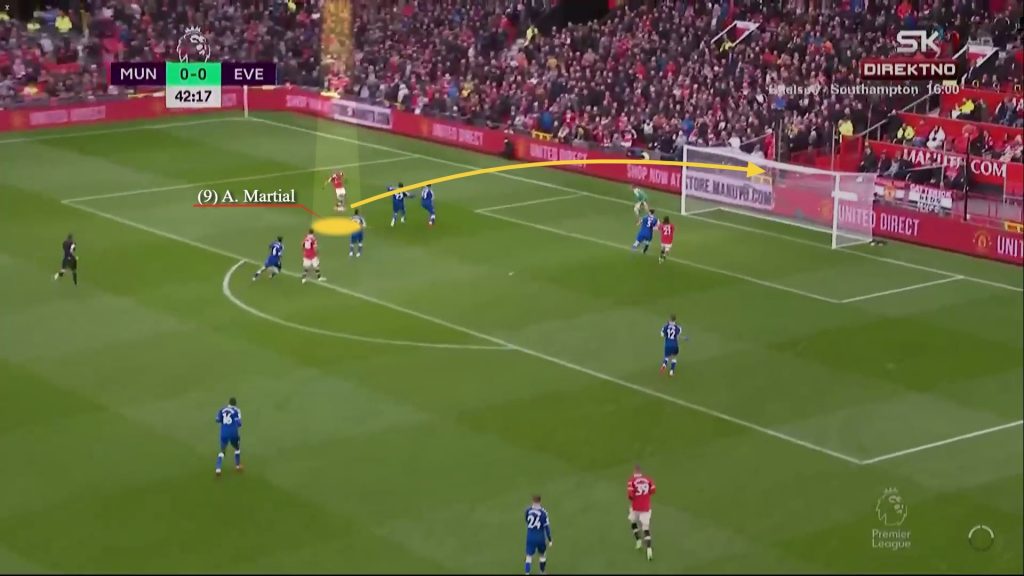 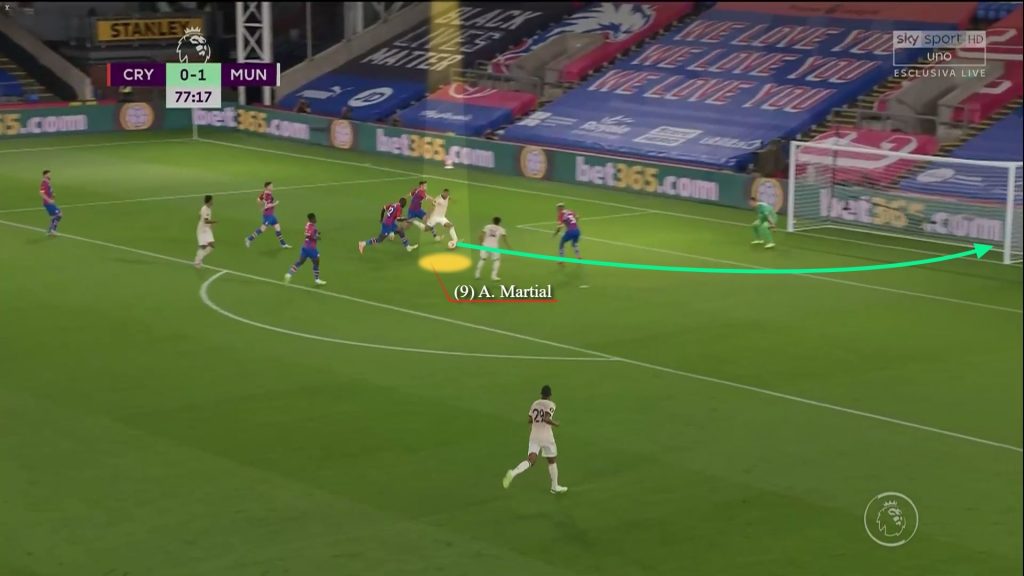 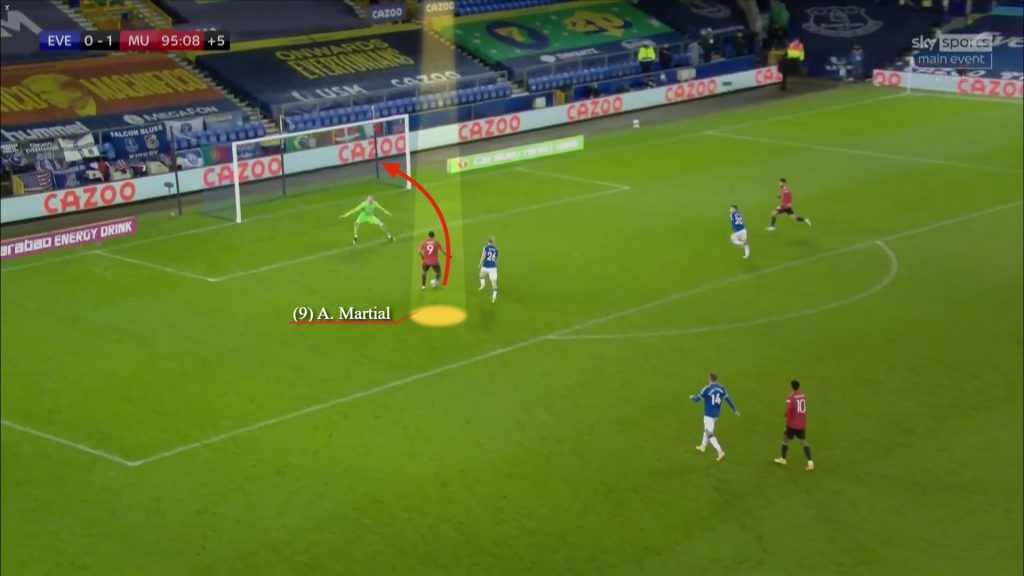 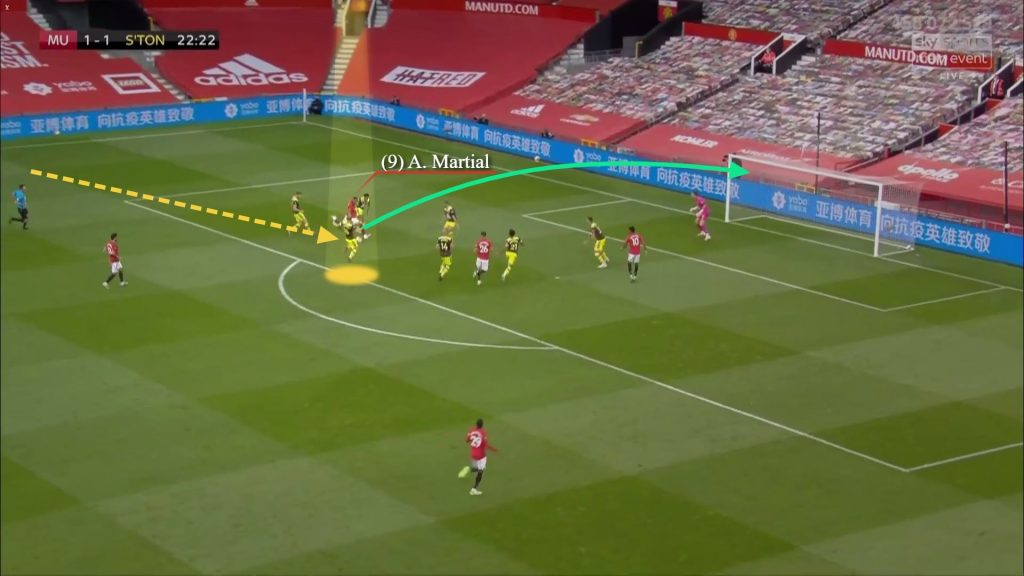 By remaining calm and reading situations quickly has certainly been valuable too, for this sees him not panic or rush his chances.

His movement brilliantly supplements the above, with his pace and timing ensuring he regularly exposes defences to break in behind and stretch backlines. Typically timing his bursts nicely, how he varies his runs to attack the space between defenders, exploit the blindside, hit the channels or recognises if a defender is preoccupied or ball watching have been further keys to his success.

Handy at taking up quality positions inside the box, pouncing on the counter, venturing into the less populated half spaces and hugging the touchline depending on his nominal role, these are extra strings to his bow that add to his elusiveness. 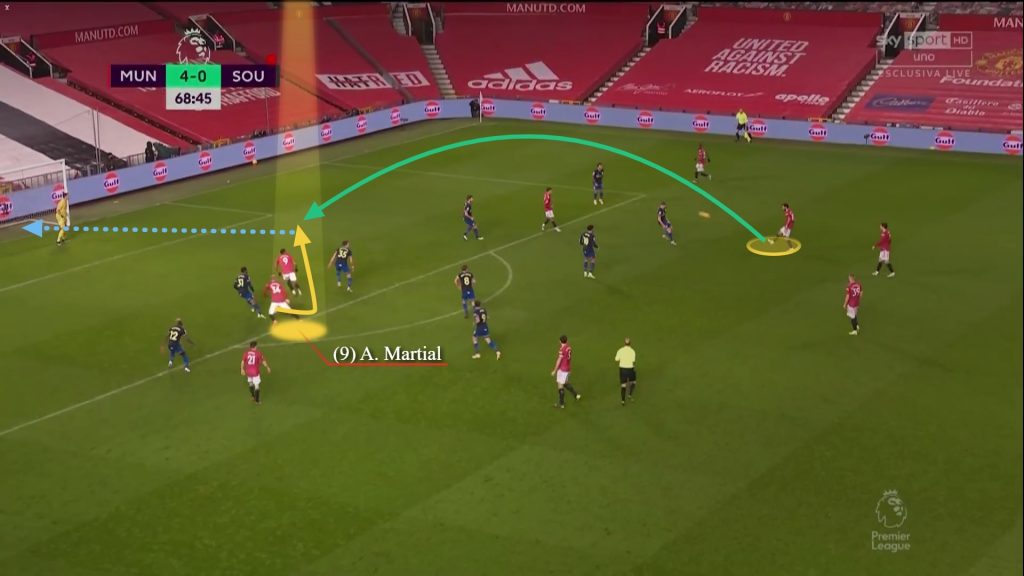 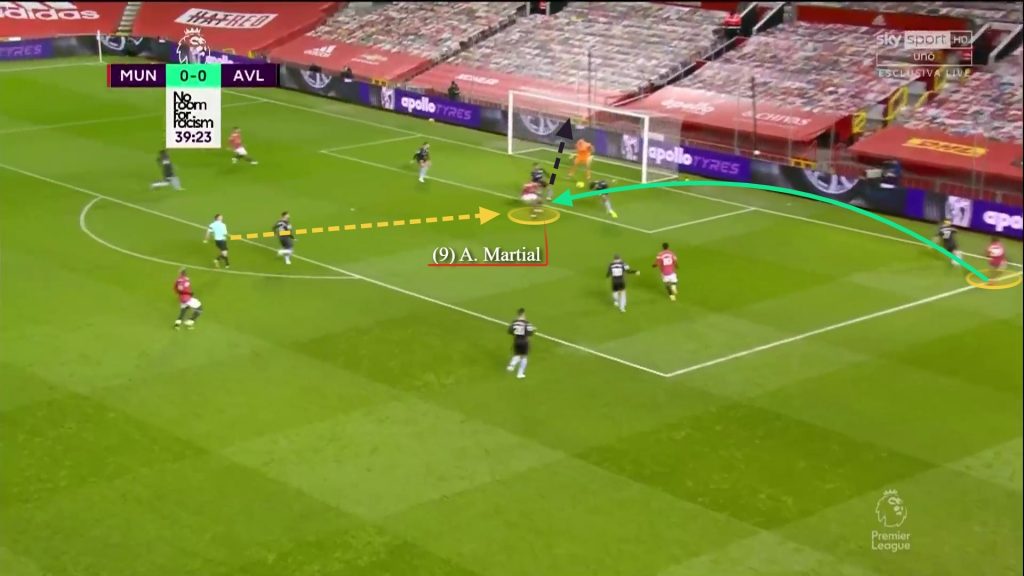 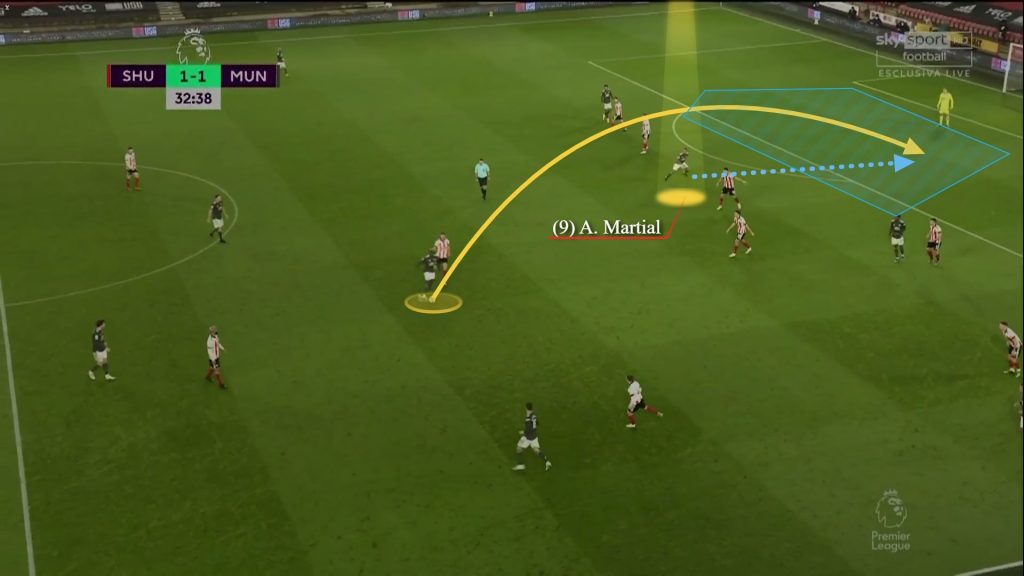 Full of quality and ingenuity with his passing, the way he engages in intricate combination play to draw out opponents and sets free teammates is always a highlight. Be it with clever flicks or crisp one and two touch passes both wide and centrally, his work here deserves mention.

Boasting good vision and a keen eye for a pass, how he can thread some enticing through balls, strike some teasing crosses and link play coherently have added to his value. 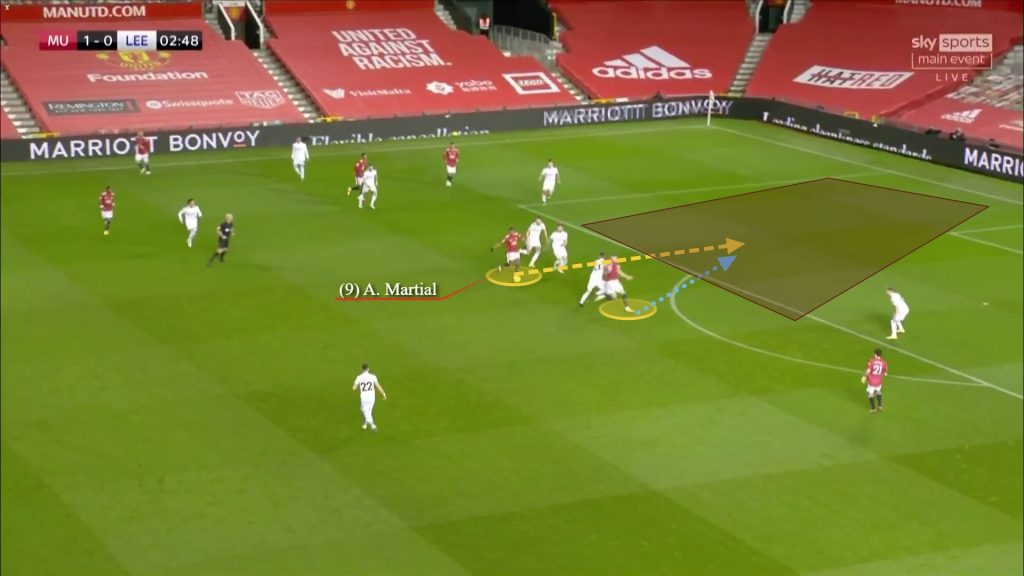 Meanwhile, when it comes to his dribbling, the 26-year-old parlays power, finesse and speed to be a menacing presence. Possessing a solid first touch and control, the explosive Frenchman can then beat adversaries using razor sharp changes of pace and direction, plus through his neat array of shimmies, feints and skill moves.

As a result, he not only is well placed to outfox foes 1v1, but also draw multi markers to then open passing lanes and create a free man. His ball carrying is a great weapon when marauding forward on the counter as well and whenever he’s looking to gain separation prior to unleashing a shot or setting up colleagues.

A tough man to dispossess, this, in alliance with how quickly he executes his dribbling maneuvers, ensures he wins many fouls in advantageous areas in the final third, which tees up many set piece scoring possibilities.

Having been at United for roughly seven years and only enjoyed two especially successful seasons since joining from Monaco in a whopping deal worth £57.6 million including add-ons, a fresh start is exactly what he needs. It must also be said injuries and United’s frequent managerial changes have played their part during his mixed time with the Red Devils.

Often criticised for his perceived lack of effort and heavily derided by fans and pundits for his inconsistency, moving to Spain will hopefully be the catalyst he needs to kickstart his career.

Working under the tactically sophisticated Lopetegui, who’ll have clear ideas on how to get the best out of Martial, he’ll be given every chance to prove his worth.

In the case of Martial, United’s loss certainly looks like Sevilla’s gain.