Marauding Max Aarons a star in the making for Norwich City 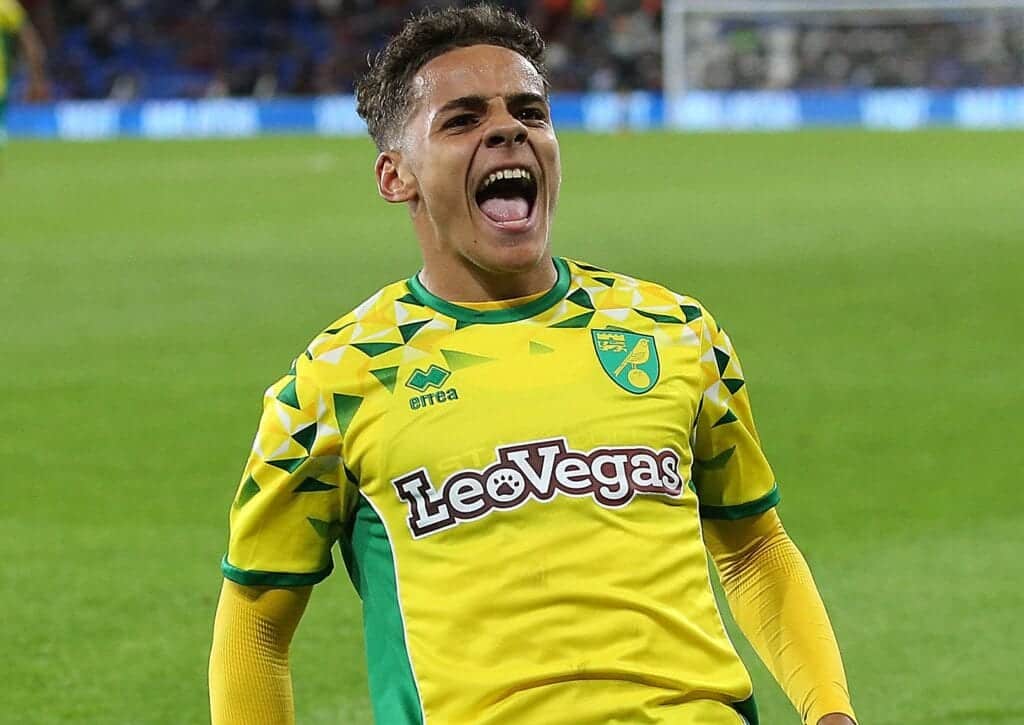 Having enjoyed a sensational campaign for table topping Norwich City, it was great to see their marauding right-back, Max Aarons, recognised for his efforts by winning the EFL’s Young Player of the Year award.

Achieving this accolade is a genuinely remarkable achievement by the Canaries academy product, who only made his professional debut this season, as his meteoric rise has been a crucial component towards Daniel Farke’s team’s wonderful campaign.

“I’m just really grateful for the opportunity I’ve been given this year and it’s been a great season. I can’t really put it into words – 100pc I have to pinch myself,” he told the PinkUn.

“A year ago I was preparing for youth cup games. My main expectation this season was just to get a debut or feature at some point. So to think what’s happened in 12 months, to being in the team at Norwich and then to nights like this – it’s amazing.”

Bursting with energy, enthusiasm and youthful exuberance, the 19-year-old’s consistent contributions on both sides of the game have clearly seen him endear himself to his manager. “From the first moment he was with us he has improved each and every day, his consistency in his performances is outstanding,” explained Farke. “He’s just 18-years-old, it’s outstanding at such a young age with such good performances, I hope we can develop him further.”

While his ever improving defensive output has been impressive, where he’s shown his ability to track runners diligently, defend 1v1s effectively, position himself soundly and time his tackles smoothly, his offensive exertions have been the most eye-catching aspect of his armoury.

Always keen to push high and get into advanced areas, Aarons has timed, angled and directed his movements brilliantly to provide his colleagues with a progressive option. Successfully adding width and depth to the Canaries’ forward forays, his runs frequently stretch opposition backlines horizontally and vertically. This subsequently unbalances their adversaries’ structures, which notably generates room for his teammates to exploit too. 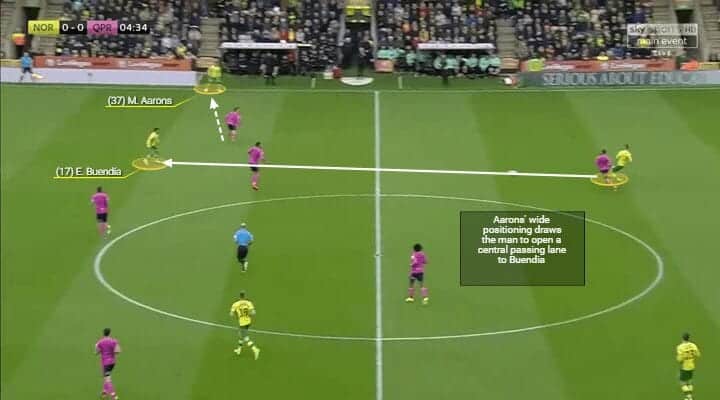 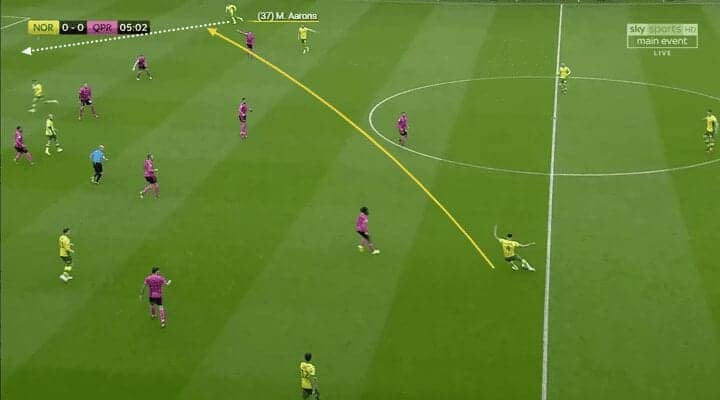 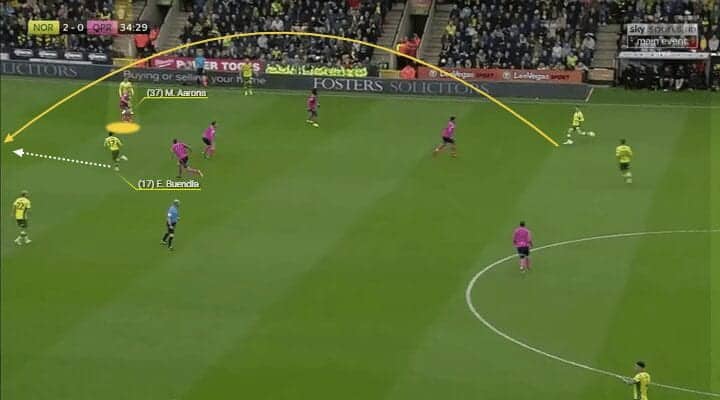 Working so cohesively with his colleagues, they also help create space for him with their cunning movement by pinning and drawing their man away from space Aarons wants to attack.

The way the searingly fast fullback mixes things up has been crucial too, for he’ll regularly perform rotations with his nearby winger, something that allows him to embark on underlapping runs, jet forward on typical overlapping runs or surge in behind with diagonal bursts. To elaborate on the latter, and this has been especially notable, as these runs are so hard to track for opponents due to Aarons streaking upfield on their blindside, which gives him a dynamic advantage over his more awkwardly oriented marker to beat them to crosses or balls in behind.

Seeing as he’s given such licence to motor upfield aggressively, the cover provided by his nearby central defender or central defender has afforded him the platform to attack while ensuring Norwich remain structurally secure in case of a turnover.

In Norwich’s slower more methodical build-up play, his capacity to help his team manufacture 4v3 or 3v2 numerical and positional superiorities (in ideal diamond and triangular shapes) to help bypass opposing defensive setups has been helpful in progressing upfield. 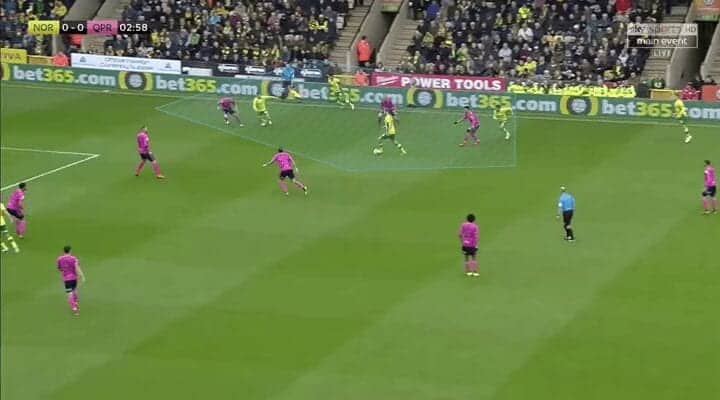 Technically proficient, the youngster’s qualities here are also of a high standard, thus further enhancing his worth to his team. Possessing a clean first touch, neat ball control when running at speed and a nice repertoire of maneuvers to beat or gain separation from his marker, he’s certainly a handful in 1v1 battles.

Indeed, his quality here regularly allows him to get into advantageous position to use his tidy passing skills to find a teammate. Whether sharply combining out wide when under pressure, whipping in incisive crosses and cutbacks, playing accurate through balls in behind, hitting vertical line breaking passes into the feet of his attackers or playing more simpler passes for ball retention purposes, his distribution has been very valuable. 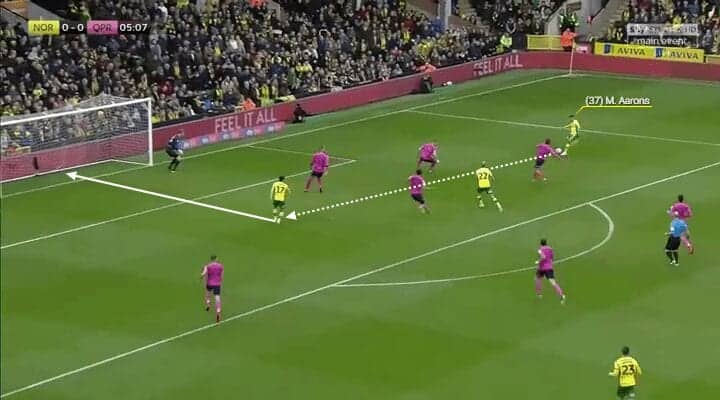 Developing his already solid decision making with every passing appearance, he’s coming on in leaps and bounds in this area.

Showing his durability and high fitness levels throughout his 38 appearances in all competitions, the manner in which he’s adapted to the physically demanding Championship has been another positive. Moreover, the fact he’s provided six assists and scored three goals this term, plus registered 2.59 dribbles pg, 3.89 interceptions pg, 3.2 tackles pg, 5.8 ball recoveries pg, 1.83 progressive runs pg and 0.61 shot assists pg , has illustrated his sterling output.

With all this in mind, Aarons has unsurprisingly been linked to many high profile Premier League clubs including Arsenal, Tottenham Hotspur, Chelsea and Manchester City. But the level headed talent noted he doesn’t read into any such speculation, instead preferring to focus on each match as it comes.

This approach is clearly working for him, as the sky is unquestionably the limit for the highly regarded starlet, as he’ll be working his socks off to propel the Canaries into the Premier League next season.

Wouldn’t that be the perfect accompaniment to his Young Player of the Year award.