Manchester City v Tottenham – The Art of Running Behind 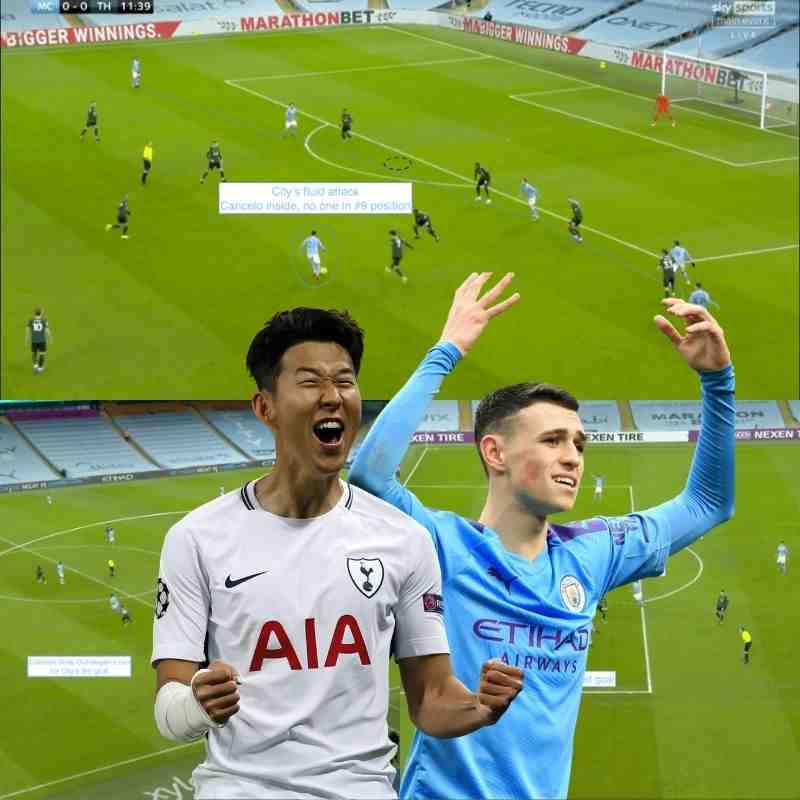 The blue moon is certainly rising in Manchester right now. As referee Paul Tierney blasted his whistle for the final time on Saturday evening, he signalled the extension of City’s winning run to 16 games. If they keep performing like that, there’s no reason they can’t win 16 more!

Barring an early scare from a sumptuous Kane free kick that cracked the upright, this was a game dominated by City from start to finish. A key feature of City’s performance was their consistent ability to run behind and fluidity of their attacking positioning. In possession, City often ended up 2.3.5 or even 2.2.6 – this meant they always had players in advanced positions to run forward whilst maintaining defensive balance to keep 2v1 vs Kane and controlling Tottenham’s other forwards.

With less than 2 minutes on the clock, City won their first corner from a passage of play that highlighted everything their victory was built upon. From the right, Foden, Jesus and Cancelo combined before the latter slid in the former. As Foden headed towards the by-line (only to be stopped by Højbjerg), City had 5 players inside the Tottenham box ready to pounce. 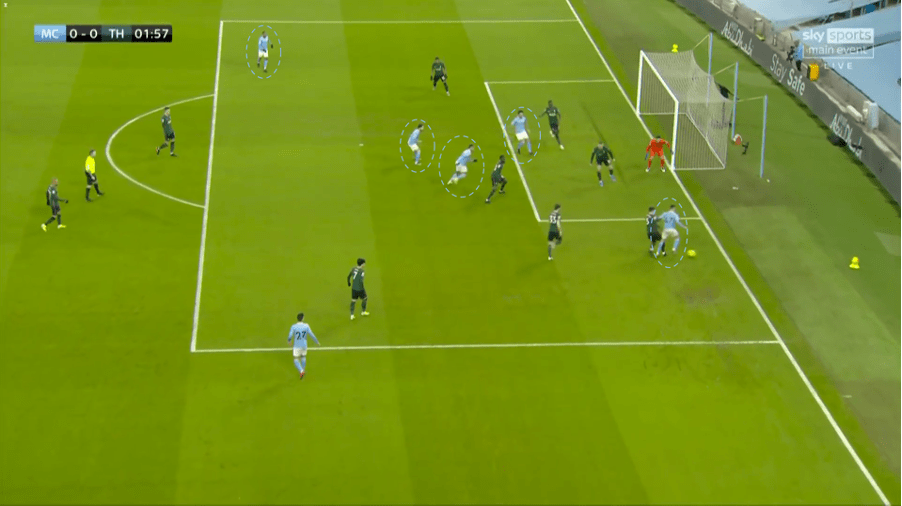 If we fast forward just a couple more minutes, we see the same tactics causing Spurs all sorts of problems again. With Cancelo taking up his position inside on this occasion (to create the 2.3.5 for City), they now have 5 attackers vs Spurs’ back 4; it’s a simple numbers game. Spurs’ left back Davies is unsure whether to press onto Bernardo Silva or hold his position with Foden. In the end, he does neither. Cancelo finds Foden’s run behind and only sound defensive word from Højbjerg stops City taking the lead. Jesus is next to get a shot off after again being found by the impressive Cancelo’s pass. The game is barely 10 minutes old and City have already created 3-4 threatening ‘moments’ by running behind the Tottenham defence. We’ve all heard of the red arrows but it’s safe to say that even they’ve started to turn blue! 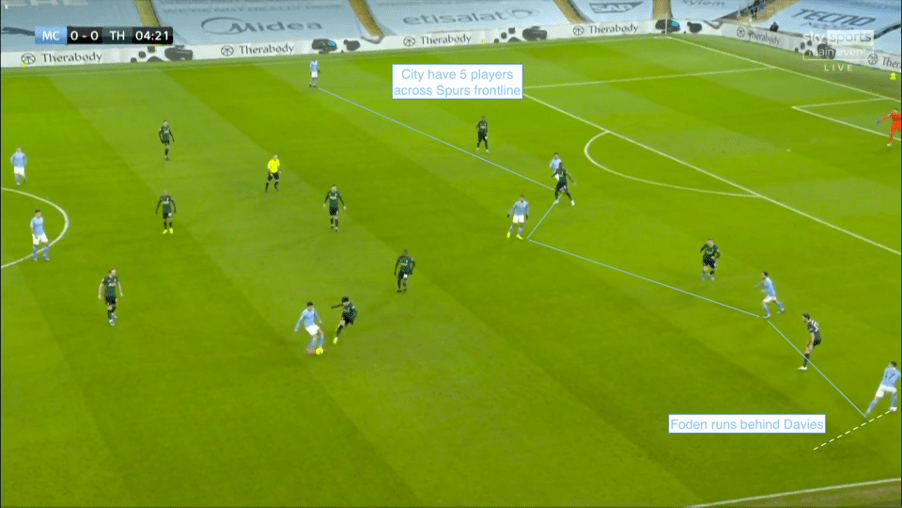 City’s opener (just like the rest of their goals on the night) came from a run behind. In a mirror image of their very first attack (however this time from the left), it was Zinchenko, Jesus and Gundogan combining. Gundogan latched onto Jesus through ball and Højbjerg clumsily brought him down. The result, City took the lead through Rodri’s penalty. It was night where in all honesty, Mourinho needed to park 5 buses to stop Pep’s City side. Their forwards kept making the runs and their defenders kept trying to find them. 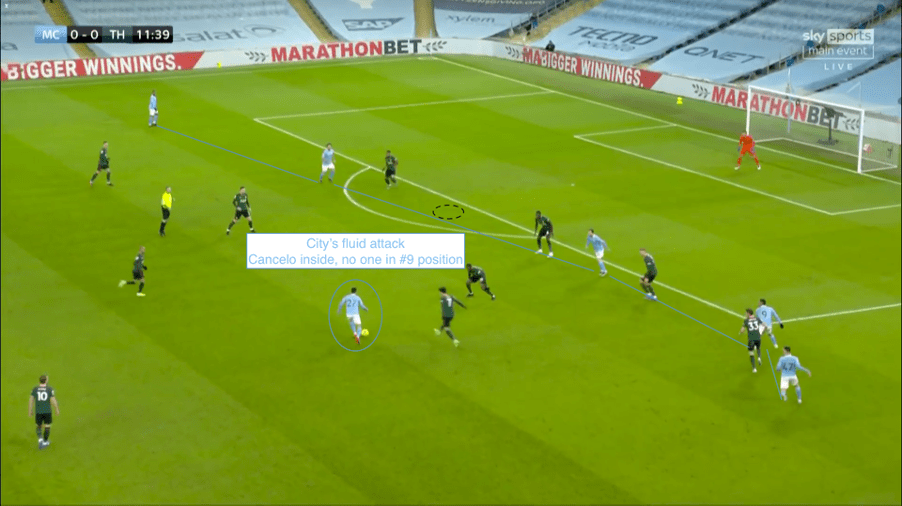 City’s final attack of the first half should really have made it 2-0. It was again Cancelo pulling the strings by playing a neat 1 two with Sterling. The England forward burst past Davies before pulling back to the onrushing Gundogan who’s shot was blocked by Sanchez. The elusive Cancelo was now inside the Tottenham box to pick up the 2nd ball well ahead of Son before unselfishness squaring for Jesus who should have at least hit the target / made it two.

The 2nd half was simply a continuation of everything that had come before. Just 6 minutes in and City made it 2-0. Sterling slid in Gundogan who beat the hapless Lloris at his near post. At the point of Sterlings’ pass for the run of Gundogan, City again had 5 players inside the Tottenham box. Tottenham had 7 defenders admiring Gundogan’s run… 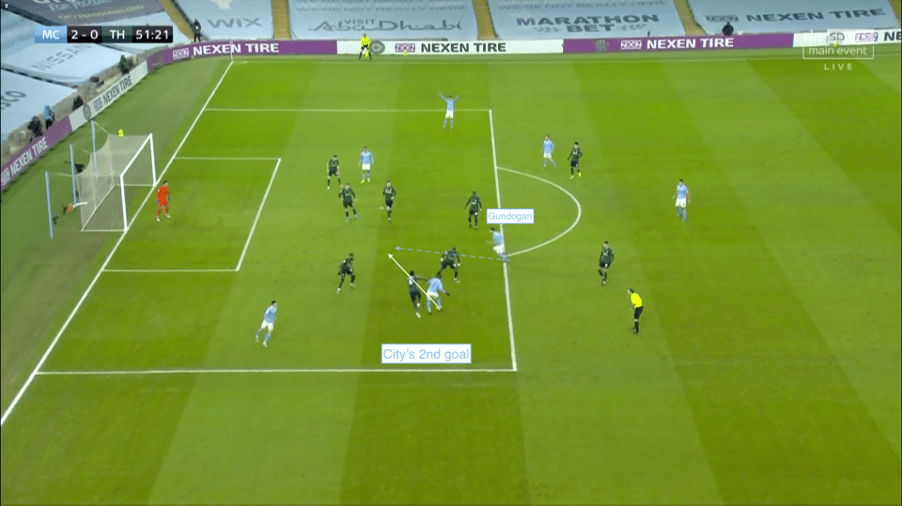 City’s third goal came from a threat that only they can pose. No other keeper in the Premier League can kick half as far as Guinness World Record holder Ederson. Not only does he possess the ability to kick far, he has the accuracy and vision of a world class #10. He effortlessly passed the ball 2/3’s of the pitch and picked out the umpteenth forward run of Gundogan. The German breezed past a weak challenge from Sanchez and City made it 3-0. It was an apt involvement for the City goalkeeper who was visibly disappointed when he wasn’t allowed to take City’s early penalty. He finished the night with a clean sheet and an assist, not something many goalkeepers will be able to say this season.

This was a comprehensive victory for City, built on there relentless ability to run forward and be flexible in their attacking positioning. 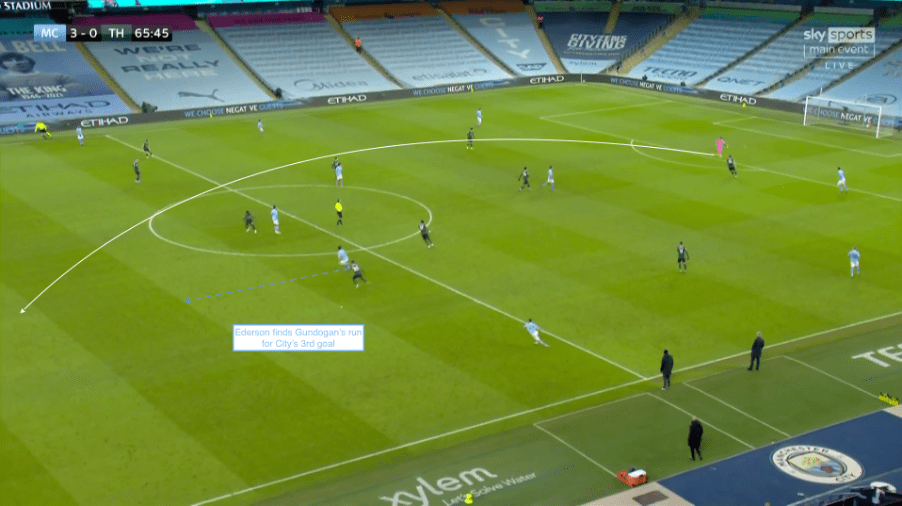