Having progressed immensely while on loan at Blackburn Rovers from Manchester City this season, Tosin Adarabioyo’s exemplified what a talent he is.

Slotting in brilliantly at the heart of defence alongside Darragh Lenihan, the 22-year-old’s adapted to another campaign in the hugely demanding Championship impressively. Full of ambition and drive, the man who’s previously stated he’d love to captain Manchester City one day, his immediate focus is helping Blackburn reach the playoffs. Sitting five points off the final playoff spot, there’s a decent chance Tony Mowbray’s men can achieve their goal.

Relishing the opportunity for vital first team action away from the Etihad, Adarabioyo’s made 32 appearances in all competitions, in a season where he’s come on in leaps and bounds. “I just felt like I needed to go out there and get some more games and prove what I can do. My aim has always been to get back to City and be a main player in that team. I felt I needed to go out again because last season I was predominantly playing right-back. I didn’t actually get to show what I can do,” he told the Guardian.

There’s no doubting he’s made the most of his chances, with him performing brilliantly in many areas of the game.

Analysing his defensive output, and he’s shown what a bright future he has, with there being much upside attached to his work. Standing a towering 196 cm tall and with good mobility for a man of his stature, this gives Adarabioyo a strong platform to compete in duels against his opponents.

A huge obstacle to overcome in aerial duels, he uses his size to win the majority of his headers. Also showing good judgement, strength to remain balanced and timing of his leaps, this duly compounds issues for adversaries, who struggle to get the better of him in this compartment. Applying his prowess to dealing with offensive and defensive corners, goal kicks, all types of set pieces and open play crosses and cutbacks, Adarabioyo’s been a handy asset.

Meanwhile, when it comes to ground duels, he transfers his awareness, timing and decision making over smoothly, with him often nipping in authoritatively to win back possession cleanly. In addition, his telescopic legs ensure he’s a tough man to beat 1v1, for he makes himself so wide from his powerful crouched stance. 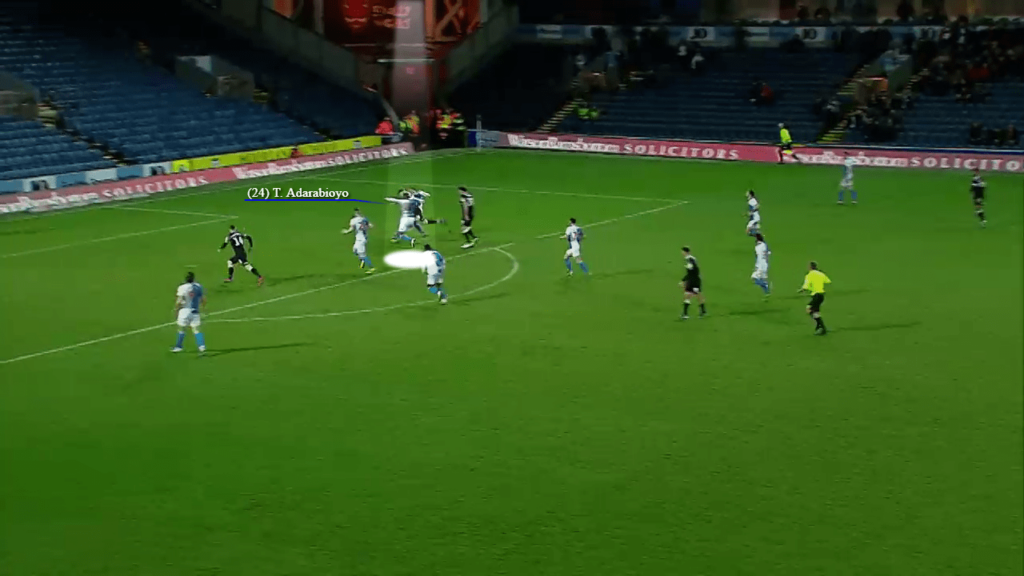 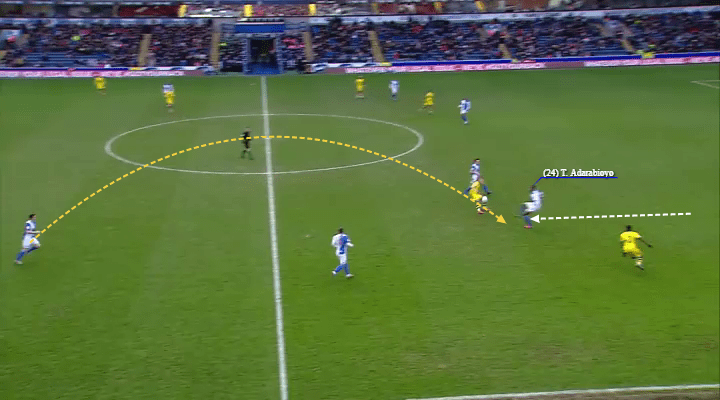 Keen to scan nearby areas, this means he gives himself an updated mental imagery of his surroundings so he can monitor opponents and not be caught out by blindside runners. Being such a big man, it can sometimes mean he takes a few strides to get up to speed, which makes this scanning crucial to him being awake to runners in behind. If required, his smarts benefit his team by way of him getting across to cover a colleague or taking over blown marking assignments. 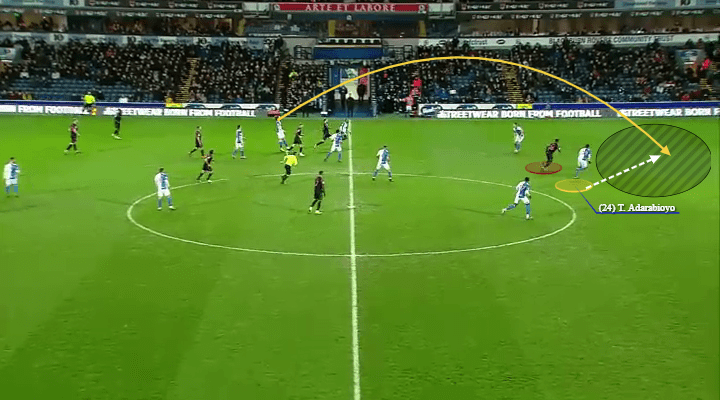 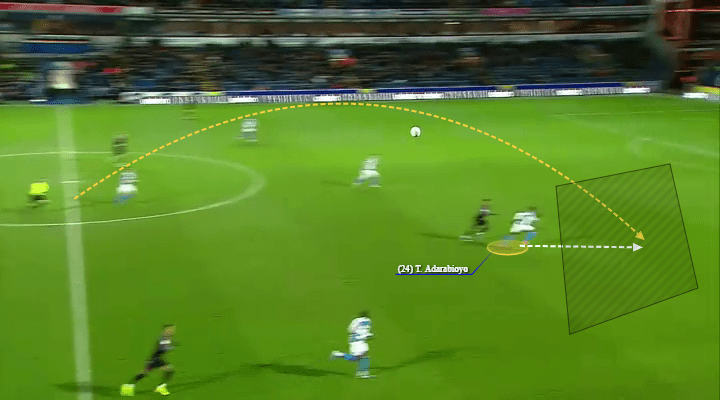 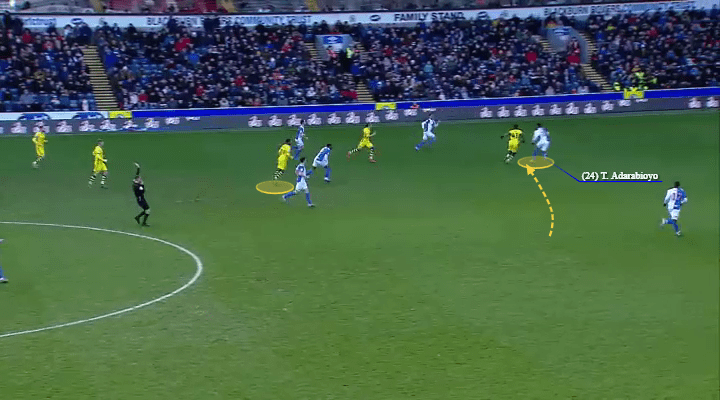 Knowing when to step out, shift across, drop back and organise the backline, watching him go about his stopping work has been littered with upside.

Two footed and well versed with the ball at his feet, his Manchester City upbringing shines through when he’s in possession. Able to strike passes with incision, confidence and clarity, Adarabioyo’s clear in his intent to beat the opposition’s first line of pressure. The fact he has a notable range of passing aids in him in his quest to do so, where his capacity to strike switches, through balls, line breaking ground balls or rapid short passes has caught the eye. 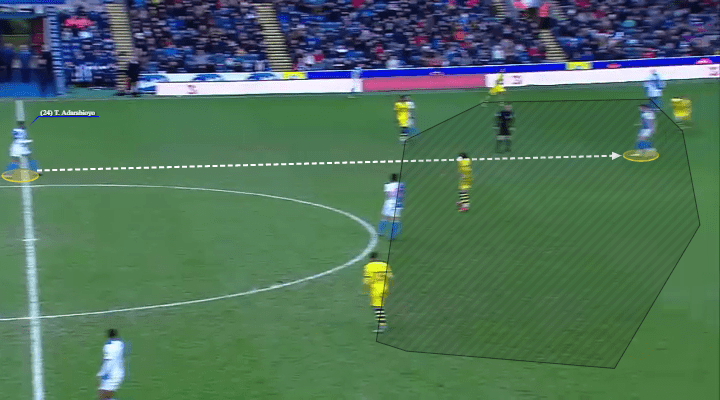 If an opportunity arises to carry the ball upfield, he’ll take it, with his aim being to provoke an opponent to press from midfield to then access the space left behind. So comfortable on the ball, how he can glide by opponents while gaining territory forward adds to his value.

If a progressive option isn’t available, he’ll calmly recirculate possession or put his foot on the ball while he waits for an option or an opponent to commit before releasing the ball.

Improving all the time under the watchful eye of Mowbray, Adarabioyo’s relishing his time with Blackburn. “I feel like this is a great platform for me to show what we do. From the get-go I knew he had belief in me and I think I’ve shown that,” he explained to the Lancashire Telegraph. “There’s been a few things I can improve on and a few things that he did as a centre half. He’s shown me certain things that can help me.”

“I’m playing in my preferred position as opposed to last season when I was at right-back. I feel I’m playing well. I think everything is coming together, out of possession and in possession as well.

While achieving his goal of being an integral figure at his parent club will be no easy task, you can guarantee the assured defender with a brilliant attitude will do everything in his power to turn his dreams into a reality.

For now, though, all his energy will be channeled towards Blackburn’s promotion playoffs push.