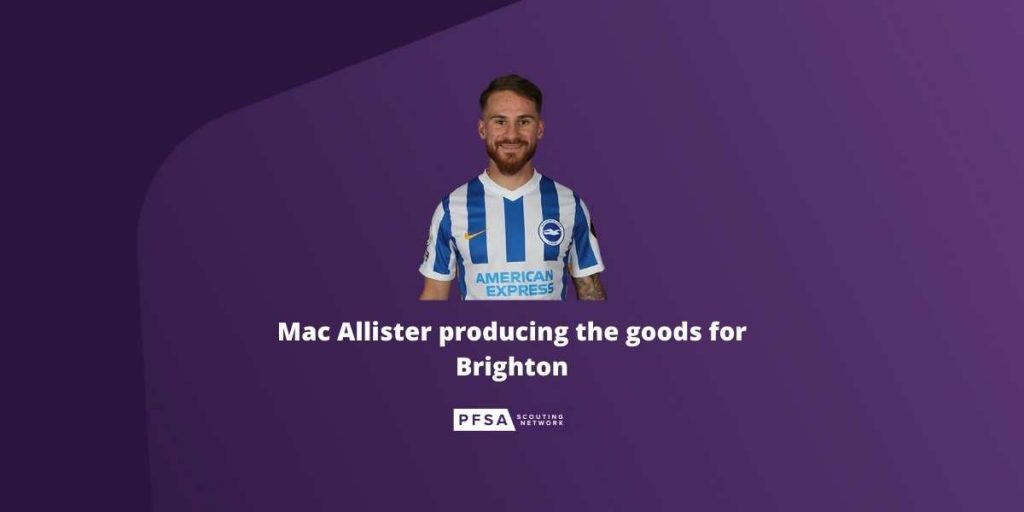 Unquestionably enjoying his best spell with Brighton and Hove Albion, it’s been a joy watching their Argentine maestro, Alexis Mac Allister, playing at such a high level.

Having started the Seagulls’ last five Premier League matches, there’s no doubting what a key figure he’s grown into for Graham Potter’s men. Able to play in a variety of positions and roles across the midfield and attacking lines, his versatility has been crucial for Potter, who loves adapting his setup frequently.

Enjoying valuable continuity and oozing confidence at present, the 23-year-old’s making the most of his opportunities. Getting better with every passing week, his man of the match outing against Everton, where he scored a brilliant brace, and his fine showings vs. Chelsea, have underlined his immense progress.

Although he’s only notched up 750 minutes of league action, he’s still registered an admirable four goals and two assists. Not bad at all, considering he often plays in midfield and that the Seagulls have struggled to find the back of the net in patches.

So intelligent with his off the ball movement, this has unquestionably been one of the keys towards his success. Posing a major threat with his crafty positioning to receive between lines, he chooses wisely when to venture into these zones.

Alert to things like an opponent being preoccupied, a passing lane opening up or if a teammate has drawn away their marker, Mac Allister’s persistent scanning, in combination with his reading of the play, has also been vital. The way he often receives in forward facing postures has helped him massively to immediately add momentum into attacks, which is far more preferable than getting the ball back to goal. 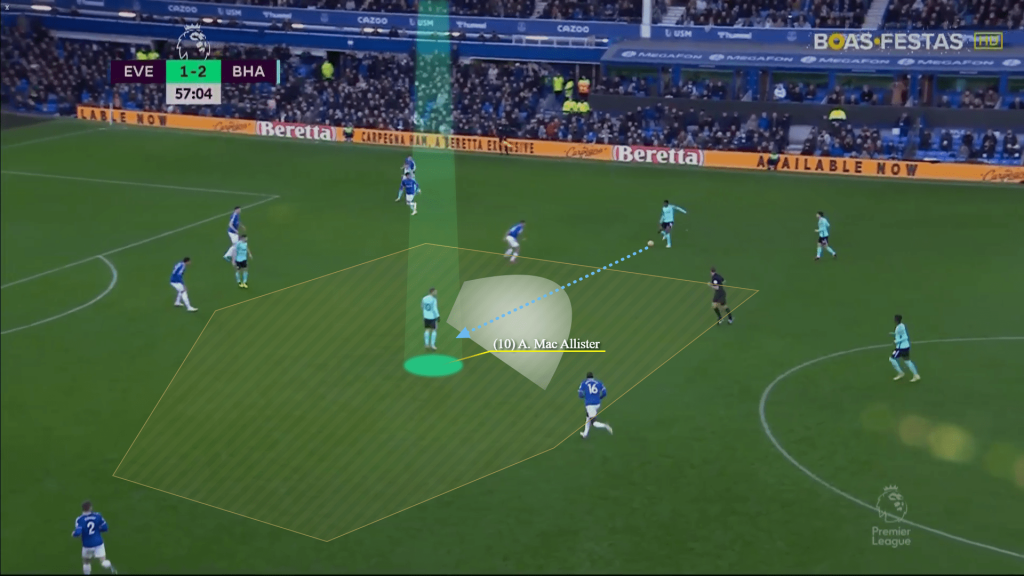 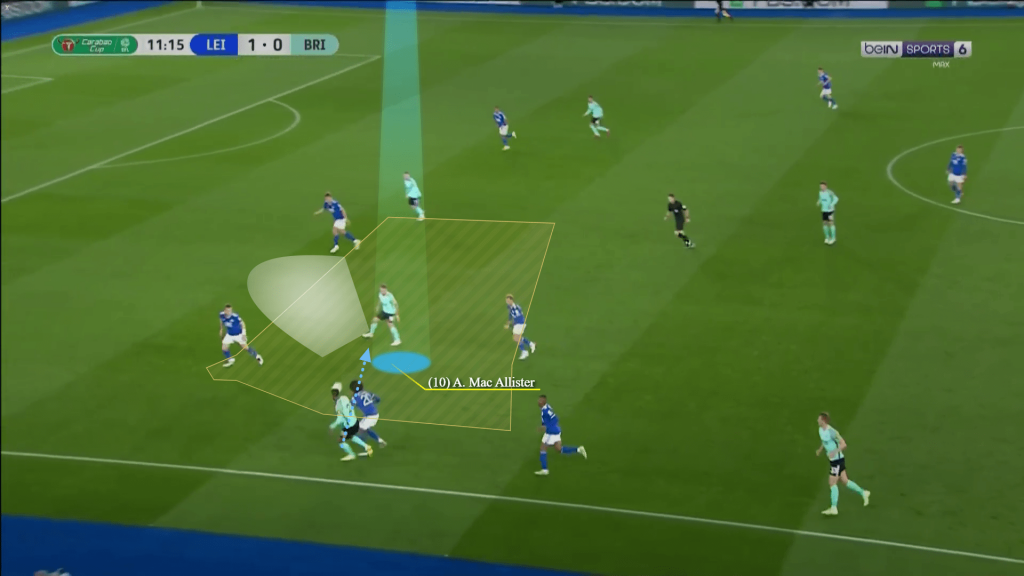 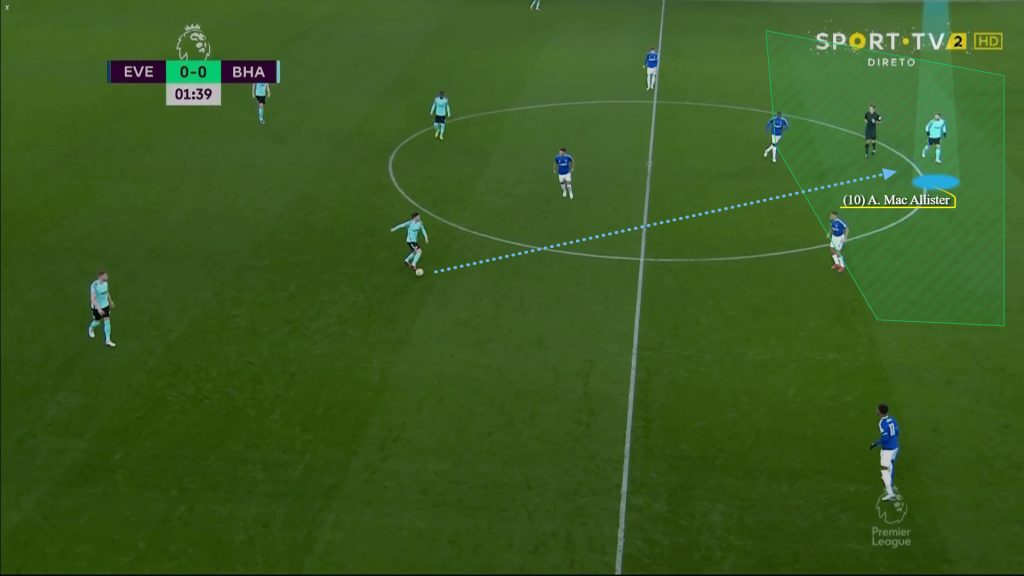 His aptitude here also sees him recognise when he can form advantageous overloads in central midfield or provide valuable support to wide attacks, in order to help Brighton progress smoothly up the pitch. Being adept at pushing into the half spaces to connect moves means he can get on the ball away from heavily populated central zones so he can enjoy extra time and space on the ball to execute his actions. 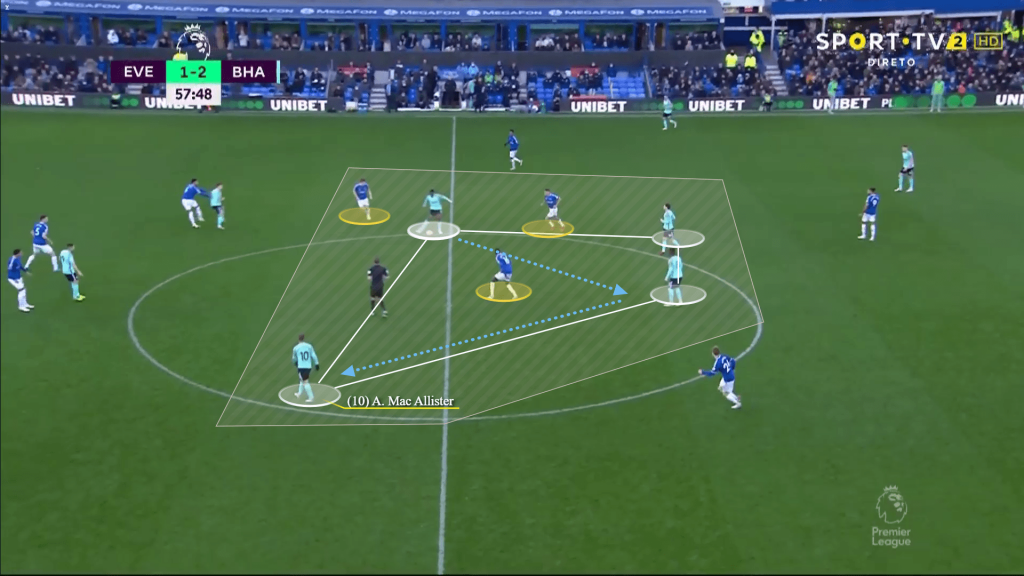 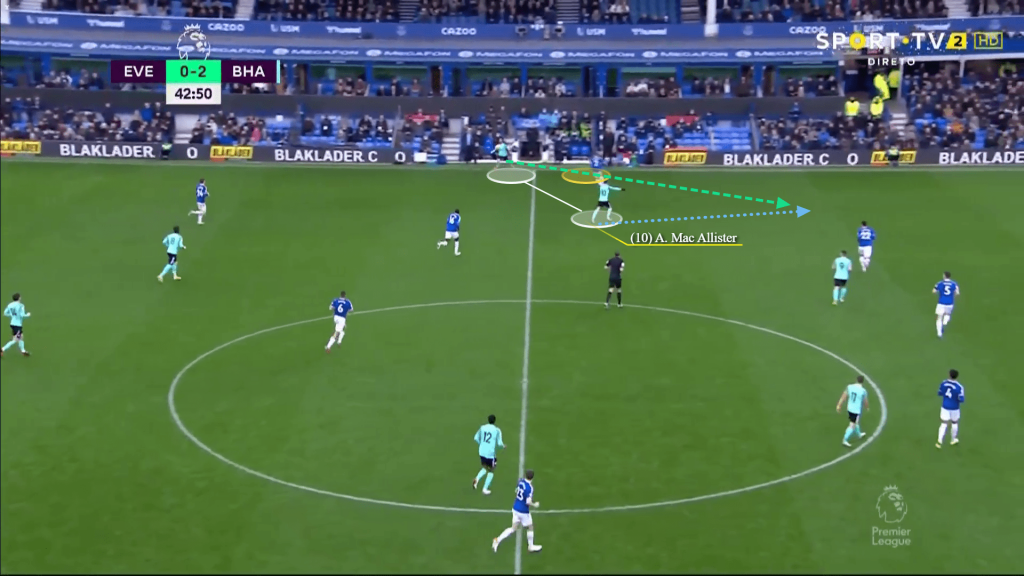 Mac Allister’s capacity to crisply rotate with his teammates from whatever his nominal post is has been another string to his bow. Whether interchanging with his strikers, wingers, central midfielders or fullbacks (or wingbacks), he’s done so cleanly to help Brighton manipulate defensive shapes and add variety to their offensive patterns.

Awake to gaps within opposition structures, his penetrative runs from deep have caused plenty of problems for defenders. Getting into the box undetected and subsequently able to target vacant areas, the former Boca Juniors man offers his teammates a fine option for crosses and cutbacks into the box from wide. In addition, these surges ensure he can stretch backlines to generate room for others by occupying markers and provide a threat in behind. 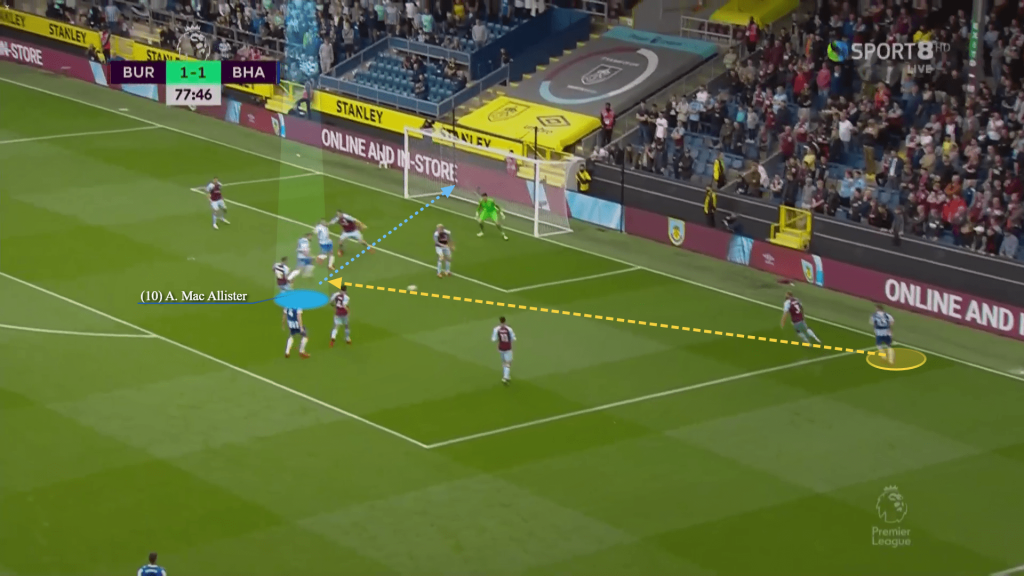 By the numbers, his 3.17 touches inside the box per 90 and 4.92 progressive pass receptions p90, which place him in the top three and five percent respectively in Europe’s top five leagues among players in his position, demonstrates his smarts in this compartment.

Technically neat and tidy, he boasts a lovely first touch and ultra close control, thus enabling him to weave away from danger, beat opponents, lure out trackers and protect the ball effectively. A master at altering his body posture prior to receiving, this means he can shield the ball from incoming possession, spin away from danger, take his first touch away from the pressure to continue the attack or get himself prepared to lay the ball off quickly.

Possessing a low centre of gravity and being strong, the tenacious Argentine’s physicality means he can hold off opponents, withstand pressure comfortably and win fouls due to foes getting frustrated by his ball retention powers.

Always eager to breathe life into attacks with his ball carrying, the fact he ranks in the top 32% among players in his position across Europe’s top five leagues for progressive carries (4.53 p90) underlines his worth here.

Offering Brighton imagination, control and precision with his passing, he contributes heavily through his incision here. Full of poise, composure and so good at spotting runners, the way he obliges runners with crafty through balls over the top and on the ground has been terrific to see. Measuring and weighting his passes ideally for teammates to run onto, it’s impressive how he executes his deliveries. 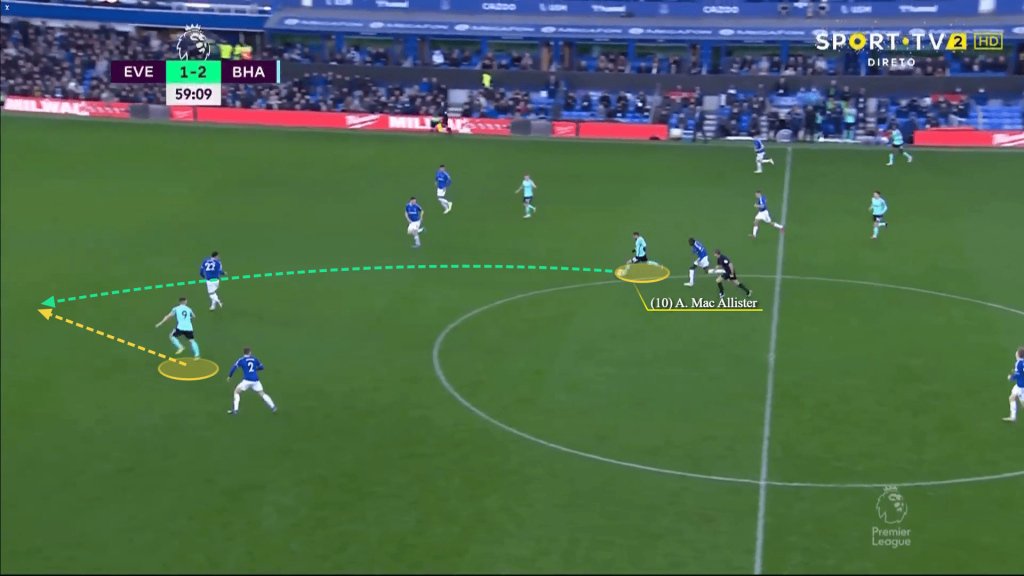 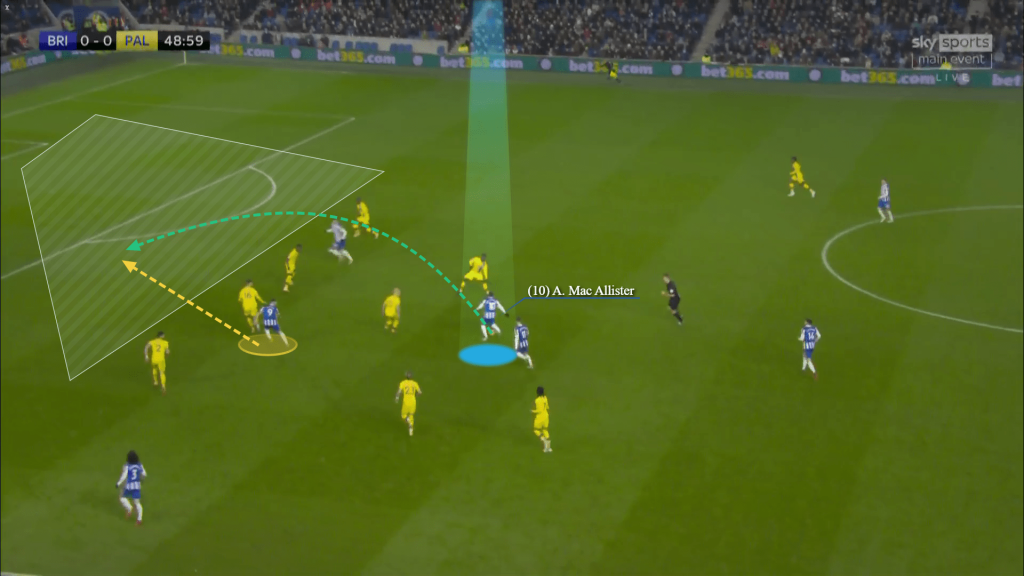 The aforementioned also extends to his expert set piece taking, which sees him fire in a fantastic range of corners and free kicks from all over the final third. Whether striking the ball with power, loft, dip, swerve, inswing or outswing, his silver service ensures he’s a weapon at creating chances for others and when in shooting range. 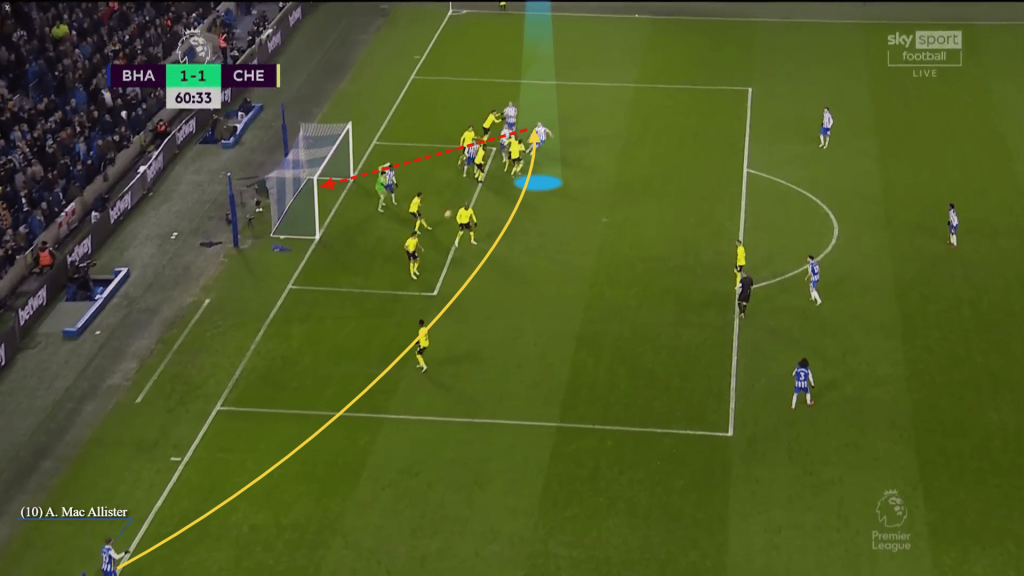 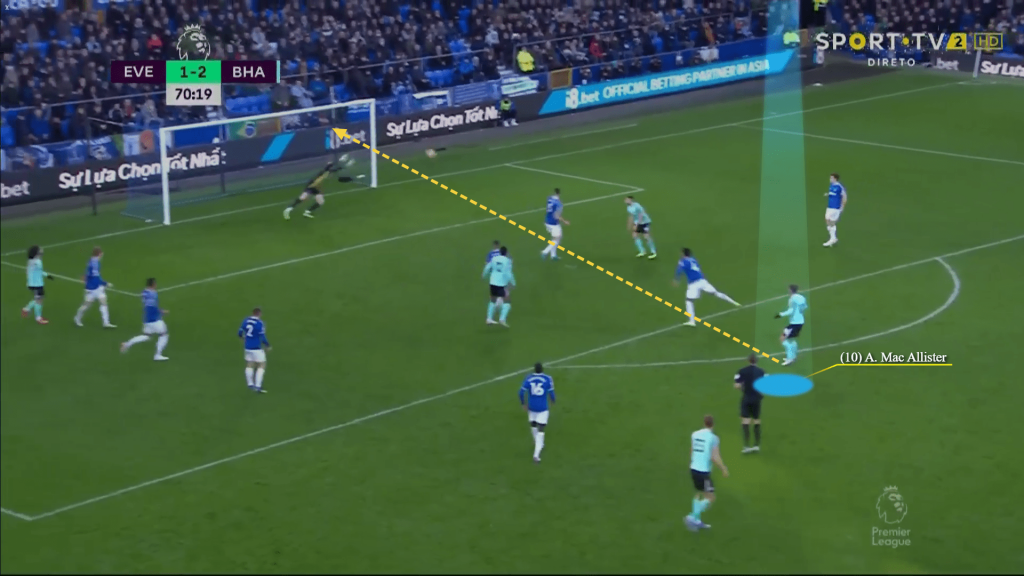 Engaging in intricate combination play as well, Mac Allister excels at hitting one and two touch lay offs, plus backheels and flicks. In doing so, these types of passes importantly move defensive shapes and allow Brighton to quickly cut through them due to the speed they can move the ball in close quarters. Marrying rapid exchanges and off the ball movement has certainly paid off on many exchanges for the Seagulls.

Also competent at hitting raking switches of play and striking line breaking passes to bypass many opponents at once, there’s no doubting his touch of class has been a big boost to his side. Indeed, his 3.22 shot creating actions p90 (top nine percent), 0.13 expected assists p90 (top 17 percent) and 0.11 assists p90 (top 31 percent) underline his passing skills.

Showcasing his keen eye for goal and solid finishing during this campaign too, ranking in the top two percent for shots p90 (2.49), top eight percent for non penalty Expected Goals p90 (0 17) and top 10 percent for goals p90 (0.17) highlights his menace.

An elite presser, tackler and ball winner to boot, this duly adds what an asset he is to Potter’s high flying Seagulls.

Although it hasn’t all been plain sailing for him since joining Brighton due to things like the pandemic and the heavy competition for places, Mac Allister deserves credit for sticking at it, which he’s now been rewarded for. “He’s been working away. Sometimes you have to select players and not select players who can play and should play,” Potter told The Athletic.

“You can only pick 11 and Alexis has had to wait and be patient. He’s done that. He’s contributed from the bench, he’s been an important team player for us, and now he’s starting. He’s in a good moment. We were still thinking before the game, ‘Can he go again?’ but he’s in a really good place. Confidence is high and when you are in that moment, it’s nice to keep going.”

Able to score, create, breathe life into attacks with his ingenuity on the ball and get stuck in defensively, it’s understandable why he’s developed into a fan favourite at Brighton. Making huge strides already this season, it’ll now be intriguing to see how he fares in the second half of the campaign under the watchful eye of Potter.