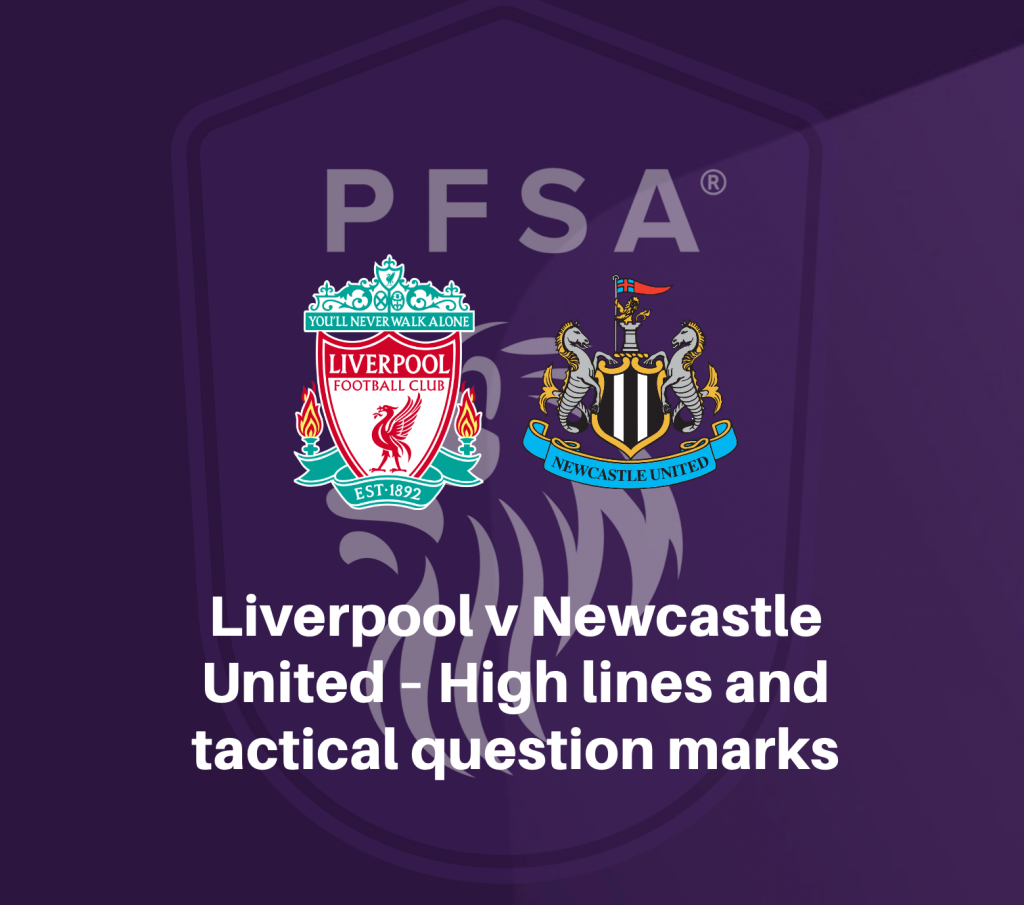 BT sport named Liverpool’s Thiago Alcantara as man of the match for Liverpool’s 1-1 draw with Newcastle United. At that point, the clock was just past the 90 minute mark and Liverpool were leading 1-0. Thiago finished the match with 94% passing accuracy and Steve McManaman raving about his ability to keep Liverpool ticking. All of the above is true. We know how technically proficient Thiago is on the ball, he possesses the passing range and vision comparable with some of the best players to ever play the game. However, in this current Liverpool team with Klopp’s adapted tactical system, does he cause more harm than good?

Liverpool’s recent success has been built around the 4.3.3 system. They’ve always played with two expansive, attacking full backs and three energetic, mobile and tenacious players in the middle of midfield. The sparkling form of Diogo Jota has given Jurgen Klopp a real selection headache. The former Wolves man simply can’t be dropped, whilst Klopp seems adamant on maintaining starting spots for Mane, Salah and Firmino. Liverpool end up being 4.2.4 in possession now. The full backs continue to bomb forward and Liverpool effectively attack with six players and defend with four. Now more than ever, Liverpool need tenacity and energy from their central midfielders. Not only have they lost a player numerically in the middle of the pitch, they’ve in essence lost two; as Thiago simply doesn’t possess the workman like qualities of every other central midfielder Liverpool have on their books (Henderson, Milner, Keita, Fabinho and Wijnaldum).

Even before Salah had put Liverpool 1-0 ahead (after only three minutes), Liverpool were given their first warning sign in the early opening exchanges. Thiago lost a duel after a Liverpool attack broke down and Saint-Maximin should really have slid Jacob Murphy through for a 1v1 against Alisson. It would be this lack of ability to control the counter that became a leading narrative for this match as Newcastle broke out time and time again. 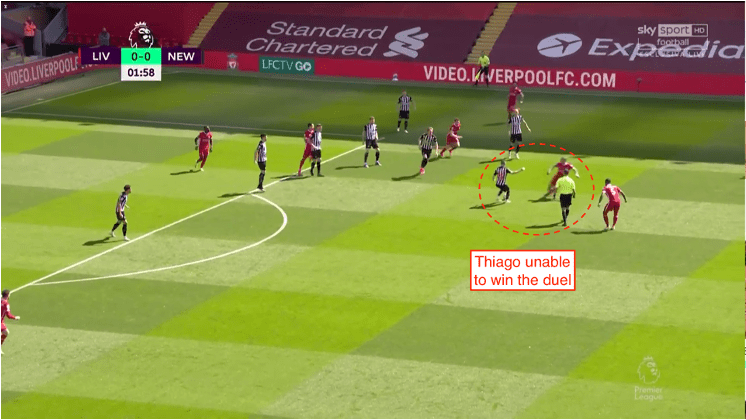 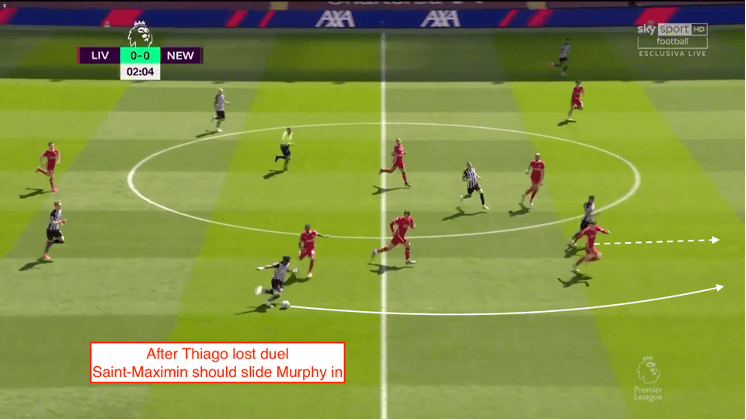 The infectious Saint-Maximin caused Liverpool all sorts of problems inside the opening ten minutes. Liverpool’s attacking six lost the ball and now the exposed midfield two of Wijnaldum and Thiago are unable to stop Newcastle’s transition. Kabak is forced to hack down the Frenchman and take a yellow for the team, leaving him on a tightrope for 80+ minutes vs the pacey Saint-Maximin. If he hadn’t made the tackle, Liverpool would have been 1v2 on their own halfway line –the balance of the team looks all wrong. 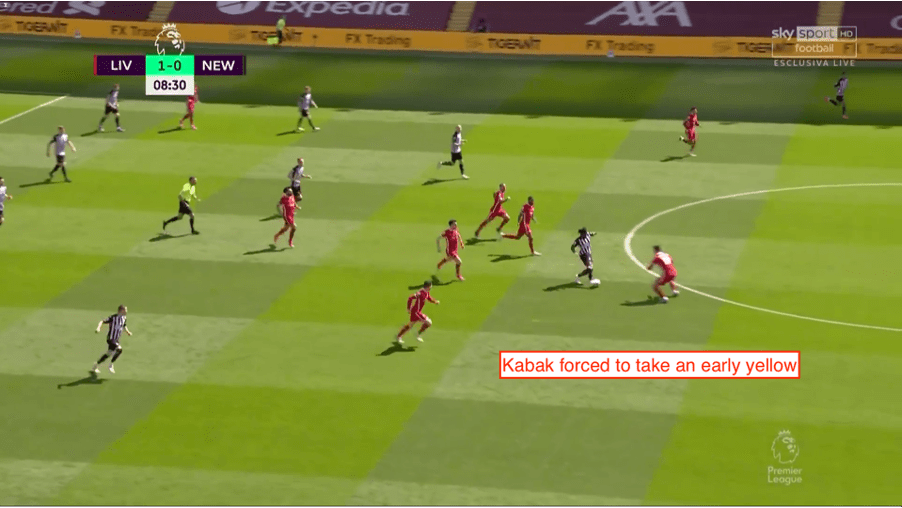 Another part of the game where Liverpool’s tactics have to be questioned, was their insistence of holding a high defensive line; even without any pressure on the ball. The Newcastle forwards duly obliged and  continued to attack that space and make forward throughout the match. Liverpool were very fortunate that often, Newcastle made the wrong last pass or just strayed the wrong of the offside line at key moments. After 14 minutes Saint-Maximin was just offside after been slid in by the un pressured Murphy and only five minutes later, Liverpool’s suicidal high line was carved open again by Shelvey’s long pass. Longstaff’s clever midfield run really should have levelled for the Geordies, only to be thwarted by Alisson in the Liverpool goal. 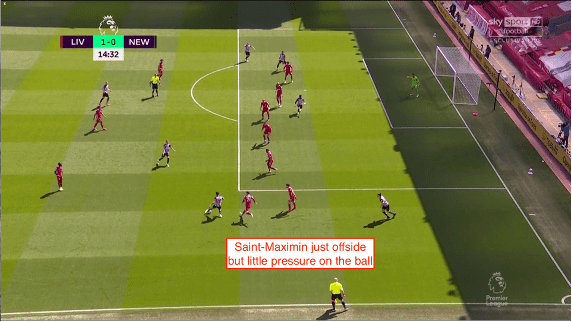 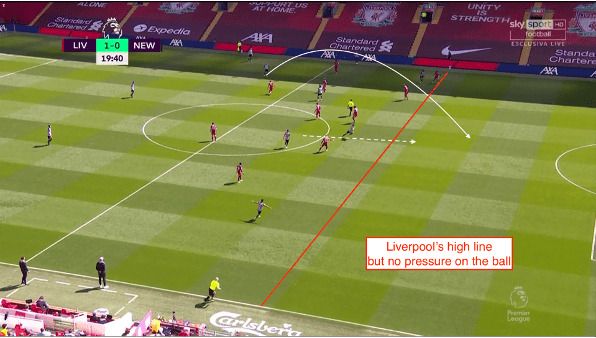 Thiago showed everything that we know he possesses in this match, with some great switches of play and fizzed in passes to break Newcastle’s midfield line. As much as his best moment’s were good, it would be his lack of tenacity and mobility to manage the transition along with that Liverpool high back line that would be the ultimate undoing for the reds in their top 4 hopes. If Thiago is to keep his starting spot, it looks imperative that Klopp sticks with his favoured 4.3.3 formation and one of the goal shy Mane or Firmino might have to be sacrificed to allow Jota’s good form to continue. If this game is to be the yard stick however, then Thiago might have to be sacrificed to give Liverpool the best chance of reaching the top four. Without three energetic midfielders, Liverpool look unable to contain and starve the opposition as they have in previous years. Newcastle have given the perfect blue print for the rest of Liverpool’s opponents if Klopp persists with this change of system and personnel. 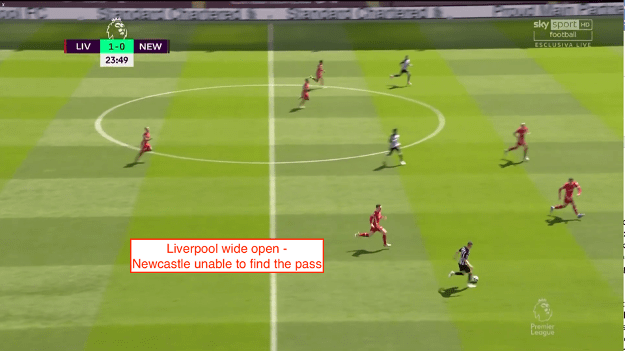 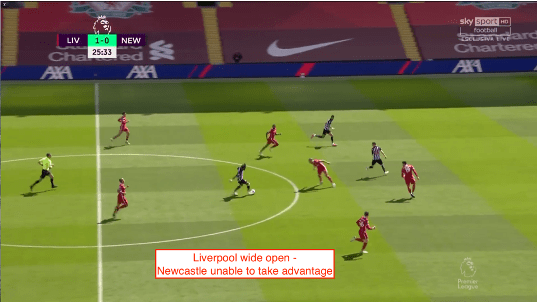 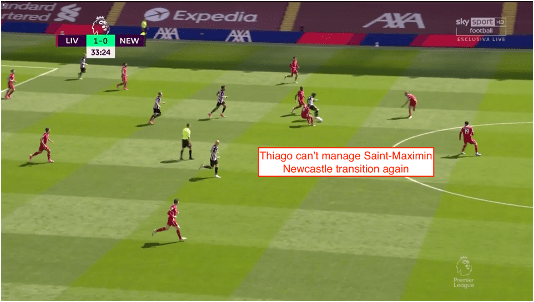