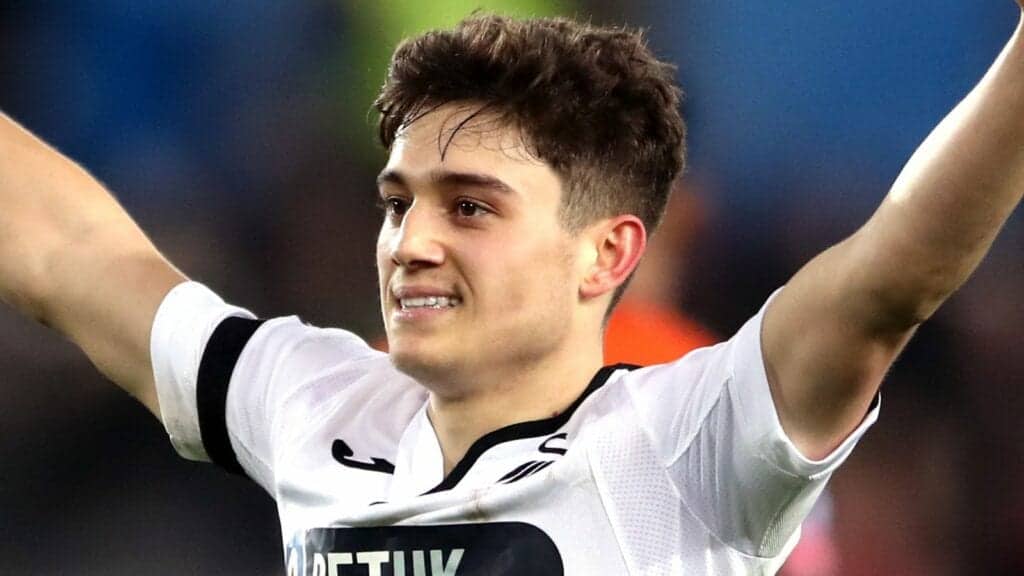 Daniel James’ future has been one of the most talked about transfer stories in recent weeks, with the Swansea City starlet being linked with a host of clubs.

Reportedly being hunted by the likes of Manchester United, Newcastle United, Bournemouth and Leeds United, who he almost joined in January, he’s certainly a man in demand. Apparently at this stage Man Utd are the frontrunners for his signature, with £15 million the figure being alleged, which isn’t bad at all for a player with so much talent and with such immense scope for improvement.

Thriving under Graham Potter’s tutelage, the versatile attacker who’s at his best on the left wing but capable of operating in basically any central or wide position across the attacking third, has been a real breakout star of the Championship. Bagging five goals and registering 10 assists, the former Hull City academy member’s been an integral element of this exciting, aesthetically pleasing Swans side.

So impressed by his young charge and how he’s coped against Premier League competition in cup action, Potter’s of the belief he’s got what it takes to be make it to the top. “It is not for me to announce values and prices. (But) against Manchester City (in the FA Cup in March) he matches the physicality of Kyle Walker, for example, and runs away from players at that level,” he commented.

“That’s a direct comparison against Premier League players at the very top and you can see his quality. He plays alongside Gareth Bale (for Wales) and doesn’t look out of place. You look at his attributes and how he influences games at Championship level. He causes teams real, real problems.”

Boasting searing pace and shrewd movement, these two aspects of his game parlay superbly to form the foundation of his multifaceted skill set. Always on the lookout for gaps to exploit within the opposition structure, once he sees an opening, the way he cleverly directs and angles his runs in behind are crucial towards him breaking through. 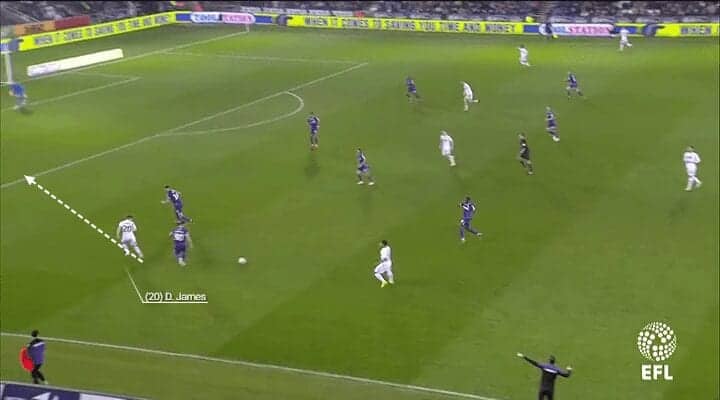 So hard to catch once he’s in full flight, there’s no stopping him if he reaches the ball first due to his scintillating speed. As a result of this, this forces defenders to shift across and commit numbers to stop him, which consequently can free up a teammate inside the final third.

In addition, his movement also serves him well when he embarks on blindside runs towards the back post, where he uses his dynamic advantage over his more stationary marker to tailor his runs to give himself every opportunity of getting to the ball first. 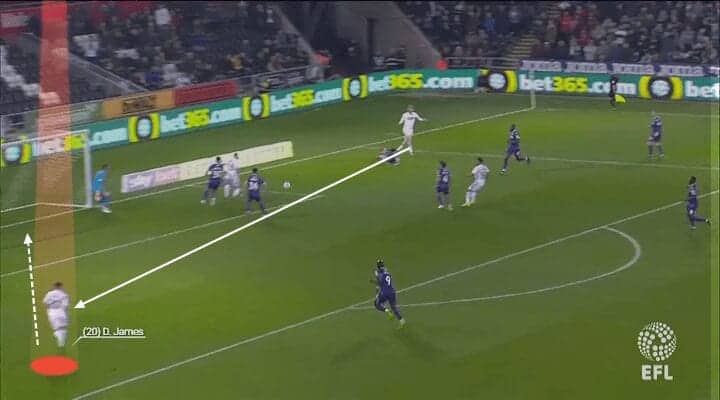 Another notable byproduct of his probing depth runs come from how they cause the defensive line to drop deeper, thus widening the space between the lines for colleagues to utilise.

Accompanying the above with his mesmerising dribbling qualities, the agile attacker’s a tremendously challenging proposition for any defender to stop. Aside from his breathtaking pace, he also possesses a wicked burst of acceleration and changes direction at such velocity that he regularly finds joy when cutting inside diagonally to charge at the defence and get into shooting positions. The way he does this so quickly that his man can’t react in time closely resembles how Arjen Robben does so.

Skilful and using some neat feints, shimmies and shoulder drops to amplify his capacity to beat his man, his 1v1 ability is a huge weapon for Swansea both in regular attacking phases or in transition. His close control vitally remains in tact when carrying the ball at speed, making him a major threat while ensuring he’s frequently fouled in ideal advanced locations. The fact he was the fourth most fouled player in the Championship (2.93 times per game) serves as a testament to his elusiveness. 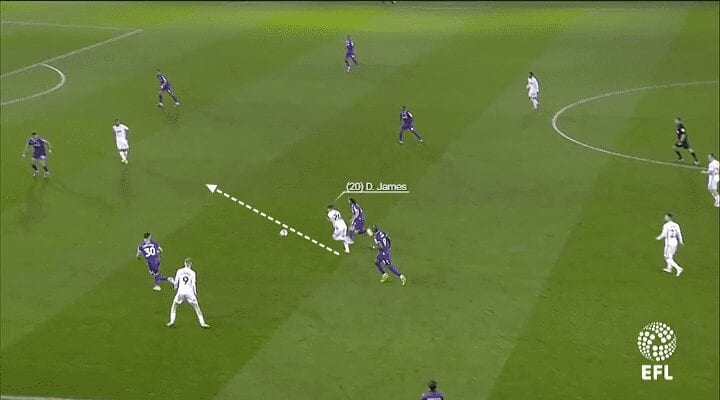 Moreover, the way Potter intelligently implements the overload to isolate principle to ensure he can receive in advantageous 1v1 isolation instances out wide is another way he supplies a threat. 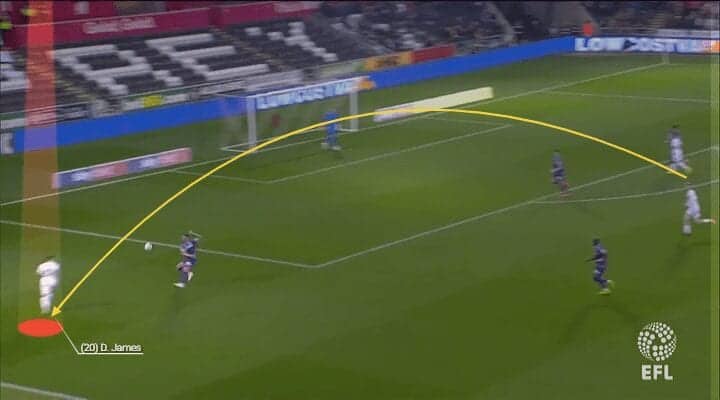 Strong on the ball, nicely balanced and possessing a low centre of gravity, this also sees him prove his worth when dropping deep with his back to goal, for he’s tough to outmuscle and can weave out of trouble smoothly. So comfortable under pressure, he handles confined space situations well, and regularly finds a way to overcome the harrying by wriggling away with a piece of skill or with a coherent pass. 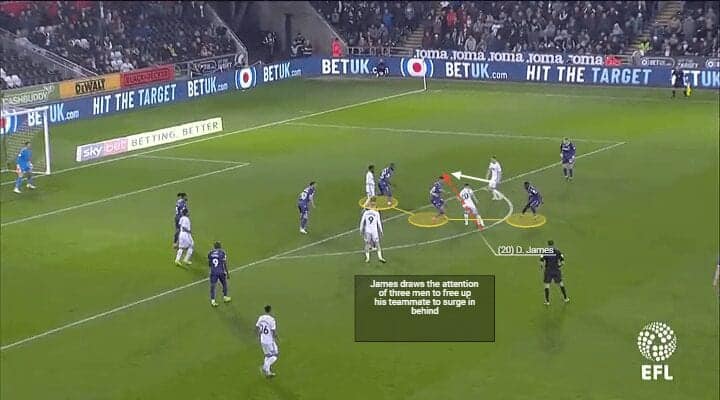 To continue on the theme of his passing, and he’s gaining in influence all the time in this compartment. Very competent combining intricately in close quarters with some classy one and two touch passes, and with some wicked one-twos, this is key towards unbalancing backlines to generate space, which allows him or a colleague to receive in forward facing body postures.

By playing some incisive through balls, switching the play ably and by whipping in some accurate crosses and cutbacks, his distribution only adds to his menace. 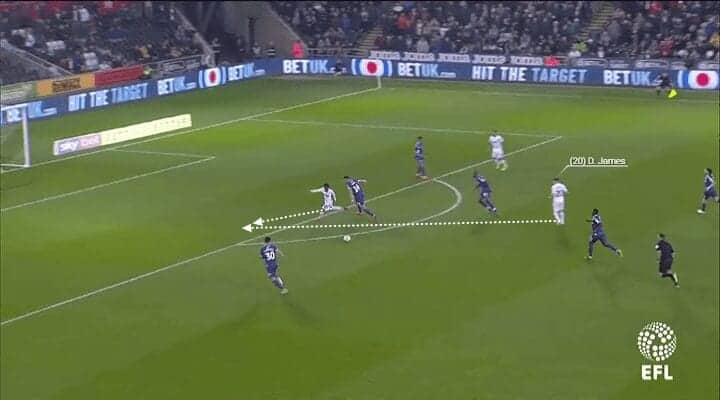 Wales coach, Ryan Giggs, summed up the gifted prospect aptly when recently speaking on James, who made his full international debut back in November. “He’s a talent. When you’ve got that raw pace, you’re a threat at any level so as a winger, obviously for me playing as a winger, when I was younger, you then have to develop the other parts of your game which I feel he is doing,” he gleamed.

“He’s played up front as well which will help him because that gives you an appreciation of what you need to do.”

By the numbers, some extra statistics that catch the eye arise from how he completed the third most progressive runs in the Championship on 3.64 per game, was in the top 20 for dribbles pg with 5.14, ranked 16th for touches in the box pg with 4.11, clocked in 26th for crossing accuracy at 38.3%, produced 1.27 shot assists pg and unleashed 2.66 shots pg.

Already looking destined for the top at this stage of his young career, it’s frightening to think his best is still yet to come, which is why so many clubs are scampering to acquire his services. The race is certainly on to get James, but he’ll need to choose carefully where he plies his trade next term, for he’ll want to go to a club where he can keep up his upward trajectory and not stagnate.

Whatever happens, it’ll be very intriguing indeed monitoring the progress of the electrifying attacker, as all the signs are pointing towards him being a star in the making.