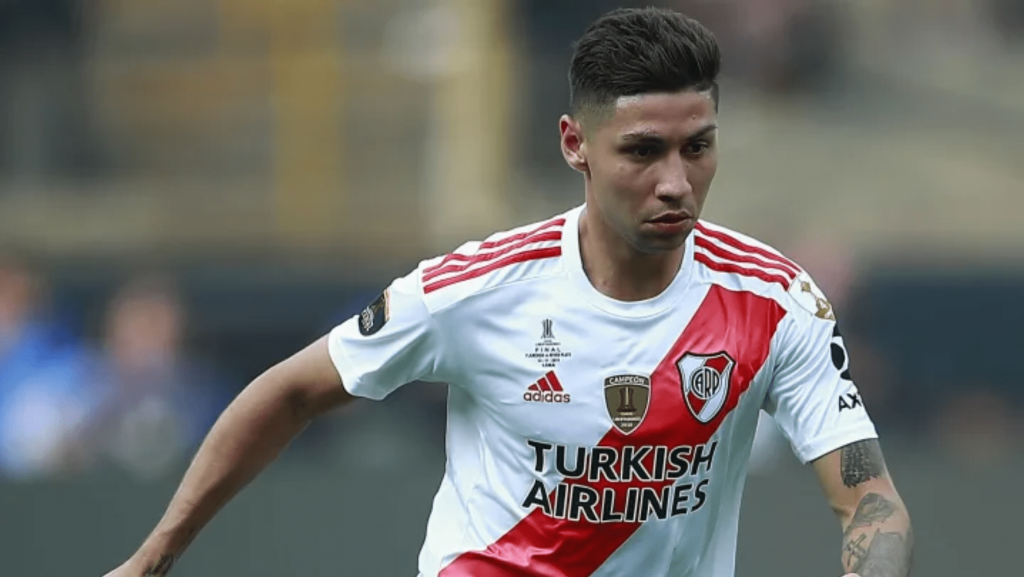 Having established himself as not only one of the best right backs in South America, but also one of the finest players overall on the continent, it’s little wonder plenty of teams are showing interest in Gonzalo Montiel.

A regular for Argentina at international level and one of the stars of Marcelo Gallardo’s exceptional River Plate team, he’s progressed impressively since making his Los Millonarios debut back in 2016.

Consistent and reliable in both phases of the game, Montiel would be a fine reinforcement for many sides. While he’s also capable of playing in midfield as a winger, the majority of his minutes should come at right back or right wingback, where he produces his best efforts.

The fact he’s worked under the tactically sophisticated Gallardo and operated in many different systems with both four and five man backlines will hold him in good stead to adapt to any manager’s setup too. Full of knowledge and tactically disciplined, he would therefore have no trouble getting up to speed to slot straight into any team when called upon.

Naturally, whenever players arrive from South America concerns arise how they’ll adjust to the step up in class, but in the case of Montiel, this shouldn’t be an issue. Playing all but six minutes for Lionel Scaloni’s Argentina in their four World Cup 2022 qualifiers, where he’s establishing himself admirably, plus 110 matches for River in his career, including 40 Copa Libertadores clashes, he joins with plenty of high level experience.

Considering the aforementioned, it’s hardly surprising the likes of AS Roma, Lyon, West Ham United and Villarreal are keen on securing him.

Excellent offensively and always eager to contribute, he’d be a huge asset going forward. Possessing an excellent passing game, Montiel’s aptitude here has ensured he’s a key part of Gallardo’s possession based style, as he’s crucial in build up, ball circulation and creating openings in the final third.

Accurate, incisive and weighting his passes well for the most part, he’s excellent at progressing the ball into his midfielders and into the feet of his attackers. A particular highlight from his River days has been his diagonal passes to the feet of striker Rafael Santos Borre, which can move defensive lines vertically and horizontally, before Santos Borre would then play a one touch pass to a third man runner out wide. The way he disguises his passes by using his eyes by looking in a different direction before passing elsewhere is another handy weapon of his to unbalance backlines. 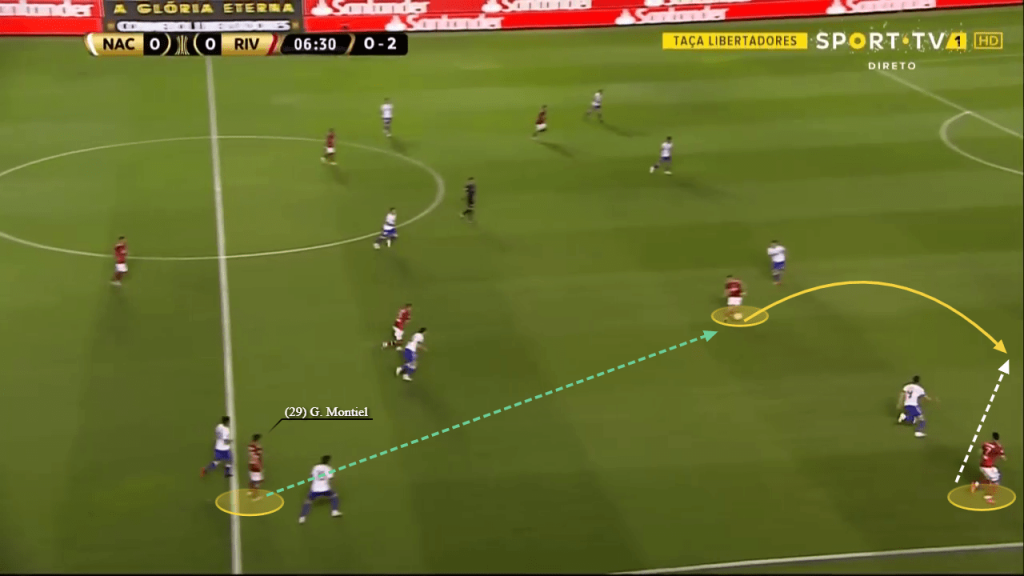 While adept at finding teammates between the lines, he’s also good at striking wicked crosses and cutbacks and through balls in behind or down the channels. Assessing his options efficiently and quick to spot runners’ movements, he tailors his deliveries accordingly.

To focus on his crossing game, and this is a crucial weapon in his armoury, as he typically connects crisply to oblige his teammates in the box with pinpoint deliveries to the near or far post and into the six yard area. Adjusting the amount of dip, whip, swerve, loft and power he puts on his deliveries has enhanced his value when firing in crosses too. 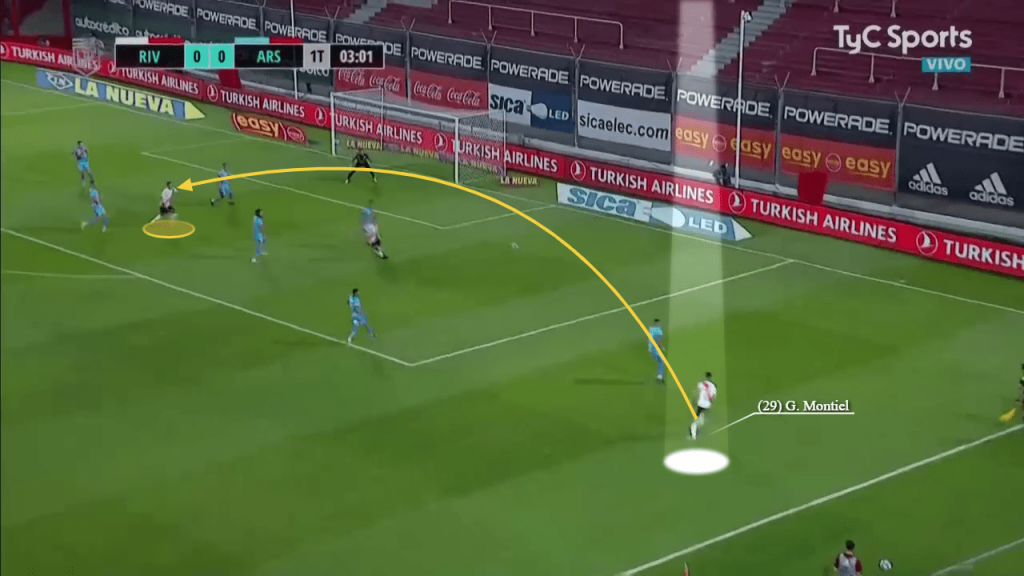 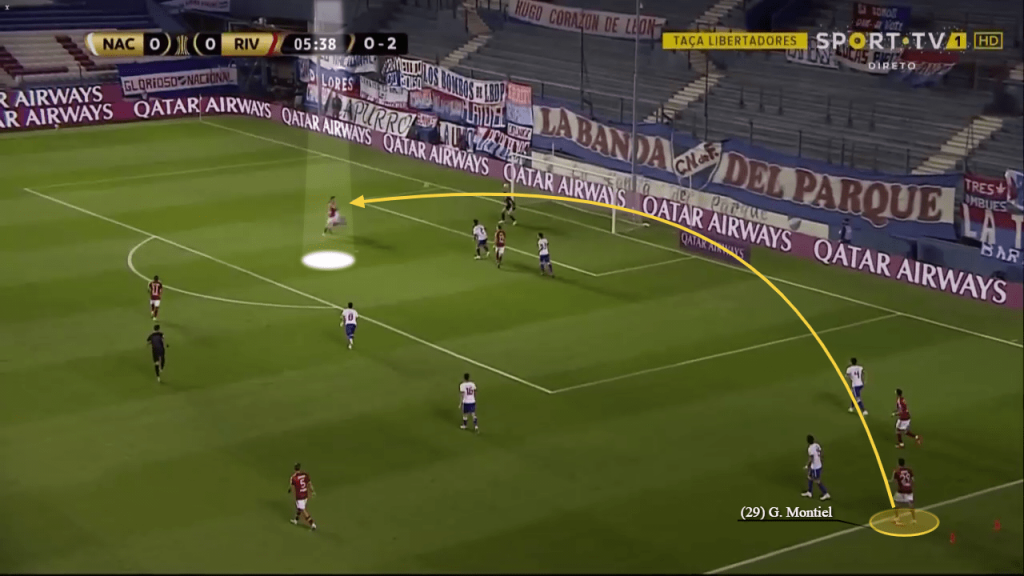 Although his polished distribution is a huge upside, there’s plenty to admire about his ball carrying too. At his best when marauding forward into vacant spaces, where he can use his good pace, energy and stamina, this helps add another dimension to attacks while destabilising opposition backlines by drawing out defenders.

Possessing tidy ball control and able to resist pressure, he’s shown how he can outfox opponents or gain separation with some neat feints, stop gos, drag backs, turns and smart changes of pace and direction.

Tying everything together with his movement, Montiel’s tactical acumen sees him position himself ideally to support build up and wide attacking patterns, for he situates himself to not only form triangles and diamonds to offer strong passing angles, but also so overloads can be achieved. 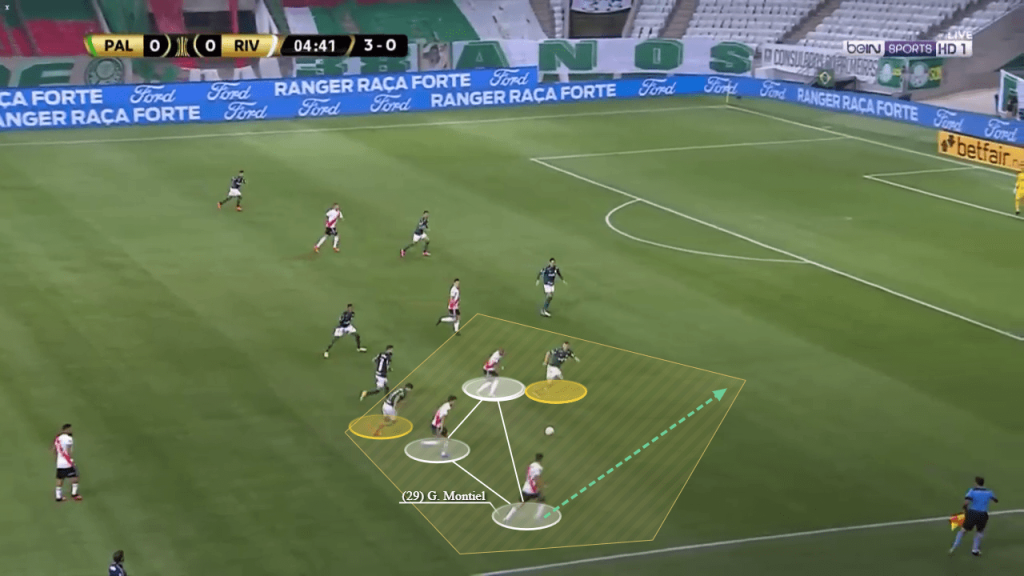 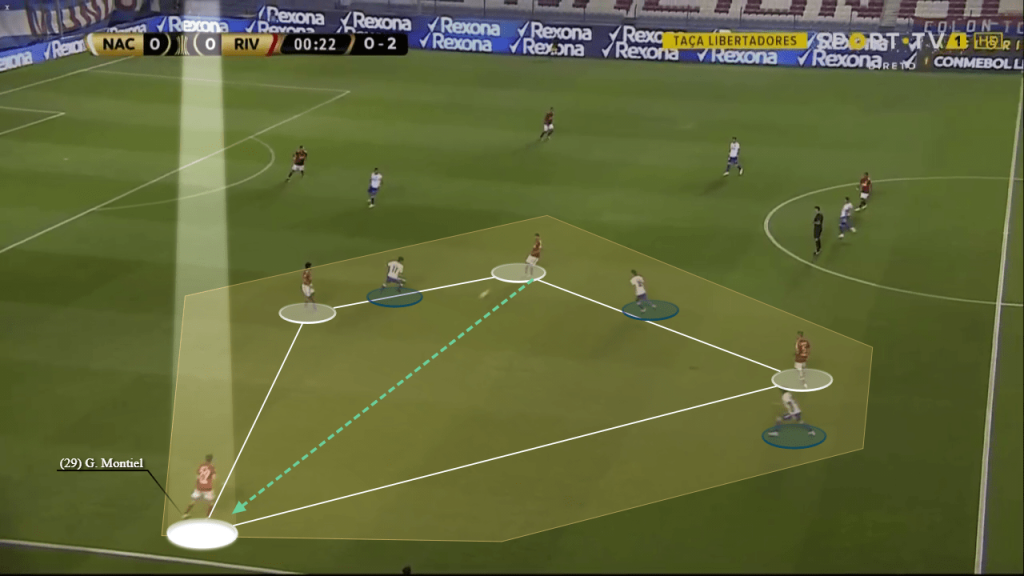 Couple this with his superbly timed forward runs, which bring vital width and depth to attacks, plus creates room inside for midfielders to tuck infield into dangerous central areas, and this amplifies his threat. His wicked blindside runs into the box, where he gains a dynamic advantage over his stationary opponent to increase his chances of latching onto passes, warrants mention too. As does his swift underlapping runs, which typically occur after a smooth rotation with his winger. 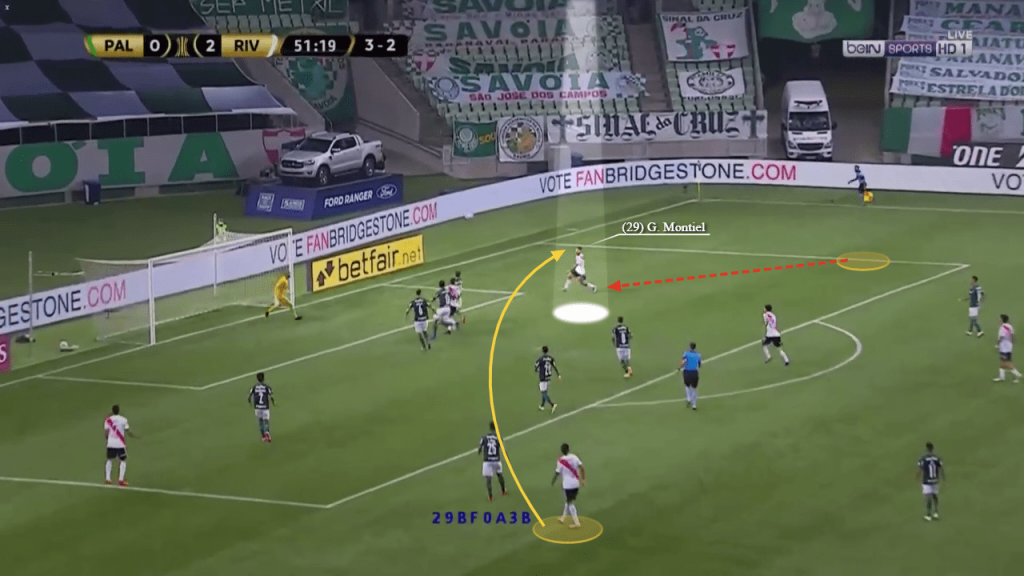 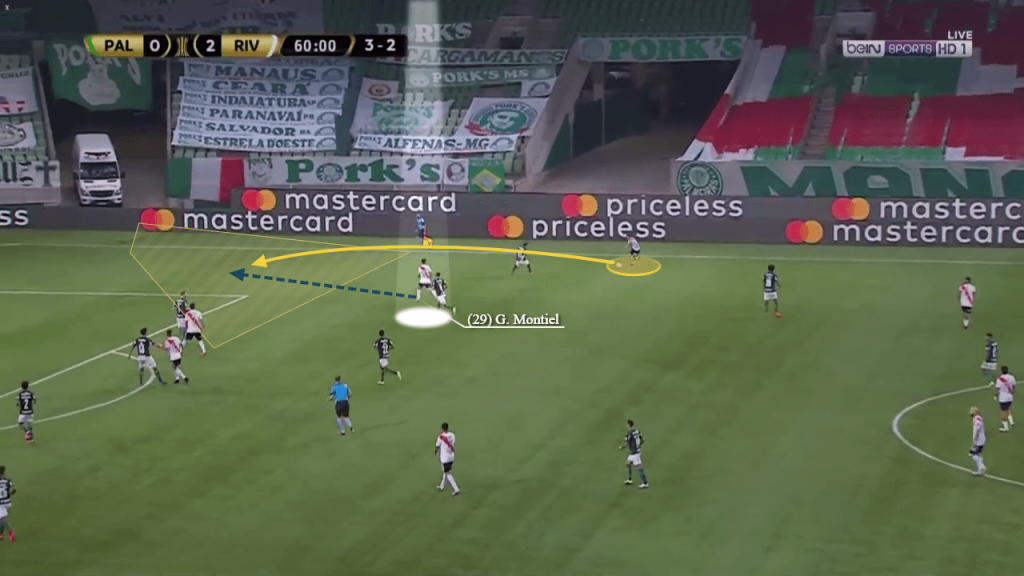 Meanwhile, on the defensive end, the 24-year-old blends intelligence, determination and conviction when undertaking his work. A coherent reader of the play, Montiel usually makes the right call when to step out to press, hold his position, drop back, shift across and keep in shape with his backline.

Indeed, his anticipation and concentration transfers over to when he applies his interventions, as he usually does so clinically to regain possession through a tackle or interception. Strong and never afraid to put his body on line, he parlays force and timing in the challenge, quickly deciding what action to take. The fact he wins over 70 percent of his duels depicts his success, nifty reaction times and what a tough adversary he is to face off with.

Tracking runners diligently and awake to their movement both towards and away from the ball, he looks to get touchtight to make life as difficult as possible for them to get the jump on him or receive cleanly once in possession.  Remaining attentive and alert, he identifies when the conditions are right to join in the high press or when to counterpress fiercely immediately after the ball is turned over. 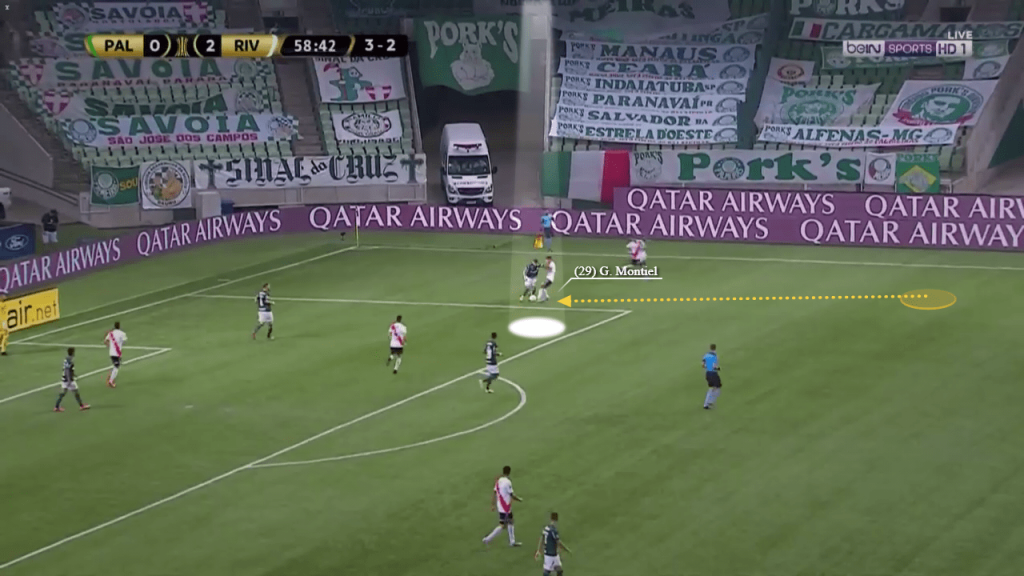 Despite not being a towering figure, the 175 cm defender competes manfully in aerial battles, where his capacity to pick up the ball’s flight rapidly and time his leaps have seen him do well in these confrontations. 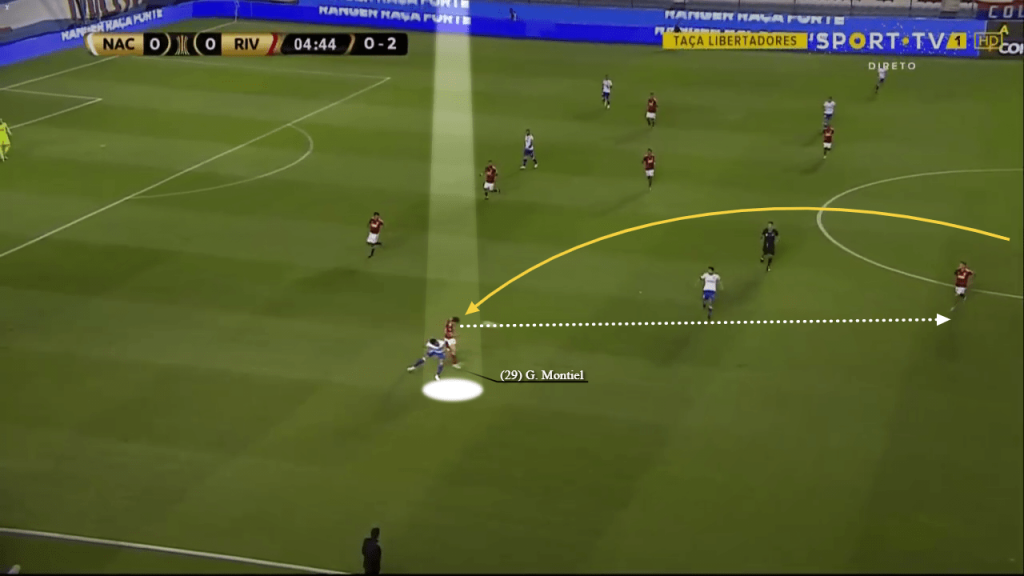 Described as a sponge by a member of River’s coaching staff due to his willingness to listen and eagerness to improve, he should be a joy to work with for any future coach.

Former River reserve coach Luigi Villalba gave a keen insight into his formidable mentality and work ethic, stating: “He has a rare approach for a young player. He’s very competitive, he does not want to lose anything. He plays as he trains, that is the advantage he has. He is not a player who has to mentally motivate himself to play, because just as he trains, he plays, he is like Maidana or Ponzio, which is not common for a player of his age.”

A player without any real weaknesses and who has the desire to persistently develop his game, he’ll be keen to add to his five titles, which includes a coveted Copa Libertadores, when he makes the switch to Europe.

With plenty of top level experience and entering the prime of his career, the capture of Montiel would unquestionably be a wonderful piece of business for many teams.

Now it’ll just be a case of waiting to see where he ends up.