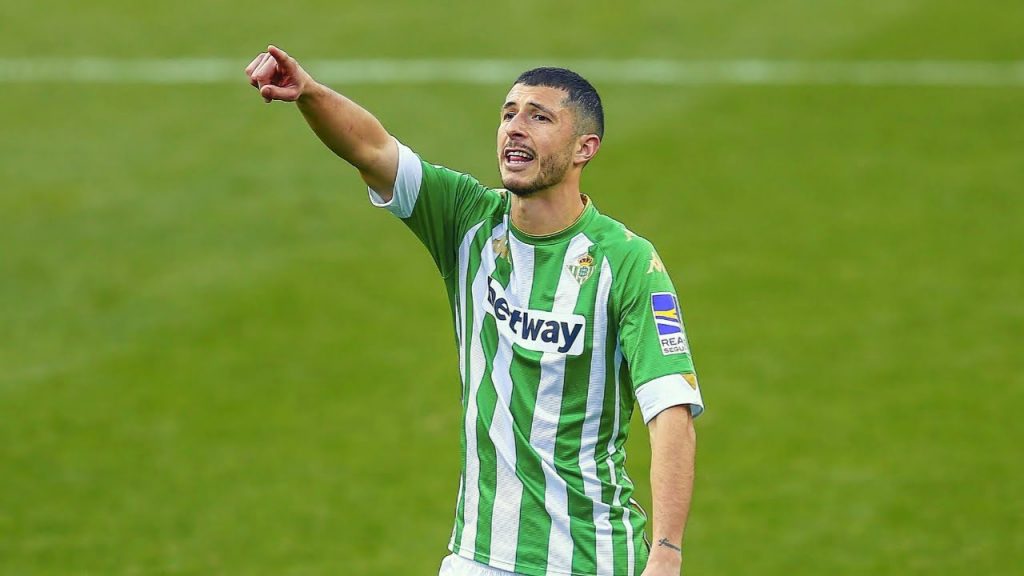 Having proved himself as one of the premier holding midfielders in La Liga this season, it’s been interesting to see Guido Rodriguez linked with a move to Arsenal in recent days.

An absolutely integral element within Manuel Pellegrini’s team, the Argentine international has featured 28 times for Betis this season, as he’s cemented his position as an indisputable starter. The fact he’s only missed three league matches, two due to injury and one because of suspension, serves as a testament to how highly he’s rated.

Currently sitting sixth in La Liga and playing some excellent football, the 26-year-old’s presence has been vital on both ends of the pitch for Los Beticos. Clearly relishing working with the experienced Pellegrini, Rodriguez’s recent comments illustrate this aptly. “Manuel (Pellegrini) is a very calm person, with a lot of knowledge. He has a clear idea of the game and he instilled it in us in training from the first day he arrived, telling us what he wanted us to do and setting clear guidelines. He’s simply transmitted his concepts. He can get the best out of each player and makes everyone committed. He is on top of all the details,” he gleamed.

Now in his second season, it’s been fantastic to see him thrive in La Liga after an initial period of adjustment getting used to the step up in class and speed of the game from Liga MX, where he played for Club America.

Growing with every passing week, the tactically astute and disciplined midfielder would certainly be a fine acquisition for Mikel Arteta’s Gunners.

Exceptional on the defensive end, his superb reading of the play, positional sense and judgement ensures he cuts out many an attack to regain possession for his team. Forever adjusting his position depending on the location of the ball and opponents, he knows when to shift across, drop back, hold his post, step forward, jump out to press or support a colleague.

Alert to opponents that venture into his designated area of operation, his constant head scans of his blindside ensure he’s awake to foes and can subsequently recalibrate his position to block passing lanes or mark any nearby adversaries.

On top of situating himself to block passing routes using his cover shadow and limiting his opponents, he’s also shown how well he responds to pressing triggers. Indeed, upon seeing an opponent receive back to goal, in an open body posture, plus if they’re about to inherit an inaccurate or underhit pass, he pounces smartly.

Showing good concentration and timing, the way he applies his tackles and interventions cleanly and authoritatively compounds issues for his targets. Extremely effective at winning back possession using his strength, long legs, powerful crouched posture and anticipation, this offers extra upside to his game. 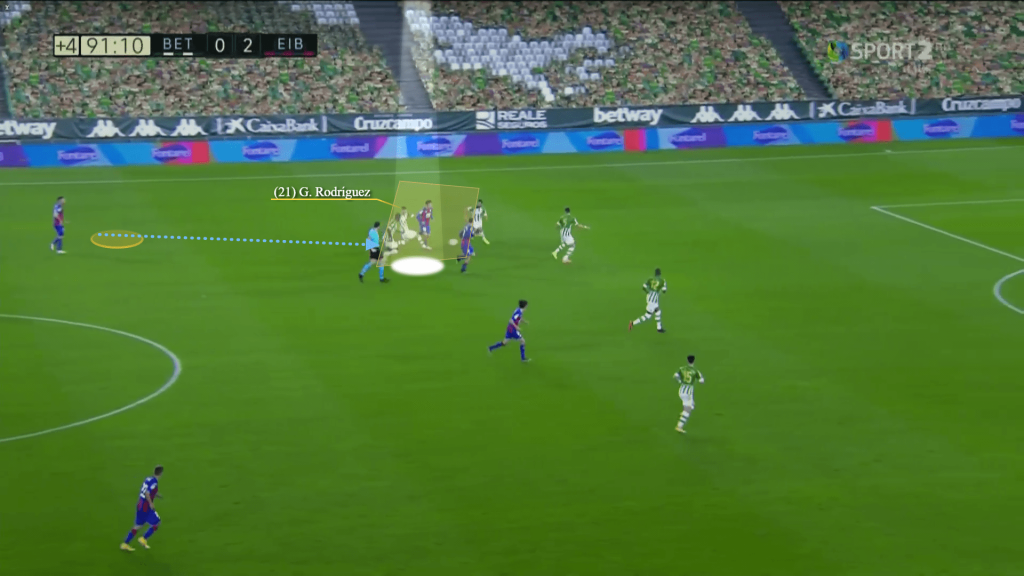 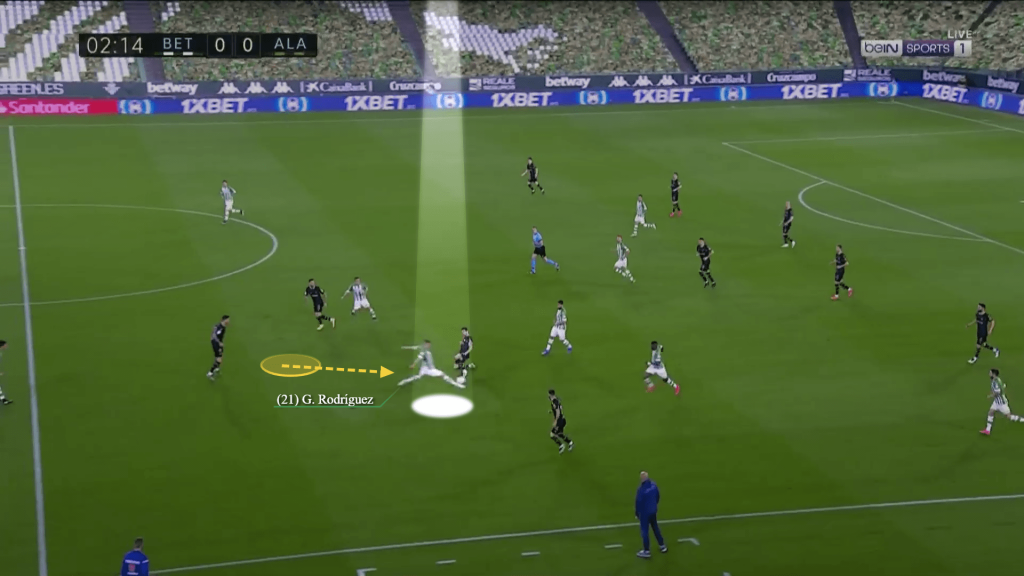 Always working hard and covering plenty of ground, Rodriguez can regularly be seen dropping deeper to support his backline to fill in for a teammate who’s been lured out of position, help deal with crosses, push across to slow down or stop counter attacks or take over any blown marking assignments. 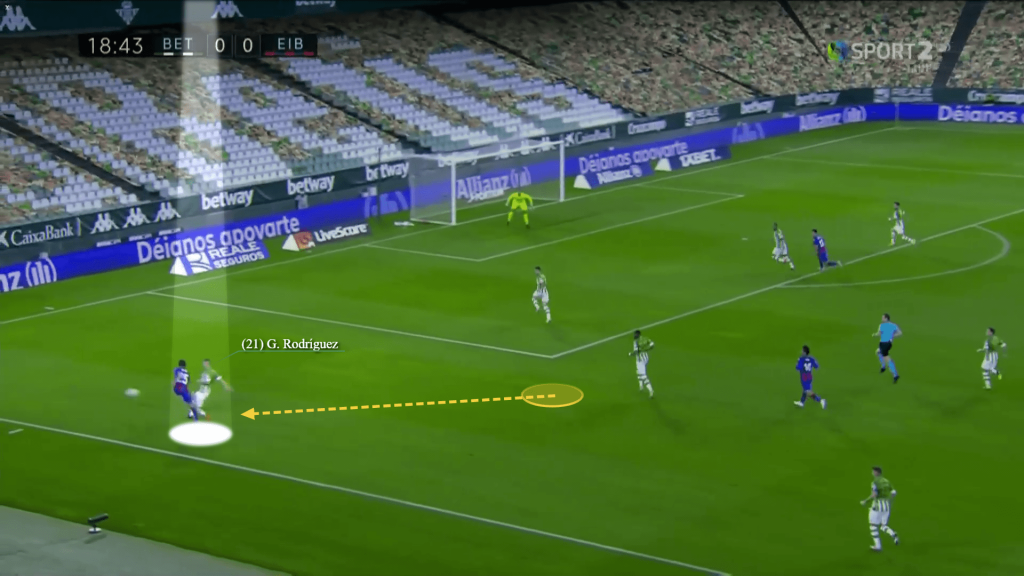 Offering fine protection to his defensive unit and regularly helping organise his team by communicating and gesturing with his colleagues, the way he’s shown immense leadership through his actions has been a big help for Betis.

Handling himself manfully in aerial confrontations, the imposing 185 cm midfielder picks up the ball’s flight quickly and remains balanced to win his fair share of headers from a variety of situations.

Meanwhile, on the offensive end, the former River Plate youngster has impacted proceedings positively too. To start with his movement, and he’s always offering himself as an outlet to help his team progress through the thirds.

Often dropping alongside the central defenders to form a back three, this gives Betis a solid foundation to build out from the back by forming an overload and luring out pressers to exploit spaces behind the first line of pressure. 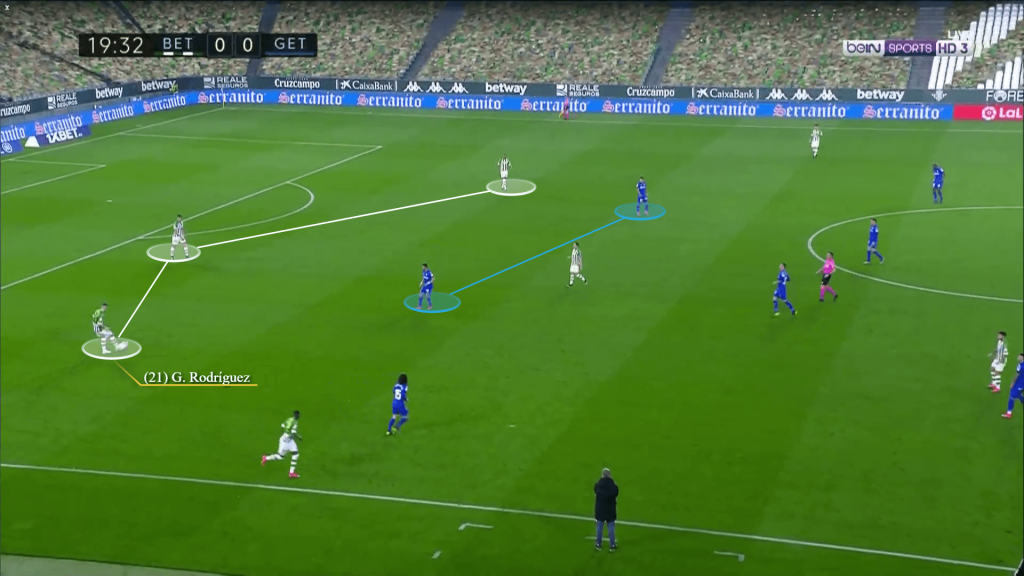 Furthermore, as his team moves up the field, he’ll constantly be on the move to support wide attacks to offer a central outlet to switch the angle of attacks and be connected to his colleagues to facilitate ball circulation. 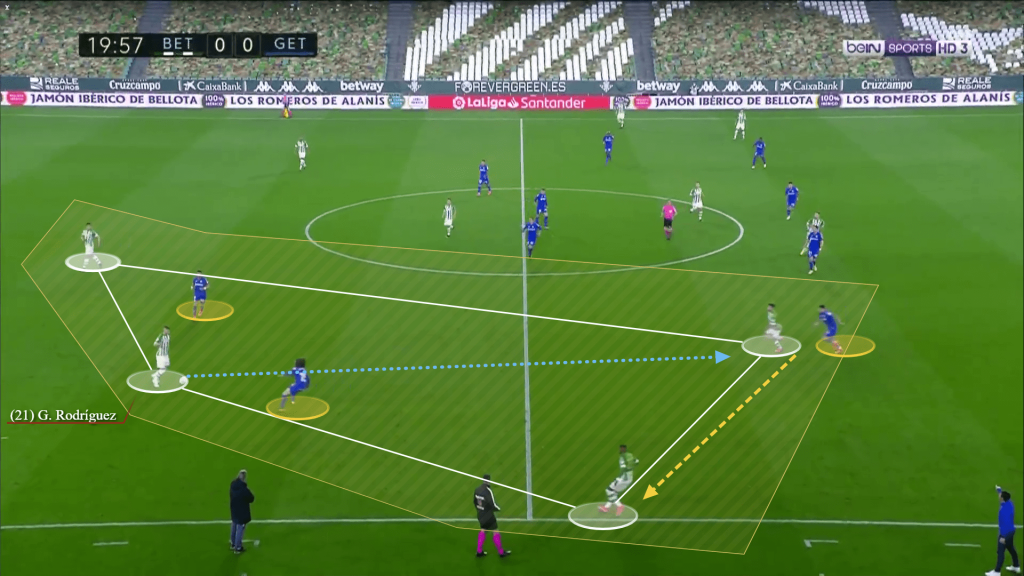 In terms of his passing, he’ll usually keep things ticking over smoothly, with him effectively getting the ball into Betis’ more technically gifted and creative players such as Nabil Fekir, Sergio Canales, Andres Guardado, Cristian Tello, Aitor Ruibal, Joaquin and Diego Lainez.

While he’s efficient at finding his teammates with simpler passes, he’s also shown he can strike more expansive passes. Be it via through balls to oblige runners in behind, breaking the lines to find attackers, combining smartly in close quarters and switching the play with raking diagonals, this has been an important string to his bow. 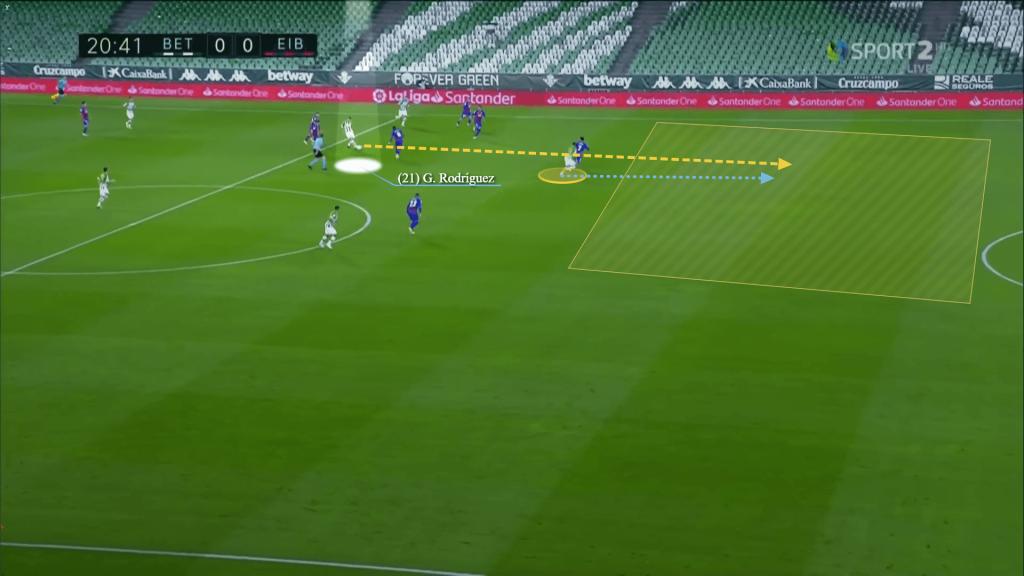 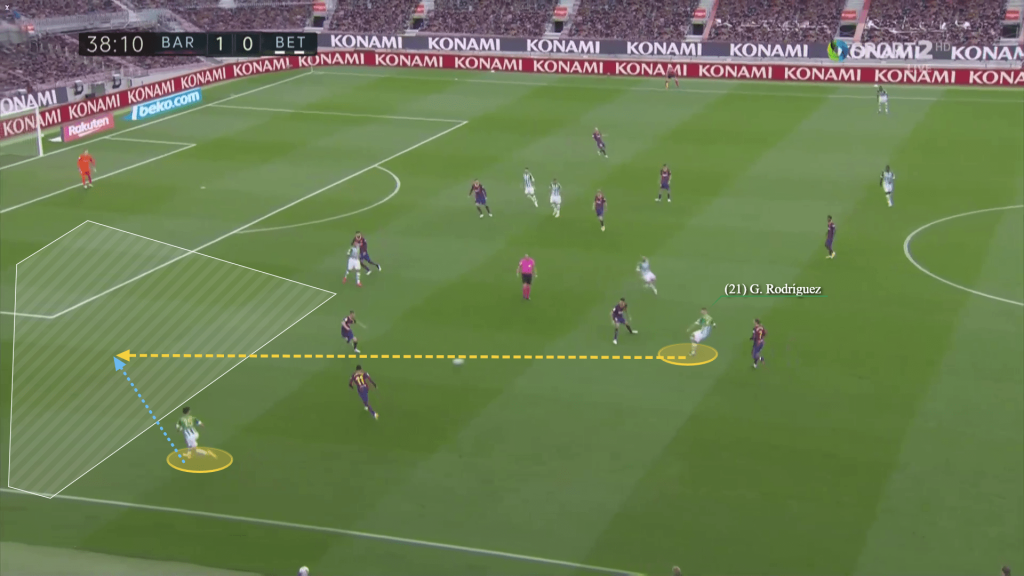 Composed and calm on the ball, the way he tailors his receiving body shape so he can either protect the ball, direct his first touch away from incoming pressure or turn immediately if he can has been positive. As a result he can withstand being harried successfully to weave out of danger to still execute his actions coherently.

His value has notably extended to offensive set pieces, where he not only serves as a quality target but also does a tidy job of blocking or screening opponents to grant teammates separation to attack deliveries. 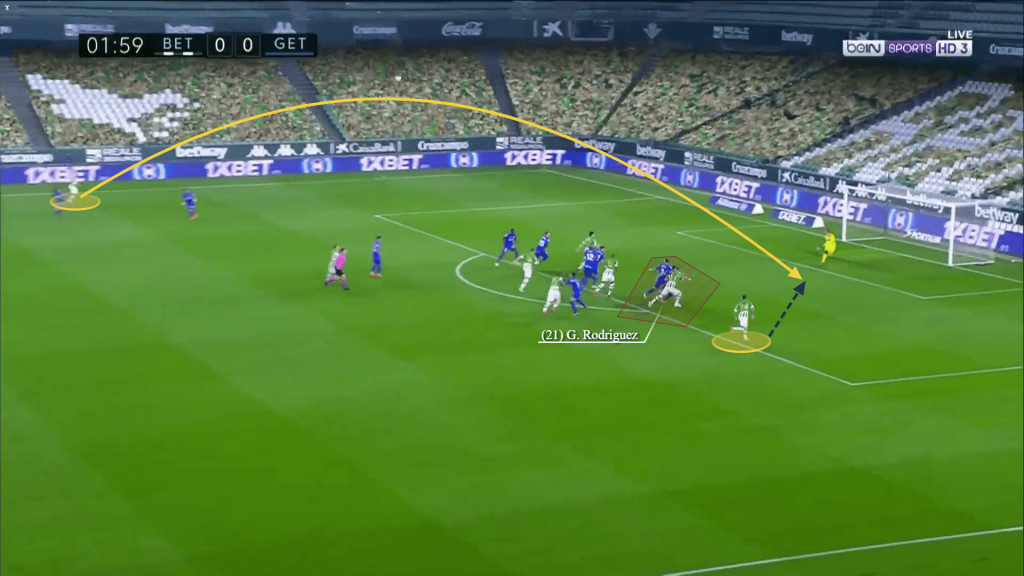 In the prime of his career, the reliable, well-travelled Argentine would definitely be a solid addition to the Gunners and many other top teams.

Although he’s not an eye-catching operator, he’s proven how masterfully he performs on both sides of the ball at Betis, adding vital balance, discipline and structural stability to Pellegrini’s team. A man who gets the fundamentals spot on and rarely commits errors, this type of defensively geared midfielder is worth their weight in gold despite often flying under the radar.

In the form of his life and set to be a man in demand come the summer, Rodriguez faces a tough decision regarding his future, as many will eagerly be awaiting his final choice.