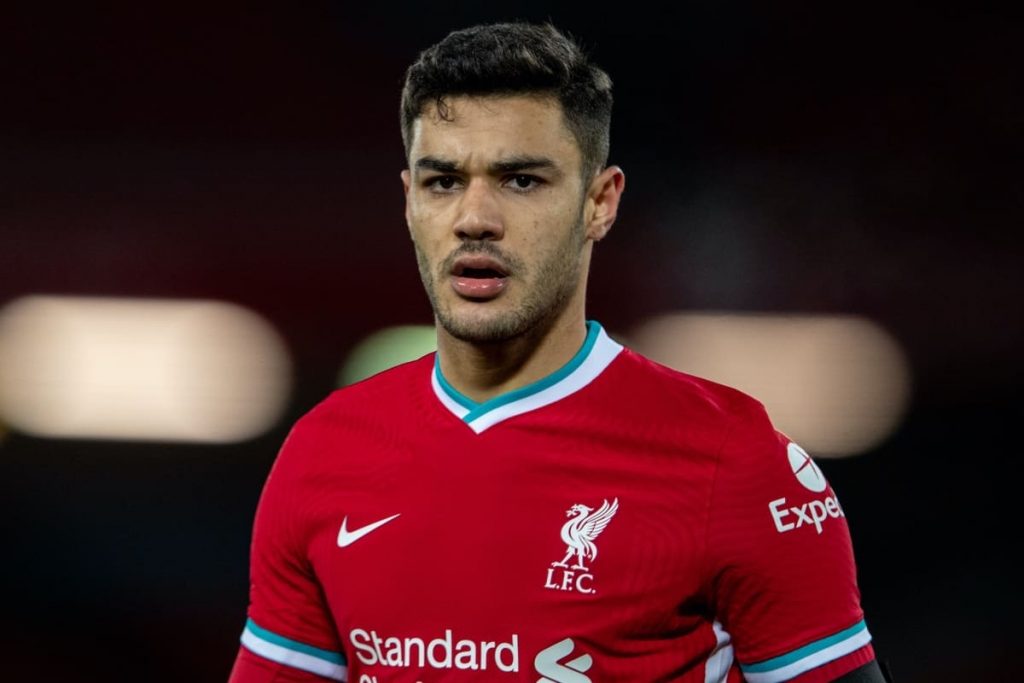 Despite enduring a difficult start to life at Liverpool, it’s been impressive to see Ozan Kabak adapt to life at Anfield and adjust to Jurgen Klopp’s system, as he’s gone from strength to strength in the last two months.

Joining in the January transfer window, which always presents a unique set of challenges, from Bundesliga cellar-dwellers Schalke 04, he was immediately thrown in at the deep end due to Liverpool’s defensive injury crisis.

After making an unconvincing start by struggling in the losses against Everton and Leicester City, the Turkish international has steadily improved. Gaining confidence with every passing week and continuing to familiarise himself with his colleagues and surroundings, Liverpool’s assistant manager, Pepijn Lijnders, was full of praise for the youngster, recently saying. “Ozan is a big talent, so much progression is still possible. He adapted fantastically inside our club from a context like Schalke and had an immediate impact with Liverpool FC.”

Helping Liverpool keep five clean sheets since his arrival, the talented 21-year-old’s defensive qualities have come to the fore of late.

Showing impressive maturity and discipline, his judgement and decision making have served him well. Persistently making excellent choices when to drop back or push up his defensive line, shift across, step out to press, cover for a teammate or pick up a marking assignment, this has been valuable. Particular highlights have come from his awareness that sees him smartly recognise when his man pushes up or goes up for a challenge, where he’ll cover the space left behind and monitor any opponents looking to exploit it. 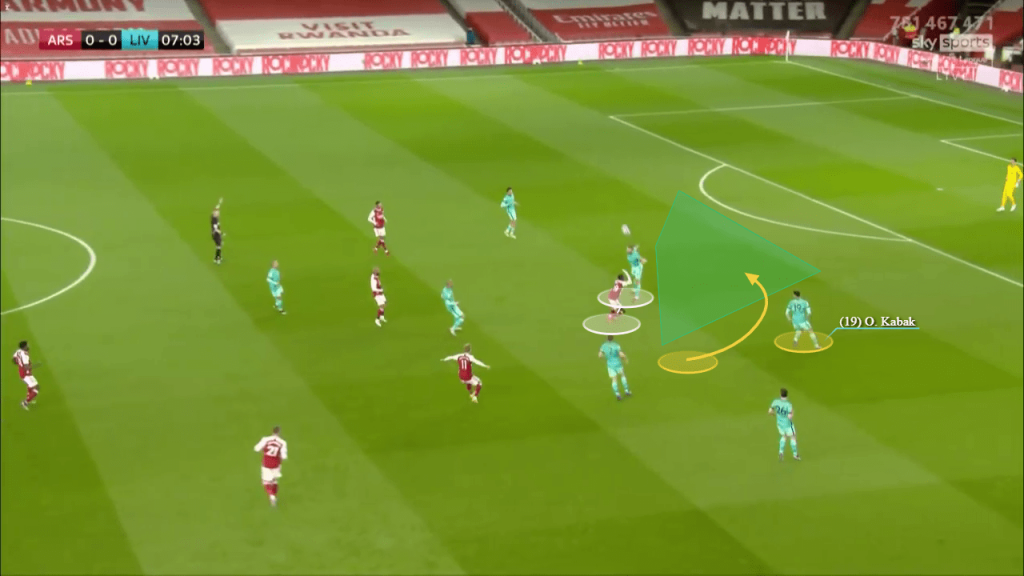 This aspect of his game is also evident when he’s covering the space behind the onrushing fullback, so his team are more structurally secure to handle counter attacks.

Showing sound concentration, Kabak’s been largely awake to his man both dropping deep with their back to goal, which is a cue for him to apply heavy pressure so they can’t easily turn and face or enjoy time on the ball, plus when they run in behind. Using his arms as blockers, decent speed and strength, he likes to get touchtight to his man to limit their effectiveness in either situation so they can’t enjoy much separation. 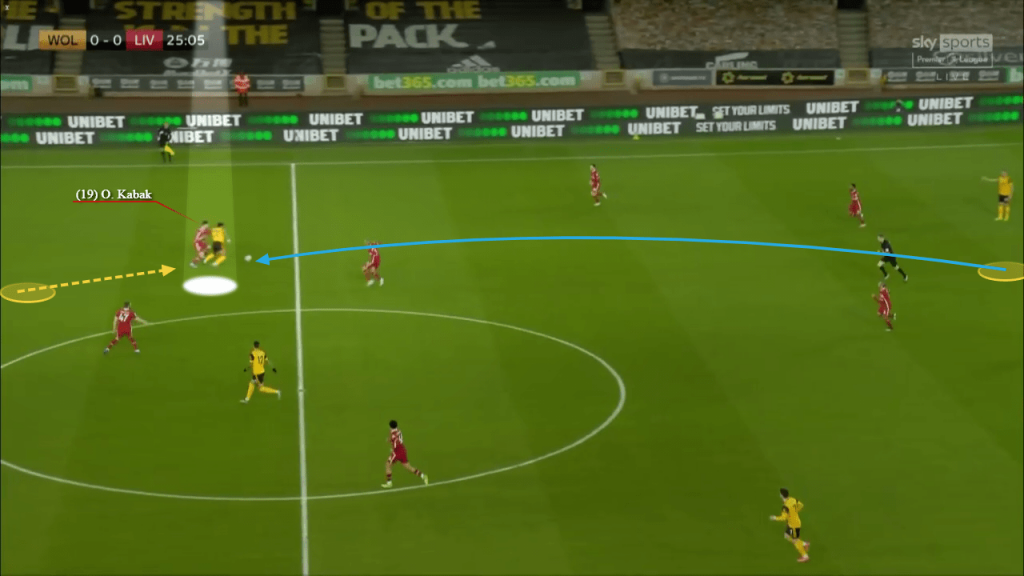 His reaction times to track his man has been notable too, for he’s quick to jump either way, which is helped by him usually being positioned in a powerful posture, ready to move. This has benefited him when snuffing out danger on counter attacks and picking up runners in the box.

Doing a good of scanning over his shoulder and to his sides, this means he’s awake to nearby runners, which has especially helped during crossing situations, so he can adjust his position accordingly. 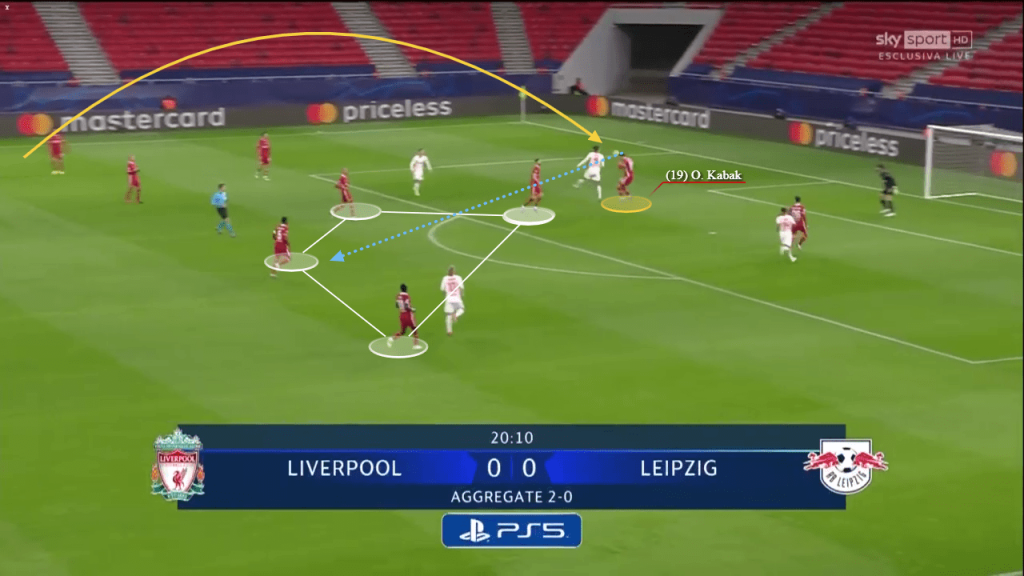 Upon parlaying this with his aerial prowess, towering 186 cm frame and ability to pick up the ball’s flight rapidly, and this sees him win a good chunk of his headers. His aptitude in heading duels also proves crucial for his team in winning second balls from goal kicks, thus enhancing Liverpool’s chances of regaining possession to attack again. 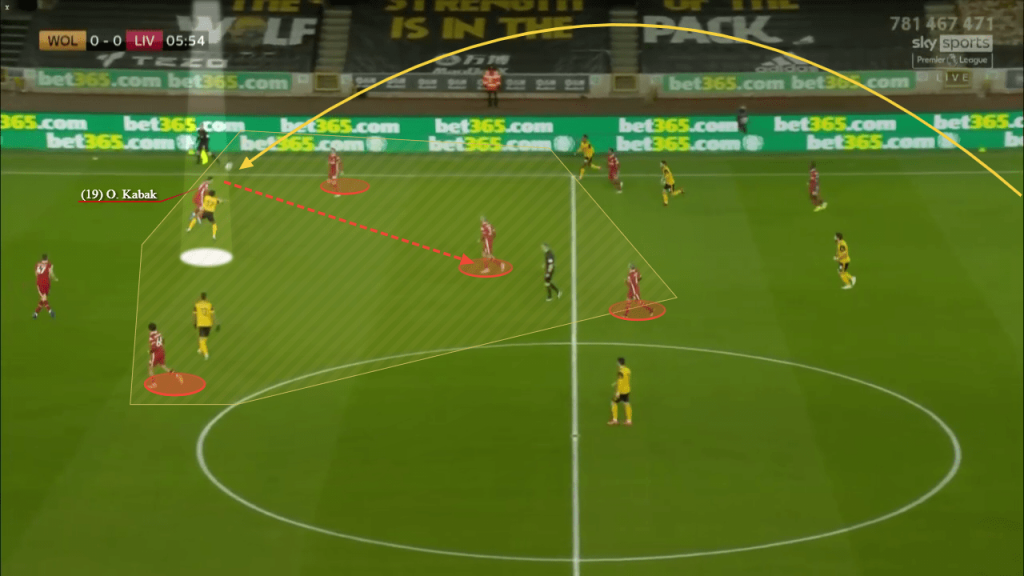 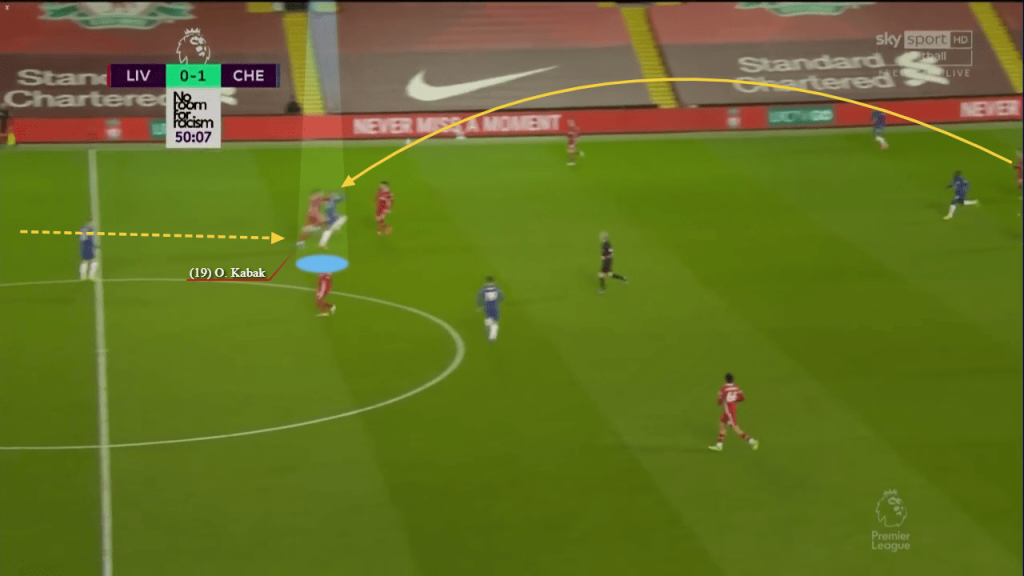 Meanwhile, when it’s come to his offensive contribution, Kabak has proved his worth in this phase as well.

So calm and composed on the ball, he’s been efficient at helping Liverpool build out from the back, with him able to withstand pressure and draw out markers before executing his passes cleanly. Able to use both feet, his capacity to hit a wide range of passes has been key in him recycling the ball, switching the play, hitting penetrative line breaking passes and working in close confines. It’s been good to see how he cleverly uses his eyes and body shape to disguise passes before changing his mind late to take advantage of a free man due to a defender shifting. 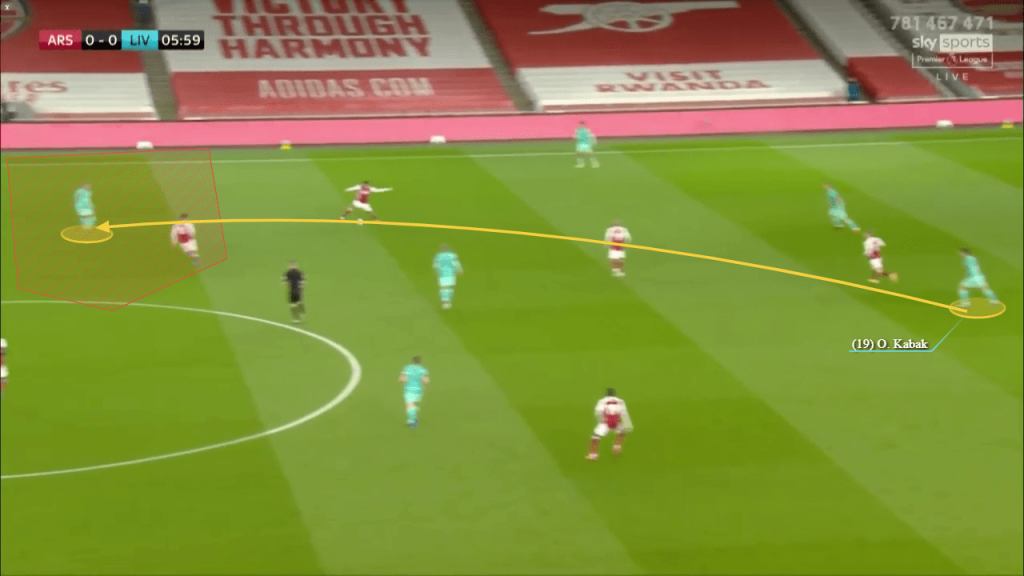 Patient and unfazed by foes harrying him, if the progressive pass isn’t on, he has no issues playing safer sideways and backwards passes while waiting for a weakness in the opposite block to arise.

Adept at dribbling the ball into vacant spaces ahead, if he sees an opening, he’ll charge into it, with the idea being to gain territory before provoking a pressing action to then find a free man or open passing lanes.

His knowledge of where to position himself to form overloads and stretch the opposition first line of pressure has been a highlight. Typically splitting wide whether Liverpool are building in a two or a three (when a midfield will drop deeper), he’s been comfortable in either method. 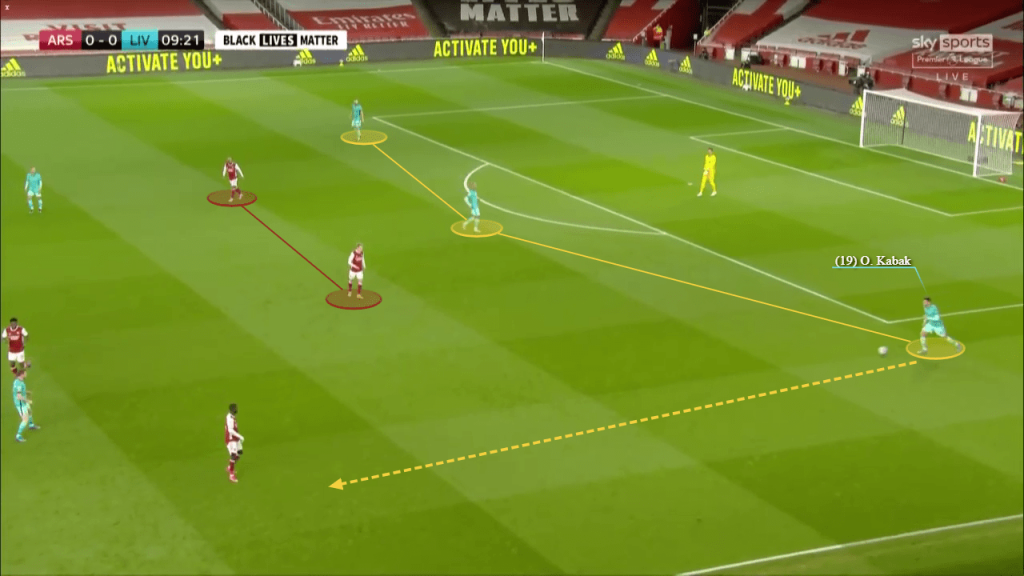 Seeing as the Reds regularly rotate and switch things up frequently with their build-up shape, in order to destabilise their opposition, he’s done a good job of assimilating himself with these tactical tweaks so he’s on the same page.

In light of his superb form both domestically and in Europe, the man who joined on an initial loan with an option to buy for £18 million, is doing his chances of joining permanently no harm at all.

At just 21-years-old and with so much room for development in his game, bringing him in full time definitely makes sense considering he’s already had that crucial integration time to settle in and how well he’s playing.

Only time will tell what happens, but if he can keep up his high level, Liverpool will be left with no other option but to sign the talented Kabak, who’s demonstrating he’s got what it takes to play and thrive within Klopp’s exceptional team.