Jack Marriott proving his worth at Derby 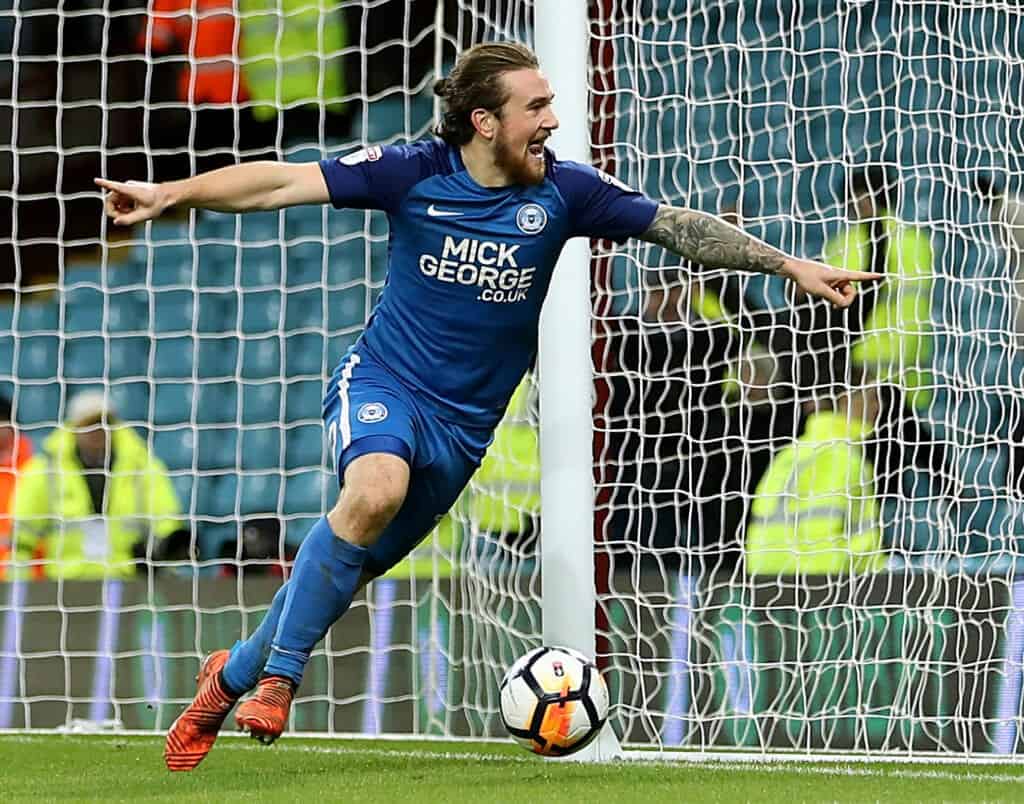 Jack Marriott made quite the impact in his first season at Derby County, with the former Peterborough United star stamping his mark with an impressive 13 goals in all competitions.

Although he wasn’t always Frank Lampard’s first choice striker, he still started 24 matches and appeared as a substitute on a further 19 occasions, on his way to proving he was up to the task at the Championship level.

Scoring some massive goals throughout the campaign, the diminutive 24-year-old found the back of the net in colossal FA Cup ties vs. Manchester United, Southampton and Chelsea, plus scored in league contests with Norwich City, West Bromwich Albion, Birmingham City and Sheffield Wednesday. Arguably, however, his most memorable strikes arrived against Leeds United in their play-off, where his sensational double propelled Derby into the final vs. Aston Villa, a match which he also scored in but one that Derby ultimately lost. 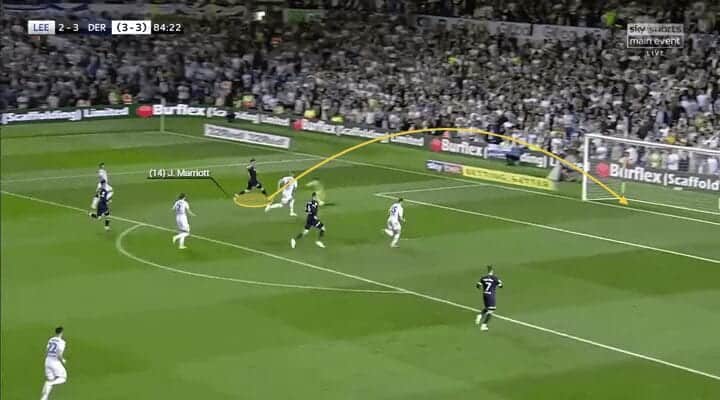 Coming off the bench in that clash with Villa, he gave the Rams another dimension going forward in their quest to come back, with many criticising Lampard for not giving him the nod over Mason Bennett. While pressing Marriott’s efforts after the match, Lampard staunchly defended his decision not to start him. “What you saw when Jack came on is what I expected although I didn’t want us to be 2-0 down, but I expected his freshness to really hurt the Aston Villa defenders in the second half of the game, and I think it did,” he explained to Derbyshire Live.

“For Jack, I think this season has been great for him to see what you need when you step up the levels. I am not saying he doesn’t give everything, I am talking physical ability to do that. I think he can go away this summer and look back on a good season and see all the signs really clearly about the player he can become because he can get even better.”

Whether starting or stamping his mark off the bench, there’s certainly been a lot to like about the pocket rocket’s play, for he’s combined power, pace, intelligence, hard work and instinct effectively.

A real handful to contain due to his physicality and athleticism, the strong and pacey forward persistently asks questions of his opposition. A nightmare to play against due to his sheer intensity, he battles manfully in every duel he competes in.

Boasting a low centre of gravity and incredible lower and upper body strength, he’s a difficult customer to outmuscle in battles of strength too. In addition, the way he fights for aerial duels despite standing only 173 cm tall illustrates his tenacity and never say die attitude.

A really shrewd identifier of gaps within the opposition backline, he targets and directs his runs superbly to ensure he has separation and can give himself every opportunity to latch onto through balls in behind the defence. Moreover, the way he exploits the blindside of his markers, in order to gain a dynamic advantage over his more awkwardly oriented marker is another aspect that gives him an edge. 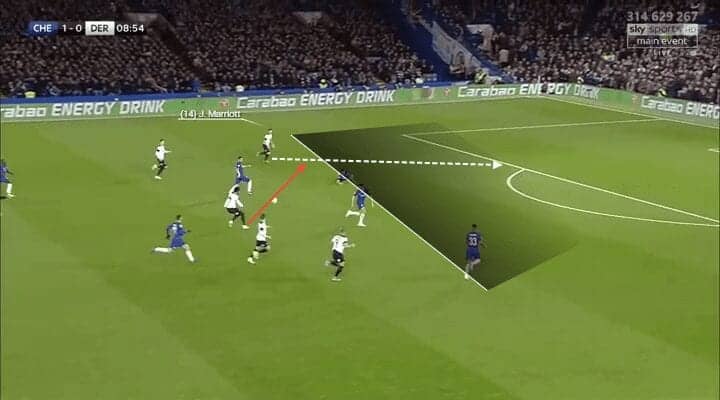 A real fox in the box, who knows precisely where to position himself and is a master at holding his runs or attacking the vacant space, he frequently threatens from these golden areas. Instinctive, an expert at anticipating the ball’s flight and where any rebounds may fall, his work inside the box is a real highlight. 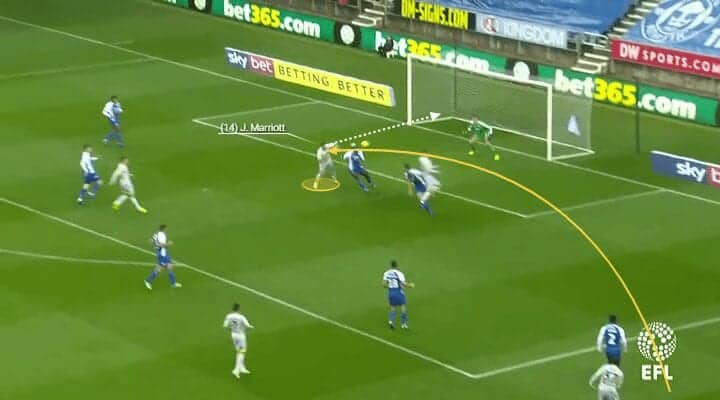 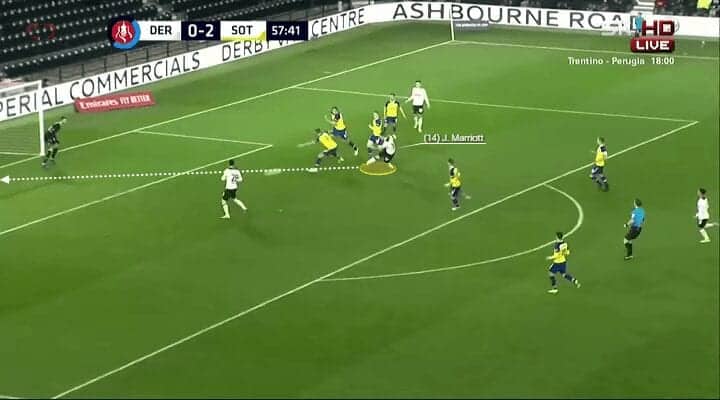 A determined dribbler who’s shown he can beat his man in 1v1 situations using a nice blend of feints, shimmies and slick changes of pace and direction, the former Luton Town hitman relishes the chance to drive at adversaries to either beat them or provoke a pressing action to free up a colleague.

Although not his finest quality, he’s also capable at dropping deep to link play, with him playing some neat one and two touch passes to knit moves together to progress the attack. Holding up the ball competently and efficient at getting the ball to the feet of Derby’s better passers, Marriott’s distribution has served his team well. 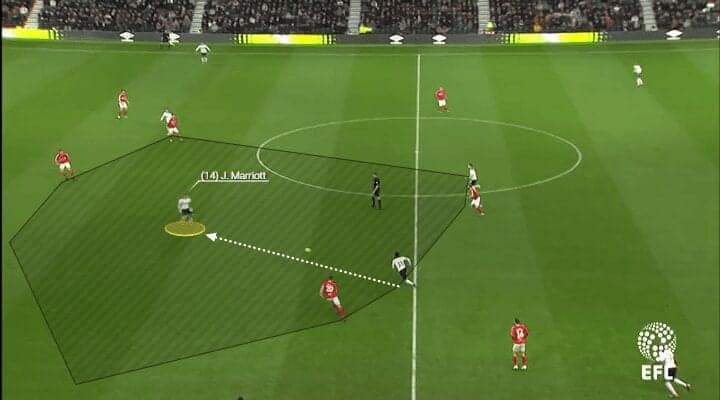 Considering he was once a non league player, his remarkable upward trajectory to get to the Championship is a testament to his mental fortitude, perseverance and unwavering desire to make it.

Still only 24, and with plenty of room for improvement in his game, Derby’s fearless centre forward will be looking to build on his successful campaign in one of Europe’s toughest leagues to further establish his reputation as one of the more dangerous marksmen in the division.