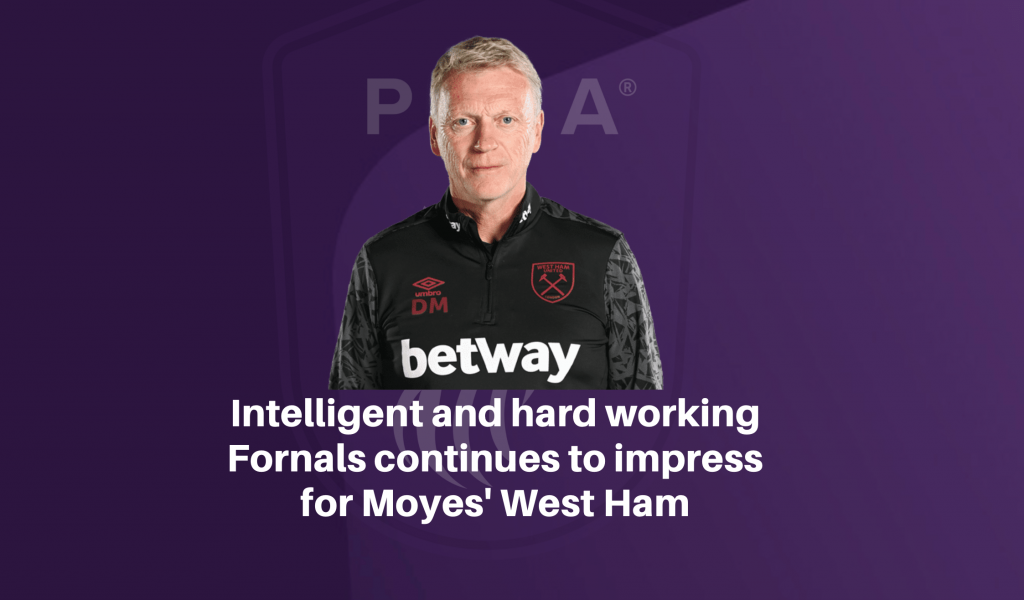 The radical improvement of West Ham has been one of the surprises of the Premier League season, with them going from relegation candidates to contenders for the Champions League qualification places.

With David Moyes working wonders with his squad to get the best out of them, he deserves immense credit for transforming the Hammers into a tight knit, hard to beat collective unit.

Pablo Fornals has certainly been a key beneficiary, for the Spaniard, who signed for a sizeable £24 million from Villarreal back in 2019, has begun to truly stamp his mark on the Premier League after initially finding things difficult in the hugely demanding league. “When he came here I was finding myself with Pellegrini and trying to play good games,” Fornals told the Guardian.

“When David Moyes came I just tried to show him I was ready to give the team my experience, my youth, my energy. I want to play and for me it doesn’t matter who is the coach. It’s him who chooses between all of us and it’s not easy competing with these really good teammates, so I always try to give 2,000%.”

“We have to enjoy these moments as a fan, a player, as a coach, as a West Ham fan. Enjoy the moment, enjoy the process. These things are giving us a little bit more – why we never stop running in minute 90, why we believe we can play against everyone. It is a good way to live. I’m really happy here, not just on the pitch but outside the pitch as well with my teammates, the fans and the staff.”

Now settled in and feeling happy with the Irons, his contribution has been valuable towards West Ham’s incredible rise up the table.

Such an asset for Moyes due to his versatility, which sees him capable of playing as a winger, a central midfielder or an attacking midfielder, this gives his manager plenty of tactical flexibility as to how best to deploy him.

Tireless, relentless and full of intensity, his defensive efforts have helped set the tone for his colleagues to follow and ensured his team win back possession in advantageous areas regularly. Hard running and fierce in the challenge, the Spaniard always puts in a wholehearted shift, with his pressing especially notable.

Not only does he reach opponents rapidly to give them minimal time to make coherent decisions, but he angles his harrying to screen passing lanes behind him, thus further compounding issues for his enemies. As a result, the ball holder is often forced into an error or a low percentage long ball, which enhances his team’s chances of recovering possession.

Positionally sound and always adjusting his position when the Hammers are defending deeper, he helps his team remain compact and ushers opponents away from dangerous central areas. Full of energy, his running power and awareness means he’s always on hand to track back and support his defence by covering runners or filling in when a colleague is drawn out of position.

Fornals accompanies the aforementioned with his offensive efforts, where his technical class, intelligent movement and nous has been a big asset for his team.

Beginning with his movement, and Fornals is a master at reading the play and being awake to his surroundings through scanning, which allows him to expertly exploit vacant spaces no matter what position he’s in.

Very adept at finding room between the lines and in the half spaces, he’s offered a great link to connect midfield and attack while evading opponents. Due to his head checks, this sees him know whether he can turn immediately and drive forward, protect the ball, spin to either side or play a quick lay off. 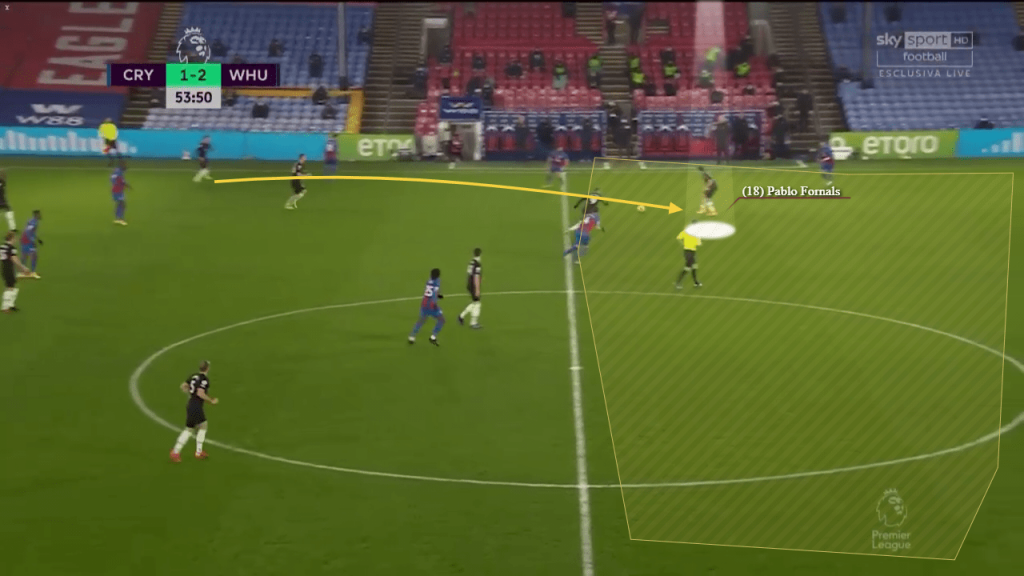 It’s been positive to see him help form overloads in wide areas, where he joins a combination of a dropping forward, nearby wingback and closeby central midfielder to form triangles and diamonds to help his team progress. The graphics below offer a fine example of the above, where he serves as the free man twice as the Hammers break through Crystal Palace using overloads. 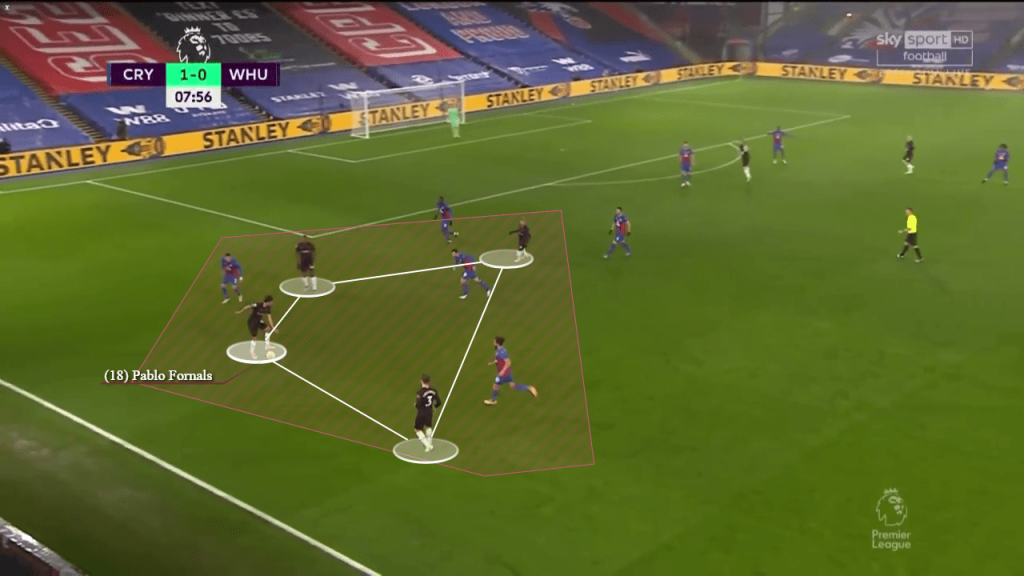 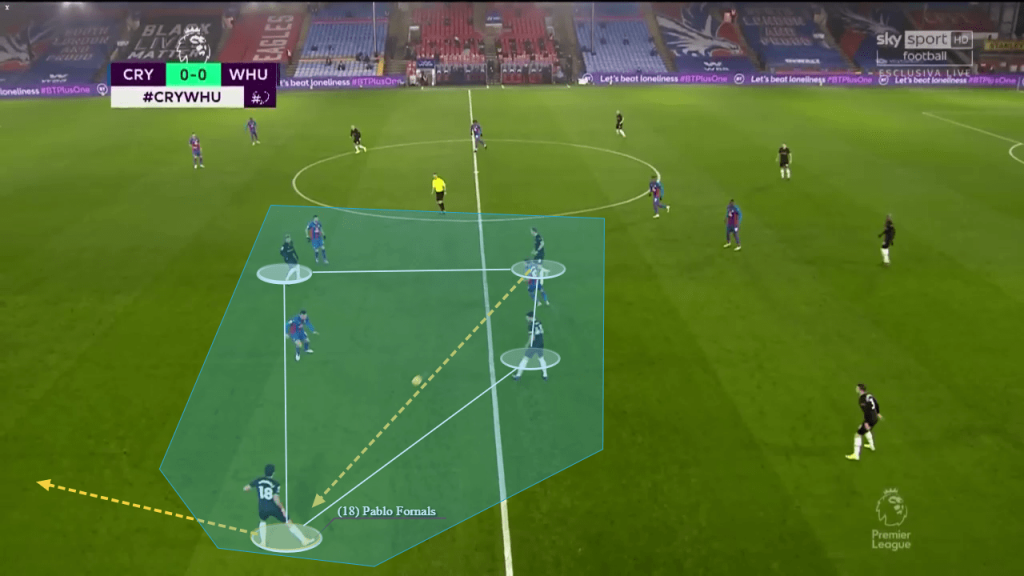 Forever buzzing across the final, his threat extends to his damaging runs in behind. Astute at picking his moments to pounce, once he recognises a colleague with their head up and the ball on their preferred foot, he’ll get on his bike. How smartly he times his runs is another upside, for he notices if a defender is drawn out, preoccupied or ball watching to target gaps in between defenders. Stretching and unbalancing adversaries, he’s attacked vacant spaces efficiently to offer a threat inside the box and in and around the final third. The way he’s rotated slickly with his teammates, performed opposite movements and been ideally positioned to latch onto headed knock downs and flick ons, has illustrated his good understanding with his comrades and quality reading of the play. 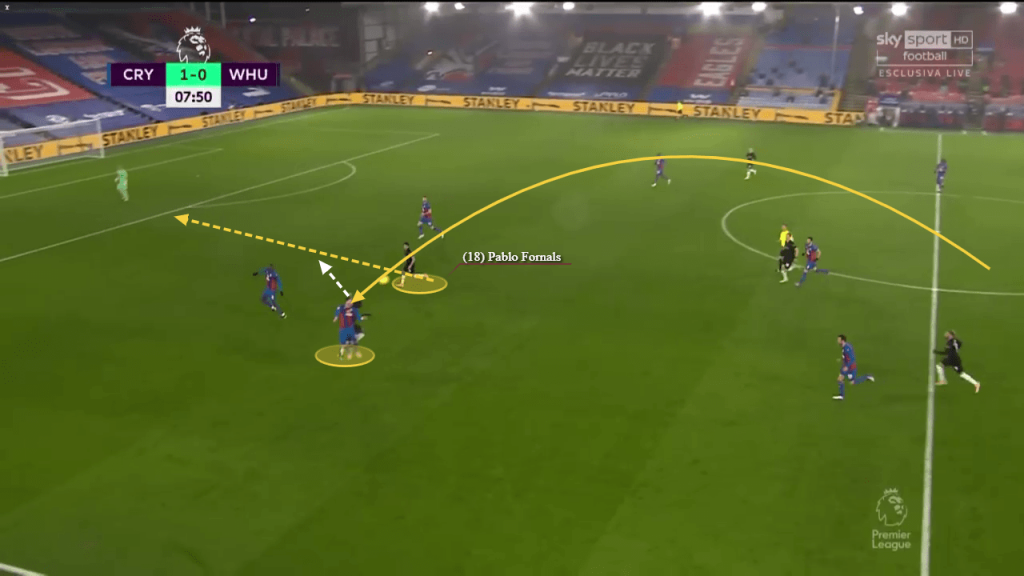 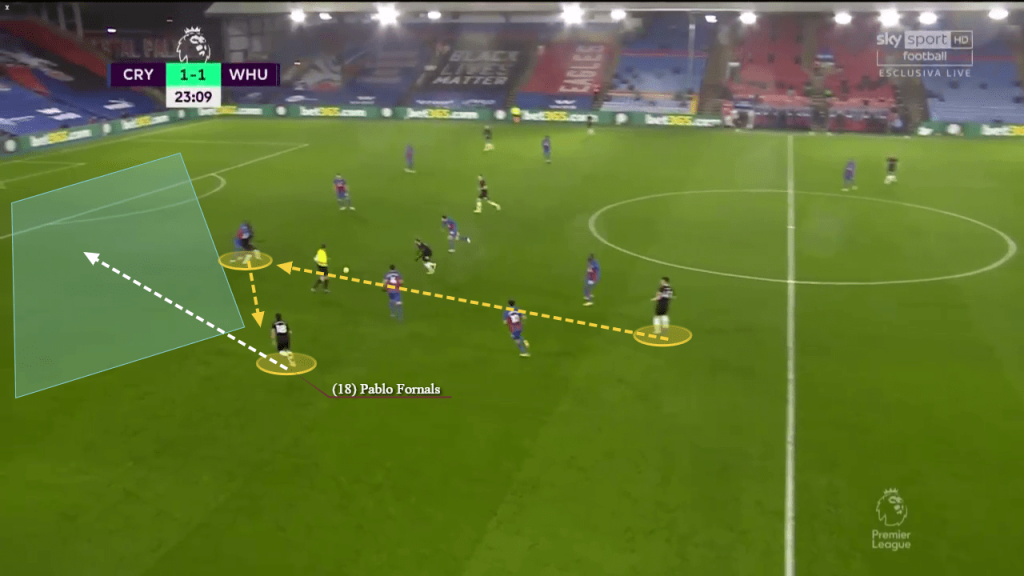 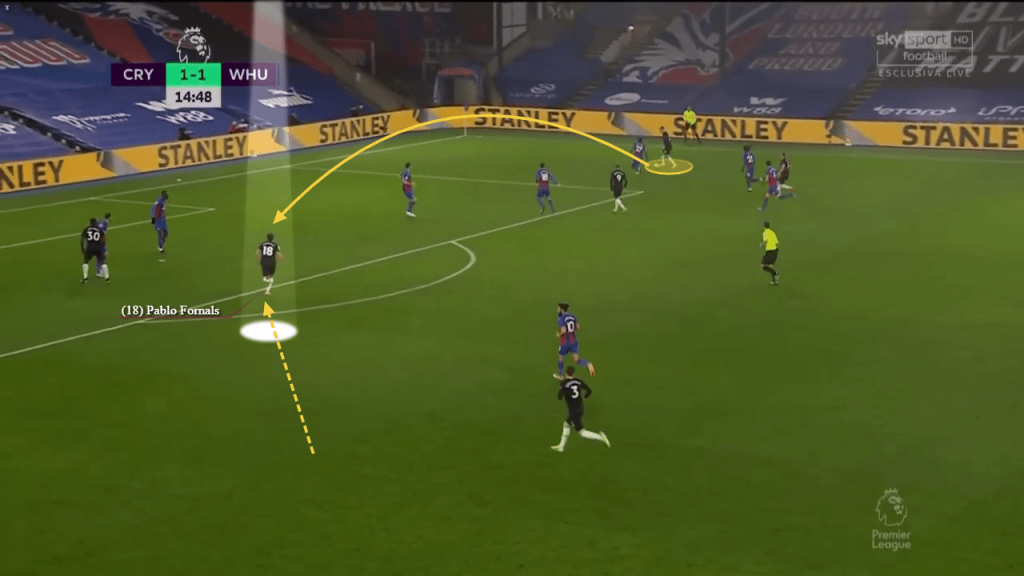 On a technical level, Fornals has proved his class, with this nifty ball control and first touch affording him a sound foundation to shine. Full of craft and guile on the dribble, he uses an array of moves, including feints, shimmies, body swerves and changes of pace and direction to unbalance or beat his foes. Able to draw defenders and so comfortable under pressure, this has often seen him lure out opponents before having the presence of mind to find a free man.

Two footed and boasting sound vision, his passing is at a high level. Sharp at combining intricately with crisp one and two touch passes in close quarters, feeding his forwards with passes to feet or via through balls in behind, switching the play, hitting accurate crosses and cutbacks and recirculating possession while waiting for a progressive option, his repertoire has been an asset.

Creative and a line breaker, his passing and ball carrying have been handy for the Hammers both in transition and in more controlled possession situations. 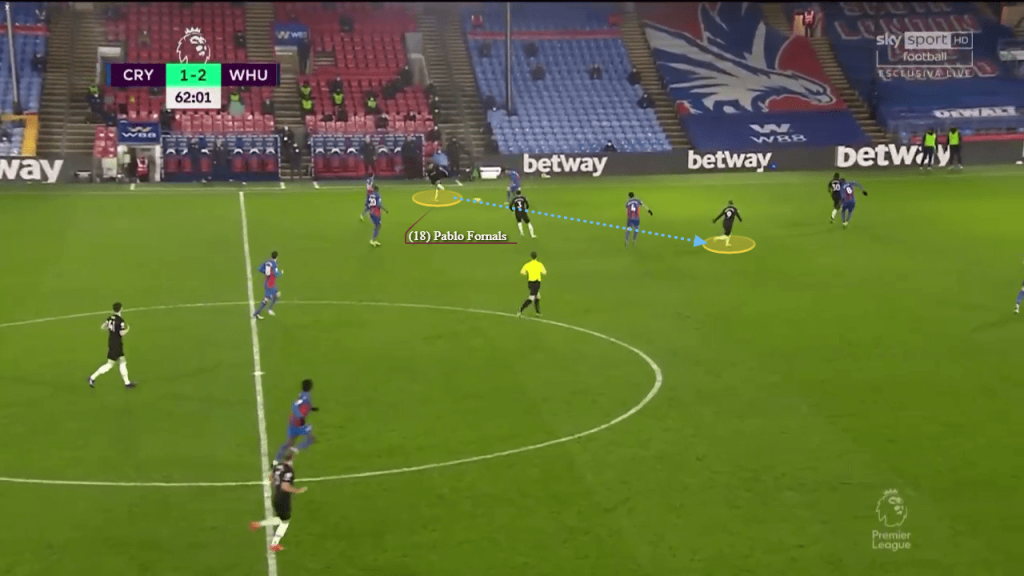 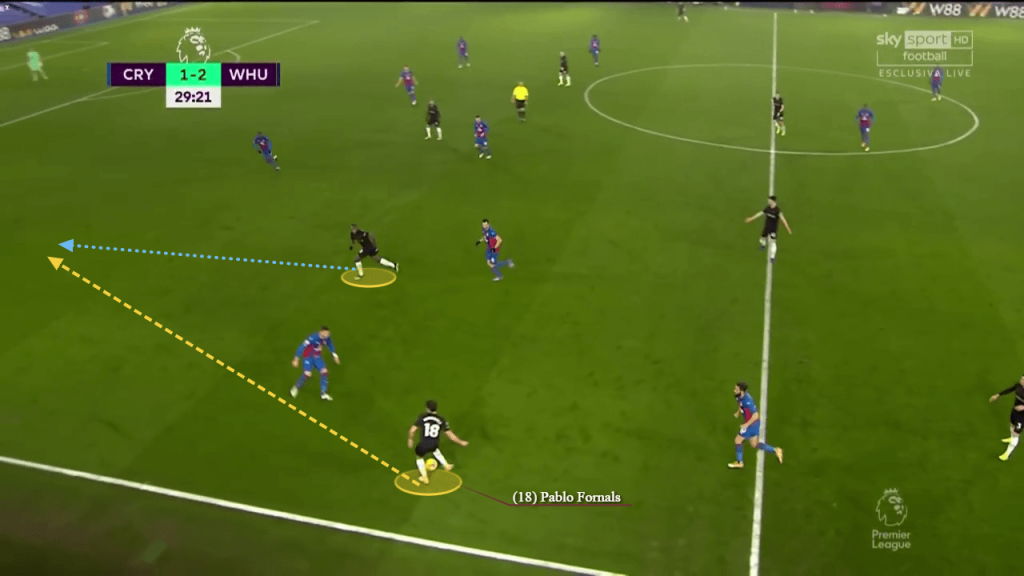 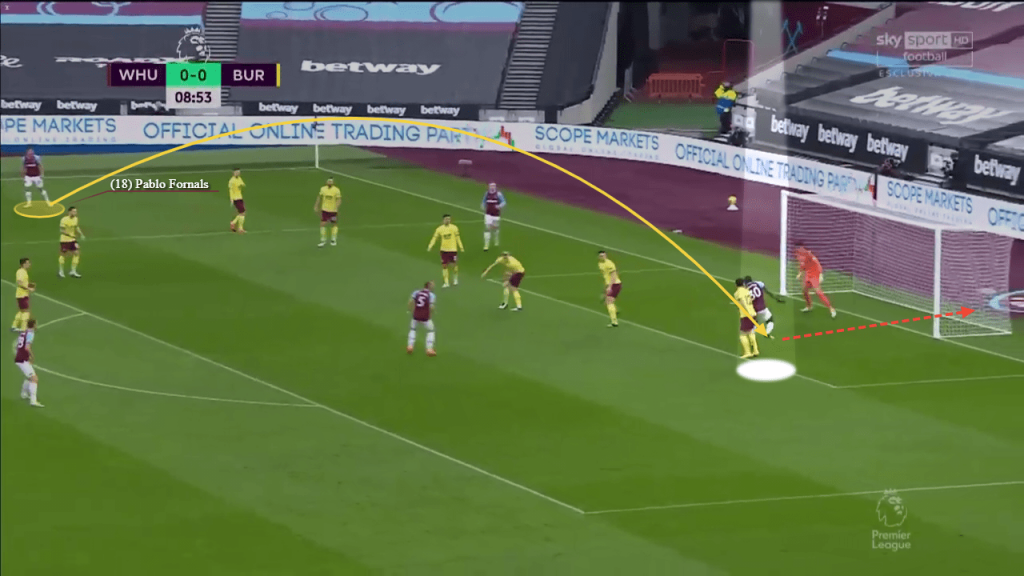 Improving all the time, he’s become a reliable and consistent performer for the high flying Hammers. Although he’ll want to up his goal contributions, for he’s only got three goals and three assists in 28 Premier League appearances, his manager is clearly happy with him. “Pablo has done really well,” Moyes explained. “He’s a really likeable boy and works really hard for the team.

“We’re always demanding more from him because we want assists and goals for him and he’s been doing that. His energy and enthusiasm is incredible.”

Offering so much on both sides of the ball, it’s been fantastic to see him put his earlier struggles at West Ham behind him, as Fornals has now firmly established himself as an accomplished Premier League player.