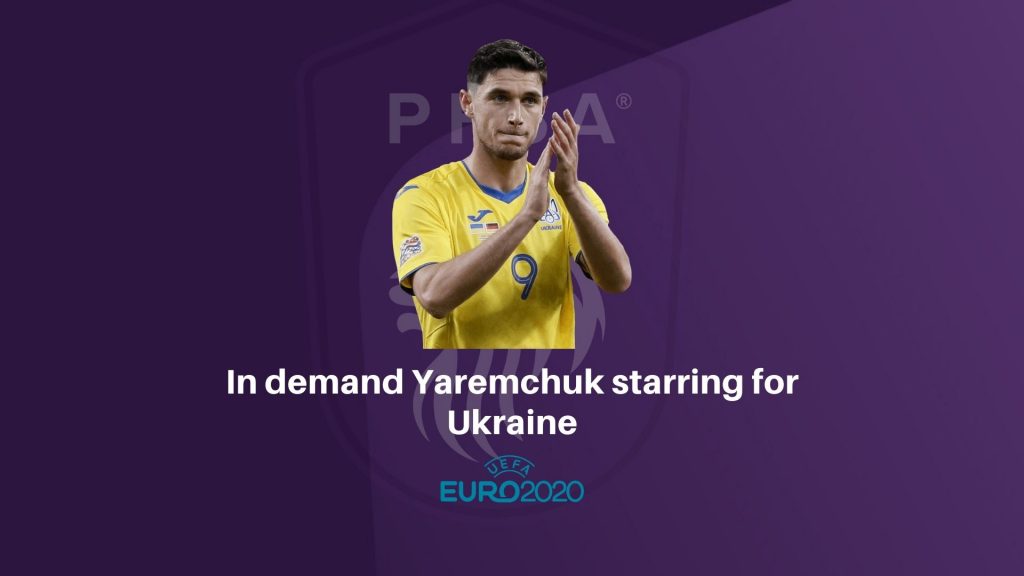 Roman Yaremchuk’s fast start to the Euros with Ukraine has provided further evidence as to why he’s a man in demand in this summer’s transfer window.

Bagging two goals and an assist from Ukraine’s opening two matches against the Netherlands and North Macedonia, his form’s been integral towards Ukraine being in a promising position to progress beyond their group.

The scorer of 17 league goals for Gent in Belgium has importantly transferred his goalscoring into his efforts at the Euros, which has seen West Ham, Sevilla, Bayer Leverkusen and Bologna all recently linked with a move for the forward.

To shine the spotlight on his display against North Macedonia, and the 25-year-old demonstrated his class by putting in an impressive display. Leading the line for Andriy Shevchenko’s men with aplomb, Yaremchuk was a menacing presence for North Macedonia to contain throughout his 70 minutes afield.

Intelligent and efficient with his movement both in front of and in behind the opposition backline, he was constantly probing to be an option for his colleagues. To start with his movement in behind, and the sharpshooter excelled in this regard. Surveying his surroundings so he was awake to openings when an opponent was out of position, caught ball watching, preoccupied with another marker or if a defender stepped out to press, he shrewdly got on his bike, hoping to exploit any gaps. Very good at targeting the gaps between central defenders and the channel between North Macedonia’s wingbacks and outside centre backs, this, in combination with how beautifully he timed, angled and directed his runs, compounded issues for his foes. 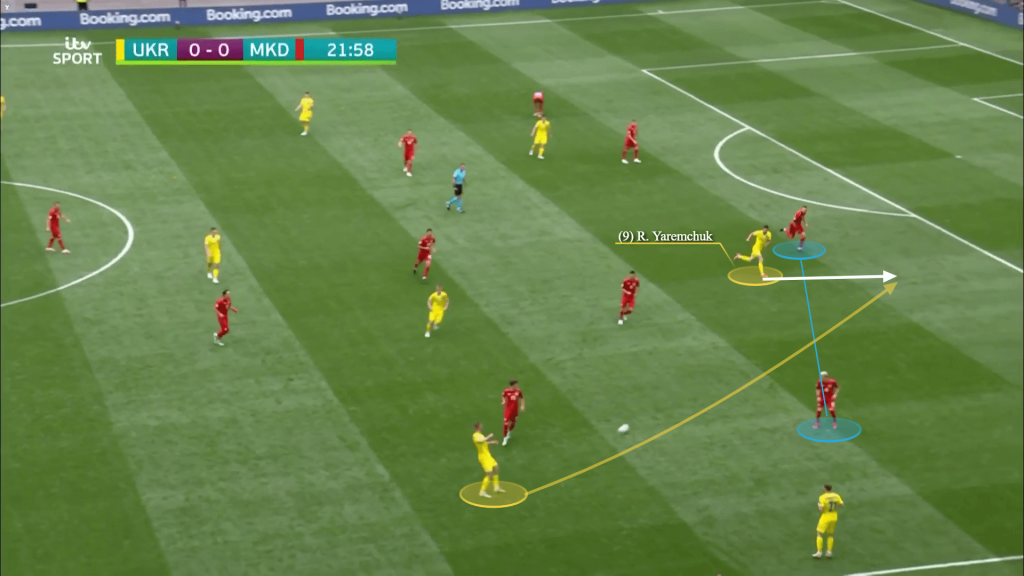 In addition, how he peeled off the back shoulder of his man to exploit the blindside, plus rotated positions with his fellow attackers and used smart double movements and zig zags to unbalance markers to gain separation duly enhanced what an elusive man he was to keep tabs on. 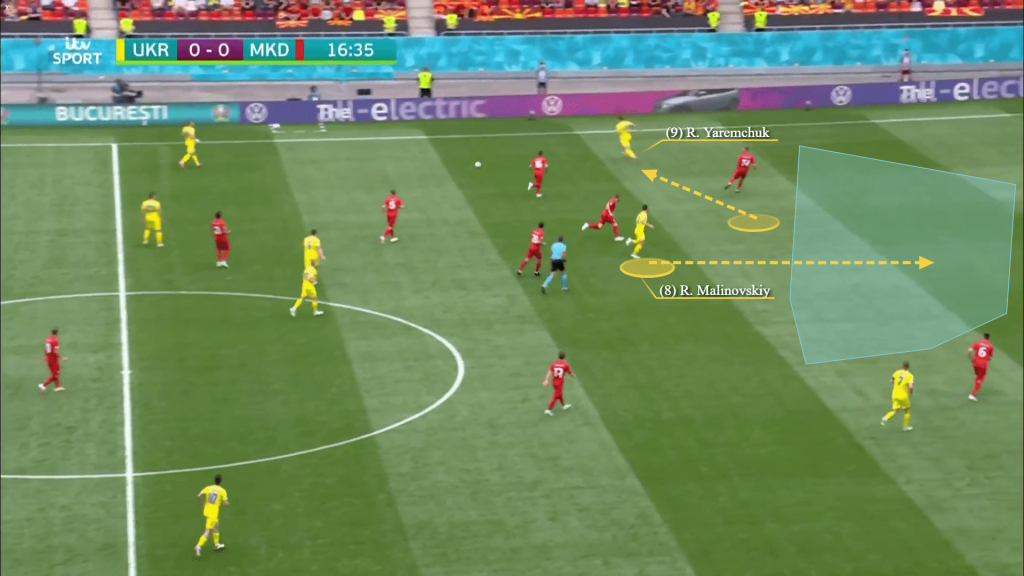 Boasting slick acceleration and a good top speed as well, it came as little surprise when he blended much of the aforementioned in the passage that led to his goal. Here, his initial movement to get in front of his tracker gave him the upper hand to stream in behind. Checking his run cleverly to remain onside, he then latched onto Andriy Yarmolenko’s through ball before steadying himself to score. 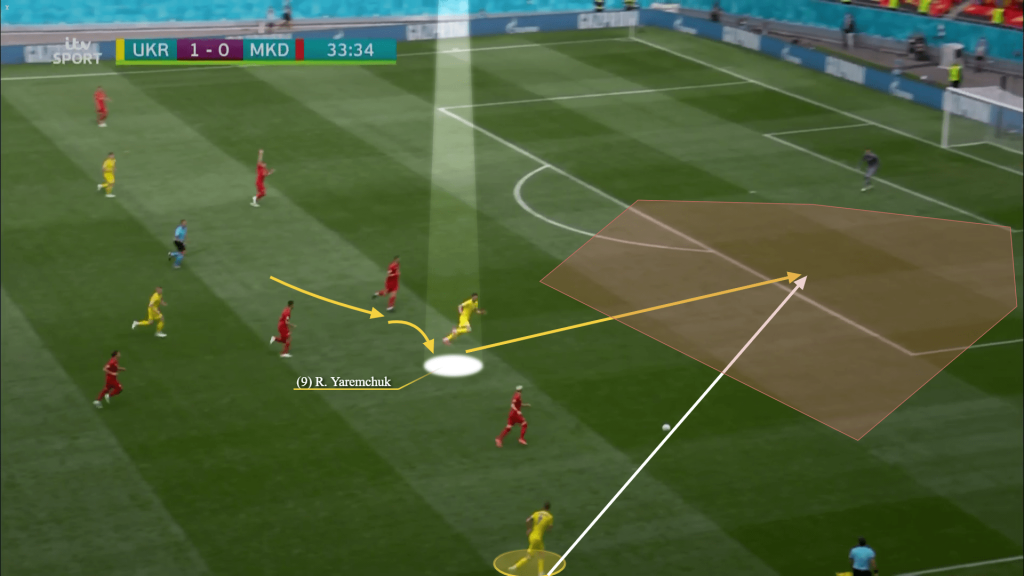 Yaremchuk’s considered runs also meant he was a dangerous presence when venturing the area, for he noticed the position of his foes and where the ball holder was to attack the most advantageous areas he could score from. Darting into the box with intent, the former Dynamo Kyiv hitman offered himself as a fine option for crosses, cutbacks and through balls, with his threat both on the ground and in the air seeing him act as an ideal outlet for teammates. 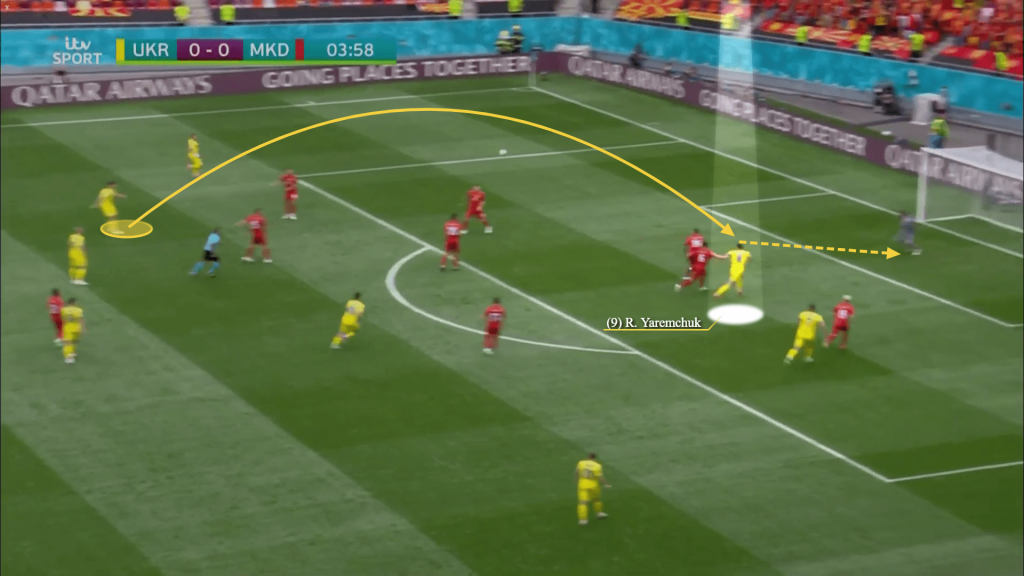 Switching the focus to when he dropped deep, Yaremchuk chose his moments wisely. Waiting for a passing lane to be open and his teammate to be able to see him, he’d sharply come short. Adeptly finding space between the lines to link play and draw opponents out of position, this was a real feature of his play. The fact he’s so strong and used his body and arms to expertly hold off his foes ensured he maintained possession nicely while waiting for an option.

As a result of his quality, North Macedonia regularly committed two markers to him, with Yaremchuk’s positioning also helping to pin them so space opened up between the lines for midfielders and attackers to utilise. Wary not to leave him unattended, this was a key byproduct of his game that warranted praise. 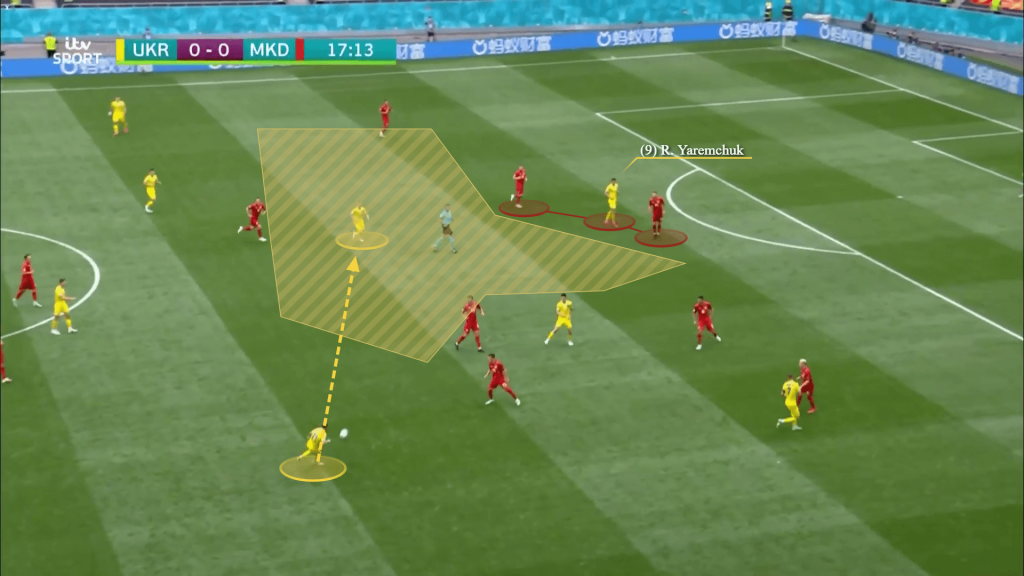 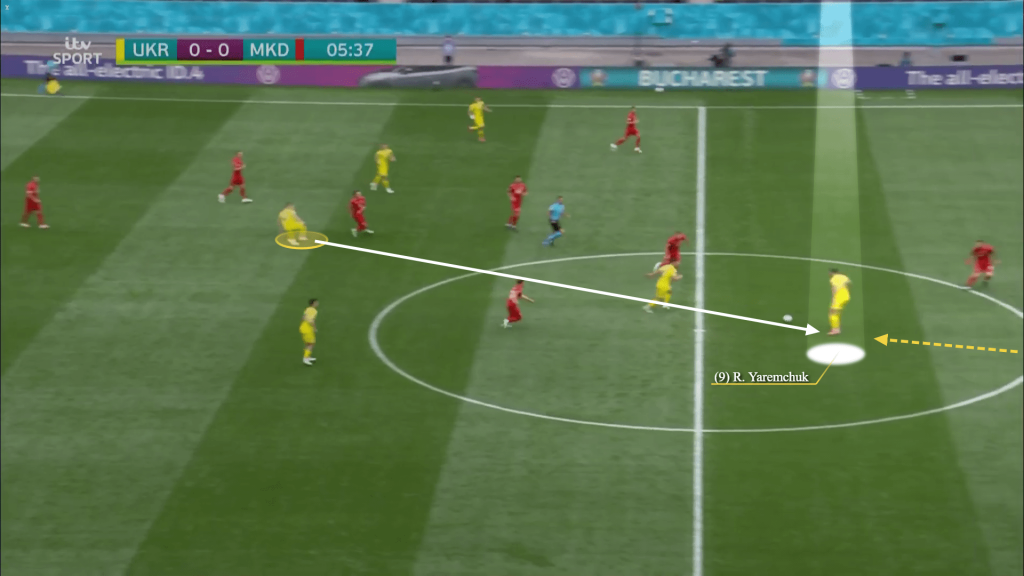 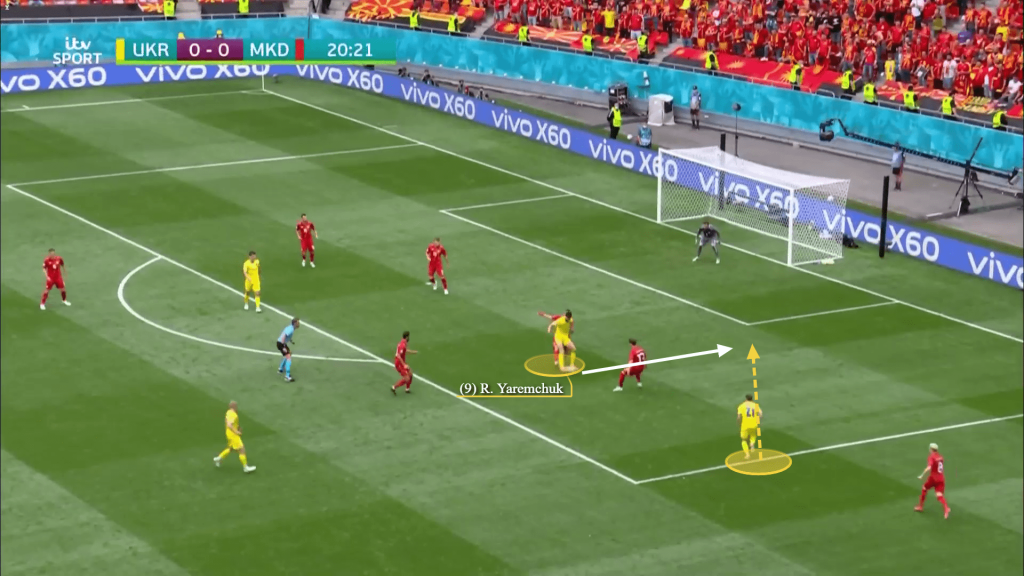 Once the ball was at his feet, there were many occasions where his technique shone. Be it connecting play with some wonderful lay offs, flicks and first time passes, his combination play saw him bring Ukraine’s gifted attackers and midfielders, such as Oleksandr Zinchenko, Yarmolenko, Mykola Shaparenko and Ruslan Malinovskiy into play effectively.

Showing great patience while holding the ball up as he waited for a viable option to arise added to his worth, with his composure and capacity to withstand pressure a joy to watch.

Using his good first touch, awareness and control, it was notable how he adjusted his body to receive possession while screening the ball away from nearby adversaries. This afforded him the platform to turn them before marauding forward on dangerous dribbles and give him extra time to assess his options. 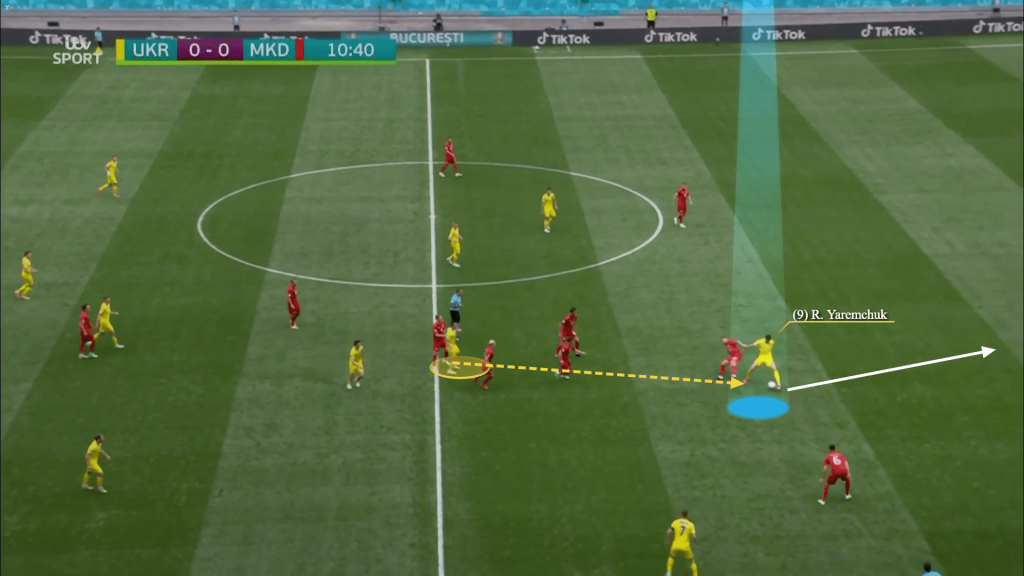 Posing as a fine reference point and target, his aerial threat added to his worth, for he was not only a wicked option for deliveries into the area but also to help his team win second balls when they were forced to go long.

Yaremchuk’s tremendous finish warranted praise too, for the athletic striker took his chance brilliantly. Parlaying power and placement, the way he opened up his body and tricked the keeper by coolly slotting home at the near post was magical. 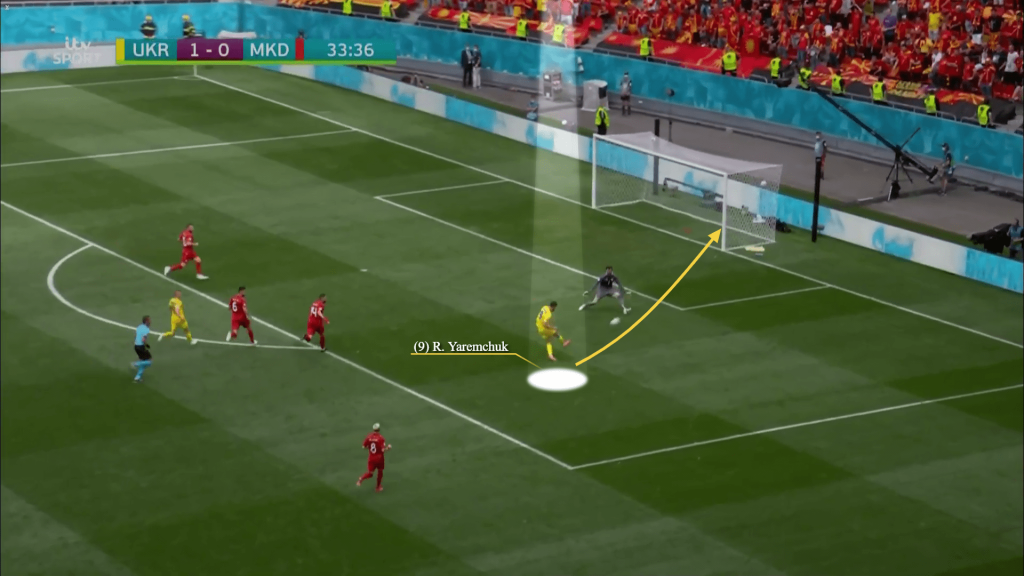 Athletic, physical and powerful, expect Yaremchuk to once again be a key protagonist in Ukraine’s crucial final group game against Austria. As he continues to impress, his stocks notably keep on rising, which will be music to the ears of Gent, who will be expected to now fetch an improved transfer fee between €25 and €30 million for him.

Coming into his prime, the 25-year-old, who’s clearly learnt plenty from international coach and former striking legend Shevchenko, is justifiably catching the eye of many.

Whoever secures his services will be lucky to have him, with his future set to be decided once Ukraine’s Euros journey comes to an end.