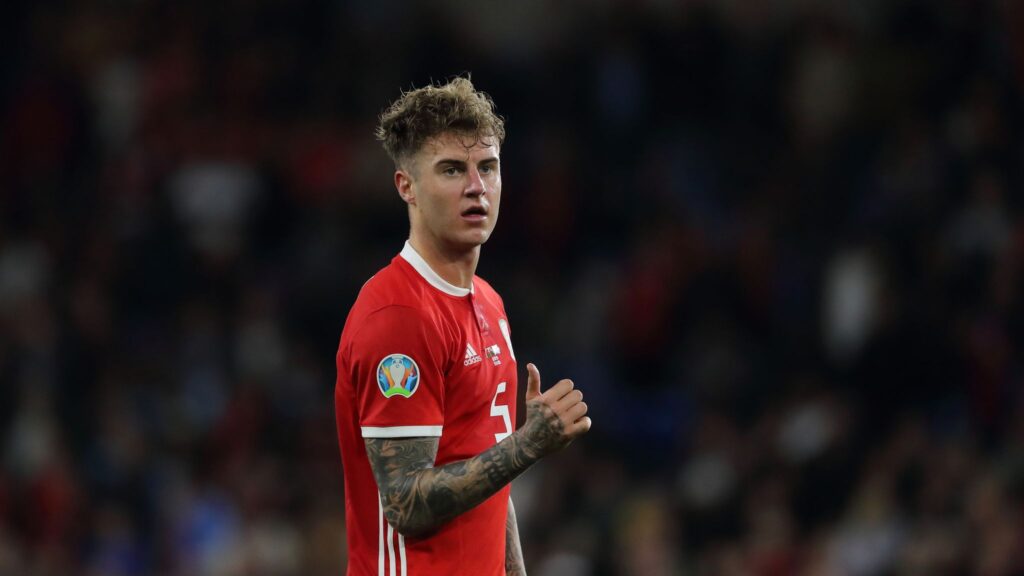 Making waves both at club level with Swansea City and on the international scene with Wales, Joe Rodon’s form has really caught the eye this season.

Going from strength to strength since making his Swansea league debut in 2018, he firmly established himself at his boyhood club, who he joined at the age of eight. Having made 55 first-team appearances, the 22-year-old certainly stamped his mark in the Championship, for the likes of Tottenham Hotspur, Leicester City and West Ham United showed interest in acquiring his services, before Spurs snapped him up last week.

Handling himself in an accomplished fashion in the hugely demanding and physical Championship, he relished the rough and tumble nature of England’s second tier, which should hold him good stead to step up to the Premier League.

Aggressive, intense and powerful, Rodon excels in duels both on the ground and in the air. Standing a towering 193 cm and possessing a fine ability to read the ball’s flight and time his leaps, opponents have found him a formidable foe in aerial battles. Brave and full of authority, once he decides to challenge, he attacks the ball with vigour to clear the danger or nod the ball down to a colleague. Be it from goal kicks, set pieces or when dealing with crosses into the area, he usually deals with danger smoothly. The fact he smartly adjusts his feet and body depending on the origin of the delivery adds to his value here, as he usually sets himself ideally. 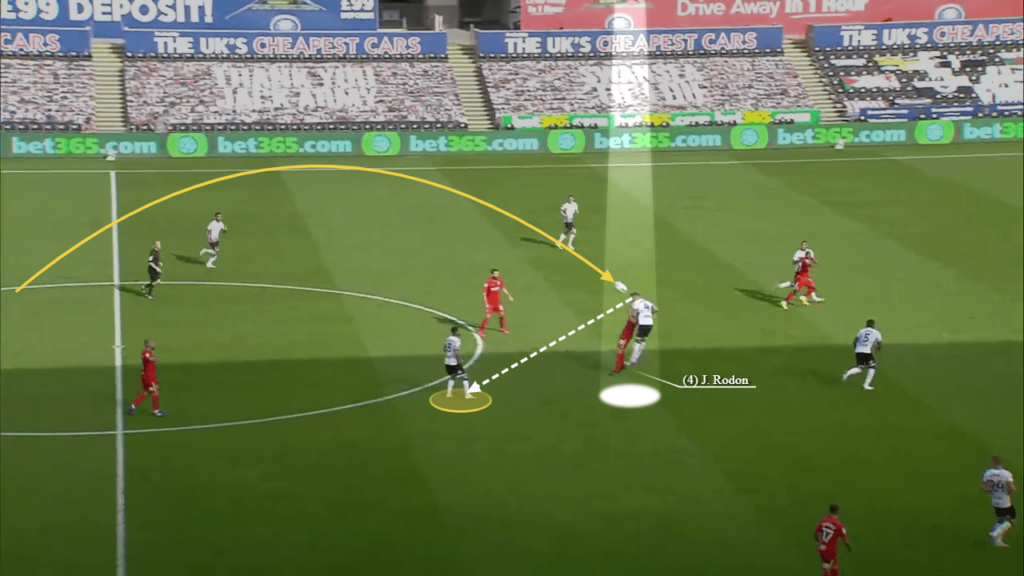 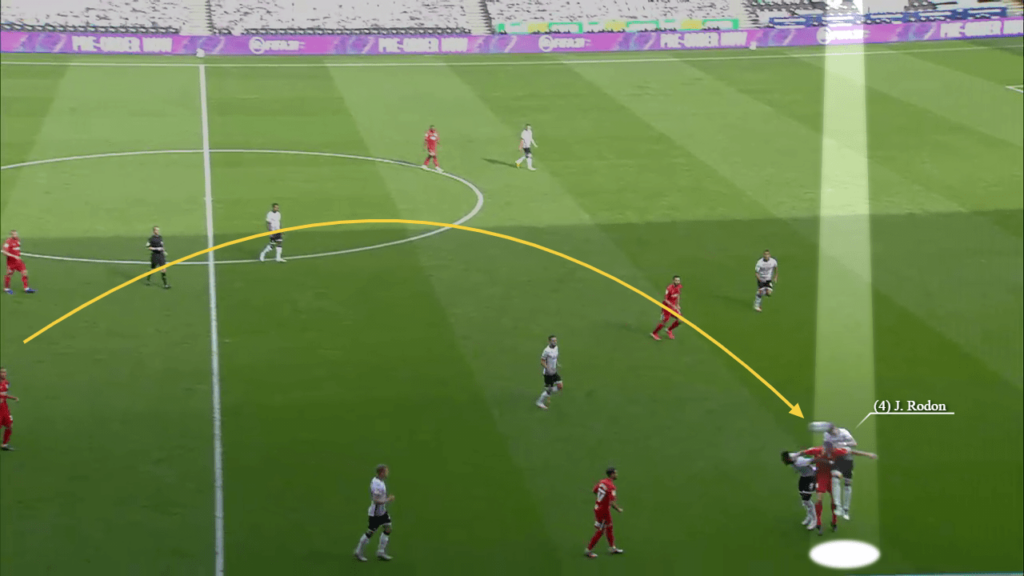 Meanwhile, in ground confrontations, the rangy stopper’s a force to be reckoned with too. Stepping out with conviction when applying an intervention, more often than not, he recovers possession or helps force a turnover. Using his long legs and judgement has added to his effectiveness, with him making himself as wide as possible to stretch out to reclaim the ball or block off his opponents’ options. 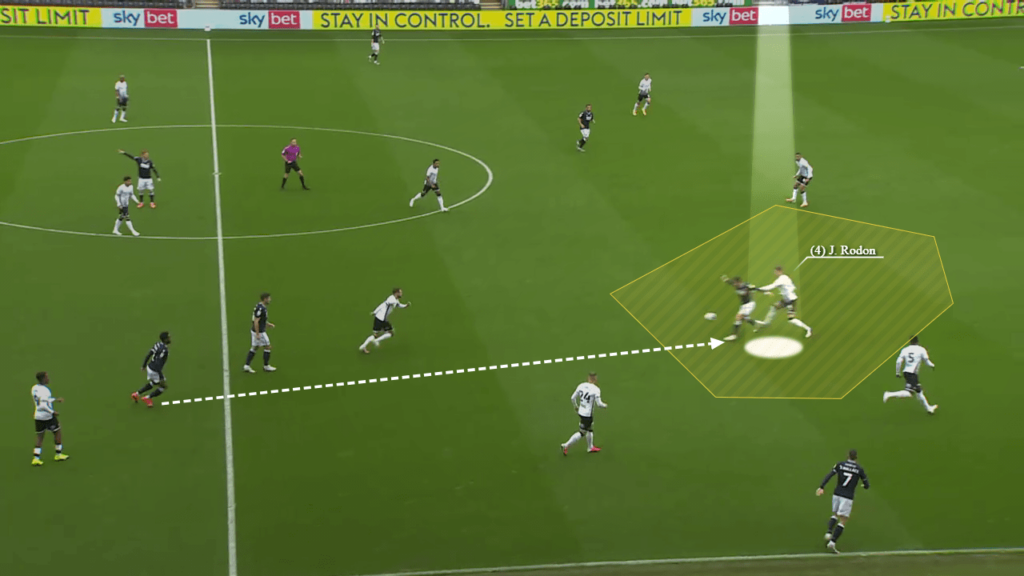 Having developed an exciting partnership with Marc Guehi and Ben Cabango in central defence, something he’ll hope to do at Spurs with his new comrades, in terms of his positioning, he’s been largely sound. Helping to organise his backline so they’re well spaced, the trio recognised when the moment was right to step up, drop back, stay in shape or cover for one another.

If one responded to a pressing trigger like when their opponent dropped deep with their back to goal, they were usually covered by a colleague to ensure an opponent couldn’t exploit the vacated space. Showing good awareness and an admirable understanding, they worked cohesively to nullify opponents and be on the same page. 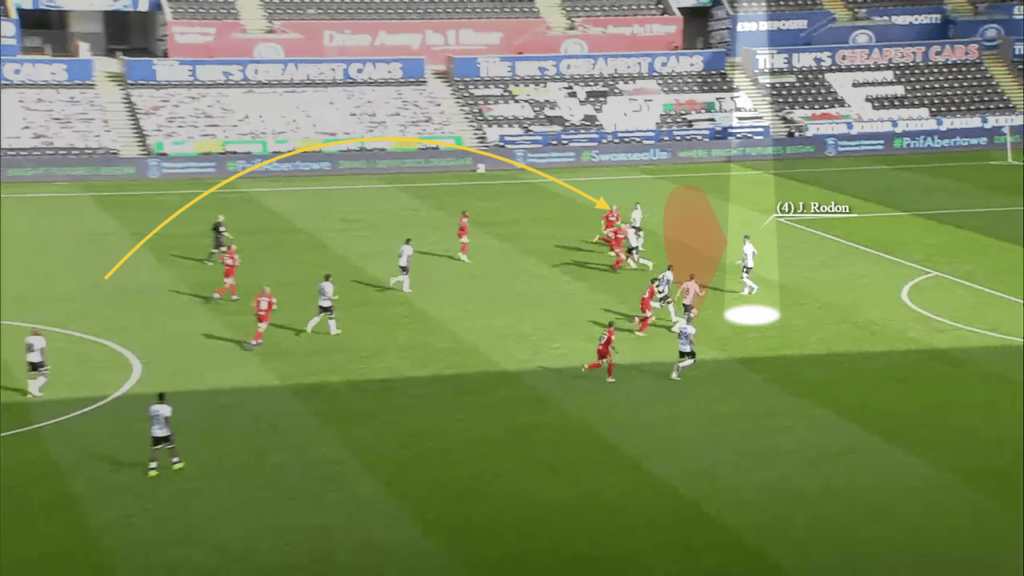 Awake to runners in behind or when midfield runners slip beyond their marker, Rodon diligently tracks runs with his decent pace and concentration. Reading the play coherently, this means he also steps out to follow his man deep, is alert to channel runs and can predict what action to take when crosses or cutbacks arrive into the box. 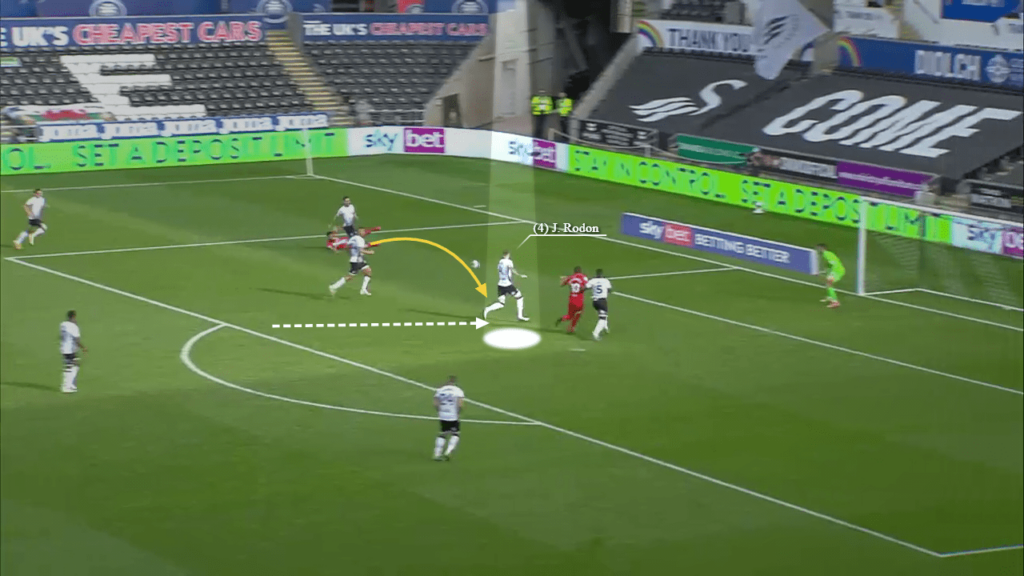 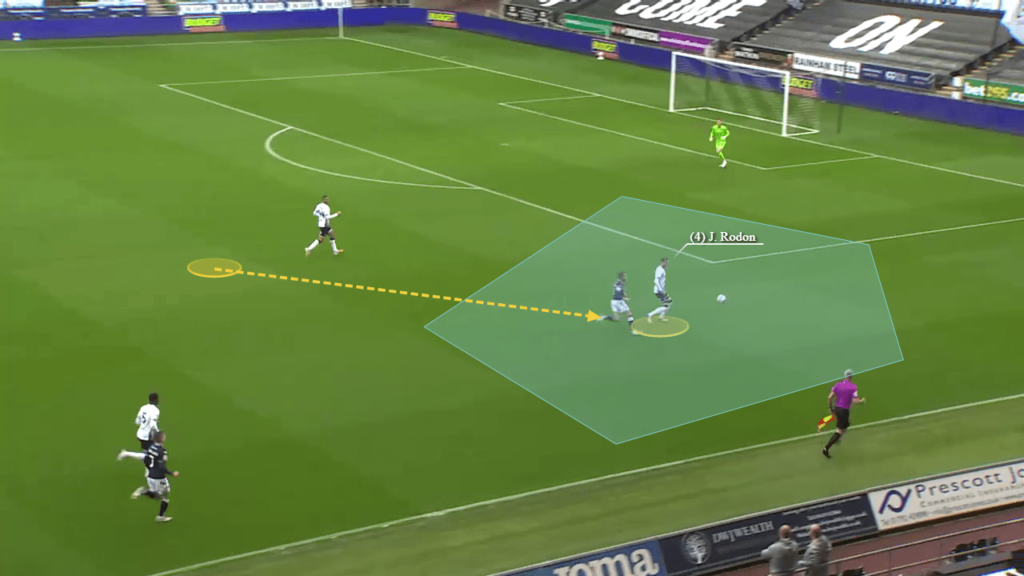 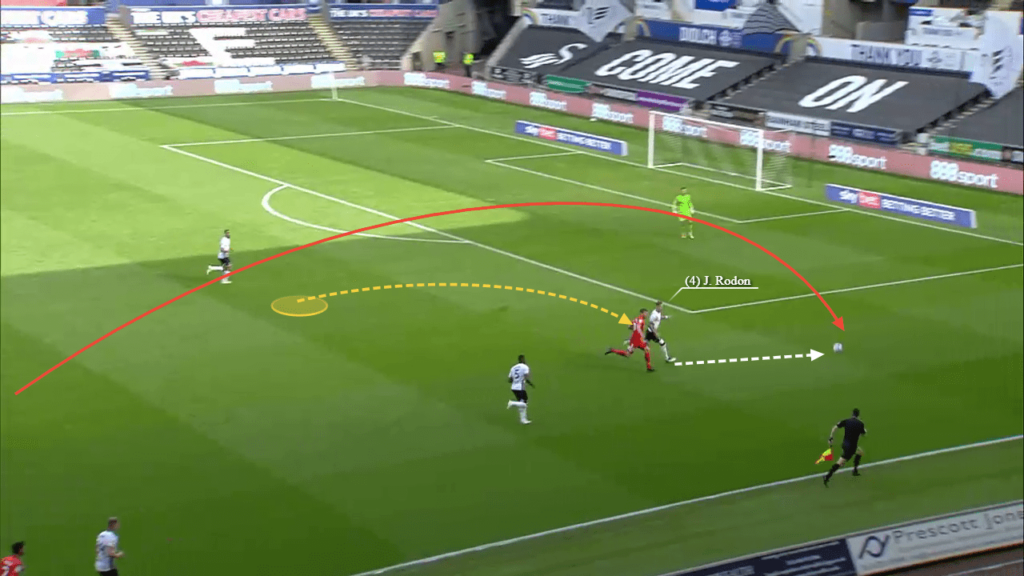 So strong and keen to impose himself on his adversaries, he’s used his hulking frame to unbalance his markers, in order to provoke errors or turnovers. Although he does suffer the odd lapse, which is to be expected of a player of his age, the positives have overwhelmingly outweighed any negatives.

Equally impressive on the offensive side, Rodon’s brilliant on the ball too, passing and carrying the ball with aplomb. A fine exponent of Swansea’s possession based style implemented under former manager Graham Potter and now Steve Cooper, his composure, patience and technique have ensured he stands out.

Hitting his passes with incision and clarity, the central defender is a key man when building out from the back. Capable of hitting a variety of passes over short, medium and longer distances, this has helped him break the lines of the opposition to help Swansea progress through the thirds. Whether launching booming switches of play, splitting passes into the feet of his attackers, disguised diagonal passes or recycling possession while waiting for an opening, Rodon’s distribution has been a vital aspect. 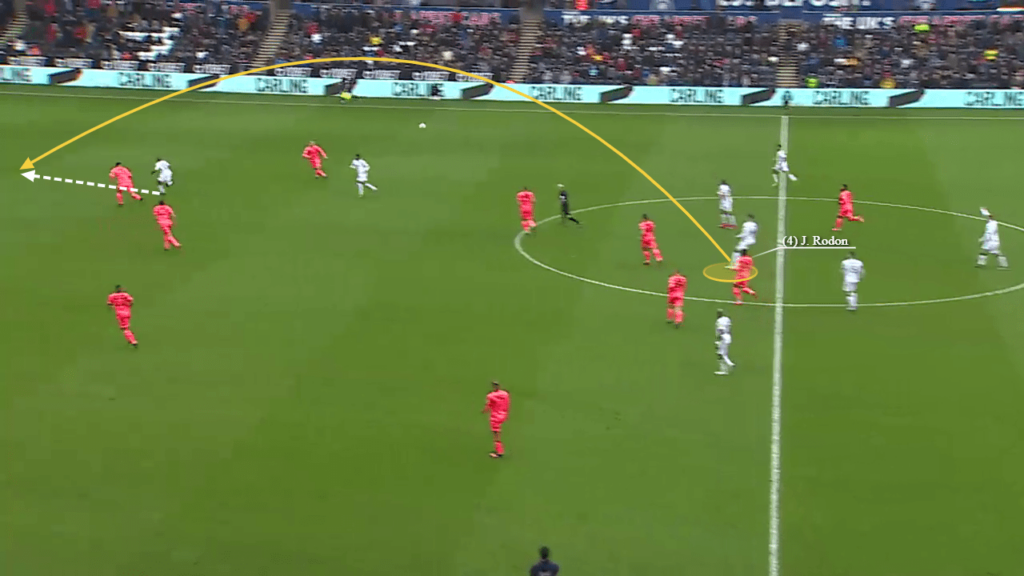 So comfortable on the ball and rarely rushed, he coolly dribbles upfield, hoping to lure out pressers to either bypass them or find the free man laterally, diagonally or vertically that may become available. By shrewdly performing changes of pace and direction, fake passes and clever body swerves, this has not only bought him time to assess his options and allowed him to outfox enemies but shifted opponents to open passing lanes.

Progressive, ambitious, but still quick to identify when to opt for the safer option, he’s a real asset in attacking sequences.

Thriving at his boyhood club and now an integral member of Ryan Giggs’ Wales squad, it appears only a matter of time before we see the gifted Rodon shining in the Premier League with Tottenham.

While he may take some time to adjust initially, there’s every reason to suggest he’ll be fine, for he boasts all the necessary ingredients required to flourish at the highest level.