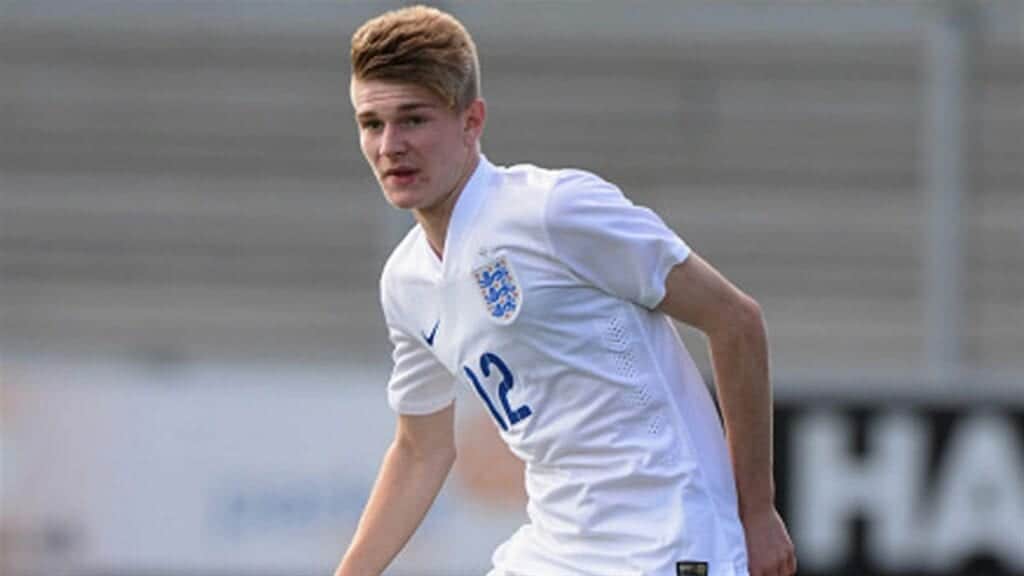 After impressing immensely in Middlesbrough’s preseason exertions, it was great to see Jonathan Woodgate reward Hayden Coulson with his senior debut against Luton Town for the season opener.

Despite being put to the test by Luton’s Andrew Shinnie, the youngster held his own on his way to putting in a shift littered with upside. Exuding plenty of dynamism, intensity and aggression, Coulson rarely looked out of place at the Championship level from his left-back post. He then backed this up with another accomplished showing vs. Brentford despite his team going down 1-0.

His impact has been most keenly felt on the attacking end, where the 21-year-old’s marauded forward at every available opportunity, as he’s provided width and depth to Boro’s attacks. His nicely timed and directed runs have notably stretched backlines horizontally and vertically, which forces a defender to leave his post to deal with him as his man often can’t keep up with his booming runs. 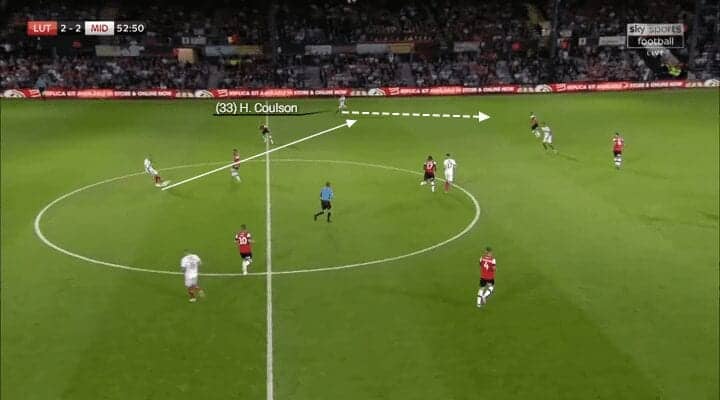 Offering himself as a terrific option for crossfield switches or to bypass the press, he often pushes into high and wide positions, where he can isolate himself in 1v1 situations to drive at his marker. 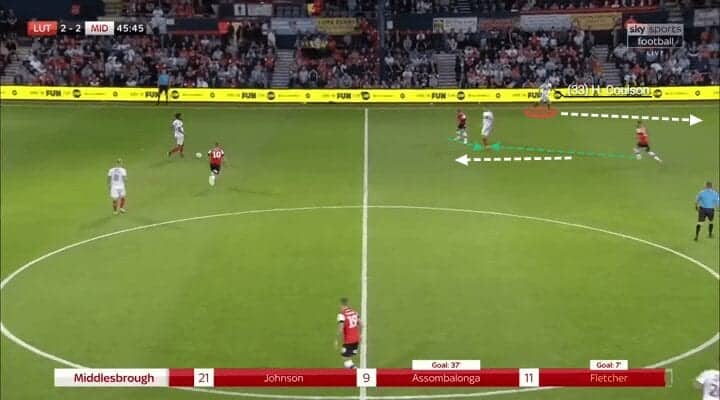 In addition, with the defence inherently shifting to the ball near side, this has left plenty of room for him to receive when switches have been on.

Once in possession, the Englishman’s showed off his sharp and direct dribbling qualities. Displaying confidence and positivity, he’s used his aptitude here to get at his man, as he’s looked to beat his man before firing in a cross or a cutback. Showcasing his neat array of feints, shoulder drops and his wicked changes of pace and direction, Coulson’s been a real menace to contain. Very hard to read for his man due to the sheer speed and slightly unorthodox nature of his actions, he’s certainly provided some nice upfield impetus. 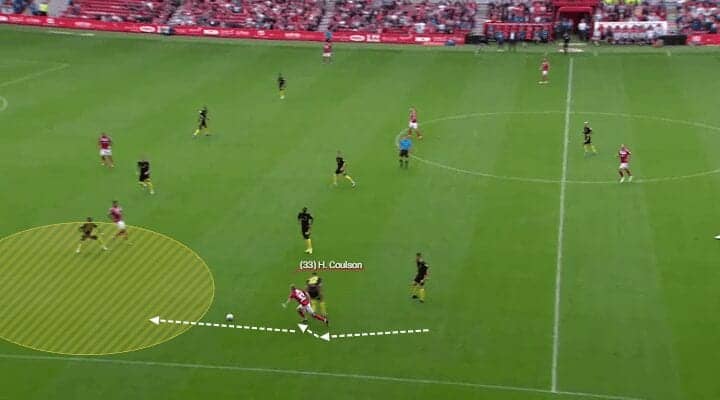 Possessing solid ball control and awareness, he’s weaved away from danger effectively before calmly finding a teammate too.

Moving onto his passing, and his wand of a left foot has served him well on many occasions, in order to connect play, construct passages or hit booming long balls. Aside from launching counter attacks, hitting dangerous crosses and looking to play crisp passes into the feet of his attackers, he’s also recirculated possession calmly when the progressive option wasn’t on. 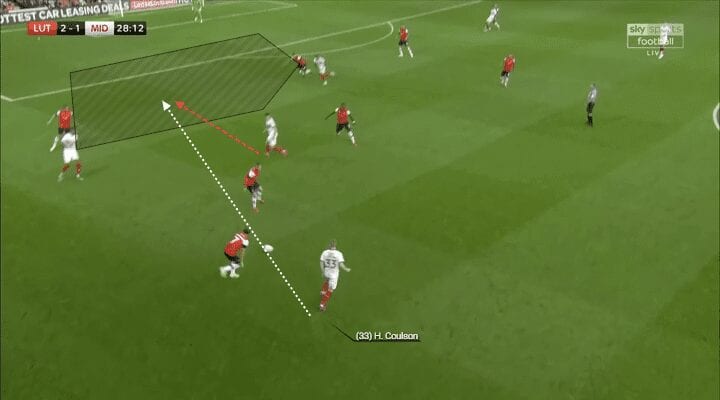 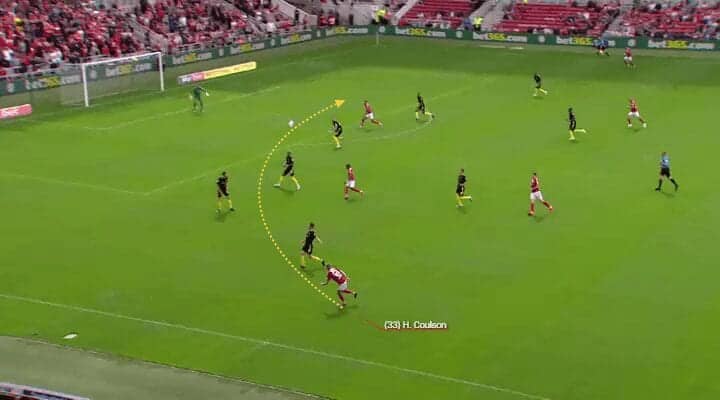 Meanwhile, on the defensive end, he’s undertaken his duties efficiently. Although given the odd awkward moment, he’s stood up to the challenge well. So rapid to react to his opponents dribbles, it’s been positive how he’s done a fine job of moving laterally to match markers and known when to jockey them or nip in and apply a tackle.

Not afraid to get stuck in, he’s stepped out with conviction and physicality when breaking up play. Despite giving away the odd foul, his intent has been admirable, as the positives far outweigh any negatives here.

Pressing with gusto and purpose, Coulson’s picked up on pressing triggers swiftly, like when an opponent receives with their back to goal or in an open body posture, with him making life tough for them to enjoy a clean touch or turn him. 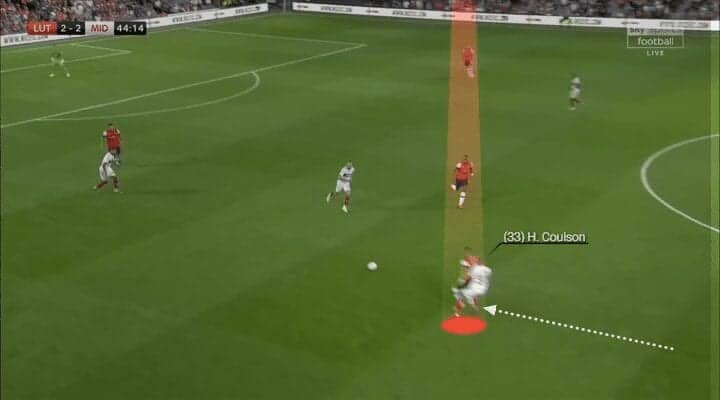 While he’s been caught out on the odd occasion in transition due to his high positioning when attacking, this can’t be blamed entirely on him, for he’s clearly instructed to surge upfield, which can consequently leave gaps when a turnover is committed.

All things considered, there’s been a lot to admire about his fast start to life in the Championship. “He did fantastic,” said teammate Lewis Wing after his bow vs. Luton. “He really showed what he is about.

“Hayden has probably been our best player in preseason so he deserved the chance. And he did really well. He showed he’s quick, he gets forward, he is always thinking forward, he is sharp, he won the penalty.”

Looking at his numbers from his first two games, and he’s stacked up pretty well too, with his 7.35 interceptions per game, 3.21 clearances pg, 2.16 recoveries in the opposition half pg, 1.37 won aerial duels pg, 4.13 dribbles pg at 60%, 5.05 progressive runs pg, 1.38 shot assists pg and roughly one accurate cross pg depicting his strong output.

Coulson’s certainly vindicated Woodgate’s decision to select him on his way to proving he can handle the step up in class. “Hayden has been a standout performer throughout pre-season. I tried to push him two seasons ago, when Tony Pulis got the job. We have a terrific environment for him now, he can play in a number of positions. He has been fantastic in training and in my opinion he will be going places,” Woodgate recently mused.

Still with so much scope for improvement and fine tuning in his game, especially on the defensive end, working under former defender in Woodgate should do wonders for his development. Set to face stiff competition for a starting berth from George Friend and Marc Bola, it’ll be intriguing to see how he fares this season.

If he can replicate his early performances on a consistent basis, though, then there’s every chance he’ll be a steady contributor to this exciting Middlesbrough outfit.