Gordon a shining light in Everton’s season of darkness 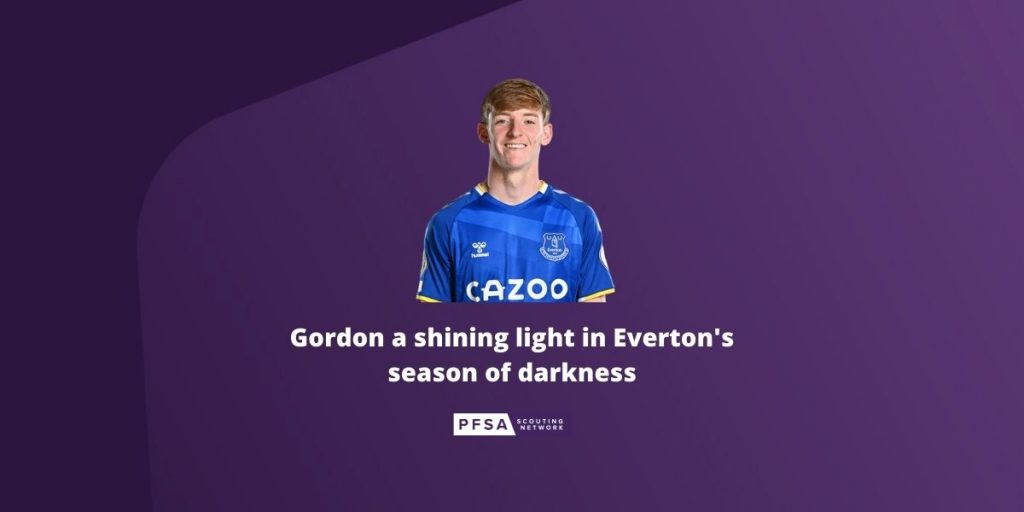 Anthony Gordon’s impressive form for Everton has been one of the few shining lights in what’s been a season mostly filled with darkness for the Merseyside outfit.

Battling relegation having lost 11 of their last 15 league matches, it’s certainly been a season to forget for anyone associated with the Toffees. But at least homegrown prospect Gordon has given them something to cheer about on his way to bagging four goals and two assists.

Importantly, the talented youngster also has a remarkable work ethic and attitude to match his skills, which is something that has further endeared him to the fans, his teammates and his managers this crusade (firstly Rafa Benitez and now Frank Lampard).

“He is an honest, hard-working lad and he lives properly. He has bags of ability so I think if he keeps his head down and keeps working hard, he has the world at his feet.”

Injecting plenty of pace and dynamism into his team and playing with confidence despite his side’s current predicament, the 21-year- old’s played with a maturity and belief that belies his tender years and experience.

Giving his team a massive boost going forward, he’s been a nightmare for defenders to handle due to his speed, dribbling and intelligent movement.

To start with his ball carrying, and he’s a master at beating opponents or gaining room to unleash shots or passes. Capable of outfoxing foes with sharp stepovers, whirring feints, swift shimmies and wicked changes of pace and direction, he’s a handful for defenders to manage. Boasting a low centre of gravity and impressive strength on the ball, he rides challenges well and withstands pressure, thus helping him win fouls and draw multi markers to free up a teammate.

The way he uses all parts of his foot, is proficient on both feet, twists and turns away from danger and excels at using fake shots and passes to unbalance enemies adds to his nuisance.

Unpredictable, powerful and explosive, Gordon’s dribbling provides a threat in so many situations such as in isolation duels, on the counter and when his team is building up in a slower, methodical fashion.

The English U21 international’s progressive passing is another important string to his bow. A very handy chance creator, who uses his good vision and ball striking technique to frequently set up teammates or find a free man in promising positions within the final third, Gordon’s distribution has been full of upside.

Crossing the ball with conviction and accuracy, this sees him conjure openings both with his open play cutbacks and aerial crosses, plus through his classy set pieces. Able to hit his deliveries with power, dip, curl or loft, the graphics below illustrate his aptitude in this regard. 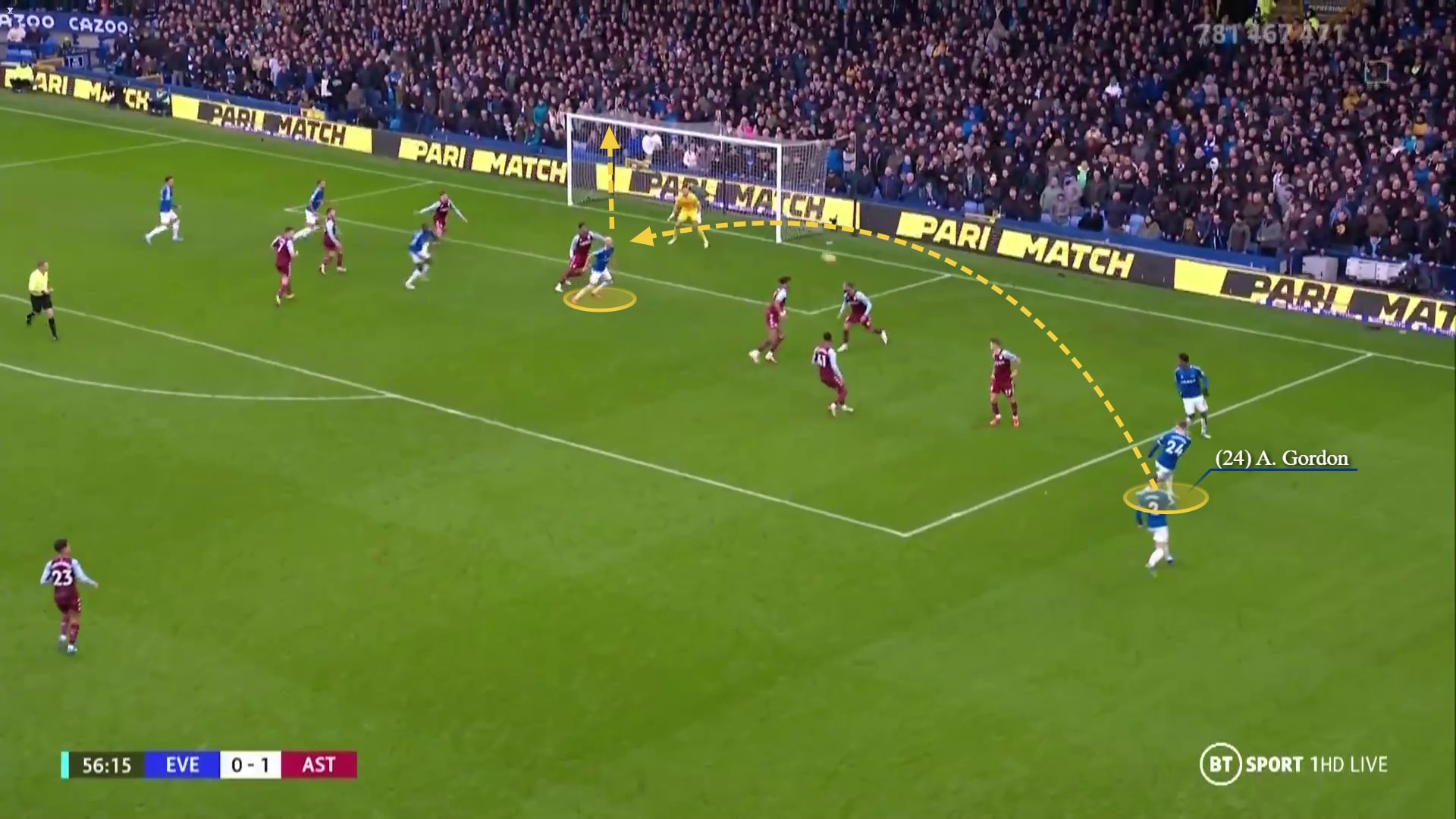 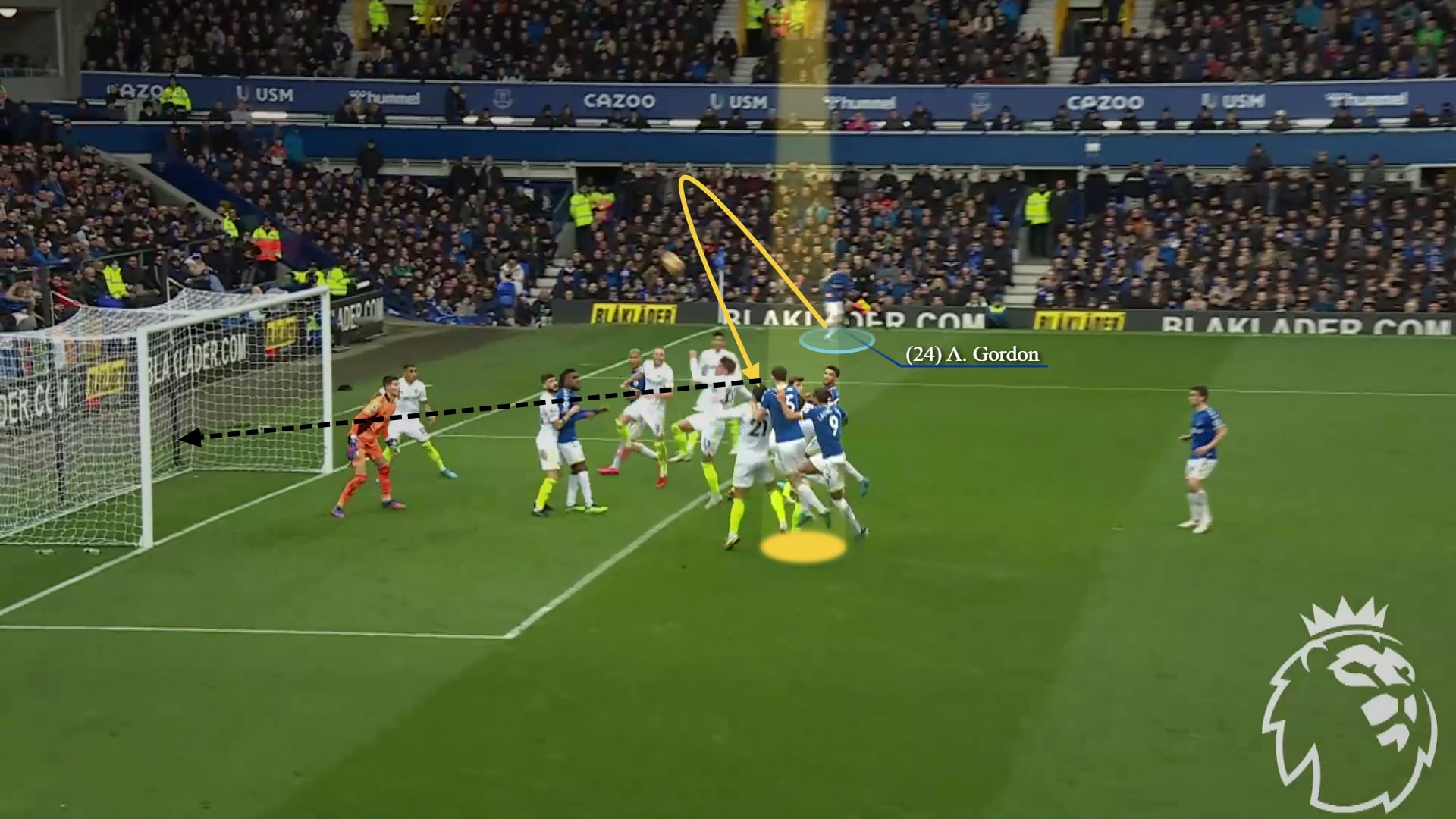 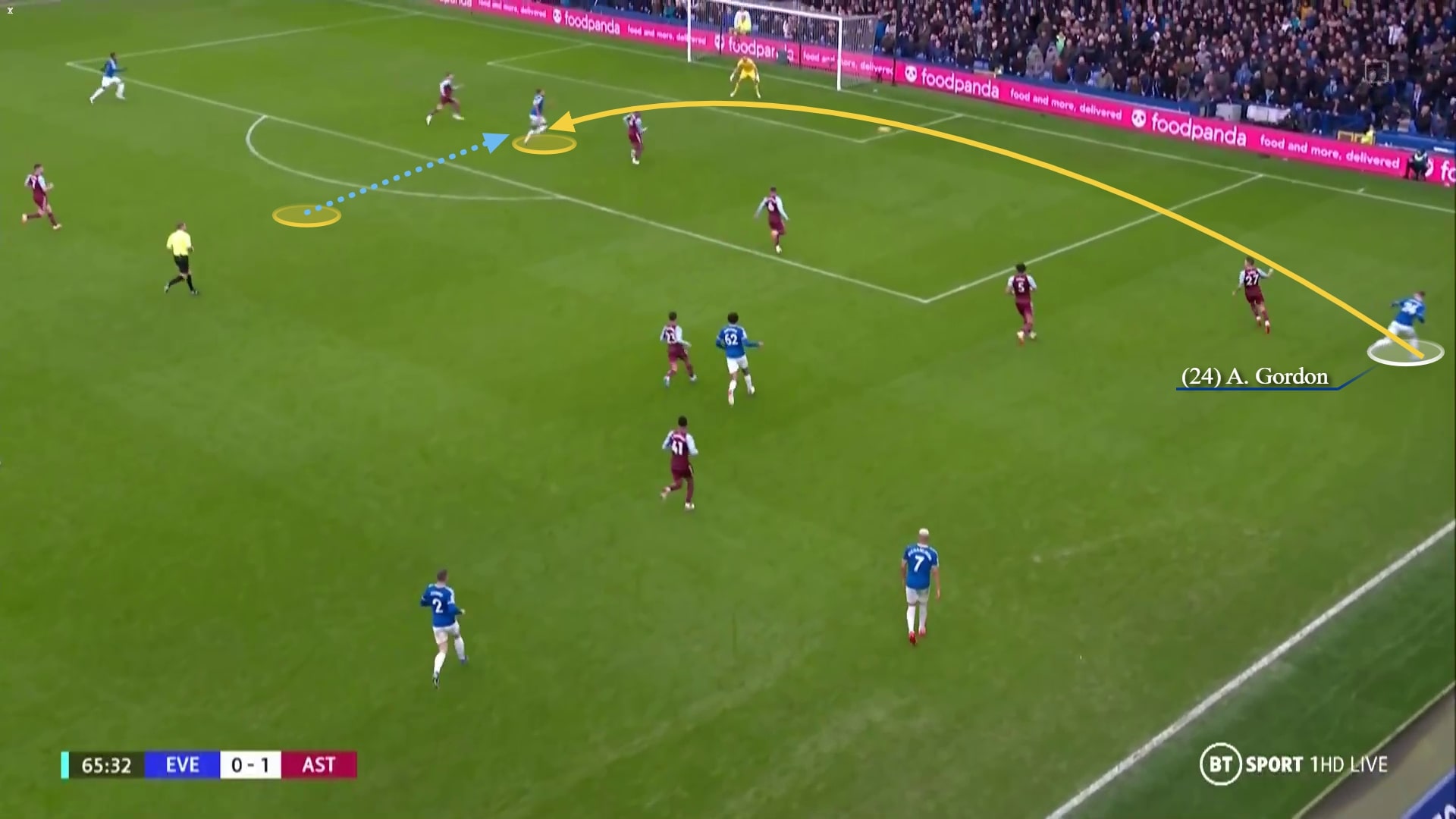 Also possessing the ability to unlock defences with measured through balls in behind, line breaking infield passes and via wonderful one-two combinations and flicks, this amplifies his worth with the ball at his feet. Moreover, how he exhibits good composure prior to executing his actions is a highlight as well, as he handles pressure admirably considering his limited top level experience. 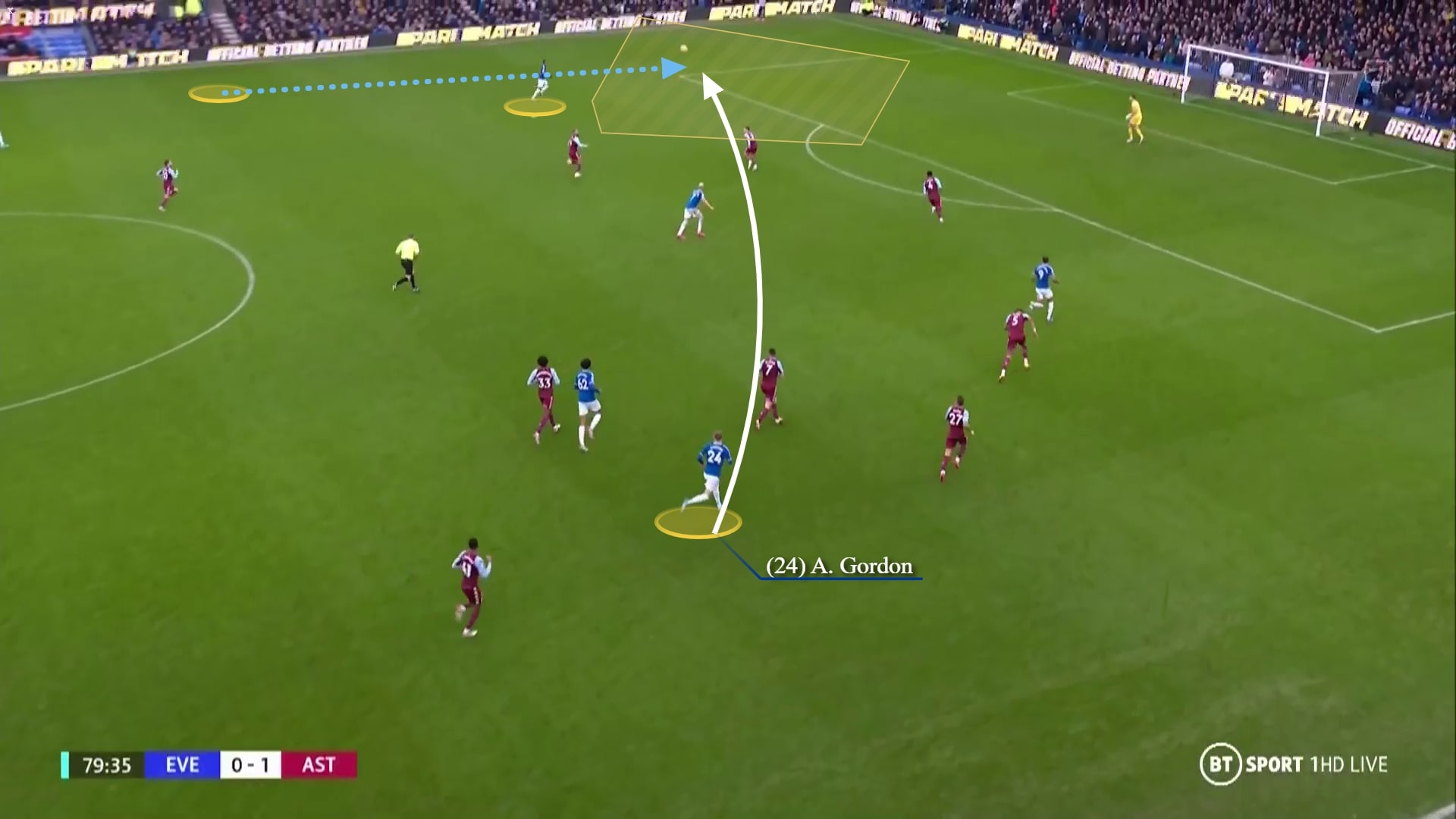 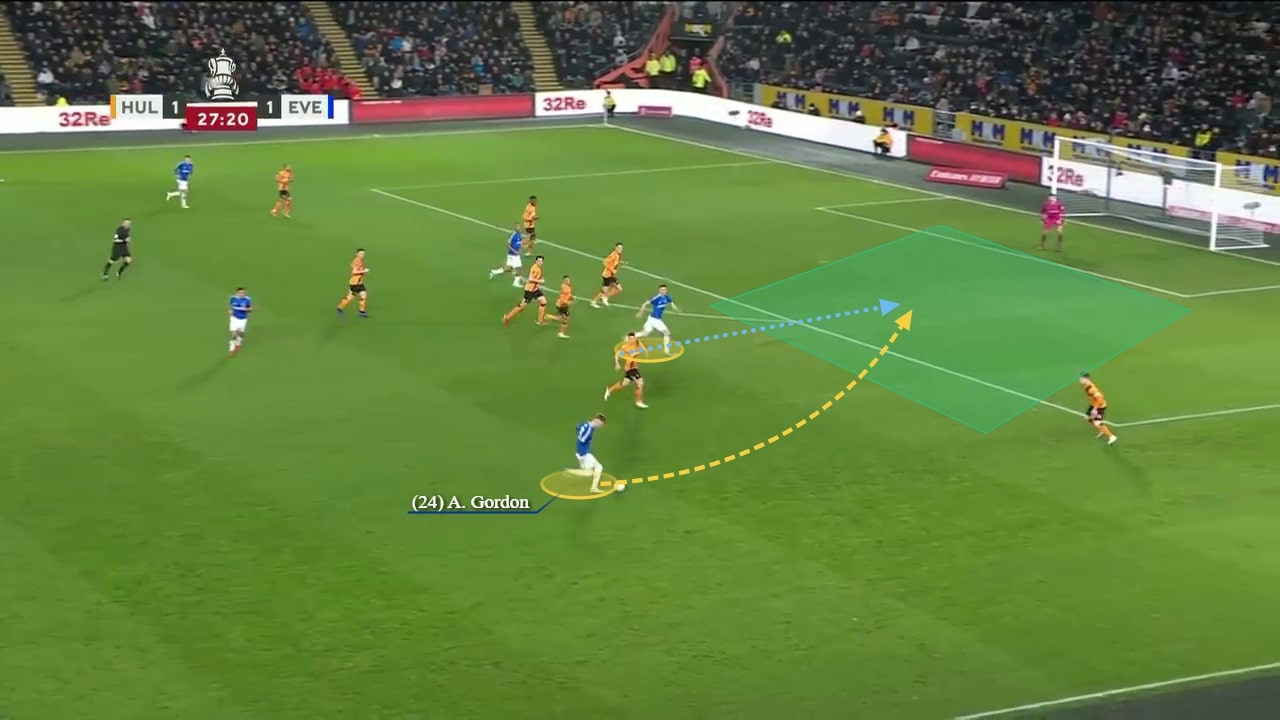 Gordon’s intelligent movement takes his game to another level, for he can impact proceedings wonderfully with his prowess here. A direct and fast runner in behind, he does a fine job of stretching backlines with his smartly timed runs. Providing an excellent outlet to breathe life into attacks, once he sees a colleague in a position to pinpoint him, he gets on his bike.

In doing so, not only does he strain rearguards horizontally and vertically, but he also wreaks havoc in transition and when embarking on blindside runs into the box. Successful at gaining separation and exploiting vacant spaces, his astute movement into the box to evade markers has been a huge positive, with him alert to the positioning of teammates and defenders so he can target unoccupied pockets. 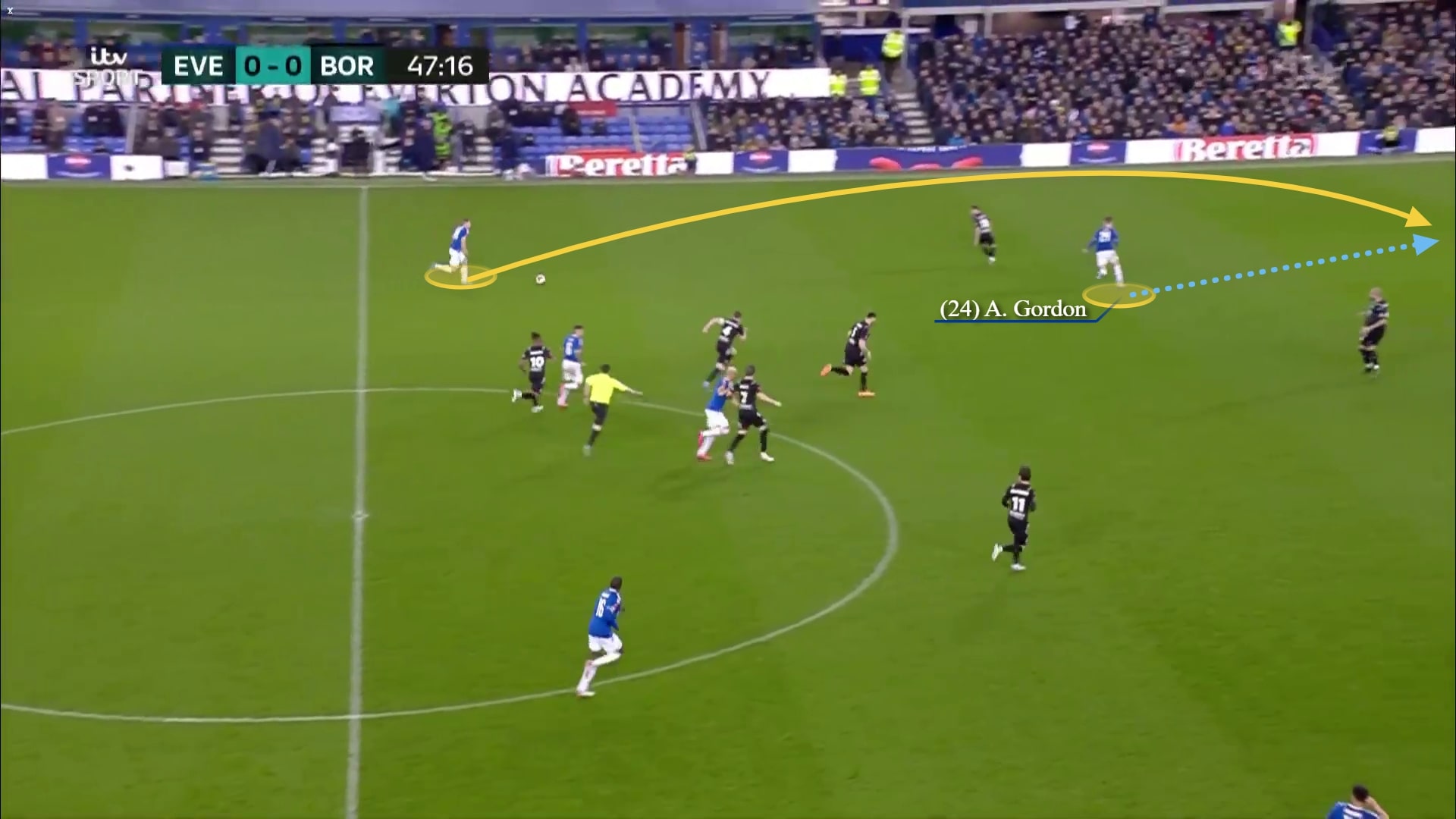 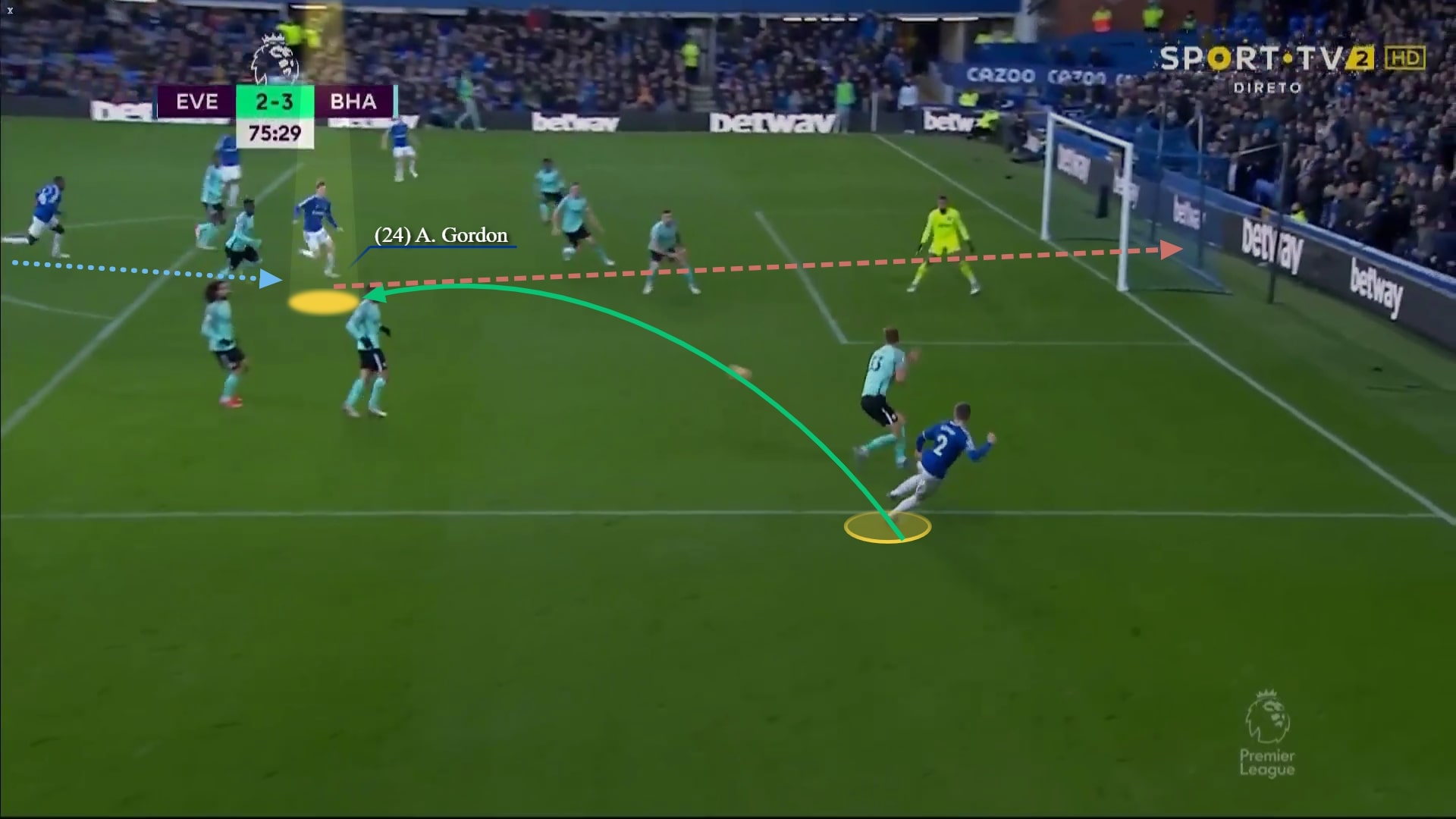 It’s also been encouraging to see him take up terrific positions infield in the half spaces and between the lines, as the man who’s previously operated as an attacking midfielder has clearly maintained his ability to find space in these strategically key areas. The Boreham Wood match was a fine case in point, where he persistently formed overloads centrally and in the half spaces, evaded markers and drew foes to open passing lanes on his way to enjoying a fantastic match. 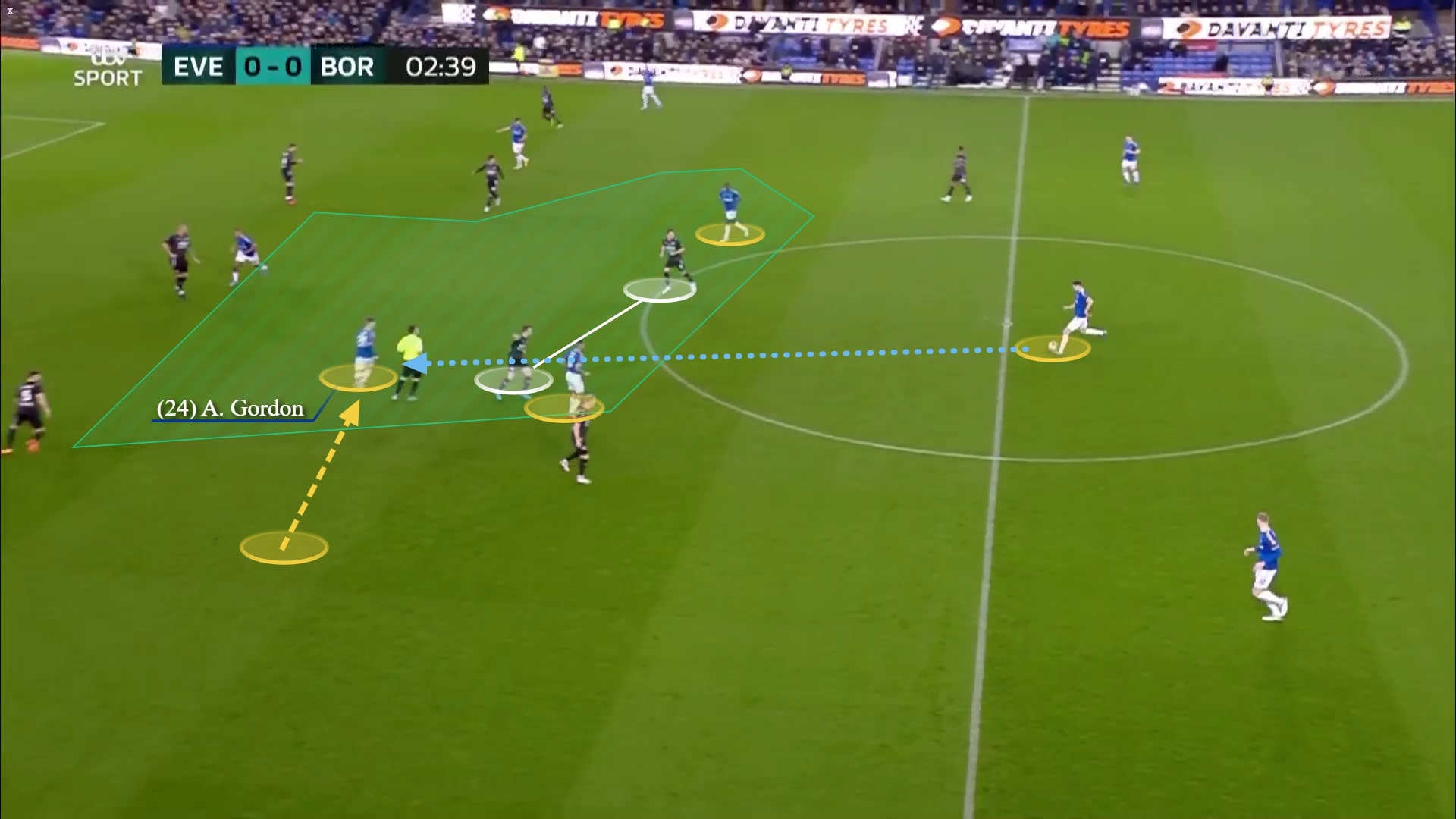 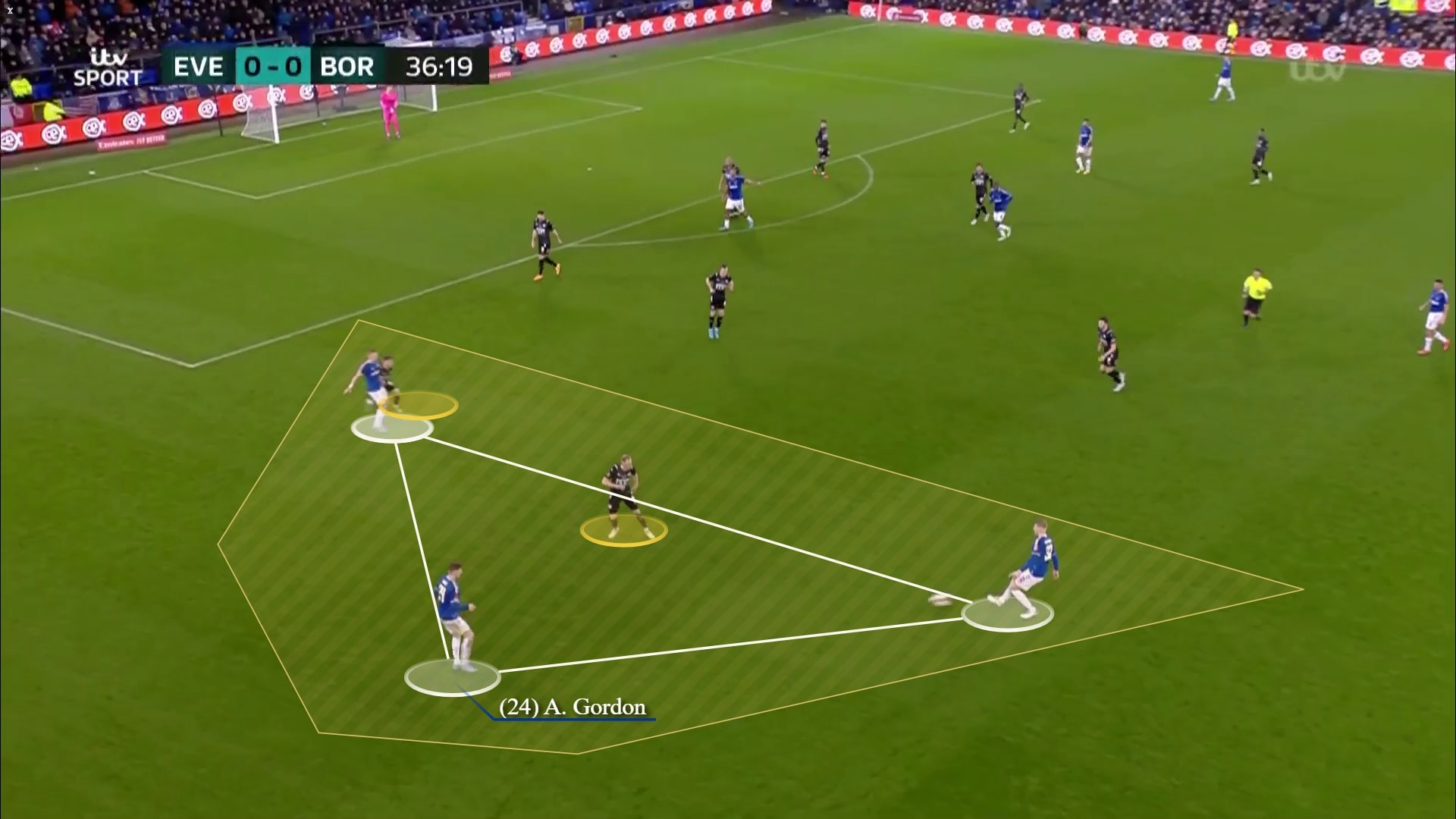 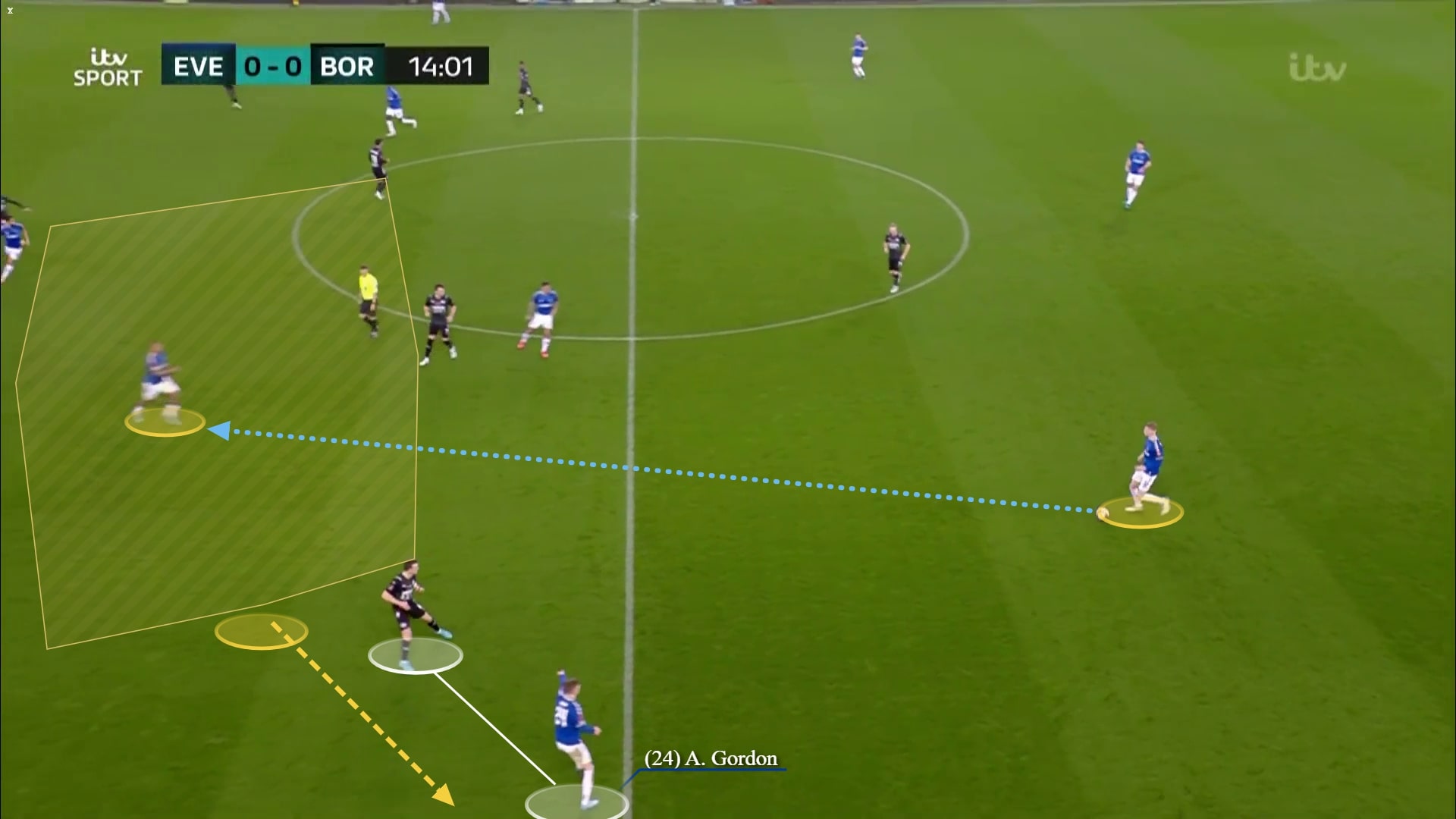 Using many variations and aware of his surroundings, the lively attacker has certainly been a challenge for defenders to deal with even if his team as a whole are struggling mightily at present.

Meanwhile, on the defensive end, the tenacious youngster gives his all for the cause, with his fitness, stamina and determination holding him good stead to contribute manfully here too.

Endearing himself to the fans with his aggressive pressing, dogged tracking back, toughness in the challenge and the way he supports his teammates when needed, Gordon’s been a vital contributor in this phase.

Coming on leaps and bounds this campaign after clearly learning plenty working under some quality coaches in the form of Carlo Ancelotti, Benitez and now Lampard, it’s been great seeing him thrive at the elite level.

Well on his way to fulfilling his enormous potential, the man who debuted all the back in 2017 for the Toffees is finally getting rewarded for all his hard work, patience and persistence.

While he’s set for an extremely bright future, the starlet’s immediate focus will be fixated on doing all he can to help Everton avoid relegation. A task that’s certainly easier said than done, but one that he’ll unquestionably relish.